The history of the Ford Focus RS: in pictures 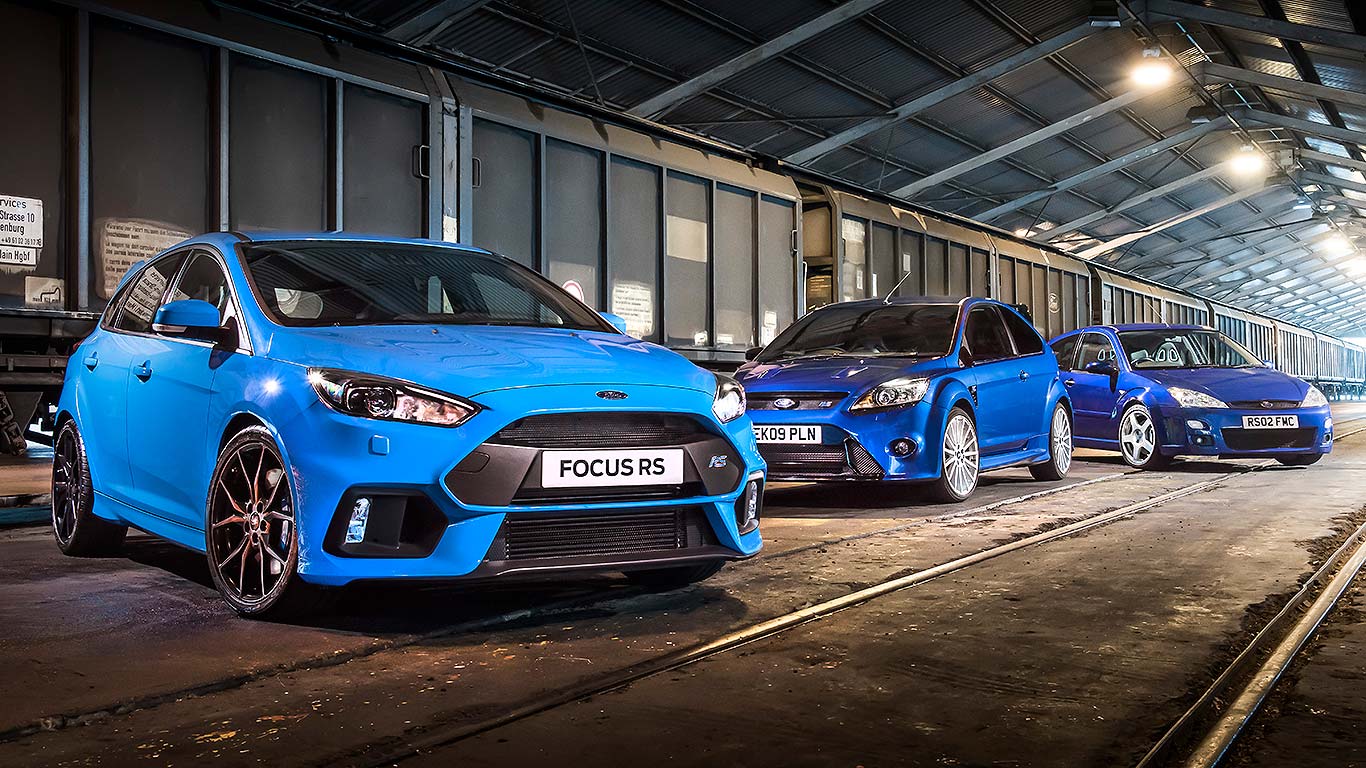 The Ford Focus RS returned in 2016 with more power, attitude and value for money than ever before. Now in its third generation, the modern day Ford Escort Cosworth is every inch the cult car classic you can now buy new again: here, we look back through the years at how the Ford Focus RS burst onto the scene and has evolved since. 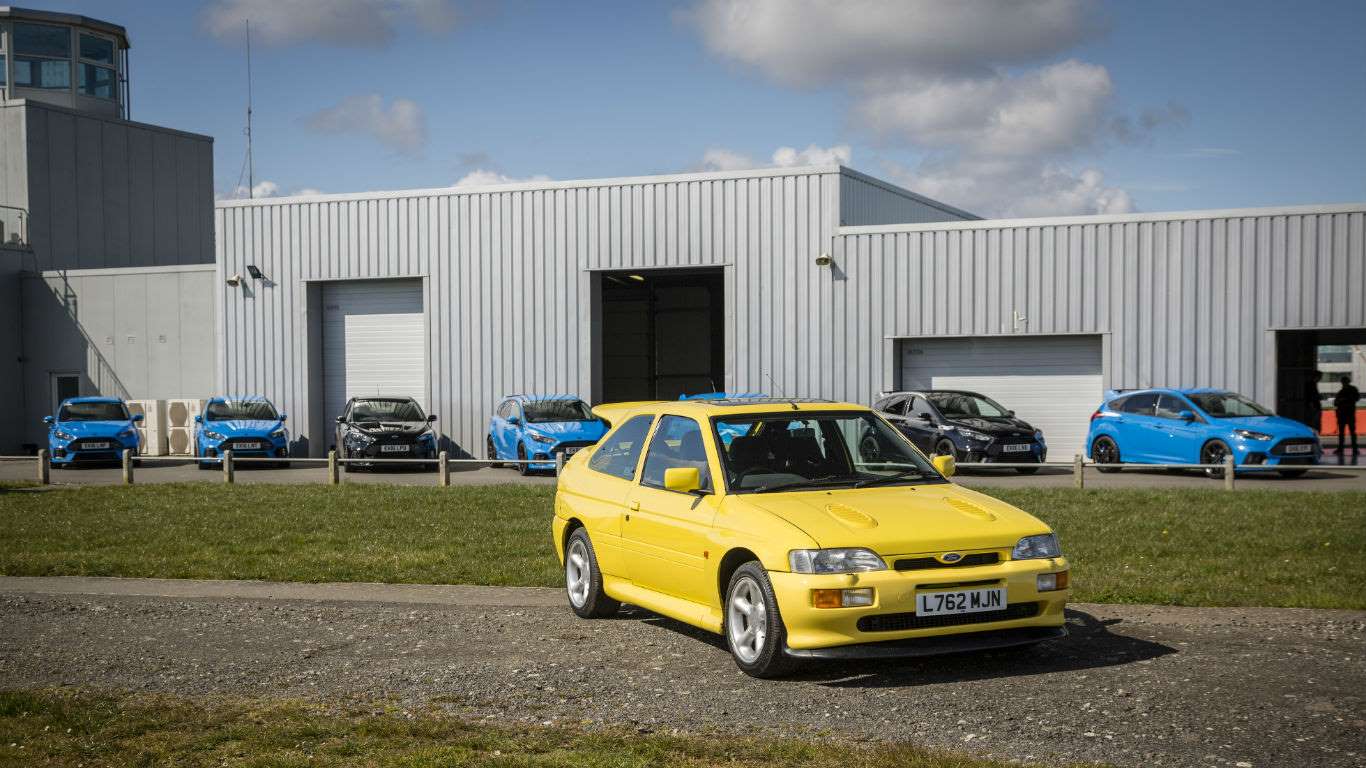 The rally-bred Escort RS Cosworth pre-dates the first Focus RS by a decade. With a turbocharged 2.0-litre engine and whale-tail wing, it became an icon of the era. This car, from Ford’s heritage fleet, was available to drive at the UK launch of the Mk3 Focus RS. 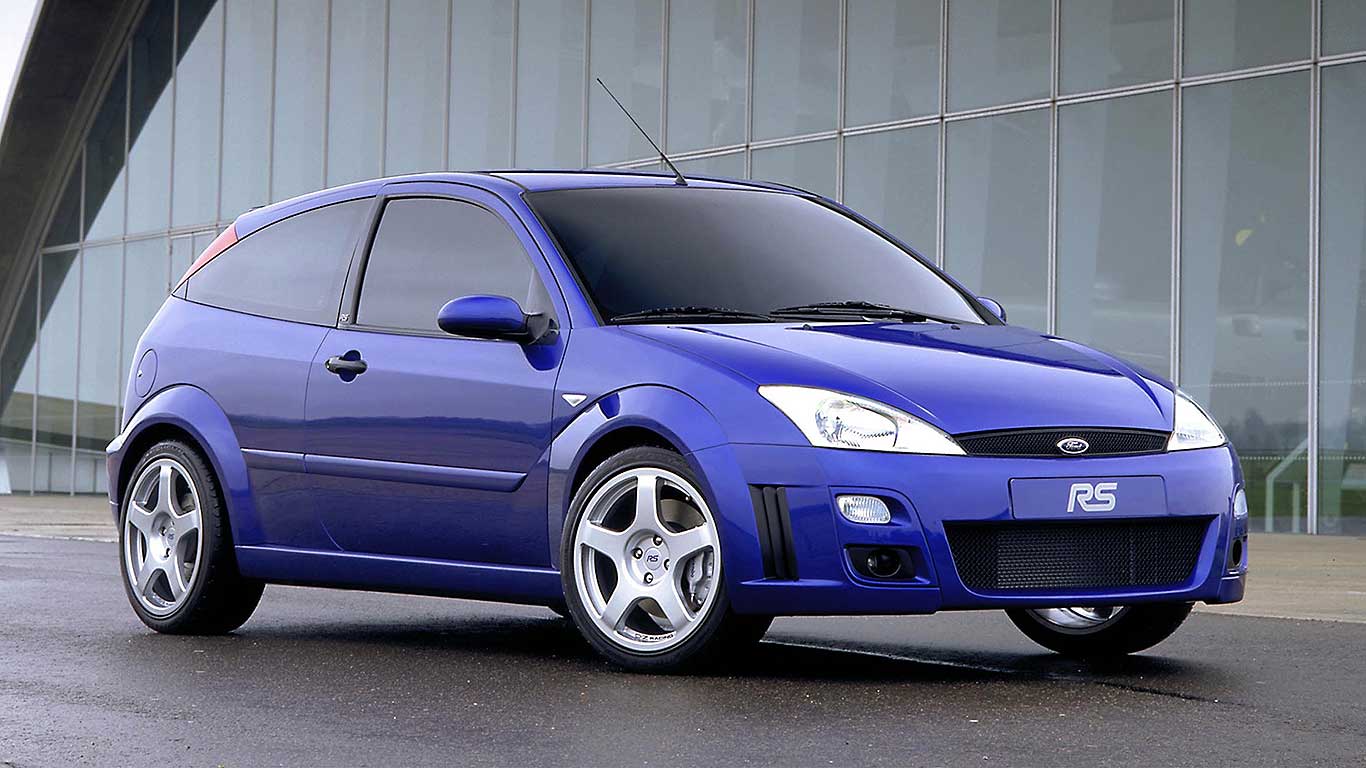 It all started back in 2002 with the Mk1 Focus RS. A long-awaited super-hatch, it was actually a year late when it was finally ready for launch (a trend we’d come to establish with the Focus RS) – but the wait was worth it…

The new Focus RS was a genuine crack engineering team special. It had a fired-up 215hp 2.0-litre turbo engine and a track-bred Quaife differential to deliver the fireworks to the front wheels.

By modern standards, performance isn’t exceptional, but it was impressive for its day: 0-62mph took 6.4 seconds and it could do 144mph.

Inside, the budget wasn’t there for full-on changes – even the steering wheel stayed the same and because Ford wasn’t able to fit extra dials, it swapped the temperature gauge for a turbo boost dial instead.

What Ford did do was deck the interior out in a rather alarming blue colourscheme, liberally deploying blue leather. Bold then, perhaps of slightly dubious taste to modern eyes…

Rather more impressive were the Sparco racing seats, with one-piece backs featuring cut-outs for race harnesses. Also note the green starter button mounted down by the bespoke metal gearlever (the gearbox only had five speeds).

The results were dramatic. For some, the Focus RS was simply too full on and unruly, but for people like your writer here, it was an absolute thriller – an intense, livewire buzz like no other front-wheel drive hot hatch. No wonder why, today, it’s a classic – helped by Ford committing to build just 4,501 of them. 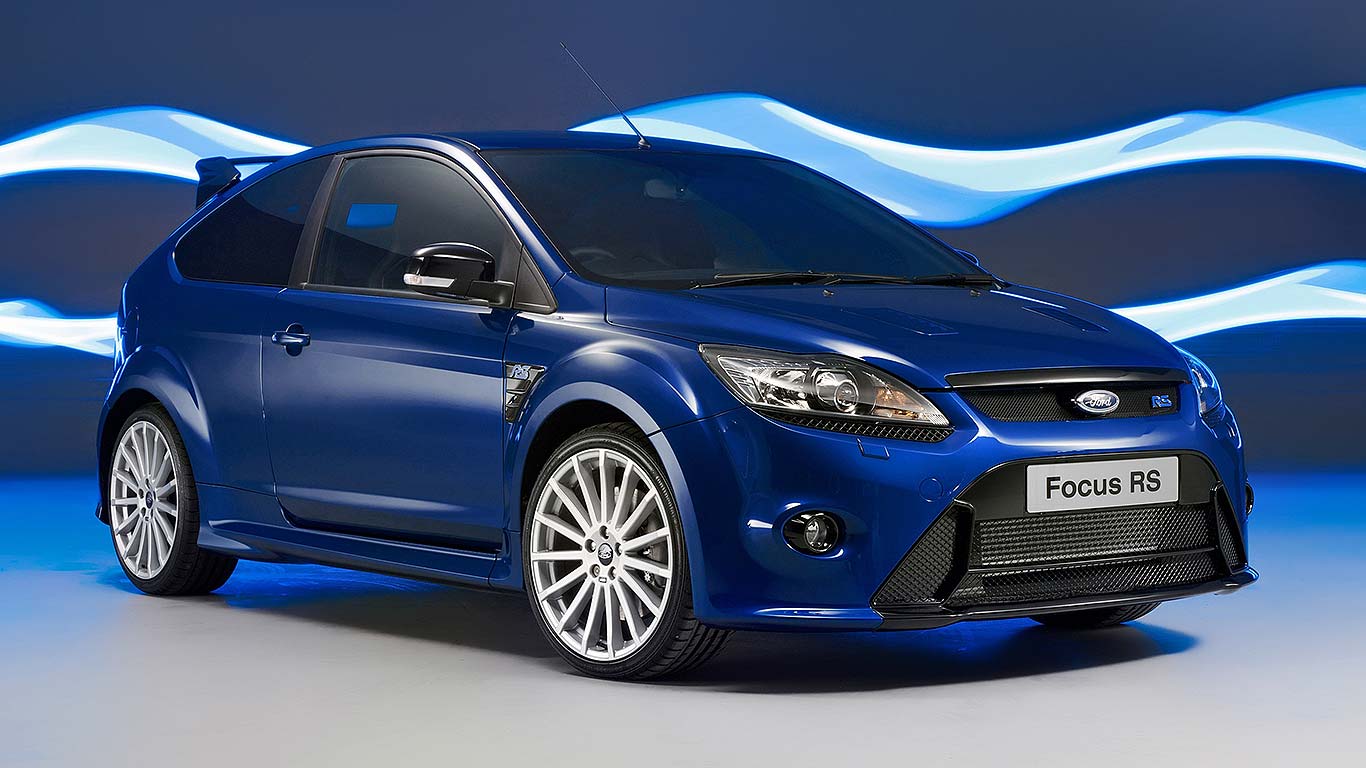 It was all change in 2008 with the global launch of the all-new Mk2 Focus RS at the British Motor Show in London.  The colour might have been similar but everything else was new…

The car’s fully-formed and more aggressive new looks were not just for show, either.

That’s because beneath the air vent-laden bonnet was a full-fat 2.5-litre five-cylinder turbo engine, producing a whopping 300hp! It didn’t have the Quaife differential to harness it: Ford instead fitted a revolutionary ‘Revoknuckle’ front axle to manage the forces.

Monster dual exhausts signalled this Volvo-sourced engine’s arrival, set within a prominent rear diffuser and below a teatray-like rear wing: yes, aerodynamics were all.

Not all blue anymore

The Focus RS was also available in colours other than blue – such as this blinding bright green that was actually the British Motor Show launch colour.

As if the colour wasn’t enough to ensure the Focus RS was noticed, Ford also got celebs such as England and Essex player Alastair Cook behind the wheel.

Those running the new Focus RS soon found it wasn’t the most fuel efficient car. Enter Ford putting it into the annual MPG Marathon. Overall eco miles per gallon? A rather unlikely 38.5mpg…

Others had different figures on their mind – namely, horsepower. Enter BBR GTI, which created a 380hp BBR RS380 that could do 0-62mph in just 5.6 seconds.

Graham Goode Racing was at it too: its tuned Focus RS Mk2 370 FR GGR…

… Cost £4,000 fitted and delivered a similar 0-62mph time – limited more by traction than actual power, said testers at the time…

Noting this tuning trend, Ford decided it wanted a bit of the action itself – so recruited semi-official works tuner Mountune to produce an MP350 kit. You can still buy this: it costs around £2k plus fitting.

In 2010, Ford launched a special edition Focus RS 500 with the Mountune kit as standard. As the name suggests, production was limited to 500, to mark the end of Focus RS Mk2 production. 101 them came to the UK. In total, Ford made over 11,000 Mk2 Focus RS – more than double the original car.

And no sooner had the Mk2 RS 500 landed in showrooms, it was gone, and that was that for the Focus RS. The Mk2 was replaced with the Mk3, Ford launched the hot ST – but no word at all on the RS version. Would the Focus RS end with the three cars pictured above?

Ford ummed and aahed for years – but in the background, the market was doing its own thing. Namely, prizing Focus RS immensely. Retained values rocketed – Britain still loved the Focus RS, which perhaps got Ford thinking… could the world love it too? 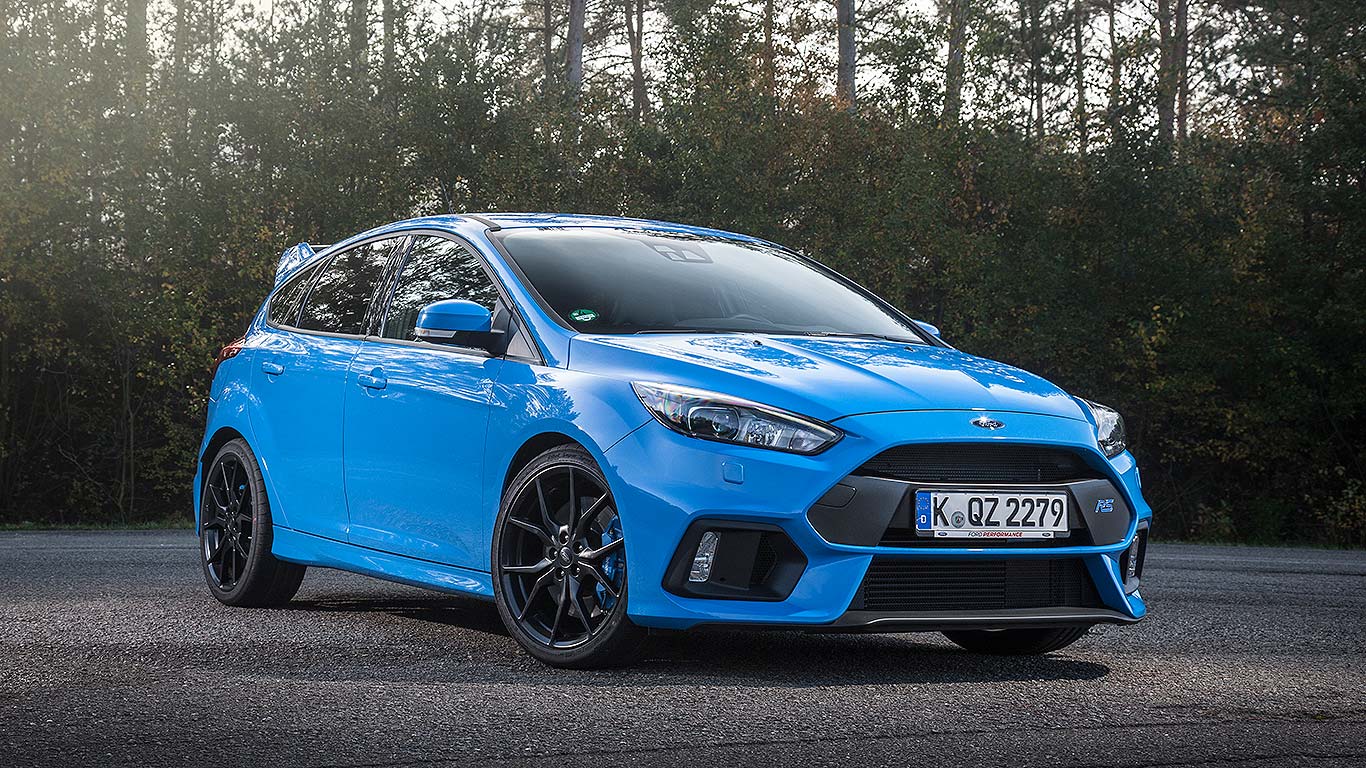 In late 2014, the third-generation Focus RS was finally confirmed. Now five-door only, it’s a little less bespoke than the original models on top, but really is the real deal beneath.

The Focus RS Mk3 doesn’t actually have any bespoke body pressings, unlike earlier models. This means it lacks a little of the bulging wheelarch drama, but also means costs have been kept down…

… Which is how Ford is able to charge an astonishingly affordable £29,995 for the new Focus RS. Why astonishing? Because this is no less than a 350hp, 165mph super-hatch – with a breathtaking 0-62mph time of just 4.9 seconds! Sensibly, it’s now all-wheel drive too…

It’s also a Ford Focus RS that, for the first time, will be sold globally, not just in Europe. Again, this is a key part of both the model’s viability and its affordability.

Ford’s doing this by selling the Focus RS under its Ford Performance sub-brand – this even stretches to it only being sold through a more limited number of specially-trained expert dealers.

It means buyers in the United States will officially get the Focus RS for the first time.

Ford’s significantly re-engineered the motor to cope with the extra firepower it produces (and give it a 6,800rpm redline). It may not have five cylinders anymore, but it still growls, pops and bangs like a muscle car, promises Ford…

The Focus RS gets yet another fantastic set of Recaro seats, the most sculptural and torso-hugging yet.

The interior is largely as per the Focus ST, but with RS trimmings and materials (and a flat-bottom steering wheel). No point going too bespoke here; it would push the cost up unnecessarily.

The extra dashtop dials as seen on the Mk2 Focus RS appear on the new model; again, naturally finished in RS blue.

Ford’s spent big on the Focus RS’ components, from these Brembo brakes (they can generate 1.2g of braking force!) to the 20-inch alloys concealing them. Ford offers a lightweight alloy wheel on the options list, and fits Michelin Pilot Super Sport tyres; again, Pilot Sport Cup 2 semi-slick rubber is optional. 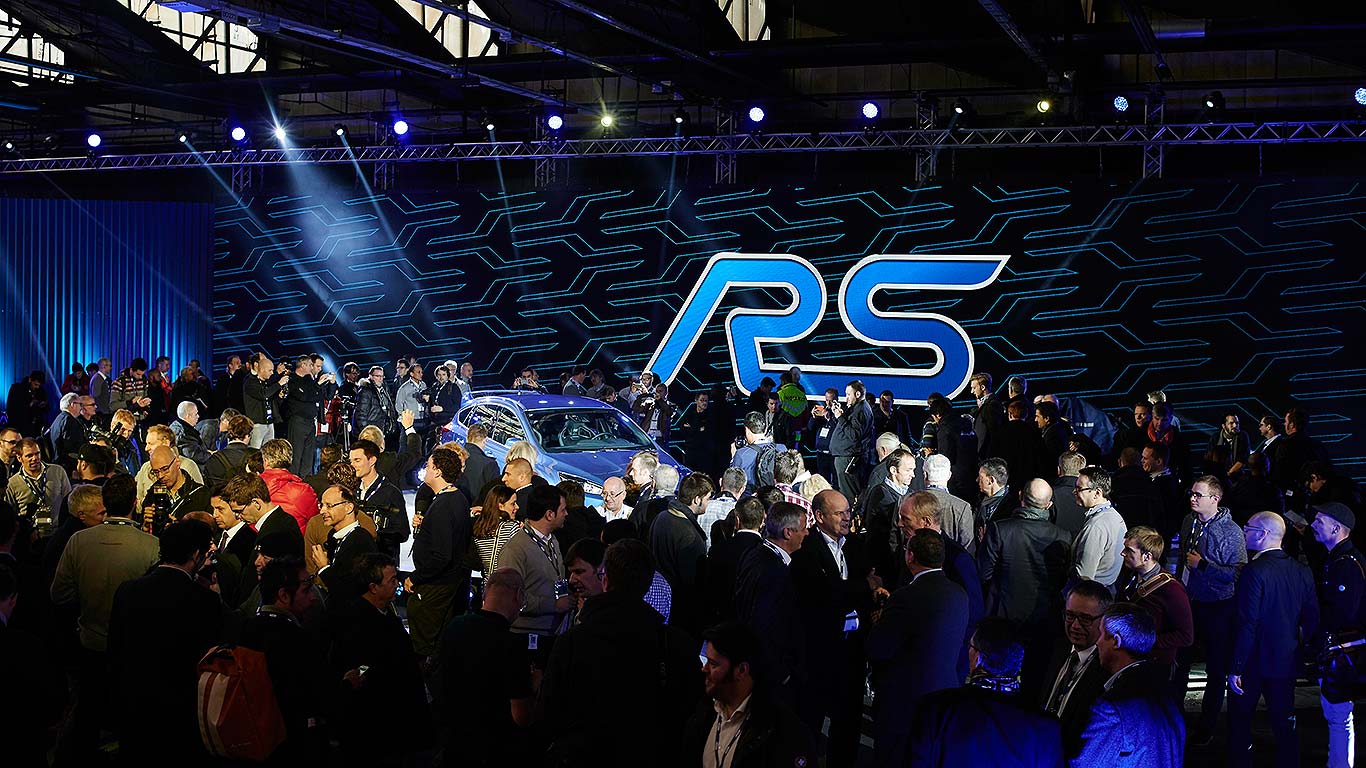 Ford revealed the Focus RS Mk3 to the world on February 3 2015, at a huge extravaganza in Cologne. It rolled out many RS from the brand’s back catalogue…

… Before revealing the new car itself in some style. And with celeb assistance…

… From the hoonigan himself, Ken Block! It is no coincidence the new Focus RS thus has a special drift mode stability control system…

Block also later gave the Focus RS its dynamic debut at the Goodwood Festival of Speed 2015. Many sets of tyres were consumed.

The Stig also had a drive but, for obvious reasons, we don’t know what he thought of it.

The new Focus RS certainly has the potential to be a modern classic though, not least because it’s a genuine all-wheel drive model using a fully mechanical system.

The Focus RS Mk3 has dynamic torque vectoring too; 70% of drive can be sent rearwards, and up to 100% can then be diverted to an individual wheel. That’s how it’s able to drift seemingly so brilliantly.

Indeed, even in the early standard-looking development models, this appears to have been something Ford was concentrating carefully on!

Although many of the body panels are shared, the Focus RS has super-enlarged air intakes at the front end to deliver the necessary cool air to the engine and brakes. Even compared to the ST, it oozes attitude.

Although it’s a global Focus RS, development of the new model has still been concentrated in Europe. The team behind it insist it hasn’t gone soft.

The most hardcore Focus RS yet?

Indeed, the new Focus RS could well be the most hardcore and attitude-fuelled model yet – even more so than the bombastic original.

Only around half of UK drivers own their car outright. It seems the era of ownership is coming to an end
Read more
Car News

A classic Aston Martin DB6 Vantage, regularly used by Prince Charles when his own Aston was being repaired, could be yours.
Read more
Car News

One in two young drivers feel pressured by other motorists, so Co-op is trialling T-plates to help those with telematics insurance feel safer.
Read more

All British Gas vans will be electric by 2030

Energy supplier British Gas has pledged to replace its existing fleet of 12,500 vans with all-electric versions by the end of the next decade.
Read more
Car News

Retro electric: Morris is back, with an electric van

The classic Morris J van is returning, albeit in looks alone, as an electric commercial vehicle. The JE is a ‘21st-Century re-imagining' of a classic
Read more