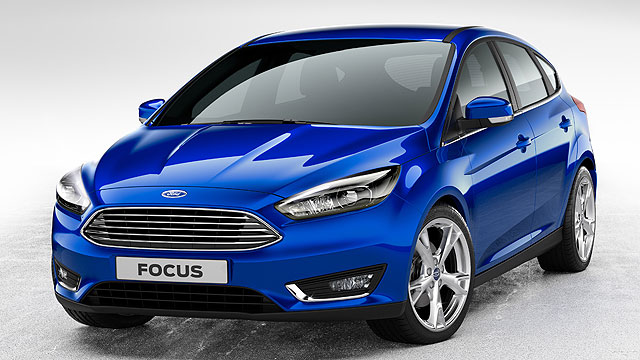 Ford has revealed a facelifted new Focus at the Mobile World Congress in Barcelona ahead of its Geneva 2014 debut.

The heavily updated Focus boasts an extensive range of updates outside, within and underneath. The move is intended to reinforce the car’s ‘world number 1′ status (1.1 million were sold last year alone) and also address a slightly lukewarm reception in Europe to the current model.

The most obvious update is the adaptation of Ford’s latest Aston Martin-style grille, bringing it in line with the facelifted Fiesta and imminent new Mondeo. There’s a reprofiled bonnet with smart dual contours, refreshed rear end with thinner tail lamps and more use of chrome throughout. 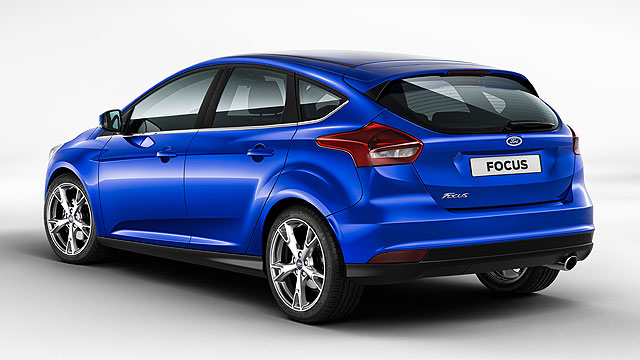 Inside, the messy button-packed interior of the current car has been improved; Ford doesn’t show how the standard model looks but the improved Sync 2 infotainment setup, with 8-inch colour screen, appears more straightforward.

There’s more black satin and chrome, fewer buttons on the steering wheel and, says Ford designer Martin Smith, “a clear customer desire for more simplicity inside the car” is addressed. 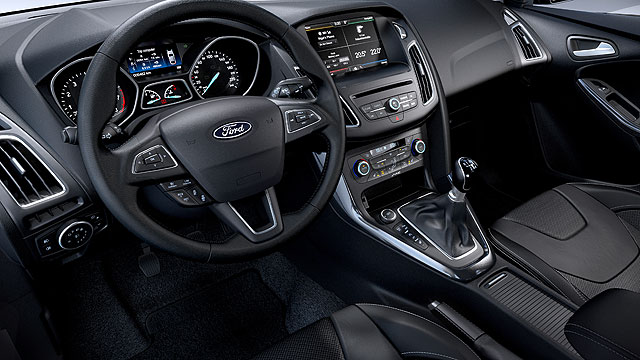 Ford has introduced a new 1.5-litre Ecoboost engine into the new Focus, replacing the current 1.6-litre Ecoboost. There are two versions, producing 150hp and 180hp; the gem-like 1.0-litre Ecoboost, chosen by one in three Focus buyers, remains in 100hp and 125hp guise.

Joe Bakaj, vice president, product development, Ford of Europe. “The new 1.5-litre EcoBoost petrol engine will directly benefit from technologies pioneered by the 1.0-litre EcoBoost – including an entirely new cylinder head design with improved cooling and integrated exhaust manifold for best possible performance and fuel efficiency, and reductions in weight and friction of both internal components and accessories to help deliver a more economical, smoother-running and freer-revving engine.” 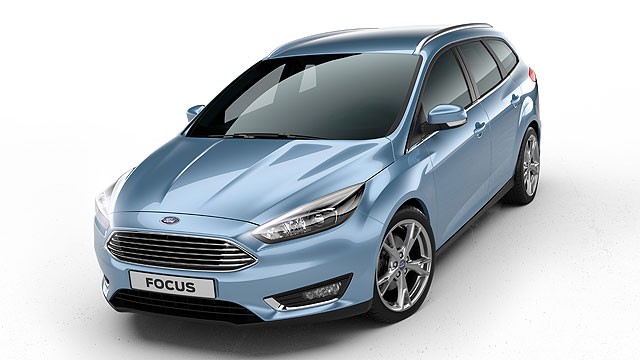 The non-turbo 1.6-litre remains an entry-level 85hp and 105hp offer; choose it as a Powershift dual-clutch auto and Ford boosts it to 125hp.

Ford hasn’t told us how green the new 1.5-litre TDCi Ecoboost is; will it beat the VW Golf Bluemotion? It has, however, revealed a new 1.0-lotre Ecoboost Econetic becomes the first non-hybrid family hatch to emit less than 100g/km CO2.

A Ford wouldn’t be a Ford if it wasn’t dynamically exceptional. The latest Focus hasn’t been, though – so Ford’s done plenty here to improve things.

Overall front end structural stiffness has been improved to boost solidity, responsiveness and the connected-to-the-road feel, says Ford. The sideways stiffness of steering-relevant suspension bushes has been upped and the dampers have been retuned. There’s retuned software for both the electric power steering and ESP system – oh, and overall suspension geometry has also been revised.

This has all been done, says Ford encouragingly, to enhance handling and steering. Anticipation is high… 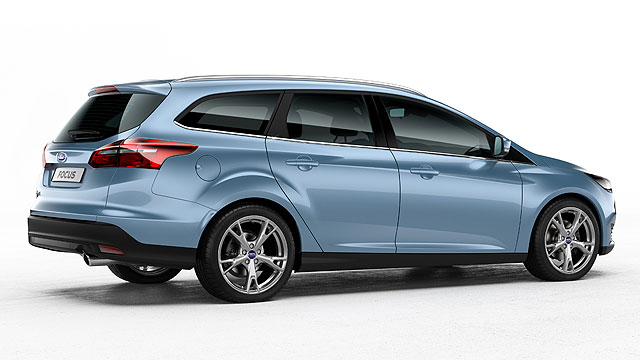 A surprisingly emotive Ford of Europe, Middle East and Asia president Stephen Odell said: “We weren’t satisfied with being No. 1; we wanted to blow people away with a stunning new version of the Focus.

The new Focus goes on sale in the second half of 2014: MR will be at the Geneva Motor Show next week to check it out up close.

Will the new Focus help bring an end to tailgating? It includes a new Distance Alert system: set an ‘ideal’ distance from the car in front and it glows from grey to red, them bleeps, if you get closer than this. Admirable. Although committed tailgaters will just turn it off…

At slow speed, Ford’s Active City Stop now works at up to 50kph to auto-brake if the driver doesn’t. At higher speed, the new Pre-Collision Assist has a greater detection range and, again, will bleep warnings then apply the brakes if it detects danger.

The new Focus will be quieter on the move, thanks to some impressive detail engineering: thicker carpets and better engine bay soundproofing keep noise at bay, and Ford has even fitted thicker side glass.

The programmable Ford My Key first seen in the Fiesta now features on the Focus. It allows parents to cap the car’s speed and stereo volume, stop deactivation of safety systems and even not move at all if the seatbelts aren’t buckled.

The bi-Xenon Adaptive Front Lighting system auto-adjusts headlight beam angle and intensity between one of seven settings, according to ambient light, vehicle speed, steering angle and distance to the car in front. It also adjusts main beam at higher speeds for better visibility and lights up corners when driving faster.

Ever struggled to park in a regular parking bay? Help is at hand: this feature auto-reverses into spaces next to other cars. Park-Out Assist will help them drive out again, and Cross Traffic Alert keeps an eye out for other traffic up to 40 metres away.

New Sync 2 now has a split-screen display, can speak street names and incorporates the Michelin Travel Guide. Voice recognition is better: drivers can issue one-shot navigation instructions and tell it to “play” a particular artist. We love this one: press the voice control button, say “I’m hungry”: and the nearest restaurants will be listed…