Ford Fiesta at 40: happy birthday to the UK’s favourite car 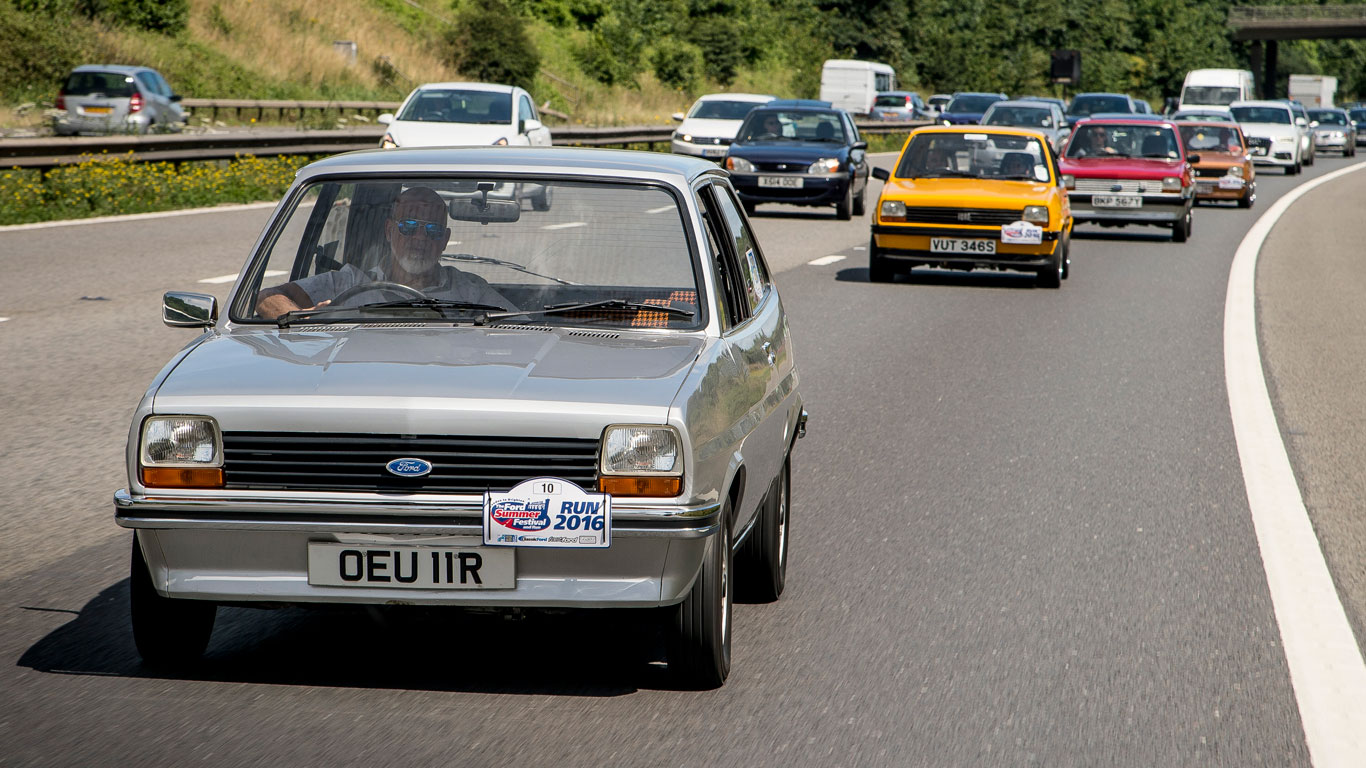 The humble Ford Fiesta holds a special place in many of our hearts. Whether it was the car we learned to drive in, or our first brand new car, or even the first hot hatch we owned, many of us will have some special connection with the hatchback originally codenamed ‘Bobcat’.

Launched in 1976, the Ford Fiesta is 40 years old this year. Over that time, Ford has sold more than 4.3 million Fiestas in the UK alone – with more than one in every 20 cars sold during that time being a Fiesta. Every month for the last seven years it has topped the charts as the UK’s most popular car. And in 2014, it replaced the Escort as the UK’s best-selling car ever. 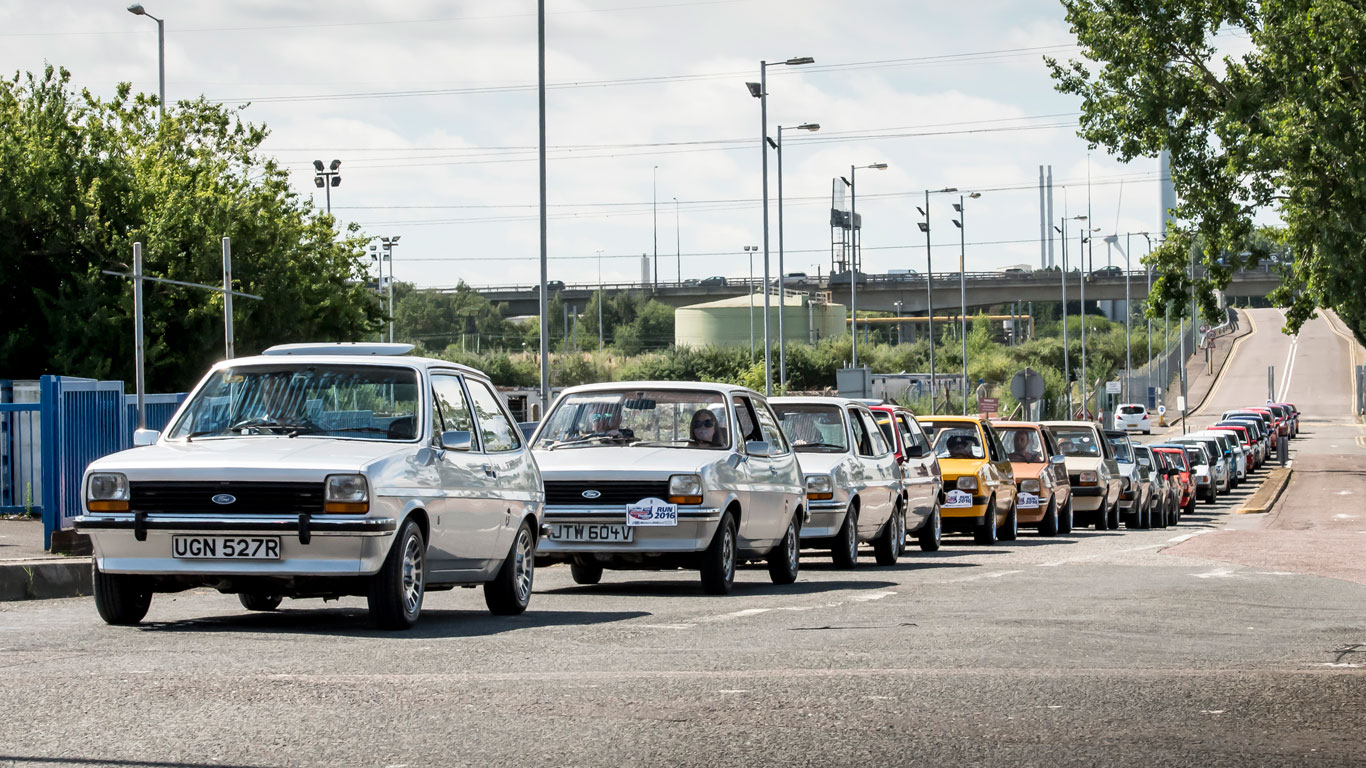 It’d be wrong for a significant birthday of the UK’s favourite car to pass by unnoticed, then. So Ford arranged a special shindig, in the form of a convoy (of 40 Fiestas, natch) from its Dagenham plant in East London, to this year’s Ford Summer Festival, held at Brighton Racecourse. A Fiesta fiesta, if you will. 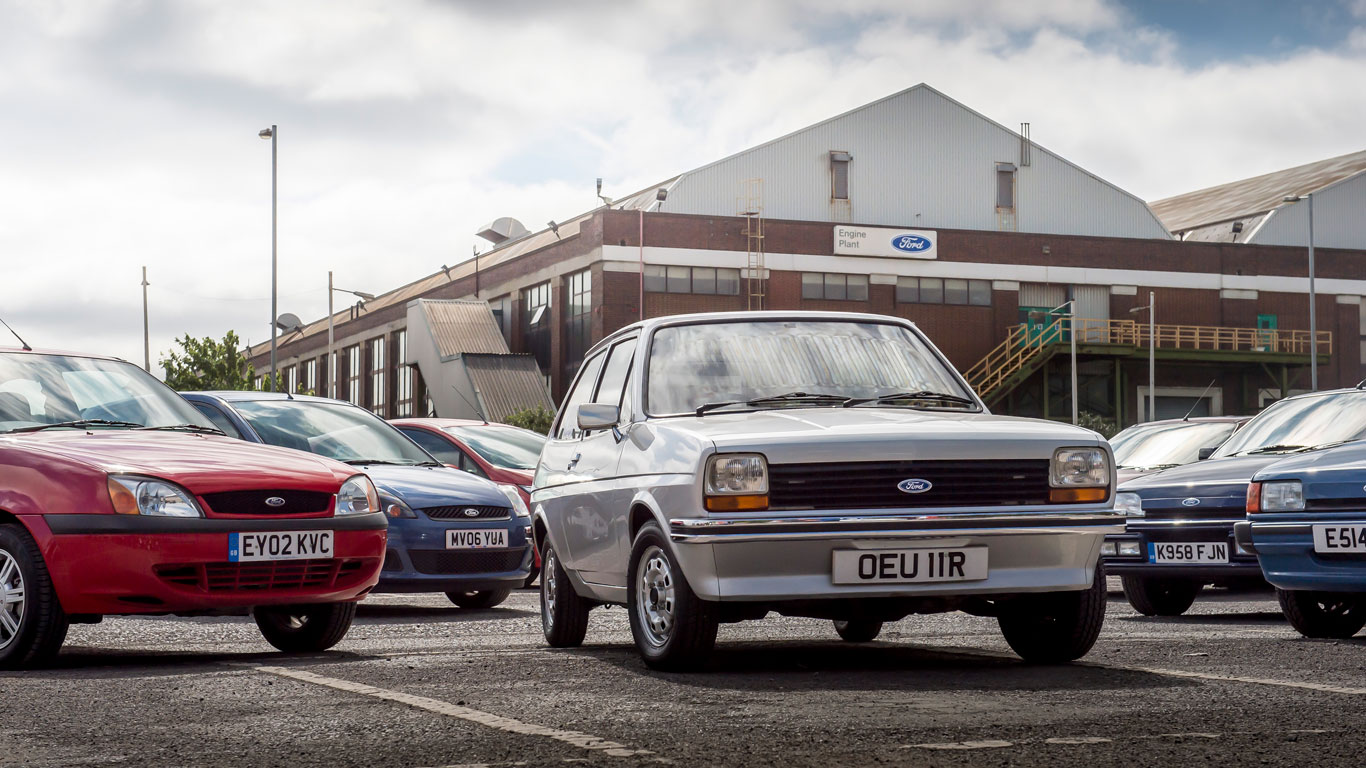 Ford invited us along, with the promise that they had something extra special lined up for us to drive on the run. We’ll come to that in a moment, but first a bit about Dagenham, where the run was starting. Although the plant no longer produces cars, more than a million engines are made there every year. It’s the largest producer of Ford diesel engines in the world. 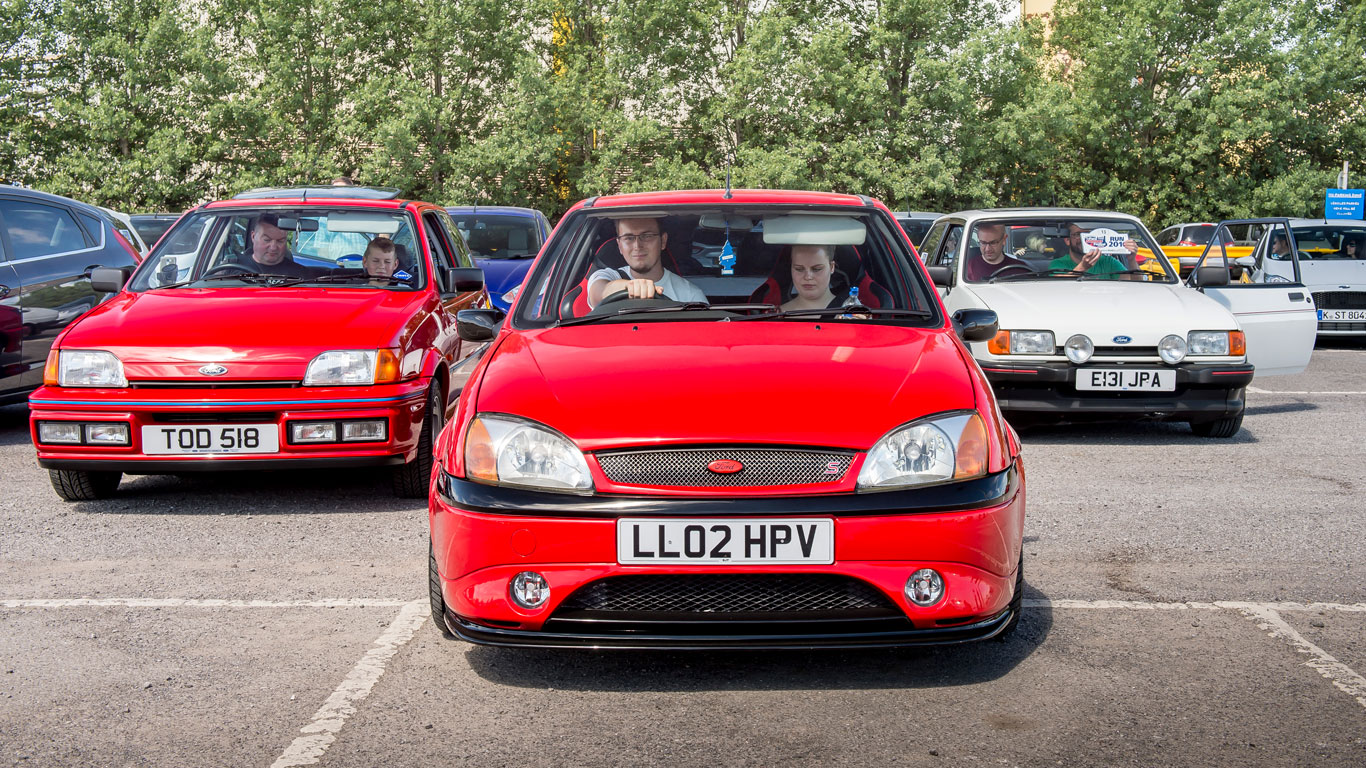 Although the Fiesta has been built at several plants around the world, it’s been a constant at Dagenham. In fact, it was the last car made there, with the final one rolling off the production line in 2002. For many of the cars on Saturday’s run, they were going ‘home’. 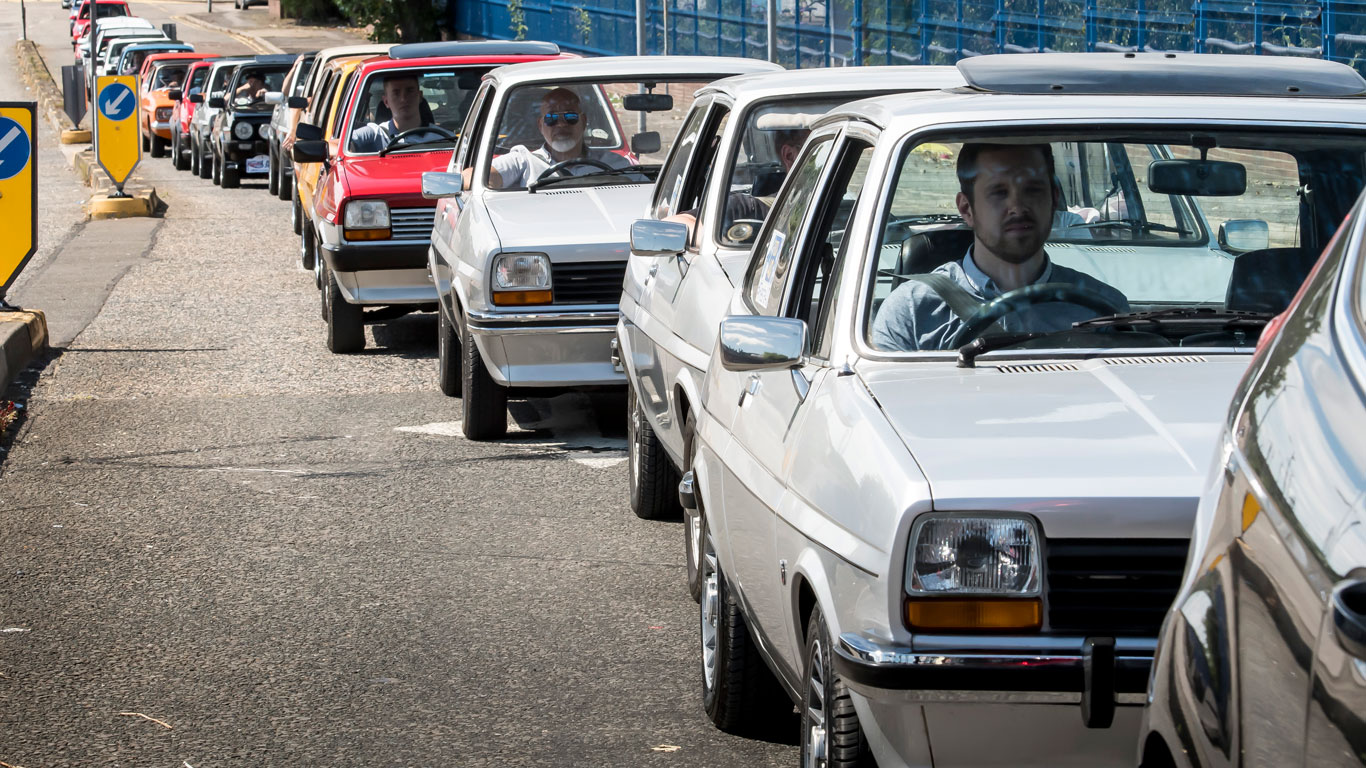 So, back to the run. A total of 40 Fiestas gathered at the site, from original Mk1s to brand new sixth-generation models, fresh off the production line. Although some were owned by Ford, many were driven there by enthusiasts, keen to take part in the Fiesta’s birthday celebrations. 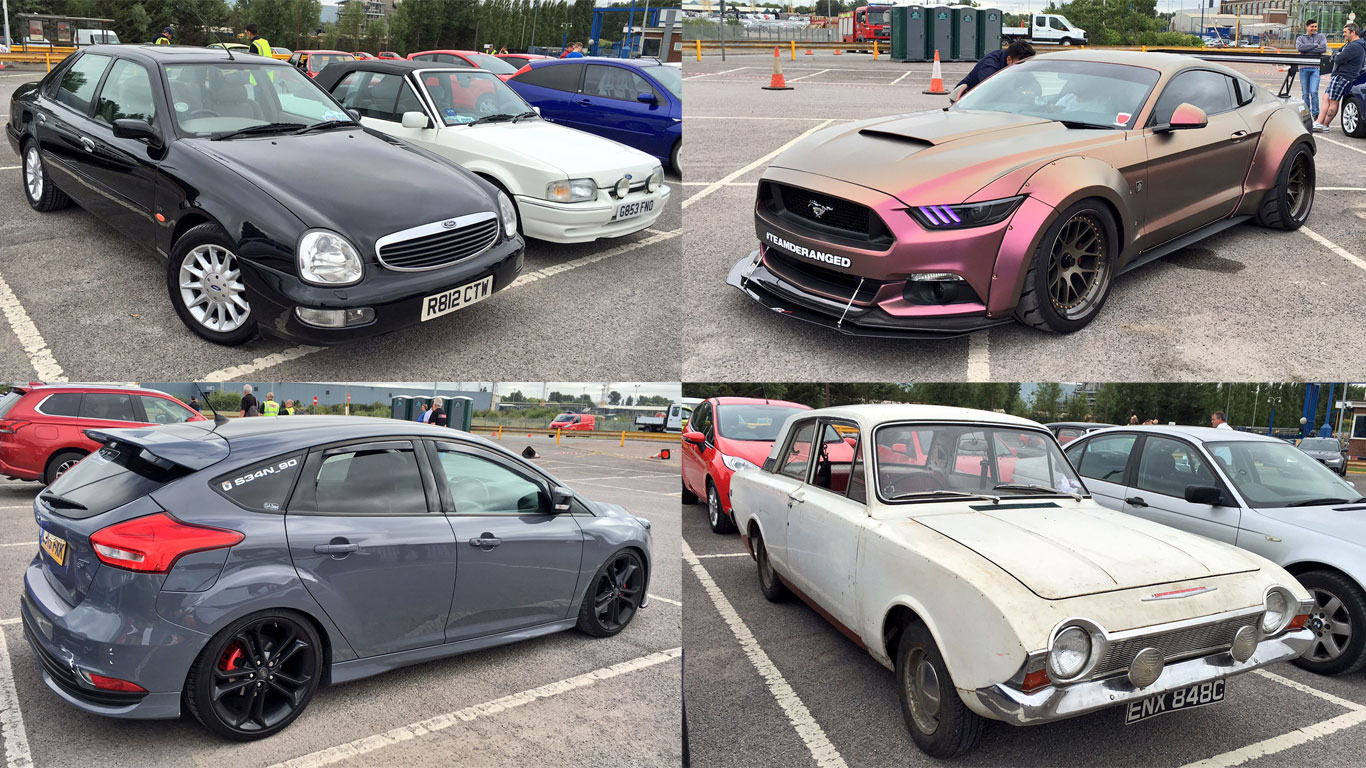 We’ll get to the Fiestas taking part in the run – of which there were some very special examples. But first, check out the entourage: from a rare two-door Corsair to a near-mint Ford Scorpio Cosworth. 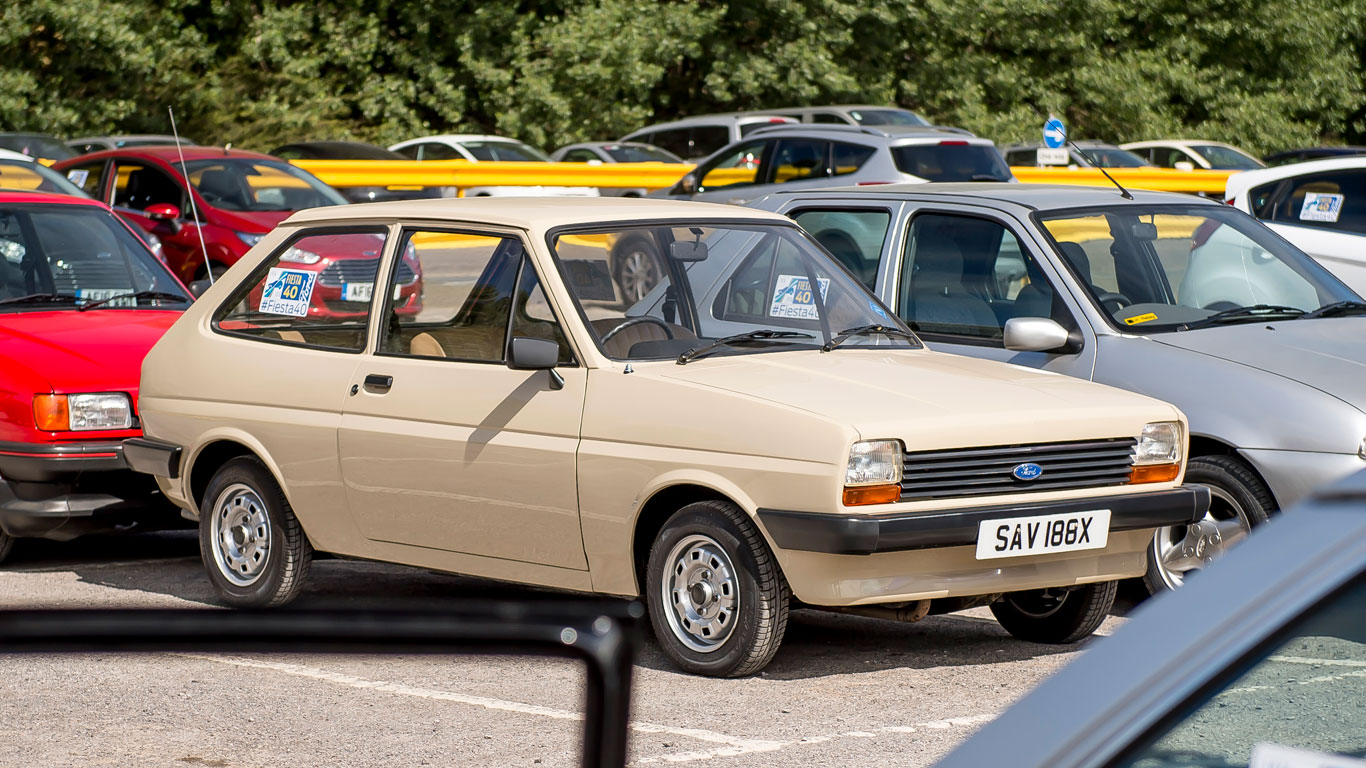 This was our steed for the run. It’s a 1981 Mk1 Ford Fiesta Popular, part of the manufacturer’s heritage fleet. Finished in fetching beige, this Fiesta would have been the cheapest way into Ford ownership when it was new. You could have parked one on your driveway for just £1,856 – as long as you could manage without such luxuries as carpet and a passenger door mirror.

Engine and performance (or lack of) 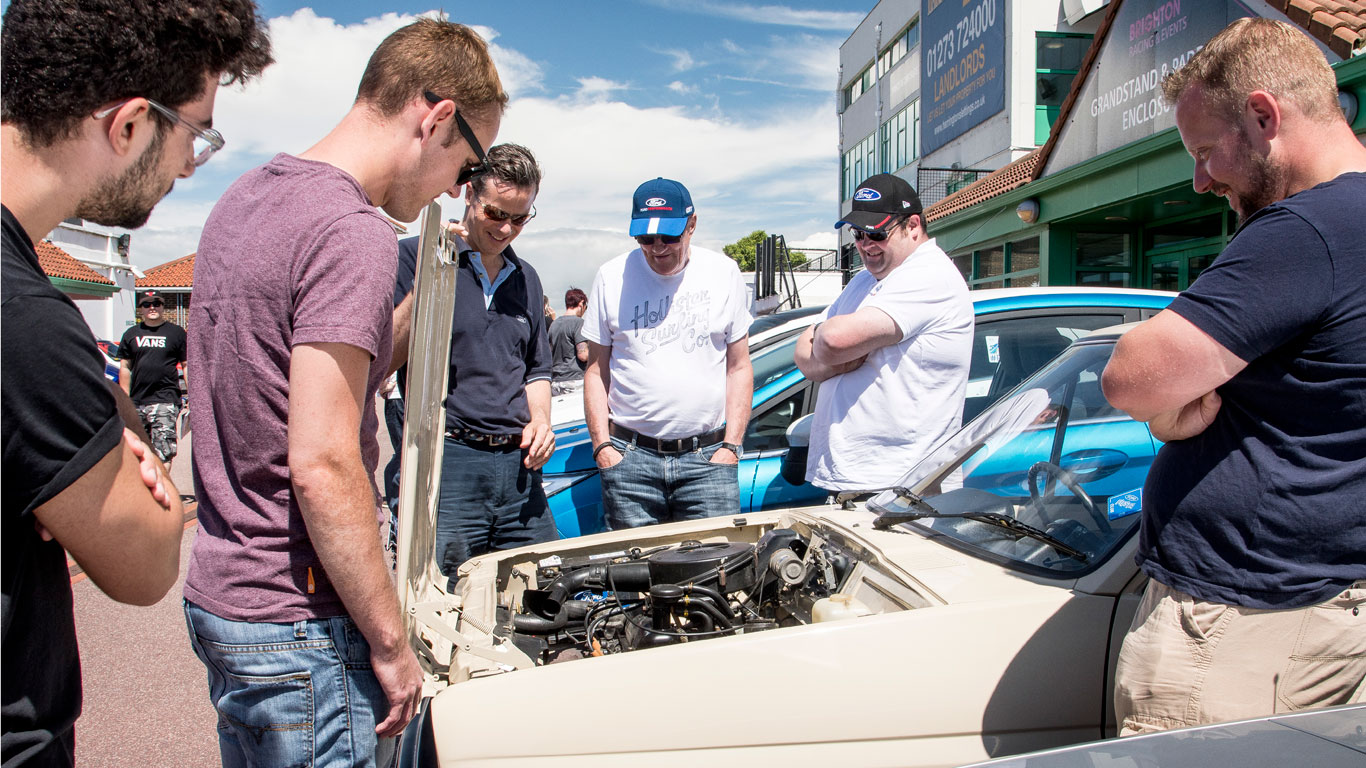 Powered by a 950cc engine, the entry-level Fiesta packed 45 hp when it was new, and would return 47.9 mpg at a constant 56 mph. Restored by Ford after it was donated by the widow of former Fiesta GB Club secretary, Andy Steele, today’s it’s in near-mint ‘as new’ condition.

Heading out of Dagenham towards the A13 dual carriageway and eventually the M25, the convoy of Fiestas received an awful lot of respect. In an area where van drivers are usually urging you out of the way at every opportunity, the Fiestas got nothing but smiles and thumbs up. There’s a lot of love for this little car. 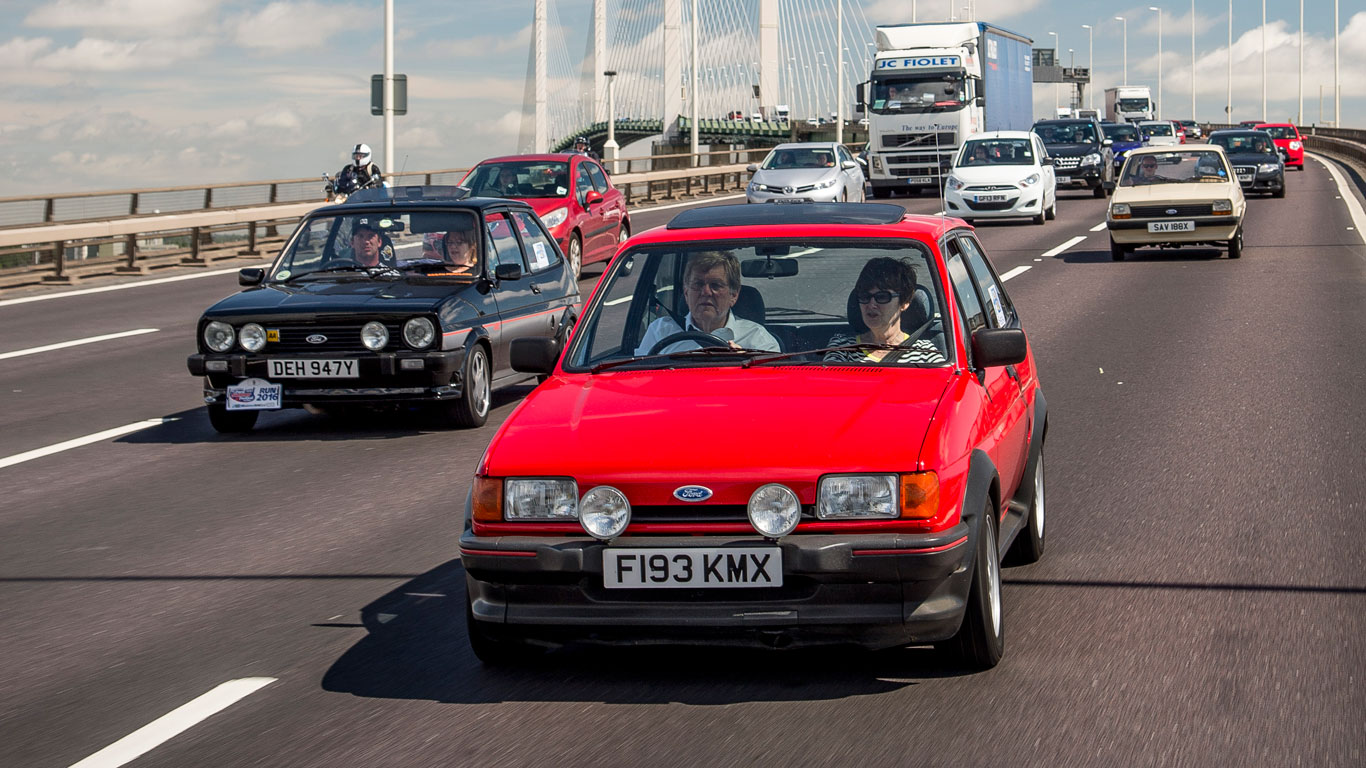 Following Autocar’s Steve Cropley in a Fiesta XR2i, the beige mean machine has no trouble settling into a cruise of around 60mph on the M25. 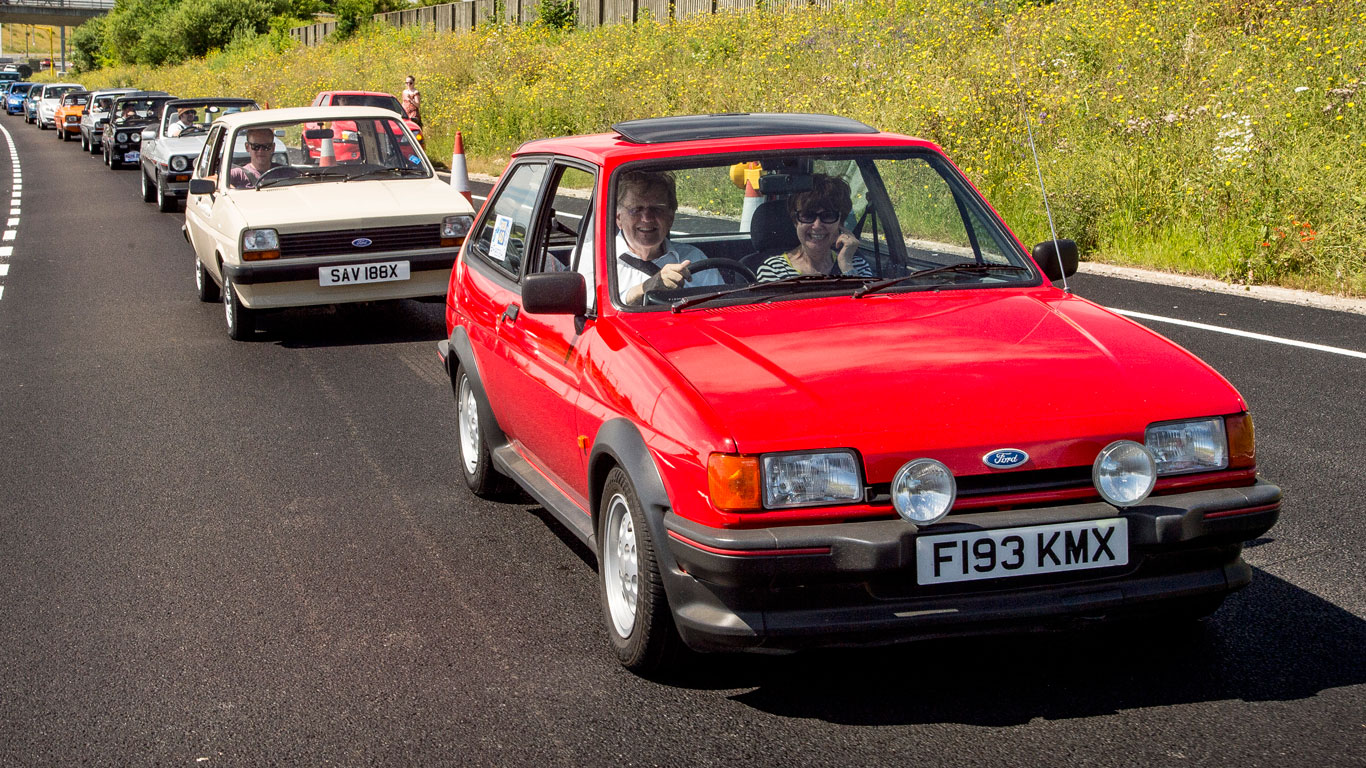 On the entire route there’s only one temporary breakdown: a Mk5 Fiesta Zetec S was spotted stranded in roadworks early on in the route. I later discovered it was diagnosed as a faulty air-con compressor, so turning the A/C off cured it. Maybe they’d feel some sympathy for me in the air-con-less Mk1. 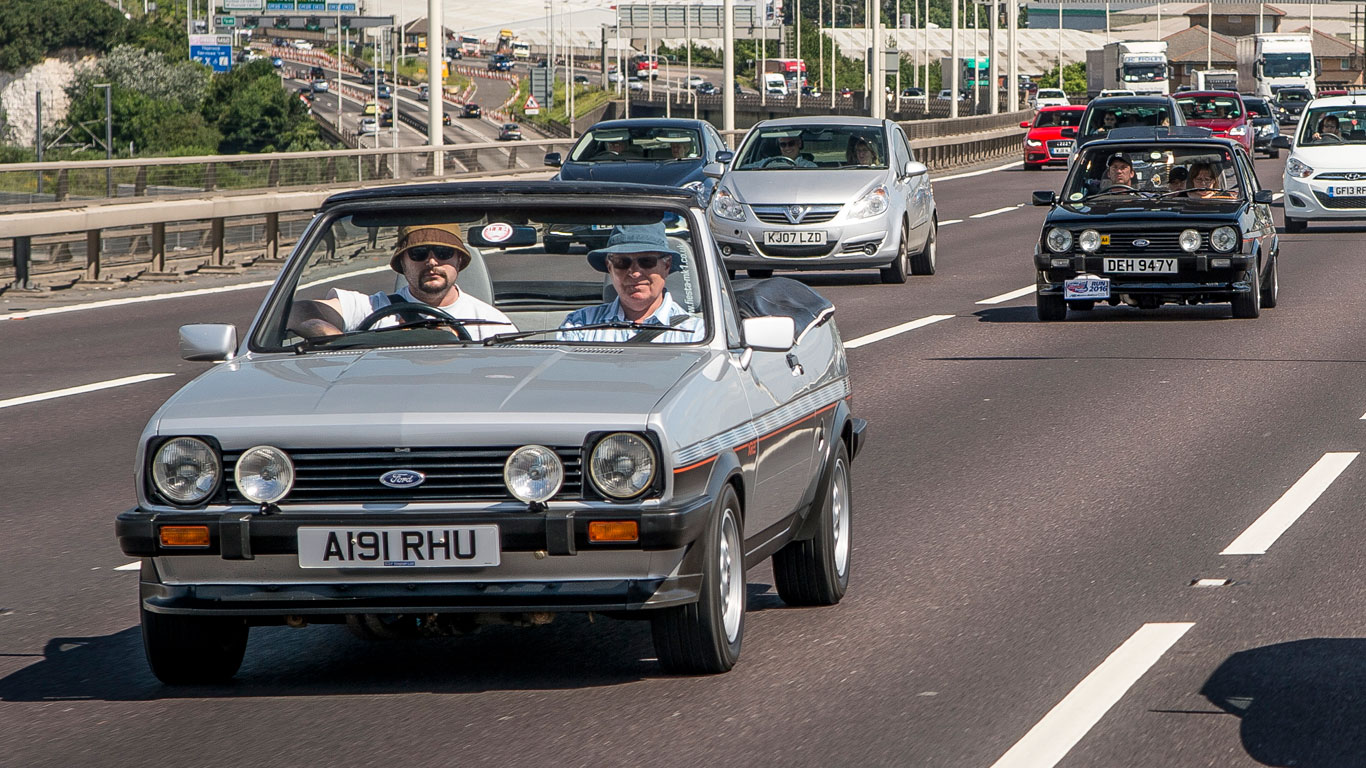 Other highlights include this XR2 ‘Fly’, a rare convertible created by Crayford. With a list price of more than £8,000 when new, it sold in very small numbers – making it very desirable today. 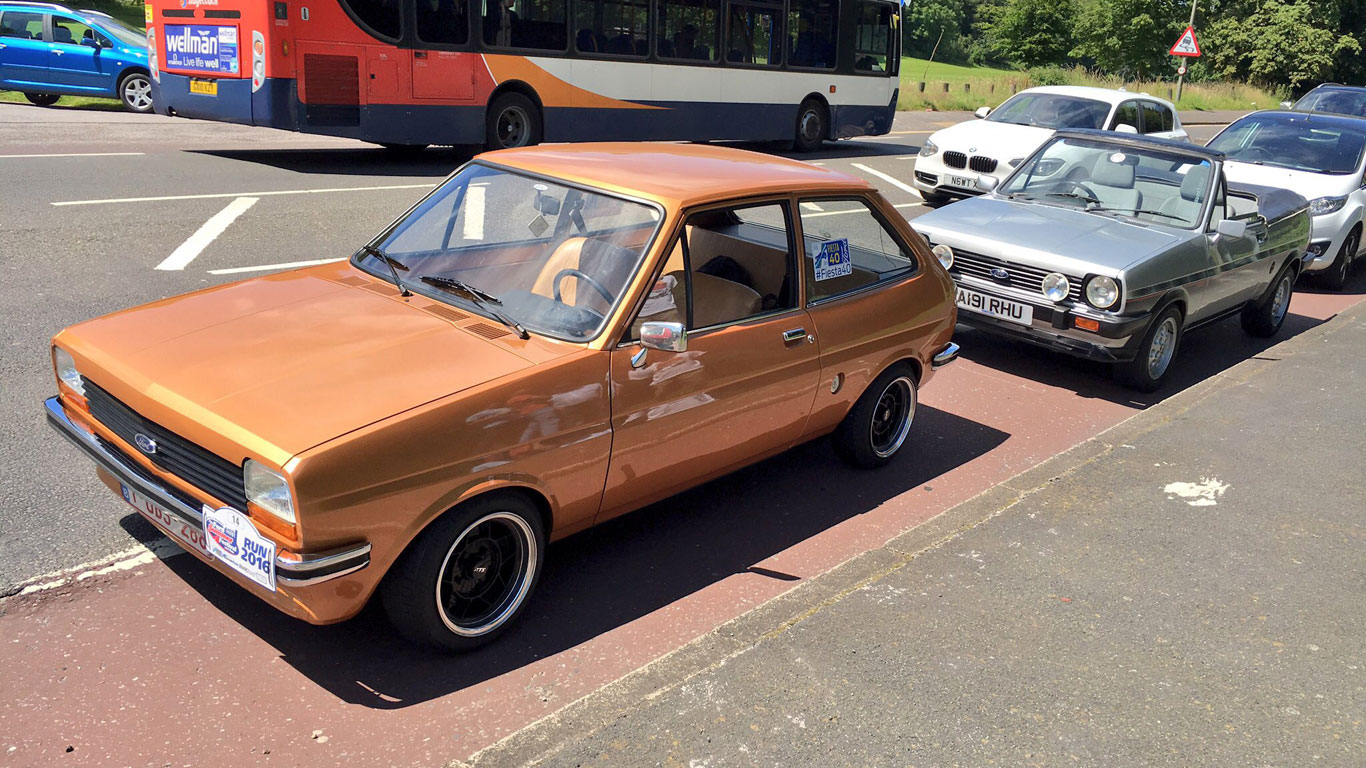 This stunning bronze Mk1 was driven all the way from Belgium for the event. 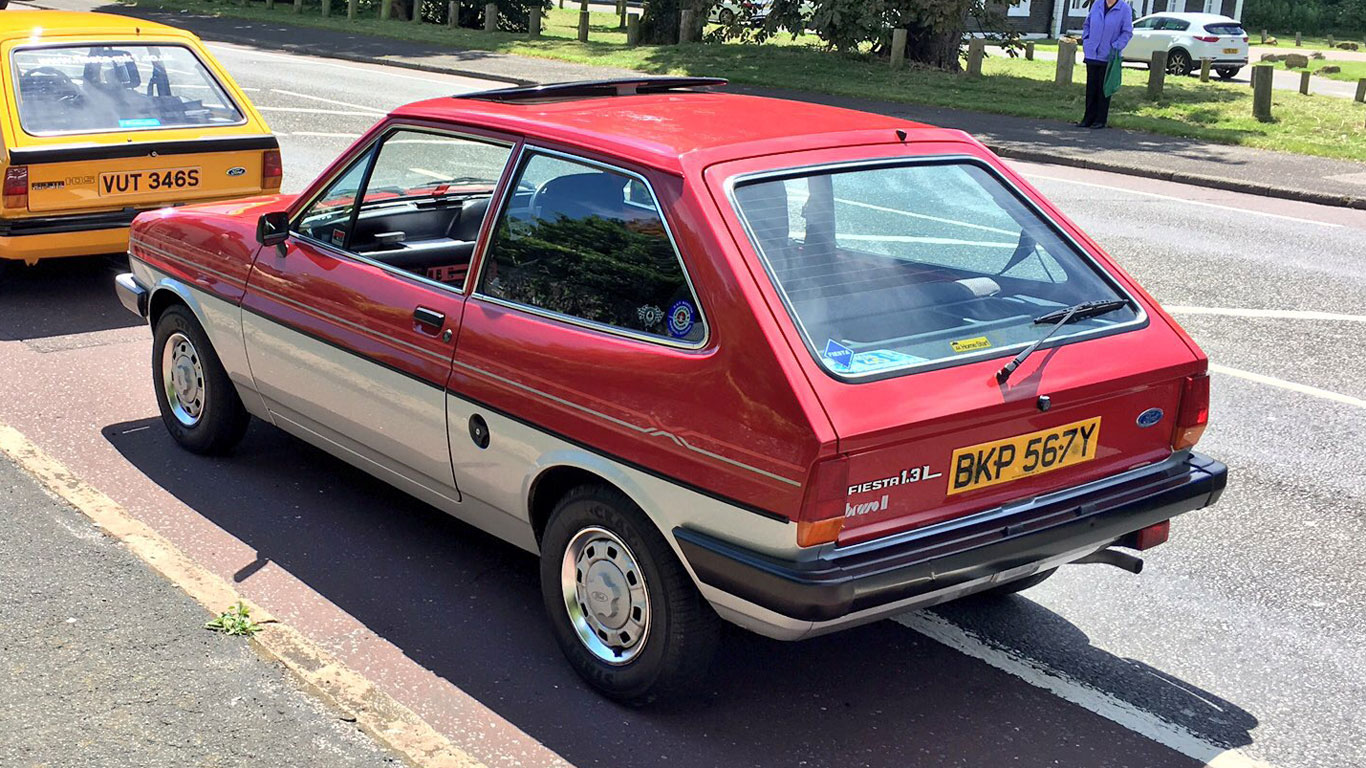 As special editions go, this certainly ticks the ‘special’ box. Based on a Fiesta L, the Bravo 2 added chrome window surrounds, a silver grille and wheel centre caps and, of course, the two-tone paint job. ‘Bound to make you feel good,’ the brochure claimed in 1983. We can’t dispute that. 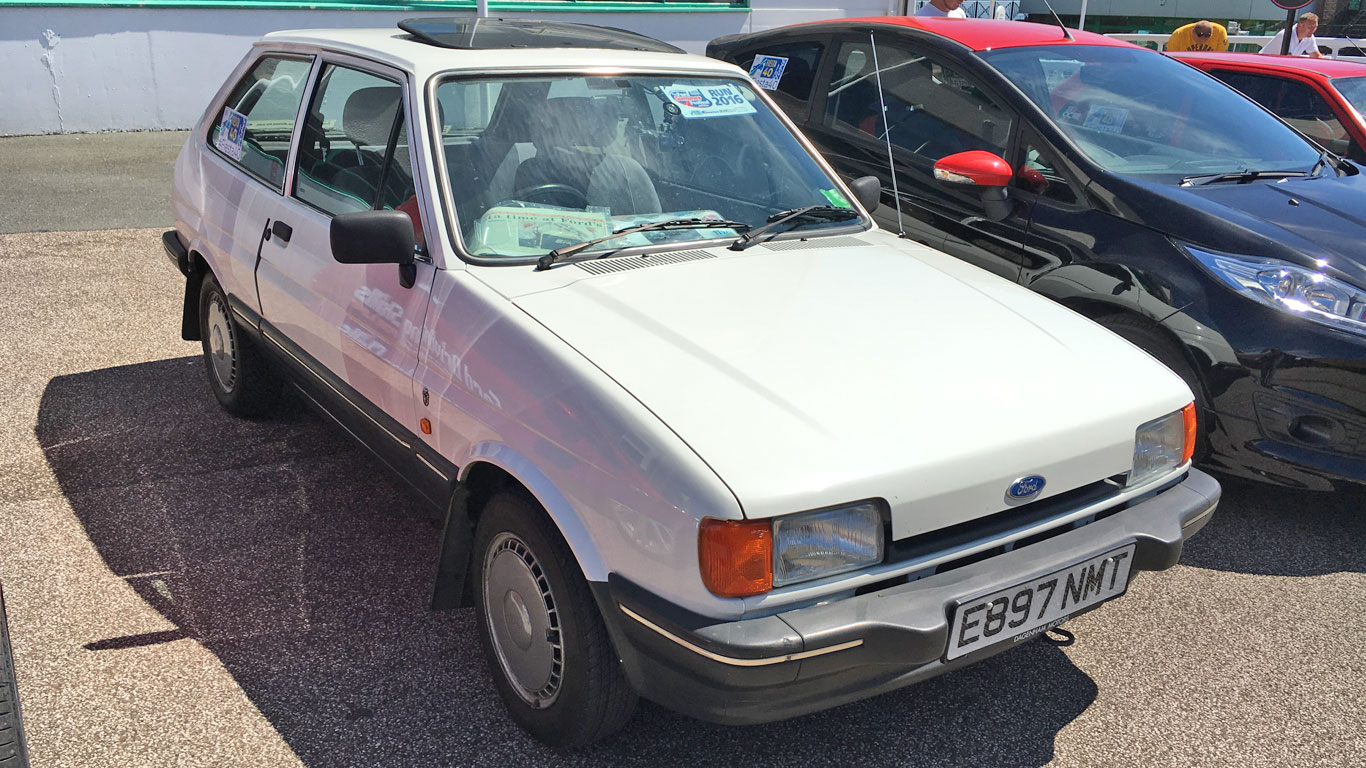 The Mk2 everyone wanted: a Ghia! With its crushed velour interior and plastic side mouldings protecting the exterior, the world knew you were doing well if you bought a Fiesta Ghia. 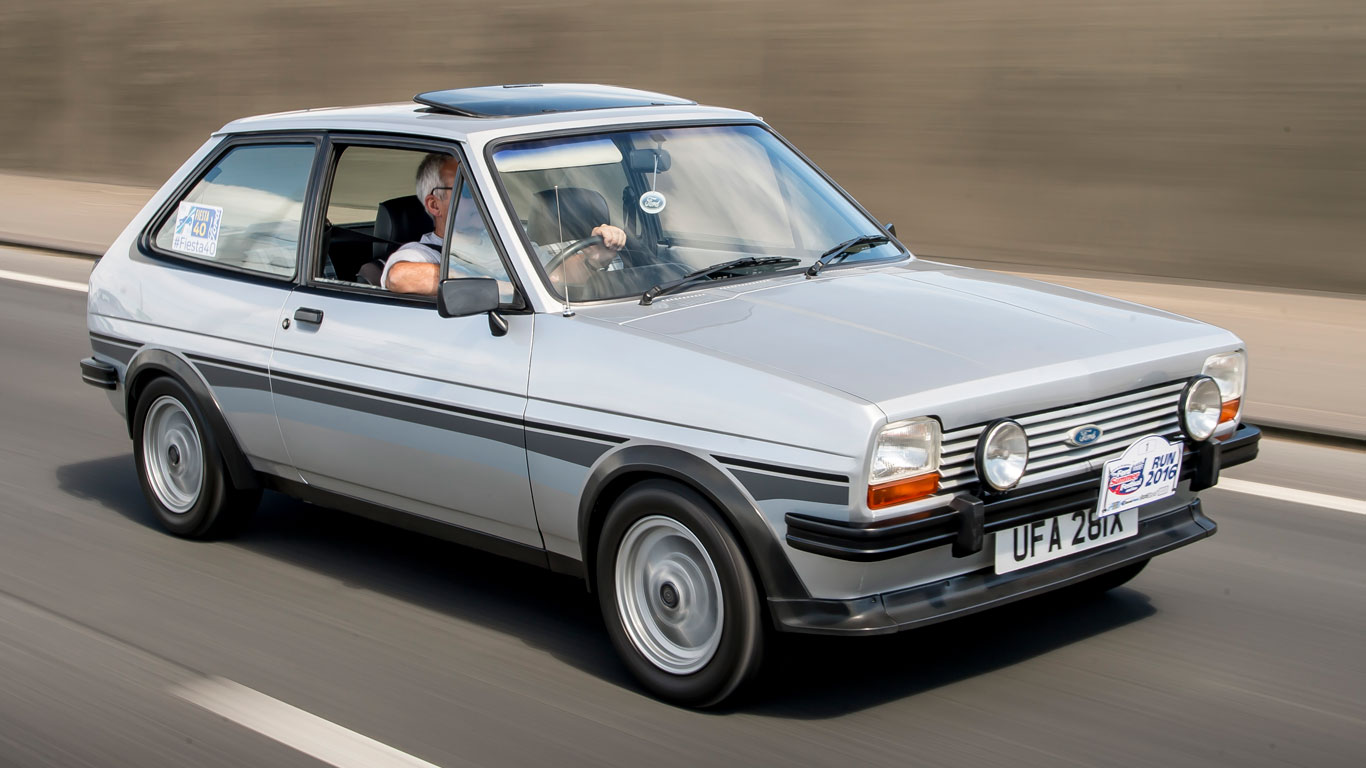 The 1.3-litre Ford Fiesta Supersport arrived ahead of the XR2, effectively testing the market for a hot Fiesta. Based on the 1300 Sport, just 3,000 were built. It’s very desirable today. 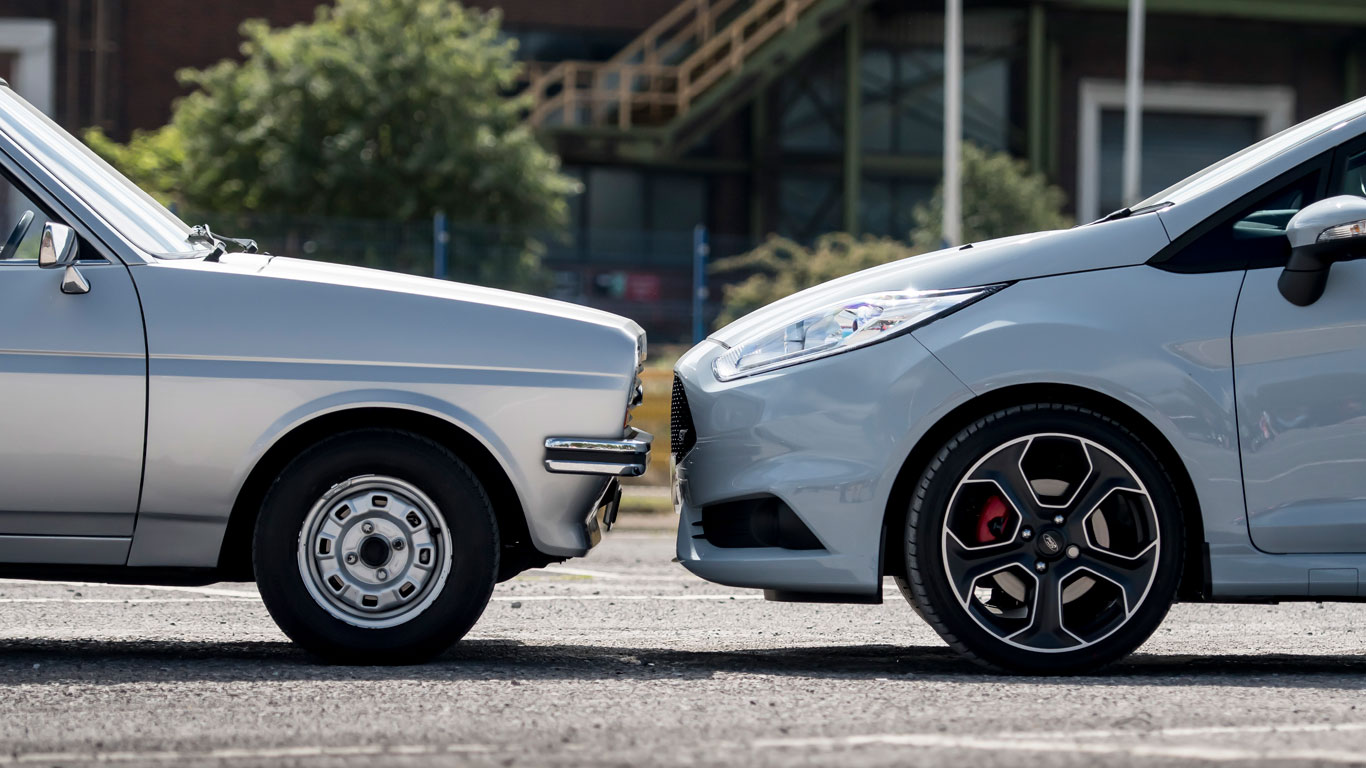 It wasn’t all old Fiestas: Ford was showing off its hot new ST200 on the run. We had the pleasure of driving it for the return journey. 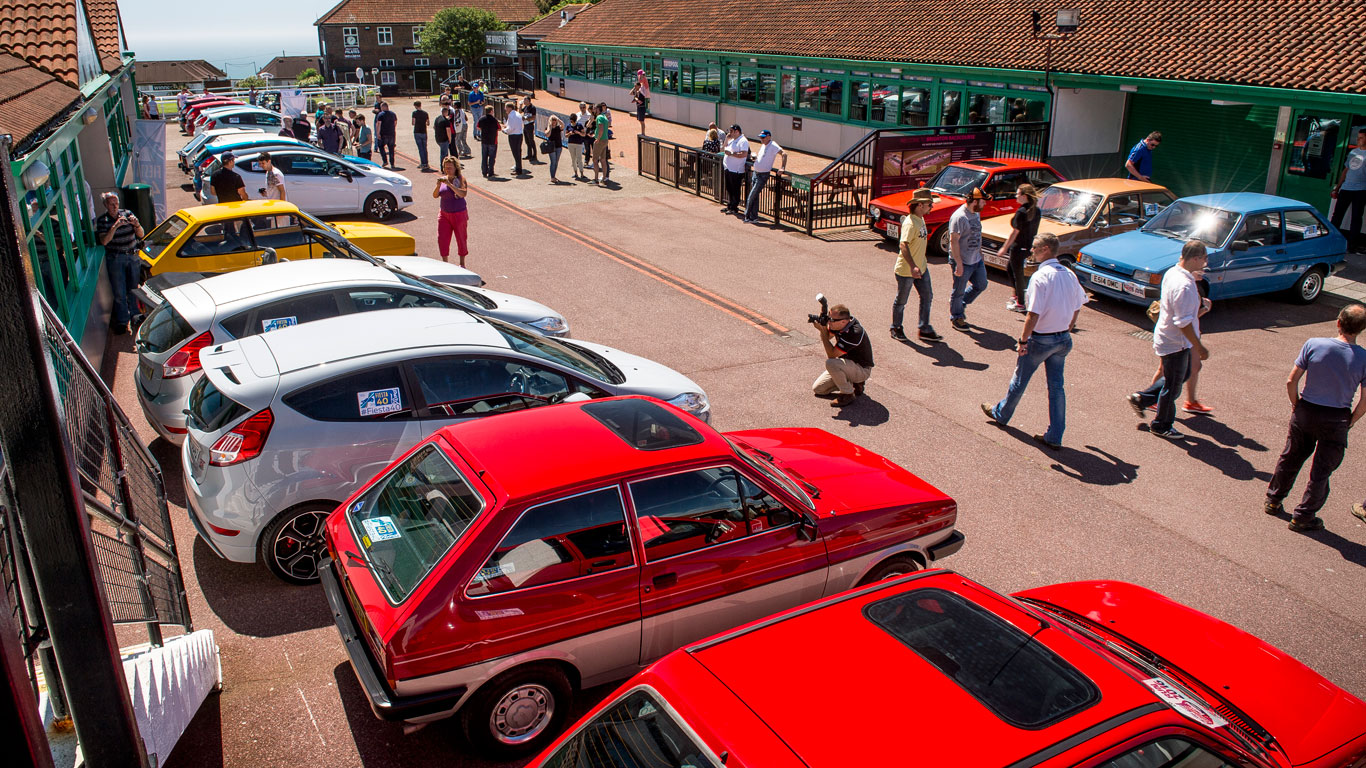 On arrival at Brighton Racecourse, the convoy was ushered into the show where the cars were on display for the public to enjoy. 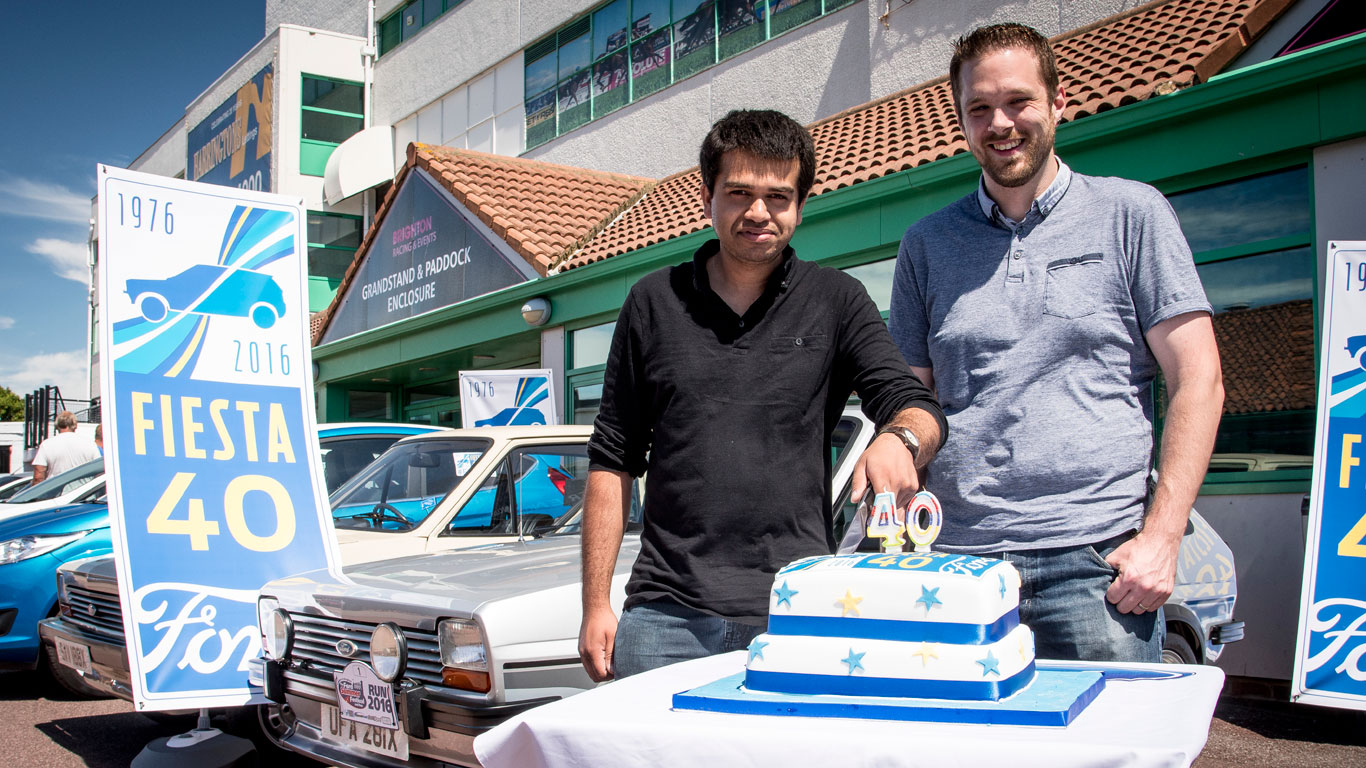 There was even a birthday cake cut to celebrate 40 years of the Fiesta.

The Honda e Prototype is almost ready for production. We get behind the wheel of a virtually showroom-ready model to find out what it’s like.
Read more

Car accessory chain Halfords says it will waive the fee for rebooking an MOT test if customers need to self-isolate due to coronavirus.
Read more