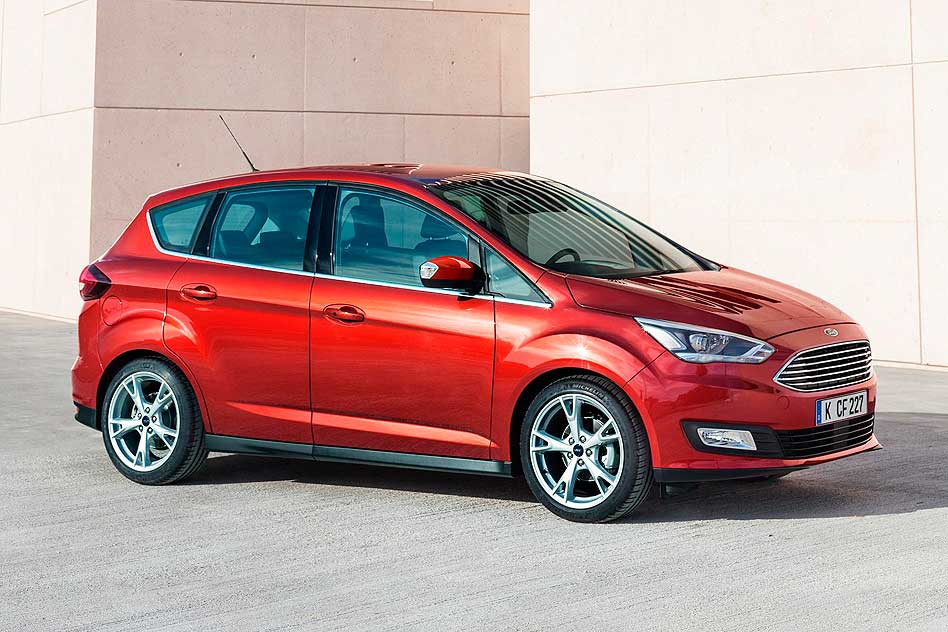 The Ford C-Max and Grand C-Max range has been facelifted  for the 2015 model year – with the key change being the addition of Ford’s new Aston Martin-style family-look grille.

In combination with new headlights, a smoother bonnet and a more aggressive bumper – and with two new colours called Red Rush and brown-grey Caribou – it lifts the rather plain look of the current C-Max. It’s not just a facelift either; Ford’s fitted new rear lights and added a smoother tailgate that uses a new high-tech laser-brazing technique to create a classy look.

You won’t want to risk denting or damaging it, then: luckily, the C-Max introduces Ford’s hands-free ‘kick under the rear bumper to open’ tailgate opening system.

This tidying up exercise continues inside. Today’s dreadfully button-packed centre console is gone, replaced by a simpler to use system that’s built from better quality materials. Ford admits functions such as the air conditioning system “now feature buttons that are easier to recognise and distinguish from each other”. Thicker side glass, greater soundproofing and an improved dual mass flywheel for the engine will all make the new C-Max smoother in use.

Ford has even fitted stiffer noise-and vibration-optimised alloy wheels, to “reduce resonant vibrations”. Now that really is detail engineering – mind you, when it speaks of moving the windscreen washer jets from the bonnet to underneath the windscreen so as not to spoil the look of the restyled bonnet, you know this is much more than a token facelift.

There’s a selection of new safety tech on the C-Max and Grand C-Max, such as Active Park Assist which is enhanced by functions that warn the driver of oncoming traffic as they reverse out of a parking space, and also a steering assistance system that will steer them out of a parallel parking bay. Active City Stop has been improved and Adaptive Cruise Control is now offered on the range.

SYNC 2 is offered on the new C-Max; Ford’s voice-activated infotainment system, it boasts an eight-inch touchscreen and, says Ford’s chief engineer of electrical systems Christof Kellerwessel, “is simple and intuitive for drivers to use”. Given how the current system is anything but, we shall reserve judgement here.

Other tech highlights include the introduction of Ford’s parent-pleasing MyKey (although surely target C-Max buyers won’t have children old enough to drive yet..?), LED daytime running lights and Adaptive Front Lighting System that steers the lights into corners and highlights pedestrians at slow speed.

The new five-seat C-Max and seven-seat Grand C-Max, which go on sale early in 2015, also receive new engines that contribute to CO2 reductions of up to 20 per cent. There’s a brand new 120hp 1.5-litre TDCi, 1.0-litre Ecoboost petrols in 100hp and 125hp guise, and a heavily upgraded 2.0-litre TDCi that boasts the one-fifth CO2 emissions reduction.

Clearly, buyers have overcome any doubts that a 1.0-litre engine wouldn’t work in a seven-seat MPV: 25 per cent of buyers so far this year have chosen the 1.0-litre Ecoboost. Speaking of sales to date, Ford reveals the C-Max range accounts for 12 per cent of sales in this sector, and 1.2 million have been sold since the model was introduced back in 2003. Europe likes its C-Max.

Ford will showcase the facelifted C-Max range at the Paris Motor Show 2014 alongside the all-new S-Max range, plus the recently facelifted Focus and, at long last, the all-new Mondeo. It’s going to be quite a line-up – given such brand activity, the C-Max facelift could be forgiven if it were not quite as comprehensive as this. To Ford’s credit, though, it seems to have not cut corners. We’ll find out early in 2015 whether the work on the C-Max and Grand C-Max has been worth it.