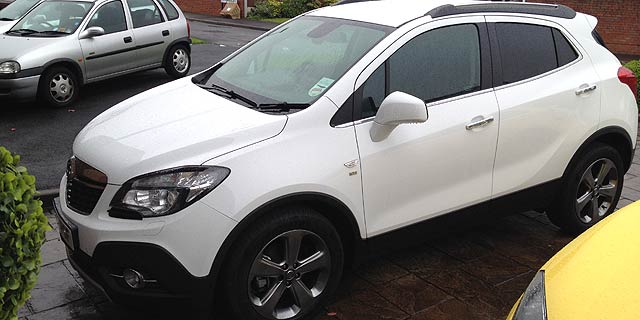 Ah, haven’t we driven the Mokka before? We have. But that was a diesel. And with a different remit. This one is a short-term loan of a petrol 4×4 to review for a client: hello, then, 1.4T Mokka – your rear resplendent with 4×4 badge ‘n all!

The Mokka’s had a hard beginning in the press. The initial launch cars weren’t finished, which didn’t help (nothing like handing over an imperfect car with a promise, huh…). Now it’s in the market, though, it’s proving to be a bit of a hit. So much so, Vauxhall can’t get enough – it reckons it would’ve sold 30 per cent more had the stock been available.

Blimey. So this white test car’s a bit of a rarity, then. And, from a first sit, perfectly grown up and fine. You sit high, have a great view out thanks to deep glass, and face an upmarket dash packed with gadgets (clearly a demonstrator, then). The seats are a bit hard and the steering wheel doesn’t come out far enough, but there’s nothing to really criticise too firmly here.

This is my first trial of the petrol engine, so I was pleased to find it started and idled quietly: the big issue with the diesel is its vocal clatter. Subdued and very, very smooth (Vauxhall’s long known how to make a great petrol engine), it’s sophisticated where the diesel isn’t.

Where’s the toque, though? We’ve been spoiled, become used to engines that do al the hard work for you. This doesn’t seem to – it’s one of those cars where, at low revs, you can bounce up and down on the accelerator pedal and nothing really changes.

I came back and checked the kerbweight. 1515kg. That’ll be it.

So, no point in giving it four-wheel drive, then? Well, you’d think that. But remember, we’re in post-BIG-STORM Britain right now, so the roads are covered in a leafy mulch. And it rained today. And it was cold. It’s all very slippery.

As torque will eventually appear, it means that the four-wheel drive’s traction is called upon more often than you may expect if you, as I was today, are experimenting. Feeling four-wheel drive stop the wheelspin is much more satisfying than sensing electronics doing it, believe me. Far more natural.

Also means you can be a bit Michelle Mouton in the Mokka, which certainly took a few by surprise today.

Sadly, it goes tomorrow, so I don’t have long to experiment. Best get on with it…