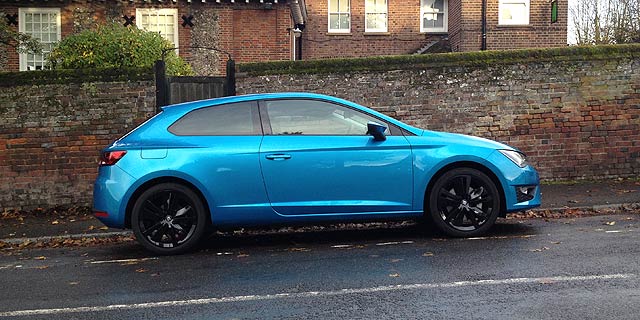 Surprise First 5 Minutes opportunity today, as a man delivered a Leon SC bright and early for us to conduct a twin test with our own SC long-termer for MSN Cars.

He was effusive about it, saying he wished the drive in had been longer and the traffic had been worse. Blimey. Don’t often hear that. Nothing else to do, then, but to drive it into the car park the long way round.

It looks good, that’s for sure. Images don’t quite show how lithe and crisp the sculpting on the Leon SC is: much more coupe-like than the five-door (and with the pointiest, edgiest freestanding door mirrors I’ve seen in a long while).

I eyed the full LED headlights with approval too – catching them glinting in shop windows and on the back of other cars fills you with feelgood. Will we miss Xenons? Not when LEDs are this snazzy. 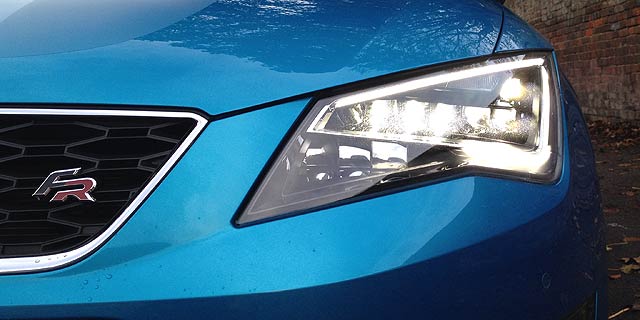 This Leon has a load of options thrown at it, including some ice-effect stripes for the bonnet and roof. At first, I thought it was morning dew – subtle but quite cool (although naturally, I’d go without). The black alloys are smart and, inside, I like how the ‘FR’ logo flashes in the navigation screen.

Being an MQB car, it is very well engineered. It exudes tight mechanical quality, meaning that as soon as you get rolling, it feels a classy product. The engine is part of this: the 1.8 TSI is no longer all that in terms of CO2 but it remains a very smooth yet very throbby and eager-sounding thing. Free revving, it still retains a bit of old school growl, despite all its sophistication. I liked it.

And the Leon itself? Could quite happily steer this round everyday, as indeed Peter is right now. For SEAT, it’s a real leap, with the sort of sophistication you really do associate with VW. You almost sense in Wolfsburg they may be thinking it’s too good: this or a three-door Golf? Tough call…