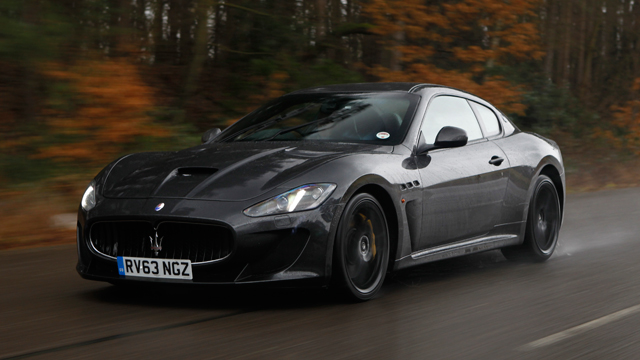 The most exciting thing about the first five minutes of driving a Maserati GranTurismo MC Stradale is not the looks, the performance or the noise.

It’s not even the eye-opening lurch from the MC Shift transaxle gearbox when you forget to lift off the accelerator during a paddle-actuated gearshift.

No. The excitement comes the first time you go to properly use the carbon-ceramic brakes.

The MC Stradale is top of the GranTurismo tree, taking its look and a certain amount of its performance and attitude directly from the GranTurismo MC Trofeo racing car. So we’re talking about 4.7-litre, 460hp V8, capable of 0-62mph in 4.5 seconds and a rather exotic-sounding 303km/h. Which is 188mph in British or American.

Finished in black and parked up in the rain at the Longcross test track, it looks like that leather outfit you know you shouldn’t find alluring but just can’t turn away from. And it sounds every bit as naughty, from start-up all the way to maximum attack – if not perhaps quite as screamingly loud from the inside as I’d been led to expect.

Despite the lashing weather, the combination of Pirelli P-Zeros, tight body control and convincingly meaty steering builds confidence quickly. The main Longcross circuit is characterised by a number of high-speed banked turns, and it’s a case of exit holding area, plant throttle and hang on – punctuated almost immediately by the aforementioned upshift, which hiccups though the car.

The MC Shift gearbox is a so-called robotised manual, rather than a conventional automatic, and while fast – down to 60ms in Race mode – it requires a slight throttle lift to make it smooth. You learn this trick quickly. It’s part of the fun, and the transaxle layout improves the GranTurismo’s weight distribution, increasing traction and altering the balance for the better. So it’s worth the effort. 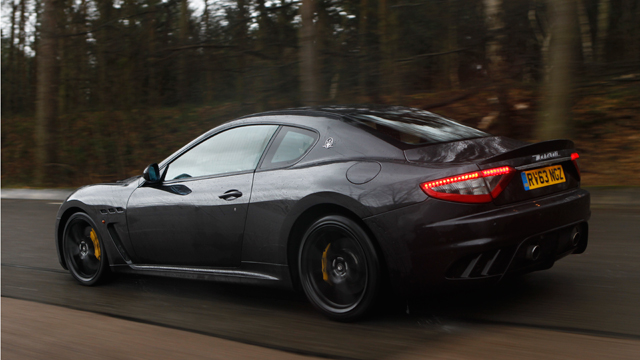 Carbon-ceramics are race-bred technology. The material is lighter, lasts longer and stops harder. Which is why the first time you go for them in anger in the MC Stradale is going to spring a surprise.

Approaching the only real right-hander on Longcross, and the second biggest braking point on the course, I go to just bleed a little speed off before turning in and get… nothing. It’s literally like standing on a plank of wood. Yikes! Push harder, there goes the speed – well, enough, anyway – into the bend and through. Interesting.

The same thing happens at the biggest braking point – although by now I’m expecting it so it doesn’t end in a macroscopic examination of the adjoining wall. Still. Interesting.

The car isn’t broken, the brakes are working fine – basically what’s happening is that I’m being a pussy. It seems Maserati’s Brembo ceramics don’t respect light-footed pansies like myself. Brake later, brake harder, and it feels like you’ve stopped the planet the car pulls up so fast. But gently modulating your speed on the road is going to be – yes – interesting.

My God, though, the MC Stradale has got charisma. The chops to challenge the latest 911 GT3? Absolutely not. But it’s one to ponder if you’re a high-rolling track day enthusiast who wants to stand out from the crowd.