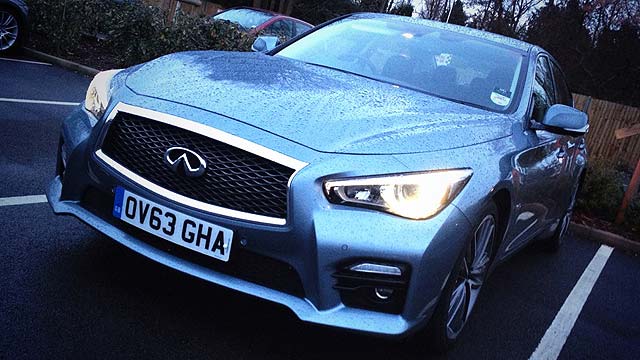 The Q50 is not the car Infiniti hoped it would be. A BMW beater, or at least an Audi challenger, it yearned: a worthy also-ran, seems to be the initial consensus.

So I wasn’t expecting brilliance tonight when I first drove it; I wasn’t filled with the sort of anticipation I felt when walking up to the brilliant BMW F30 3 Series in Barcelona airport a couple of years ago.

Expectations fulfilled when I sat inside, although in fairness, it did all seem perfectly nice and normal, and able to pass muster as a Japanese-flavoured premium alternative. It felt sportier and less plumped up and pillowy than the Lexus IS, and thus more familiar to European drivers (and more like a European to US drivers). The snort of a big V6 is always a nice thing to hear when starting up, too.

But that ‘steer by wire’ DAS steering, though. Before I’d reached the first roundabout, I was wary. It already felt like my first shaky attempts at steering a flight simulator joystick on my dad’s old Windows 95 PC: never actually finding the centre but passing through it while overshooting left, overshooting right, with magnetic electric linearity.

The guys in the office were praising the Lotus Exige S they’d driven today, while not comparing it to the Alfa Romeo 4C we didn’t have in for twin test*. Drive the Infiniti after the Lotus and you’d simply park it immediately, convinced there’s something dangerously wrong with it. Even my Golf Mk4 has more natural steering, and that really is saying something.

Half an hour of steering by magnetic repulsion and I’d felt the occasional glimpse of DAS appeal, but mainly wished it had never been invented. So I pretended it hadn’t and concentrated on other areas. Mainly, the hybrid bit.

Experience of the old M35h told me that Infiniti doesn’t half make a good hybrid. I said to the chaps in the office that I hoped it was a bit like that. It wasn’t. It was a whole lot better.

Growling like a sports car on startup is one thing. Seamlessly accelerating from high speeds to even higher speeds without hesitation, compelling you to maximise any gap in the traffic and shoot off with the thrill we were so wowed by in turbodiesels a decade ago, is another thing entirely.

The Q50 Hybrid is quick. 364hp, instant-EV-torque-response quick. And with an astounding system torque of 424lb ft, effortlessly muscular with it. 0-62mph takes 5.1 seconds; it feels even faster than that.

But it’s the sheer creamy fluidity of this wonderful hybrid drivetrain that really sets it apart. Cruising at 70mph, for example, if you lift off, the engine will shut down. completely without jolt, clonk or jar – it simply breathes out and is asleep. The sensation of engine off at overtaking lane speeds is weird at first, but satisfying from them on. Freewheeling at its best. Why aren’t all hybrids this feel-good?

Call for a bit of drive and it doesn’t instantly cut back in; at motorway speeds, you can drive forwards on electric power, if you’re careful. This is remarkable. Also deeply impressive is the hiccup-free way the engine blends back in again when you do need the extra torque. It’s a hybrid, complicatedly blending IC engine and EV motor, that’s smoother and more free-wheeling than an EV itself (and certainly less jolty than a turbo IC).

It’s deeply satisfying. It oozes class. It makes the Q50 feel a cut above, and is one of the most intelligent hybrid cars I’ve driven (and one that offers plenty of EV-only running whenever it can, at all speeds, without the added weight, cost or inconvenience of being a plug-in). 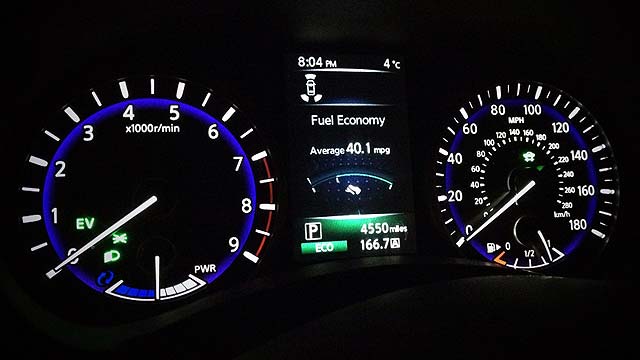 This is why the Q50 will appeal: this is its USP over the German-themed competition. This is why pairing it with such one-dimensional steering is such a pity. It’s a hybrid with running-on-carbs linearity and satisfaction: the steering is its complete antithesis.

Both are futuristic but only one makes you look forward.

*We were not twin-testing an Alfa Romeo 4C and a Lotus Exige S today. It was coincidence. Of sorts.