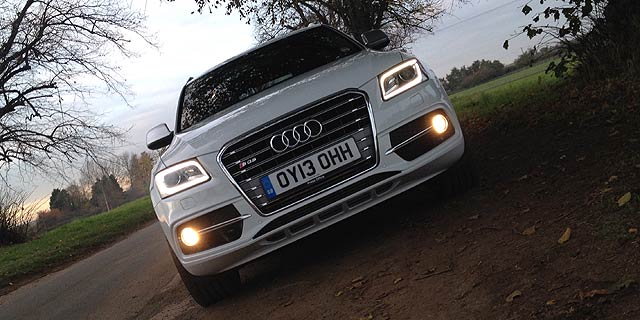 I hurried outside: Audi had saved me a choice of cars to drive at the range review day it’s running this week, but which one?

It would be the last run of the day so I focused in on one that’s intrigued me for a while but escaped me up to now. SQ5, please.

Well, it certainly looked potent enough, I thought, as we sauntered over to a glinting metallic white example. Big wheels, stylised bumpers and no less than four tail pipes exiting the rear.

Red and black leather was an eye-opening contrast inside, too. Not the spec buyers should necessarily choose choose (not even on the Q5-derived Porsche Macan), but it certainly brightened things up in the dusky November eve. My goodness, were the bolstered seats softly, supportively comfortable as well.

All that disappeared from my mind when I pressed the starter button, though. Hello, what’s this? A rumble?

A rumble indeed. A sort of hybrid V6-V8 rumble. With a couple of big-bore Sierra RS Cosworth exhausts on the back. Unexpected? Totally. Which is why the next four minutes 30 seconds were spent accelerating and slowing down on the road that leads out of Walton Hall. Savouring it. Thinking, how cool is this?

As I indicated right, I knew this was far from the quick stock SUV I’d expected. This was… a bit more than that, alright.