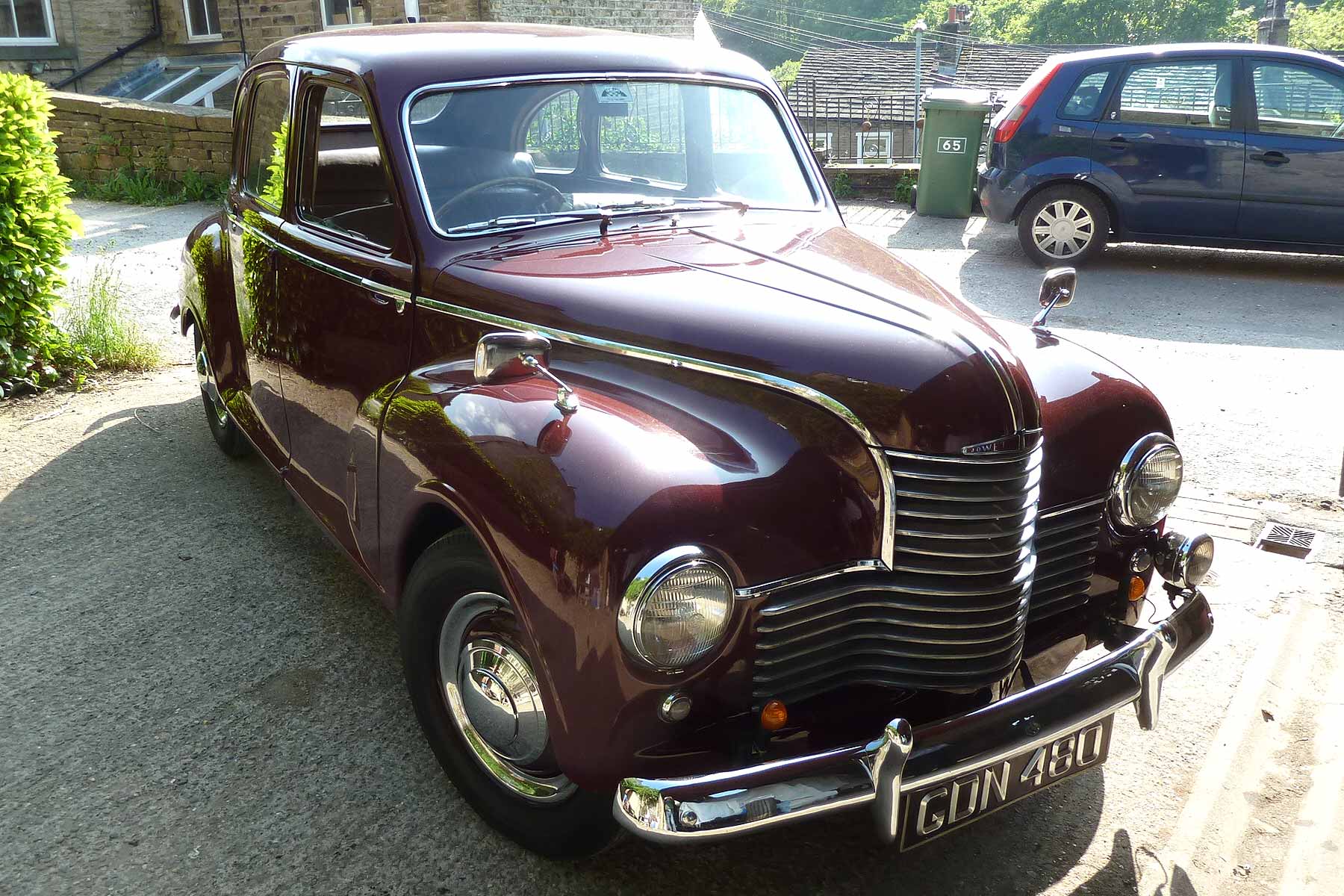 Think of revolutionary, post-WW2 cars from Britain, and one small thought immediately comes to mind – the 1959 Mini. But 12 years before the country’s most famous car was launched came another quietly brilliant, rule-bending machine.

Like the Mini, that car would win silverware in the Monte Carlo rally, it would demonstrate that fast, family car cornering needn’t be a torrid affair and – wait for it – it was the first British car to have a curved windscreen. And again like the Mini, its design was largely the work of one man.

That car was the 1947 Javelin. Compared to most of the warmed-over, upright, separately mudguarded pre-war throwbacks that most British car-makers were building in the late 1940s, the Javelin was a peek into a brighter future. Its origin was as much a surprise as its streamlined silhouette, the Javelin made by the Yorkshire-based Jowett company. 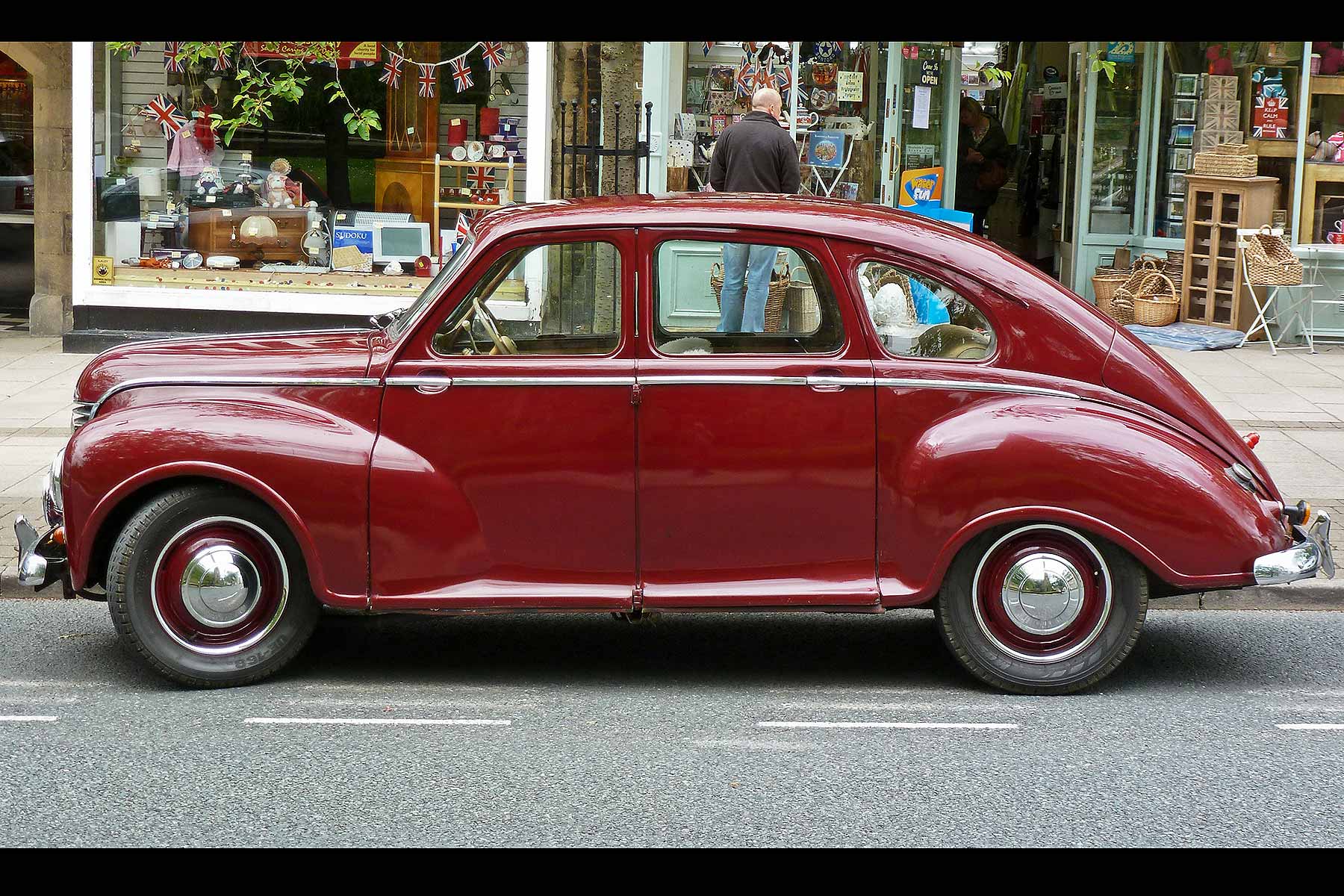 This was relatively small outfit compared to the dominant Austin, Morris, Ford, Hillman and Vauxhall of the day, its pre-Javelin range mostly centred around a tough 1.0 litre twin cylinder that the founding Jowett brothers had developed in 1910. This engine was usually found propelling vans and utilitarian family cars that would have complemented homes with no bath and an outside toilet.

The vehicle Jowett was most dependent on for its business was the Bradford van, a 1946 rework of a 1932 design that nevertheless found 38,000 buyers, many of them overseas. And presumably, given its 55mph top speed, most of them had time on their hands. The Javelin, however, would be capable of a far headier 80mph, an eye-widening pace for a late ‘40s family car. And it had the looks to go with it.

But what made the Javelin especially special was a lot more than its clean, fastback shape. Its creators were well ahead of their time for conceiving it as a world car, suitable not only for the UK but Europe, North America and Africa. Designer Gerald Palmer was better qualified than many for the task, having grown up in southern Africa. His dirt road experience determined several Javelin fundamentals, among them eight inches of ground clearance and the unusually strong chassis structure partly responsible for its fine handling.

Like Mini designer Alec Issigonis Palmer was a lot more than a stylist, his considerable engineering skills enabling him to design the entire car, engine included. Apart from aiming for the robust, he also wanted an aerodynamic car with plenty of passenger space. The Jowett’s aerodynamic properties were part guesswork, the car never seeing the inside of a wind tunnel, but there was a widely held view at the time that ultimately, cars would resemble the teardrop shape of a fish. 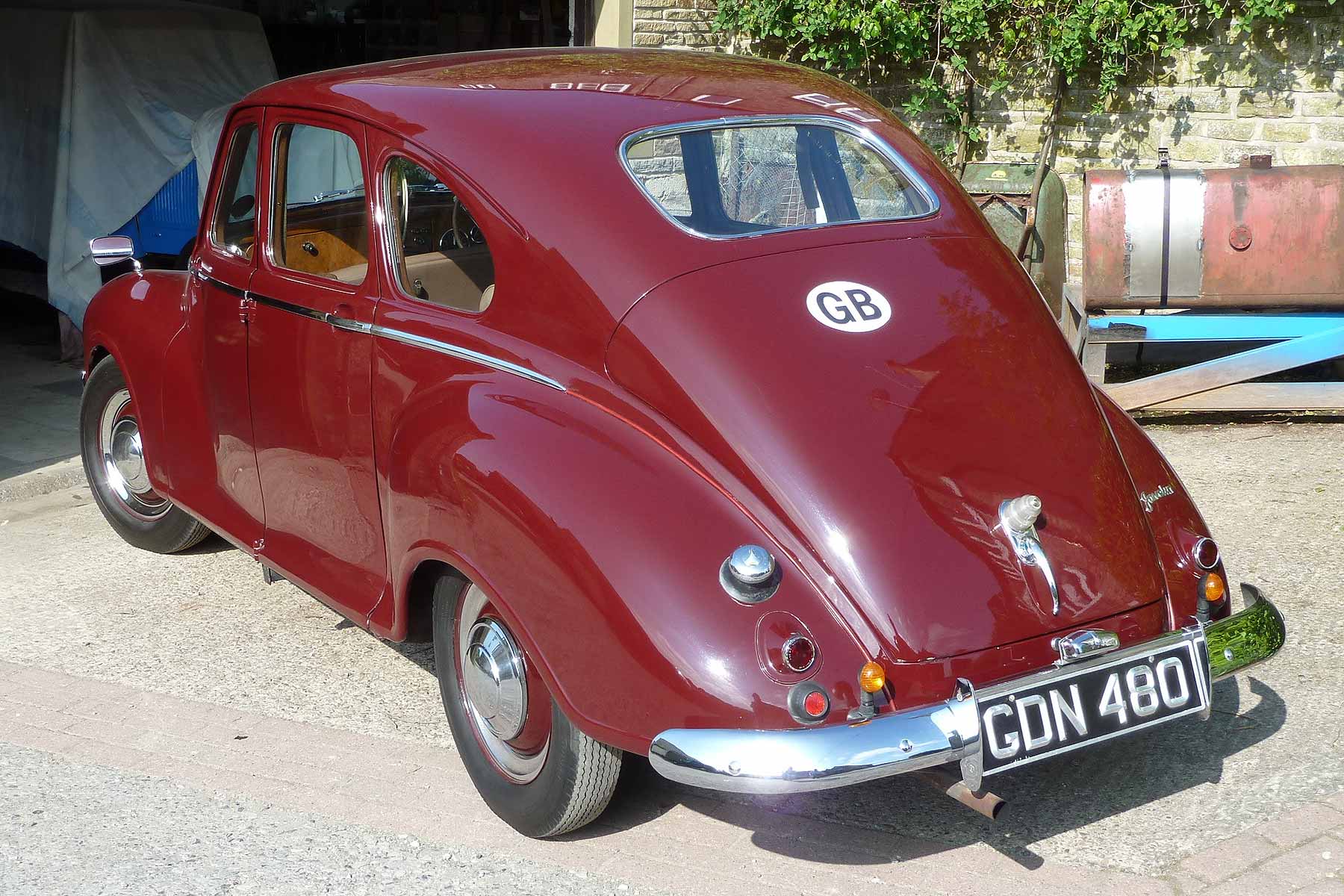 In many ways that was right, Palmer’s attempts leading to the sloping tail, the fared in rear wheels and the absence of running boards. The curved windscreen would have helped too, glassmakers Triplex offering Jowett the chance to be first in the UK with this feature.

The roomy cabin – a bench front seat allowed room for six – was achieved by mounting the Javelin’s 1.5 litre engine well forward. The engine was a bit more compact than a conventional in-line four cylinder because of its Subaru-style boxer layout, yielding a shorter block.

Flat-fours were not new to Jowett, the company selling some before WW2, the layout a logical development of the company’s flat twin. But this engine was all-new, and the work of Palmer.

He also designed the car’s space-efficient, all-independent torsion bar-sprung suspension, most other rear-wheel drive cars having a live axle suspended by cart springs. The result was a ride that kept a Javelin man’s tobacco in his pipe, and roadholding grippy enough to get aunty Gertie begging for mercy. 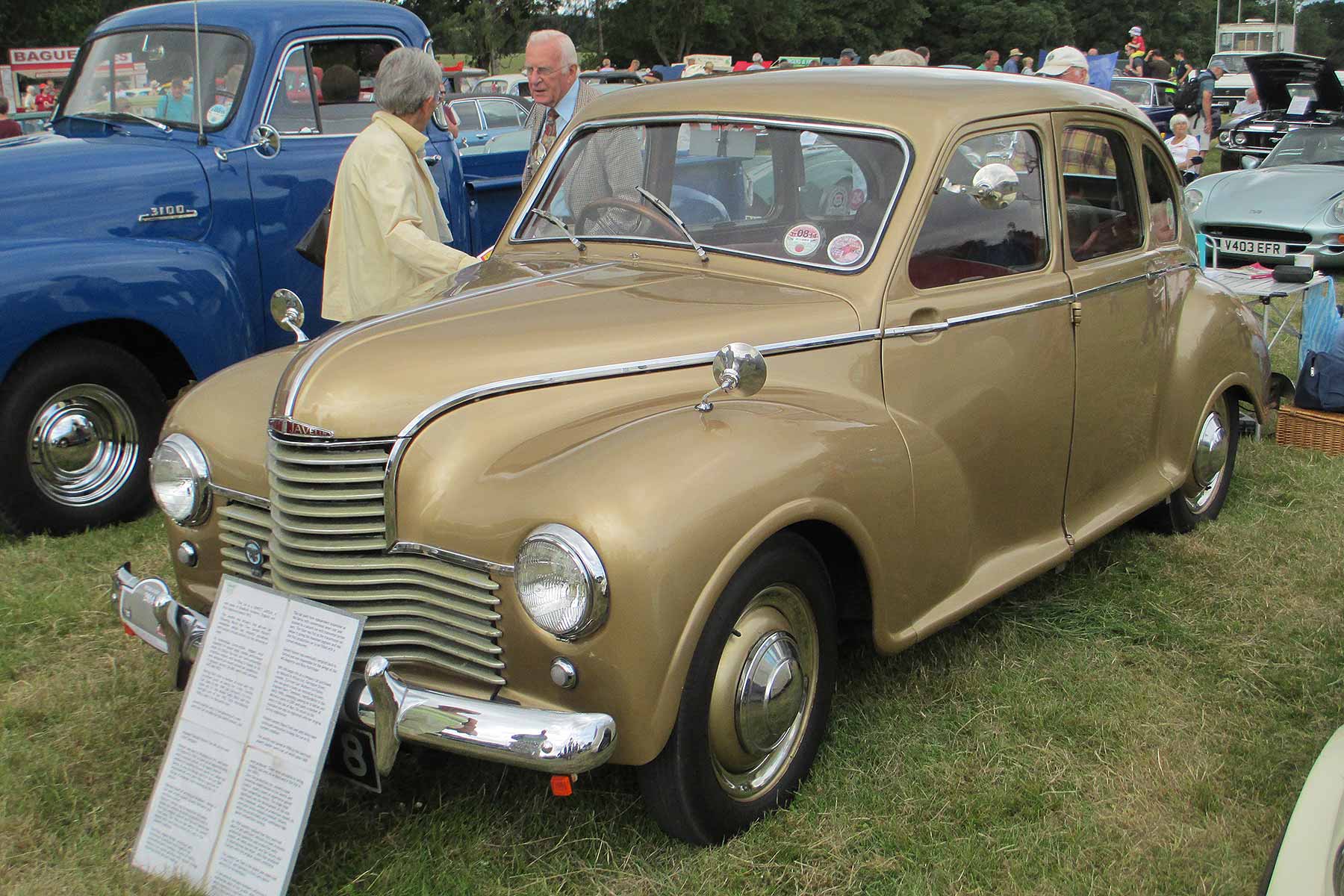 All of this contributed to the car’s slightly unexpected class win in the 1949 Monte Carlo rally, in which Palmer was a co-driver. This success was followed by a still more impressive class win in the Spa 24 hour race, the car soon gaining a name as a car for the sporting chap.

It also gained plenty of press accolades, ‘The Motor’ concluding that the Javelin had ‘a combination of qualities rendering the car unrivalled in its field.’ Jowett’s gamble on a new car, a new engine and advanced new factory equipment to build it with looked like it was paying off. And having finished this design, Palmer was head-hunted by the Nuffield Organisation to design new models for Morris, Wolseley, Riley and MG.

But he left behind a company whose success would turn to failure. In an effort to save money, Jowett designed its own transmission to replace the bought-in unit, but the ‘box was not up to the job. Of the first 1000 cars fitted with it, 78 suffered failures, early cars also prone to overheating and worse, fracturing crankshafts.

Jowett ultimately upgraded the engine into quite a tough performer, but by then the Javelin’s poor reputation, and a shrinking UK market, saw sales the sales graph plunge.

The Javelin’s body supplier had also been bought by Ford, which continued to honour the contract to the point that Jowett ended up having to store bodies around Bradford, football ground included, because sales were so slow. Body supply was temporarily halted in 1952 and was never restarted, because Jowett ceased trading in 1954. 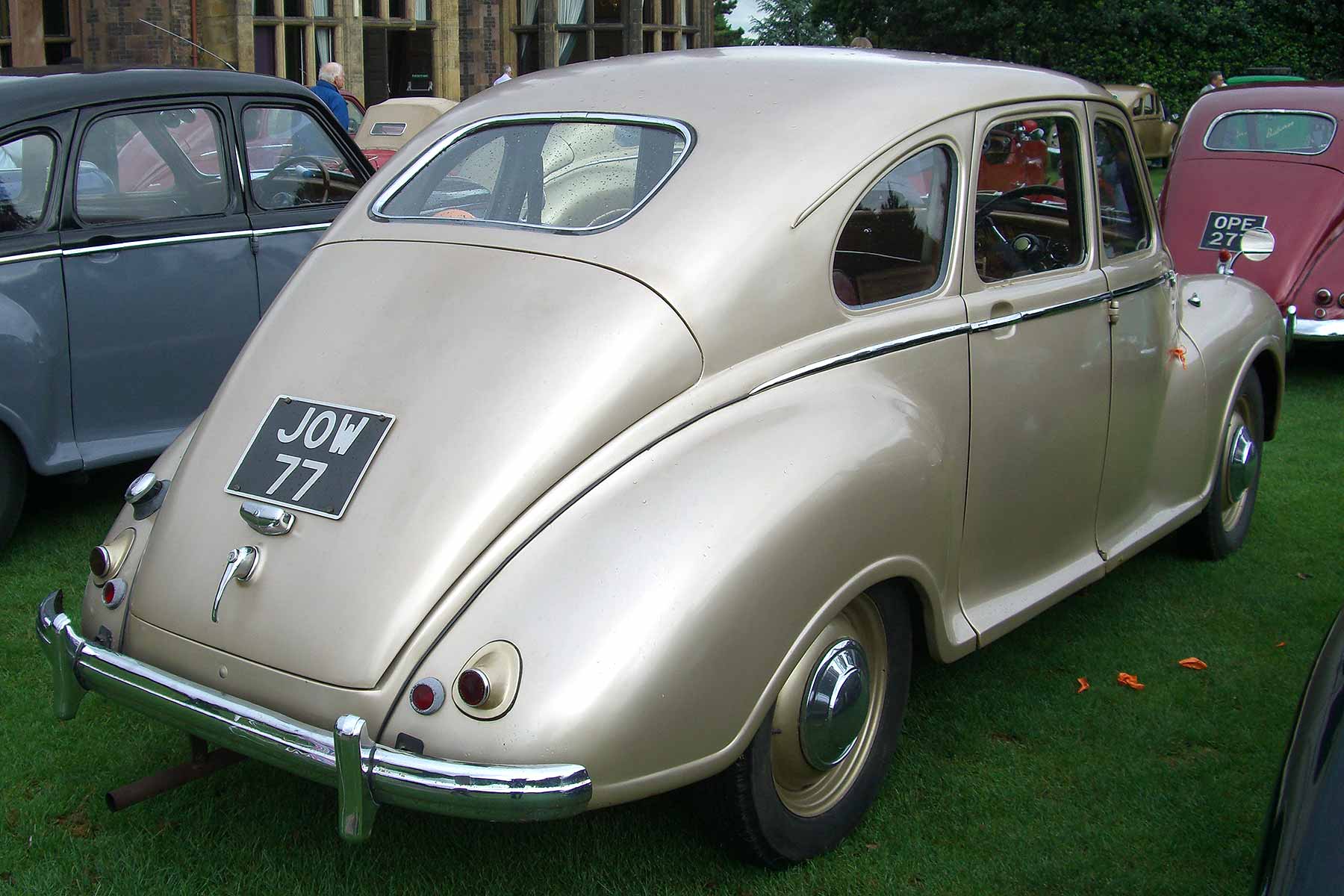 The company had over-reached itself, introducing too many new components and systems and failing to test them adequately, a common failing of the British car industry. Had the Javelin been more reliable it could have propelled Jowett to new heights. As it was, only 22,700 were built – less than the geriatric Bradford van.

The British car industry has many stories of brave failure, just as the American, German, French, Italian and Japanese industries do.

But what made the Javelin different, apart from its striking looks, was the quality of thinking that went into its design. It’s a real shame that the same effort wasn’t invested in its testing.