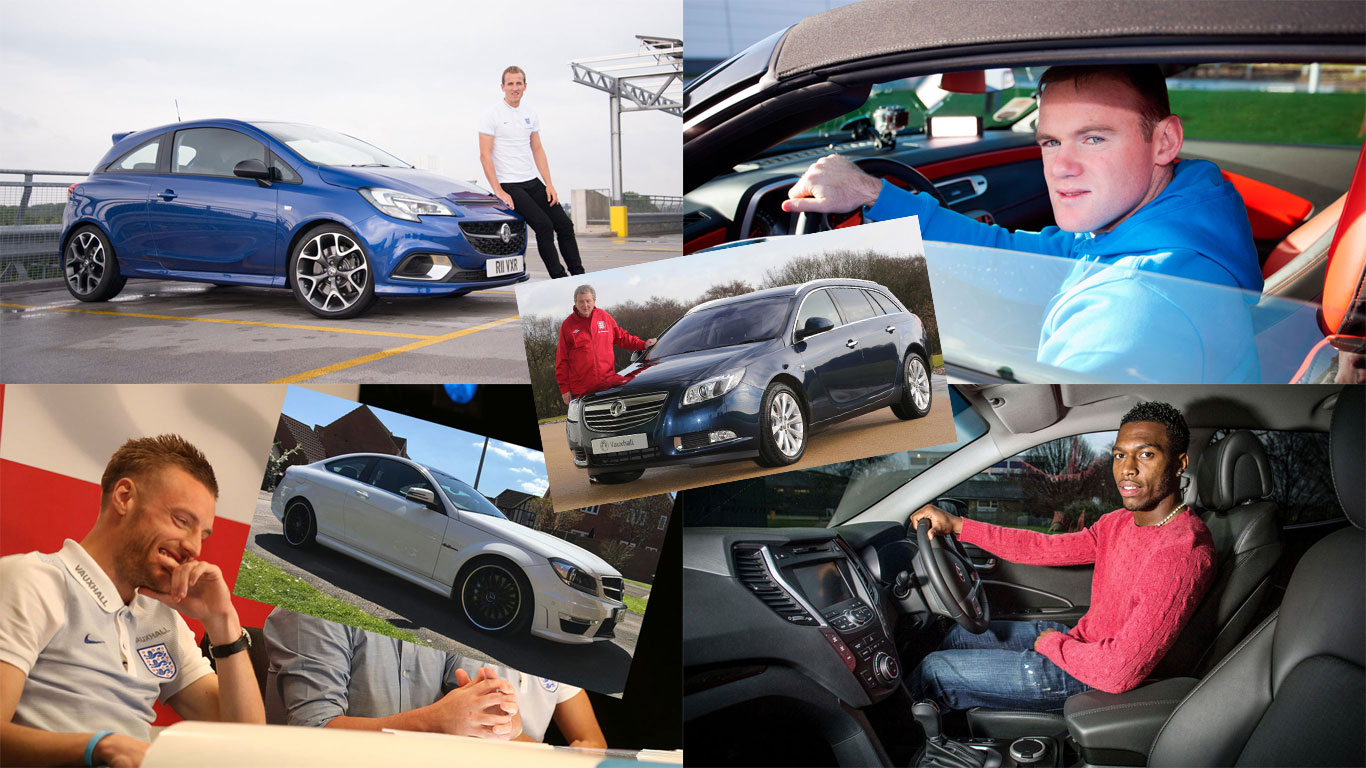 It’s the eve of Euro 2016 and there’s only one question on the lips of England fans from Allonby to Zennor. No, not whether or not ‘brave England’ will make it out of Group B, or how Roy will work the formation around Captain Rooney, but what cars are owned by the England players?

Our office is split down the middle, with half of us relishing the prospect of wall-to-wall football and the other half praying for the tournament to end. If you’re in the latter camp, may we suggest switching to the History channel for a few weeks.

For those of you still with us, let us guide you through the whips* of the players who are about to feel the weight of an entire nation’s hopes and dreams on their shoulders. *We understand whip is a street term for car. No, we didn’t know that either.

As England’s number one and safest pair of hands, we had visions of Joe Hart driving a Volvo XC90. Alas, no such luck. Instead, Hart uses a Bentley Continental GT to transport him between training sessions and promotional work for a certain shampoo company.

In 2014, his club Manchester City wrapped his car in Christmas wrapping paper. He took it in good spirit. Hart’s the guy on the left, standing head and shoulders above the guy in the Sky Blue Santa outfit. Ho, ho, ho.

OMG! Kyle Walker was man of the match in the game against Portugal. Here he is with a Range Rover. OMG!

By footballing standards, an Audi S3 saloon is a pretty restrained purchase. There’s a new model on the way, but Danny Rose’s car would have cost around £33,000 plus whatever options he went for. The balloons were free. Probably.

Liverpool midfielder James Milner has developed a somewhat unfair reputation for being, well… rather boring. The ‘Boring James Milner’ Twitter account has well over 500,000 followers. But Milner has had the last laugh, being named the fifth best player at Euro 2016 by UEFA’s ranking tool.

As for his choice of wheels, something like a Mitsubishi Mirage or Kia Venga would suit the boring tag. But we suspect he follows the crowd and drives a Range Rover. That said, we understand he did own an Aston Martin DB9. Not so boring now, is he?

Gary Cahill has owned a number of Range Rovers and has often been papped around Stamford Bridge or the club’s Cobham Training Centre.

Chris Smalling, who scored a fine header against Portugal in an otherwise drab match, has been seen driving around Manchester in a Bentley Continental GT.

But if this tweet is anything to go by, he also owns a Chevrolet Corvette. Given Chevrolet’s sponsorship of Manchester United, this wouldn’t be out of the question.

In February 2016, it was reported that Raheem Sterling was looking for a seventh car so he would be able to drive a different car every day.

You may have noticed a running theme here. The face of a certain moisturising cream owns a Range Rover. Wouldn’t it be nice if one England footballer drove a Dacia Duster? Or a Suzuki Jimny?

How much money would you place on Harry Kane walking away with the Golden Boot at Euro 2016? Perhaps more predictably, Kane drives a Range Rover Sport.

In 2015, Kane took part in a promotional feature in which he drove a Vauxhall Corsa VXR. Given he was born in the former Essex parish of Chingford, we had him down as a Fiesta ST man…

For once, the hopes of a nation don’t rest entirely on Rooney’s shoulders or his metatarsal, but England expects him to perform. His motoring back catalogue isn’t quite as impressive as say David Beckham’s or Cristiano Ronaldo’s, but it’s not far off.

It all started with a Ford Sportka when he was at Everton, but he has since moved on to some of the world’s most exotic cars. Today, the supercar of the future, aka the BMW i8, is part of his collection.

How do you celebrate signing a new £13m contract at Leicester City? By ordering a new Bentley Continental GT, of course. Meanwhile, his old Mercedes-Benz C63 AMG was up for sale on Auto Trader.

After winning the Premier League title, the club’s owner promised to buy every player a new electric Mercedes-Benz B-Class. We suspect Vardy might be asked to return the Merc if he signs for Arsenal.

We’re guessing the Mercedes-Benz parked alongside is owned by somebody in Liverpool FC’s accounts department.

We have no idea what the Southampton and former Celtic ace drives to work. If you know, please write to us at: I Know What Car Fraser Forster Drives, PO Box 2, England, Still in Europe.

Jordan Henderson has been spotted driving many cars, including… yes, you’ve guessed it… a Range Rover, along with an Audi RS7.

The Liverpool striker has a pretty handy two-car garage: a Ferrari 458 Italia and a Rolls-Royce Wraith.

Previously, Sturridge has been spotted behind the wheel of a Porsche Panamera and Hyundai Santa Fe, the latter of which was given to him as part of his contract at Liverpool.

Will John Stones still be an Everton player by the end of Euro 2016? We he start an England game during the tournament? Does he still own this Range Rover?

For his winning goal in the 3-2 win against Germany, Eric Dier is already an England legend. As for his choice of wheels, we’re not sure.

When you’re injured as much as Jack Wilshere, it pays to have something to occupy your mind. A new app for your smartphone, a good book, a Lamborghini Huracan. Smoking.

Another footballer, another Range Rover. Ross Barkley’s ‘whip’ is described as ‘boss’ by this tweeter. Far out, dude. Or something.

Dele Alli is a player with the world at his feet, but sadly we’re unable to confirm his choice of wheels. That said, you can find footage of the Tottenham ace learning to drive in Milton Keynes. He looks enthralled.

What no Range Rover?

Southampton full back Ryan Bertrand goes his own way, treating himself to a Ferrari 458. Making sure his daughter isn’t left out, he also bought a miniature Ferrari to go with it. Good stuff.

A year ago you probably hadn’t heard of Marcus Rashford. But like Jon Bon Jovi, he emerged in a blaze of glory and now the young gun could be spearheading England’s attack at Euro 2016.

And while most 18-year-olds will be content with a Fiesta or a Corsa, the Manchester United forward drives an Audi RS4.

Burnley’s shot-stopper earned himself a call up following the injury to Stoke’s Jack Butland. As for his choice of car, we don’t know.

Here we see Tom Heaton on the right, as a pair of MG3s are handed over to fellow Burnley players Sam Vokes and Kieran Trippier.

All of which leaves the boss, Roy Hodgson. Thanks to Vauxhall’s sponsorship of the England team, the gaffer drives a Vauxhall Insignia Sports Tourer Elite with a 2.0-litre diesel engine.

In a comment that wouldn’t look out of place on Boring James Milner’s Twitter timeline, Hodgson said: “I am delighted to be driving a Vauxhall Insignia Sports Tourer.” And we’d be delighted if you guided the Three Lions to victory, Roy. No pressure.