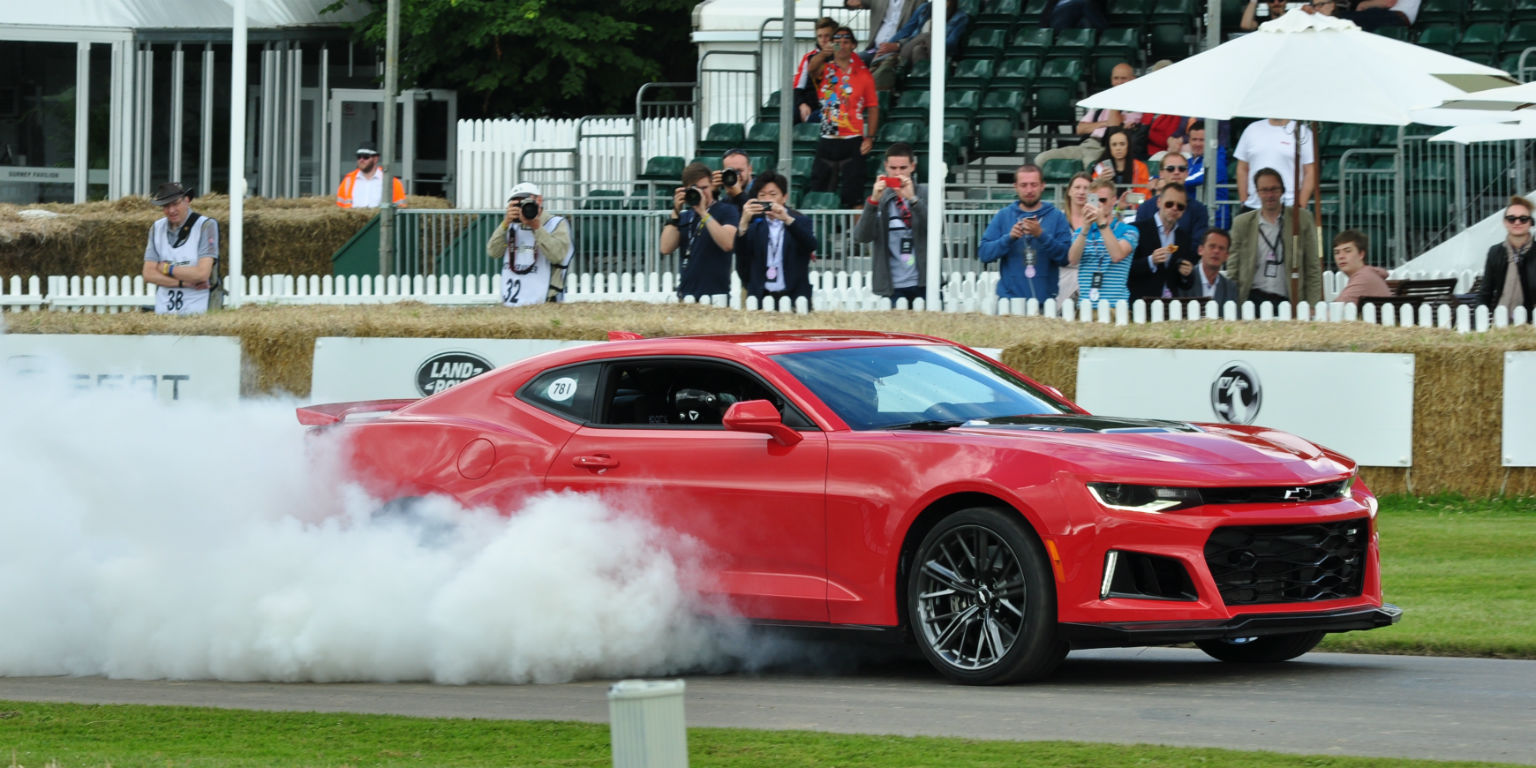 This was THE weekend for soggy festivals – from the music lover’s Glastonbury to the petrolhead’s Goodwood Festival of Speed. We’re concentrating on the latter, with this year’s theme of ‘Full throttle – the endless pursuit of power’.

Naturally, a highlight of the weekend was exotic supercars speeding up the legendary Goodwood hill. The Ferrari 599XX Evo, pictured here, can hit 62mph in ‘less than 2.9 seconds’ and a top speed of 196mph. We doubt it got close to that at Goodwood…

Just as extreme is the Ferrari FXX K (yes, it really is called that). The hybrid race car produces an incredible 1,035hp and is good for 220mph.

The £1.9 million Bugatti Chiron hypercar made its UK dynamic debut at this weekend’s Festival of Speed. With a power output of 1,500hp, the Veyron successor has a top speed of 261mph.

This is the LMP1 car that Porsche has just used to win Le Mans for the second year in a row. The Porsche 919 Hybrid weighs just 875kg and is powered by a 2.0-litre four-cylinder petrol engine, combined with a large electric motor.

The historic Lancia 037 Group B rally car was the last rear-wheel-drive car to win the WRC. No doubt a bit of a handful at a wet Goodwood, the Lancia 037 is now more than 30 years old.

Stepping away from the hill climb now and looking at what else Goodwood had to offer. On Vauxhall’s stand was this Maloo, carrying one of the oldest Vauxhalls in existence.

Over on Goodwood’s Cartier Lawn was the ‘Style et Lux’ concours, featuring a myriad of exotic and rare cars. This TVR Trident is one of just four ever made.

Celebrating the 50th anniversary of the original 2002 turbo, the Hommage is based on the five-star BMW M2. Its compact dimensions and ‘shark nose’ grille give it an aggressive look. Unfortunately, it’s a one-off.

With BMW celebrating its centenary year at Goodwood, there were lots of amazing BMWs old and new on display. This M1 caught our eye – with its mid-mounted engine and sleek Italian styling, it’s a very desirable classic car.

Set to take on the Porsche 911 GT3 RS, the ultra-hot (and ultra green, literally) Mercedes-AMG GT R made its debut at Goodwood. Here it is, taking centre stage on the firm’s huge show stand.

Unsurprisingly, McLaren’s section of the supercar paddock was drawing the crowds over the weekend. The 675 LT Spider, pictured here, costs an incredible £285,450.

Think the regular 205 GTI is pretty special? It’s got nothing on the Group B 205 T16. Packing an incredible 500hp, this ‘hyper hatch’ was no doubt a bit of a handful on the wet hill climb.

Land Rover took along its mobile off-road course to Goodwood, with even appalling conditions failing to give the Evoque’s terrain response a workout.

No, this isn’t a scene from the Festival of Speed car park (although it could have been). Porsche showed off the abilities of its Cayenne 4×4 on wet mud, using cars borrowed from its Experience Centre at Silverstone.

Honda showed off the new NSX at Goodwood, but we prefer this original version – developed with help from none other than Ayrton Senna. It blew away the rival Ferrari 348 when launched in 1990.

There aren’t many things that sound better than a Lamborghini Huracan at maximum attack. And opting for the roofless version means you can enjoy that 610hp V10 in all its glory. Ciao bella!

The RE40 was the first Renault F1 car to have a full carbon fibre chassis. It also had a 1.5-litre V6 engine producing a mildly terrifying 880hp. No wonder it took the great Alain Prost to tame it.

What’s even better than a McLaren P1? Yes, the racing-spec P1 GTR, with power boosted to 1,000hp, weight reduced by 50kg and a weapons-grade aero package. The paintwork on this car was inspired by much-loved racing driver, James Hunt.

The beautiful Aston Martin DB11 treated the crowds to its cultured V12 howl. After making its debut at the Geneva Motor Show earlier this year, this was the first chance to see Aston’s new supercar in action.

The hottest Golf GTI arrived from from its record-breaking lap of the Nurburgring. It’s the fastest front-wheel-drive car ever around the notorious German racetrack, with a time of 7min 49.21sec.

This Porsche 911 is half Lego and half the real thing. We have three questions. How long did it take to build? Does it drive? And can we have one for Christmas?

Posing next to a P-51 Mustang fighter, the Shelby GT350 is one of the fastest and most sought-after versions of the original Ford Mustang. Spot the GT40 in the background, too.

Goodwood has become the de facto British Motor Show in recent years. The Alfa Romeo Giulia saloon made its UK debut here – allowing punters to compare it to the rival Audi A4 and BMW 3 Series.