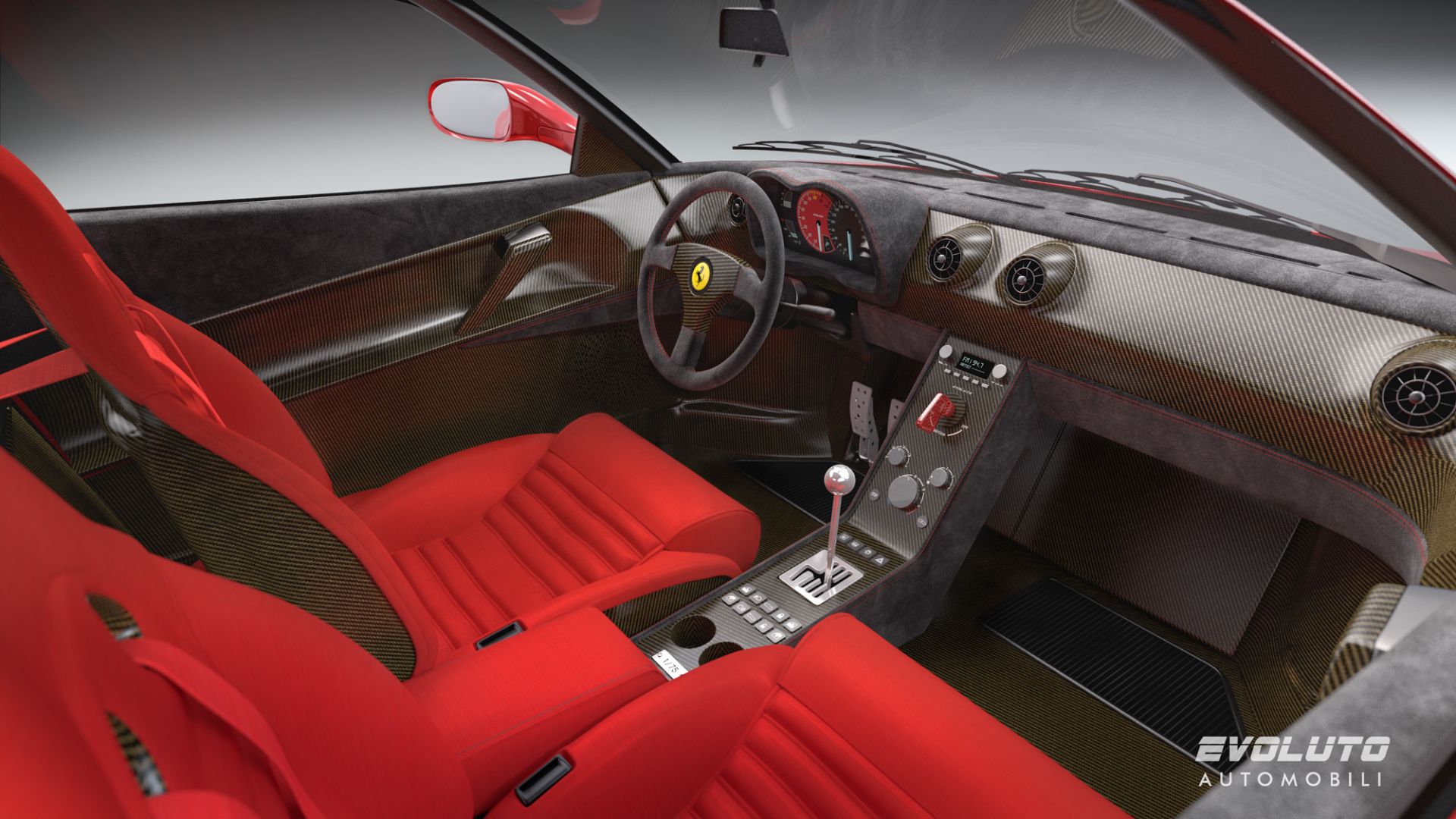 Not long ago, we broke the story of the Evoluto Ferrari 348. Essentially, it’s the ultimate mid-engined Ferrari Berlinetta, born from a 348 after a Singer-style makeover.

Now, concepts for the car’s cabin design have been revealed. 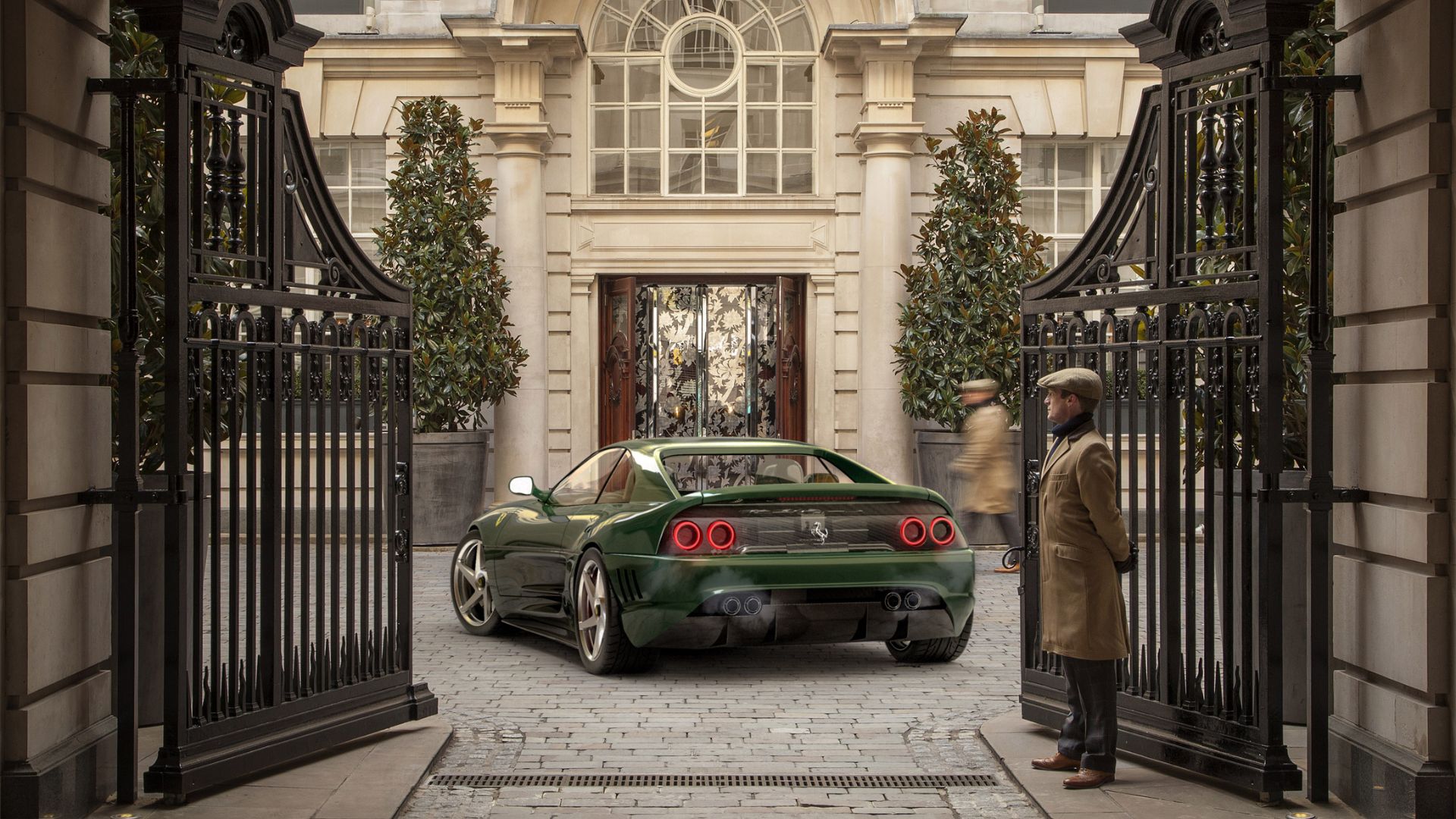 By ‘Singer-style’ we mean the Evoluto 348 cherry-picks and exaggerates the very best bits of Ferrari V8s over the years. That’s why it looks like a modernised 355, arguably the prettiest modern Ferrari.

That’s also why it’ll rock a 500hp 360 Modena engine – arguably the best compromise for sound, reliability and indeed power. Oh, and an H-pattern gated manual ‘box. That’s just a given.

Inside the Evoluto Ferrari 348 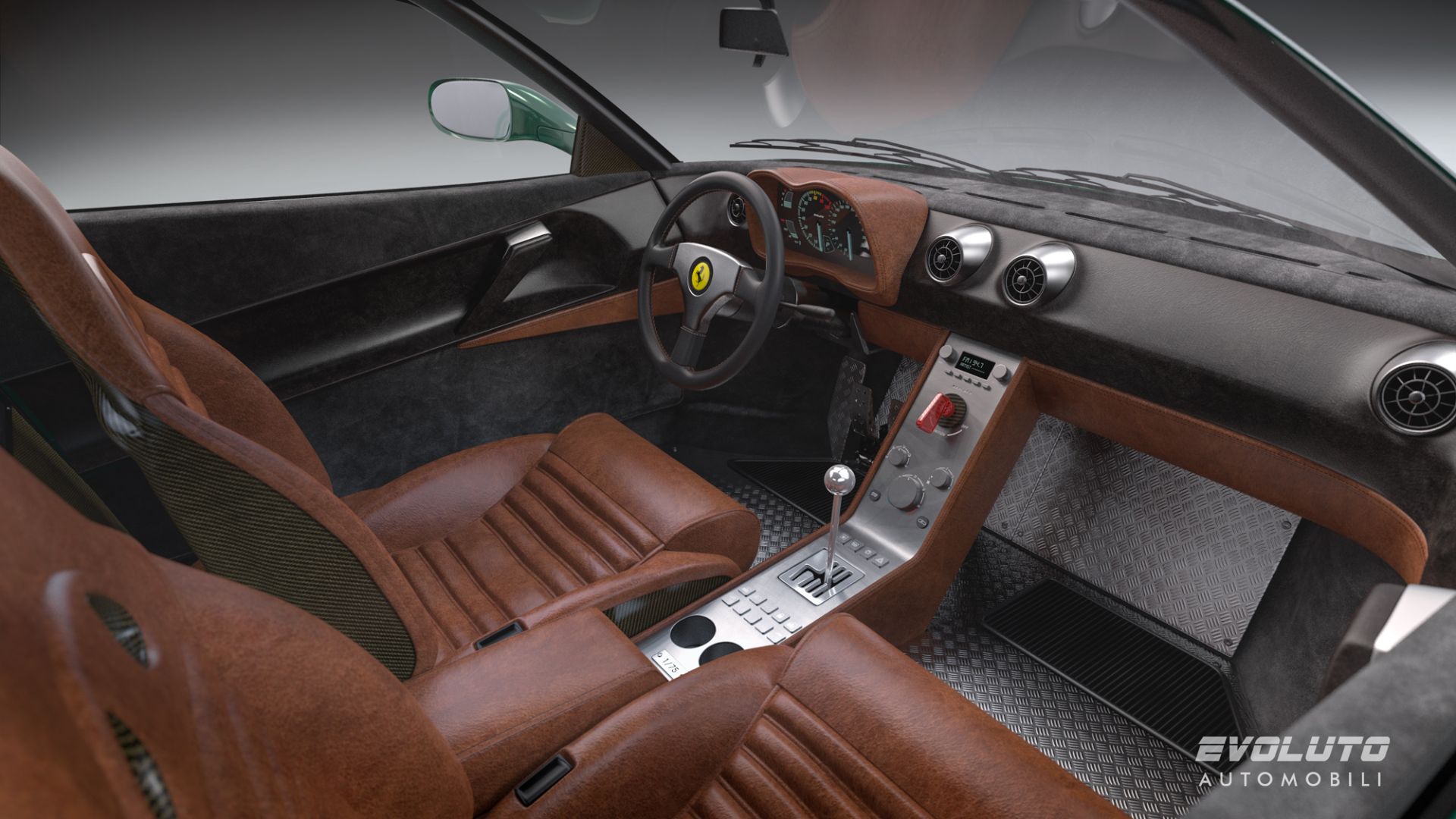 Now, the cabin designs are out of the bag and as you can imagine, it’s not a 348 with a new coat of leather.

The dashboard is available in either full carbon or leather, while it sports a ski-slope centre console somewhere between an Enzo and a Ferrari Challenge racer. The air conditioning and radio controls are subtle and stylish and don’t take away from the motorsport feel. 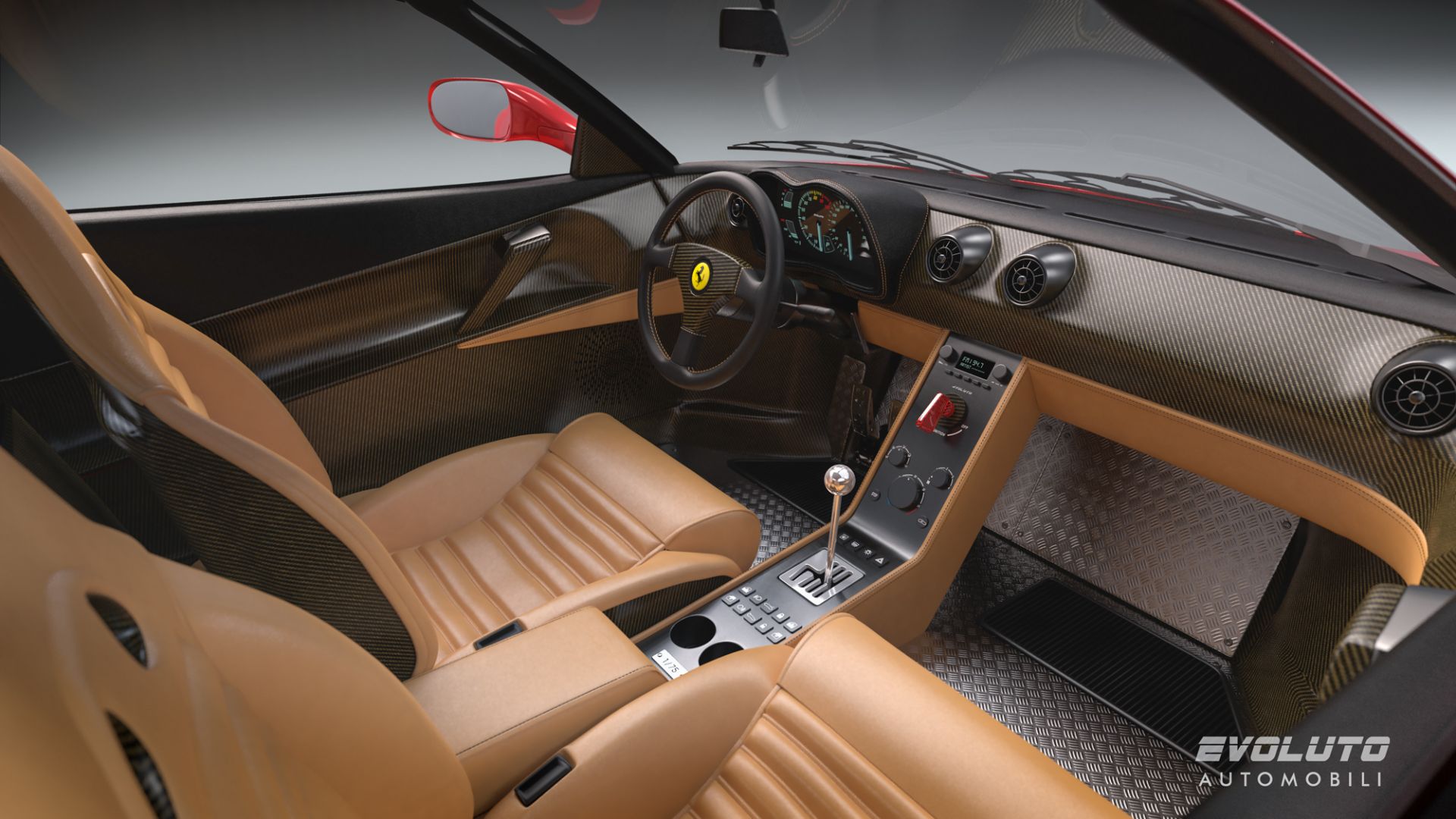 The ventilation appears to be inspired by newer Ferraris. The steering wheel, of course, is of a classic no-airbag design, while the seats are carbon-backed buckets inspired by the units found in the 348 Serie Speciale. Whether they’re comfortable remains to be seen.

The instrument binnacle, interestingly, appears to be borrowed from newer Ferraris. Is there a bit of F430 in there? There appear to be digital readouts from that generation of Ferrari.

‘Taking inspiration from the F40 and F50’ 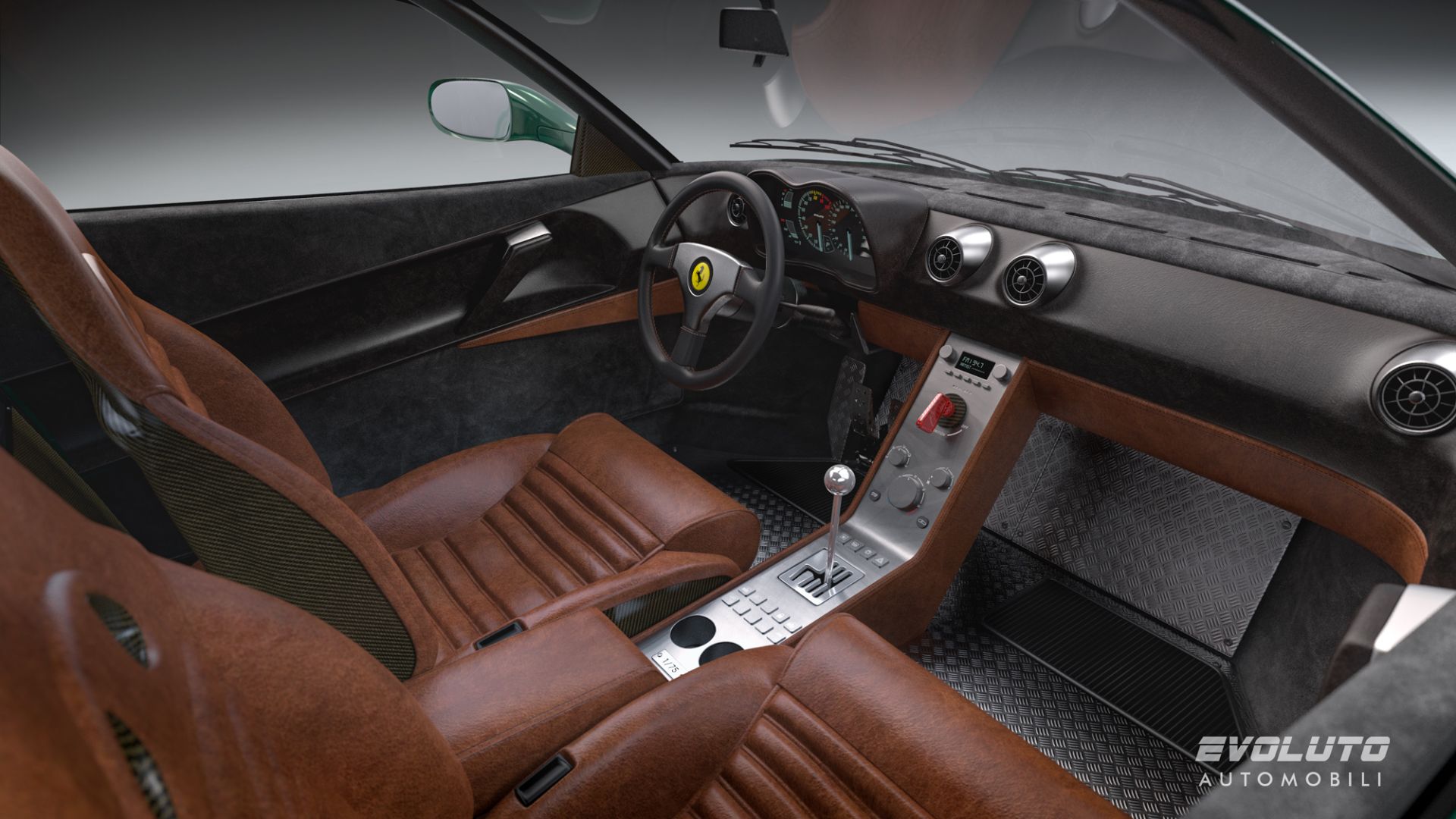 The red render is more hardcore and it’s not a huge leap to say it’s heavily F40- and F50-inspired. Just look at those four-point harnesses.

More than 100 components will be upgraded to bring the 348’s cabin up to this spec. Customisation will, naturally, be almost infinite.

A full options list for the Evoluto 348 be published next week. We’ll have another update for you soon.