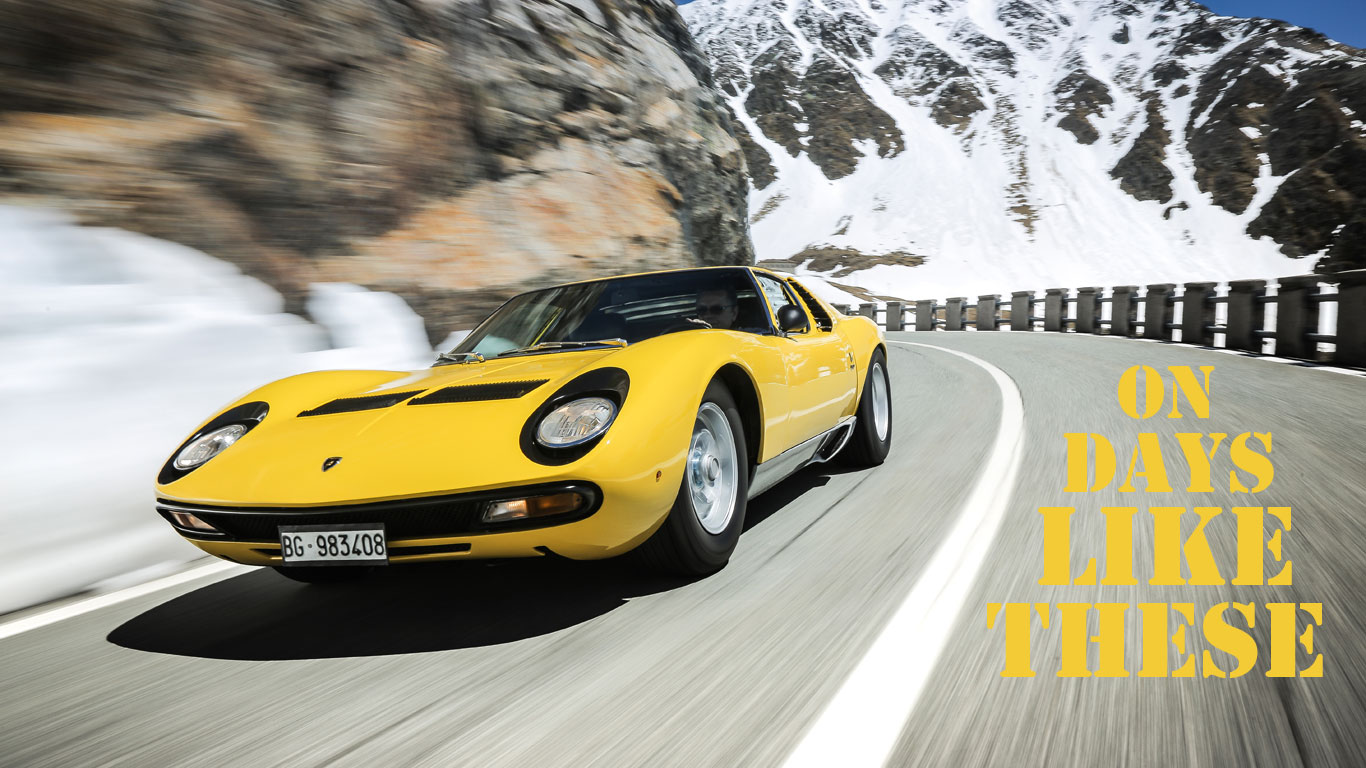 There are many film stars celebrating the ‘big five-o’ in 2016, including Helena Bonham Carter, Kiefer Sutherland, Adam Sandler, Patrick Dempsey and Halle Berry. But we doubt many Hollywood legends spent their 50th birthday in the Alps. However, that’s exactly how the iconic Lamborghini Miura supercar celebrated its 50th anniversary…

Anyone familiar with The Italian Job movie will understand why Lamborghini chose the Alps as party central. The red, white and blue Minis might be more synonymous with the 1969 comedy caper, but an orange Miura was the star of the opening sequence. Sadly, in the film at least, the Lamborghini Miura made a rather sudden exit from the movie.

To the backdrop of Matt Monroe’s On Days Like These, the Lamborghini Miura snaked its way along the Great St. Bernard Pass, creating one of the most iconic title sequences of all-time. After a run-in with a bulldozer, the wrecked Miura was unceremoniously pushed off a mountain, falling into the river below. 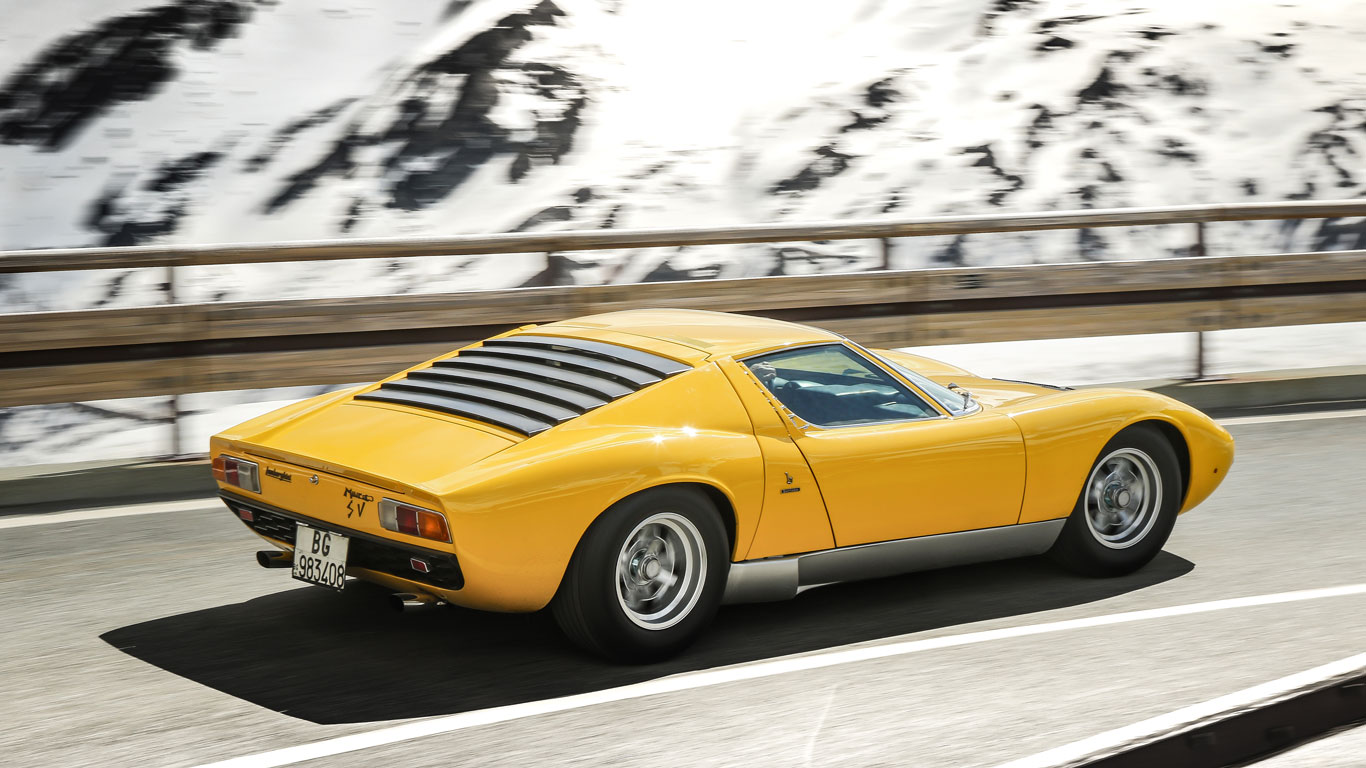 Lamborghini’s celebratory road trip passed without any incidents involving bulldozers, tunnels or the mafia, leaving us to drool over some of the most spectacular photographs you’ll see this year. We thought it was only right to share these images with you. After all, the Miura is considered to be one of, if not the, most beautiful cars ever made.

Michael Caine and Noël Coward were the headline acts in The Italian Job, but Lamborghini assembled an all-star cast of its own to create the Miura. Legendary designer Marcello Gandini was responsible for the styling, which would make its debut at the 1966 Geneva Motor Show. Here’s the man himself, alongside what must surely be his greatest creation.

The Miura was based on a chassis known as the 400 TP, developed by Gian Paolo Dallara (seen here second from the right), Paolo Stanzani (stood on the left) and Bob Wallace. At the time, Marcello Gandini was working at Bertone in Turin. Having seen the chassis, Nuccio Bertone reportedly said to Feruccio Lamborghini: “I’m the one who can make the shoe to fit your boot.” 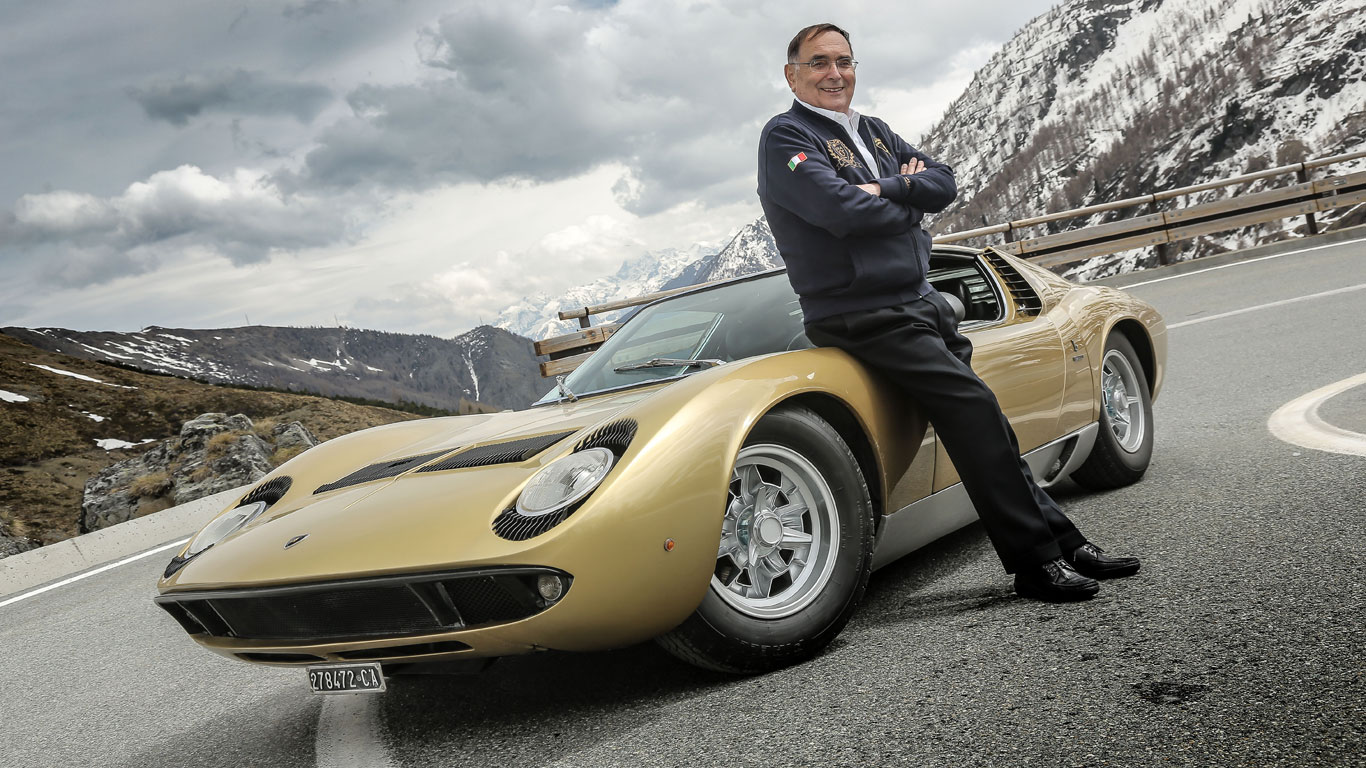 Gian Paolo Dallara joined Lamborghini in 1964 and worked on the chassis development of the Espada and Miura. Later he would design race cars for Frank Williams before establishing Dallara Automobil, which would enjoy great success in Formula 3 and IndyCar racing.

Legendary supercar engineer Paolo Stanzani played a key role in the development of the Miura. In the book, The Lamborghini Miura Bible, Stanzani said: “The Ford GT40 was the reference point for the Miura because of its height. With regard to the engine itself, the Mini was also a reference because of its transverse layout and the fact the gearbox was integrated with the engine.”

Even Signore Lamborghini himself never expected to sell more than 50 units, but the Miura was an instant success. It evolved from the original 350 hp 3.9-litre V12, through to the 370 hp Miura S and the iconic 380 hp Miura SV. To many, the Lamborghini Miura SV is the definitive version – the best of breed. 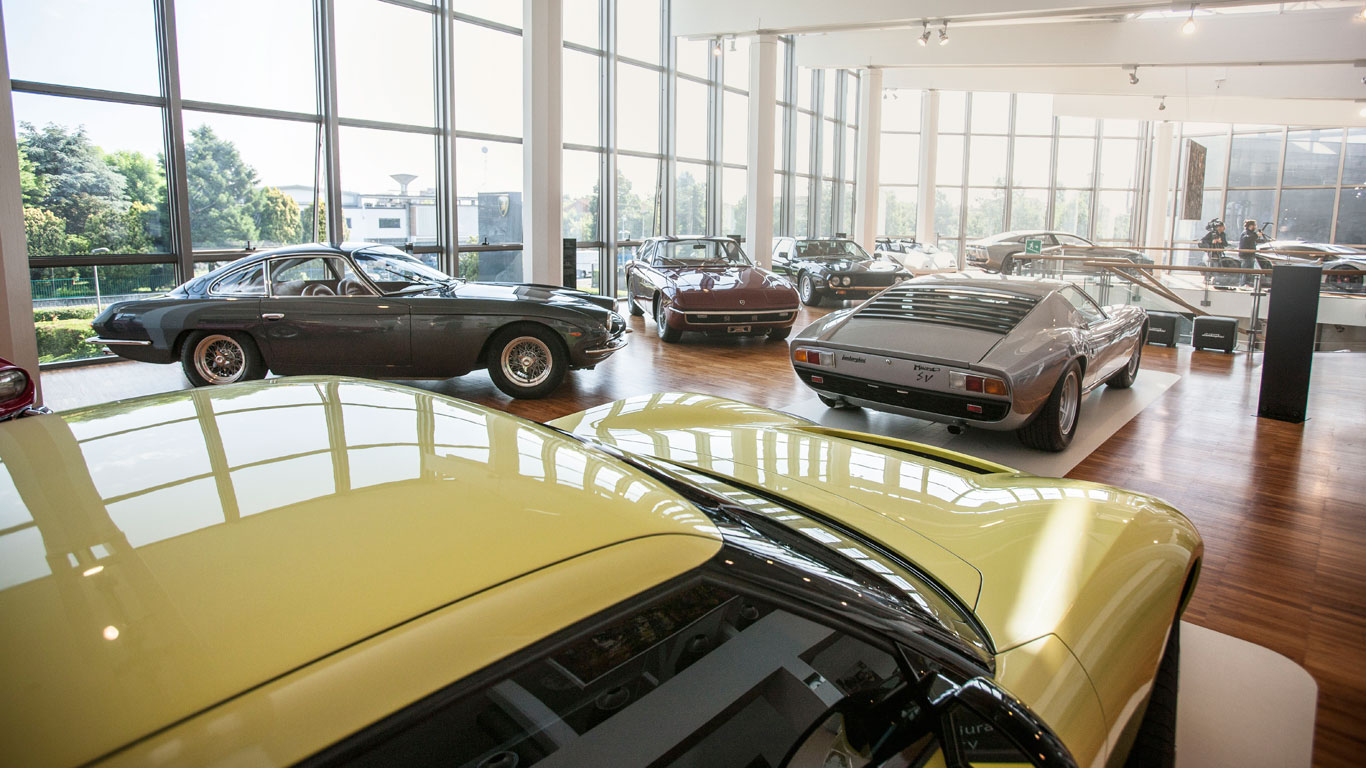 The ultimate road trip started at Sant’Agata Bolognese, home of the Lamborghini factory and museum. Lamborghini’s first car was the one-off 350GTV, before the Italian firm launched the 350GT in 1964. The 400GT was an extended version of the 300GT, featuring a pair of rear seats.

Lamborghini sent two Miuras along for the drive, which were joined by a selection of current V12 models, including the Aventador Coupe, Aventador Roadster, Superveloce and Superveloce Roadster. The hills were alive with the sound of V12…

Vehicles from Anas, the government-owned Italian company that builds and maintains roads, along with the Polizia Stradale, escorted the cars up to the Great St. Bernard Pass, which was opened on a one-time basis for the event. If you happen to be Lamborgini, such privileges are extended to you. Especially in Italy. 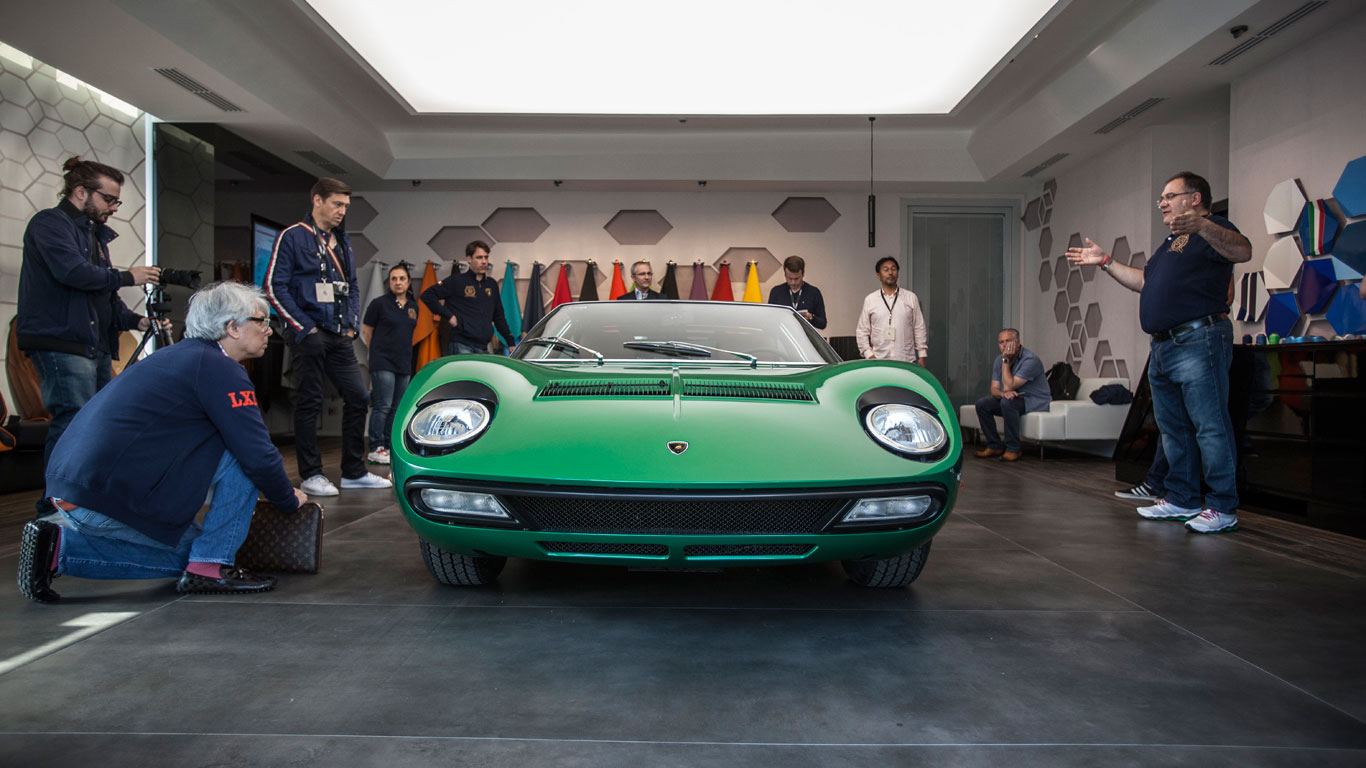 On display was the Miura chassis number #4846 – the first car to be restored by Lamborghini PoloStorico. This fledgling part of the business opened its doors in 2015 and was established to support Lamborghini in four main areas, namely: restoration, archiving, spare parts and certification.

This was the original Lamborghini Miura SV shown at the 1971 Geneva Motor Show – a car that won the Trofeo BMW Group Italia award at Concours d’Elegance Villa D’Este in 2016. It was treated to a nuts and bolts restoration before being finished in the stunning metallic green Verde Metallizata.

The Lamborghini Miura S was launched at the 1968 Turin Auto Show and answered many of the questions surrounding the original car. Power was increased to 370 hp, up 20 hp on the original, while the new car also benefited from a more luxurious interior. 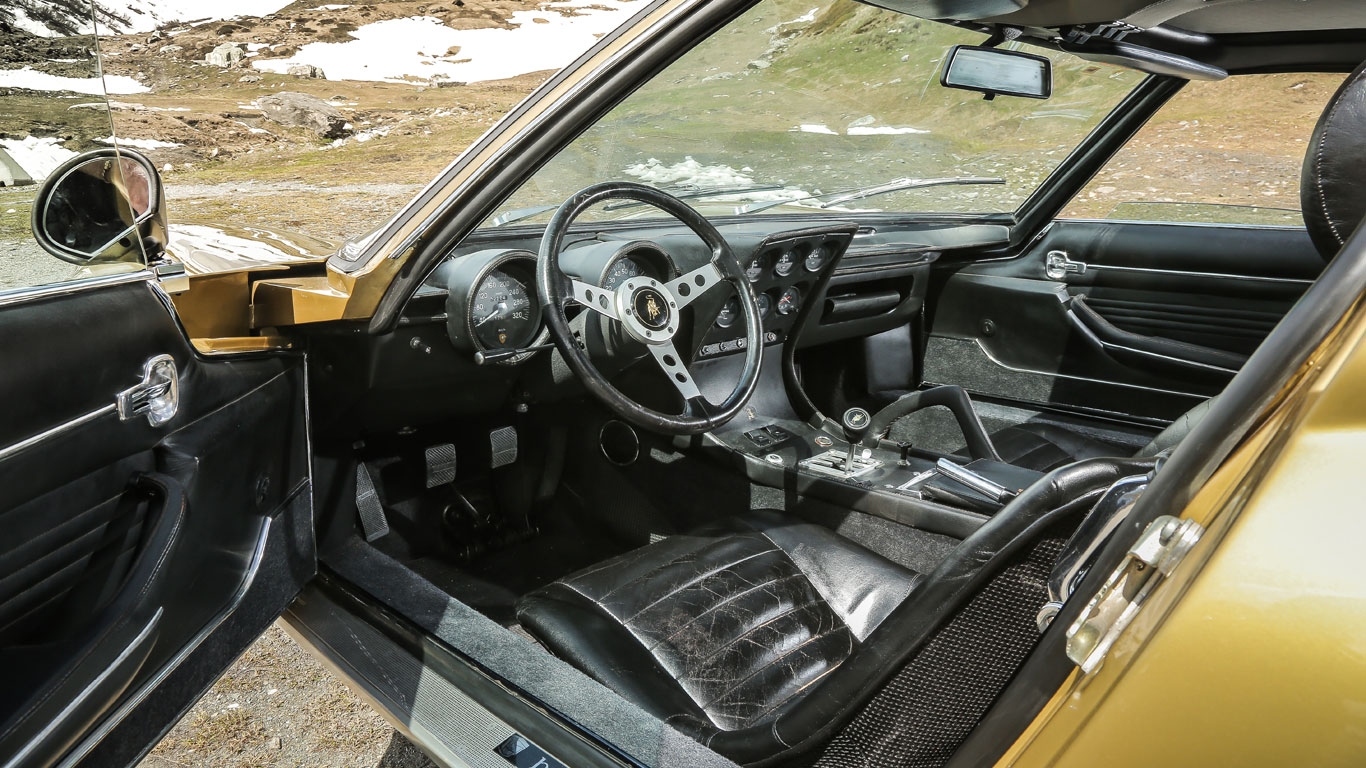 On the outside, the Miura S featured additional chrome detailing, along with the metal S badge on the tail. It was styled to look like a lightning bolt.

According to Ferruccio Lamborghini, the SV was the “definitive and absolute version of the Miura” so if you’re after a slice of Italian exotica, this is the one to go for.

Overshadowed by the Countach 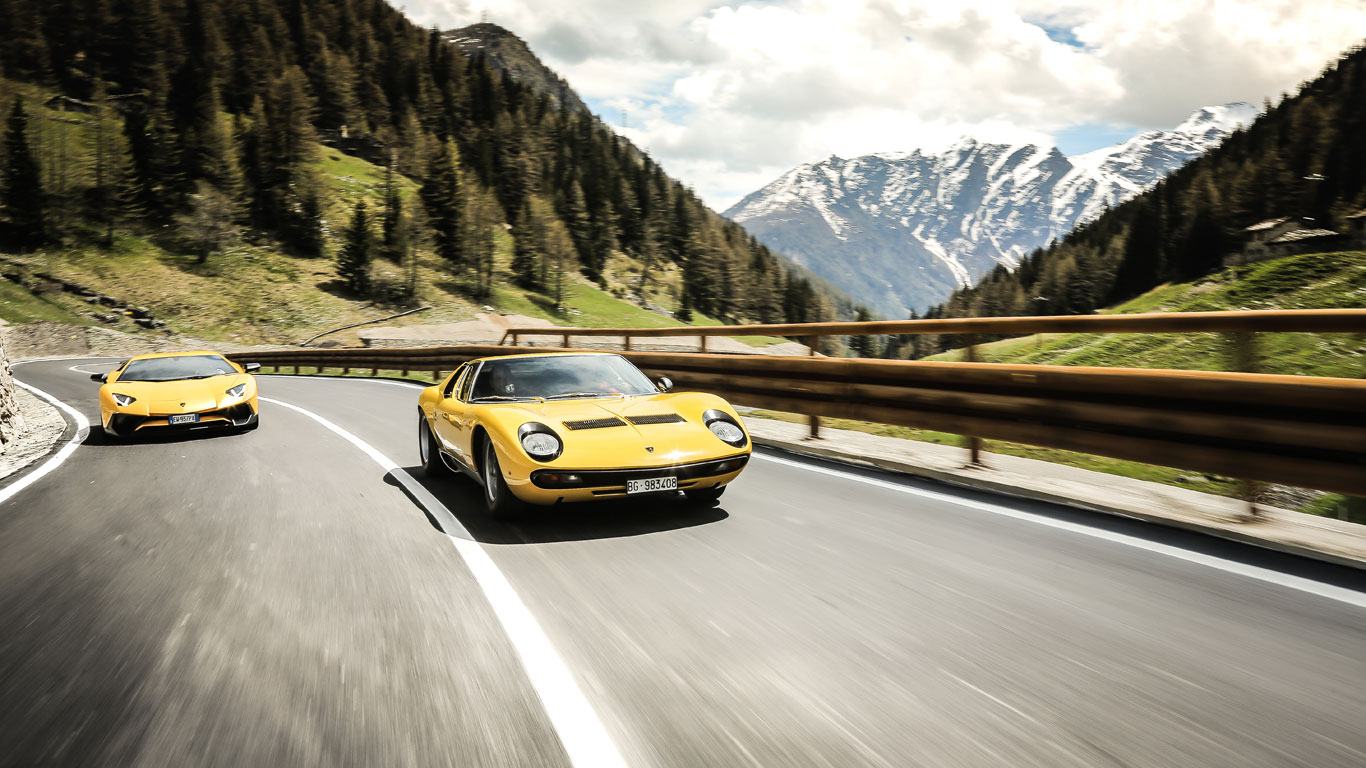 Remarkably, its launch was overshadowed by its replacement – the Lamborghini Countach. The Miura SV was unveiled alongside the Countach L500 prototype at the 1971 Geneva Motor Show, but the Countach stole the show. The sorcerer being upstaged by the apprentice?

The SV — or Sprinto Veloce — was a fitting swansong for the Miura – a last hurrah before it made way for a new icon. This was the Miura the world had been waiting for – the ultimate incarnation. Note the SV logo on the tail.

Power was increased to 380 hp, while Lamborghini also improved suspension. Aside from the SV badge, you can spot a Miura SV thanks to the wider rear arches and new taillights. 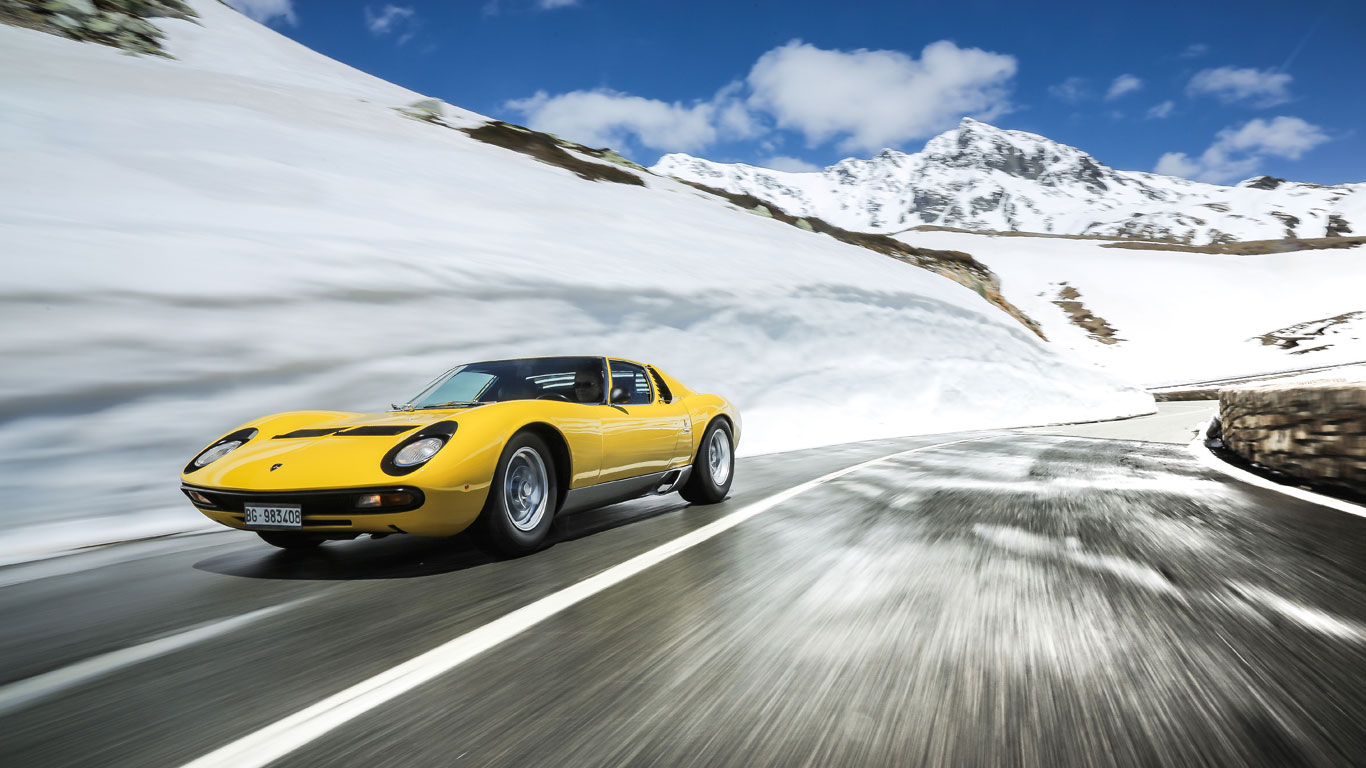 The Miura SV also signalled the end for the ‘eyelashes’ – one of the car’s most iconic features. Here you see the new lights on the Miura SV…

While, the earlier Miura S features the famous ‘eyelashes’ around the headlights.

The Lamborghini Miura SV was available via special order and a total of 150 units were built by the factory. Ten years ago, when celebrating the 40th anniversary of the Miura, Lamborghini unveiled the Miura Concept. It was like rebooted version of a masterpiece. 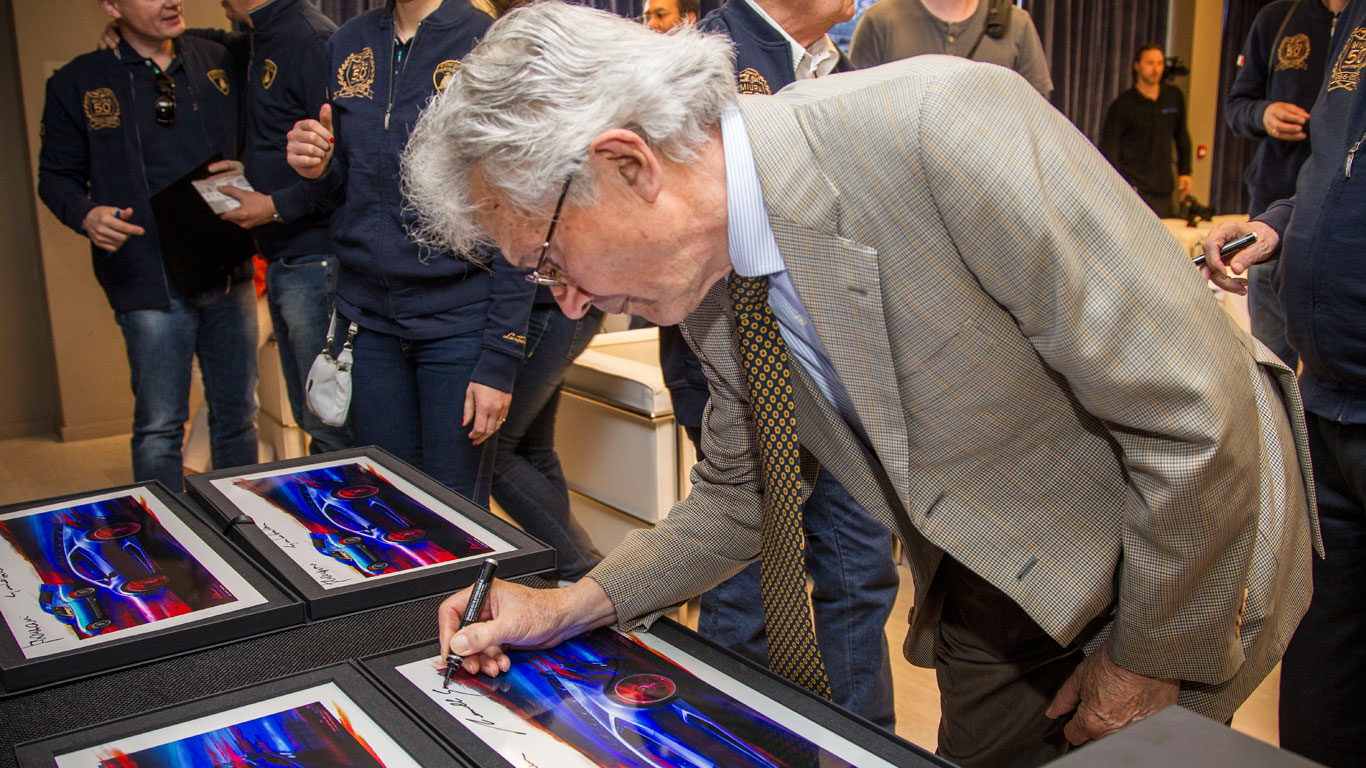 Naturally, it lacked the impact and elegance of Gandini’s masterpiece, But how do you improve on perfection?

As for The Italian Job Miura, you’ll be pleased (if unsurprised) to discover that the car sent tumbling off the side of a mountain was merely a shell. That said, the car used during the driving sequences was feared lost.

It had been sold shortly after filming had finished – before later turning up in an underground car park in Paris. It had covered a mere 11,800 miles and showed no signs of a brief encounter with a bulldozer. The Miura S taking part in the 50th anniversary drive also made it back to the factory without incident. 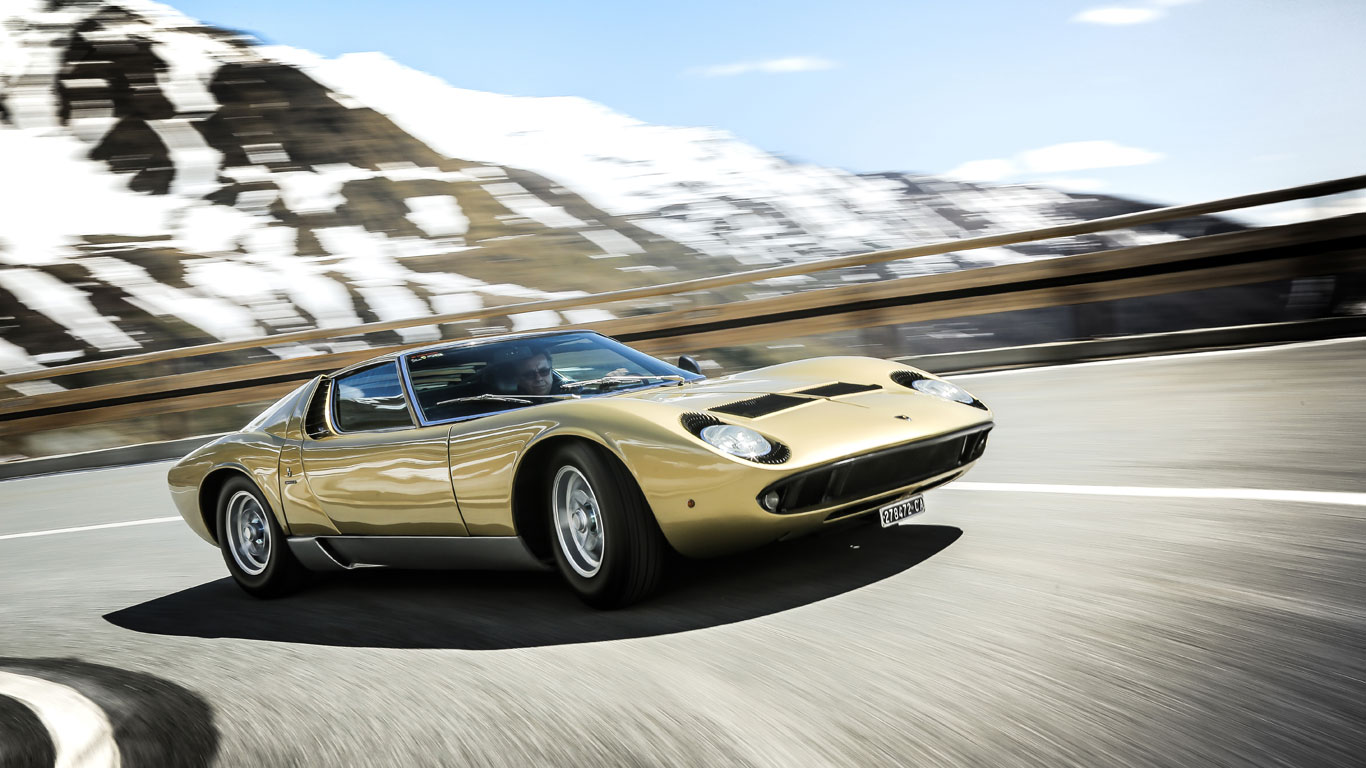 The Miura name is thanks to Eduardo Miura, a breeder of Spanish fighting bulls. He was also responsible for designing the famous Lamborghini badge.

The Great St. Bernard Pass is the third highest road in Switzerland, connecting the Swiss town of Martigny with Aosta in Italy. It represents an important route between Geneva and Turin, but if you fancy recreating the drive for yourself, it’s worth noting the road is closed from November to June. Unless you happen to be Lamborghini.

Production at the Sant’Agata Bolognese factory continues, but while the Miura represents Lamborghini’s past, the Huracan and Aventador represent its present and future.