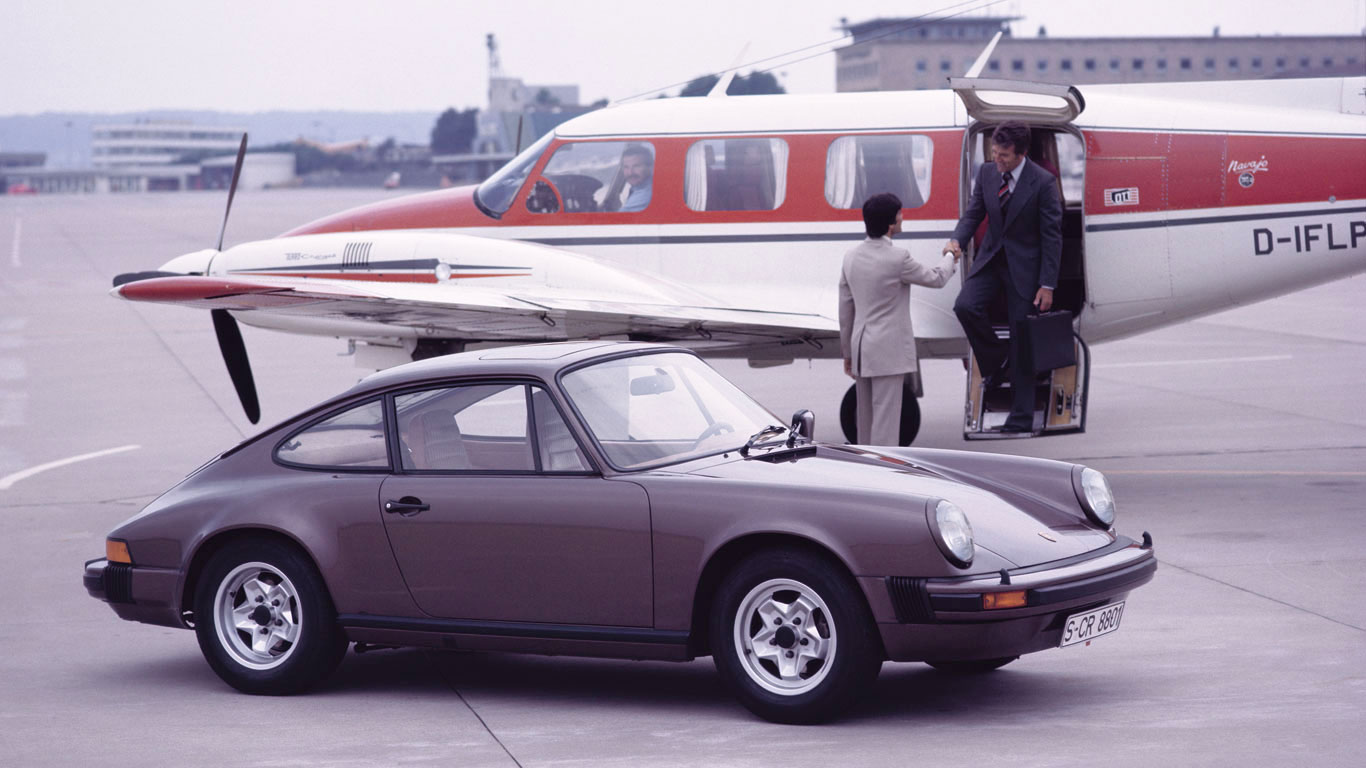 It should have died in the late 70s, but the combination of continuous development, careful management and success on the track has kept the Porsche 911 at the very top of the sports car game.

Launched in 1963 – but with development work stretching back to the late 50s – this is the story of the classic Porsche 911. 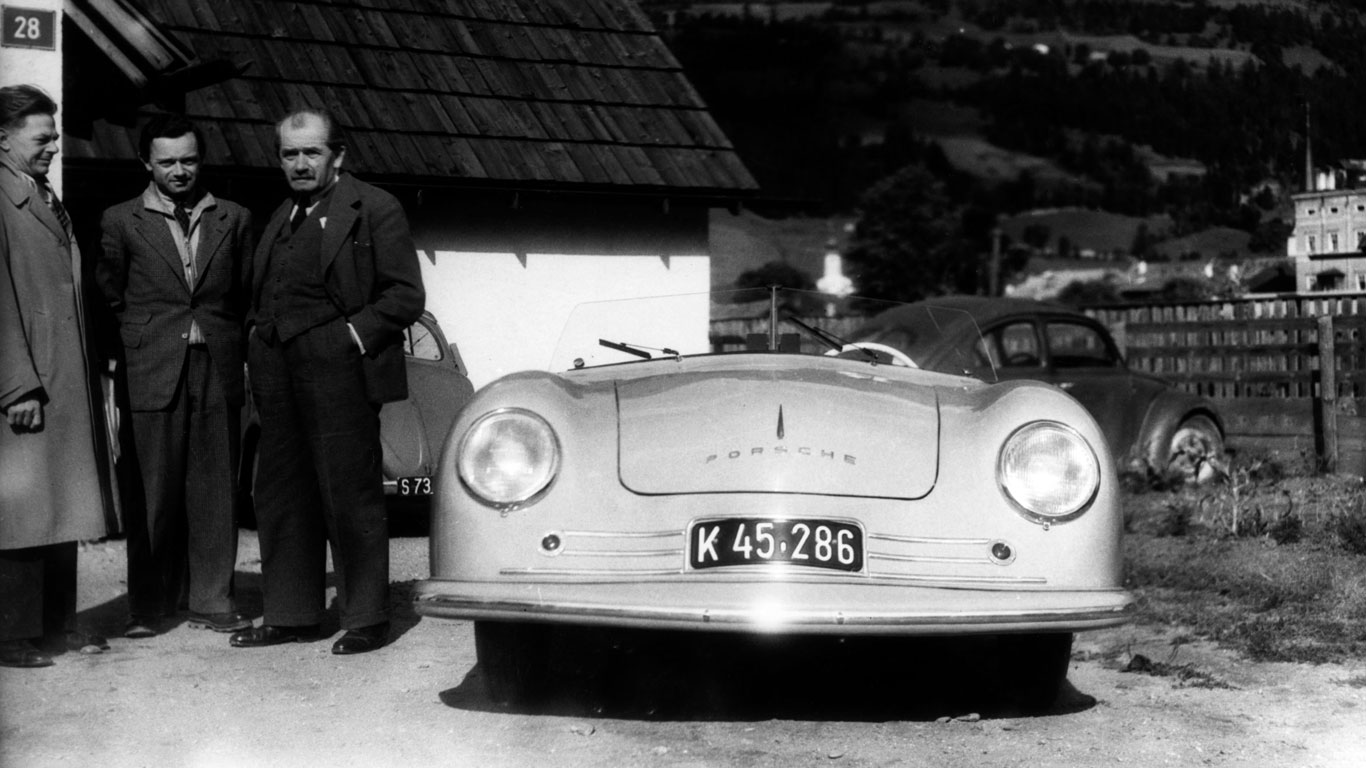 The story begins in 1948 with the Porsche 356 hand built in a former sawmill in Gmünd, Austria. Car number one, pictured here with Ferdinand Porsche (right), Ferry Porsche (centre) and engineer Erwin Komenda (left), was based on Volkswagen mechanicals. Powered by a mid-mounted 1,131cc engine, 356/001 was capable of hitting 80mph and proved to a successful road-racer.

For the production version, the engine was moved to the rear, and 50 Gmünd cars were built before production moved to Stuttgart-Zuffenhausen. Porsche reached an agreement with Volkswagen to sell and service its cars through its organisation, giving the company access to a vast network, not to mention the endorsement of a well-known German brand. 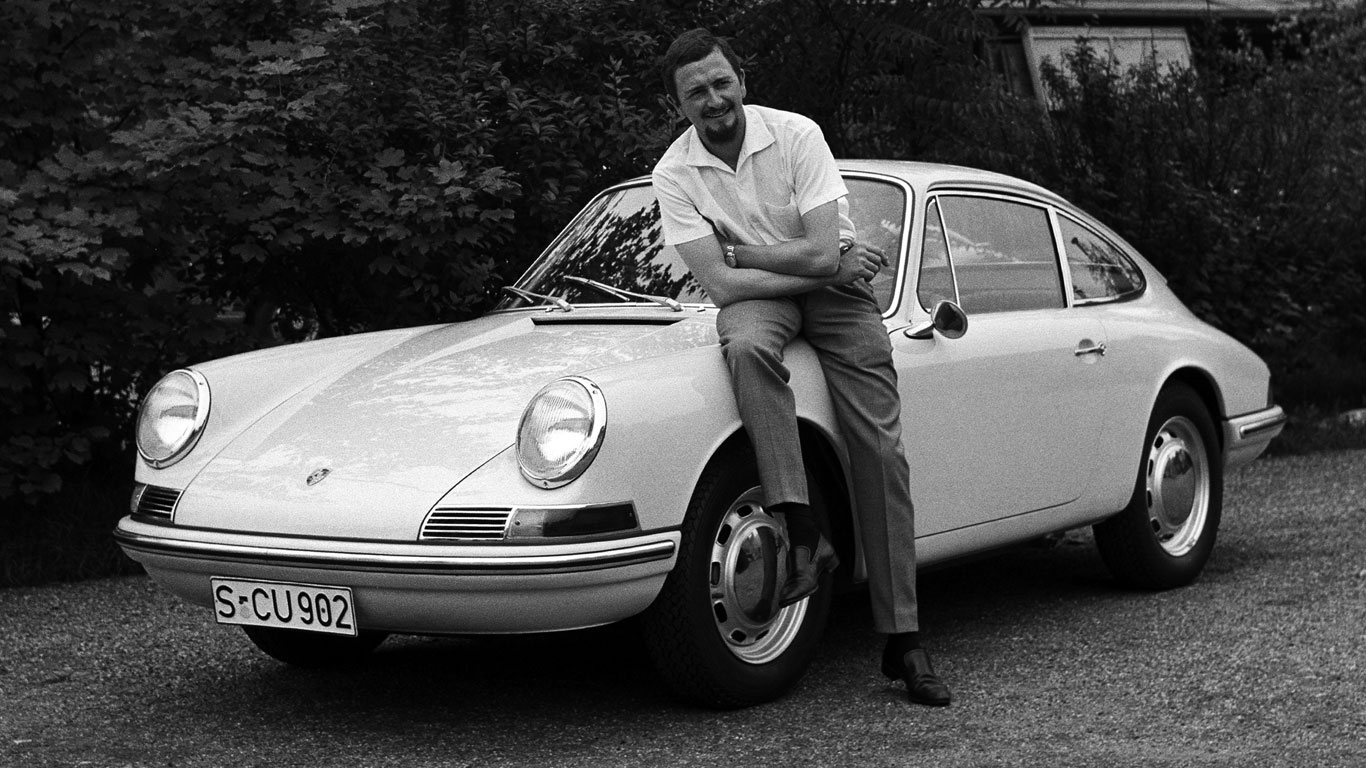 The 356 put Porsche on the map, established a client base and, most importantly, provided the financial stability to develop a new sports car to conquer the world. Development work began in 1959, and from the outset, it had a list of requirements to fulfil, namely: two seats in the rear, enough luggage space for a set of golf clubs, a blend of comfort and handling, along with a strong balance of performance and quietness.

A few ‘Type 7’ prototypes were built before the Porsche 901 was unveiled in 1963. This was the first entirely new Porsche since the 356 in 1948, but it didn’t remain the 901 for very long. Peugeot objected to the use of a three-digit number with a zero in the middle, forcing Ferdinand Porsche into a rethink. The answer was simple: change the zero to a one. 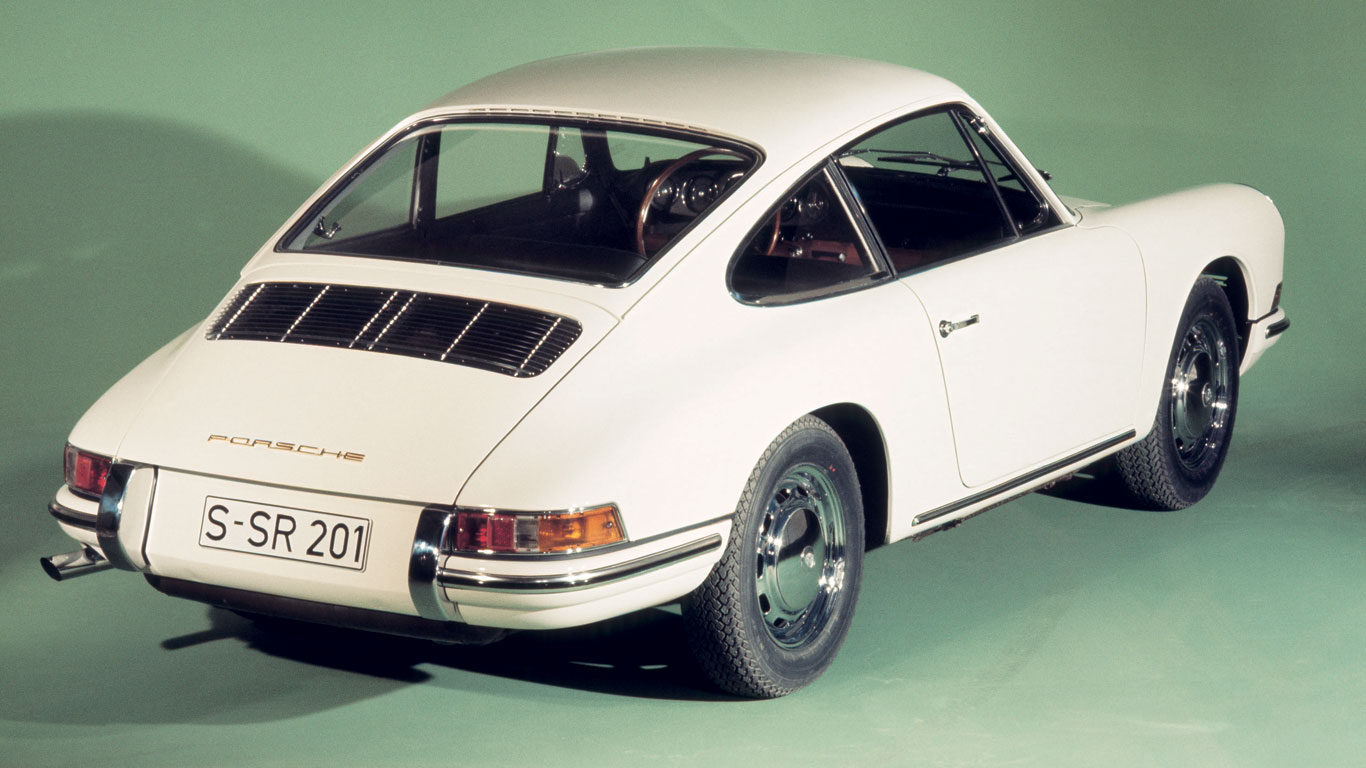 Although the influence of the 356 was evident, the Porsche 911 was almost entirely different. The styling, penned by ‘Butzi’ Porsche, introduced the timeless, aerodynamic profile that is unmistakably a 911, along with 2+2 seating, a rear engine, and five circular dials on the dashboard.

Power was sourced from a 2.0-litre flat-six engine developing 130hp, although this was increased to 160hp three years later. It was far from perfect, with Road & Track criticising the 911’s “animal oversteer”, while the testers at Autocar said that it could be tricky in the wet. The engineering solution was to lengthen the wheelbase by 57mm. 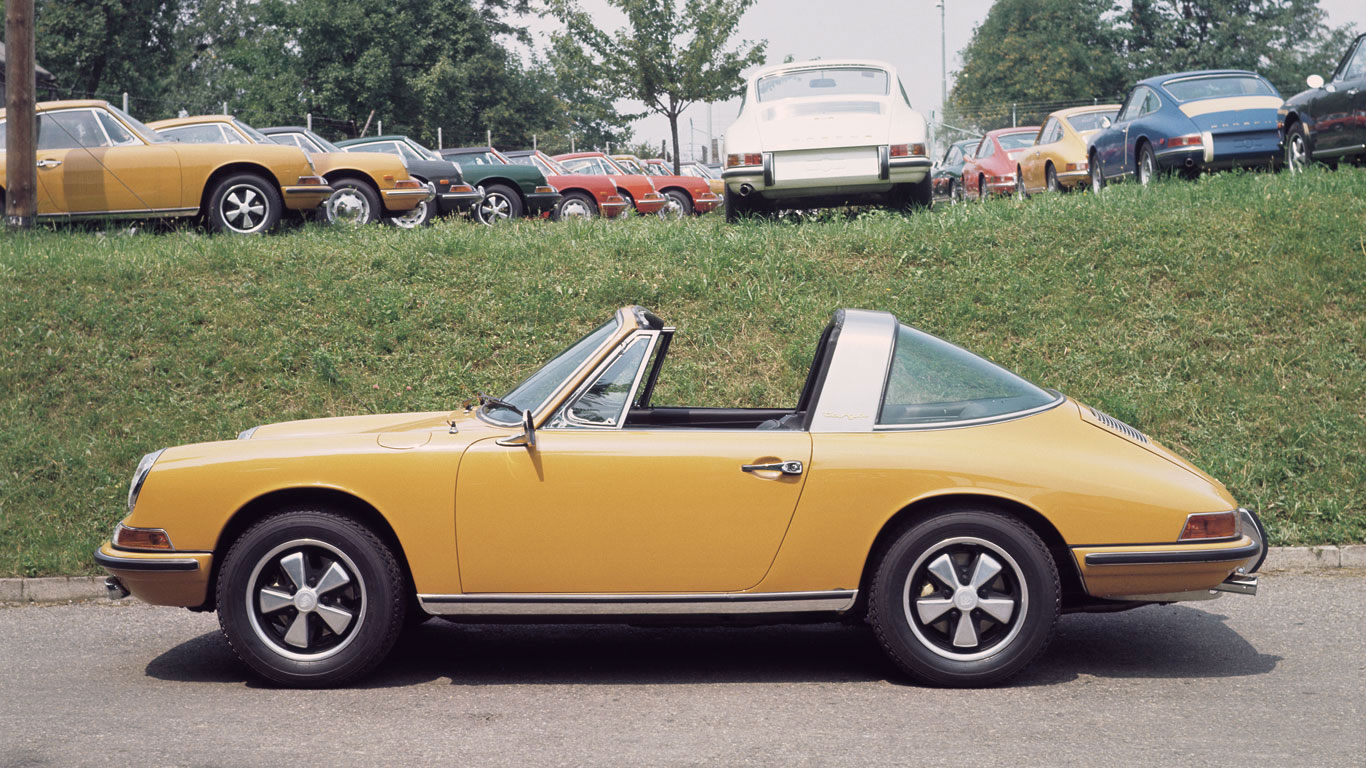 For the first three years of production, the 911 was produced in a single body style, despite many calls for an open version. Concerns about extra weight and a loss of structural rigidity – not to mention rumours that the US might ban open cars – meant that Porsche was reluctant to explore a topless 911.

With these thoughts in the background, Porsche introduced an entirely new body style, featuring the world’s first roll-over bar. The Targa – which is Italian for ‘shield’ – featured a removable roof that could be stored in the front compartment or behind the front seats. The fact that the name recalled famous victories at the Targa Florio was no coincidence. 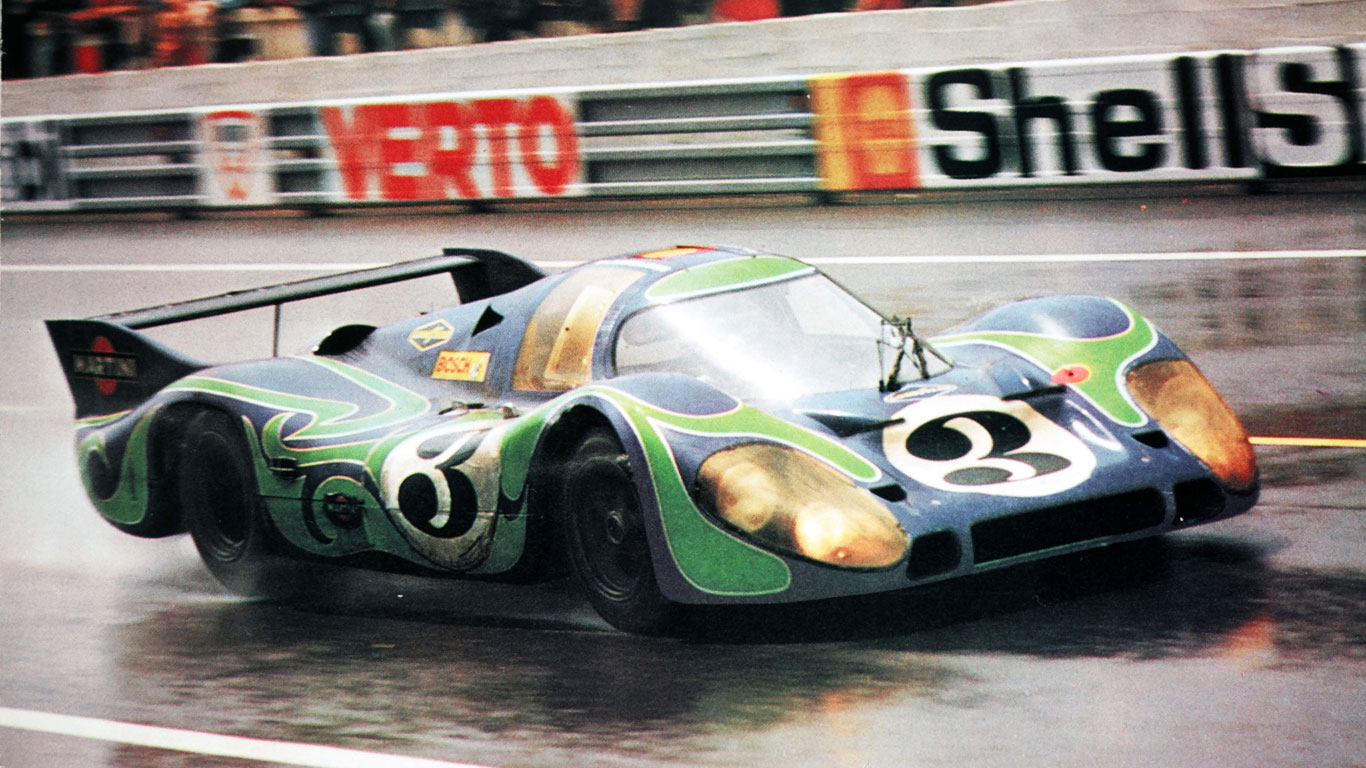 Success on the track had always played a central role in sales of the 911, but aside from a second place in 1968, Porsche hadn’t claimed an overall victory at Le Mans. All that changed in 1970, when the 917 gave Porsche its first win – followed by a second victory in 1971. The 917 was phenomenally successful, crossing the Atlantic to compete in the Can Am series. The picture shows car number 3 on its way to second place at the 1970 Le Mans. 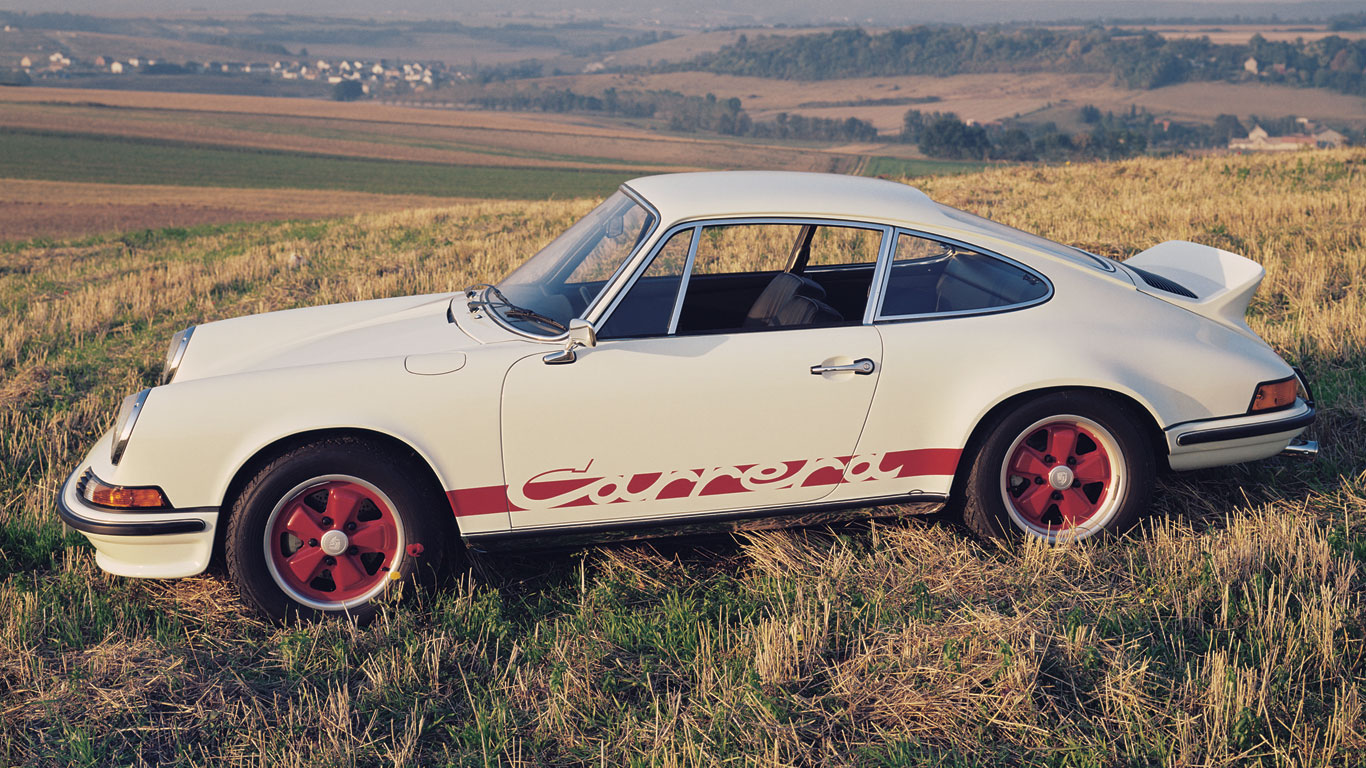 We’ve reached the midpoint of our gallery, but the Carrera 2.7 RS represents the highpoint of the classic 911. The Carrera name – which means ‘race’ in Spanish – was first used in 1955 to celebrate a class victory in the 1953 Carrera Panamericana road car. Conceived to satisfy homologation rules that would allow Porsche to compete in Group 4 racing, the 2.7 RS (RennSport) was powered by a 2.7-litre engine producing 210hp and 188lb ft of torque.

To save weight, these models featured thinner-gauge steel, while thinner glass was used for the windscreen and rear quarter windows. Visually, the RS models were distinguished by the wider rear arches housing 7×15 Fuchs alloys, along with the famous ‘ducktail’ spoiler (a delete option) and optional side stripes. 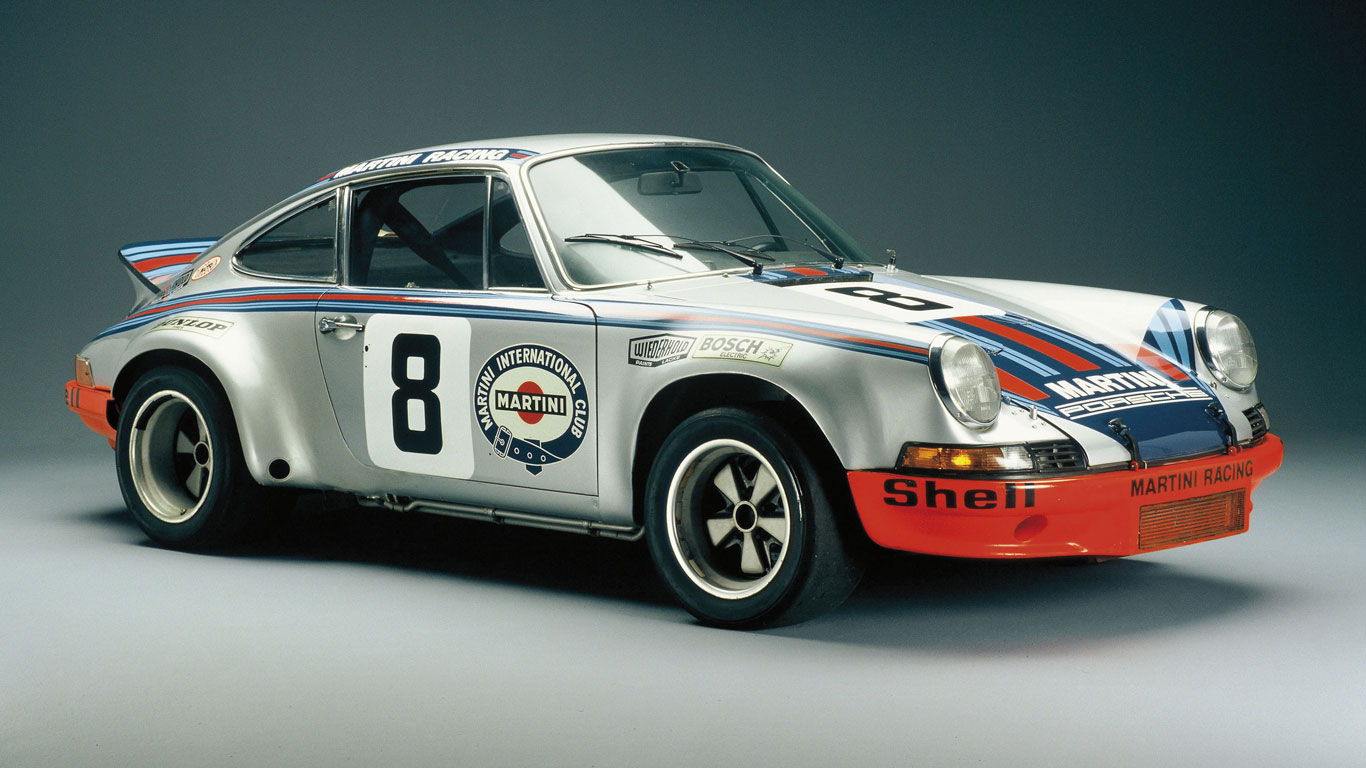 The vast majority of the Carrera 2.7 RS models built were Touring spec, while 200 people opted for the stripped-out Sport. Porsche intended to build 500 RS cars, but faced with unprecedented demand, production was increased to more than 1,000.

Pictured is the 1973 Carrera RSR: a 900kg lightweight 911, initially delivering 300hp from a 2.8-litre engine, but later producing 330hp from 3.0-litre. It began its racing career by winning the 1973 Daytona 24 Hours, before dominating the GT class in the European Championships.

Pull up to the bumper, baby 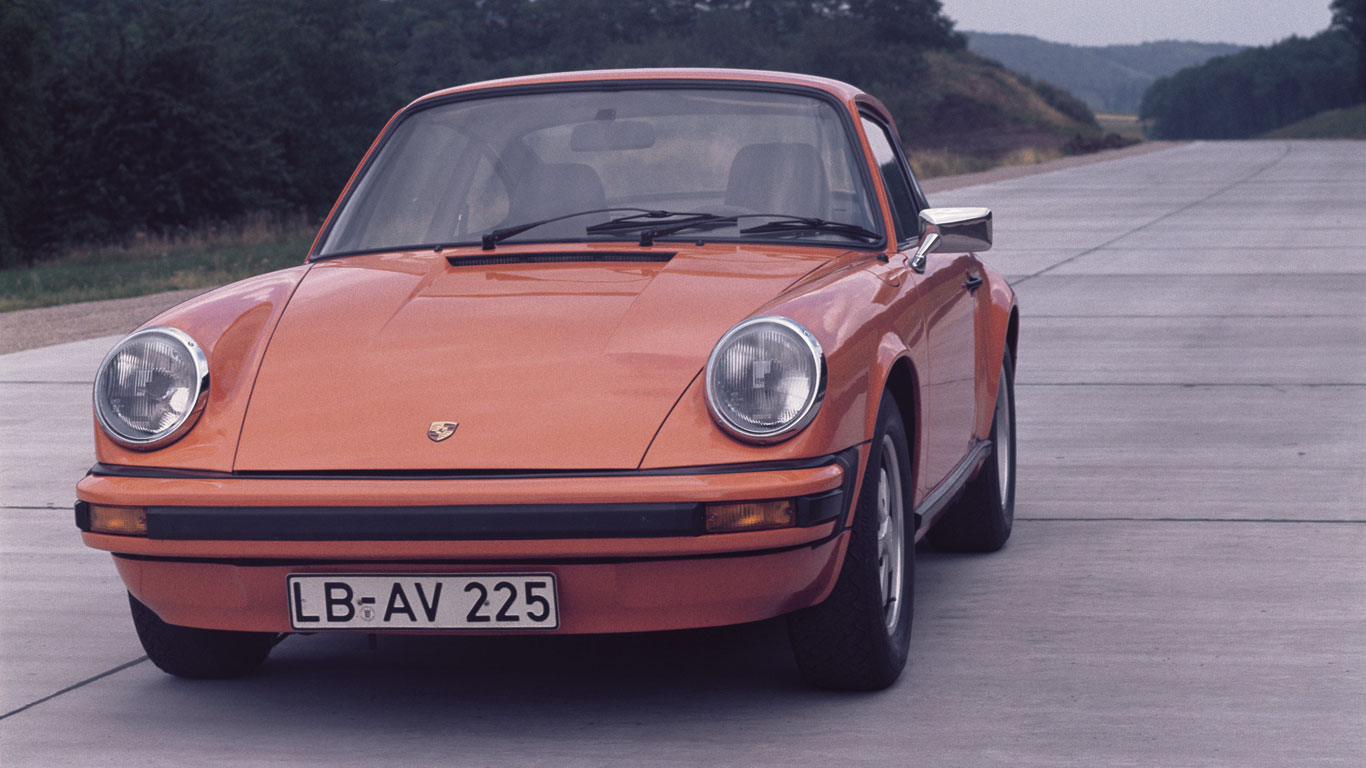 Away from the track, the Porsche 911 was facing attacks of a different kind. Sales fell by 25 percent during the fuel crisis of 1973, while US safety regulations threatened its styling, if not its survival. Witness the changing face of the MGB for evidence of what energy-absorbing bumpers can do for a sports car’s styling.

Which means that Wolfgang Möbius, the chap responsible for the US-friendly facelift, is one of the 911’s unsung heroes and deserves a great deal of credit for his work. Far from detracting from the look of the classic 911, the energy-absorbing bumpers actually enhanced the car’s image and led to an increase in sales. 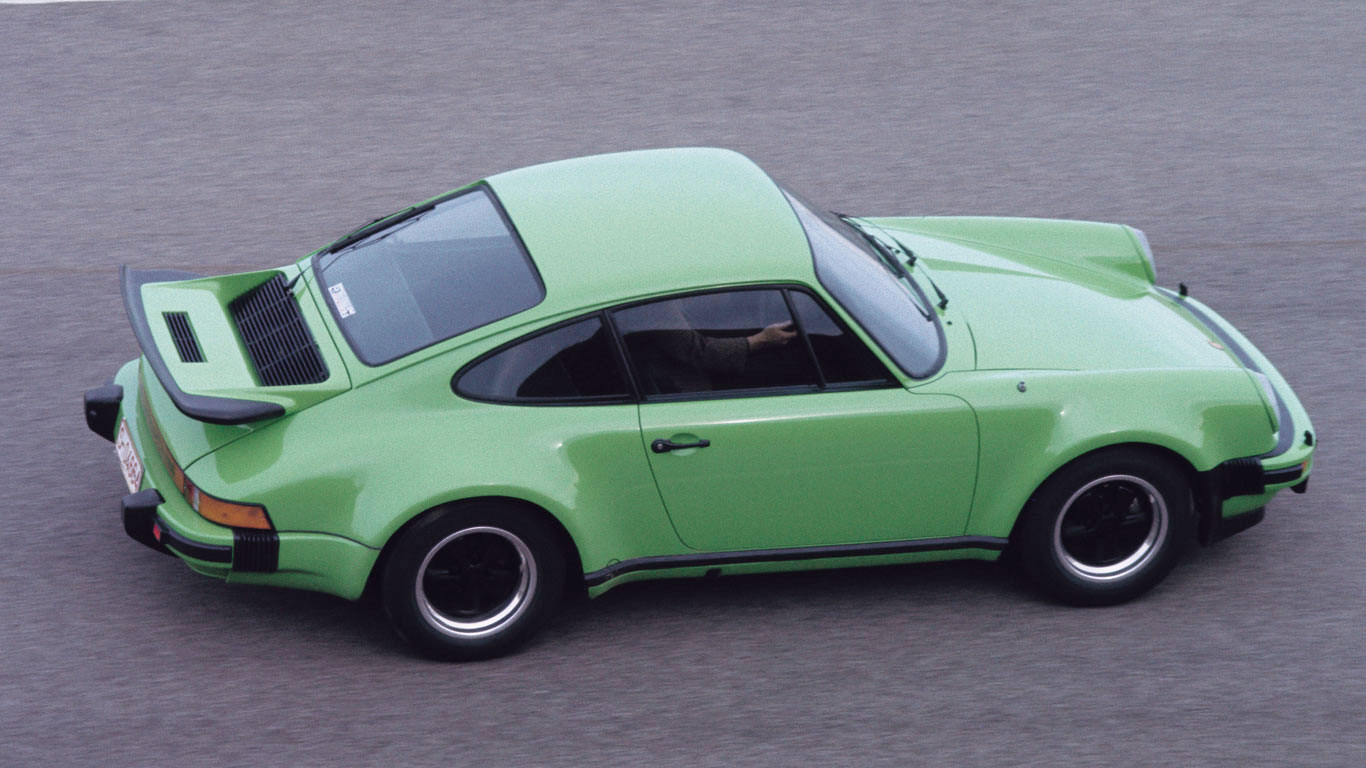 While the Carrera 2.7 RS might be the choice of the purist, the 911 Turbo – or 930 Turbo – is, to the man on the street, the definitive classic 911. Turbocharging had been used to great success on the track, most notably the flat-12 917, so it was only a matter of time before it made its way into Porsche road cars.

The 911 Turbo was the first series sports car in the world to feature an exhaust-gas turbocharger, and dealers initially sold it as a limited-edition special. But the planned 500 production run was soon doubled, and the Turbo’s future as a mainstream model was secured. 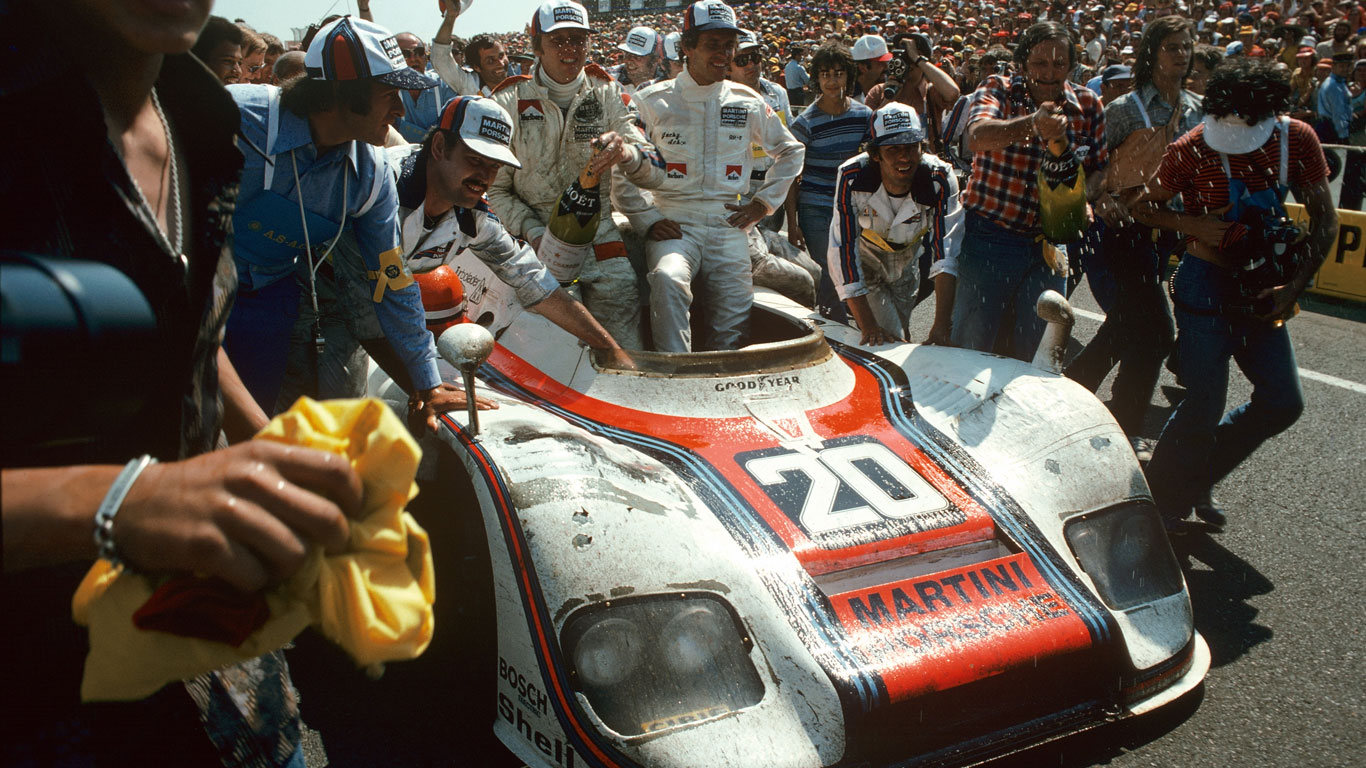 Meanwhile, turbocharging continued to deliver on the track, with the Porsche 936 romping to victory in three successive Le Mans races. It was powered by a 2,142cc turbocharged version of the engine used in the 911 Turbo, tuned to deliver over 500hp.

In 1975, Porsche had celebrated 25 years of sports car production with the launch of the Silver Anniversary edition. A total of 1,063 cars were built, each one based on 911 and 911S models. 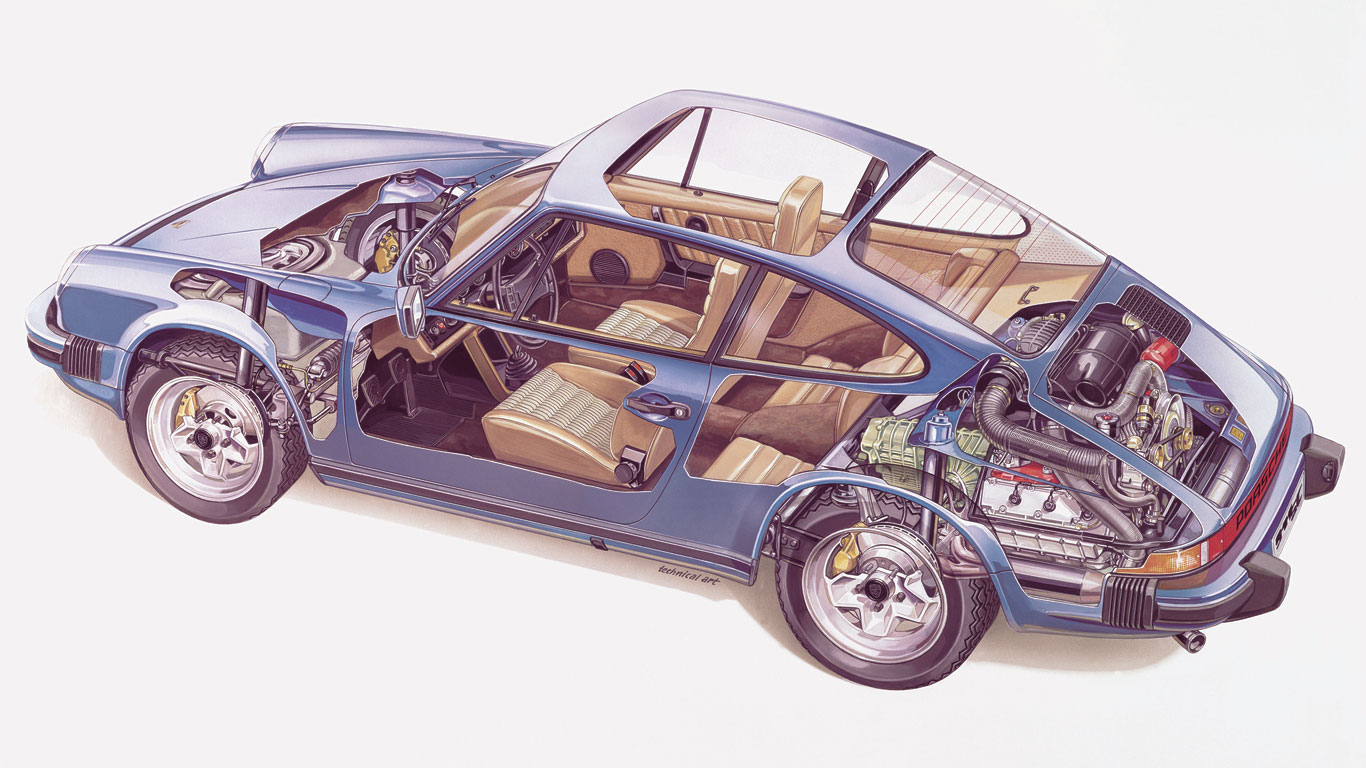 It had seen off the threat of safety and emissions regulations, but in the late 70s, the 911 faced an enemy from within. The Porsche 928 was designed and developed to be the 911’s successor, but as history will recall, the 911 not only outsold the 928, it also outlived it.

In 1978, Porsche launched the 911 SC (Super Carrera) – its first attempt at building a world car. It featured a fully galvanised body and was powered by a more reliable 3.0-litre engine developing 180hp. But the SC was also heavier, so Porsche upped the power, initially to 188hp, and later to 204hp. 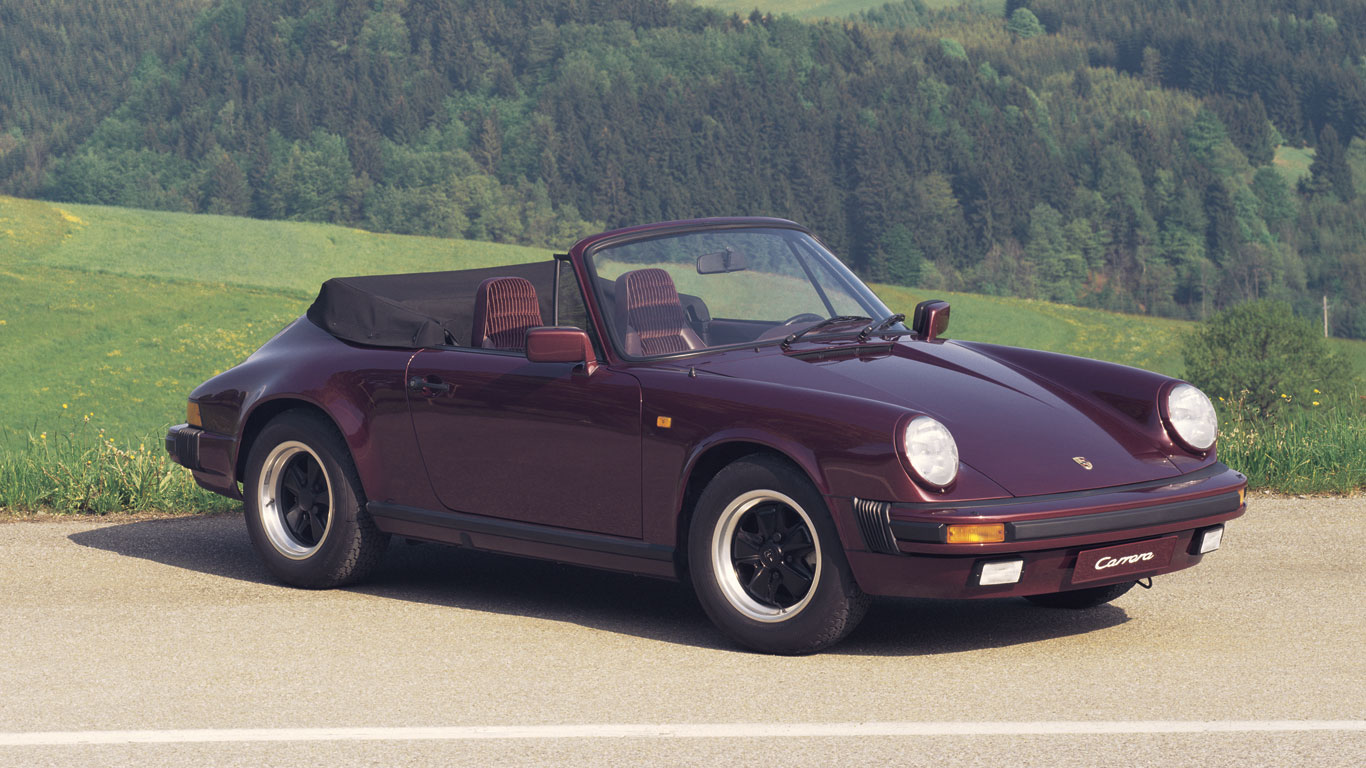 The 911 appeared to be on borrowed time. The combination of the 928 and the launch of the 944 meant that production was expected to cease in 1981, but the 911 refused to go down without a fight. CEO Dr Ernst Fuhrmann felt that the 911’s time was up, a view that led to his early retirement.

He was replaced by Peter Schutz, who arrived from Caterpillar, and while the internal focus appeared to be on the forthcoming 959, the 911 showed that it still had legs. A 911 Turbo Cabriolet concept was introduced in 1981 to gauge public opinion, before an SC-based 911 Cabriolet was unveiled in Geneva in 1982. It was to become the first production Cabriolet since the 356. 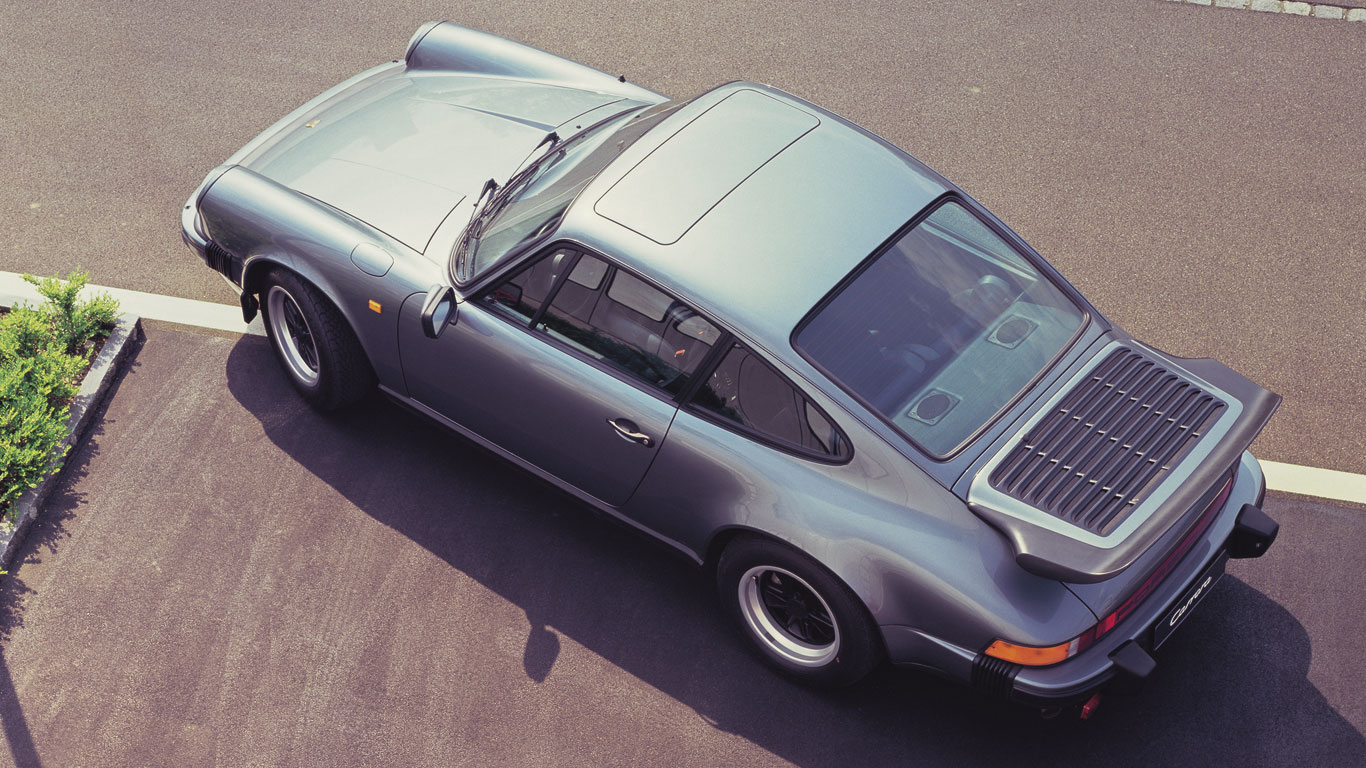 The target audience was changing. The 911 enthusiasts remained, but the car was attracting a new customer, interested not in torque figures and steering feedback, but image and glamour. Asked to associate a single car with the ‘yuppies’ of the 1980s, most people would point to the Porsche 911.

The 3.2 Carrera was the final significant development of the classic 911. Introduced for the 1984 model year, the 3.2 was a hugely successful model – some 21,000 units were produced in 1985. All models, whether Coupe, Targa or Cabriolet, were designated Carrera, leading to cries that Porsche had sullied the once-great name. From 1984, the 3.2 Carrera could be ordered with a Turbo body, while variants included the Club Sport, Anniversary and Speedster. 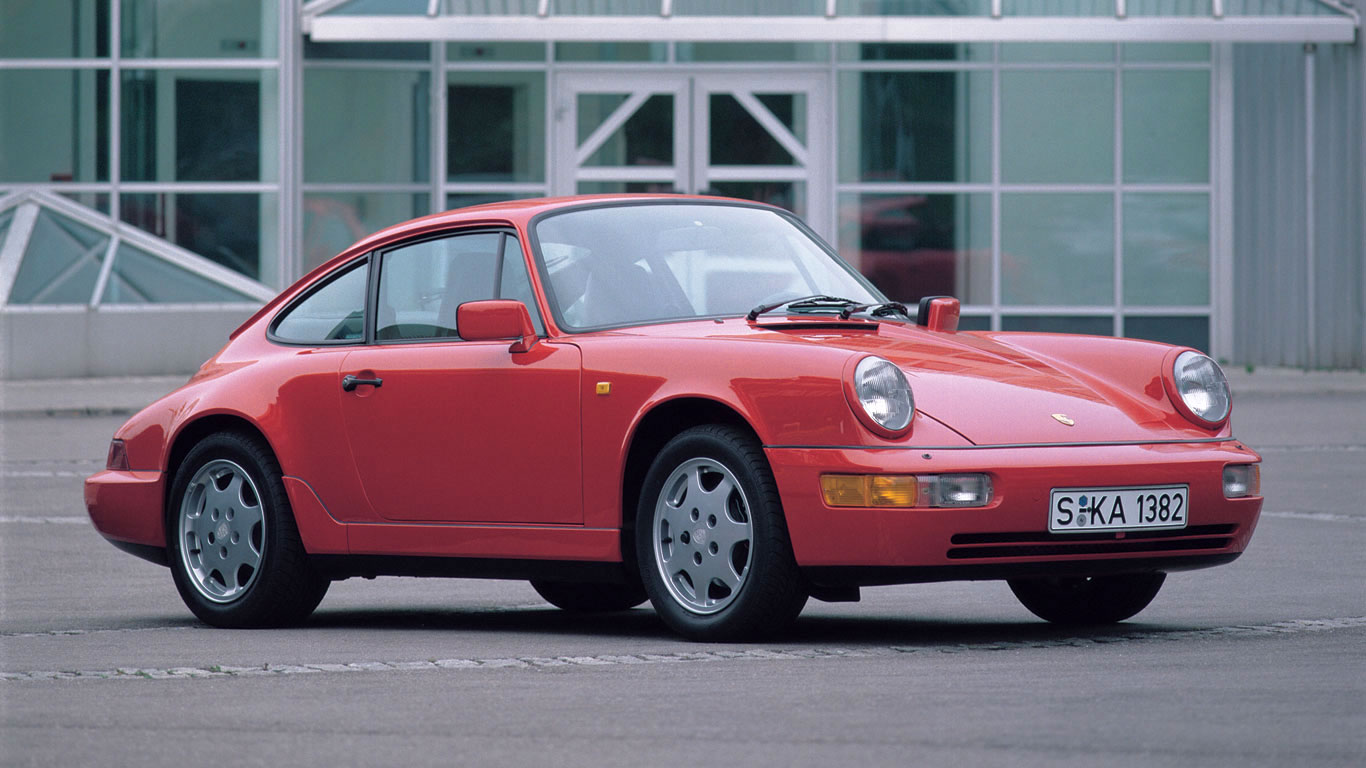 Until the arrival of the 964 in 1989, all 911 models could be traced back to the 901 of 1963, but this new car was a different proposition. It might have looked remarkably similar – why mess with such timeless styling – but under the skin, it was 87 percent new. It ushered in a new era for the Porsche 911, but that’s a story for another day.