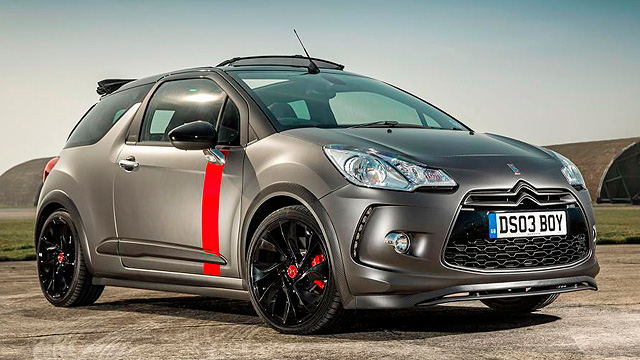 Citroen has announced the DS3 Cabrio Racing will retail at £29,305 – and has confirmed it will bring just 10 examples into the UK!

The ultra-limited edition car (which is on sale now) is, as its name suggests, the open-roof version of the acclaimed DS3 Racing. It boasts the same 207hp 1.6-litre turbo engine and is capable of 145mph. It dispatches 0-62mph in 6.5 seconds – faster than models such as the new MINI Cooper S.

Citroen justifies it by saying that this is a model that’s been extensively redeveloped by Citroen Racing. The engine has 30% more power, for example, courtesy of a Citroen Racing ECU remap, revised turbo system and new exhaust system.

It’s finished in matt grey, with complementary black finish for the roof and alloys; vivid Brilliant Red DS-logo’d centre caps and red brake calipers contrast with it, although the vertical stripe on each door is perhaps a little more striking.

It’s a similar theme inside, and there’s a numbered plaque down by the gearlever. Citroen can afford to splash out with the finish of these: after all, it’s not like it has to make many…