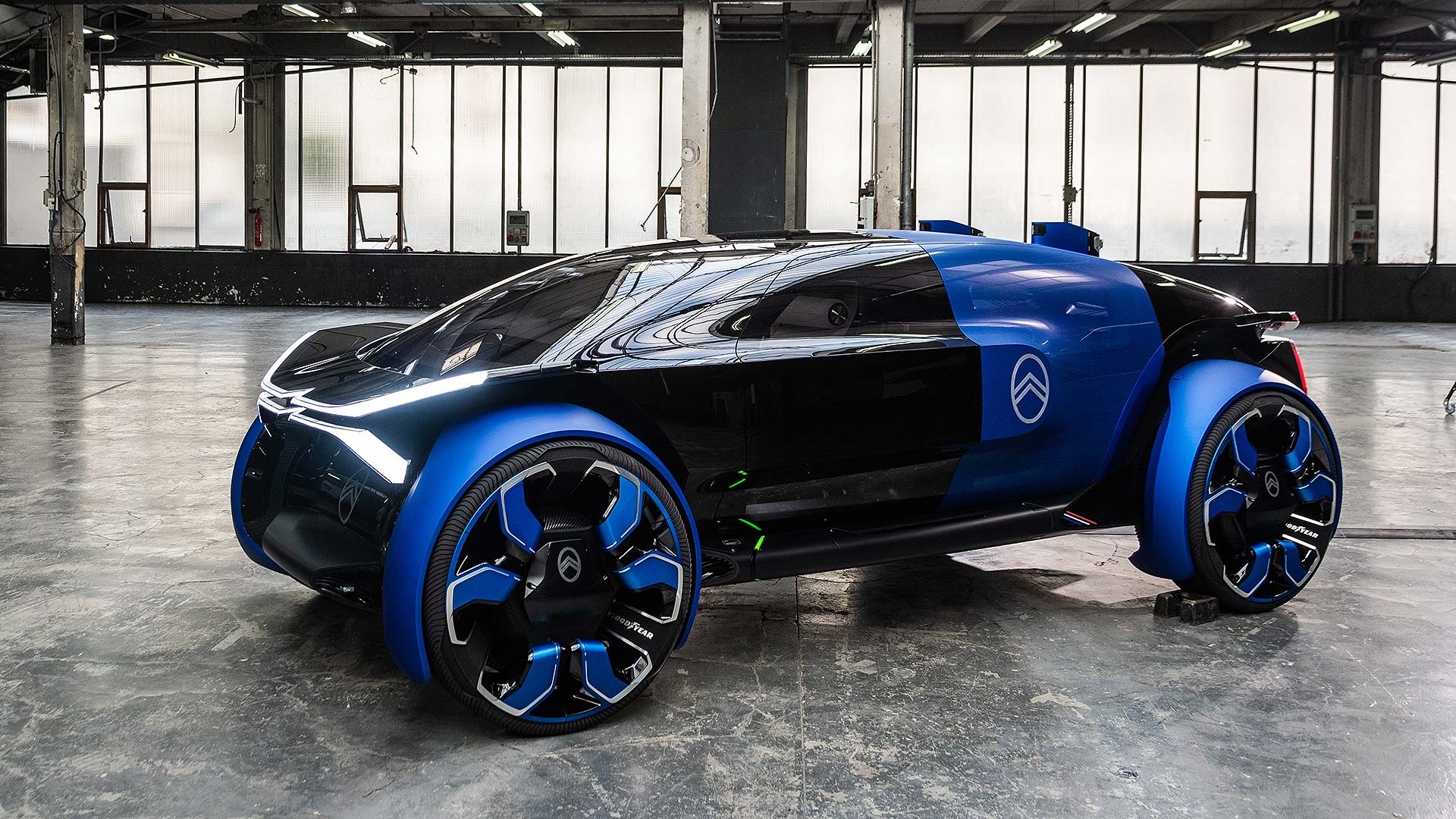 Citroen has unveiled the crazy-futuristic 19_19 Concept as a celebration of its centenary year. The clue is in the name, as they say: but it’s the next 100 years this model is previewing, rather than harking back to the past.

There’s no denying Citroen’s claim that this car is “deliberately unconventional”. In the pantheon of fantastical pie-in-the-sky concepts, something Citroen is famously excellent at, the 19_19 takes it to the next level. 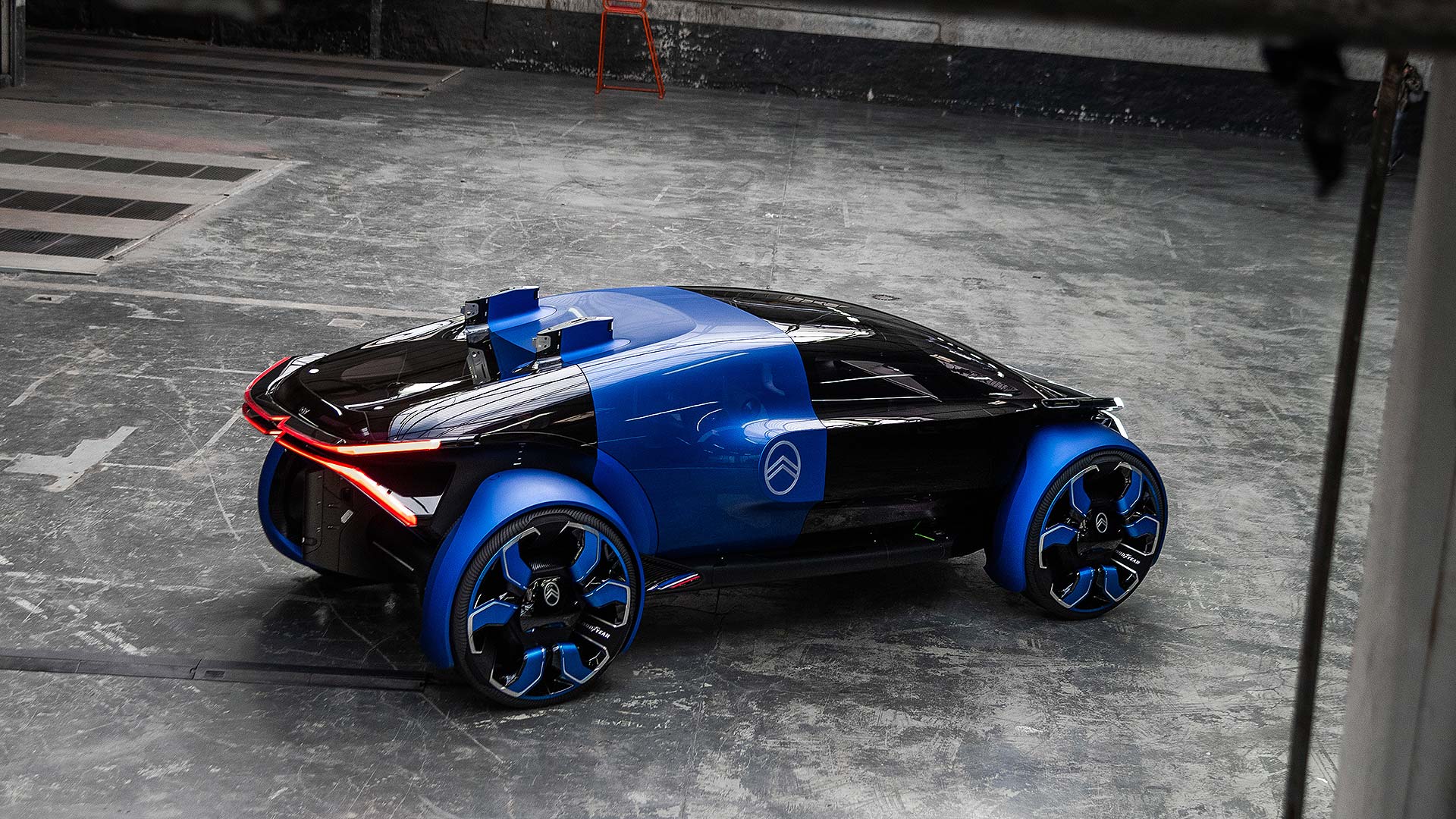 The marque calls it “a disruptive Citroen manifesto that rewrites the rulebook and illustrates a vision of mobility that is deliberately unconventional, future looking and constraint free”.

It also says the 19_19 Concept delivers 21st century comfort with the suspended cabin running on a version of Citroen’s Progressive Hydraulic Cushion suspension for newfound levels of isolation from the road. 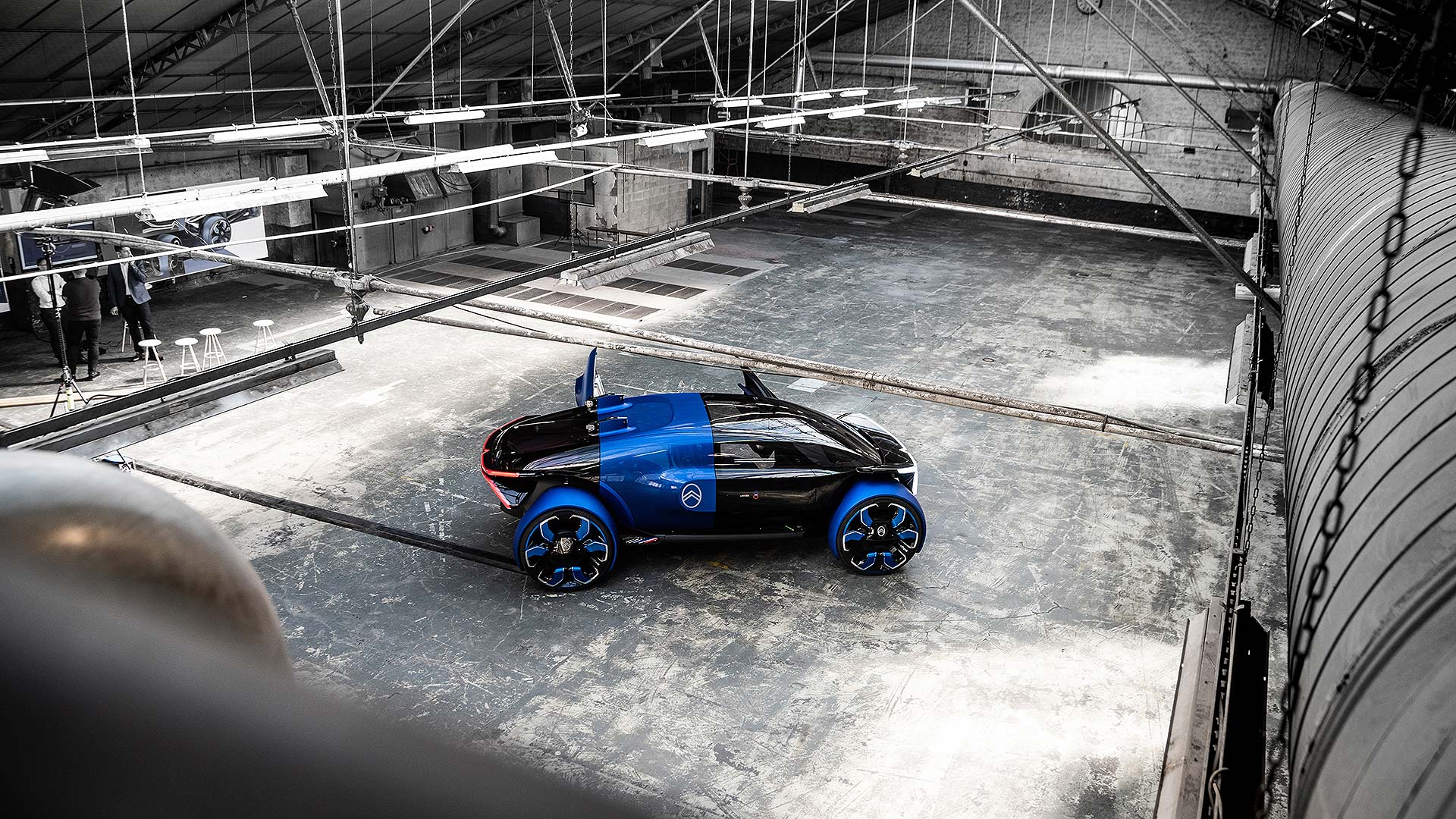 The body of the car appears pod-like, with a rounded fuselage not unlike what you might see at your local airport. That’s very deliberate, as the 19_19’s transparent capsule is ‘inspired by the world of aviation’. No arguments with the claim that this is “a true UFO in the automotive sector” here…

It’s all a bit more nuanced than any old dystopian futuristic notions of ‘mobility pods’. It’s a cleverly designed and considered shape, with the teardrop silhouette incorporating sophisticated aerodynamics and brand identity in equal measure.

The splashes of Rosalie Blue are a very French touch, as are the French flag strakes on the lower sides. The retro Citroen badging is this wacky concept’s link to Citroens of a century ago. 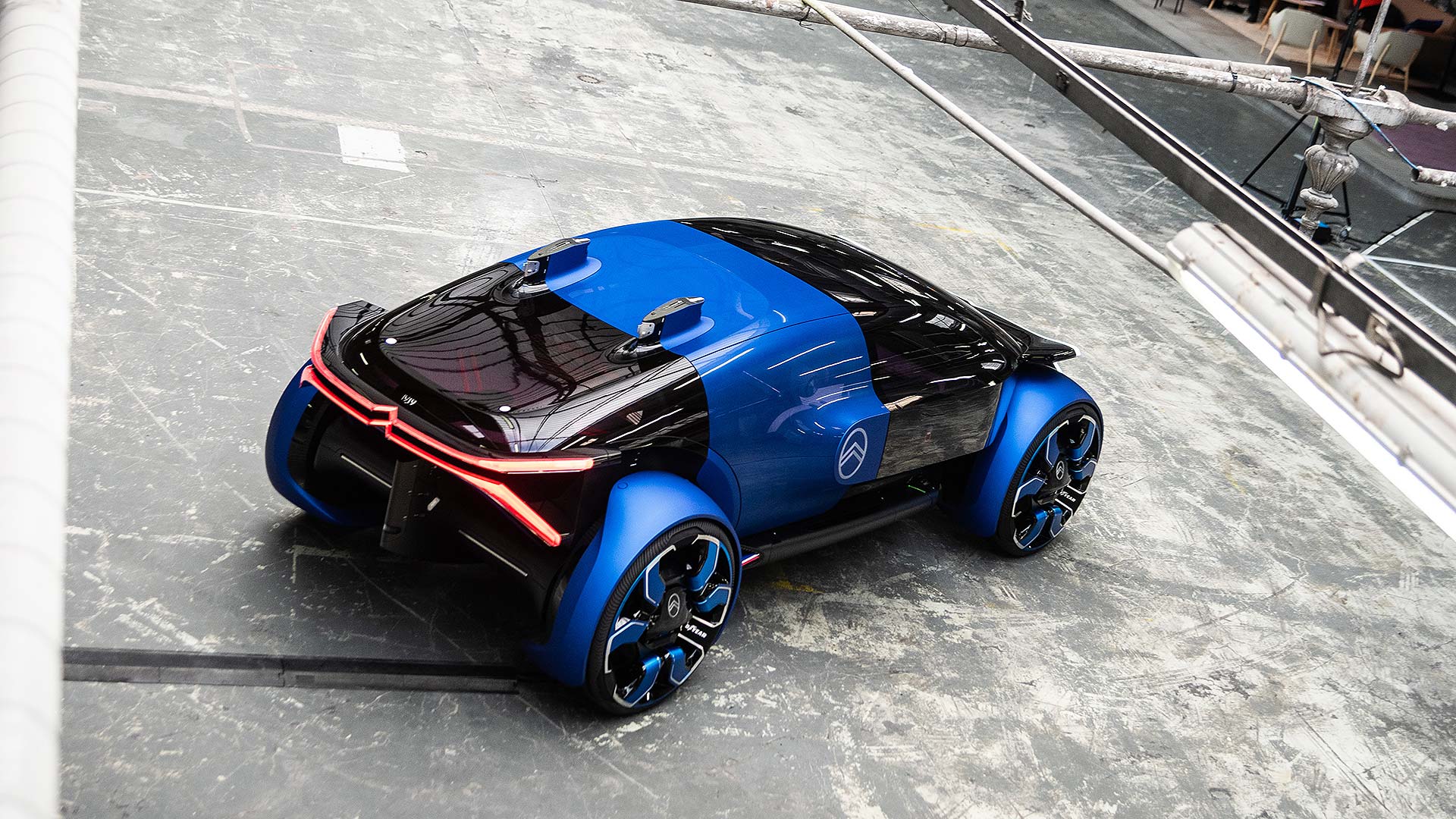 As for linking to Citroens of today, the marque’s badge that travels the width of its current road cars is evident on the 19_19, front and back. The difference? It’s no simple grille motif, but is the lighting structure itself. Looking as out-of-this-world as it does, there’s no mistaking it for anything other than a Citroen.

You might have noticed the solid slab-like piece underneath the cabin. That’s the subframe that houses the batteries as well as the arsenal of sensors the car would use for its various facets of autonomous operation. Being a concept, it’s deliberately designed to look like a skateboard, apparently. 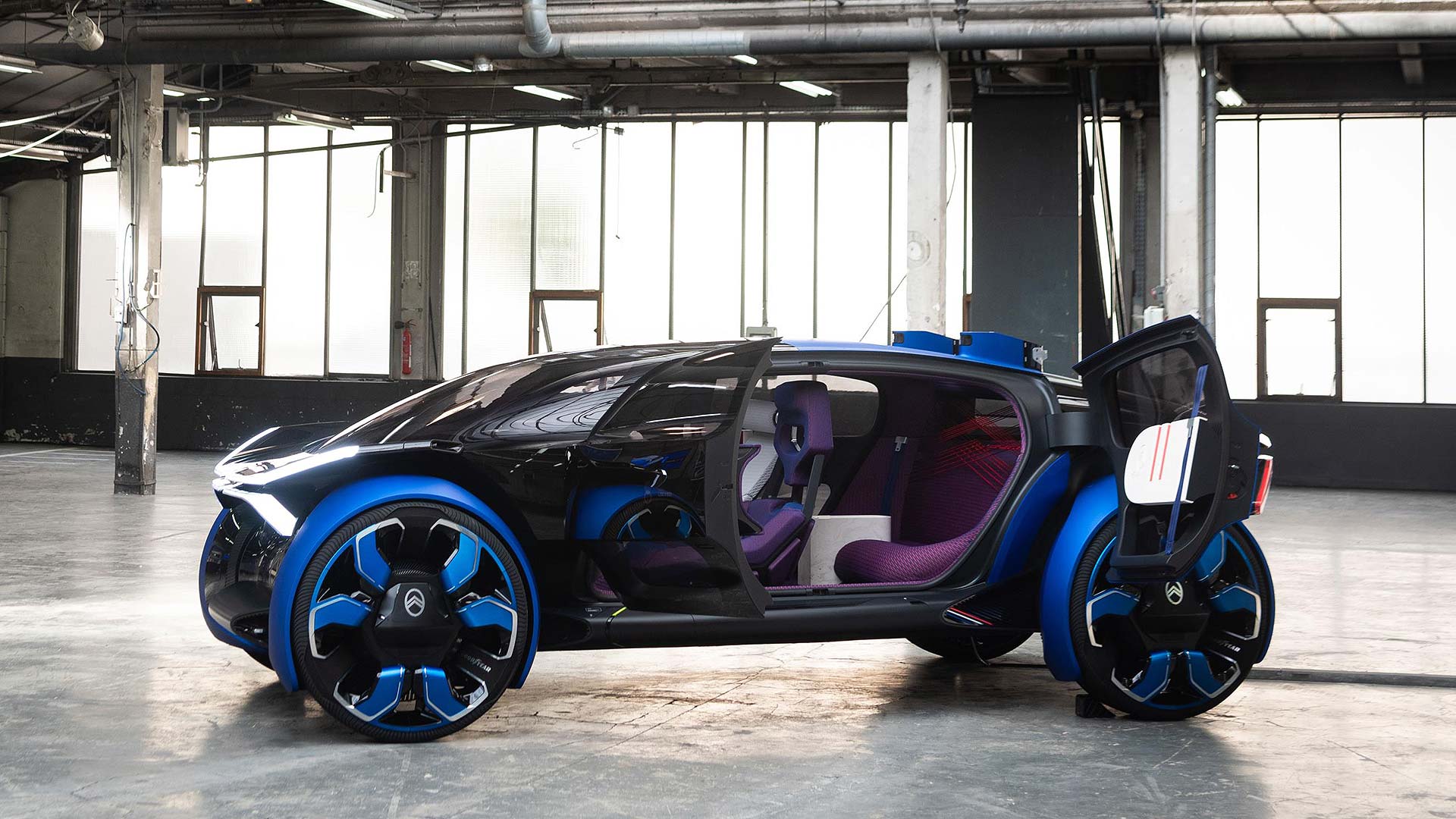 Those massive wheels on the outside, together with the special 30-inch Goodyear rubber, allegedly help the 19_19 in its quest for exceptional comfort. Talk about bucking conventions.

Where the black meets the blue, there’s a screen hidden to ‘greet’ people as they move to open the doors. It can recognise you and interact via animated graphics and messages. 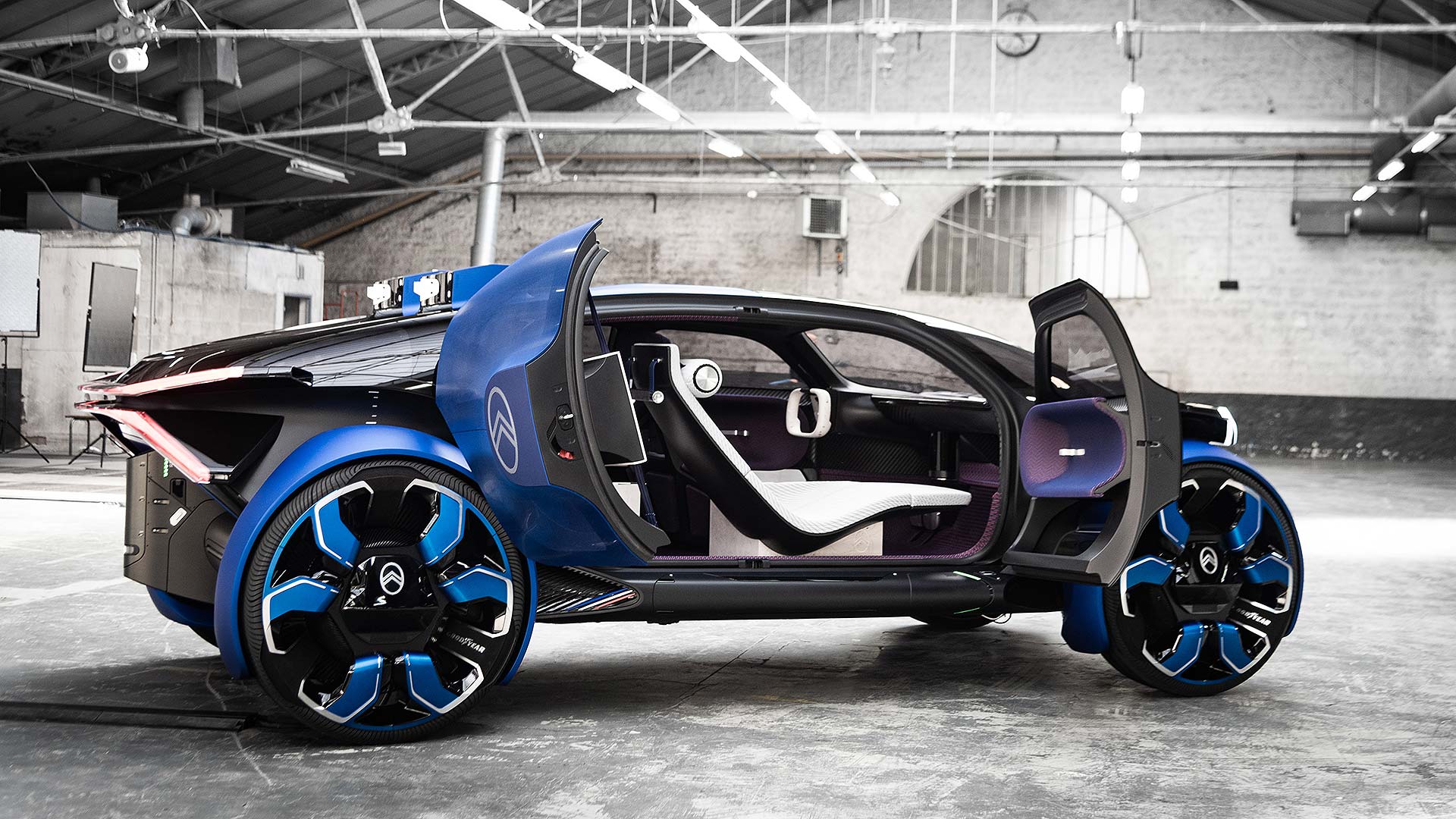 On the inside, your preconceptions of a futuristic cabin needing screens everywhere are utterly dispelled. This “true living room” has fewer televisions than many actual living rooms. In front, everything you need to know as a driver is visible on the head-up augmented reality display via the windscreen.

It features ‘personal assistant’ software, as well as the cylinder that goes through the dashboard. Weird? It gets weirder. It ‘naturally establishes contact with driver and passengers’ and ‘becomes something of a fifth passenger’. Can anyone say Skynet? 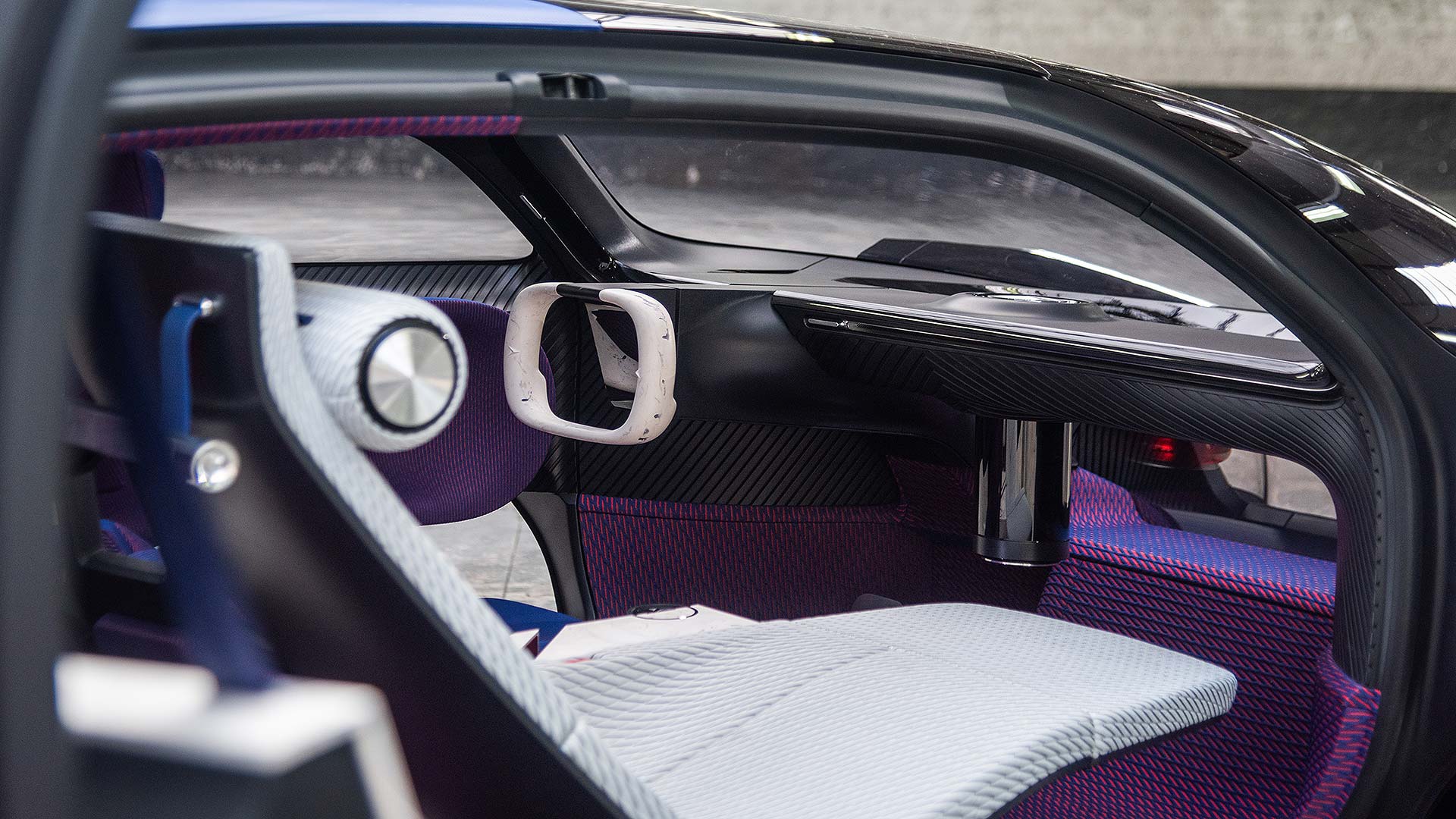 Each seat is supposed to give a different experience for passengers, just as an array of different furnishings might in your home living room. The driver seat is tailored for driving, providing comfort and support in all circumstances.

The passenger seat in the front is reclined a touch, as per the dedication to travel and relaxation. Described as a ‘chaise lounge’, there’s even a motorised foot rest that can come to meet you…

In the back, is where you get the ‘sofa’. The rear seats extend into the boot to form it, like you’d get on a Riva boat. The design in the rear, meanwhile, is upholstered in the same material top-to-bottom, from carpet to ceiling. This, to an end of achieving ‘blanket comfort’. 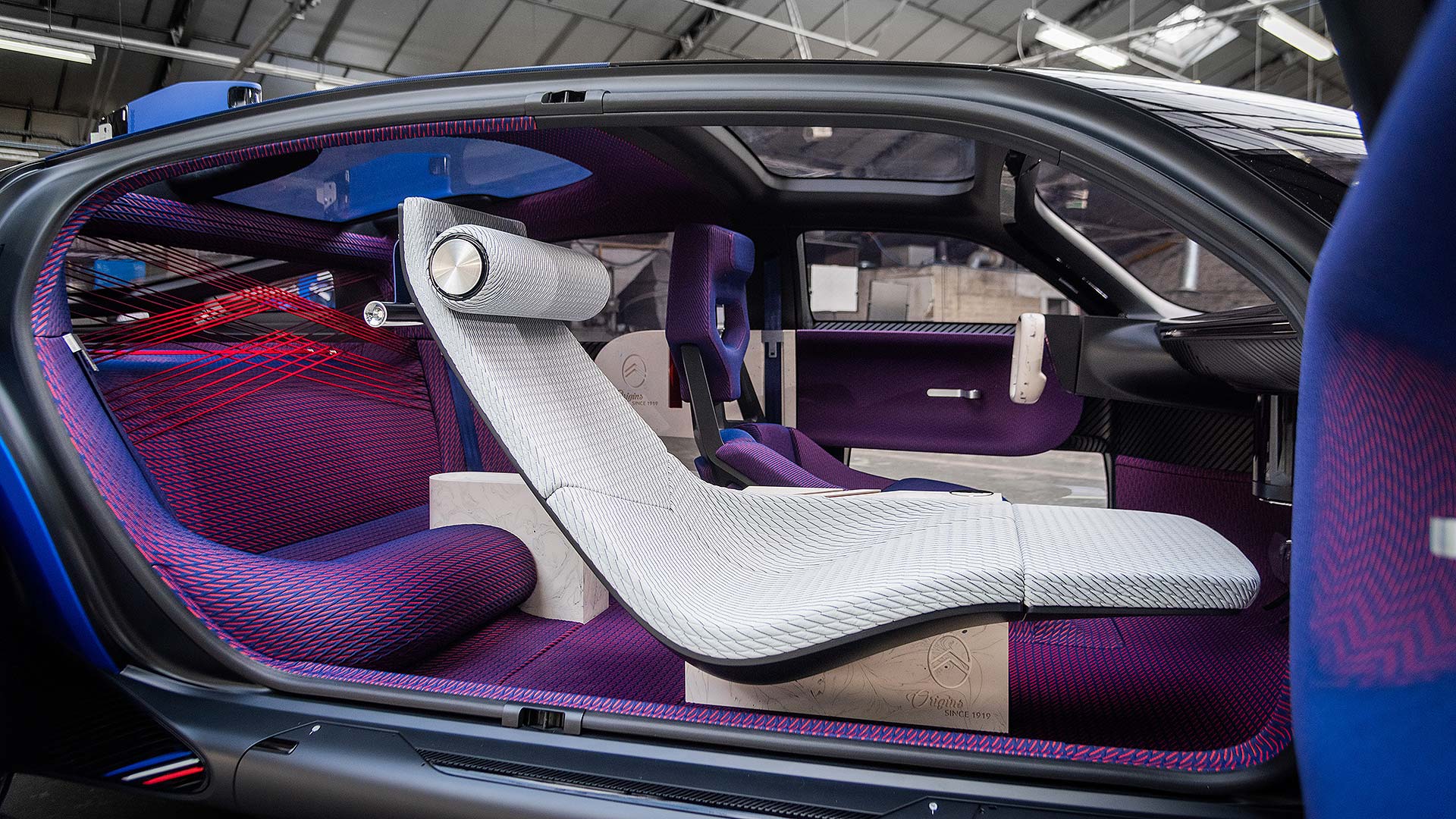 As with the outside with the black and glass meeting the blue, the inside is segregated front to back. Rear-seat passengers can ‘see while not being seen’, with blue micro-perforated trim providing privacy. It all adds up to what Citroen hopes is ‘an extension to the passenger’s home’.

It can’t be without too many nods to current trends, of course. Being quite a tall thing, the 19_19 boasts the commanding viewpoint of a contemporary SUV.

Powering the Citroen of the future 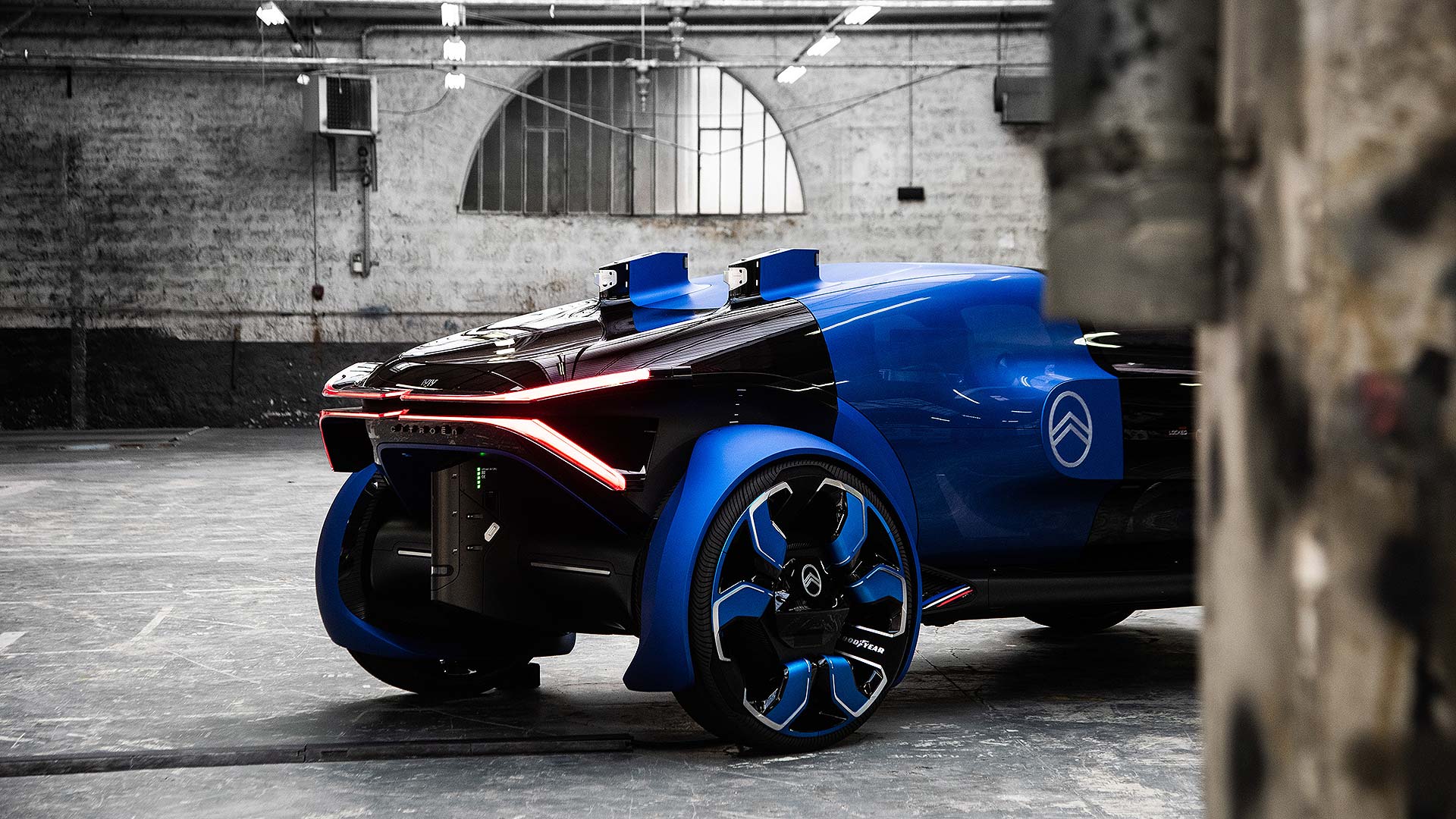 It’s all well and good flexing your not-too-distant future design and ‘manifesto’, but does it move? According to Citroen, yes, under electric power No surprises there.

As for the hardware specs, the 19_19 makes use of two electric motors – one for each axle – and four wheel drive. Powering the motors is 100 kWh of battery power, making the 19_19 good for just under 500 miles of driving range.

Impressively, the batteries can be recharged to a 372-mile (75 percent) charge in 20 minutes. The 19_19 also features an inductive wireless charging system which, on the right road, could charge it on the move. That really is forward-looking. 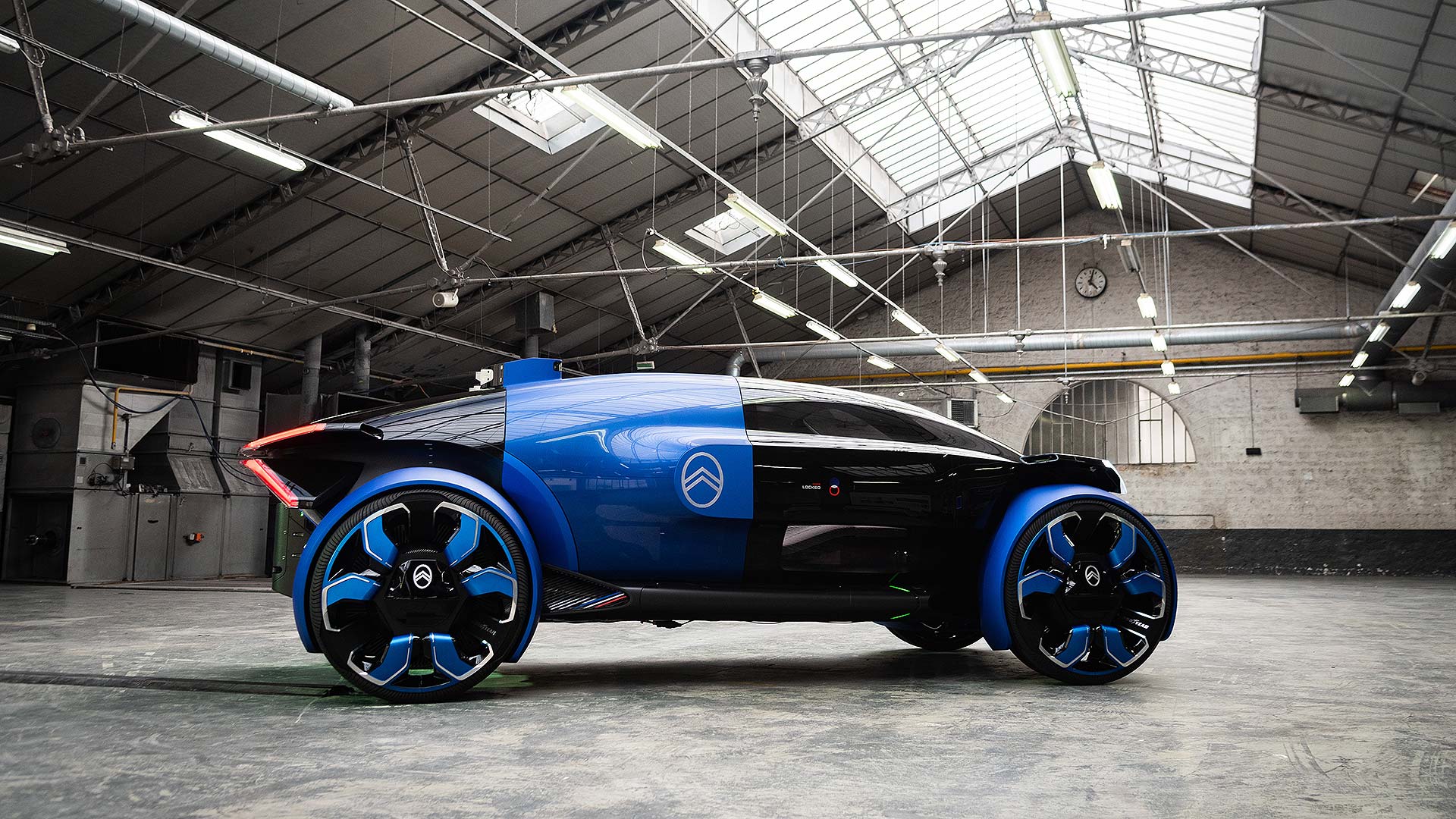 Needless to say, the Citroen 19_19 Concept is autonomous. Unlike some concepts, it isn’t bypassing the driver entirely (which we find encouraging), but the sheer configurability of the interior has been designed with self-driving travels in mind.

Whether we’ll ever see a production-spec Citroen 19_19 take to the roads remains to be seen. But you can bet that some of the many features it previews will be coming to the 100-year-old French firm’s range sooner or later.

As a signal of what the next 100 years has in store, this deliberately unconventional disrupter is very promising indeed: see it make its public debut from 16 May at the VivaTech show in Paris. 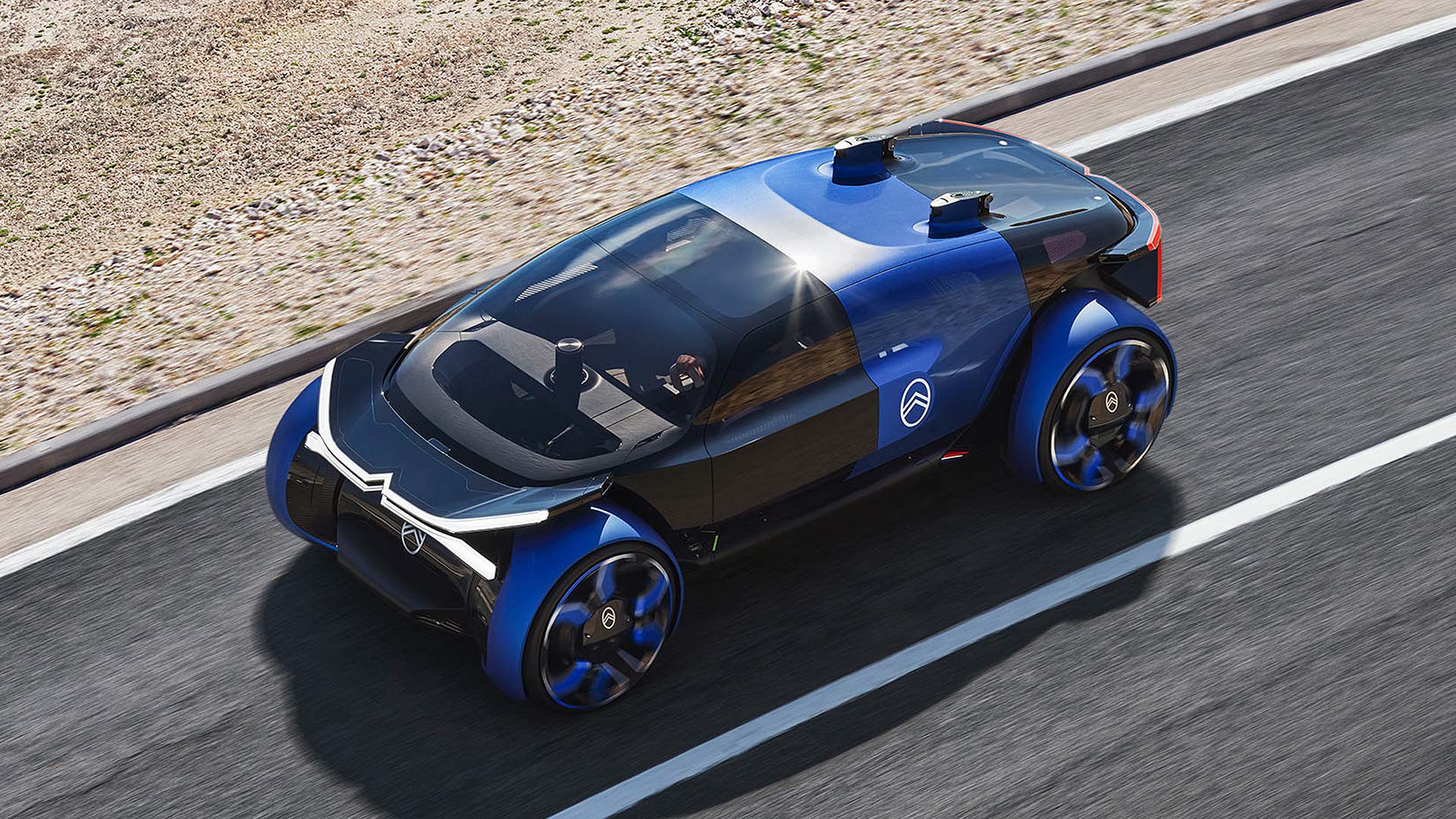