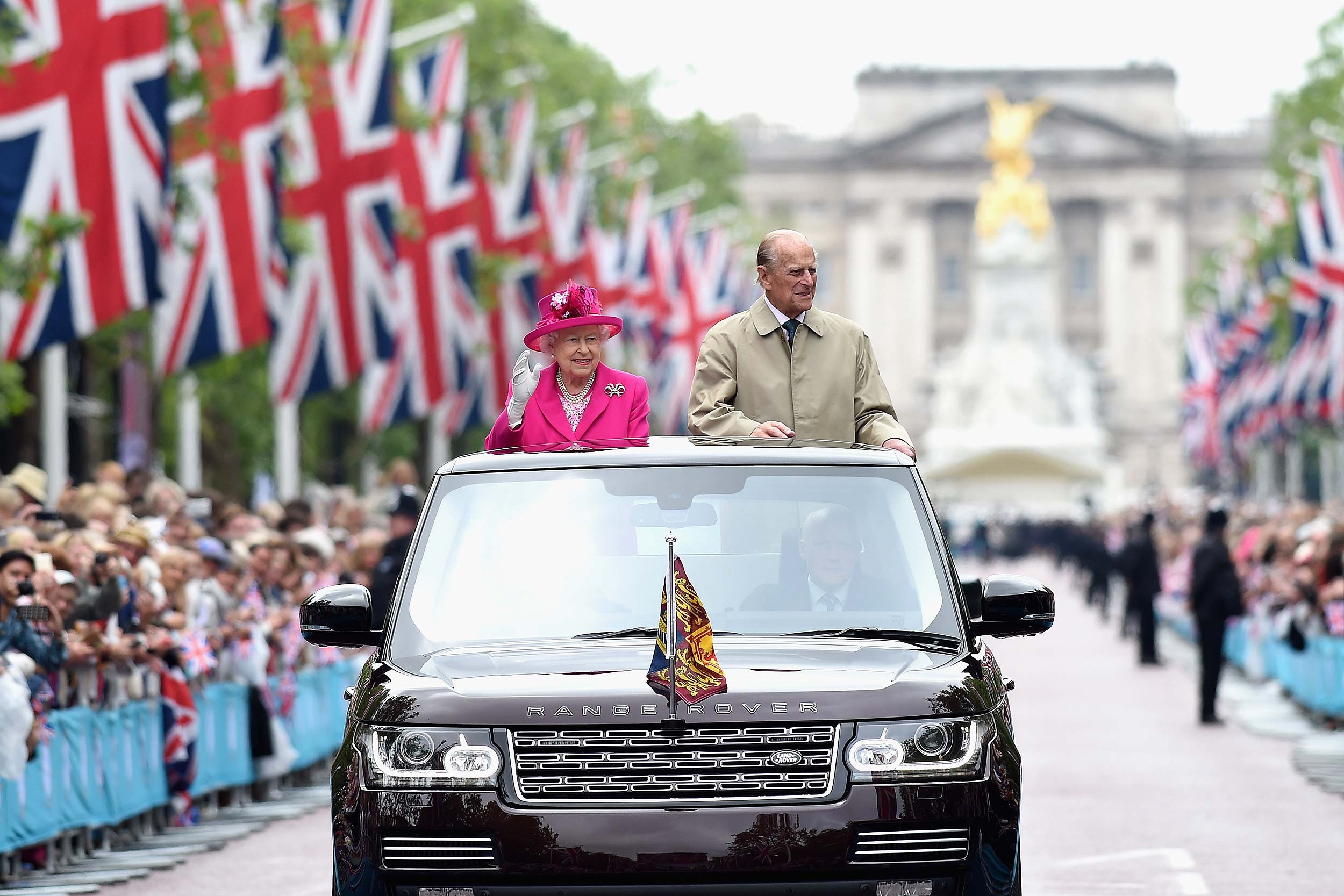 The Duke of Edinburgh Prince Philip has been involved in a high-profile car crash near the Queen’s royal residence at Sandringham, Norfolk. The 97-year-old Duke is reportedly shaken but uninjured after the nasty-looking incident involving his Land Rover Freelander.

You could own Prince Philip’s Range Rover

The fact the royal fleet still has an elderly Freelander 2 on the roster has surprised some. However, this is not the only eyebrow-raising car owned by the royal family over the years. Here, we look back at some of the most noteworthy royal rides – and riders… 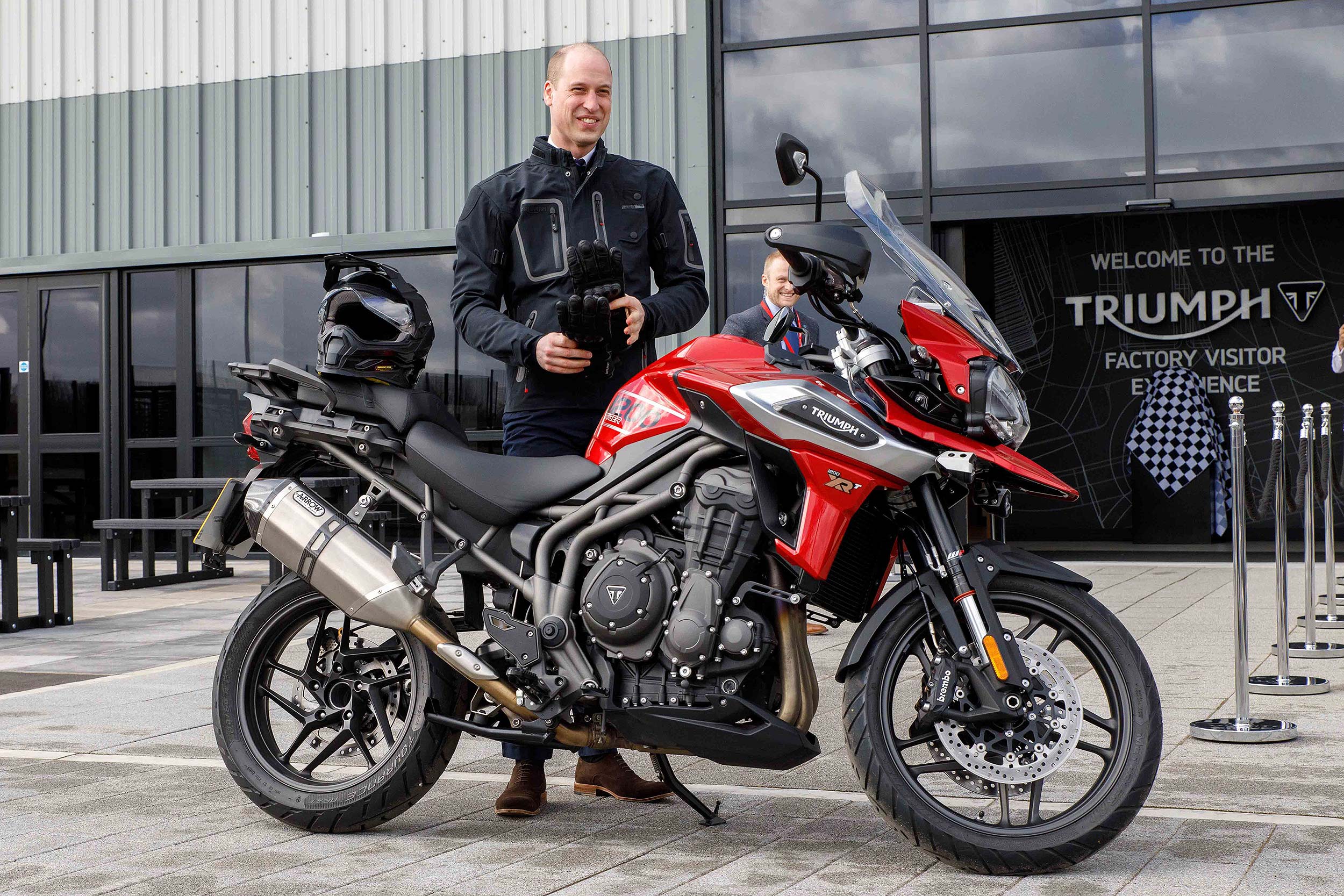 With three children keeping him and the Duchess of Cambridge busy, Prince William might have put two-wheeled antics on hold for a while, but he couldn’t resist a quick ride on a new Tiger 1200 during a visit to the Triumph factory in February. Last year, Prince William discussed his love of motorcycles with Jonathan Rea as he presented the triple World Superbike champion with an MBE at Buckingham Palace.

“We talked about his bikes and the fact that he has put it on the back-burner a little bit because of his children now,” said Rea. William has been a fan of motorcycling since a young age, when he practised on a Kawasaki on his father’s Highgrove Estate. But as the Duke Cambridge swaps two wheels for ISOfix and baby wipes, we take a look at the cars of the British Royal family. 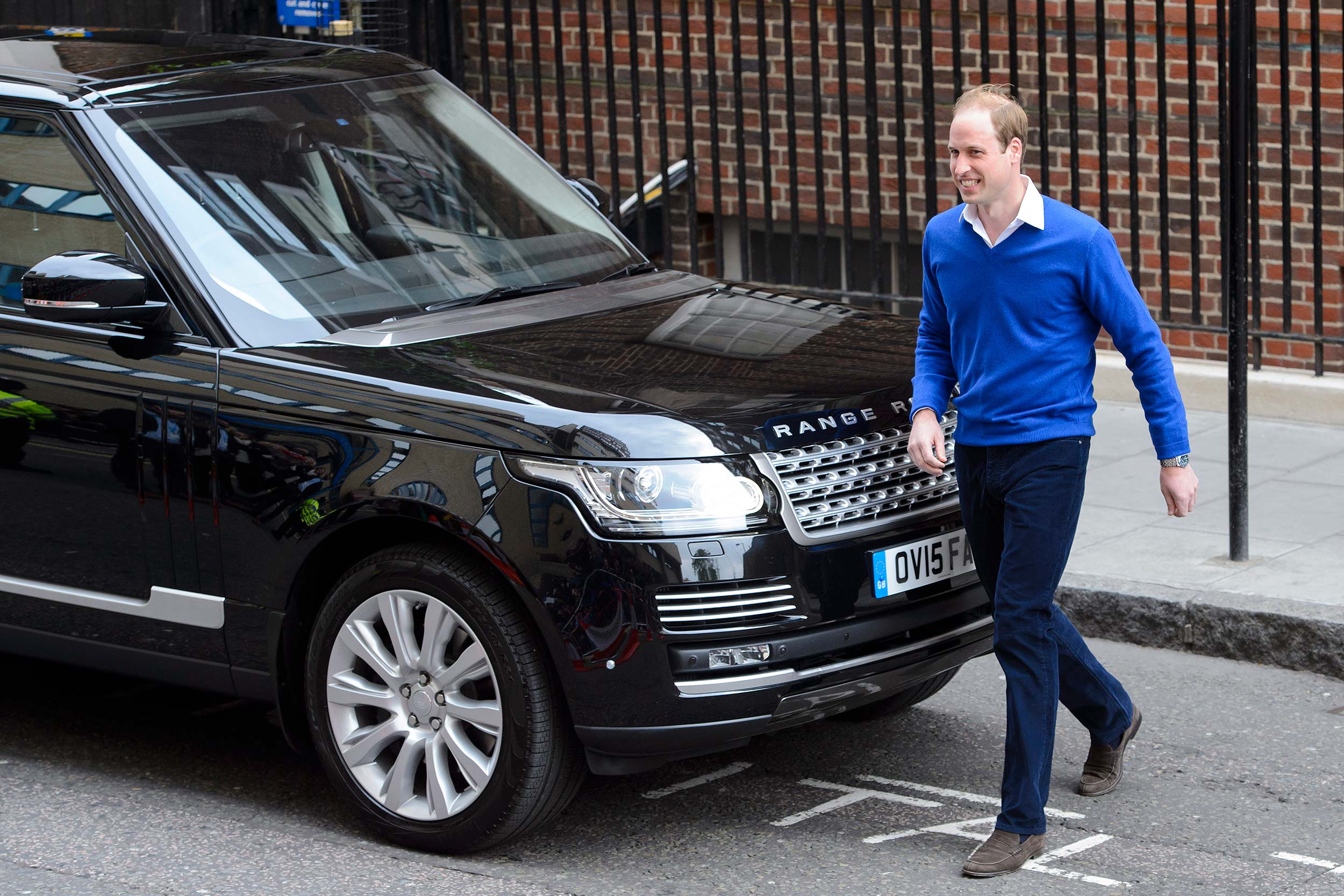 The Range Rover appears to be the vehicle of choice for the Duke and Duchess of Cambridge. In 2013, Prince George was driven home from London’s St Mary’s Hospital in a top-of-the-range Range Rover Vogue SE gifted to the royal couple by Land Rover’s VIP department. Here’s Prince William with the family Range Rover SDV8 Autobiography following the birth of Princess Charlotte in 2015. 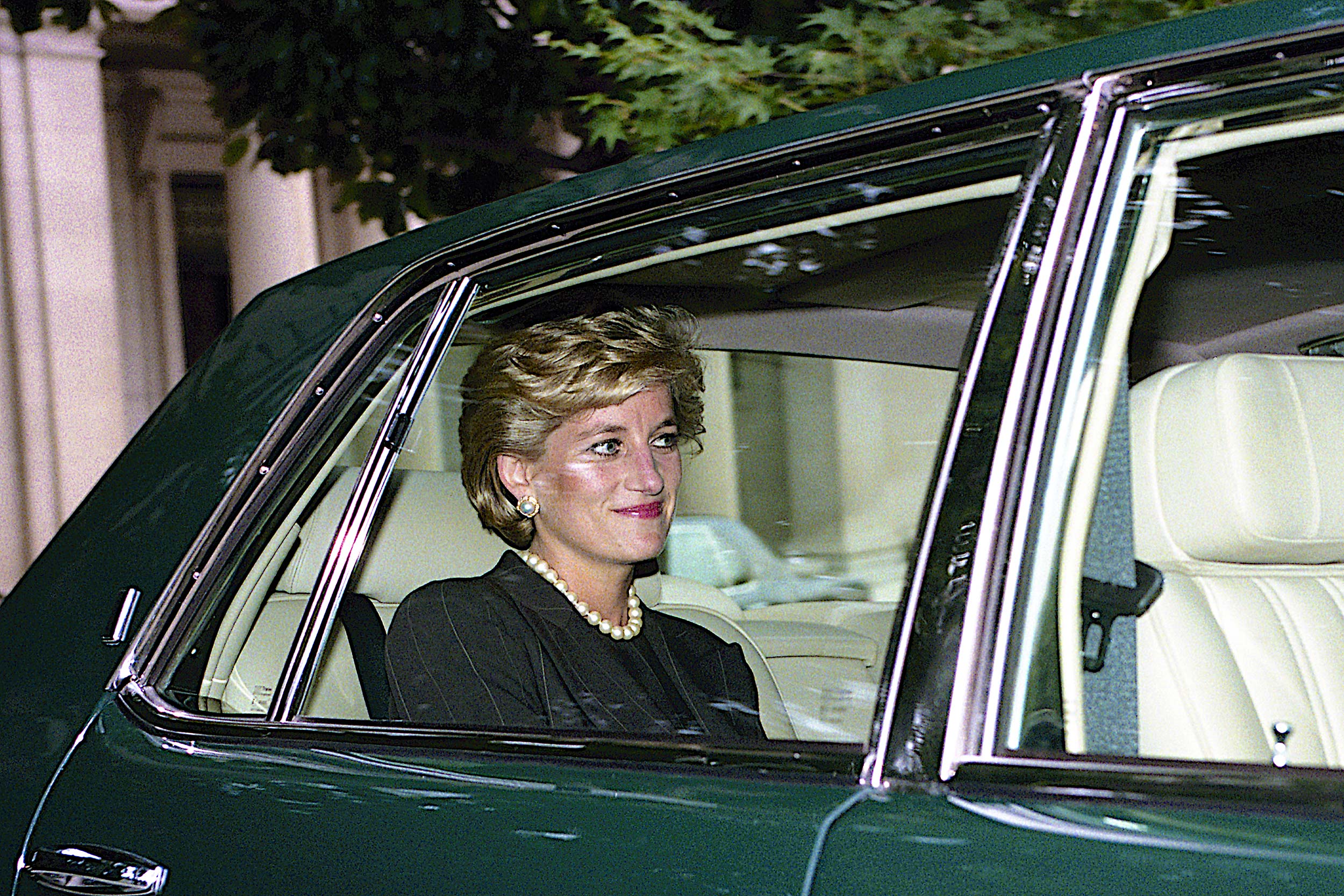 Here we see Princess Diana and the British Ambassador to the US, Sir John Kerr of Kinlochard, as they ride in the back of a Rolls-Royce Silver Spur en route to the White House. The Balmoral Green Silver Spur was commissioned by the British Foreign Office to be used as part of the British Embassy vehicle pool in Washington DC. 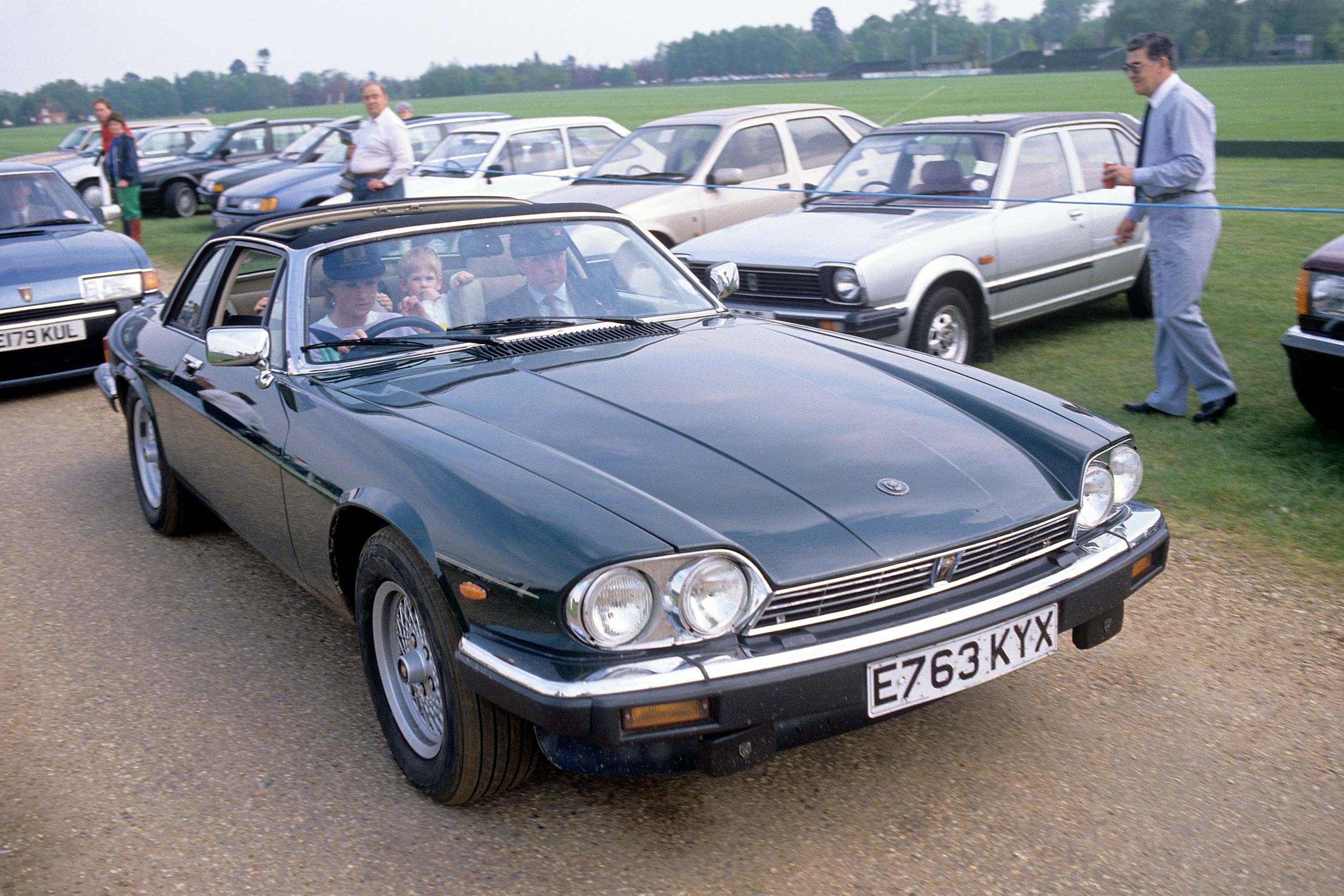 In response to demand for a soft-top version of the XJ-S, Jaguar launched the XJ-SC in 1983. Princess Diana used this 1987 car from 1987 to 1991, when it was acquired by the Jaguar Daimler Heritage Trust in return for a contribution to her charity. While other XJ-SCs were two-seaters, Diana’s Jag was fitted with two rear seats to allow the young Princes William and Harry to travel with their mother and her bodyguard. The V12-powered Jag also features an individually made, and permanently fixed, rear hardtop to ensure that the two princes could not strike their heads on the solid targa roof bar in an accident.

Before Diana, the Royal Family drove British cars. It was the done thing. But all that changed in 1991 when Diana leased a Mercedes-Benz 500 SL to replace the XJ-SC. She had a thing for topless Germans, as she went on to drive not one but three Audi 80 cabriolets. As Jeremy Clarkson said at the time: “She alone has turned what might have been just another nice car into by far and away the coolest and most sought-after-four-wheeled status symbol of them all.” 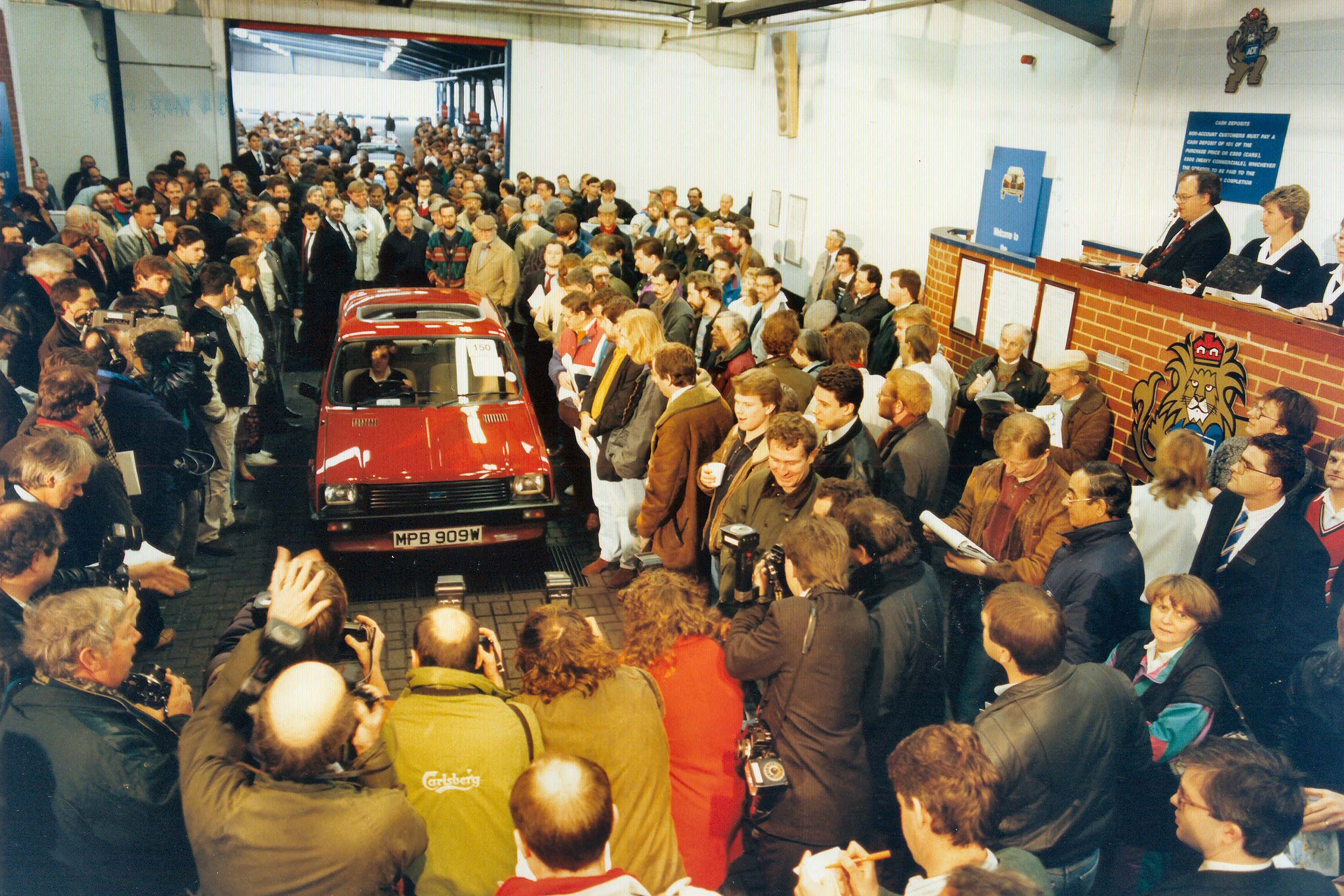 Not everybody in this auction room was there to bid on this seemingly anonymous Austin Mini Metro L. Look again and you’ll notice that many people surrounding the 1980s city car are armed with a camera. It was Princess Diana’s first car, driven by a 19 year old Lady Diana Spencer at the time when she was first linked with Prince Charles. It sold for for around £6,000 ($8,500), which is about five times what would be expected for a Metro at the time. It now lives in the Coventry Transport Museum. 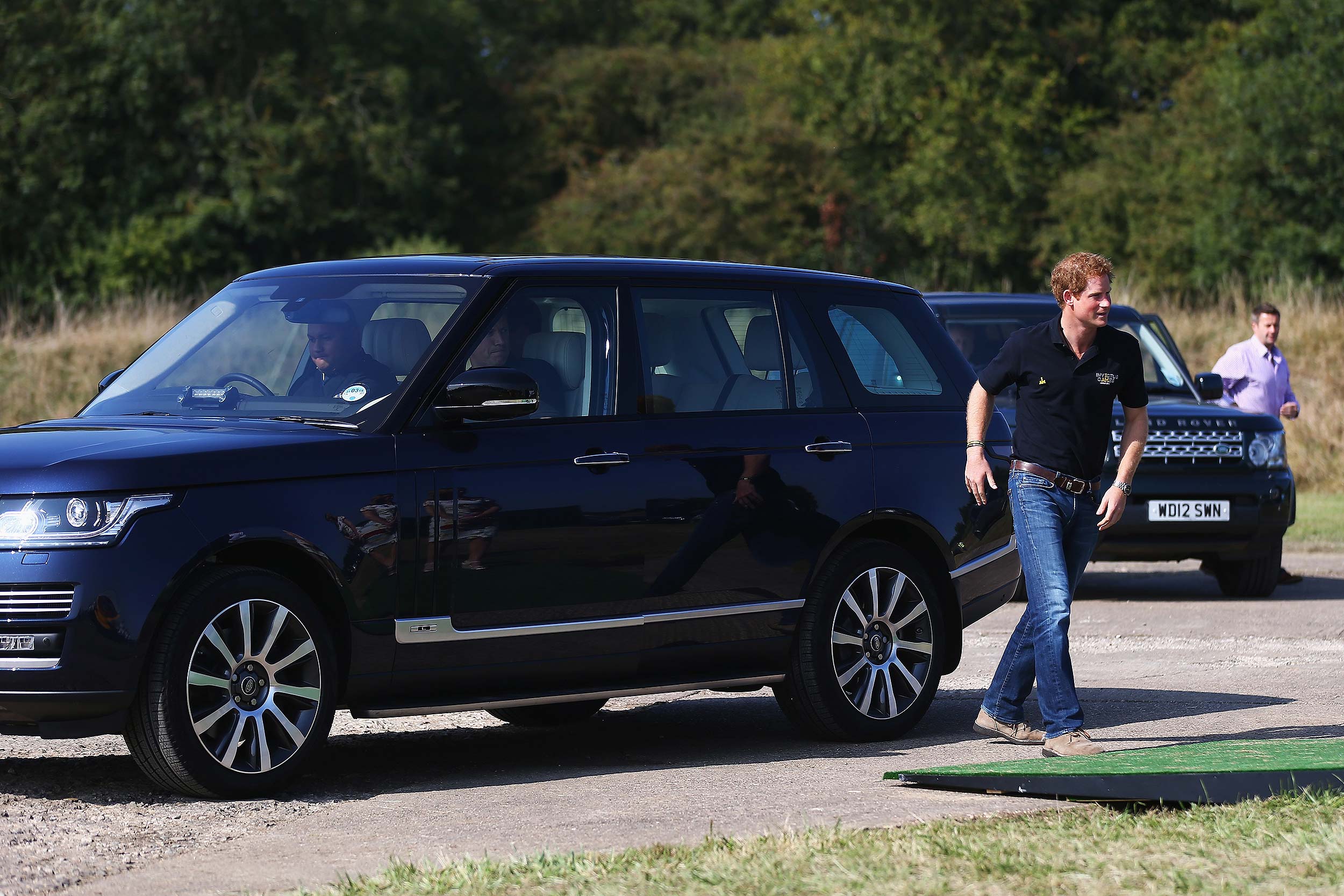 Ahead of the opening ceremony of the 2014 Invictus Games, Prince Harry arrived in Warwickshire to watch teams from 11 nations compete in the Jaguar Land Rover Driving Day. Fittingly, Harry turned up in a Range Rover. 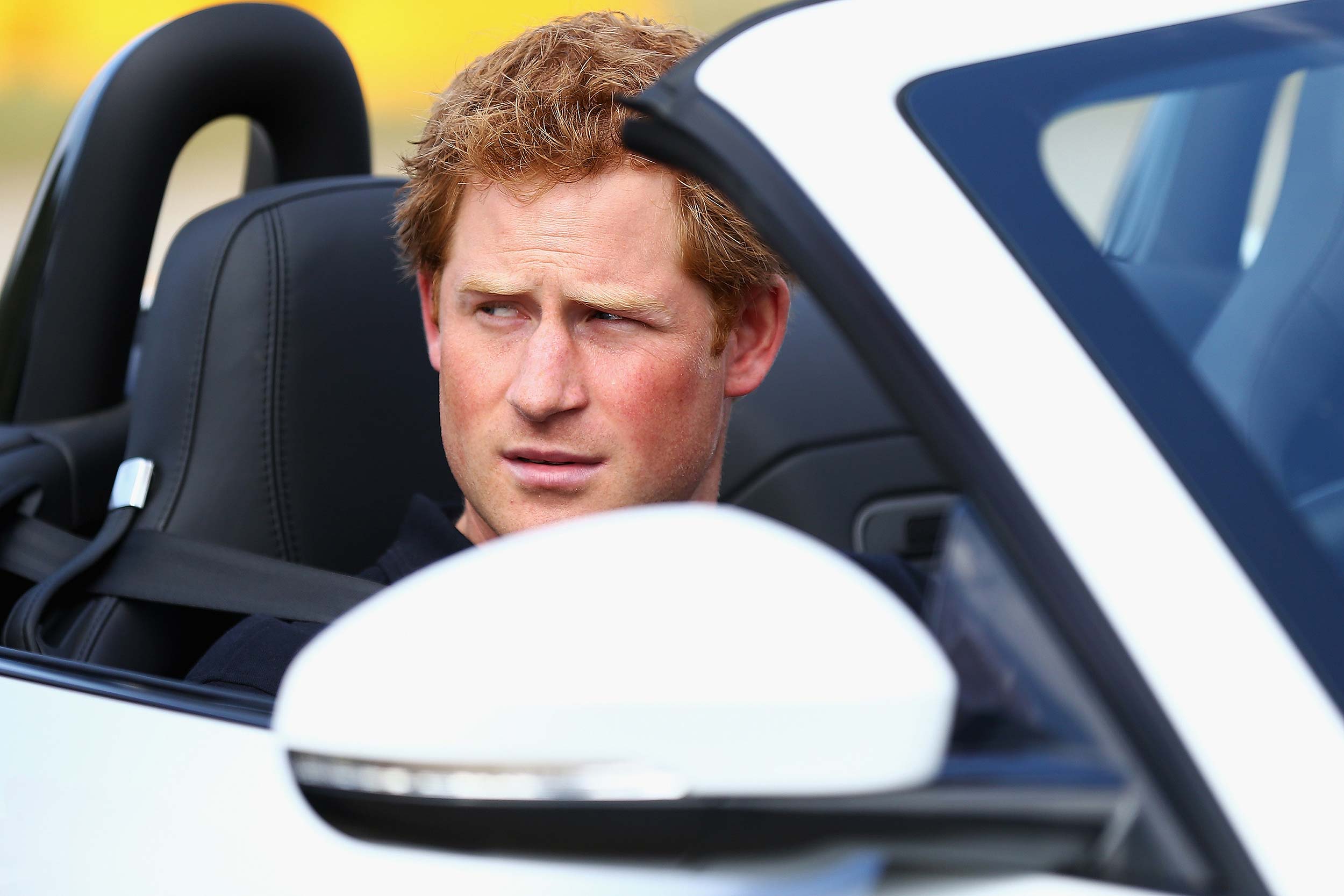 And, here’s Prince Harry at the wheel of a Jaguar F-Type. The photo was taken just days before his 30th birthday and he admitted that he was “slowly starting to feel old.” He went on to say that “30 is one of those first milestones when you drive through a village and you see the 30mph signs, it’s that constant reminder going, ‘I am actually quite old,’” he said. 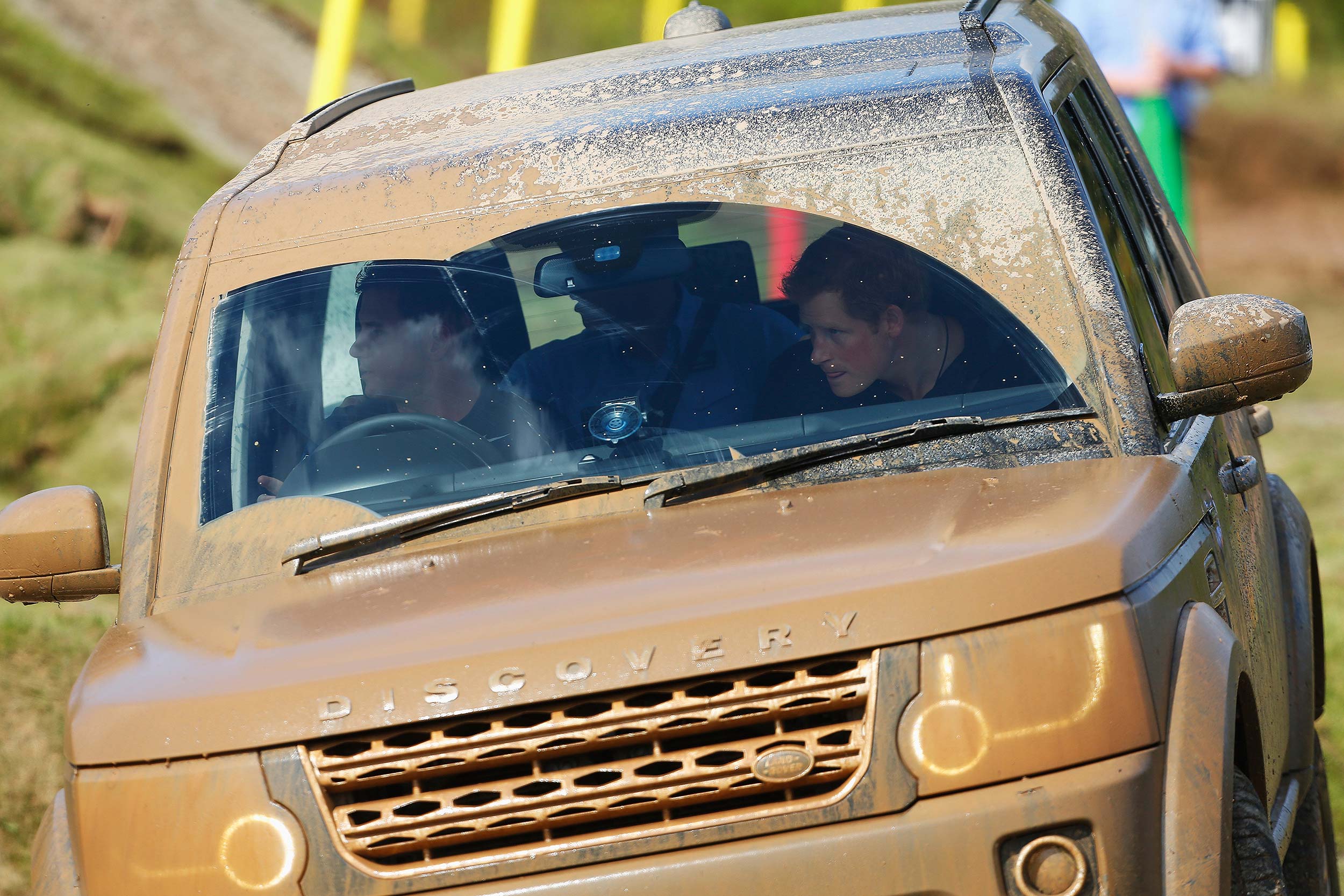 This is Prince Harry getting down and dirty in a Land Rover Discovery at an off-road event, but he’s no stranger to the Disco. He and then-fiancée Meghan Markle arrived at Buckingham Palace for the Queen’s Christmas lunch in a much cleaner Discovery. 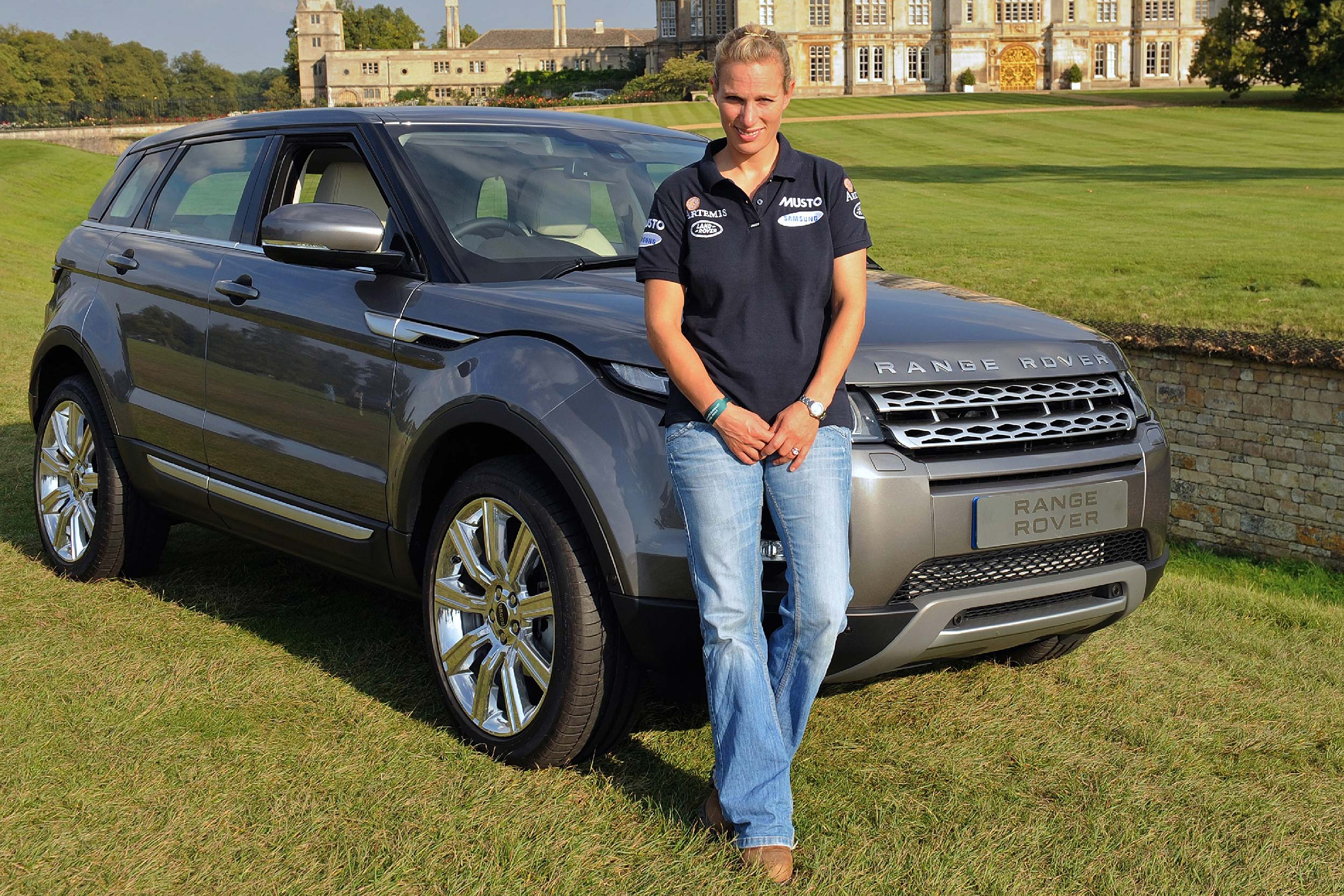 Land Rover Ambassador Zara Tindall was the first person to take delivery of a Range Rover Evoque, having placed an order a year earlier. In 2011, Zara Tindall (née Phillips) said: “I think it looks really cool. It’s really exciting, you know, totally different to what they’ve got at the moment, and I’m excited to drive it. Land Rover are really excited about it as well. Hopefully it will be a popular car for them.” Which is nice. 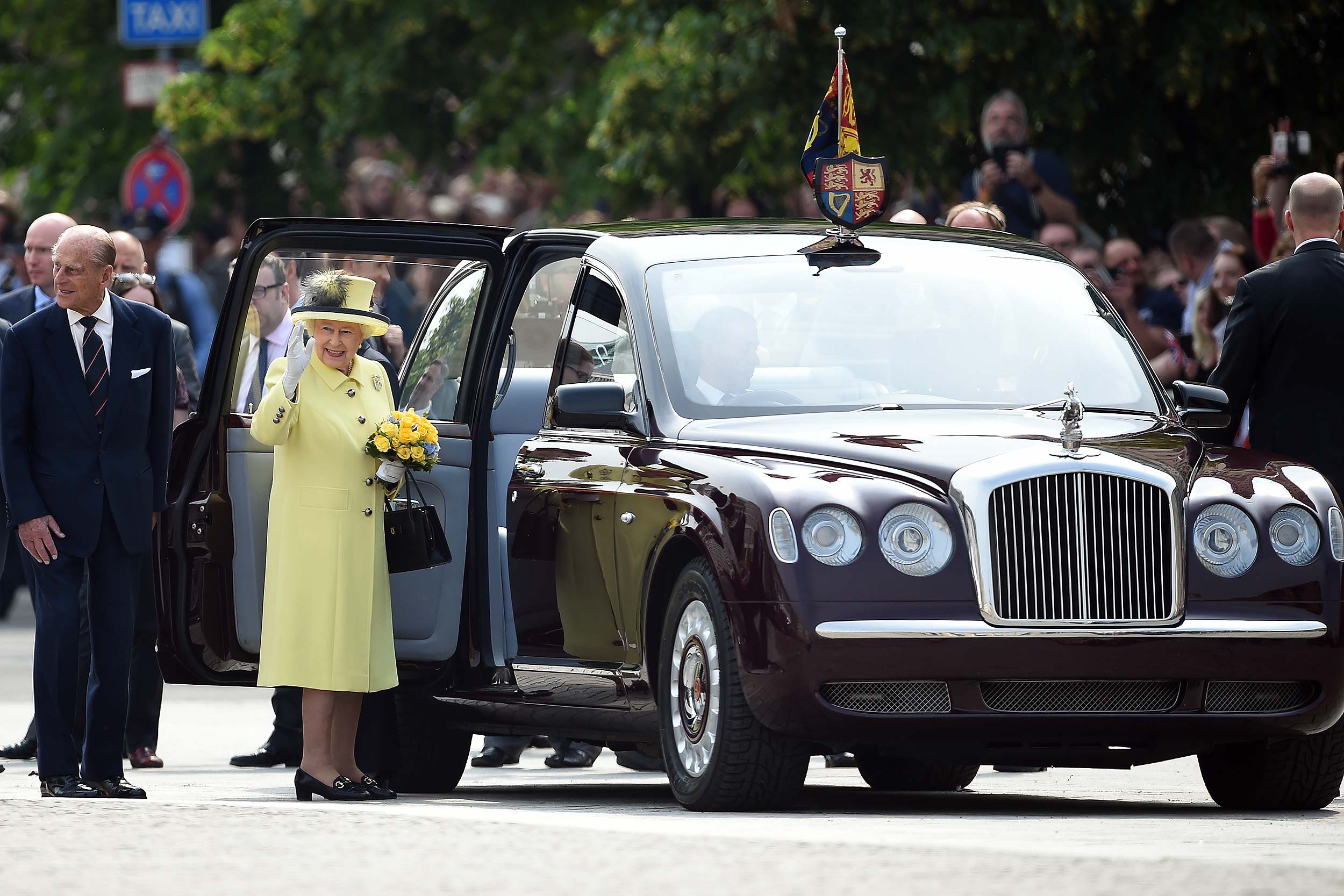 This unique Bentley State Limousine was presented to the Queen in 2002 to mark the 50th anniversary of her succession to the throne. Though based on the Bentley Arnage, the company went to great lengths to ensure this was as bespoke as possible. It’s powered by a modified version of the 6.75-liter V8 from the Arnage R, developing 400hp and 616lb-ft of torque. 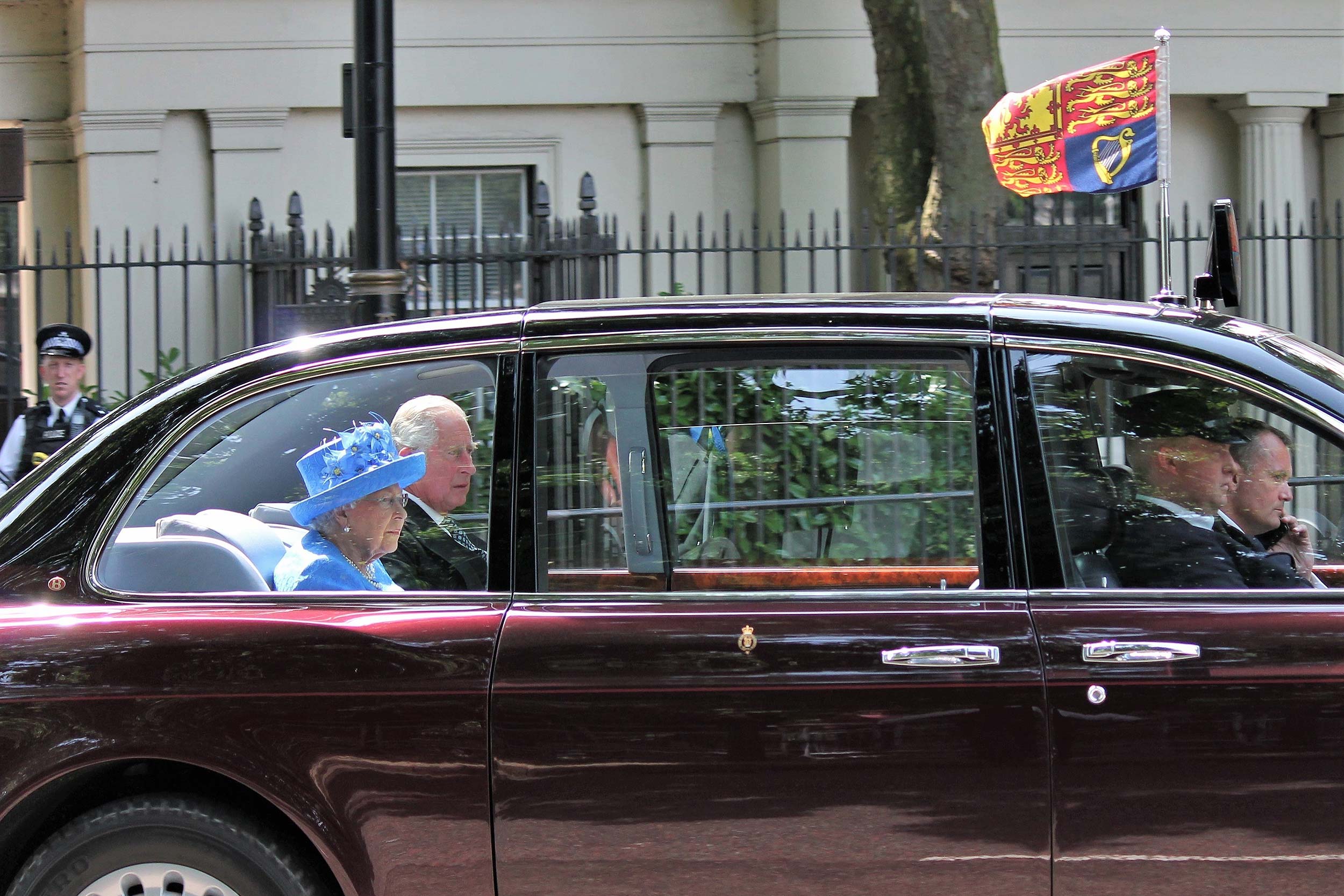 An extended wheelbase provides more room for passengers in the rear, while a wider body and raised roof ensures Her Majesty travels about in absolute comfort. Bentley and Mulliner even modelled the rear seat position on a person the same height as the Queen. 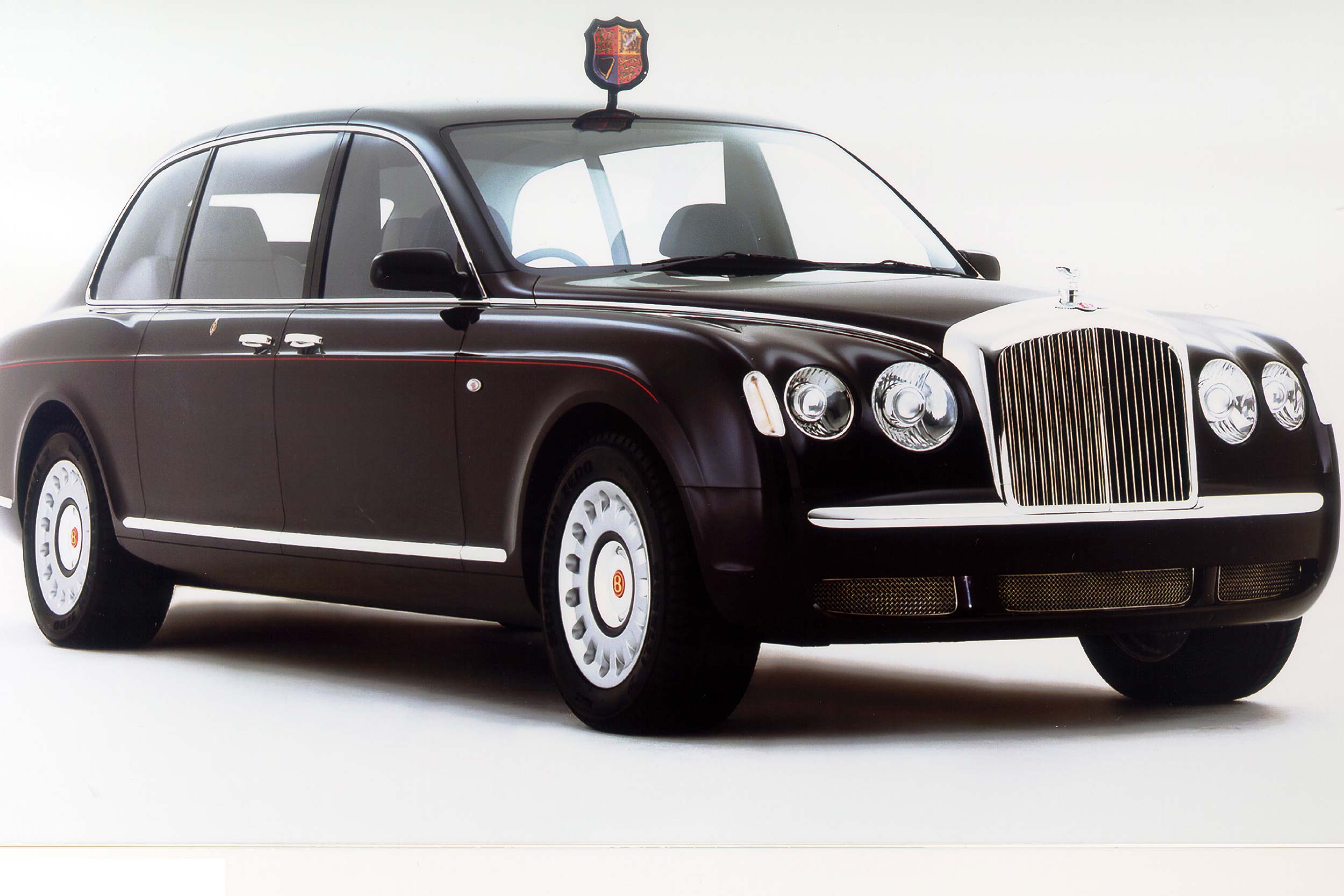 By creating a ‘panoramic glasshouse’, Bentley ensured wellwishers could get the best view of the Queen during royal engagements. Interestingly, when the Queen is on board, the Bentley ‘Flying B’ hood ornament is replaced by either Her Majesty’s St George slaying a dragon or a single lion. You don’t get this kind of option on a Fiesta… 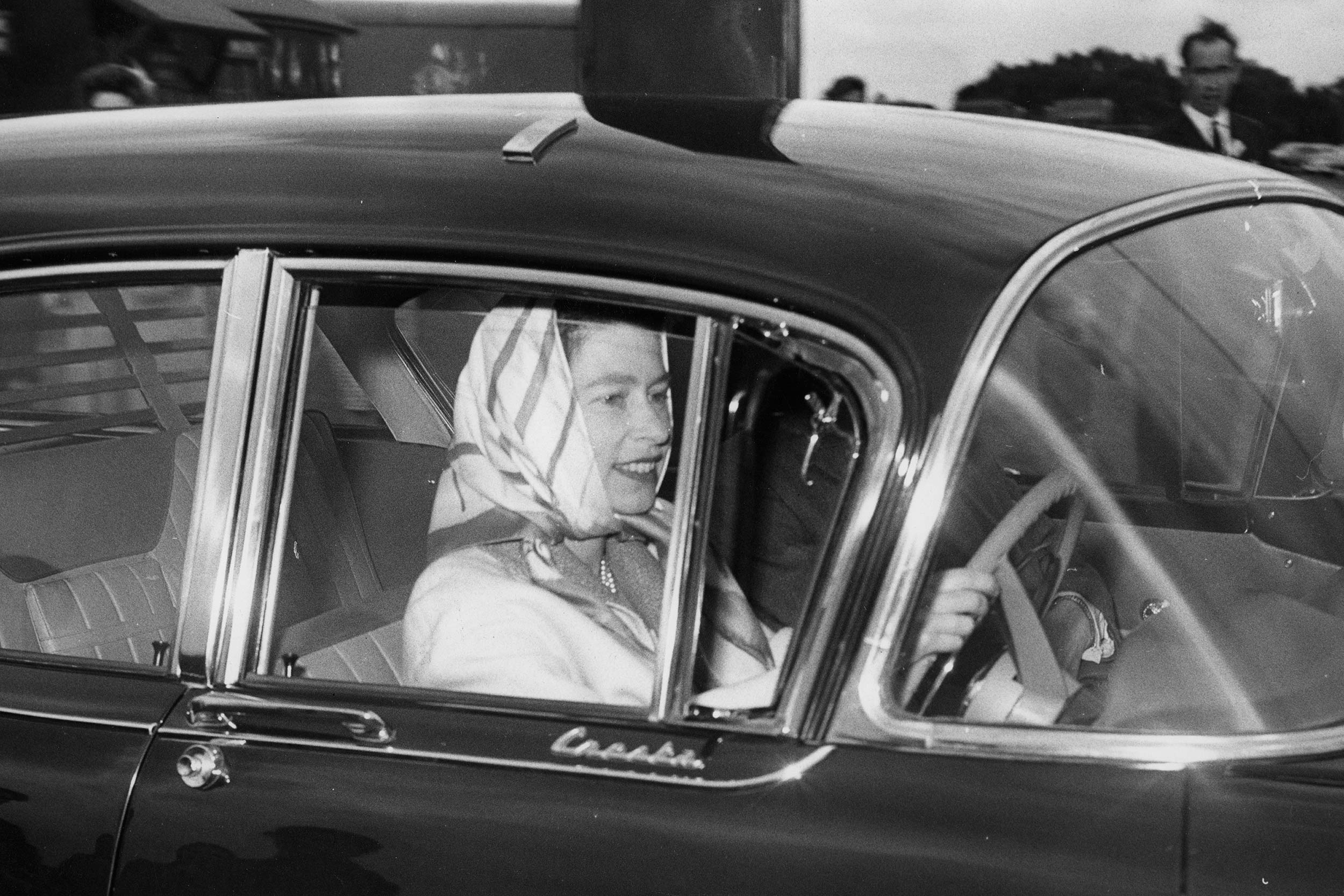 Be honest, you weren’t expecting a Vauxhall to appear on a list of cars owned or driven by the Queen, were you? This is like the President turning up at a charity ball in a Vauxhall Astra Country Tourer. But this is no ordinary Vauxhall. In fact, it’s rumoured to be one of Her Majesty’s favorite vehicles. 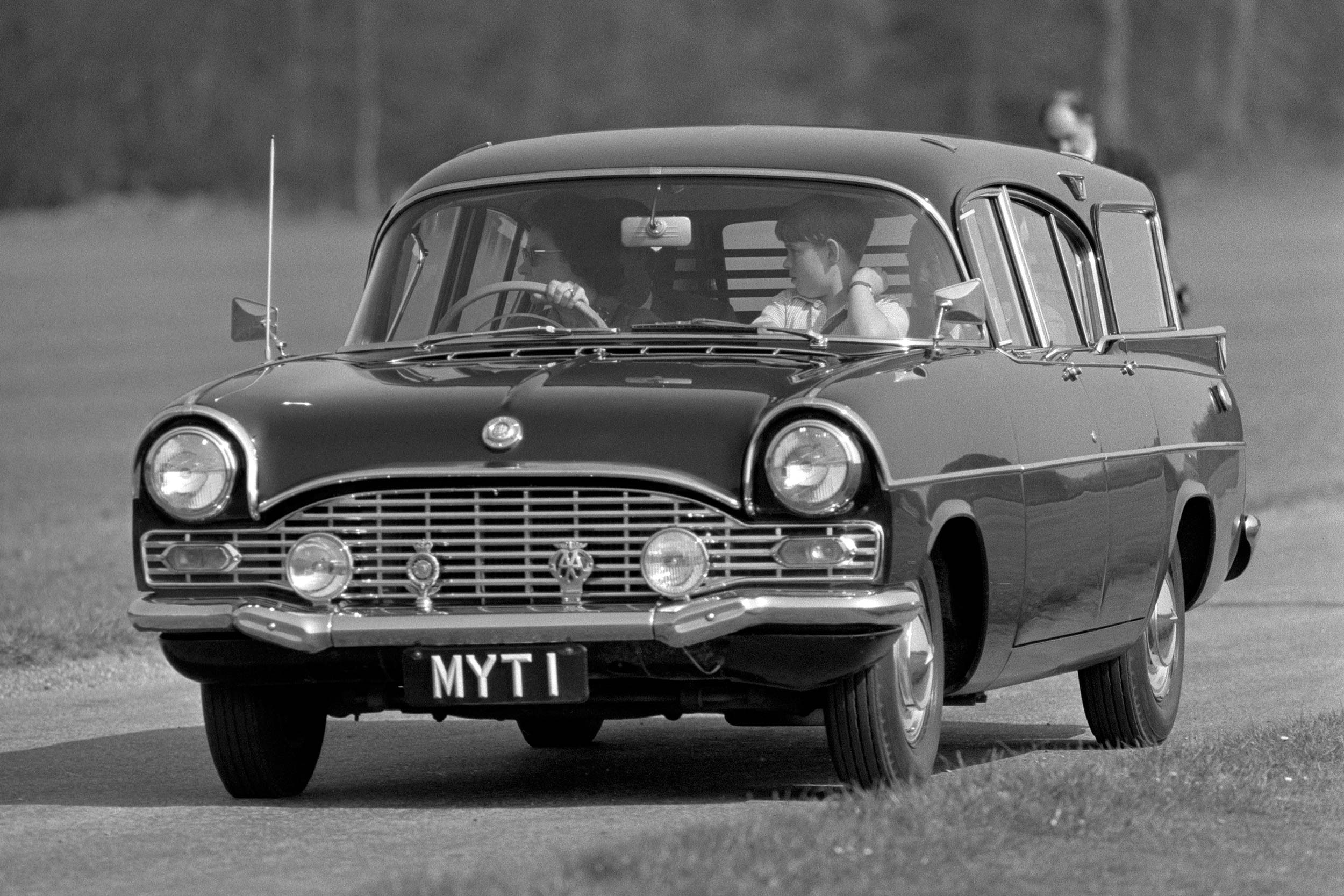 The Insignia Sports Tourer is ready for active lifestyles, reckons Vauxhall, but aluminum roof rails wouldn’t be enough for Her Majesty. Her Cresta featured fishing rod holders built into the roof, along with a dog guard to stop her beloved corgis from entering the passenger compartment. There’s also a gun rack. 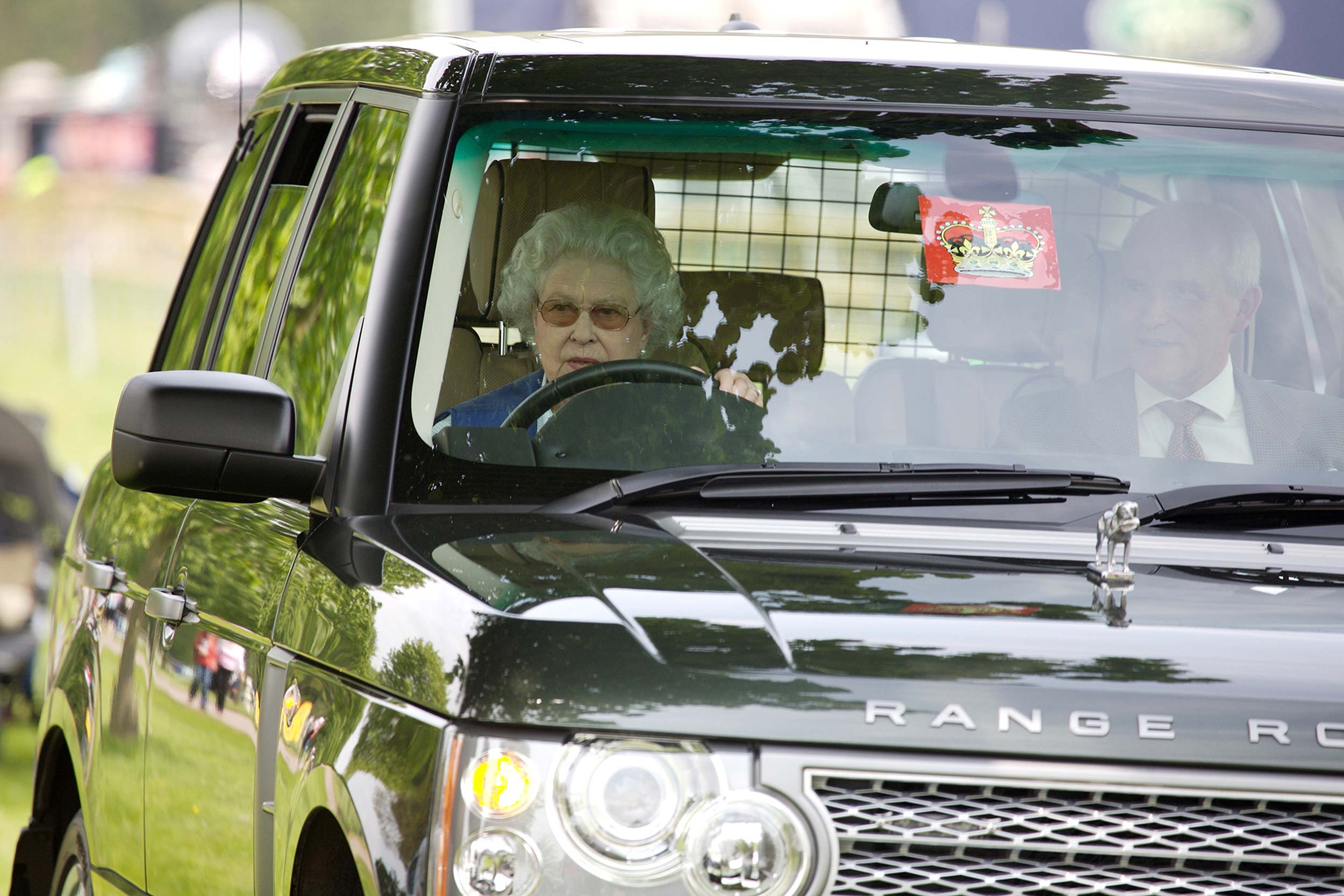 The Queen is a huge Land Rover fan and there are many photographs of Her Majesty driving one of the off-roaders at Sandringham or Balmoral. Plenty of room for her children, Charles, Anne, Andrew and Edward, while allowing space for the dogs. Here’s the Queen at the wheel of a Range Rover, complete with hood mascot. 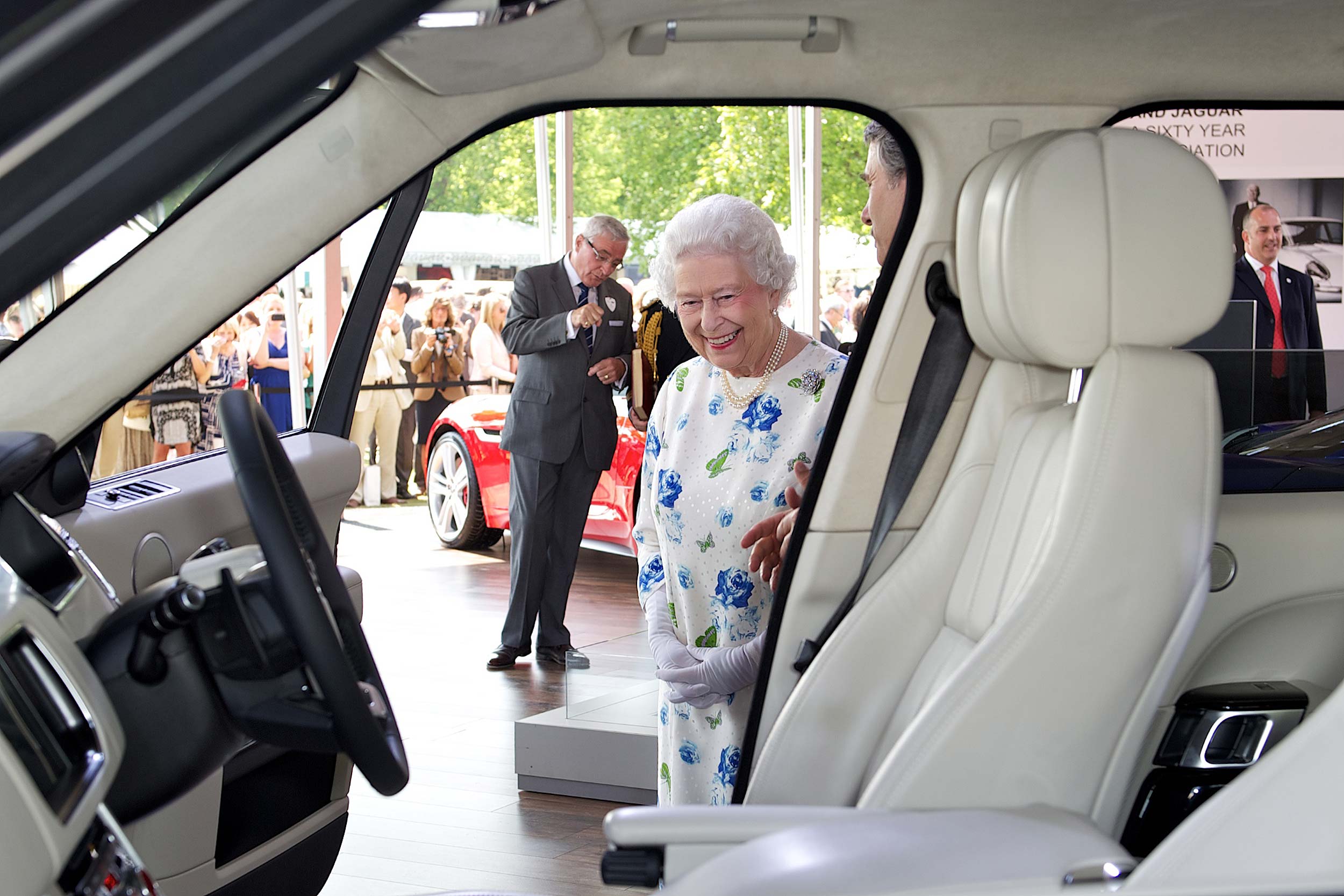 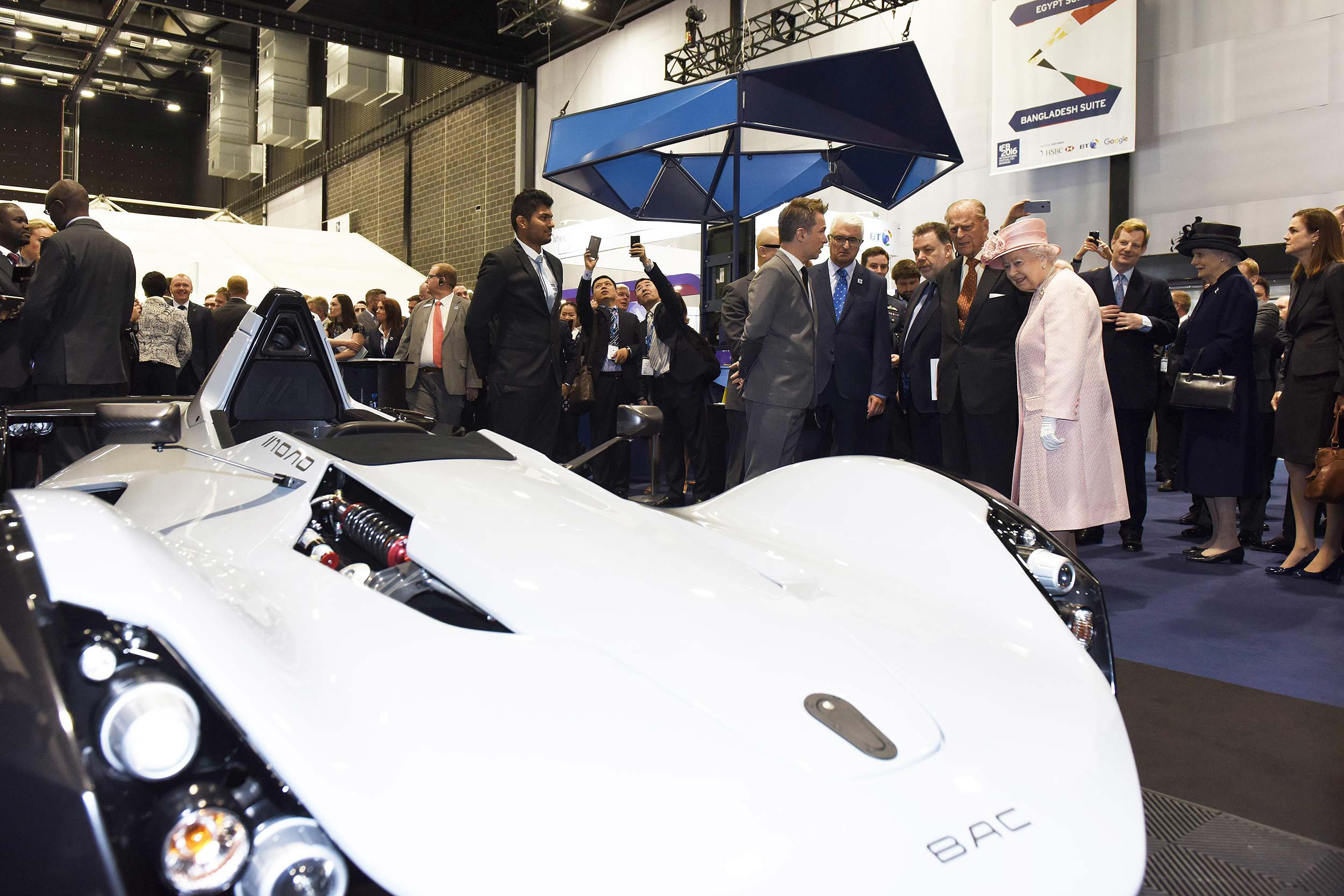 If the smile is anything to go by, the Queen is a fan of the BAC Mono, although Prince Philip looks to be wondering where Her Majesty would put the corgis. And where’s the fishing rod holder? A 0-60mph time of 2.8 seconds is all well and good, but practicality shouldn’t be overlooked. 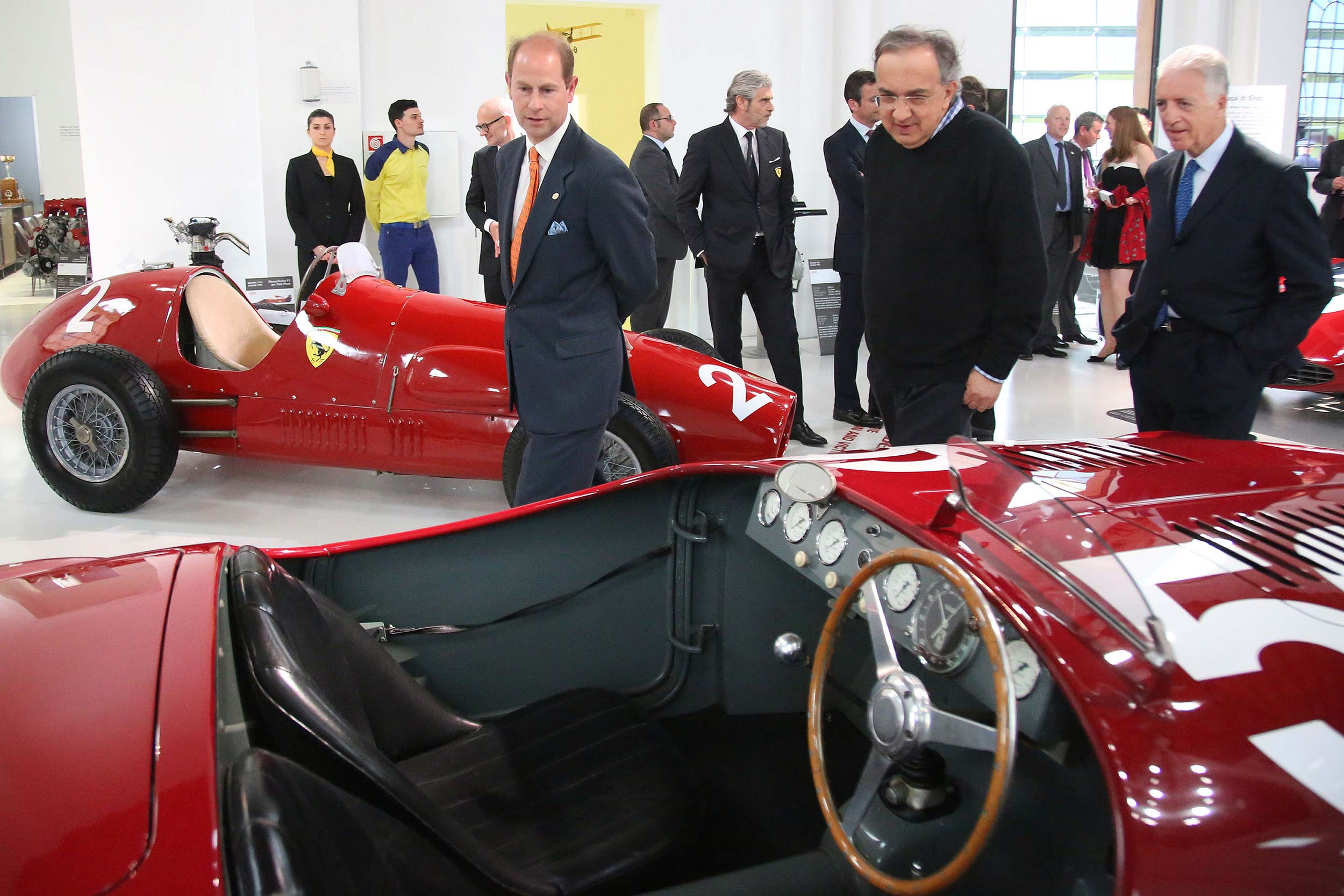 Here’s Sergio Marchionne and Prince Edward at an event organised in support of the Duke of Edinburgh’s Award, a charity that is the world’s leading youth achievement award. Prince Edward’s 10 year old son made the headlines when he was pictured behind the wheel of a Land Rover Discovery at Windsor Castle. 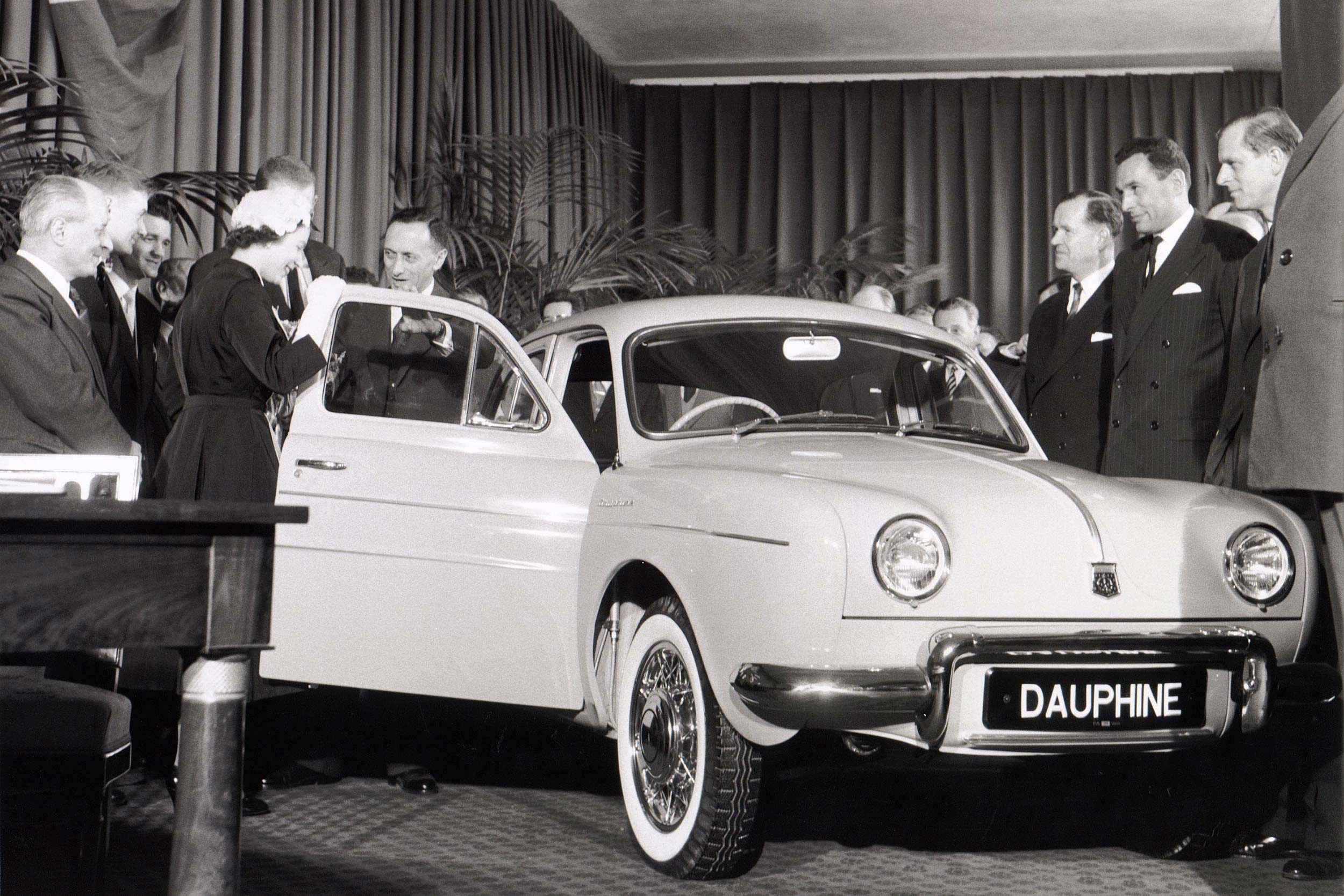 In 1905, Renault sold its first car to the British Royal Family when King Edward VII bought a 14/20hp Landaulette. Twenty-one years later, Renault established a UK base in Acton, before assembling 4CV and Dauphine models in the factory from 1950. In 1957, Renault presented Queen Elizabeth II with a gift of a Renault Dauphine built at Acton. The Prince of Wales learnt to drive in the Dauphine.