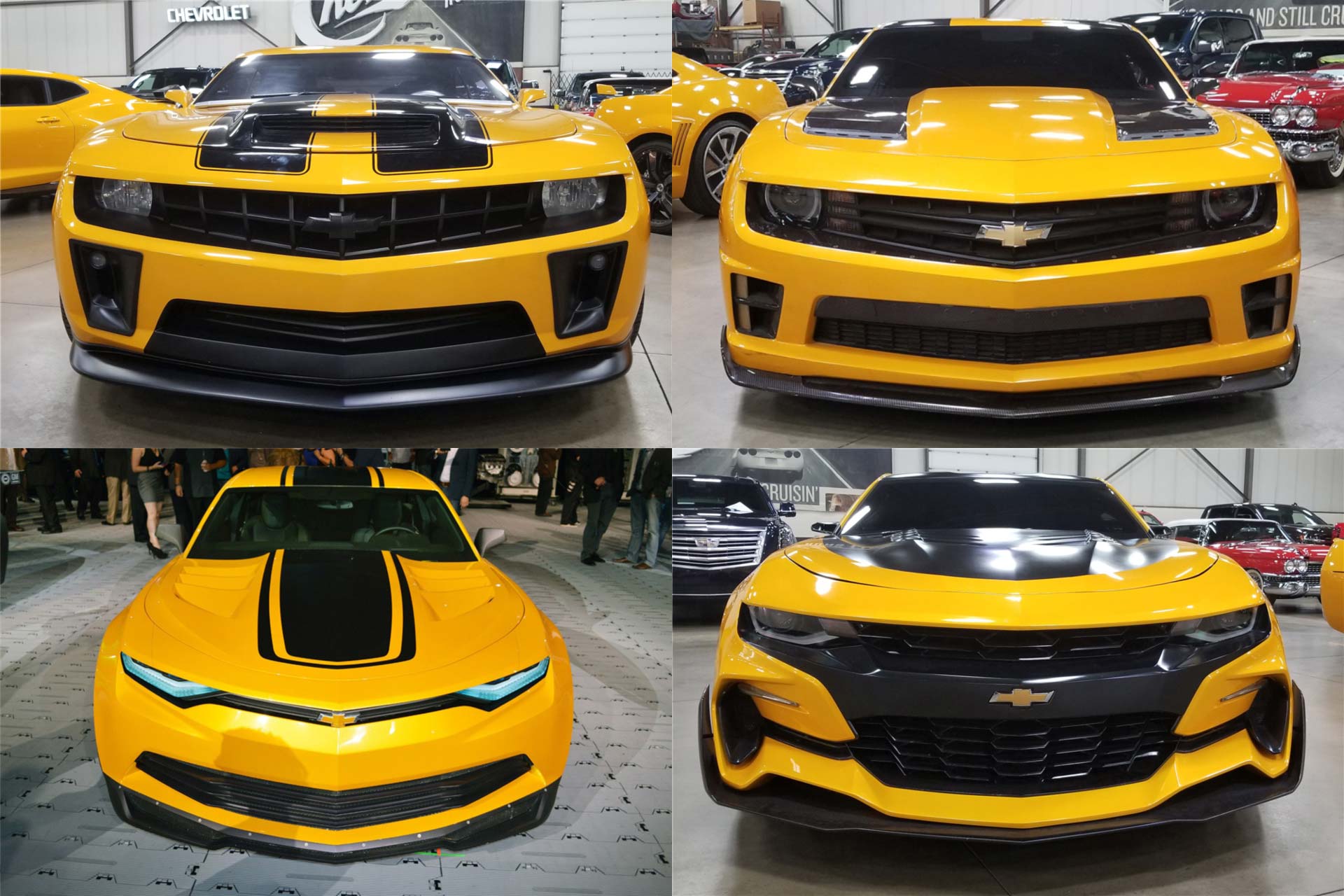 Fans of the Transformers film franchise have the opportunity to take home a serious haul of movie merchandise. The upcoming Barrett-Jackson auction in Scottsdale, Arizona will see four Chevrolet Camaros sold in aid of charity.

The latest, highly acclaimed, 2018 Bumblebee movie has returned to the use of a classic Volkswagen Beetle. However, for many the character will always be associated with the yellow and black Camaro.

Offered only as a set, all proceeds from the sale will be donated to the Operation Homefront charity. This organisation provides important assistance to American military veterans and their families.

There is one important caveat to note. None of the four cars are legal for use on the road, and are supplied on a ‘scrap title’ only. 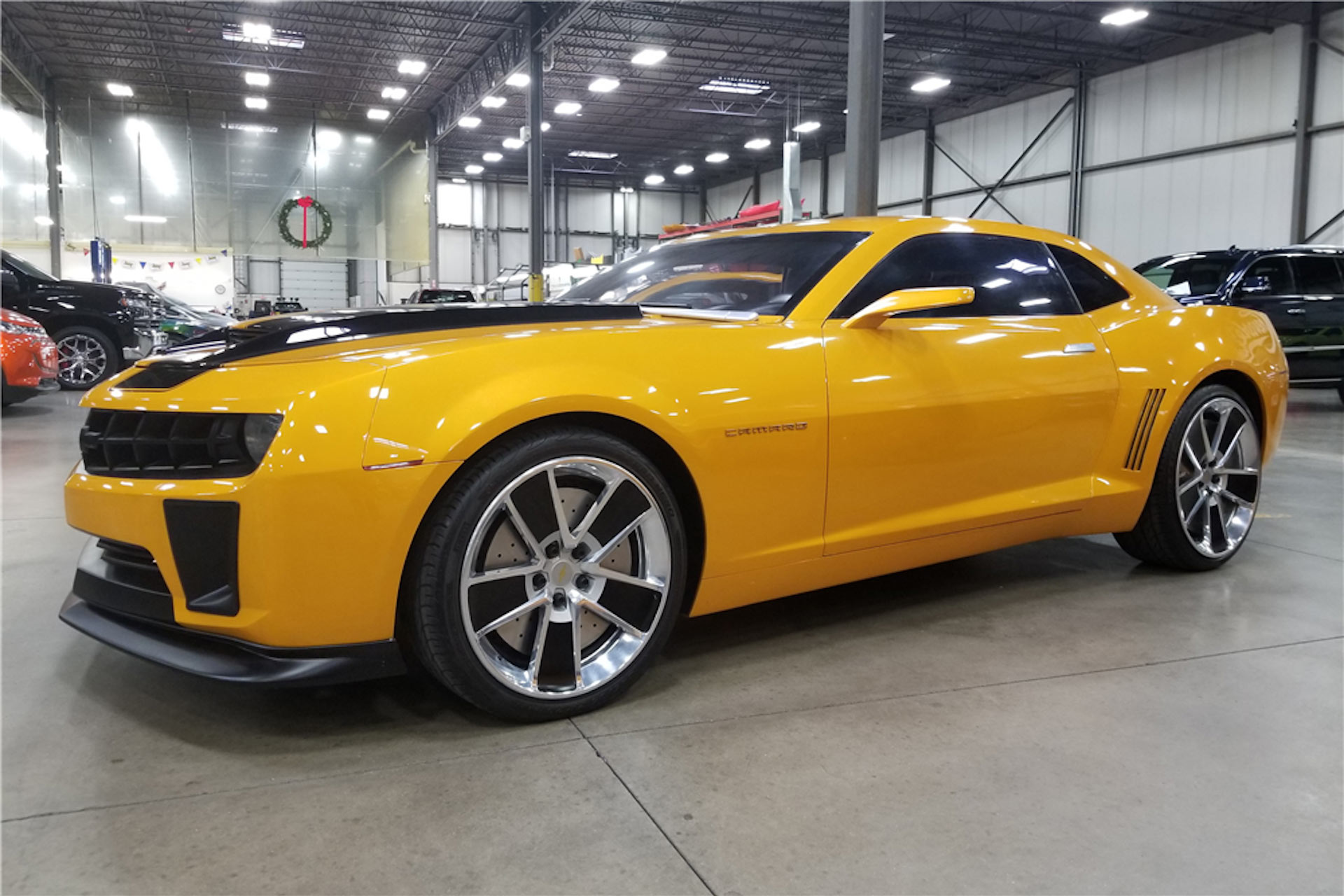 First seen in the 2007 Transformers film, this was the Camaro driven by Shia LaBeouf’s character of Sam Witwicky.

In the original movie, Bumblebee was initially a rusty second-generation Chevrolet Camaro. A transformation into the concept version of the fifth-generation Camaro certainly seemed to impress Megan Fox’s character of Mikaela Banes.

With the fifth-generation Camaro still several years from actually being released, GM had to create a bespoke car for the film. Body panels from the concept version of the Camaro were mated to a Holden Monaro chassis, using a V8 engine and rear-wheel-drive setup.

The same car was modified to resemble a more production-ready Camaro for the follow-up Transformers: Revenge of the Fallen, released in 2009. This car heads to auction in its later guise. 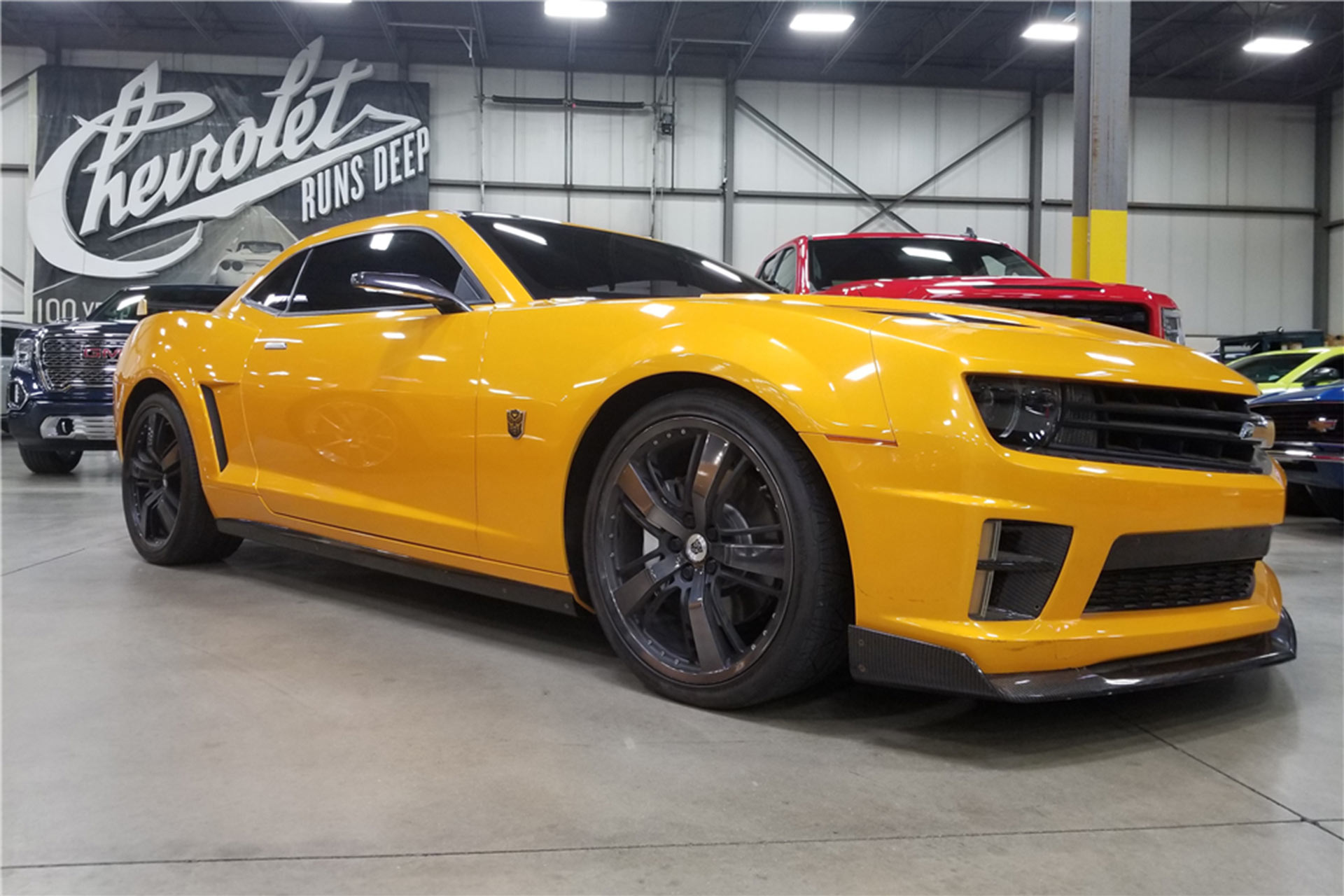 Fast forward to 2011, and the third instalment in the franchise saw the release of the Transformers: Dark of the Moon film.

Bumblebee was updated to resemble a 2011 Camaro SS, with Shia LaBeouf was again the driver. Megan Fox was out though, replaced by Rosie Huntington-Whiteley as the new female lead.

During filming in Washington DC, a Bumblebee Camaro was reported to have been involved in a real-life collision with a Metropolitan Police SUV. The two passengers of the Camaro were uninjured, although the movie car suffered substantial damage. However, the car going across the block looks to be unblemished. 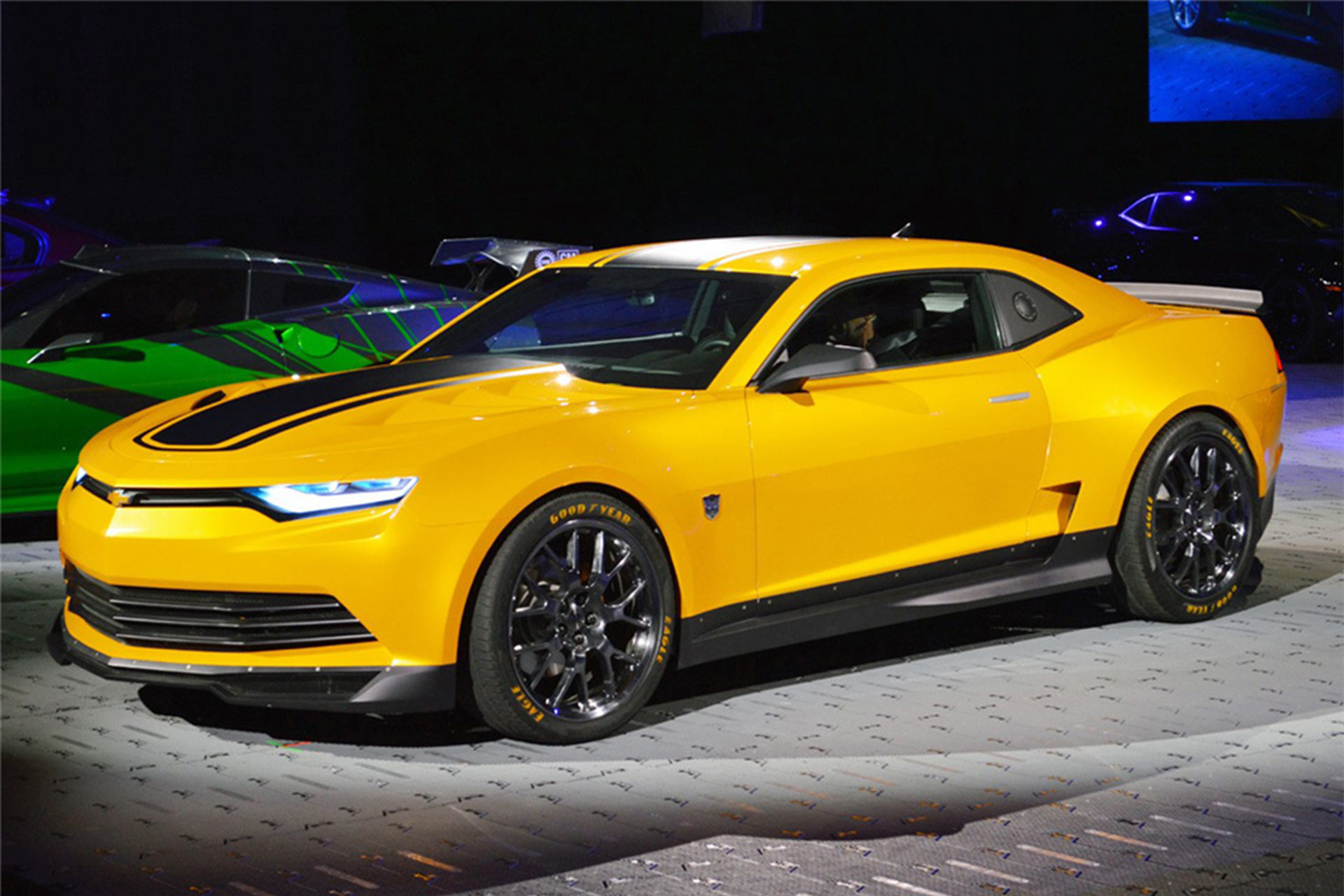 Director Michael Bay was noted to have approached General Motors before filming began for 2014’s Transformers: Age of Extinction. Bay wanted Bumblebee to appear more modern, and with greater aggression.

Despite the striking new Bumblebee, the movie itself garnered mixed reviews, with Mark Wahlberg now playing the lead role of Cade Yeager. 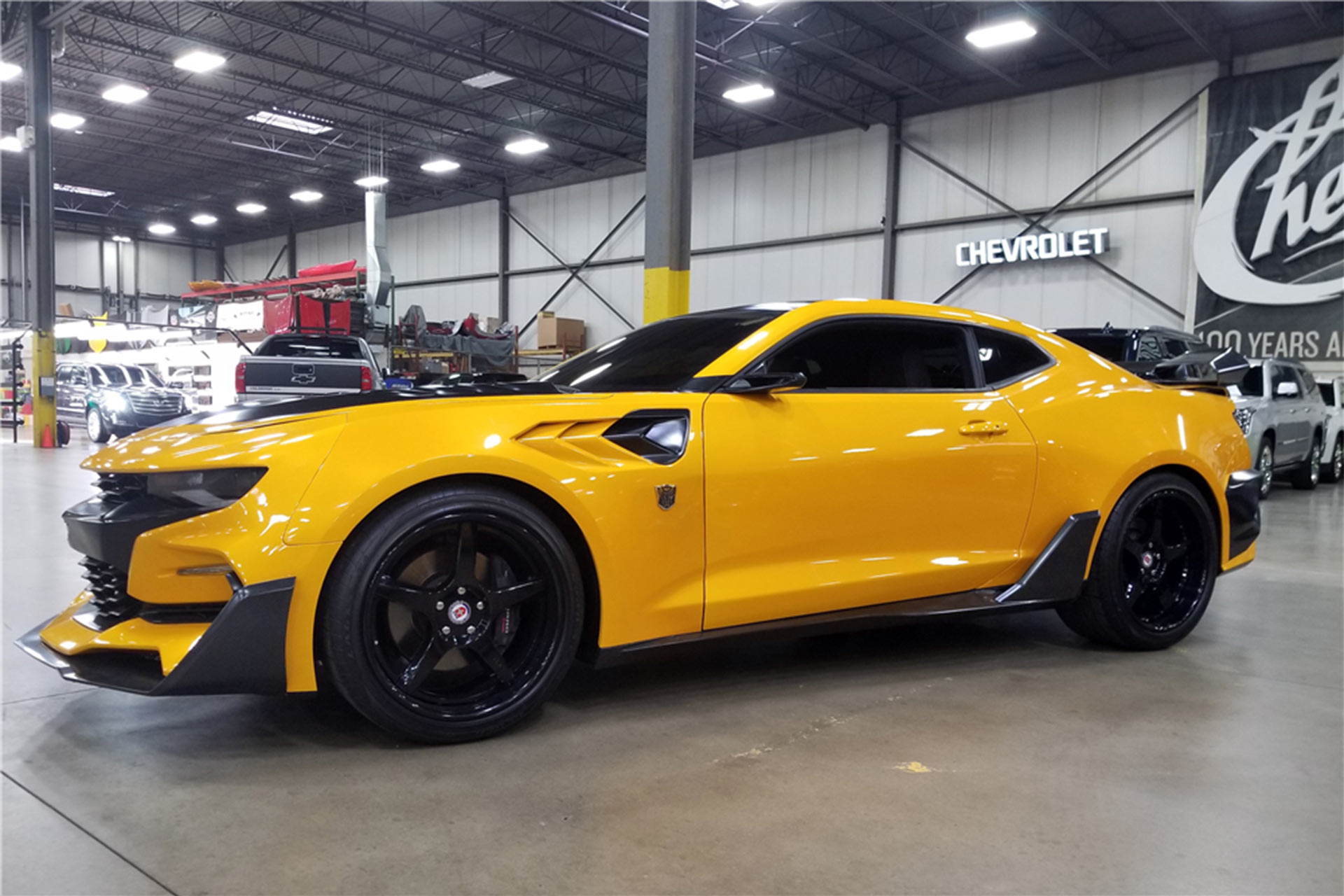 Following an established trend, the latest 2017 Transformers: The Last Knight film saw Bumblebee take on an even more dramatic form.

With styling additions which resemble the recently released 2019 Camaro SS, this is the angriest Bumblebee from the quartet on sale.

Ratings and reviews for the film were less than complimentary, with Michael Bay saying this would be his last Transformers movie. As a result, this could be the last Bumblebee Camaro we see, until the inevitable ‘reboot’ of the films occur.

If that spurs you on to want a piece of movie history, the four cars will head across the block on January 19th 2019. Barrett-Jackson allows online bidding for an auction that will see a number of other important cars up for grabs.