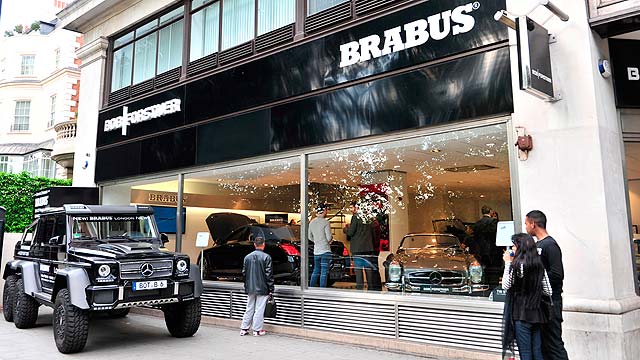 BRABUS rumbles into London, imports a staggering amount of horsepower for lucky Londoner.

BRABUS has inaugurated its flagship London showroom today with a display of modern and vintage Mercedes restored by the BRABUS Classic Division.

The Park Lane store will be targeting London’s population of 8 million in an association with partner Bob Forstner.

On show for the opening ceremony was a typically outlandish range of BRABUS: the 850 iBusiness luxury car, standout BRABUS 700 6×6, BRABUS 800 WIDESTAR iBusiness and an iBusiness-equipped Mercedes Viano.

There was also a classic Mercedes 280 SE 3.5 Cabriolet that’s the product of a ground-up restoration by BRABUS.

BRABUS founder and boss Prof. h.c. Bodo Buschmann was of course at the official opening event: “BRABUS has been highly successful on the British market for more than three decades.

“With our new BRABUS Flagship Store in London we want to be even closer to our demanding customers on the island, and we are delighted to have found the perfect partner in Bob Forstner and his team for our branch in the British capital.”

Mayfair’s flashiest row of car dealers thus now has an interesting new addition to its ranks – and, judging by the sort of automobilia on show in London, we expect business to be brisk…