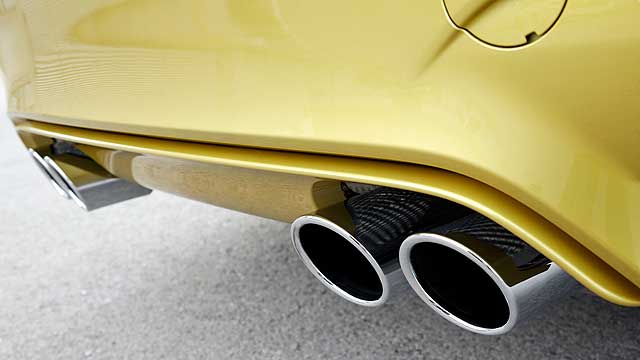 BMW has responded to customer feedback and engineered the engine noise of the new M3 Saloon and M4 Coupe to be as ‘real’ as possible.

“The engine note in the cabin is largely pure,” said BMW M head of project management Carston Pries at the international launch of the new M3 and M4. “The electronic noise is minimised and only makes up 2% to 3% of the sound you hear.”

Critically, there will also be no artificial sound generation – the electronic noise (which BMW calls Active Sound) will instead simply be a real-time amplification of induction noises actually produced by the engine.

Instead of relying on electronic overlays for the audio fireworks, BMW M has engineered in ‘pure’ noise from the exhaust instead – and it’s the addition of two actuators on each of the twin tailpipe sets that’s responsible for most of this.

When activated, these bypass the rear silencer, making the back box almost completely straight-through. “They are active whenever the car is in Sport or Sport Plus mode, or when the revs are above 4,000rpm.”

BMW Active Sound was a controversial addition to the M5. BMW says “it delivers an accurate reproduction of the engine’s sound through the car’s audio system’, and includes artificial sound generation.

We can report the results of the latest Active Sound approach are impressive, particularly at high revs, with a rawness lacking in the BMW M5. It minutely varies in intensity and pitch according to engine load and accelerator position – a level of detail lacking in the M5’s Active Sound system, and a key reason why it’s now so convincing. Critically, many will never guess it’s electronically assisted…

Question is, will enthusiasts like it – and will BMW now follow this strategy in the M5 too?