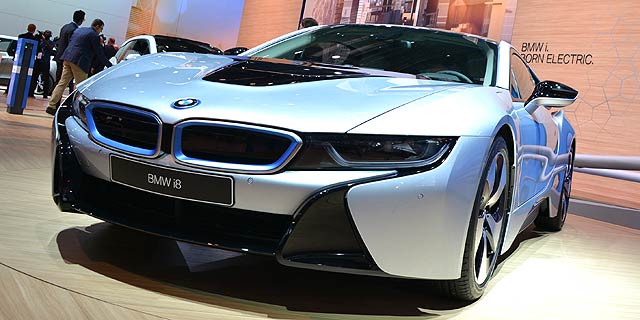 BMW has revealed its new i8 petrol-electric range-extender supercar will cost from £99,895 – and dealers are already taking pre-orders for the 155mph, 113mpg coupe.

The high-performance i8 will be the second BMW i car to go on sale, following the launch of the i3 electric city car which goes on sale in BMW dealers this weekend.

BMW i8 stars at the 2013 Frankfurt Motor Show

BMW is nevertheless expecting strong interest for the i8, not least because it delivers high performance in such a fresh way. It accelerates to 62mph from rest in 4.4 seconds and, like most BMWs, has a top speed limited to 155mph.

However, it can also travel over 20 miles under electric power alone when the batteries are fully charged, and overall fuel economy even when the engine does kick in is 113mpg – giving CO2 emissions of just 59g/km.

This will mean the new BMW i8 supercar is exempt from the London Congestion Charge and gets free road tax.

There is added British interest in the i8: its unique 1.5-litre three-cylinder turbo petrol engine is built at BMW’s high-tech plant in Hams Hall near Birmingham. The motor (and supplementary electric motor) drives the rear wheels, while the big electric motor drives the front wheels.

What’s more, given how the BMW i8 is just 0.2 seconds slower than the alternative BMW M6 Coupe, yet officially returns 84.5mpg MORE per gallon, could BMW have created some interesting inter-range competition with the launch of the i8? Next summer, we shall find out…