How do police forces chose their new cars? By visiting their very own motor show, that’s how! 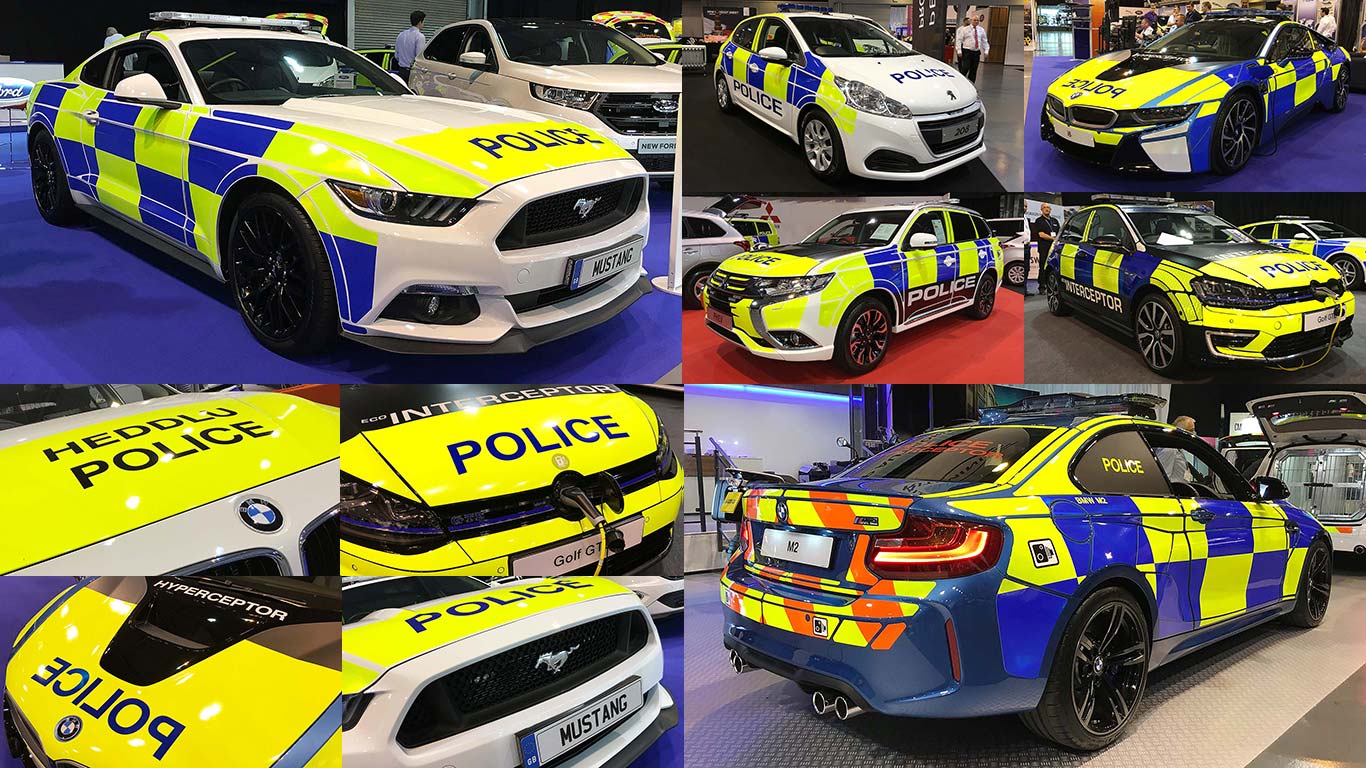 Hundreds of police cars all under one roof – if you’re part of the criminal fraternity, it’s the stuff of nightmares, but for the rest of us, it’s an amazing insight into how police forces choose and buy their new cars. We visited the National Association of Police Fleet Managers (NAPFM) 2016 motor show to see what a motorshow for police officers is really like. 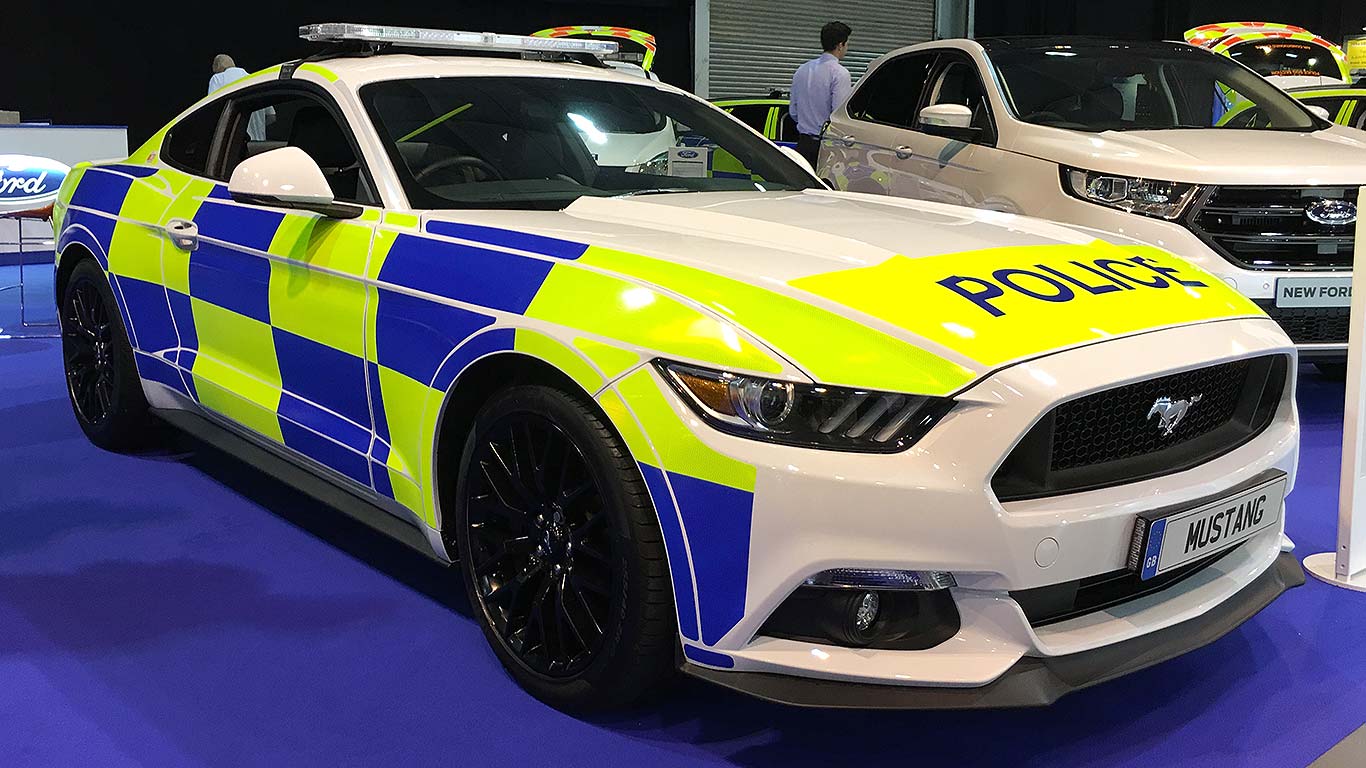 As already featured on Motoring Research, the undoubted star of the 2016 NAPFM exhibition is Ford’s remarkable police-liveried Mustang. Decked out in the very same high-vis stickers used by all other police cars, crowds flocked to it and rightly so.

It’s as if the Ford Mustang was born to be a British police car, no? There’s already no missing a new Mustang on British roads at the moment: add in a police makeover and the very last excuse you could ever use would be that you didn’t see them, officer.

Thing is, this is no promo showcase – a spokesman admitted to use that forces are already assessing the new V8-engined Mustang. Perhaps not for liveried-up duties, but certainly as a fast-response car. Indeed, look outside, advised the Ford man… 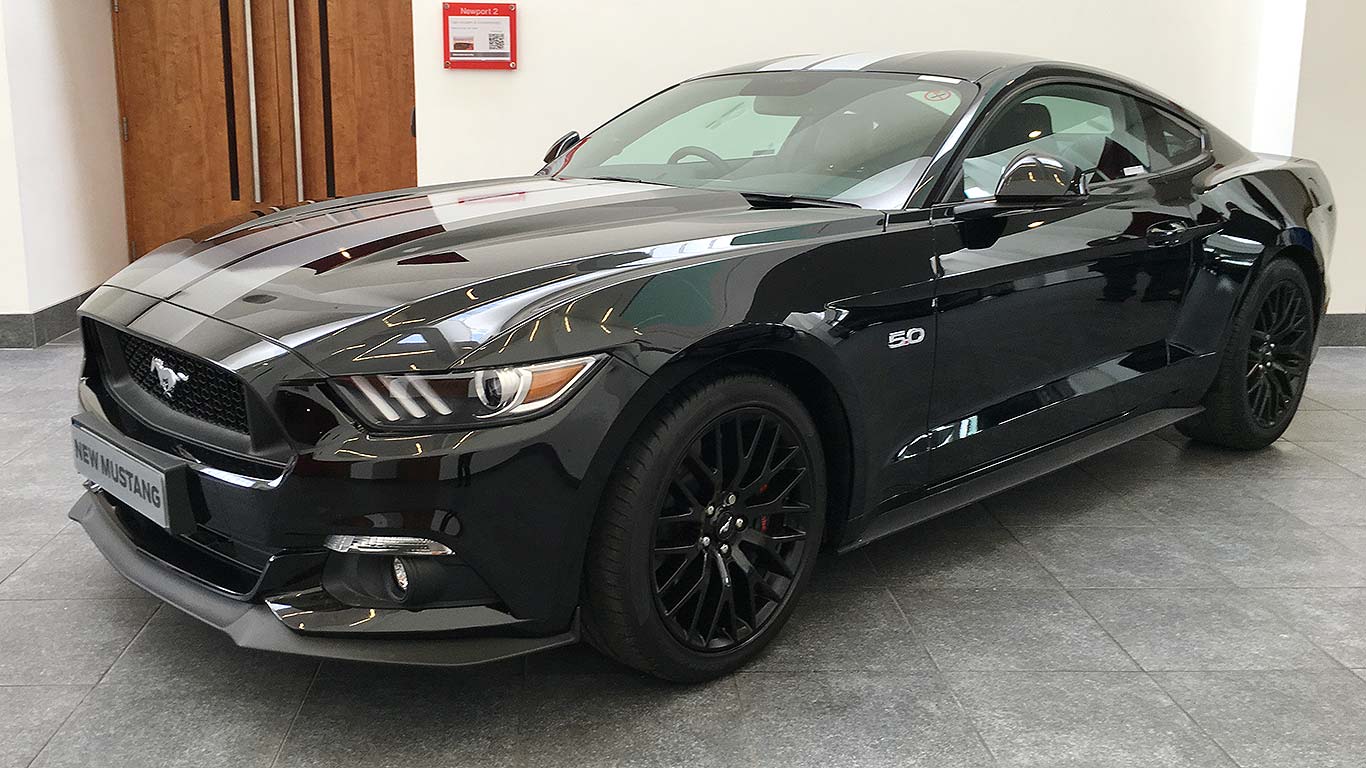 …Yes, there indeed was the actual Ford Mustang currently being assessed by forces across the country, taking a few days out its busy schedule to appear at the NAPFM show. So, why are forces so interested in it? Because huge performance for less than £35,000, that’s why. You’ll struggle to find a bigger bang for your buck, and when that buck is the public’s money, this sort of stuff counts… 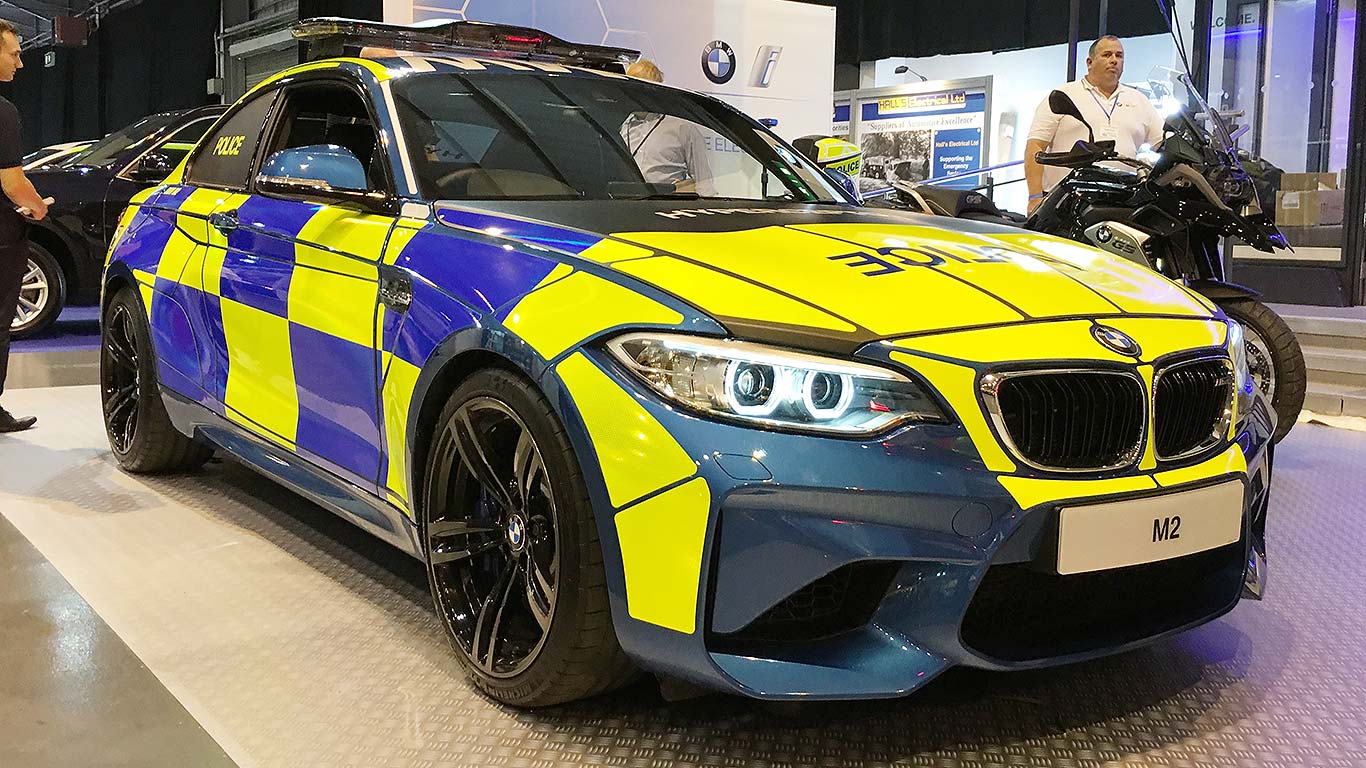 The regular BMW M2 costs around £44,000, but add in a decent police discount and you could have something that, like the Mustang, financially stacks up. With even mainstream hot hatches becoming ever-more powerful, police forces need to up their performance accordingly to stand a chance of catching miscreants. Enter cars like the M2.

So although it seems a bit of a stunt to have the mighty new M2 at a police car show, it’s actually not as wild as it sounds. Don’t be surprised if a few forces place a discreet order for the wild new M2 – perhaps not wearing livery quite as standout as this, though. Remember, stealth matters. 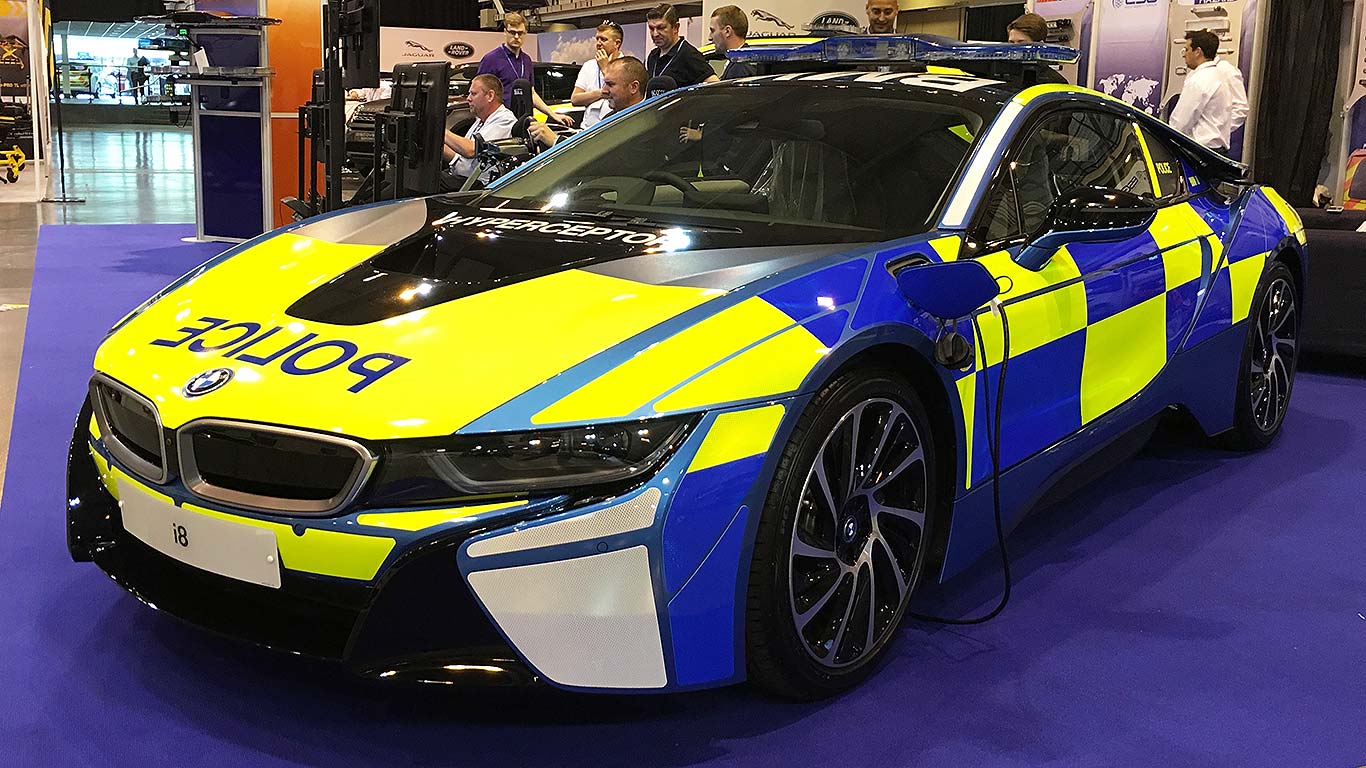 If police forces are keen on expanding their BMW fleet with the high-performance M2, why not add on an eco angle too with the clean and green BMW i8? We admit, this probably is a promo special – we pity the fully-uniformed officers who’d have to quickly jump in and out of the wild gullwing supercar – but its presence was welcome.

Not least because some genius in BMW’s livery department added on the words ‘hyperceptor’. The BMW hyperceptor police car. Yes, we’re sold. 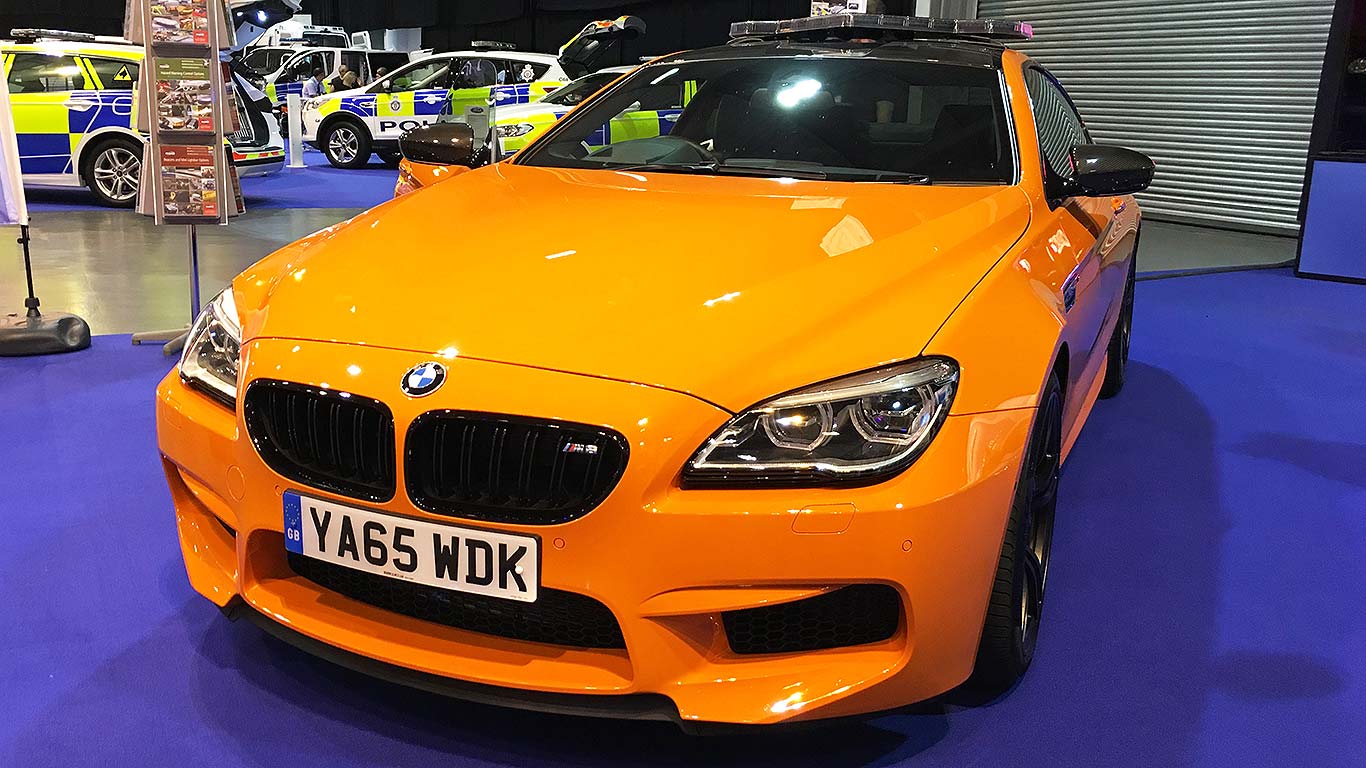 Of course, sans livery, BMW M cars make great undercover cars. Apart from the light bar on the roof, you’d never guess this was a police car. Just one problem: the colour is hardly ‘stealth’. 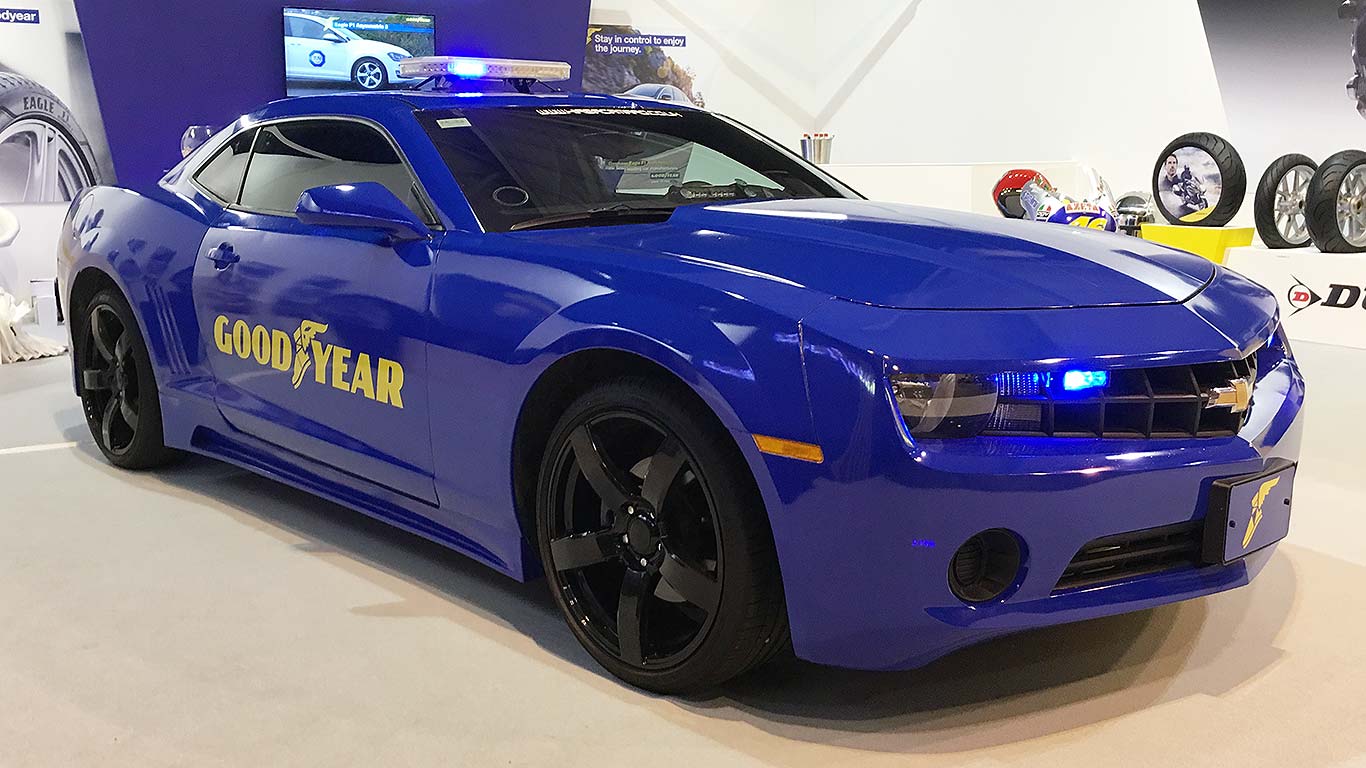 Police forces chomp through tyres, which is why Goodyear was at the police car motor show to exhibit its latest rubber. With the help of a rather cool-looking U.S.-inspired Chevrolet Camaro. 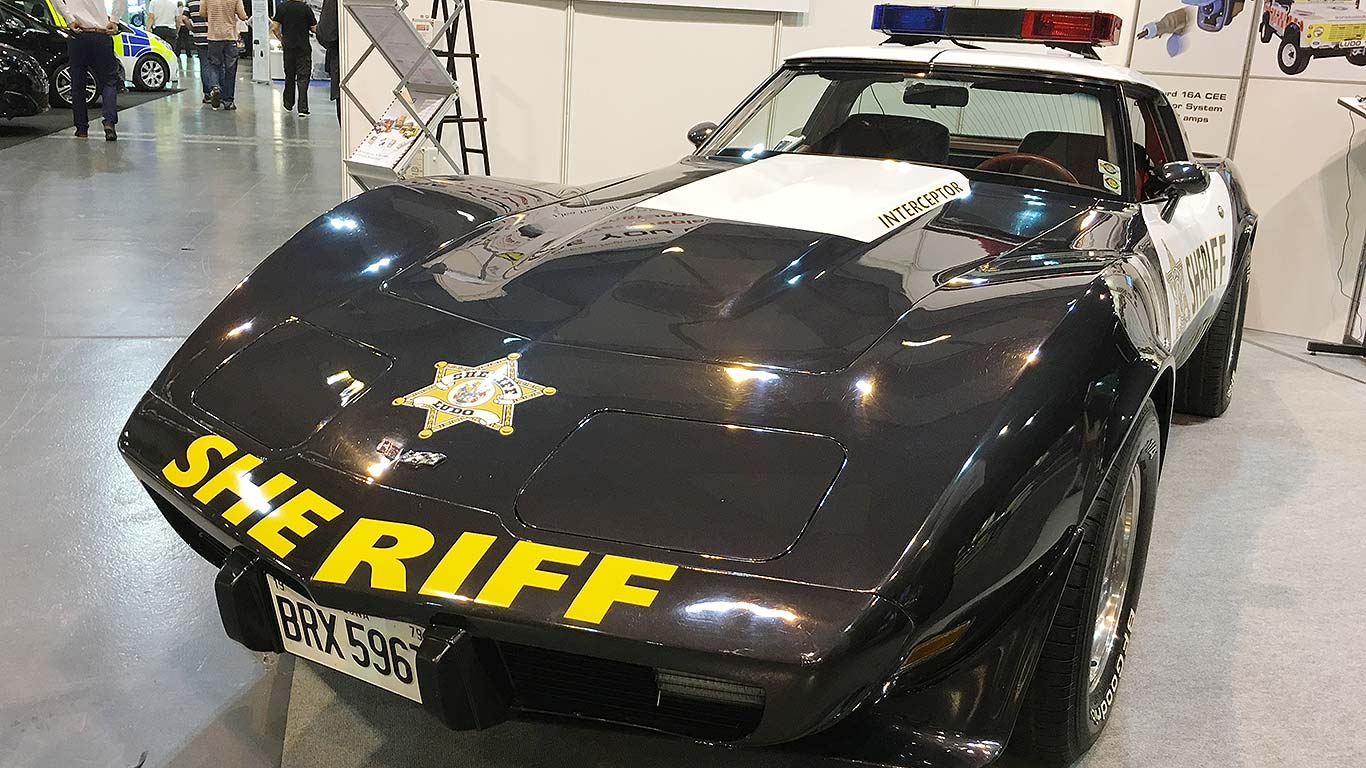 And just around the corner was this retro star, a 1970s Corvette that appears to have been snaffled by the Sheriff as his own personal company car. Well, why not? 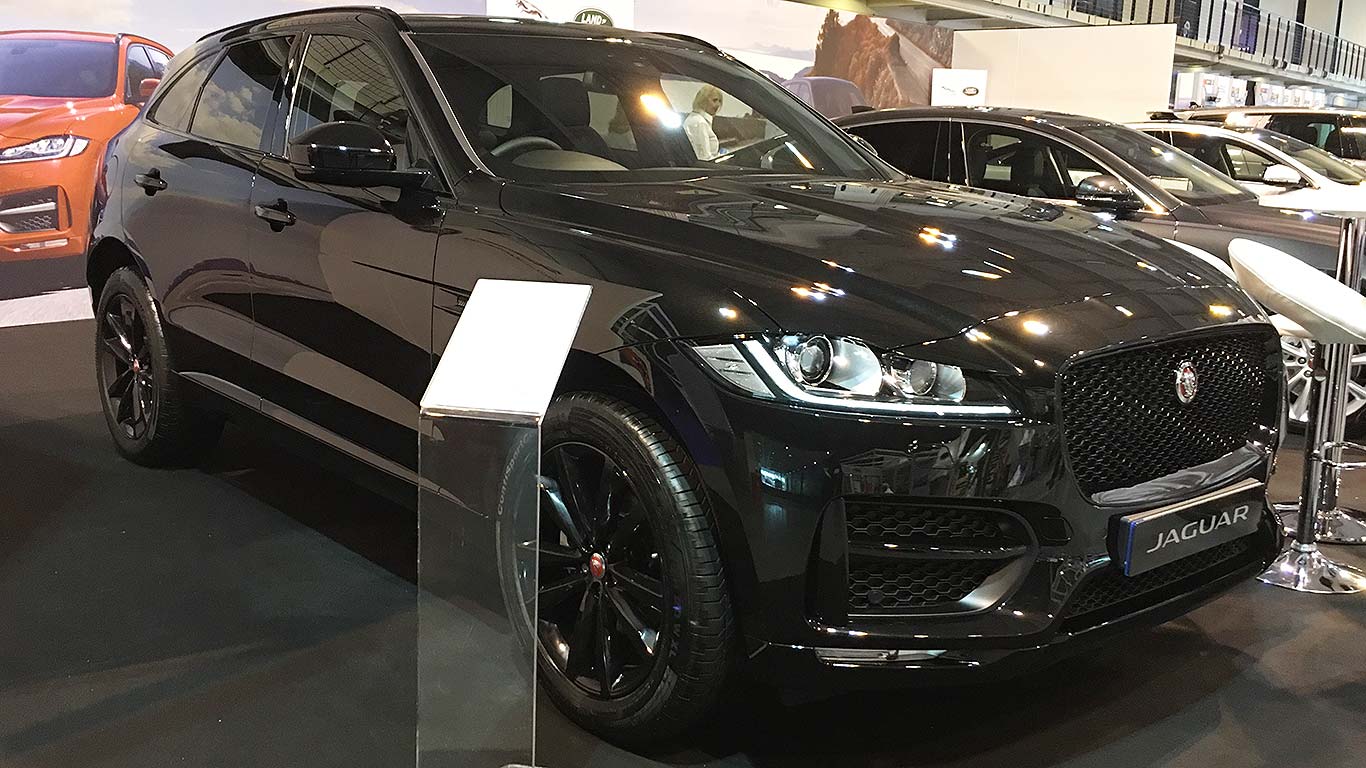 SUVs are taking over in Britain so it’s natural this will extend to the police force. We wonder which force will be the first to get its hands on a new Jaguar F-Pace, the most in-demand SUV of the moment? The fact it’s at the NAPFM show suggests it won’t be long… 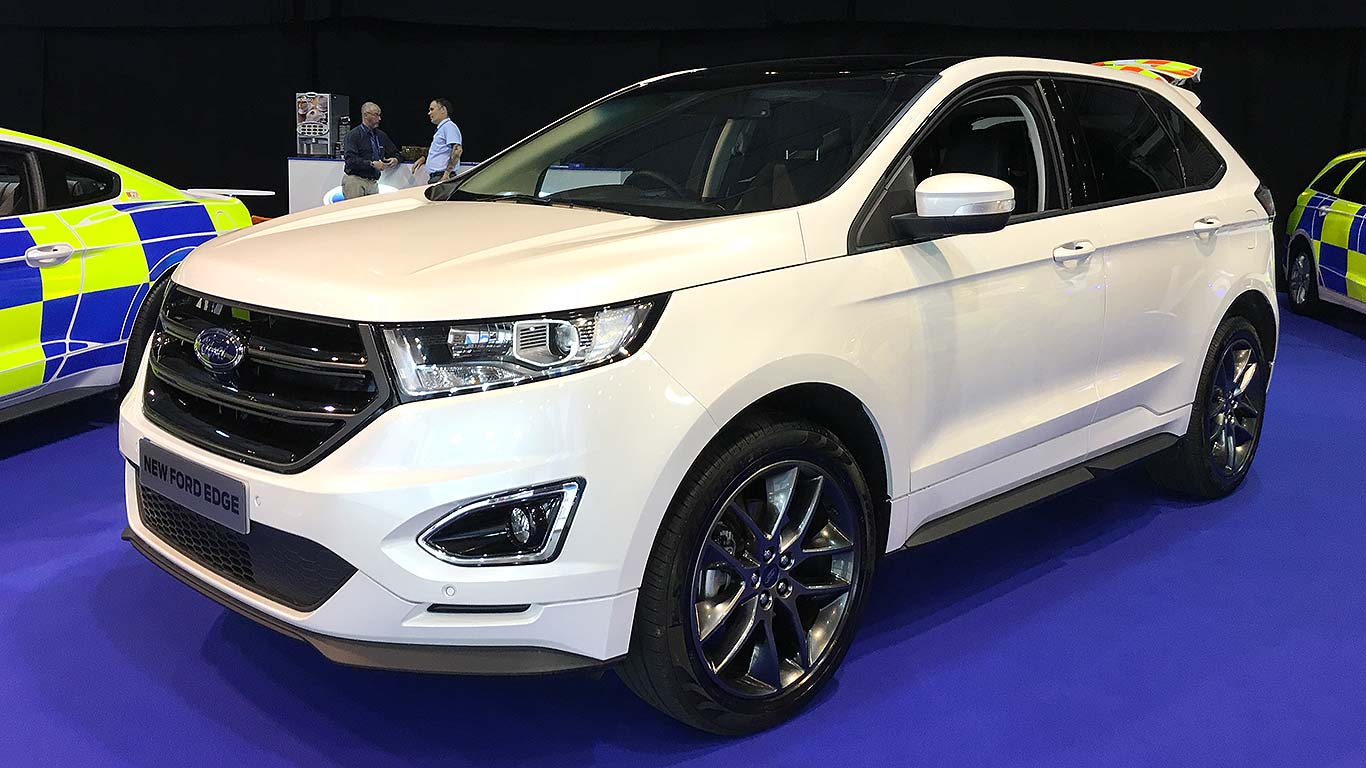 The new Ford Edge is barely on sale in the UK but already it’s headed to British police forces – the firm admits interest in it has been healthy, because of its low price, low emissions and ample space inside. 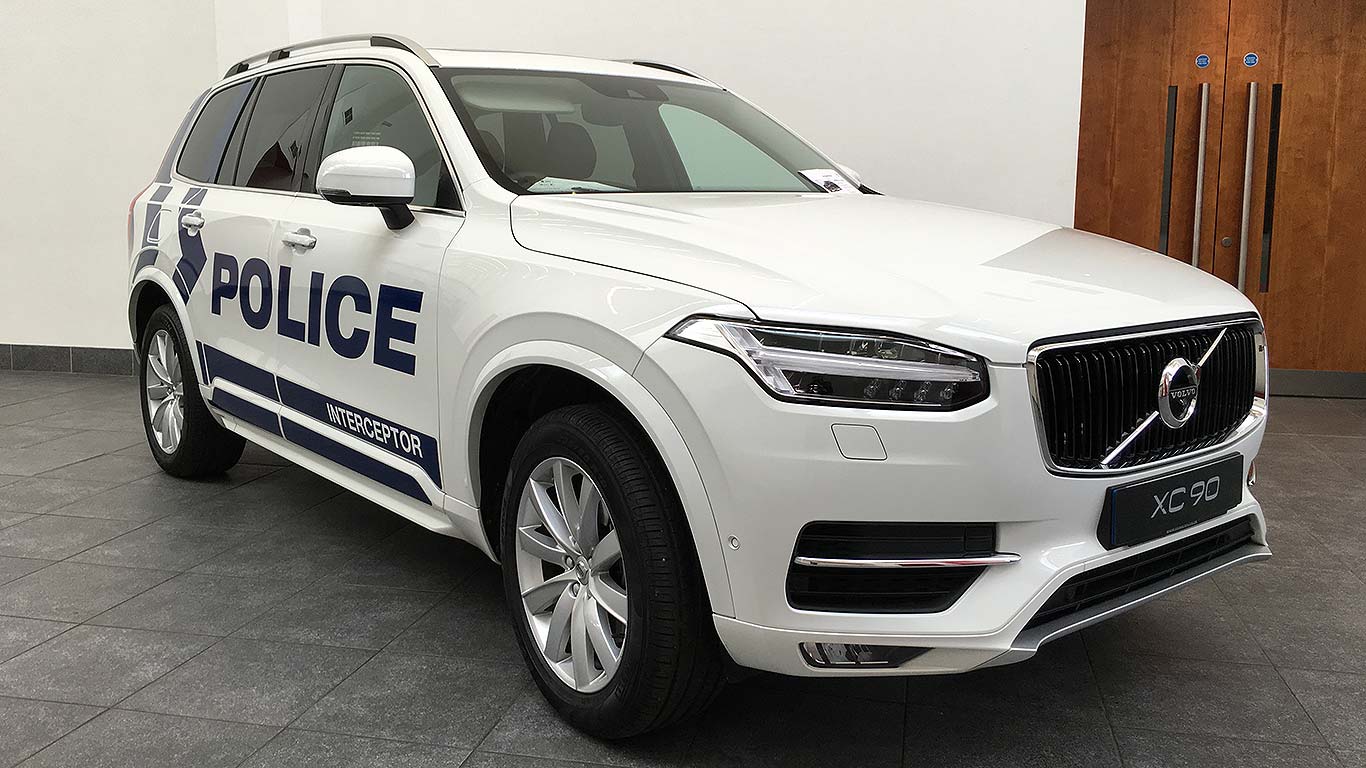 Volvos are favourites of the police and we’re sure many will be clamouring to get into the new XC90 – not least because there’s an eco-friendly high-performance plug-in hybrid T8 model that has potency in spades but will also help forces tick their green fleet commitments. 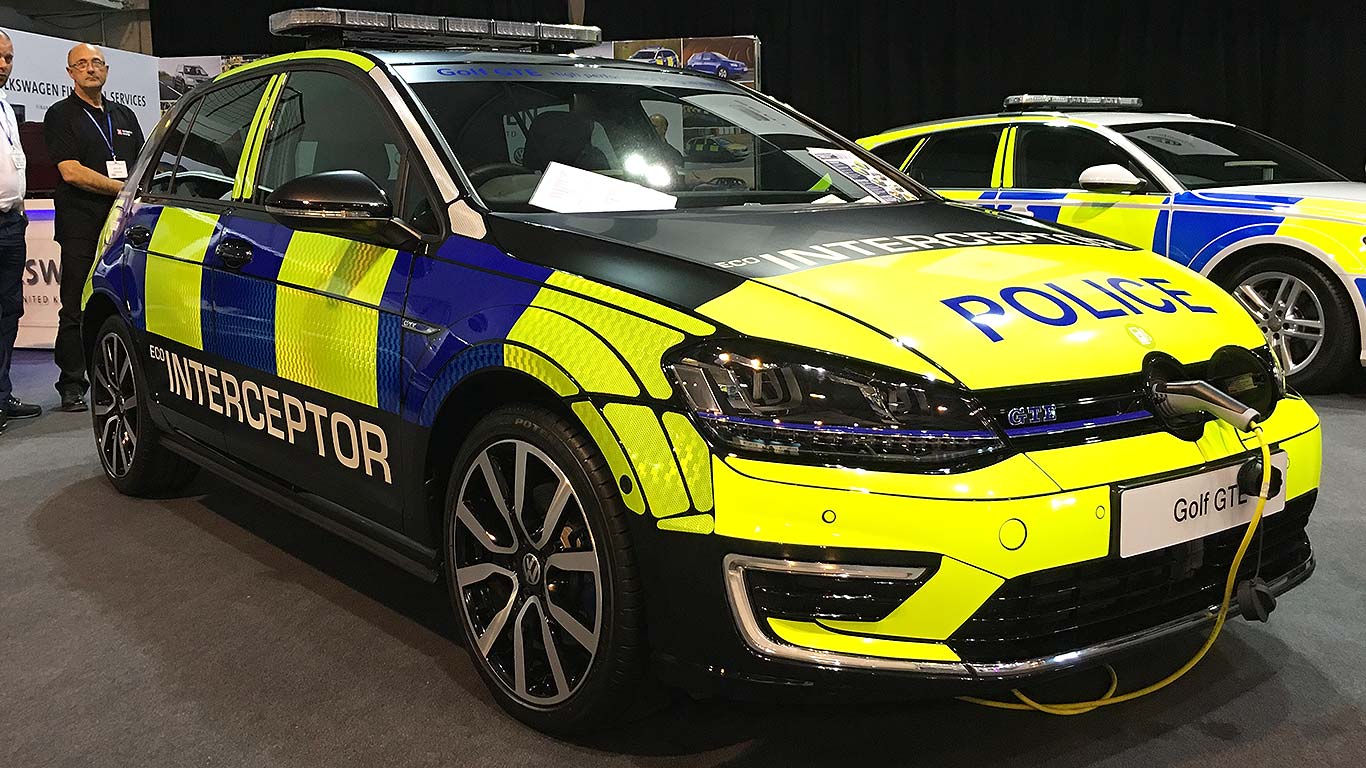 Speaking of green fleet commitments, how about a plug-in hybrid Volkswagen Golf GTE? It’s the eco-friendly GTI and, in this fantastic ‘eco-interceptor’ livery, looks fantastic.

If police forces are carrying out low-speed local duties, it works as a full EV so they can do their bit for inner-city emissions. But the TSI petrol engine is ready in the background should the need for long-distance performance arise. Such green considerations may be a growing part of police car fleet policies in the future so we may well start to see more and more cars such as the Golf GTE on police fleets. 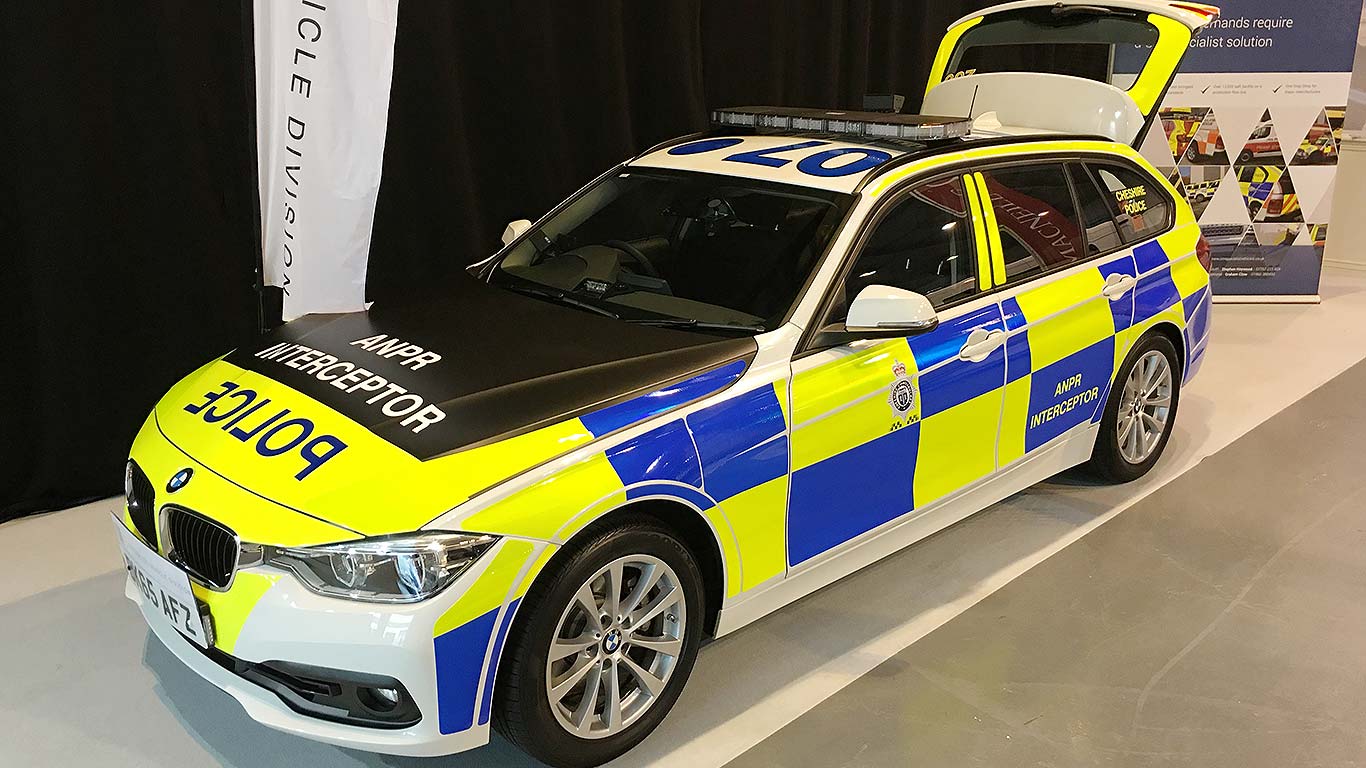 A more familiar police car is the BMW 3 Series, seen on motorways across the land. This is fully decked out in ANPR interceptor equipment: simply by driving around and automatically clocking vehicle registration plates, police can find those driving without tax, insurance or MOT. You have been warned… 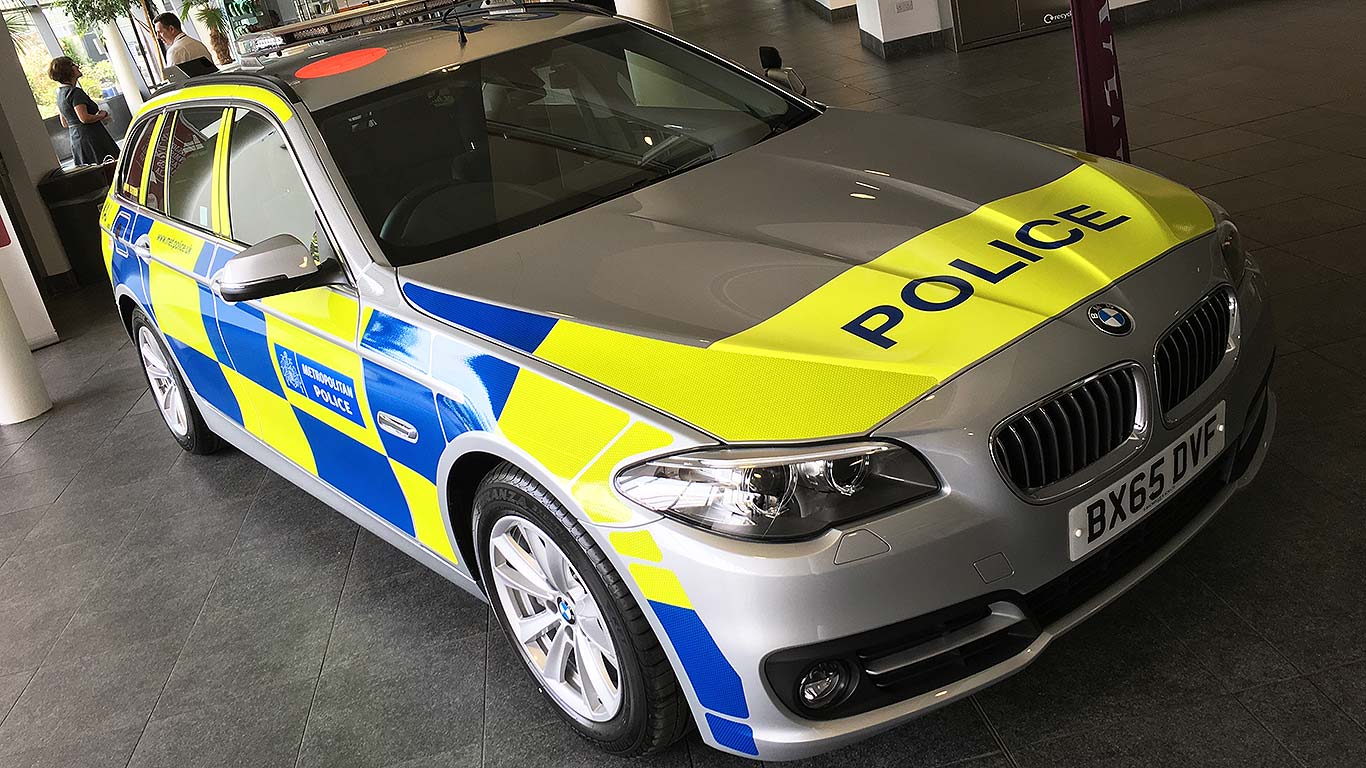 For every police 3 Series, there seems to be a police BMW 5 Series. This model looks like it’s been driven straight off duty for a few days on display before heading out back to Met police duty. The show was a rare chance to get up close to police cars without breaking the law… 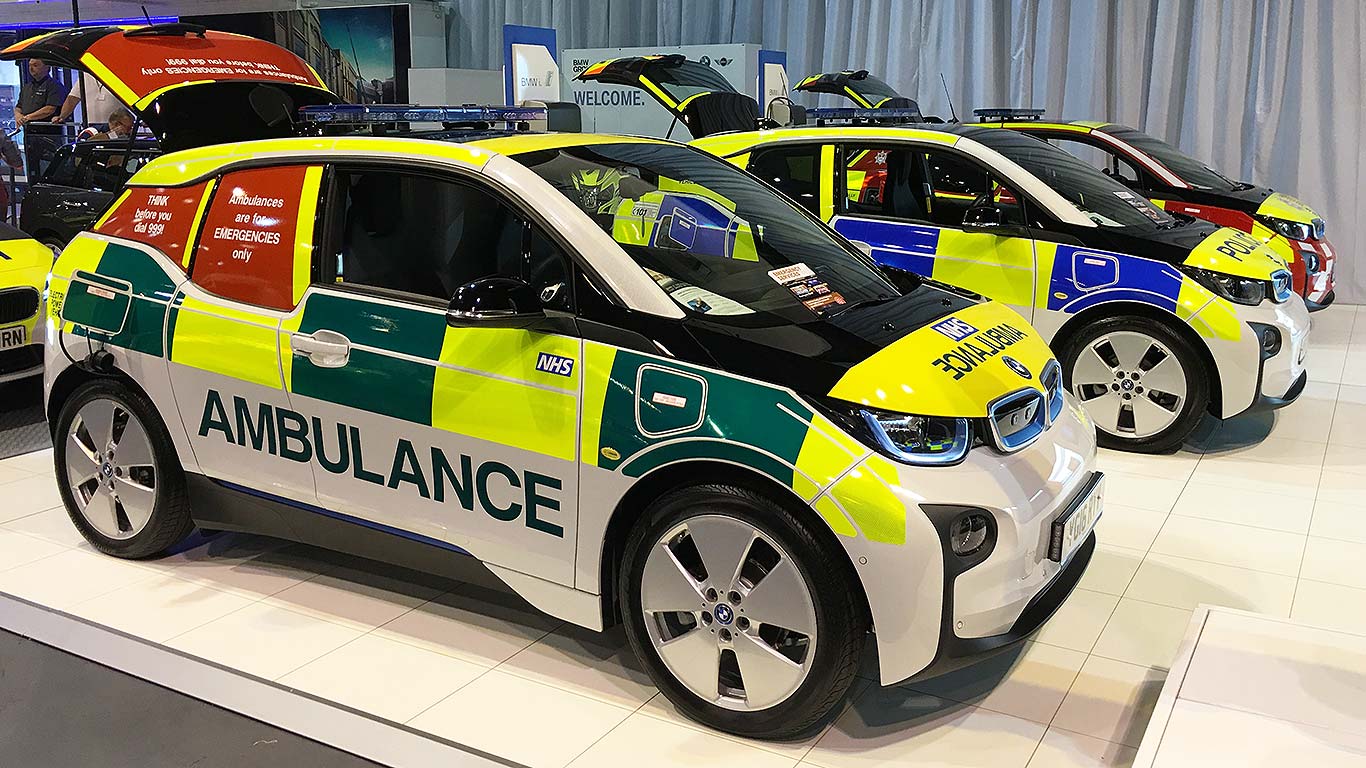 It wasn’t just police cars on display at the show – other blue light vehicles such as ambulances and fire brigade vehicles were being showcased. How neat does this trio of BMW i3 look?

Again, reflecting a need to make emergency services more green, BMW was showing off the i3 to those who want long-range zero-emissions use with the backup of BMW’s range-extender engine if the blue lights need to be turned on. 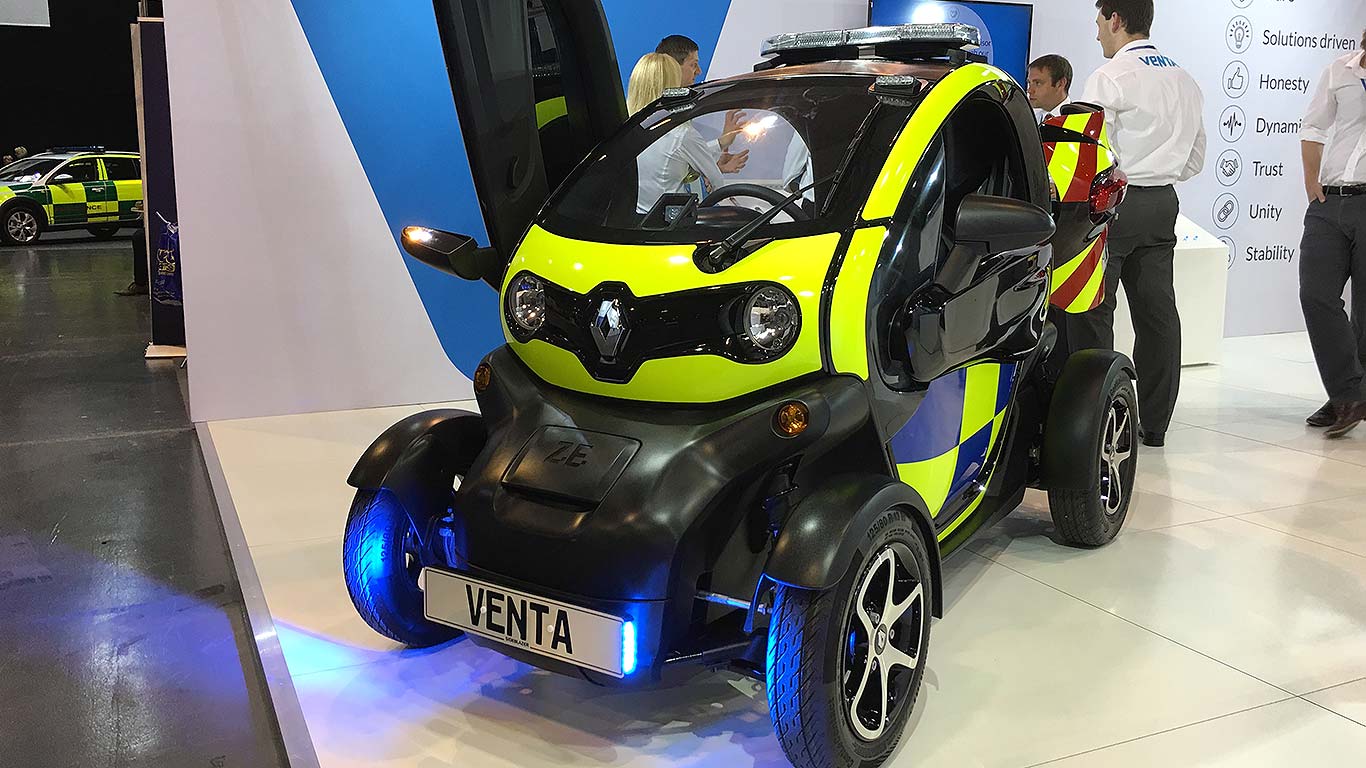 The quirky Renault Twizy is oddball, but for certain police tasks, could have a place. It has size on its side, it’s green, it’s agile… just don’t press it into higher-speed, longer-distance use, though…

Just 30 percent of people working in the automotive industry believe the UK government does enough to incentivise uptake of electric cars.
Read more

McLaren has revealed the production version of the Senna GTR and yes, it's sold out. A concept of it debuted at last year's Geneva Motor Show
Read more

Celebrating 70 years of the Morris Minor

The Morris Minor was unveiled at the 1948 British Motor Show. We take an affectionate look back at this British institution
Read more

Is this the new way to spot future classic cars?

“Nostalgia isn’t what it used to be,” reads a press release from independent car auction specialist, G3 Remarketing. It thinks the way classics earn...
Read more