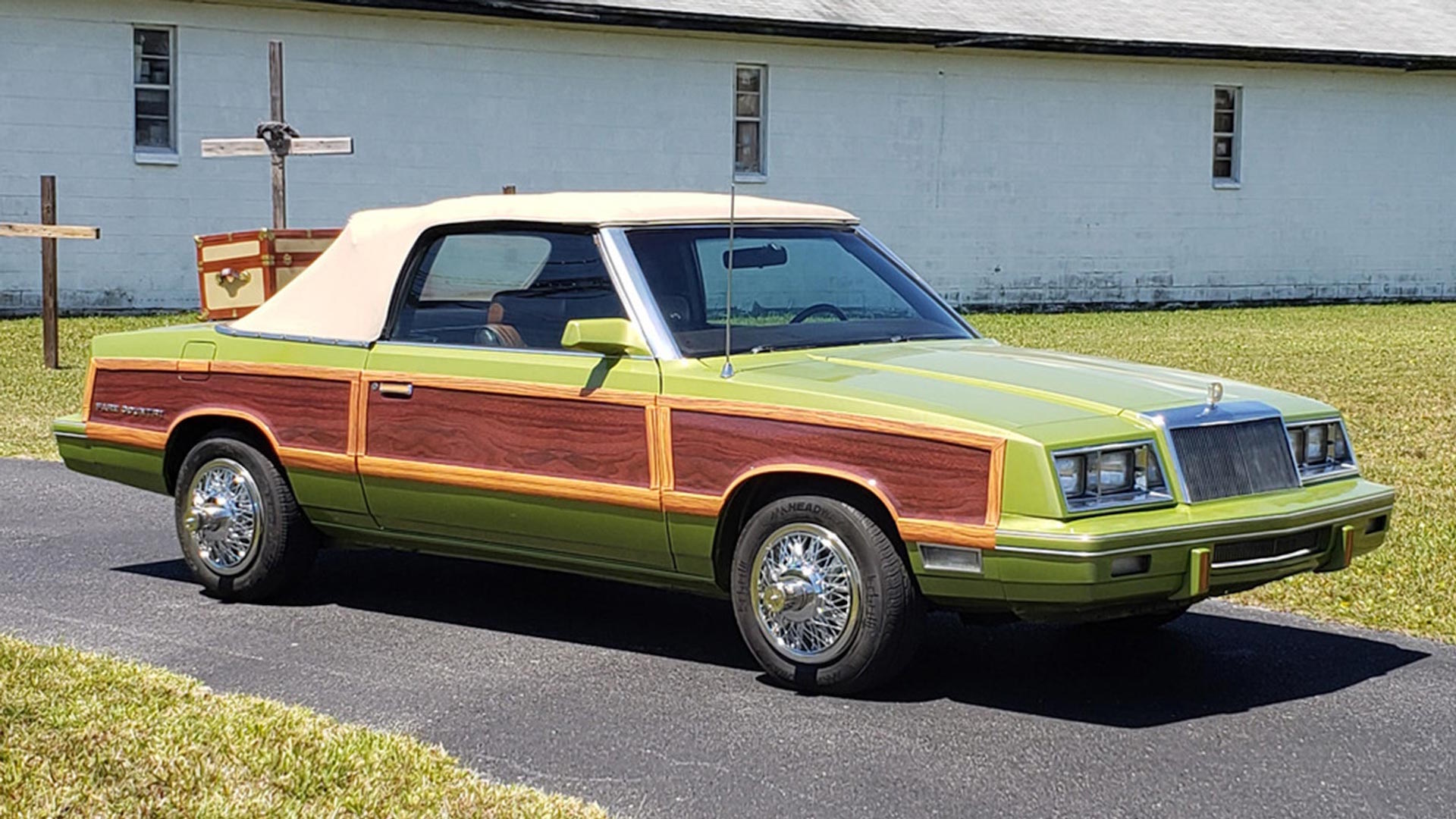 Fans of the 1987 comedy movie Planes, Trains and Automobiles have the chance to buy a recreation of the car which took a starring role in it.

The film, written, produced and directed by John Hughes, sees characters portrayed by Steve Martin and John Candy trying to get home to Chicago for thanksgiving.

Various mishaps and catastrophes happen along the way, including the gradual destruction of a rental car. A Chrysler Town & Country convertible was used as the basis for the distinctive hire car, with a replica of it heading to auction later this month.

“May I see your rental agreement?” 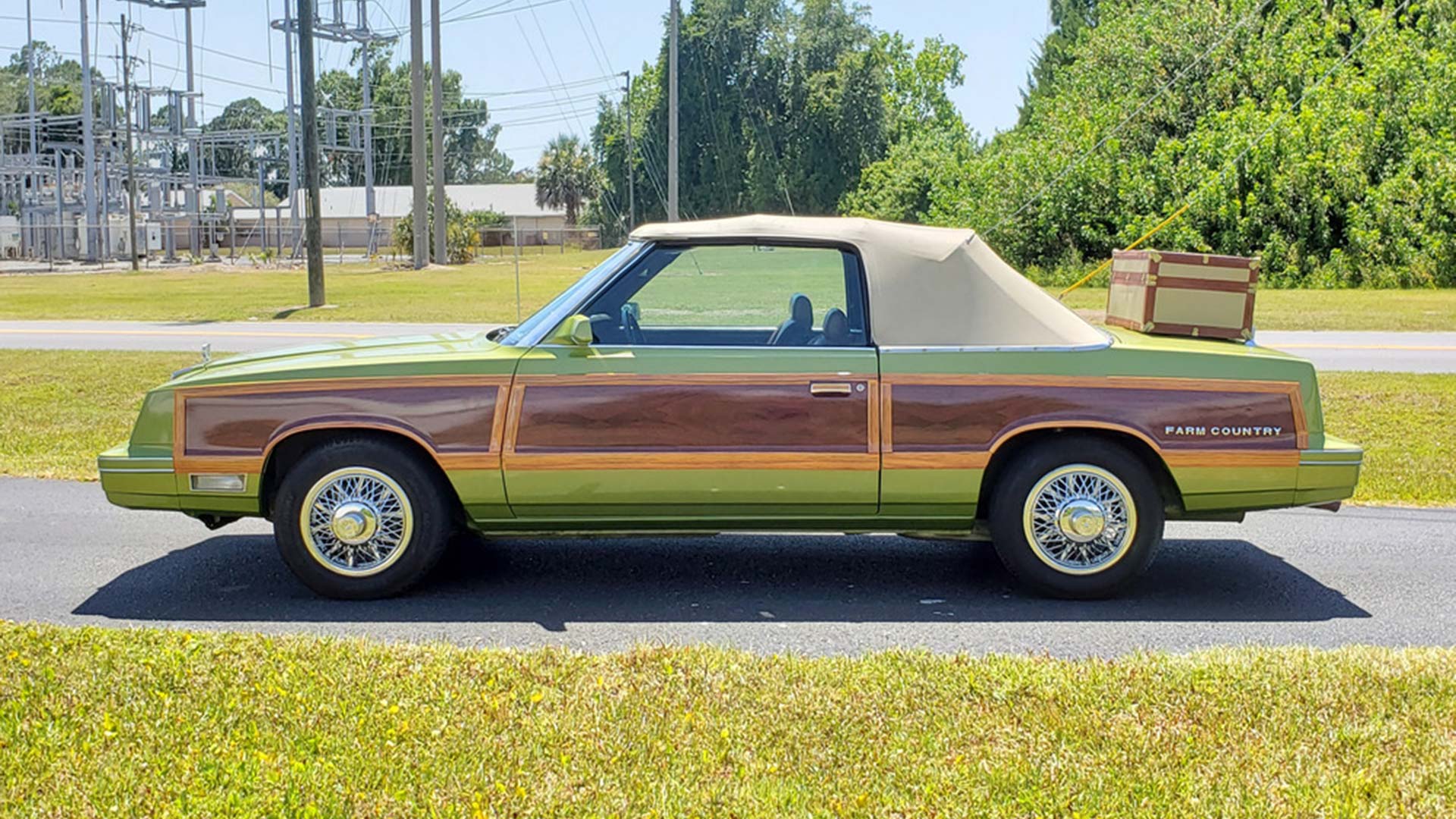 Although it may seem hard to believe today, Chrysler did genuinely produce a version of the second-generation LeBaron convertible wearing woodgrain exterior trim.

Branded as the Town & Country, this LeBaron woodie was meant to evoke memories of the classy timber-bodied Chryslers introduced immediately after World War II.

Sadly, the cars of the 1980s built upon the Chrysler K-body platform could never quite match the grandeur of the originals from four decades previous. They did prove to be rare, with fewer than 5,000 sold between 1982 and 1986. 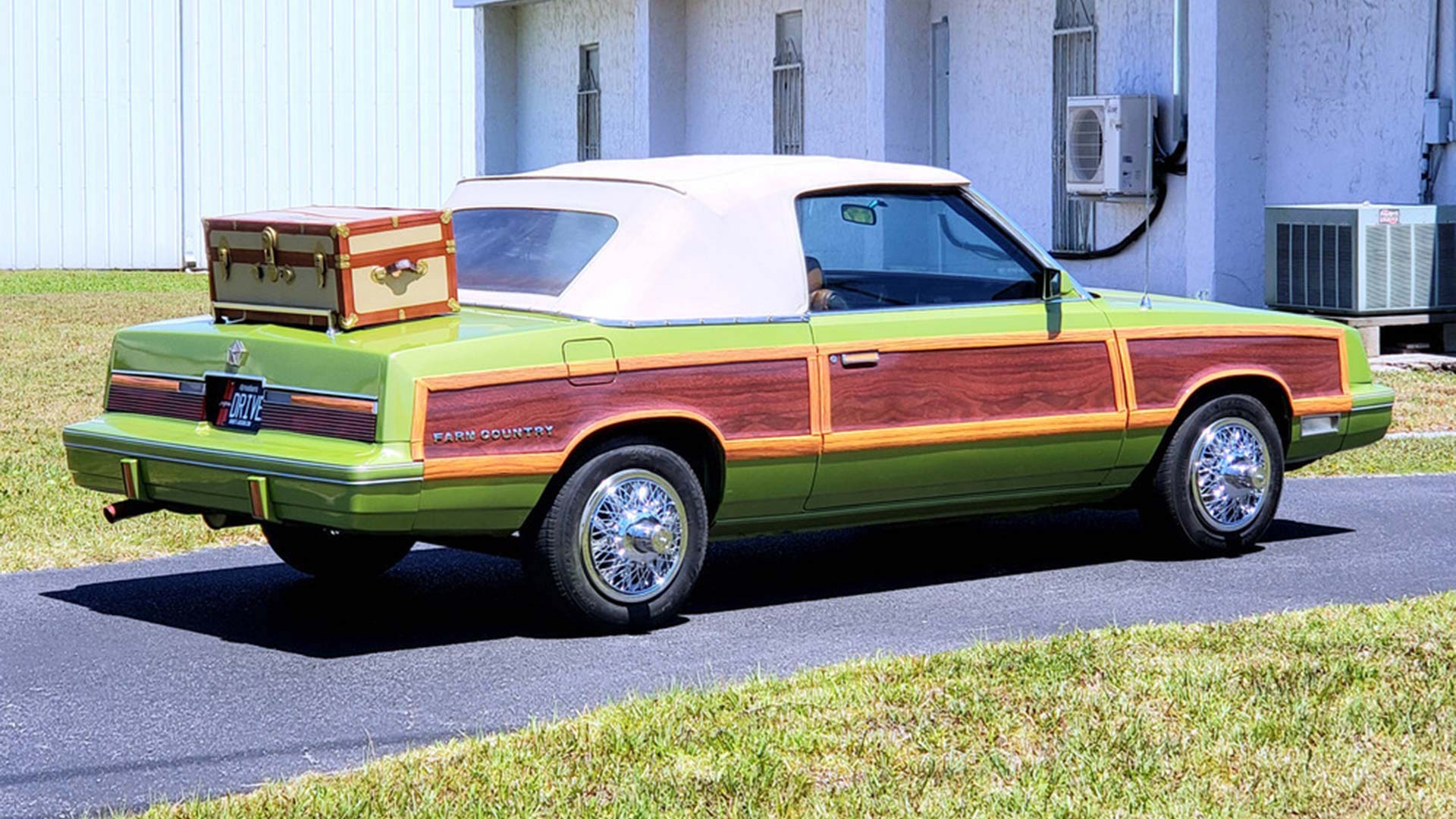 Like all K-body LeBarons, the Town & Country was front-wheel drive, and featured a range of four-cylinder engines.

This included a turbocharged 2.2-liter unit producing 148 horsepower, along with a 93 horsepower 2.6-liter Mitsubishi-sourced engine that was standard on Town & Country models.

Although they may appear unfashionable today, the K-body proved profitable at the time for Chrysler. In fact, the success of compact cars like the LeBaron is credited with keeping the company afloat during a difficult period.

“What the hell are you driving here?” 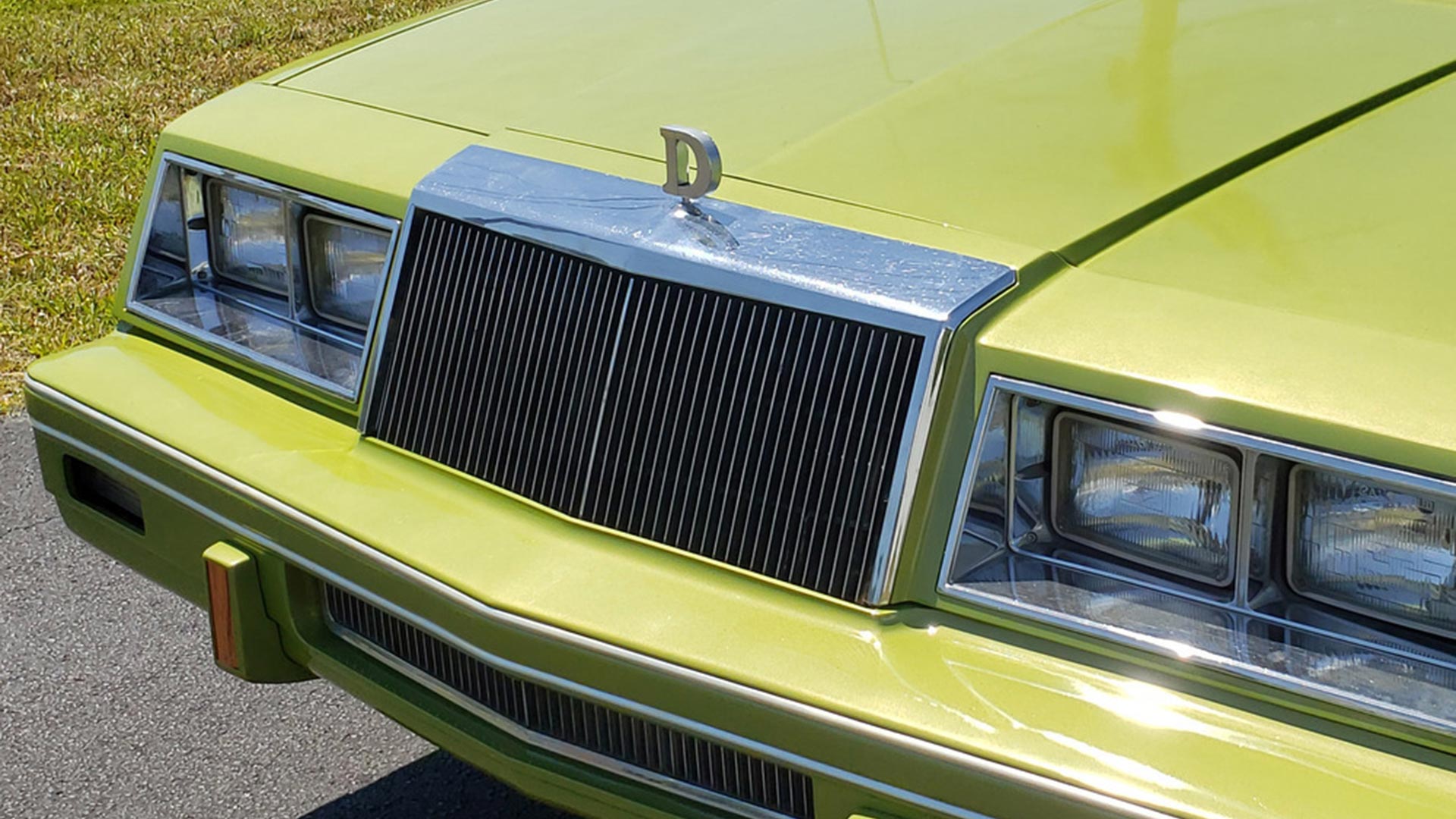 Despite this, John Hughes clearly saw the convertible woodie Town & Country LeBaron as the perfect comedy prop to use in Planes, Trains and Automobiles.

Hughes had the car rebadged as a fictional ‘Gran Detroit Farm and Country’, still making it obvious as to which real model he was poking fun at.

The pea green paintwork and wood trim also look to have been inspired by the star of a previous Hughes film – the Wagon Queen Family Truckster from National Lampoon’s Vacation. 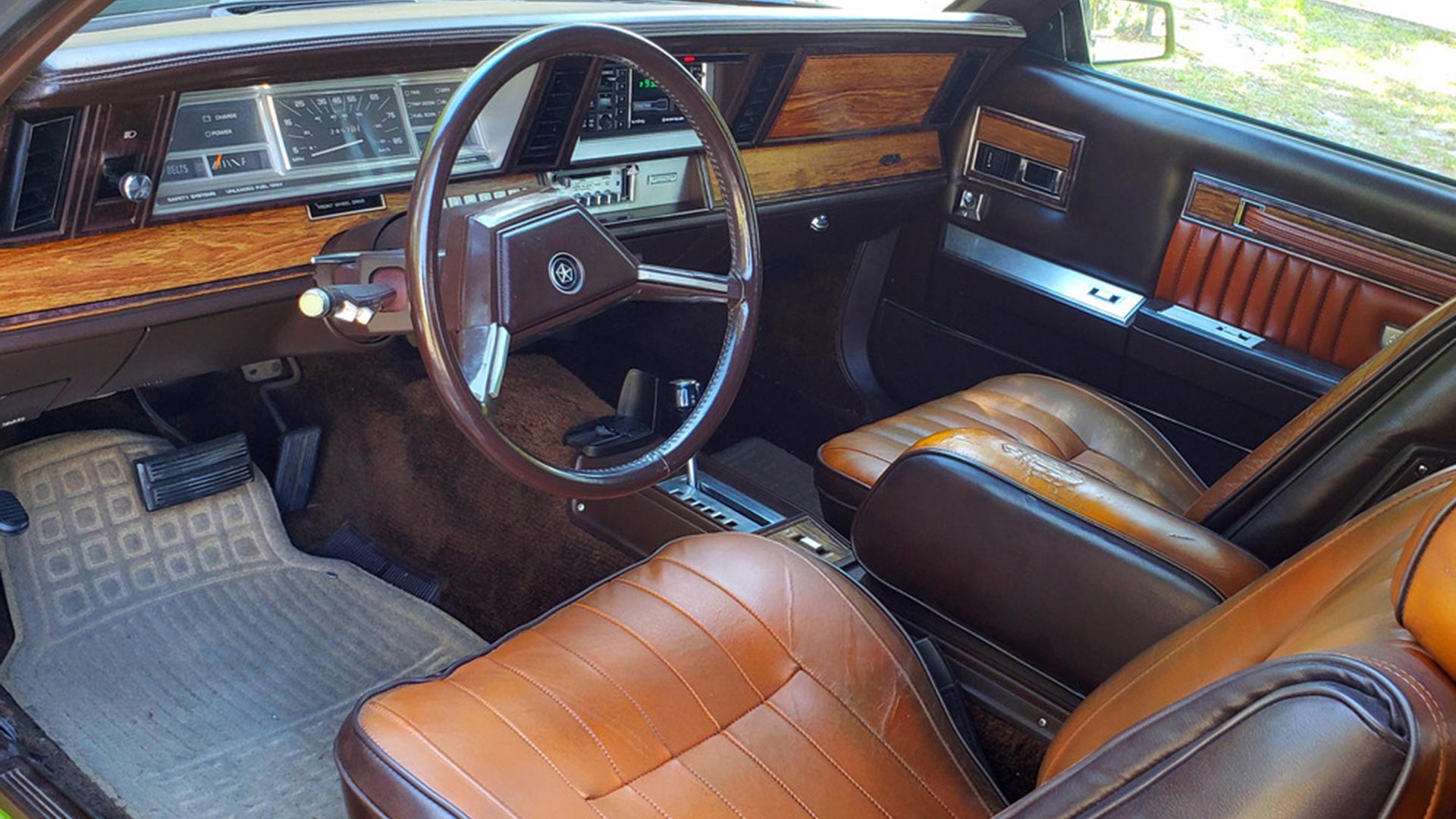 Although the car used in Planes, Trains and Automobiles suffers a number of disasters, including the interior being burnt out, this replica seems in good condition.

Inside is a lesson in fifty shades of brown, with differing hues used for the leather seats, woodgrain trim, and the rest of the interior components.

This recration is notable for its details, including the ‘Gran Detroit’ badge atop the hood, and even a suitcase with the details of John Candy’s character, Del Griffith, mounted on the rear luggage rack.

Power comes from the 2.6-liter engine, whilst this 1983 LeBaron has covered a total of just 82,446 miles from new. It even features the retro-tastic Texas Instruments Electronic Voice Alert system, plus working air conditioning. 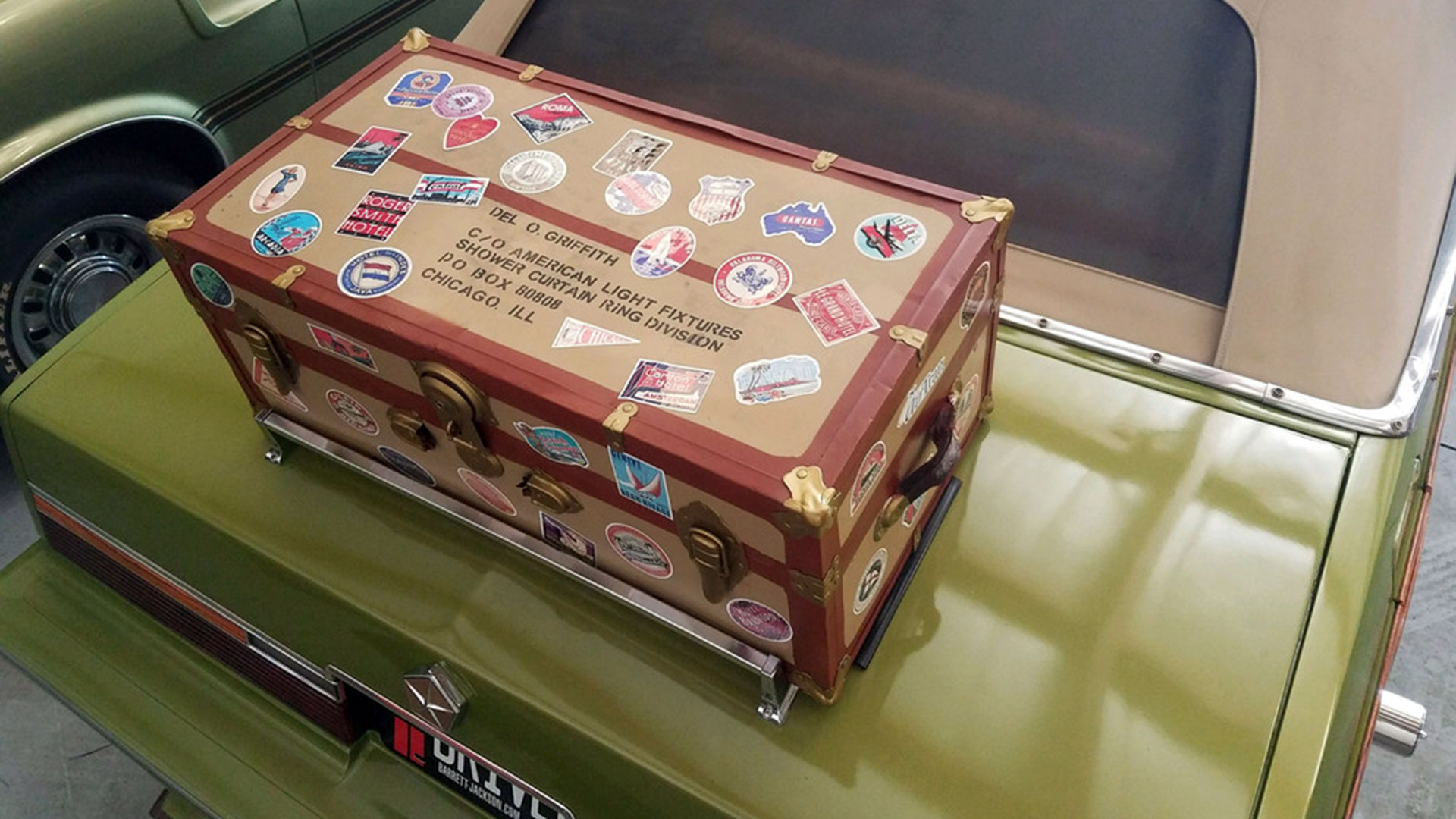 Compared to other movie replicas such as the recent Wagon Queen Family Truckster, or the endless Eleanor from Gone in 60 Seconds recreations, this is certainly a more niche prospect.

However, it will certainly suit the most ardent John Hughes fan, or someone who wants to add a rarer Chrysler to their Mopar collection.

Barrett-Jackson’s 2019 Northeast Auction will see some 500 collector cars cross the block, including the sale of the final C7 Chevrolet Corvette Z06 for charity.