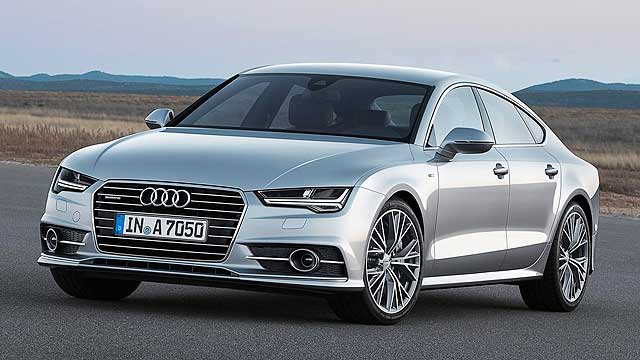 The Audi A7 Sportback facelift may be minor but there’s been some major work under the bonnet – including the development of a 3.0 TDI ultra model that’s capable of 60.1mpg and as little as 122g/km CO2.

It’s the eco star model in a forthcoming range of facelifted A7s, that will arrive in the UK towards the end of 2014: Audi assures us it has tweaked other areas of the car, but you’ll need more than a casual glance to pick them out.

For the record, changes include the adoption of the new hexagonal grille design, resculpted bumpers and trapezoidal tailpipes. The same Matrix LED headlights as on the latest A8 are also offered. Full LED headlights are now standard across the range.

The two TFSI and three TDI engines are all now Euro 6 compliant and that 60mpg ultra version is fitted with Audi’s latest 3.0-litre TDI clean diesel motor. It produces 118hp un ultra guise, but is capable of putting out up to 272hp.

Audi also offers the 3.0 TDI biturbo (have is finally decided on an official way of writing the name of its twin-turbo diesel?) that produces 320hp; meanwhile, the range-topping S7 petrol produces 450hp.

Inside, Audi’s upgraded to its latest modular infotainment system, with Nvidia graphics processor for the top-end system. 4G internet is also available.

Q4 2014 is the official on-sale target in the UK: prices will be announced nearer the time.