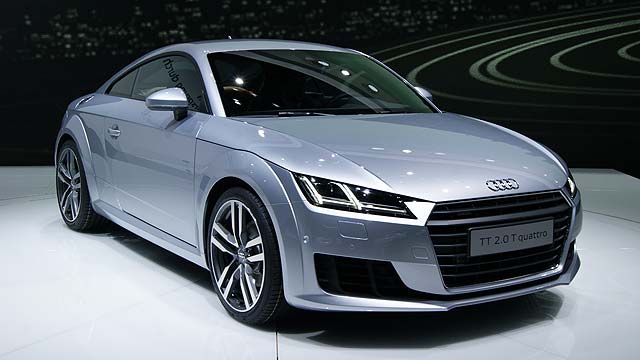 Audi has beaten supercar brands Ferrari, McLaren and Lamborghini to scoop the prize of most talked about car at this year’s Geneva Motor Show.

The new TT was the most mentioned model in both online news and blogs, commanding 6.04% and 4.36% of chatter respectively, reveals analysis by Kantar Media.

The next most talked about car was the Ferrari California T – just behind in online news, with 5.96% of mentions, but some way off in social media with 3% of mentions.

Social uses did generally prefer the premium, luxury and sports cars of the Geneva Motor Show. The Honda Civic Type-R Concept was their third favourite, beating the McLaren 650S and Lamborghini Huracan.

For more traditional online news outlets, though, it was the new wave of city cars that took their eye: their chatter about the new Peugeot 108 made it their forth favourite model, followed by the Renault Twingo and, further back, the Citroen C1 and Toyota Aygo (Peugeot won the first new-model battle of the joint venture trio, then…).

This was a trend noted by Kantar head of automotive insight Simon Hughes: the performance and luxury exhibits “were particularly popular on social media… it is interesting to contrast with the ‘small car show’ focus of journalists and bloggers.

“But whatever the trend, the key for manufacturers is to spot, in real time, what is being discussed online and analyse what it means for their brand.”

And what does it mean? Well, Kantar has produced an Infographic to explain all, which we’ve attached here. Who was right – social media or journalists and bloggers..?