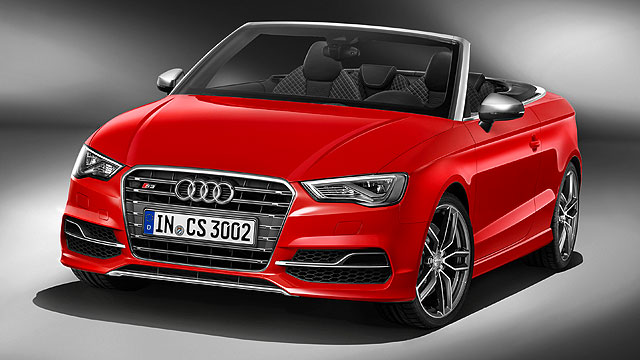 Audi has revealed the new S3 Cabriolet it’s taking to Geneva 2014, which swells the S3 range to a full FOUR variants.

The new S3 Cabriolet is the first ever open-top S3 and joins the existing three-door hatch, five-door Sportback and four-door saloon: no maker has ever offered such choice of compact performance machinery.

Like the other S3s, the new S3 Cabriolet produces 300hp from its 2.0-litre TFSI motor, and drives all four wheels through a standard S tronic six-speed transmission. This is good for 0-62mph in 5.4 seconds and a restricted top speed of 155mph.

The S3 Cabriolet weighs 1,620kg, which means it isn’t the lightest machine around, but 280lb ft of torque spread between 1,800-5,500rpm (no, that’s not a typo) should make relatively light work of it.

Unlike the other S3s though, this can’t crack the 40mpg barrier, just missing it with an average of 39.8mpg and 165g/km CO2.

But just like all other Audis, it’s a very rich and premium-look thing to behold. The polished chrome S detailing for the chrome singleframe grille with platinum inserts, aluminium strips on the windscreen frame and beltline, aluminum-capped door mirrors and edged sill trims all make it stand out in that nicely understated Audi S way. No bulging RS wheelarches here.

10 bodycolours are offered, including an S3 Cabriolet exclusive Panther Black crystal effect hue: complement it with a choice of three roof colours.

There’s more gleaming aluminium throughout the otherwise-black interior, plus dark grey S dials with white needles and, again, a fantastic little turbo boost pressure indicator. S sports seats are finished in Fine Nappa and if it’s all too sober, a red design pack livens things up.

In a nice bit of detail engineering, Audi has treated all leather trim with a special colour pigment that stops the surface getting too hot in direct sunlight.

Prices of Audi’s new superfast cabriolet are to be announced but they’d best be announced soon – ordering starts in April for first UK deliveries in July.