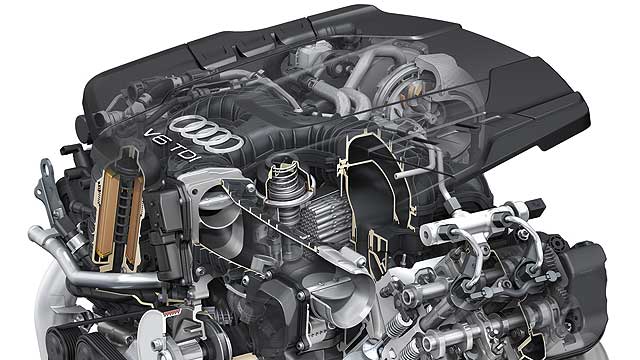 Audi has revealed a new generation 3.0-litre V6 diesel that both meets Euro 6 emissions standards and produces up to 272hp.

The new motor, which even in basic guise produces 218hp, is expected to roll out soon in the A6 and A7 range, before appearing in the new A4 due 2015.

New features include a new thermal management system: crankcase and the new-design cylinder heads have separate coolant loops. There are new turbos and variable-load oil pump, and there’s even a world first: Audi has combined NOx storage, diesel particulate filter and SCR injection into a single assembly.

Audi chairman Professor Rupert Stadler used the launch of the new engine to underline Audi’s commitment to diesel, saying they are a “central part of our technology mix for the mobility of tomorrow.”

The firm has been perfecting diesels for two decades now, yet still believes there is “potential for increasing efficiency in the future too.”

Technical boss Professor Dr. Ulrich Hackenberg was even bolder: “the new 3.0 TDI substantiates our claim as the leader in diesel technology.”