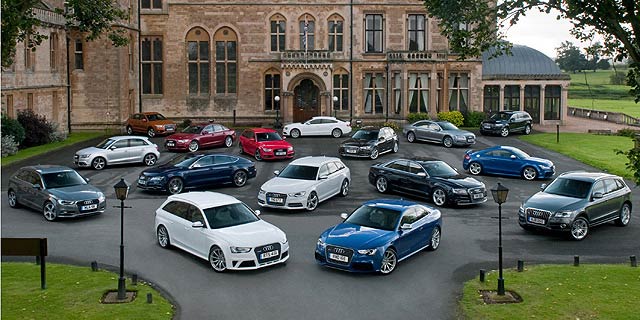 Year to date, there are two BMWs in the SMMT top 10 best selling cars list. There’s not a single Audi. So, in the battle of the premium brands, is the Ingolstadt firm miffed by this?

This illustrates the difference in approach between Audi and BMW – and why Audi’s strategy of multi-model launches over the years is, it argues, now bearing fruit.

“We don’t want one single car to dominate,” says UK PR manager David Ingram. “This would expose us to risk if that sector were to fall.

“Instead, we want as broad a product portfolio as possible, selling fewer examples of more cars.” Which is why its model range has grown from 17 cars to 47 cars in 12 years.

Ah, but most of them are derivatives, people argue. Fair enough, says PR director Jon Zammett: but we still have 23 distinct model lines…

The best-selling single Audi model line is the A3 Sportback, says Ingram, accounting for around 20 per cent of sales. The A3 Saloon has been introduced not to boost volume of the A3 further, but to balance demand across model lines and make sure that percentage doesn’t rise further.

Exclusivity is the key, he says. “A3 sales substitution is no bad thing…”

Which leaves Audi in a very desirable position, says Zammett. It doesn’t have plans to grow its UK volume much further, so can to an extent focus on getting the right people into its cars, not as many people as possible.

“Our price point is going up,” he says.  “We always want to sell one less car than demand calls for…”