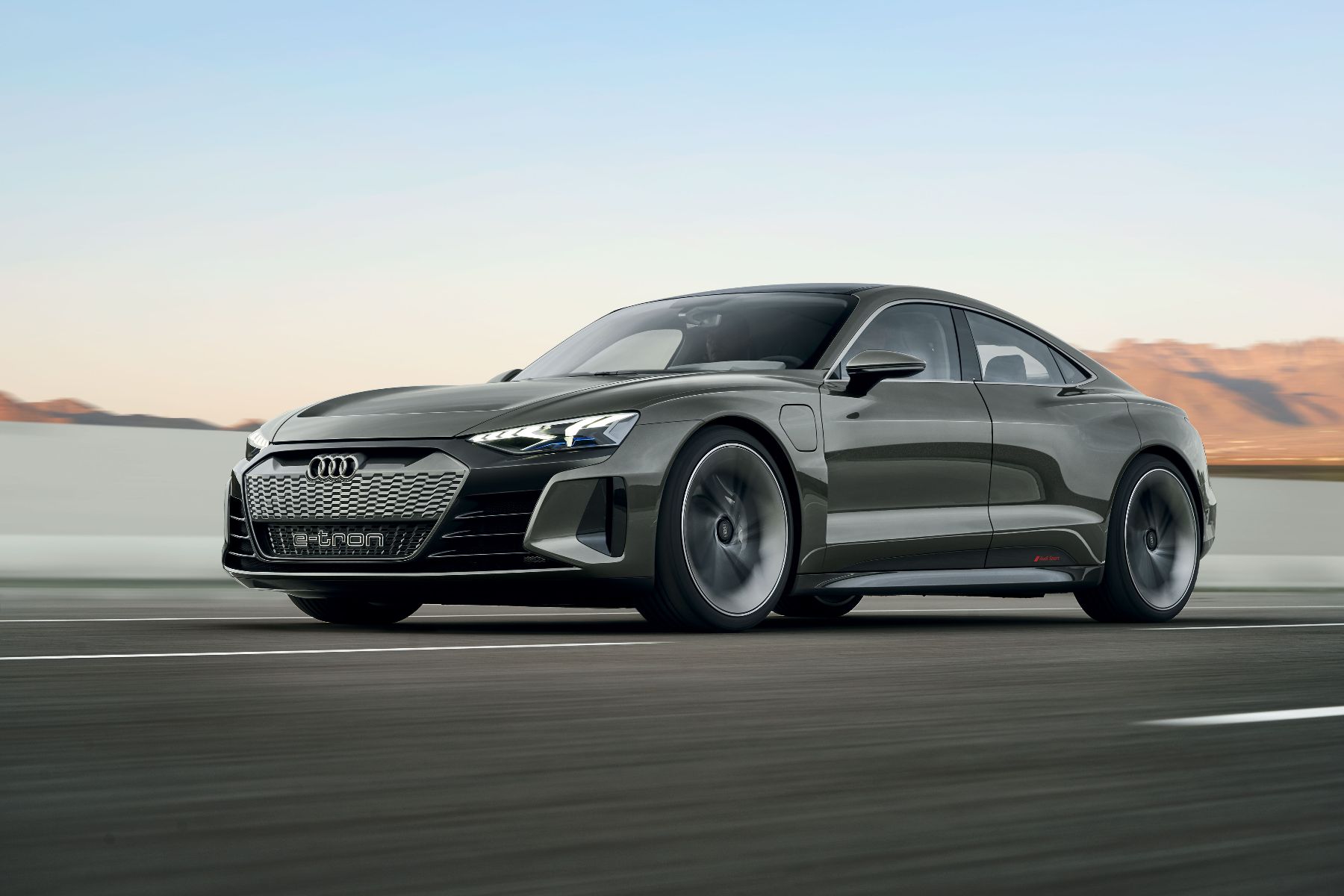 Audi’s response to Tesla hasn’t been swift, but if the new E-tron GT Concept – newly revealed at the LA Auto Show – is anything to go by, it will sure be aggressive.

Tesla’s groundbreaking Model S has been disrupting the upmarket EV sector for the better part of four years. Porsche’s response has been in the pipeline for three, but otherwise, the car industry establishment has stayed quiet. Finally, Audi is making some noise. 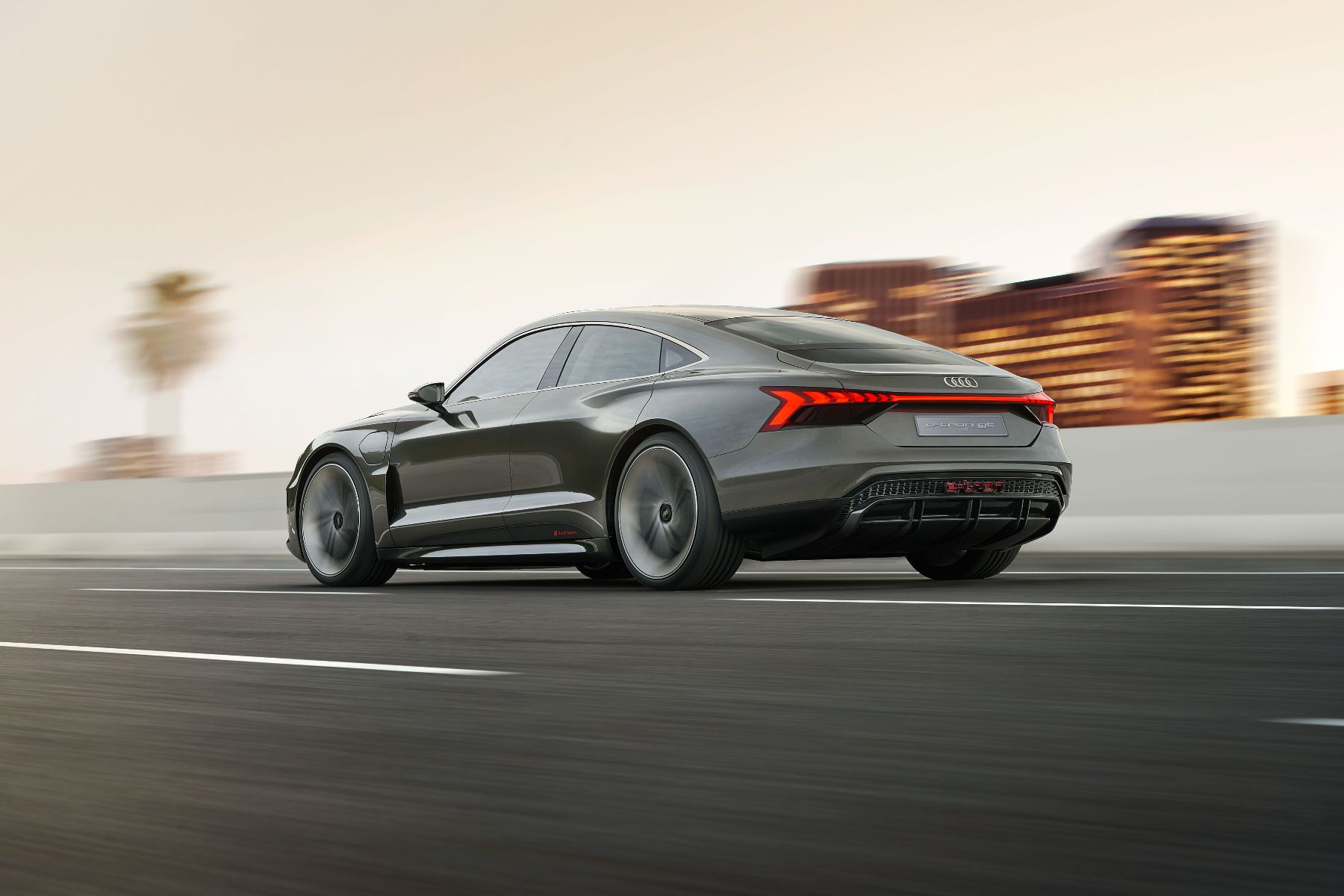 The E-tron GT has wide haunches, defined lines, a swept-back roof and a face so cool it could oust Jonny Depp from the Sauvage fragrance ad. There are plenty of references to the sportier side of Audi’s portfolio, combined with smooth touches designed to keep drag down. That trapezoidal grille won’t be scooping up quite as much air as an RS7, for example.

At the back, the roof sweeps down into a muscular rump with broad shoulders either side. There’s a lot of the R8 about the stance of this car. It comes complete with the requisite Audi light graphics, which were just made for moody Instagram shots. We spy quite an aggressive diffuser, too.

Based on its silhouette, you can tell there’s a family relation to the soon-to-be-revealed Porsche Taycan. Indeed, even Audi admits ‘the technology in this automobile was developed in collaboration with Porsche’. 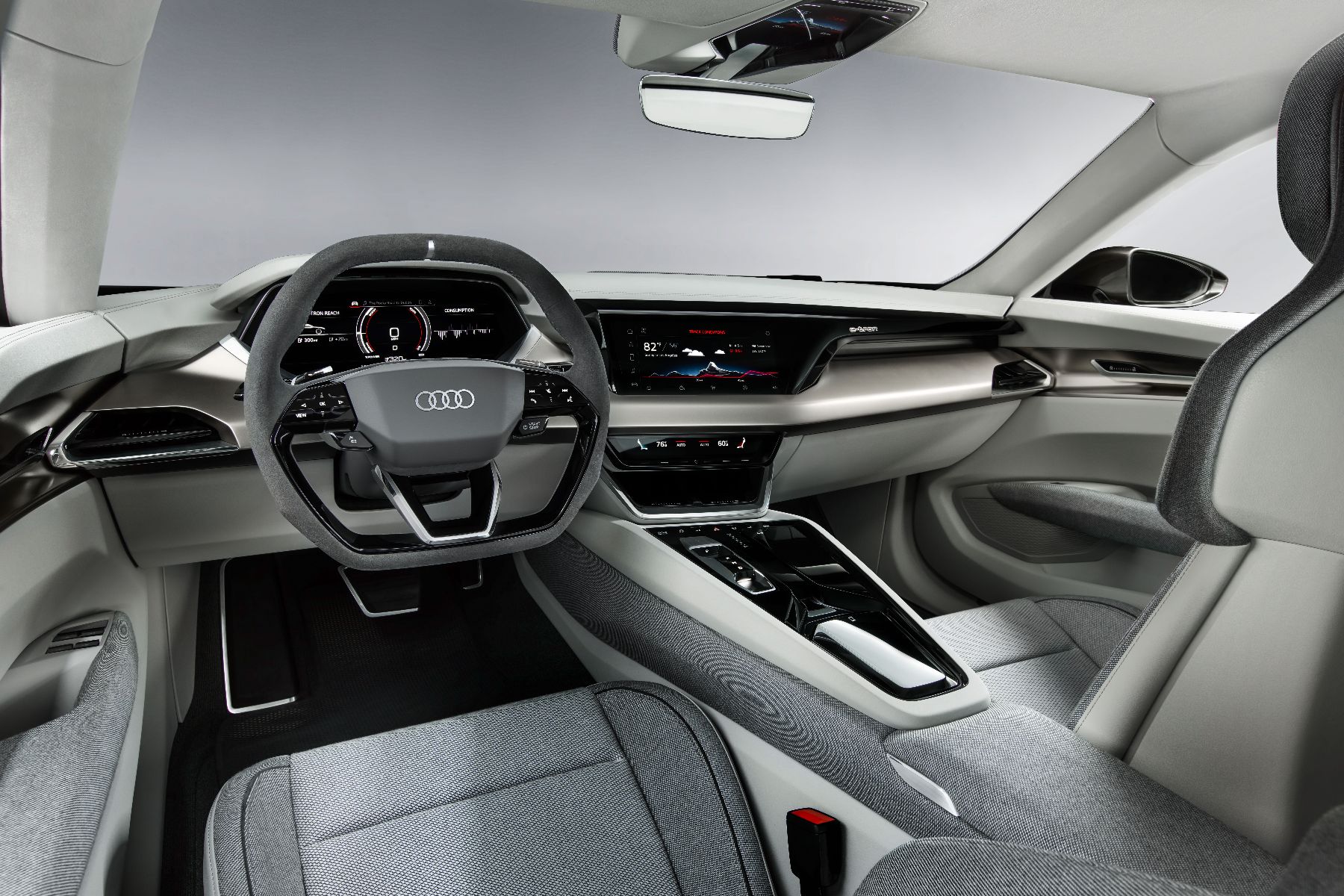 Inside, it’s pretty standard Audi fare, with a spruced-up version of the screen layout recently seen on Q8, A8, A7 and A6. The seats are a bit sporty, as you’d expect, and the graphics are jazzed up a bit. But there’s little here you’d be surprised to see in a showroom. Perhaps the interior materials made out of recycled fishing nets? Indeed, no animal-sourced materials are used in this eco-conscious super saloon.

A lithium-ion battery with ‘an energy content of more than 90 kWh’ spans the floor of the car between the wheels, giving the E-tron GT Concept a low centre of gravity ‘comparable with the Audi R8’. The 800-volt wired charging system means it can be at 80 percent charge in 20 minutes. That’s good for nearly 200 miles of driving range, versus 248 miles when fully juiced. That’s on the more realistic WLTP cycle, too. 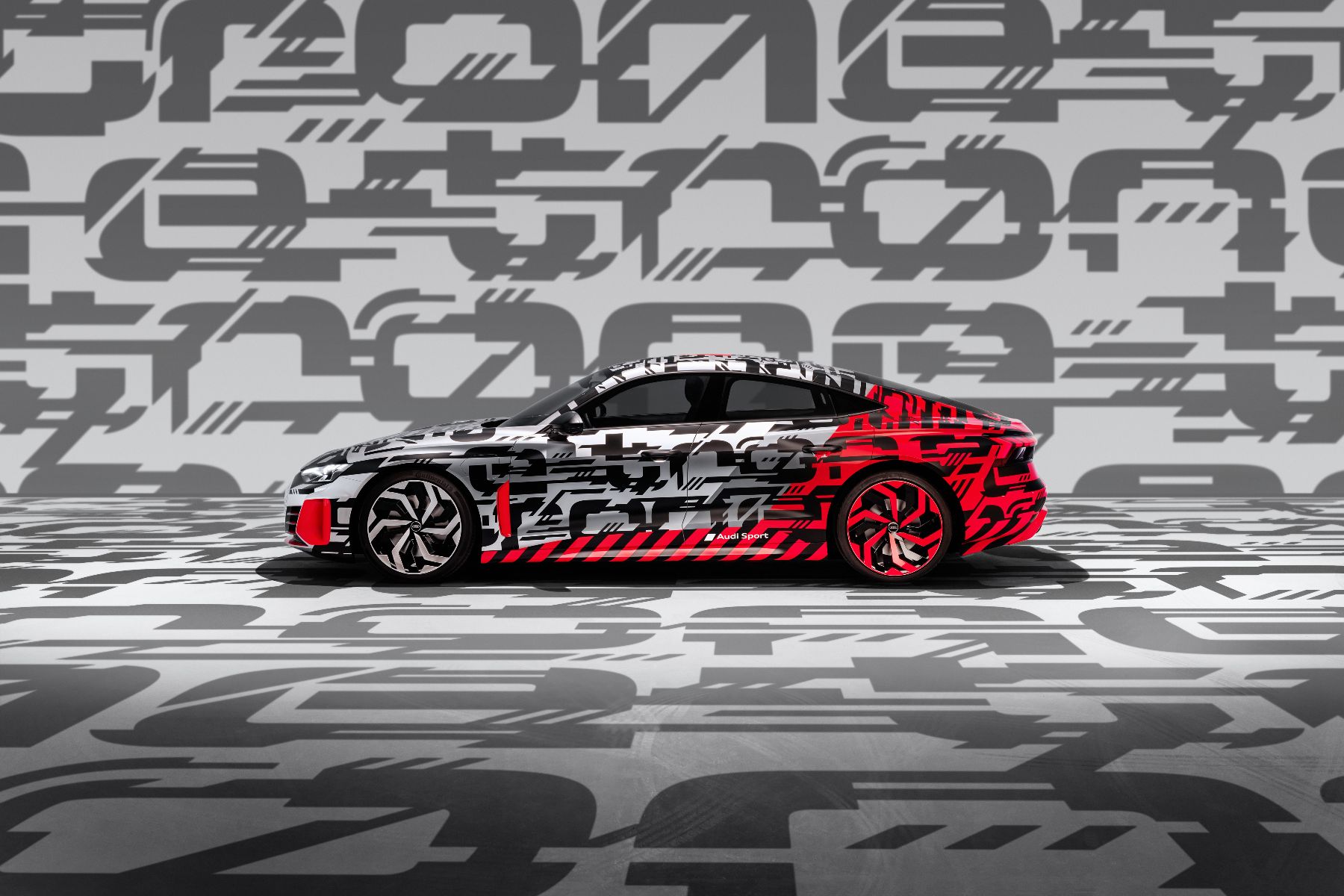 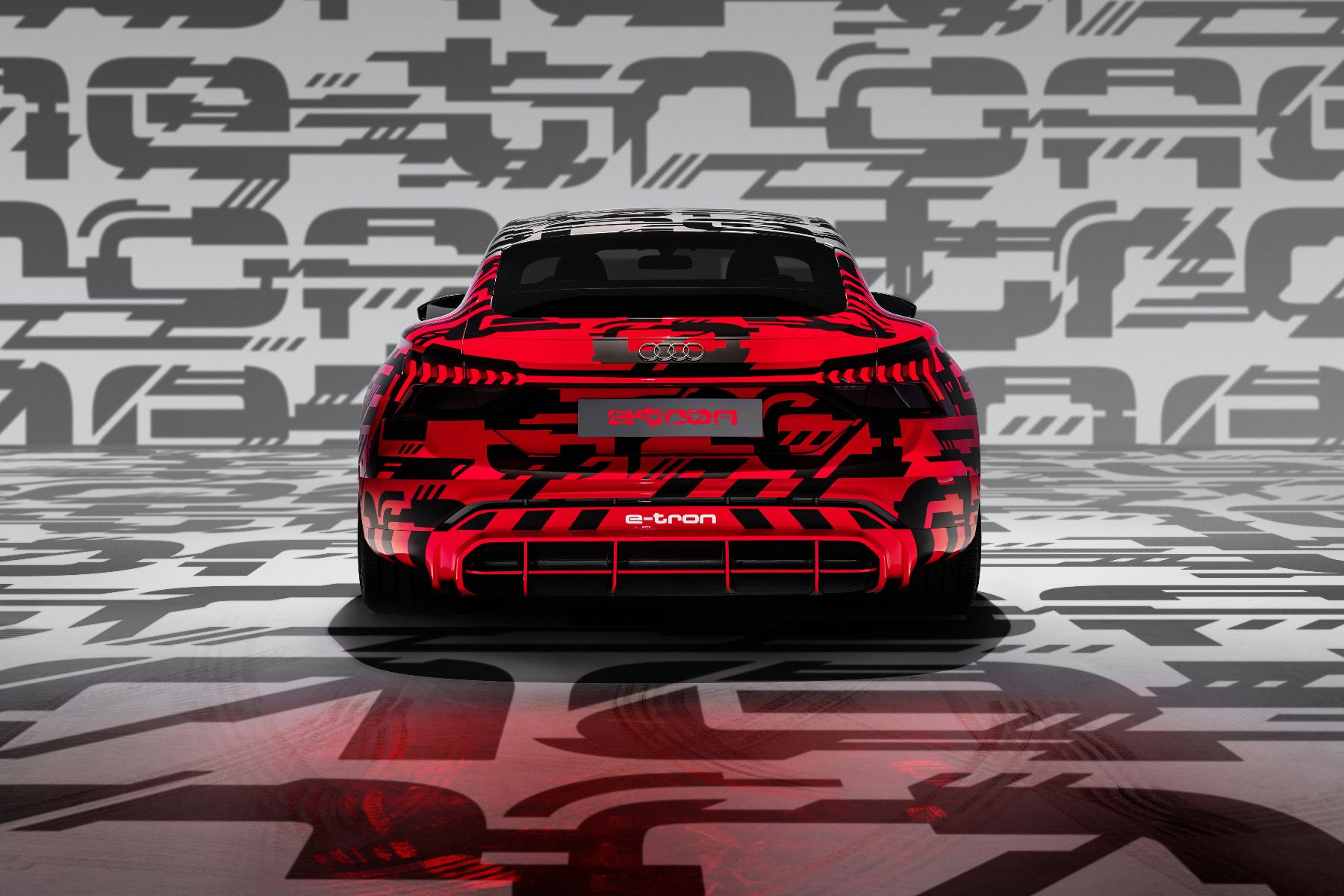 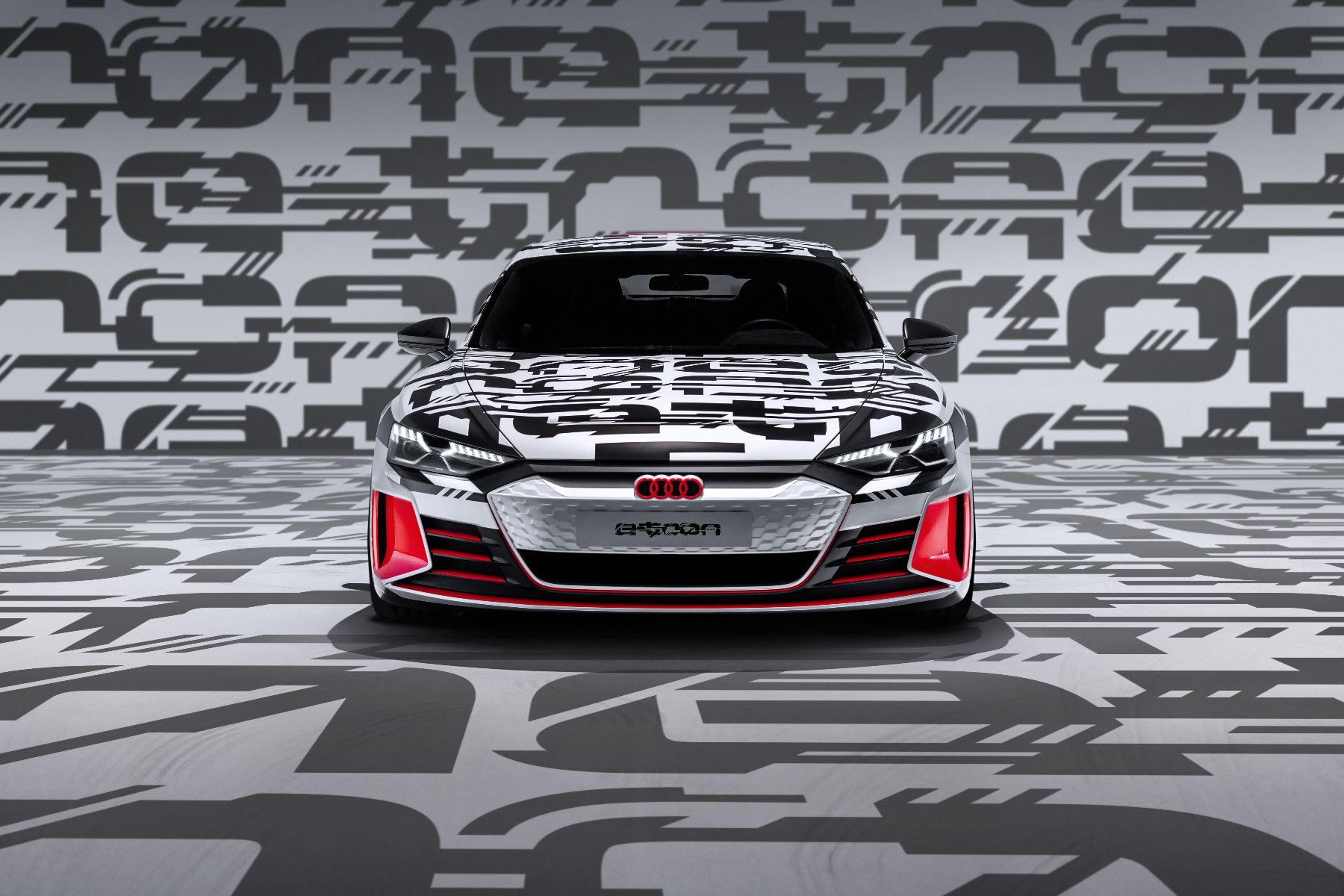 The 590hp Audi comes equipped with four-wheel steering for added agility. Power gets to the wheels via two electric motors – one for each axle. On the straights, it’ll reach 62mph in 3.5 seconds, before hitting 124mph in just over 12 seconds.

‘One feature that not all the competition can match is the option of fully utilising the drive’s acceleration potential several times in succession,’ says Audi. A fun dig at Tesla, we think. This longevity is down to the Audi’s sophisticated cooling system – and the Porsche Taycan can make similar claims. Interestingly, the top speed is pegged at 149mph to increase range. We wonder how far that would get it down the Autobahn.

This is Audi’s second all-electric model, after the E-tron electric crossover revealed at the Frankfurt Motor Show. Interestingly, that car features digital wing mirrors with cameras and screens, while the E-tron GT appears to stick with old-fashioned mirrors.

To all appearances, it looks almost production-ready. Expect the real thing in late 2020.