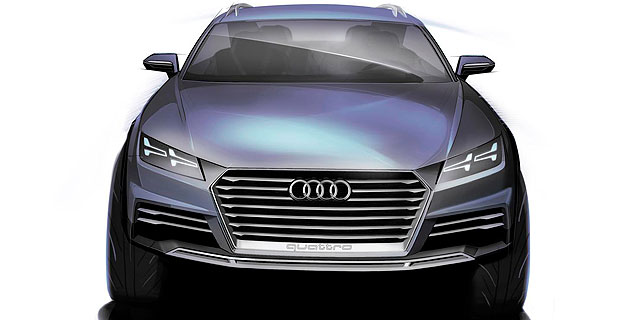 Audi has taken the unusual step of revealing a concept car… without actually revealing what it’s called.

The ‘show car’ will debut at the North American International Auto Show (aka Detroit) next month, and is described as ‘a compact sports car redefined’.

Redefined in the sense it is a compact sports car with SUV underpinnings, similar to the Audi nanuk shown at the Frankfurt Motor Show this year. Whereas the nanuk was supercar-derived, this is much smaller… the SUV TT compared to that model’s SUV R8 appearance.

It’s 4.2 metres long, so rather short, with Audi describing the rooline as Shooting Brake in profile. It previews another development of the Audi design language, focused this time on giving an allroad-style look.

The car with no name also has yet another development of the Singleframe grille (all one word and capitalised now, decrees Audi) and there are e-tron styling cues within, in the form of the ribs within it. Suggesting this concept’s going to carry some form of advanced drivetrain, surely.

Really, we’re not quite sure what it is, but feel it could be hinting at the design of the next Audi TT, while also testing the water for a possible sports SUV coupe crossover sister car. Which really would be quite something.

We’ll find out more in the build up to Detroit. Hopefully by then we’ll find out what it’s called, too. Any guesses?