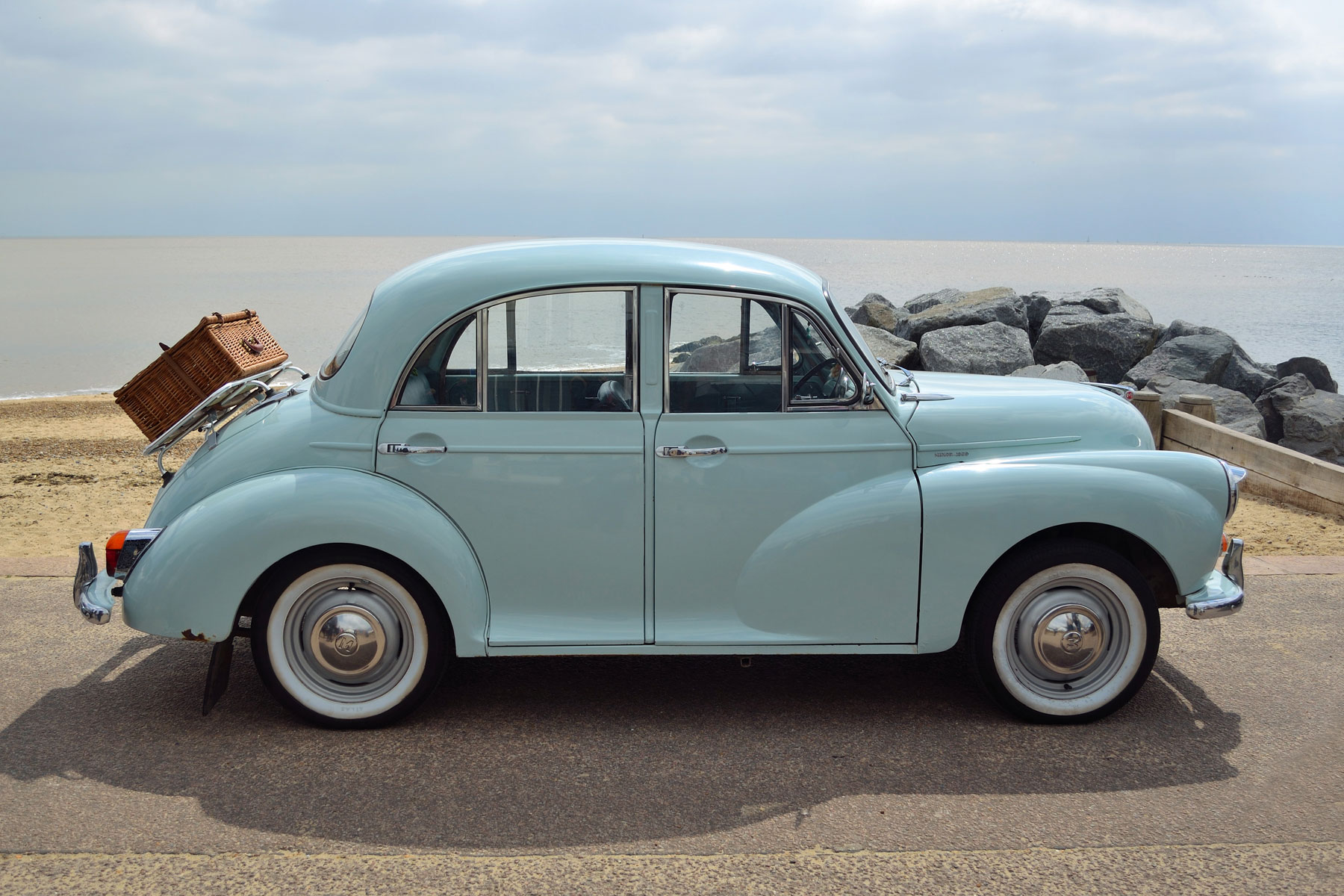 If ever a country was in need of some positivity, it was Britain in 1948. Still recovering from the Second World War, the British motor industry was like a junkie in search of a hit, desperate for someone or something to inject a little spice.

It got more than it could ever wish for. The Morris Minor and Jaguar XK120, both of which were unveiled at the 1948 British Motor Show, may have been polar opposites on the car industry spectrum, but they were like a double dose of adrenaline, consumed at precisely the right time.

The XK120’s legend would be built on speed, passion and sex appeal. The first car ever to exceed 100mph for seven days and seven nights, the first car ever to win an Alpine Gold Cup, the fastest production sports car in the world – with headlines like these, the Jaguar adman probably spent more time on the golf course than he did in front of a typewriter.

That embarrassing moment you come dressed as a Morris Minor. Or is it as a Singer. #HeadHurts #Kelsall pic.twitter.com/ytrGYkeaXg

But for all of the Jaguar’s pace and glamour, it would be the Morris Minor that would touch the lives of more British people and set Alec Issigonis on the path towards designing another automotive icon: the Mini. In the meantime, the Morris had a decade to perform a Minor miracle.

It’s as British as a Victoria sponge, a village fete and moaning about the weather, but the Morris Minor was designed by the Smyrna-born son of Greek and German parents, with styling that was more transatlantic than what we’d expect from a project planned in Cowley. Today, the Minor might look as traditional as a postbox and a bowler hat, but it was more radical in 1948.

Development work began in the early 40s under the project name Mosquito, a reference to the de Havilland combat aircraft flown during the Second World War. The first functional prototype looked remarkably similar to the production Minor, but the flat-four engine, three-speed gearbox and column gear change didn’t make the cut.

Neither did the name, with Morris bosses worried that the Mosquito might deter conservative buyers. The Minor name felt more traditional, more in keeping with the buttoned-up and skirts-below-the-knees mood of the era. A touch of the schoolmaster, perhaps, referencing a pillar of society. Ford’s ageing rival was called the Prefect, after all. 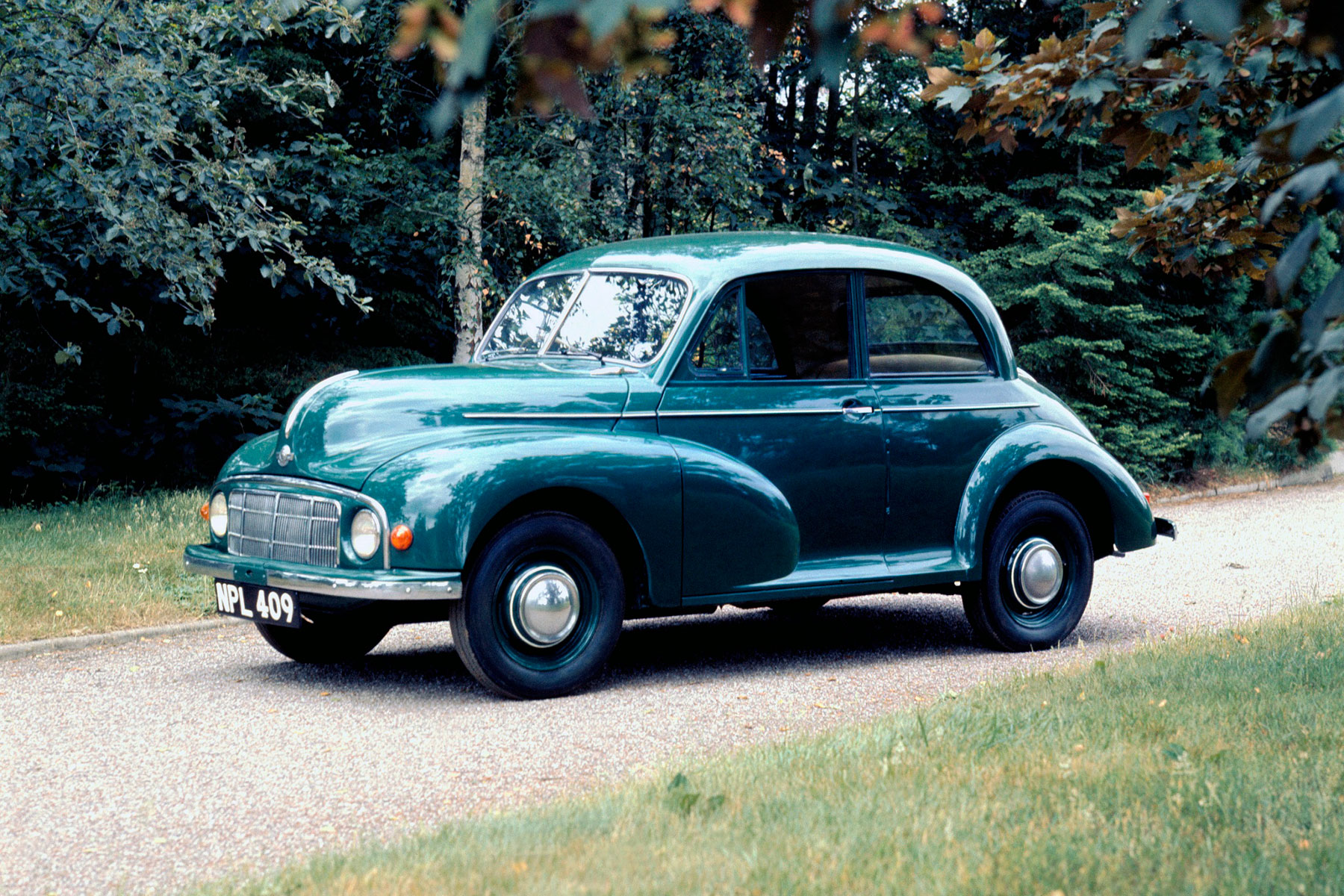 “Thoroughly tested, new from radiator badge to rear bumper, the Morris Minor brings motoring perfection within reach by satisfying your ideas and your pocket,” proclaimed the press ads, emphasising the innovation beneath that warm and homely exterior.

Independent front suspension, rack and pinion steering and longitudinally mounted rear leaf springs were lifted from the Mosquito and hinted at a new era of car design, although the 917cc side-valve engine was straight out of the 1930s and felt out of touch with the Minor’s vision of the future.

But in just about every other respect, the Minor felt new and exciting. A unitary body, Lockheed hydraulic brakes, a four-speed gearbox and cleverly-positioned 14-inch wheels designed to reduce cabin intrusion were just part of the package. “The world’s supreme small car,” declared Morris, in a claim that wasn’t entirely unjustified.

Even the woeful performance could be forgiven, because the Minor set new standards for road-holding and handling, enabling it to cover ground as quickly as more powerful vehicles. The top speed may have been a lowly 60mph – it would also take 35 seconds to hit 50mph – but once up to speed, the Minor was almost untouchable.

From MM to Series II

The Series MM – as the ‘Mk1’ was known – was available for just £358 at launch, a remarkably low price given the fact that the pre-war Ford Anglia was only £48 cheaper. That’s about £12,500 in today’s money or less than the price of a new Ford Fiesta.

A convertible version – known as the Minor Tourer – was available from the outset, before a four-door Minor joined the range in October 1950. At the same time, an interior heater was added as an option, along with improved paint and an engine oil filter as standard.

More importantly, the four-door model also introduced the new raised lights, which had been standard on every Minor exported to America since 1949. It would be a while before the raised headlights became standard equipment in the UK.

It wasn’t cheap. At £569, the four-door Minor was far more expensive than the two-door and Tourer (£383), although this more extravagant price was in part justified by the more lavish specification. An interior light, ashtrays, front door straps and twin windscreen wipers represented the height of luxury for the Minor driver.

The Series II Minor arrived in July 1952, first as an export model, then standard in 1953 when the MM was phased out. The old Morris Eight engine was pensioned off and replaced by the 803cc engine from the Austin A30, a development made possible by the Austin/Morris merger.

The engine, with its SU carburettor, was a significant improvement, but any performance gains were negated by the weight of the Minor. Little else changed, aside from the M motif on the bonnet. 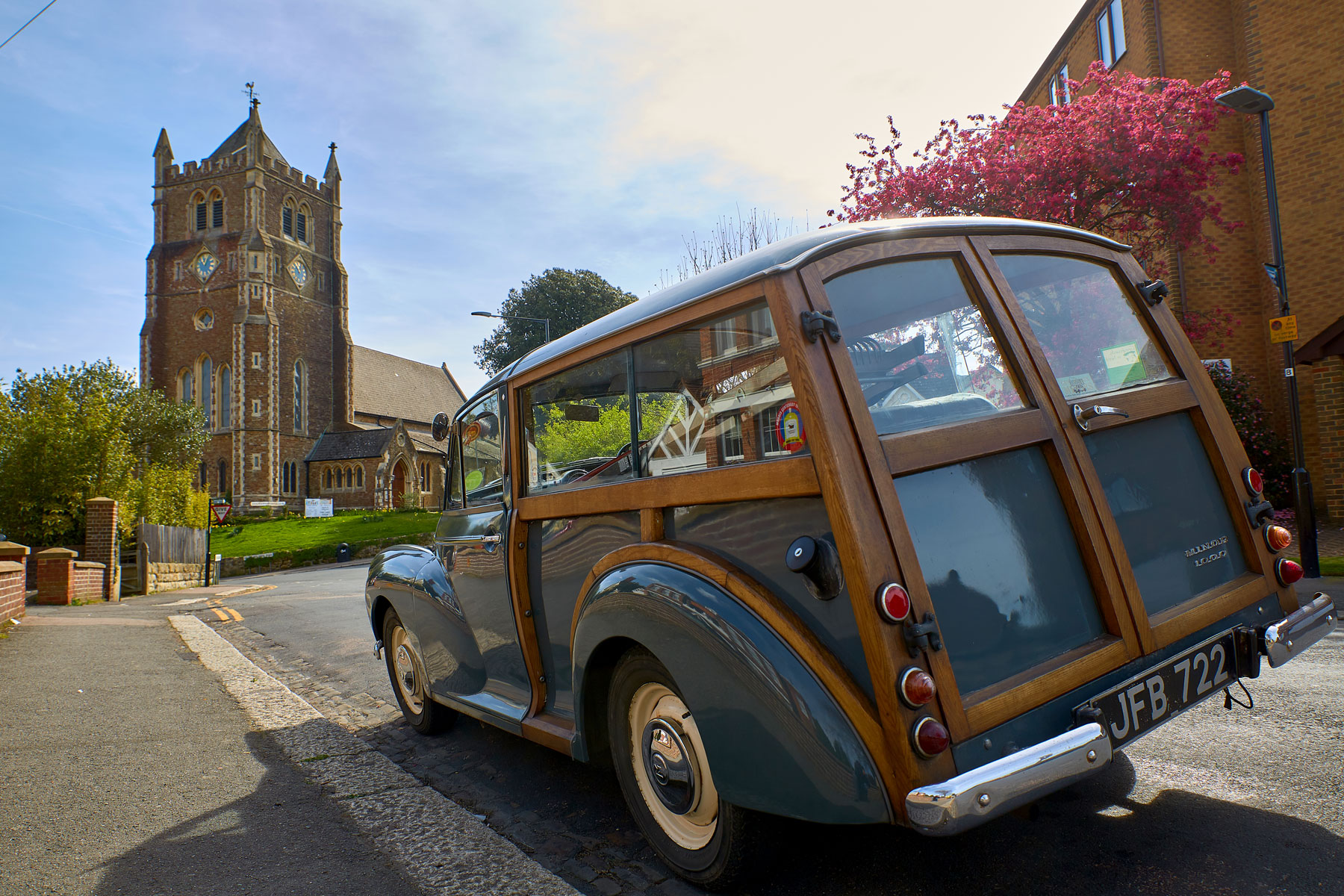 Also in 1953, Morris launched the ash-framed Minor Traveller, one of the most quintessentially British estate cars ever built. The Traveller conjures up images of picnic rugs, bunting, West Highland Terriers, WI meetings and National Trust stickers. If the Traveller were a television show, it would be Heartbeat. If it were a hymn, it would be Jerusalem.

In standard guise, the Traveller, with its side-hinged rear doors, cost £599, with the De Luxe adding £23 to the price tag. For that, motorists were treated to a heater, passenger sun visor, leather seat facings and bumper over-riders. Soon, the saloon and Tourer could be upgraded to the space spec for the same price.

From then, the Minor was subjected to a period of continuous development, ensuring it would live on way beyond its sell-by date. For example, there were new seats in 1954, along with a new grille and a re-styled facia.

But the big news came in 1956 when the Minor was finally treated to the engine its handling deserved. The Minor 1000 was powered by a 948cc development of the BMC A-series unit, enabling it to hit speeds over 70mph.

At the same time, Morris introduced a deeper and wider one-piece windscreen (although curiously the original wipers were left untouched), along with a larger rear window, new rear wings and a dished steering wheel. Sales increased in 1957 before softer rear springs were introduced in 1958.

Meanwhile, on the other side of the Atlantic, the Minor was still holding its own, more than a decade after its Earls Court debut. Indeed, US sales peaked in 1959, with just under 15,000 Minors finding a home in the year BMC launched the Mini. Incidentally, the 100,000th export vehicle rolled off the production line back in 1950.

By now, the Morris Minor was feeling outmoded, out of touch and out of time. Its styling, once futuristic and radical, was looking unfashionable, while its lack of luggage and cabin space was becoming less forgivable. Time to call time on the Minor?

Not a bit of it. The Minor had worked its way into British culture and society by virtue of its rear-wheel-drive characteristics, unyielding charm and fix-on-the-driveway simplicity. It was as comforting as a mother’s cuddle and as welcoming as a pot of tea. Against all the odds, the Minor would live on through the Swinging Sixties.

In December 1960, the Minor became the first British car to sell a million, with Morris celebrating with a Minor 1000000 special edition. With its lilac paintwork and white upholstery, it looked like the automotive equivalent of Carnaby Street. If Mary Quant designed cars…

Development continued, with a 1098cc engine added in 1962, decent wipers in 1962 and an optional fresh air heater in 1963. Sadly, a host of changes in 1965 included the replacement of the dished steering wheel, although a self-supporting boot lid was a long overdue ‘upgrade’.

But there was no getting away from the fact that the Minor was living on borrowed time and, with little thought for sentiment or nostalgia, the formation of British Leyland signalled the end for the much-loved car. The Tourer went in 1969, then the two- and four-door in 1970, with the Traveller, van and pick-up holding on until 1971.

It lived through two entire decades, bookended by the 40s and 70s, during which time some 1.6 million units, including 300,000 commercial vehicles, rolled out of the factory. Since then, it has become a British institution, both as a starter classic and a car for every occasion. Weddings, proms and even funerals – the Morris Minor has been there, done that.

It harks back to a more innocent time. Of a Britain before Brexit, the EU and the Americanisation of British culture. Of rolling hills un-blighted by plans for HS2 and when footballers resembled Subbuteo men. Of Nurse Gladys Emmanuel and pale blue and white panda cars making proper ‘nee-nah’ sounds.

Regardless of your views on British history and the state of the nation, a combination of great design, palsy-walsy styling, outstanding value for money and surprisingly good dynamics combine to create a national treasure.