Look closely – it's bolder than you first think. And the interior seems amazing... 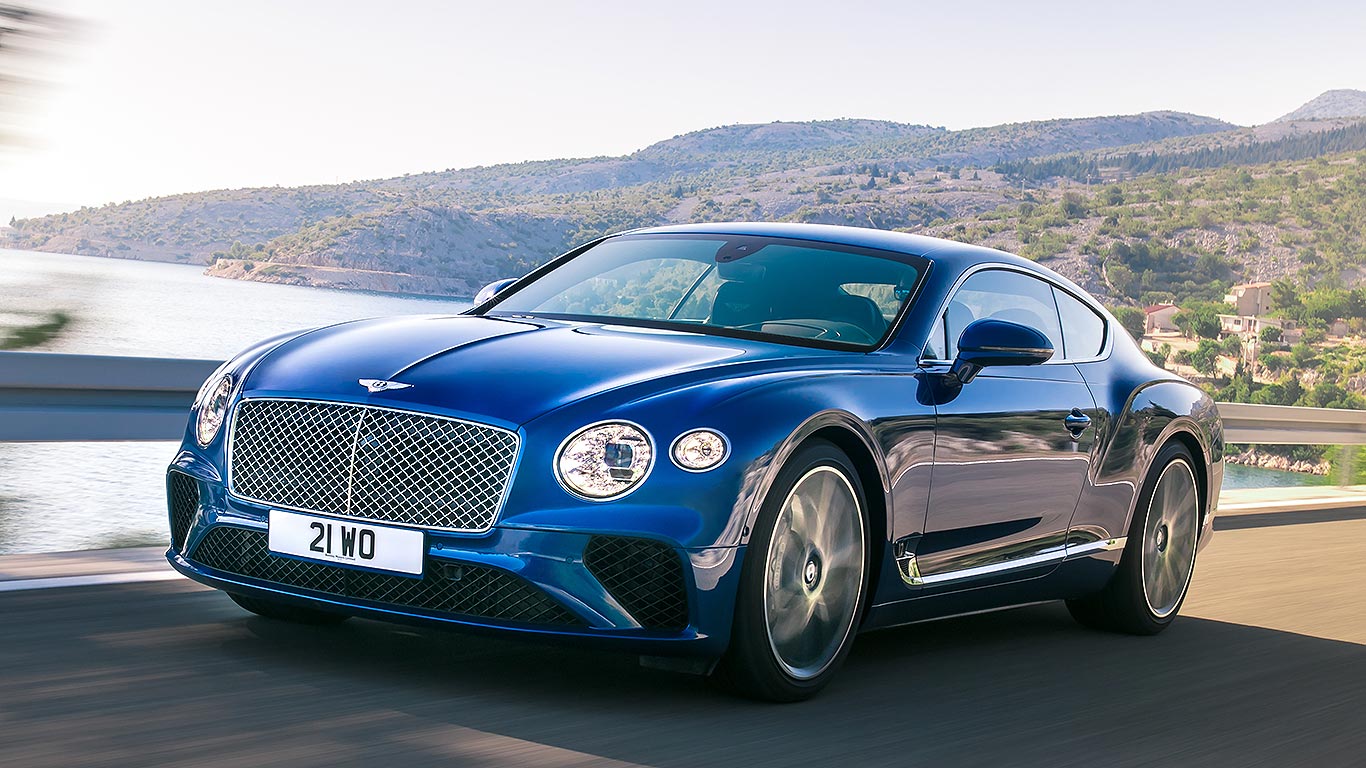 The new Continental GT will make its world debut at the 2017 Frankfurt Motor Show next month, where Bentley chairman and chief executive Wolfgang Durheimer will showcase what he says is “the pinnacle of our design and engineering achievements. 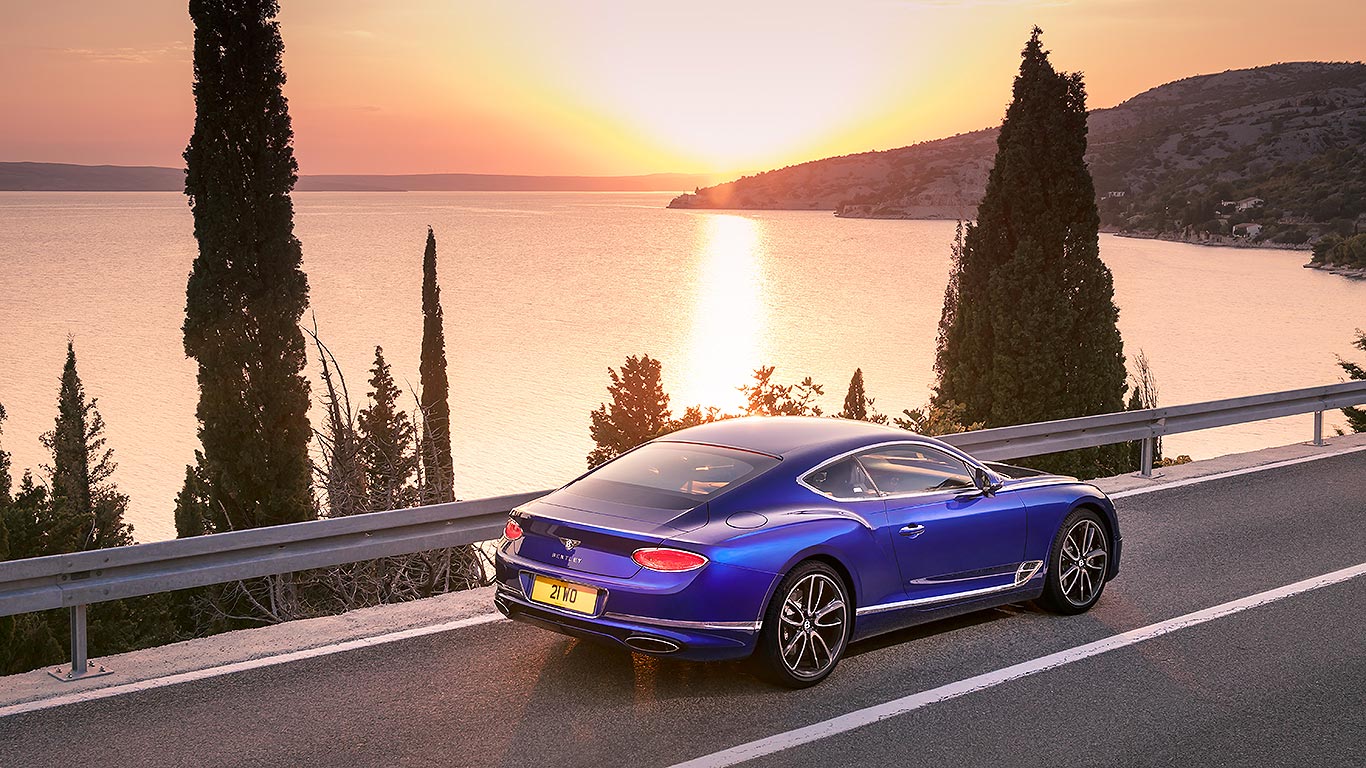 “We are the world leader in luxury mobility… the new Continental GT encapsulates our desire to innovate as well as celebrate our heritage and take the Bentley ownership experience to the next, unparalleled level.” Be in no doubt, the firm is heralding this as the definitive luxury GT car.

It has four more spacious seats and a bigger boot for “genuine real-world usability”, while “unrivalled” attention to detail delivers a properly posh cabin that’s “tailored specifically to the modern luxury customer”. And there’s no better showcase of this than the Bentley Rotating Display.

On one side, it has more of the wood veneer Bentley’s wood shop does so well. One smooth electronic rotation later, it has three watch-like analogue dials. Another whirr, and a lush, rich 12.3-inch touchscreen is yours to savour. Interior theatrics: Bentley’s got them nailed. And that’s not all… 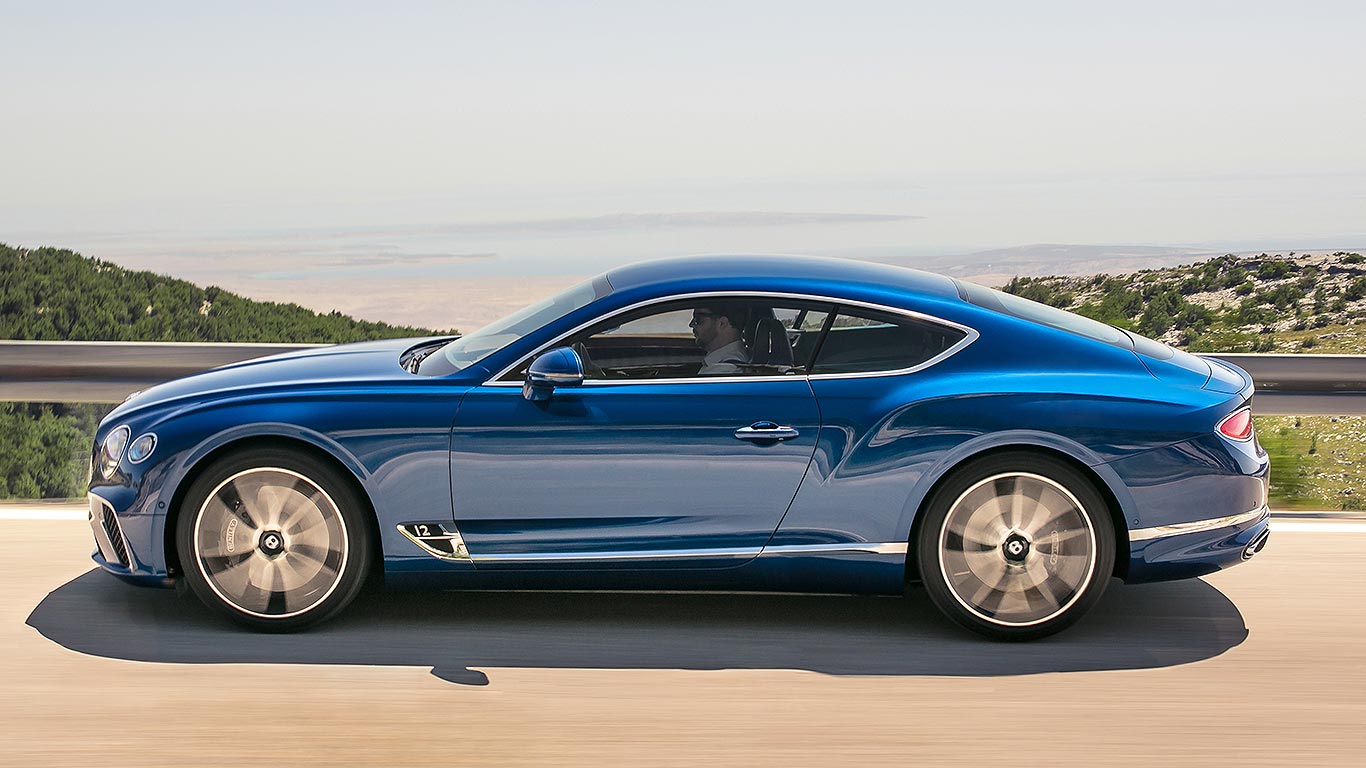 The new Continental GT is a clear evolution of today’s model, but one given more of a contemporary reinterpretation than we perhaps expected (more than you’d get between generations of Porsche 911, for example). It’s clearly still the familiar Bentley luxo-GT so many know and love but, the more you look, the more you realise how much it’s been modernised and optimised.

The front wheels are 135mm further forward, allowing Bentley to stretch the bonnet and lower the nose. It’s thus different in profile to the original, but still decidedly Conti GT: just follow the power line from the twin round headlights right across to the tight, muscular rear haunch for evidence of that.

The biggest styling evolution comes at the rear, where there are now ellipse-shaped tail lamps. They mimic the exhausts below, says Bentley: they also mimic the delicious EXP10 Speed 6 of recent years. Indeed, so too does much of the Conti GT’s newfound muscularity and sharp sculpting. Here’s hoping it still leaves room in the range for a Speed 6 itself…

Bentley’s also seriously proud of the new car’s LED Matrix headlights. All the internals are transparent, like “the finest cut-crystal glasses… with sharply defined edges that catch the light like a diamond”. It makes them look, says Bentley, like an illuminated gem: there’s even a welcome sequence that gently illuminates the headlights as you approach (although oddly, it’s a cost-option…).

Colours? Choose from 17, which apparently leads the luxury GT class for choice, and there’s another 15-colour portfolio for interior leather and carpets. What’s more, a number of launch cars will be offered in a further, limited, range of colours – but if you’re rich enough, a fully bespoke colour matching service is also offered. 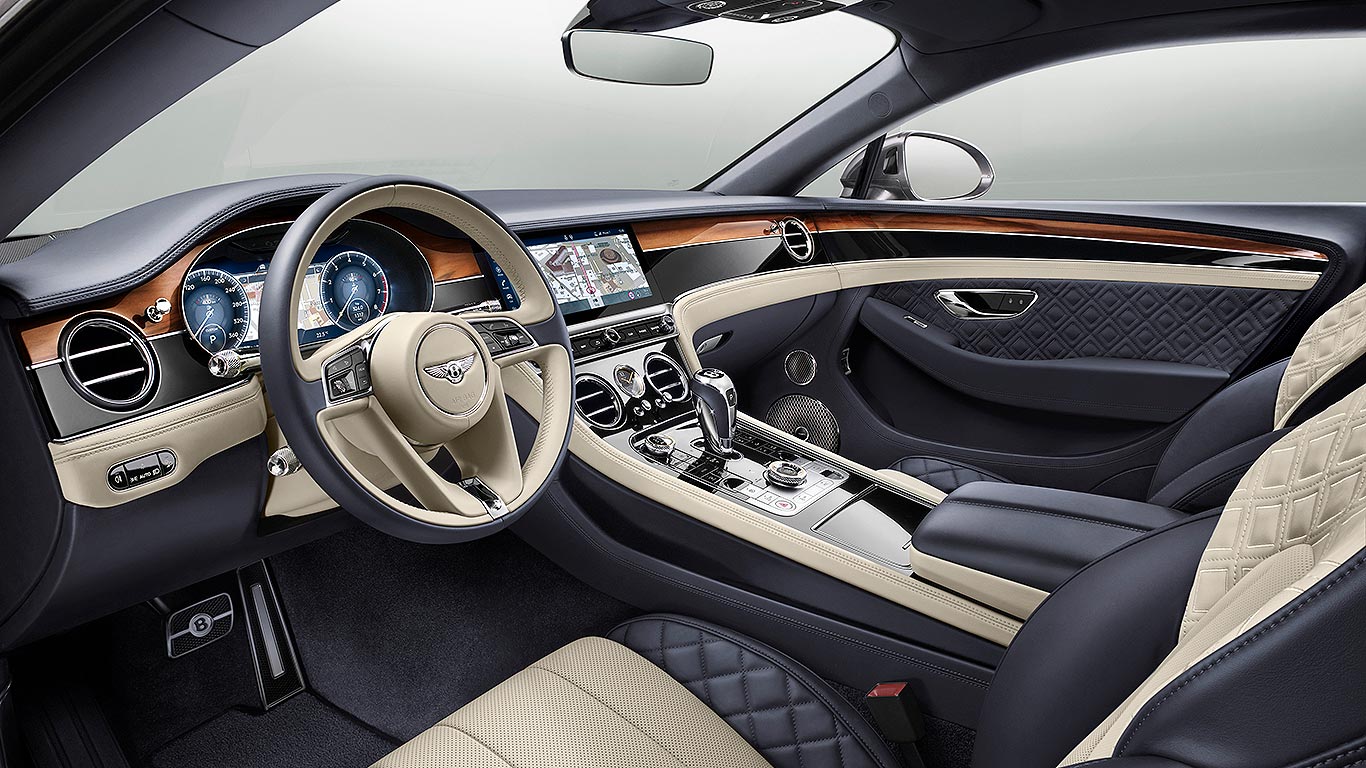 The new Continental GT interior is, basically, going to make jaws drop, the firm says (it phrases it slightly differently, but you get the idea). The wood alone should do this: sporting dual veneers for the first time, there’s more than 10 square metres of wood inside each Continental GT, the assembly and fitting of which takes fully nine hours.

There are luxurious surfaces everywhere, with blinding attention to detail. Bentley uses pillow knurling for some switches and controls, for example: it’s softer and more refined than classic mechanical knurling. And diamond knurling delivers a luxurious feel to other surfaces: choose these new finishes on the vents, bezels and other controls. Bentley even now fits bronze inserts between surfaces on some controls: a “hidden delight,” it says.

Seats set new industry standards for comfort, it says, and can be clad in ‘diamond in diamond’ quilt. All the glass is laminated so their occupants enjoy an interior nine decibels quieter than before. Just the job to show off audio systems that, even as standard, comprise a 1,500-watt Bang & Olufsen setup. Pay to upgrade, and you can have a 2,200-watt Naim system. 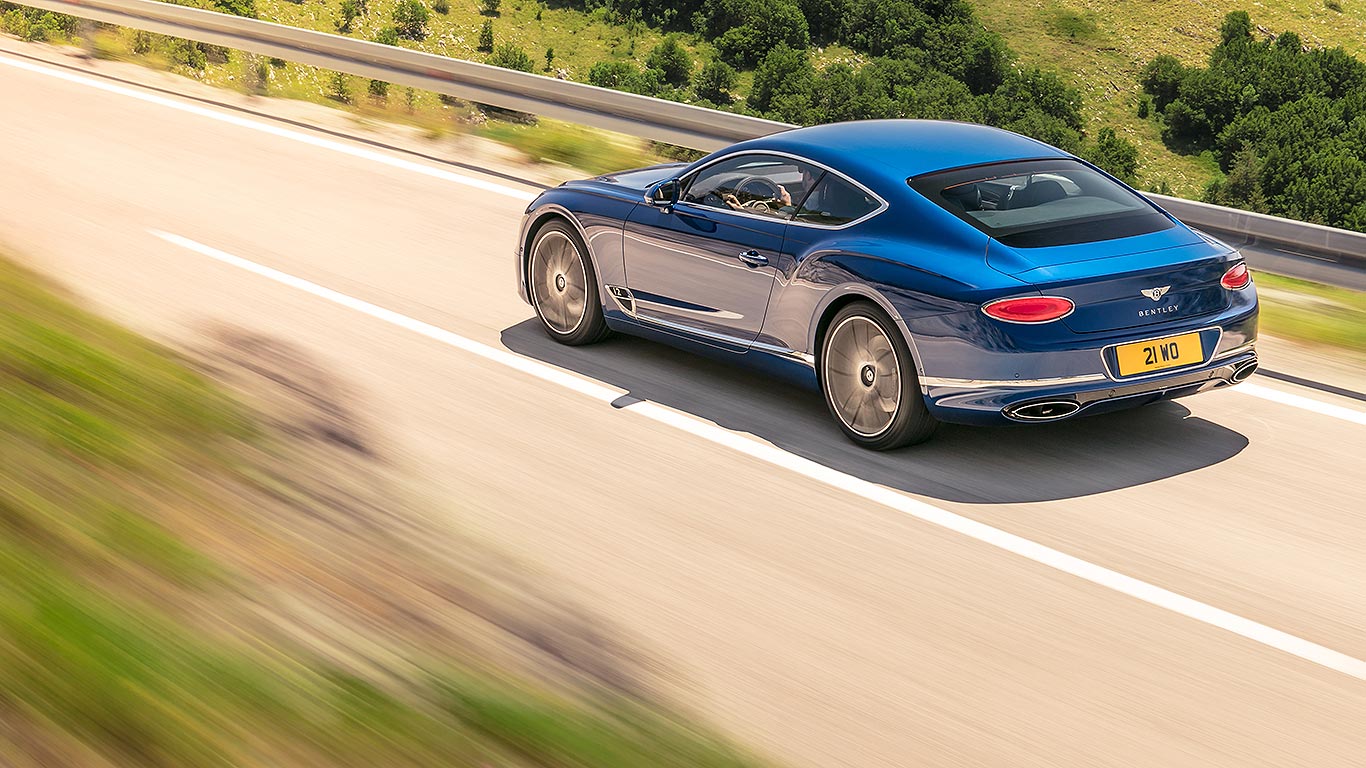 It’s greener than before, with Bentley Variable Displacement tech shutting down half the engine under light loads, and it’s even smoother than before thanks to a slick dual-mass flywheel. Should sir want to show off its accelerative talents, Sport Launch mode serves up split-second-perfect dashes at the press of a button (and the gentlemanly stomp of an accelerator pedal).

The old fixed-split all-wheel-drive system is upgraded to Active All-Wheel Drive, with fully variable torque splits that nevertheless uses rear-wheel drive as much as possible, both for efficiency and dynamics.

The 48-volt suspension tech provides the electrical firepower to stop the new GT rolling through corners without spoiling its straight road air sprung comfort. Passengers are cushioned from excessive movement, says Bentley, but the driver also senses plenty of effortless precision. Moving the engine further back in the chassis also improves weight distribution and dynamics.

Bentley fits 21-inch wheels as standard, 22-inches as an option, and the front brakes are now even bigger still: their diameter is a staggering 420mm. That’s 16.5 inches!

Volvo to sell keyless cars from 2017

Although the record low price of oil could result in the price of fuel dropping below £1 per litre, the RAC has warned motorists not to expect huge savings.
Read more

Why sleep is the best cure for drowsy driving

Opening the car windows won't keep you awake behind the wheel, but a good night's sleep is the best prevention for drowsy driving.
Read more

Lotus Evora GT430 review: the fastest and most expensive Lotus ever

With a six-figure price tag and a top speed nudging 200mph, the Lotus Evora GT430 is a superb track car – and a formidable road machine, too
Read more

If you have a BMW 1 Series, Audi A3 or Mercedes-Benz A-Class on your drive, you’re making a statement. You’re likely to be a young, trendy sort, who cares about appearance but doesn’t need anything bigger than a Focus.
Read more