Tesla reckons its latest Model S P100D is the fastest car in the world. Does it stack up? 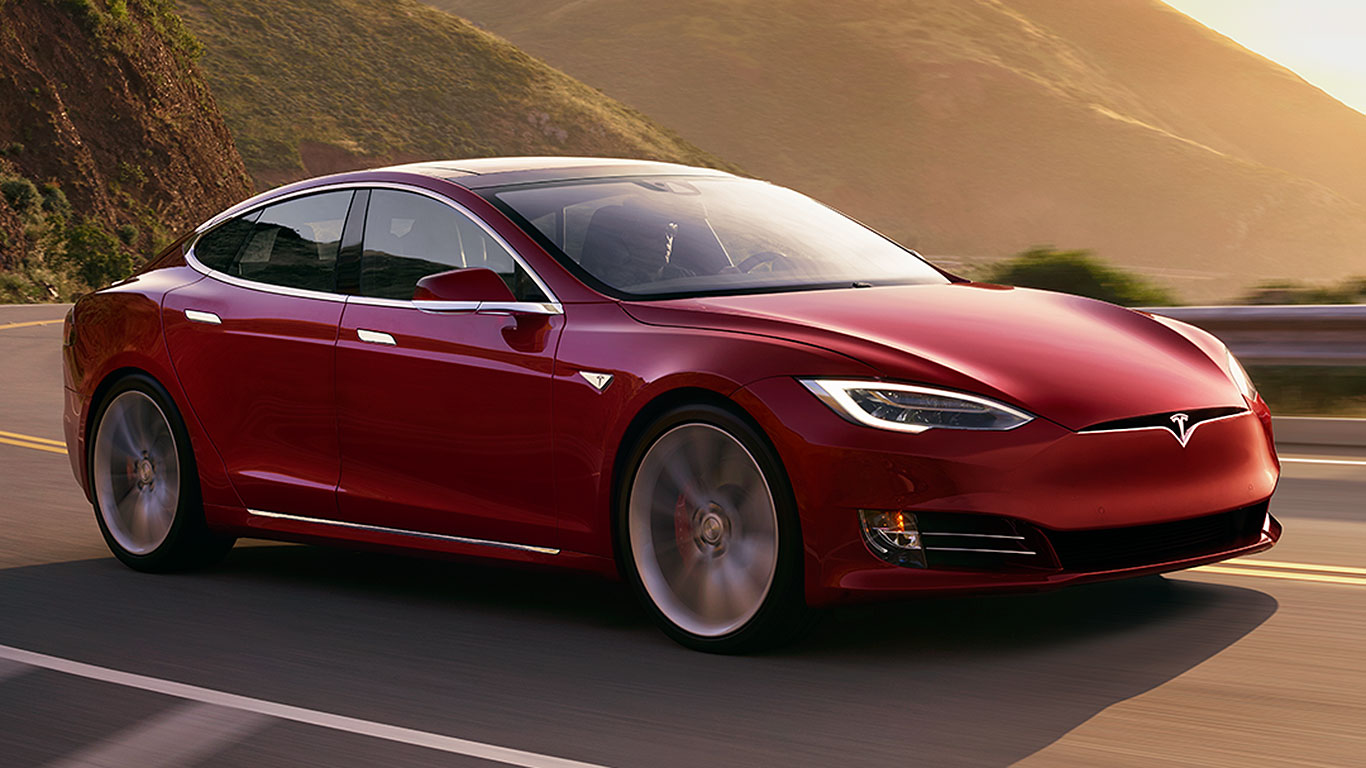 Tesla has launched what it’s describing as ‘the fastest volume production car in the world’ – the Model S P100D with Ludicrous mode can accelerate from 0-60mph in just 2.5 seconds. That’s extraordinarily quick for a family saloon (especially with eco credentials). But how does it stack up against the fastest accelerating cars, full stop..?

For the sake of this feature, we’ll enforce a rule that a car has to be capable of a sub-3.5 seconds 0-62mph time to qualify for inclusion. So, that’s supercars such as the Mercedes-AMG GT S and Aston Martin DB11 eliminated already. We’re taking no prisoners. And, for simplicity’s sake (and to prevent 911 overload), we’ve taken the fastest version of each model.

Launched at this year’s Geneva Motor Show, the Ferrari FF replacement that is the GTC4Lusso boasts a 3.4 second 0-62mph time and a staggering 208mph top speed. That’s in a car capable of carrying four people and gadgets including a new 10-inch infotainment screen.

While there are more finessed supercars featured here, the Corvette Z06 is one of the cheapest – costing around £90,000. The American brute is stonkingly quick compared to its closest rivals, hitting 62mph in 3.4 seconds and a top speed of 186mph. 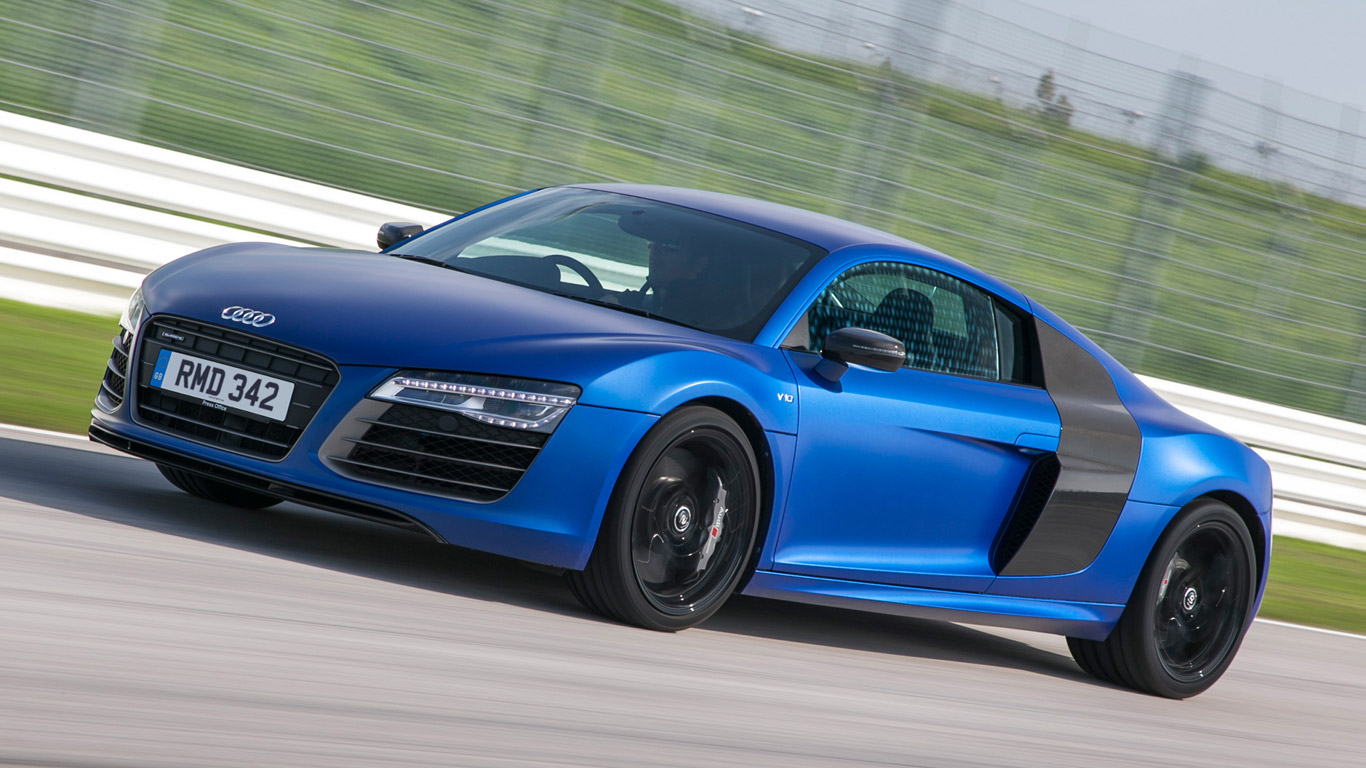 Audi knows how to produce a quick car – its Audi RS6 Performance estate almost qualifies for inclusion here, hitting 62mph in 3.7 seconds. The R8 supercar has been tempting 911 buyers for 10 years now, with the second-generation model arriving last year and covering the 0-62mph run in 3.5 seconds even in ‘base’ spec. In R8 Plus guise, with power from its V10 engine boosted to 610hp, it’ll 62mph in 3.2 seconds.

The Lamborghini Huracan shares a platform and engine with the Audi R8 – but to drive, it feels surprisingly different. The four-wheel-drive LP 610-4 matches the R8 Plus’s 3.2 seconds 0-62mph sprint.

Until the watered-down 540C came along, the 570S was an entry-level McLaren. An entry-level McLaren with a revised version of the same 3.8-litre twin-turbocharged V8 engine as the the McLaren 650S and P1. It hits 62mph in 3.2 seconds and a top speed of 204mph. 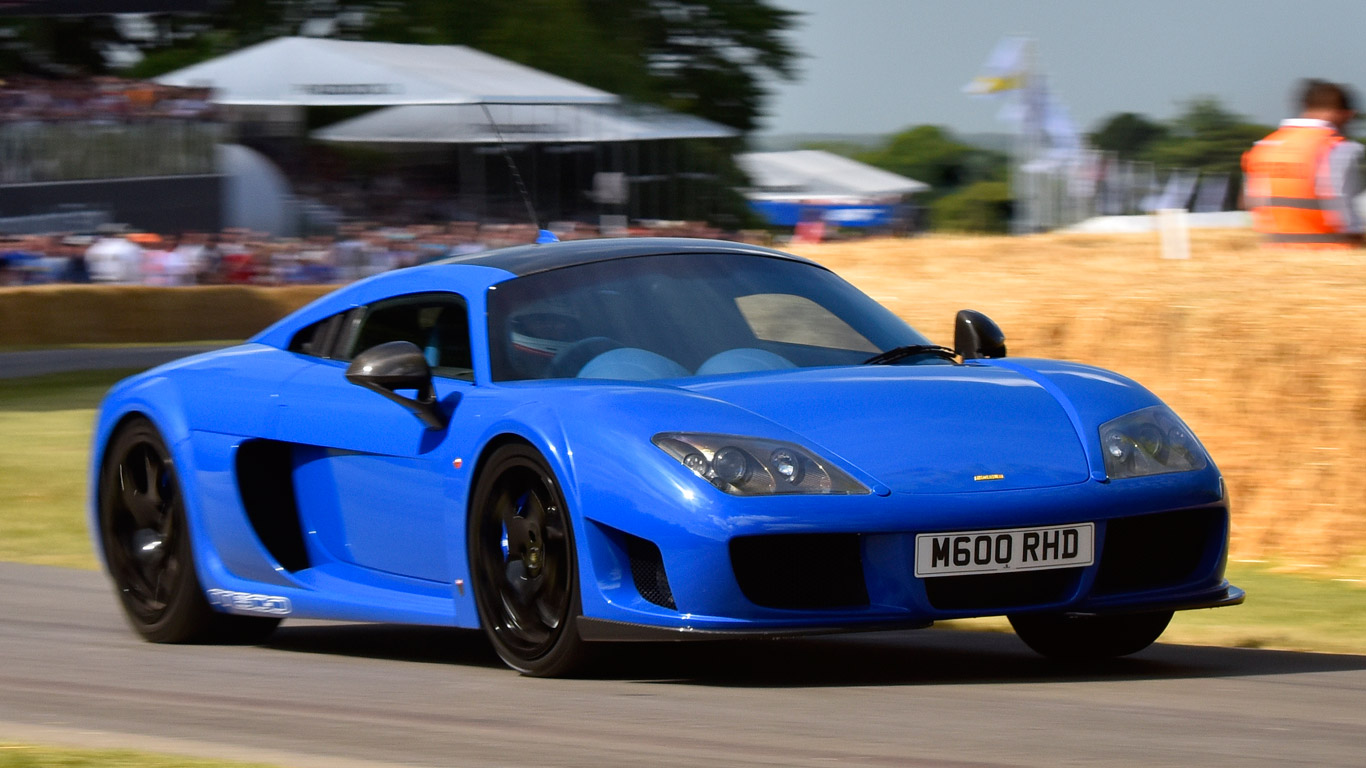 Built in a shed in Leicestershire, the M600 uses a twin-turbocharged Volvo V8 to produce up to 659hp – a hefty amount of power for a lightweight sports car made of a mixture of stainless steel and carbonfibre. It’ll hit 62mph in 3.0 seconds flat.

The old naturally-aspirated Ferrari 458 wouldn’t have qualified for this feature in standard form, but its turbocharged successor hits 62mph in 3.0 seconds flat. Both the GTB coupe and soft-top Spider versions take the same amount of time to accelerate to 62mph, while top speed is in excess of 200mph.

A carbonfibre tub combined with a 3.8-litre twin turbo V8 makes for a Ferrari-baiting 0-62mph time in the McLaren 650S. Hitting 62mph takes 3.0 seconds in both the Spider and coupe variants. That’s 0.3 seconds quicker than its short-lived 12C predecessor. 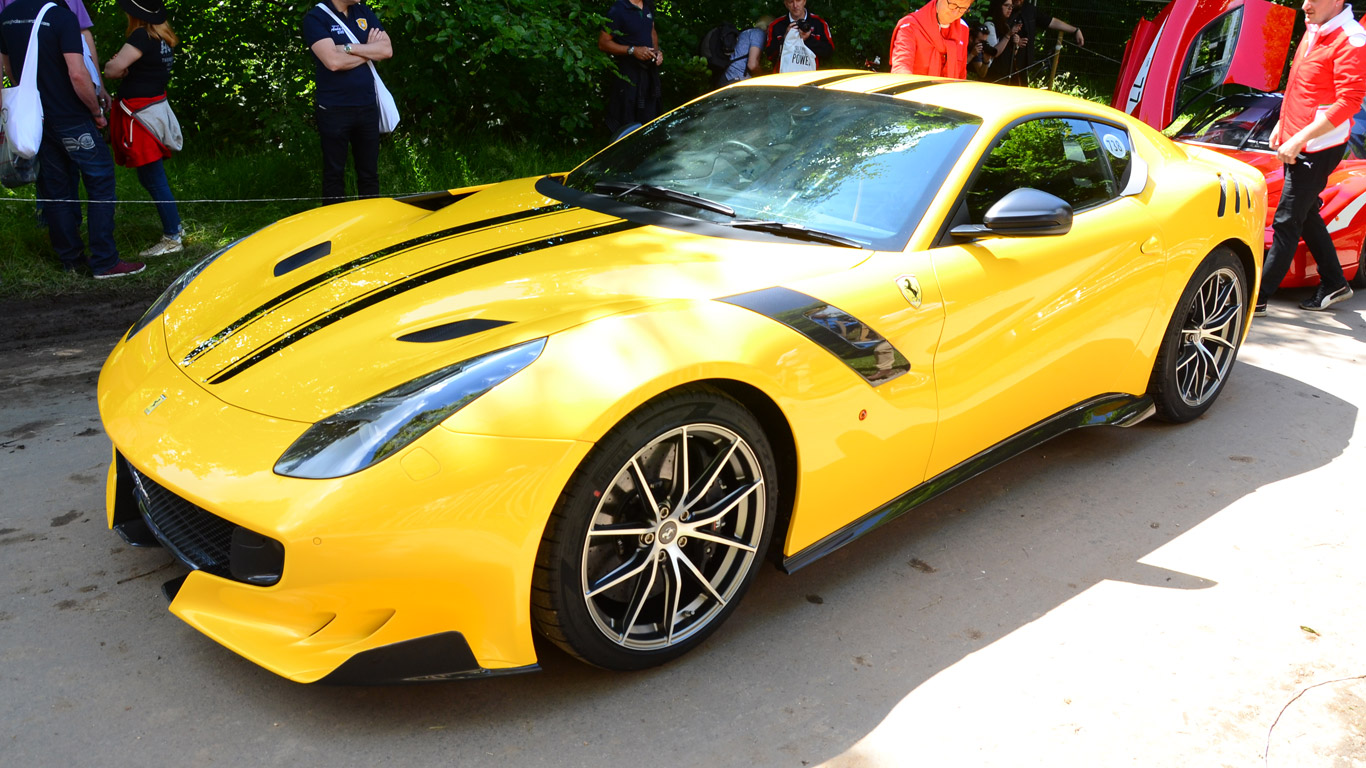 While the regular Ferrari F12 Berlinetta doesn’t cut the mustard in performance terms (in our harsh sub-3.5 sec requirements, anyway), the track-ready F12 TDF hits 62mph in 2.9 seconds. That’s thanks to a 39hp power boost from its V12 engine (taking the total to 780hp), while 110kg has been shaved off the total weight. To help deploy such performance, an incredible 230kg of downforce is created using some trick aero.

The Porsche 911 Turbo S is arguably the 911 nobody needs. Lesser models (now turbocharged, too) offer easily plentiful performance for even the most enthusiastic of Autobahn drivers, but for bragging rights the Turbo S is the one to have. The latest incarnation hits 62mph in 2.9 seconds, a top speed of 205mph and has lapped the Nürburgring in 7min 18sec.

This is the result of McLaren’s engineers taking a 650S, improving as many bits as they possibly could, and producing a car that’s almost as fast as its flagship P1 hypercar. The McLaren 675LT shares many components with the P1, while 100kg has been shaved of the 650S’ weight. No wonder it can hit 62mph in 2.9 seconds. 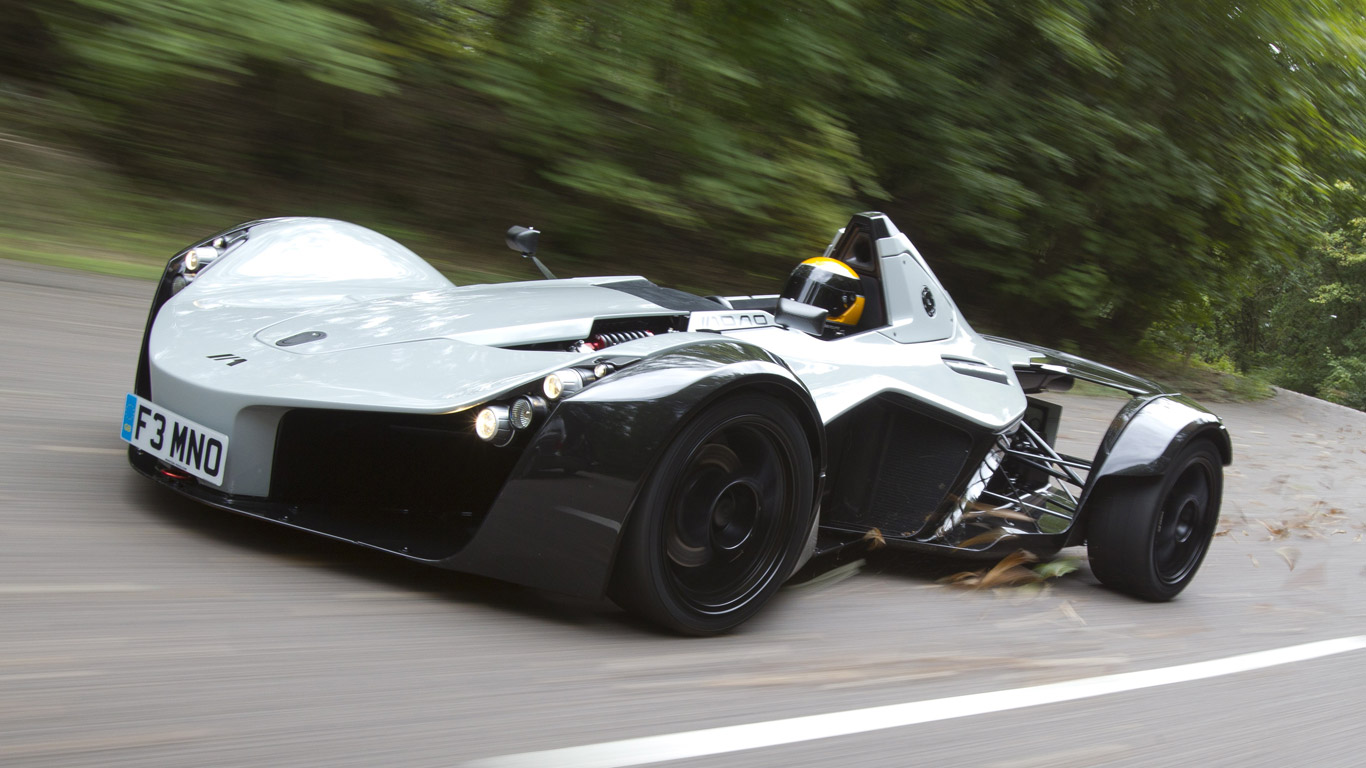 Jeremy Clarkson described it as ‘amazing’. Yet another bonkers car from a small-time Brit, the BAC Mono boasts a power to weight ratio of around 525hp per tonne. No wonder it’ll hit 62mph in comfortably less than 3.0 seconds.

Revealed at this year’s Geneva Motor Show, the Centenario is Lambo’s Aventador-based supercar launched to commemorate Ferruccio Lamborghini’s 100th birthday. A tweaked version of the Aventador’s 6.5-litre V12 produces 770hp. Unfortunately, all 40 examples (20 coupes and 20 Roadsters) are sold out.

Sharing the Centenario’s engine, the performance-spec Aventador SV packs 750hp from its naturally-aspirated V12. Carbonfibre body panels and a stripped-out interior means it packs a dry weight of 1,525kg – 50kg less than the regular Aventador. It hits 62mph 0.1 seconds quicker than the standard model. 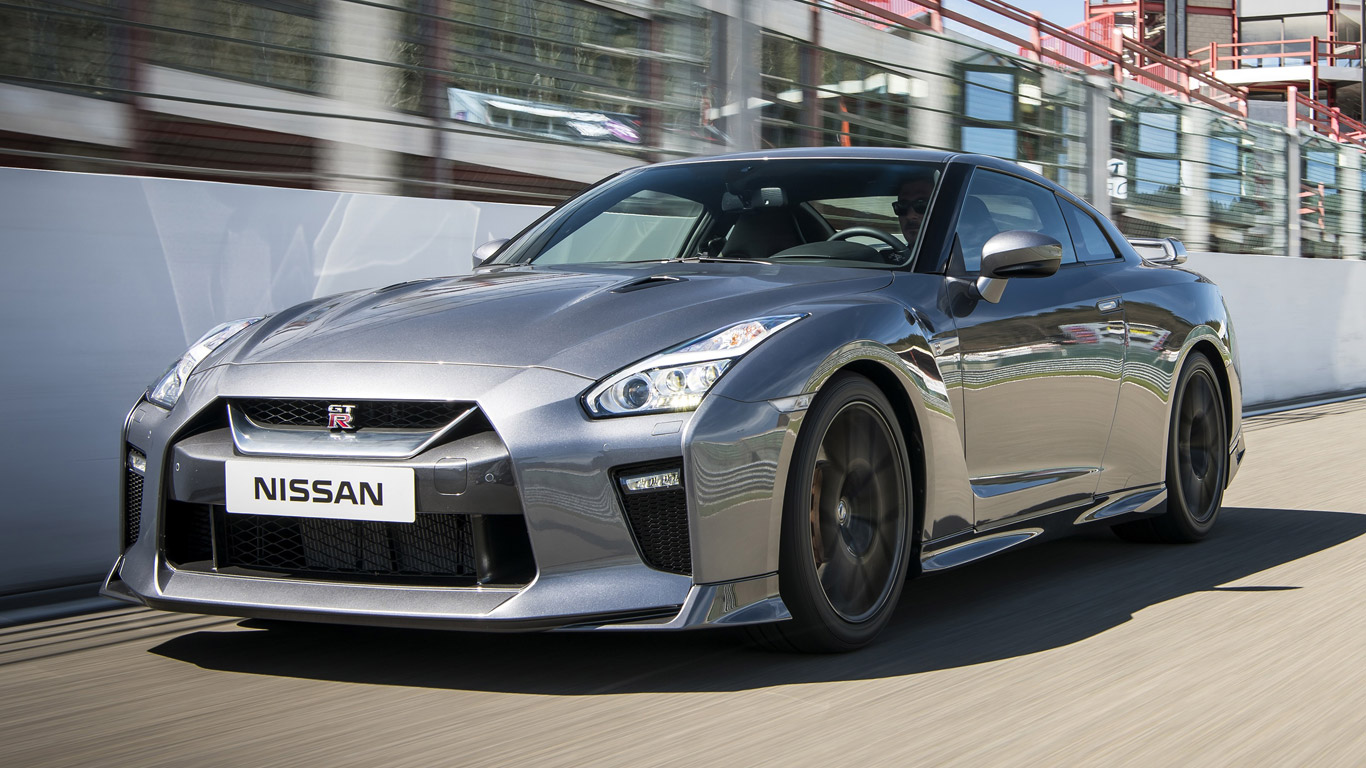 Nissan. The firm that once made the Bluebird, but now better known for its popular Qashqai crossover. It also makes the GT-R Skyline successor, launched in 2007 and getting ever-faster nearly a decade later. Top Gear magazine described the 2.8 second 0-62mph time of the latest GT-R as ‘frankly violent’. We won’t disagree.

The most bonkers thing to come out of Sweden, Koenigsegg describes its Regera as a ‘megacar’. We’ll go with that. At lower speeds, the Regera is powered by three electric motors, while a mid-mounted twin-turbo 5.0-litre V8 kicks in when you ask more from it.

If you’re going to accelerate from standstill to 62mph in less than 3.0 seconds, you probably want to be doing it in something fairly substantial. But the tiny, flimsy, ancient Caterham Seven can hit 62mph in 2.8 seconds in flagship 620R spec. The firm’s fastest ever road car, it’ll take serious guts to give it full whack on the commute – but you’ll probably giggle more than any other car featured here. 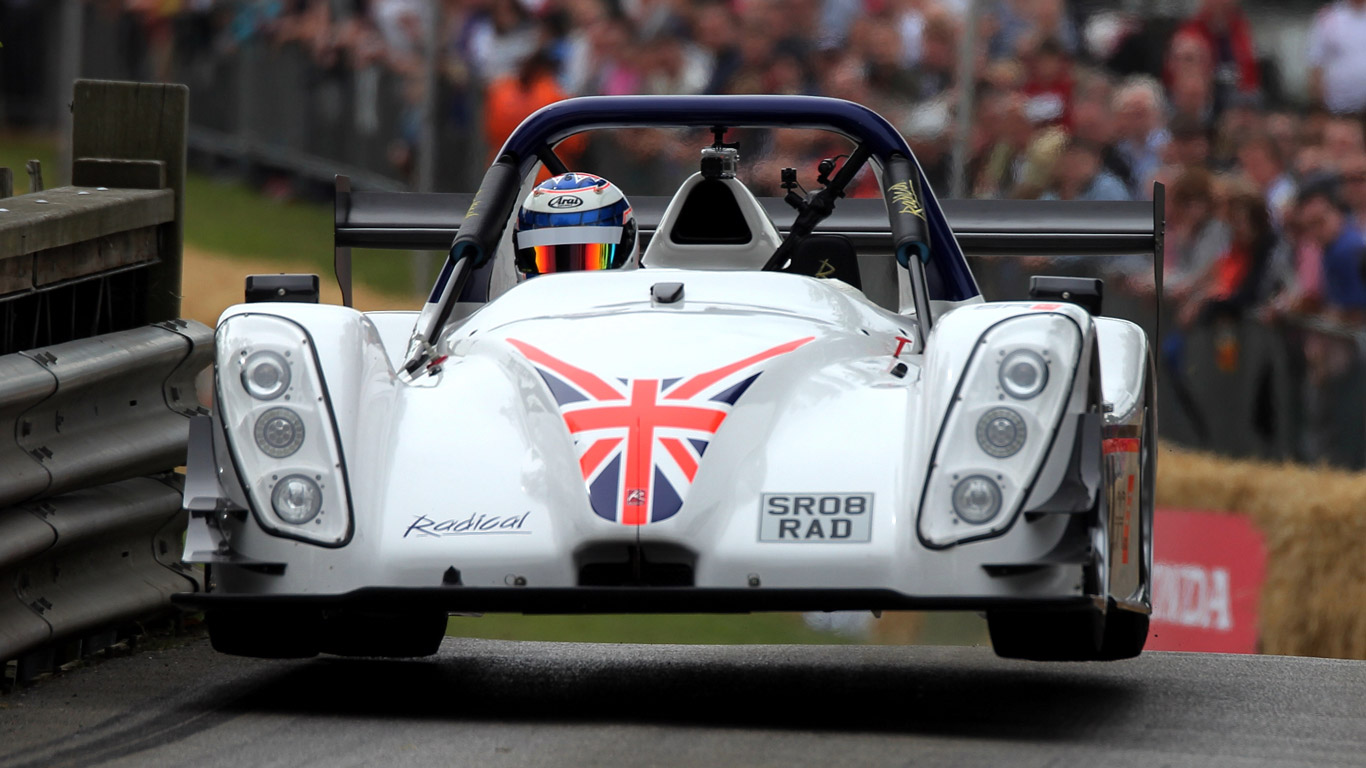 The Peterborough-built Radical SR8 is essentially a race car, but it can be registered as a road-legal vehicle. It holds the Nurburgring lap record, completing the legendary German circuit in 6 minutes, 48 seconds. Powered by a 2.7-litre V8 producing 430hp, the Radical will hit 62mph in 2.7 seconds and a top speed of 178mph.

Put a 2.0-litre Honda VTEC engine into a car that weighs around half a tonne and you get a car that is seriously quick. With its exoskeleton frame, the Ariel Atom is guaranteed to be one of the fastest cars on a track day but, like the Caterham, we’d be a bit nervous about high-speed Autobahn runs.

The Hennessey Venom GT might look a bit like a Lotus Exige… that’s because it’s based on a heavily modified Lotus Exige. The car, tweaked by American firm Hennessy, set a Guinness World Record in 2013 for the fastest production car from 0–186 mph. It completed the run in an average 13.63 seconds. 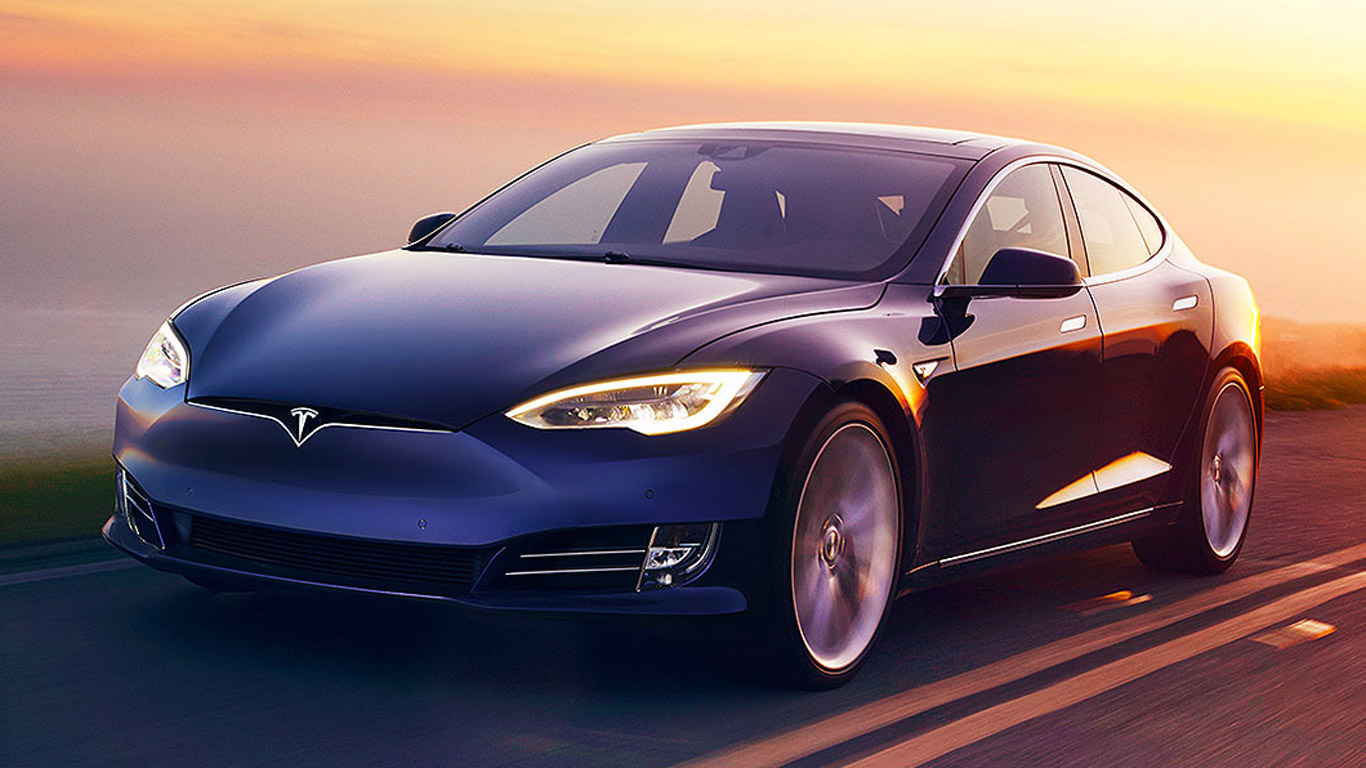 And this is where the Tesla slots in. There is a caveat – the 2.5 seconds time Tesla’s bragging about is 0-60mph, not 0-62mph. In reality, that extra 2mph is unlikely to take more than a tenth of a second, as the Tesla’s electric powertrain means there’s no chance of a gear change fluffing up the 0-62mph sprint. But are Tesla’s ‘fastest car’ claims correct..?

Technically, the Porsche 918/LaFerrari/McLaren P1 hypercar trio have no right to appear here as they’re no longer in production. But for comparison sakes, we thought we’d chuck them in. The LaFerrari covers it in ‘less than’ 3.0 seconds, while the Porsche 918 and McLaren P1 take 2.5 seconds. Yup, the Tesla is almost as fast as these three to 62mph.

So this is the only road-going car currently on sale that’ll hit 62mph a fraction of a second quicker than the Tesla. Bugatti says its Chiron, the Veyron-successor, will reach 62mph in ‘less than’ 2.5 seconds. You’d kind of hope so, with an incredible 1,500hp from its 8.0-litre W16 quad-turbocharged engine. It’s limited to 261mph. But with just 500 Chirons expected to be sold, and a £1.9 million price tag, it’s still fair to describe the Tesla as ‘the fastest volume production car in the world’. Now click back and remind yourself of all the supercars the Tesla beats!

How far do the most popular electric cars REALLY go on a charge?

The real-world range of popular electric cars has been tested in... the real world, including range and what happens when they 'die'
Read more

You could come up golden with this rare 1989 Trump Cadillac

Current President of the United States created two custom Cadillac offerings in the 1980s, made in collaboration with Dillinger-Gaines Coachworks
Read more

The BMW 116d EfficientDynamics Plus proves that creating an 83mpg 1 Series by dropping in a MINI diesel engine really can work.
Read more

For the first time since 1966, it is free to use both the Prince of Wales and original Severn Crossing as fees are abolished by the UK government
Read more