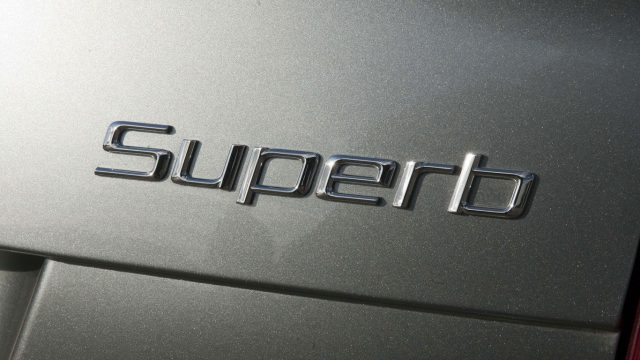 The history of the car is littered with car names of varying degrees of success. For every Interceptor and Thunderbird there’s a Grandland X and Probe.

But what about the most literal car names ever to grace a bootlid? We’ve assembled a list of 20 for your pleasure. 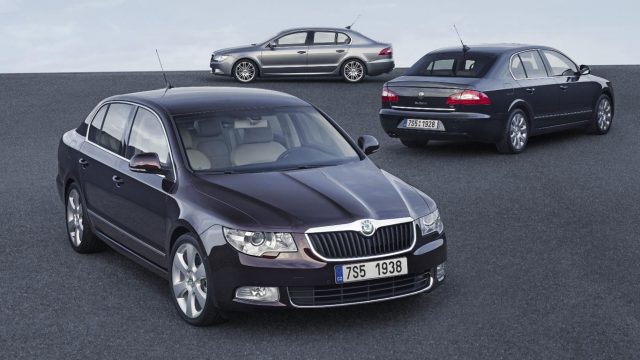 “The name Superb has to be earned,” proclaimed Skoda in the book to accompany the launch of its third generation flagship model of the modern era. The Superb, you see, dates back to 1934, when its name reflected its class, sophistication and a wealth of technical innovation.

It’s fortunate that the current Superb is able to live up to its name. The alternatives, such as ‘Skoda Merely Adequate’ or ‘Skoda It’s Really Good But Some Folk Will Still Buy An Audi’, don’t exactly roll off the tongue. 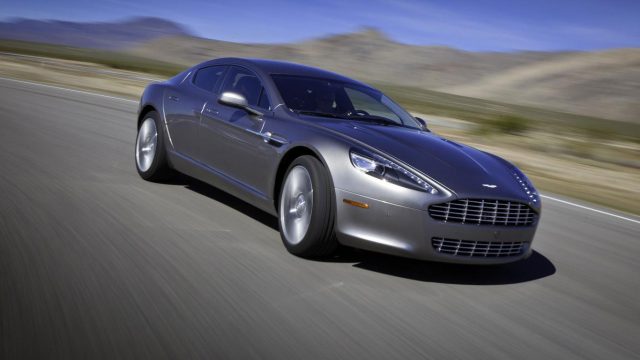 Ah, the Rapide: a non-stop coach service – predominantly to London – with fewer seats, a hostess service and – wait for it – a toilet. Passengers had never had it so good on the National Express.

In truth, the Aston Martin Rapide would probably get to London Victoria faster than an MCW Metroliner, but you’d have to take your own jolly hostess for crisps and tea. The name dates back to the Lagonda Rapide of 1961. 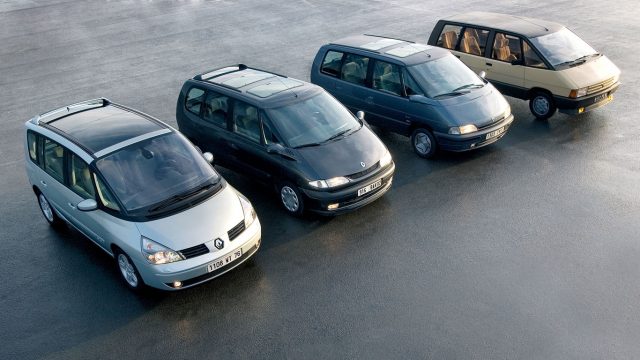 The Renault Espace wasn’t the first MPV – rivals from America and Japan got there first – but it had the most influence on this new segment. Looking back, it’s hard to believe that Matra struggled to convince carmakers that a car-like people carrier had genuine potential.

With Peugeot and Citroen failing to see the light, Matra turned to Renault who accepted the idea. After a slow start, the Espace – which is French for ‘Space’ – struck a chord with European buyers and inspired a number of imitators. Twenty-three years on, the MPV seems to have had its day, as motorists turn to crossovers for their practical kicks. 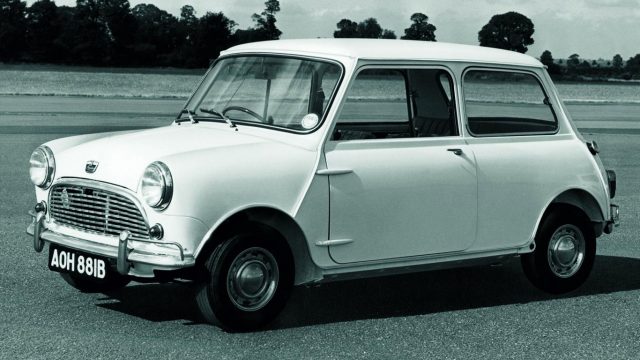 The ‘Swinging Sixties’ was the decade of the mini. Opinions vary on who invented the miniskirt, but London designer Mary Quant did more than anyone to thrust the short skirt into the mainstream of popular culture. Then there’s the Mini, first introduced in 1959.

Alec Issigonis’ creation was a triumph of packaging and marketing, helped in no small part by the name. Mini is little more than a shortened ‘miniature’, ‘minimal’ or ‘minimum’, but it became the accepted word for anything small or reduced in size. Genius. 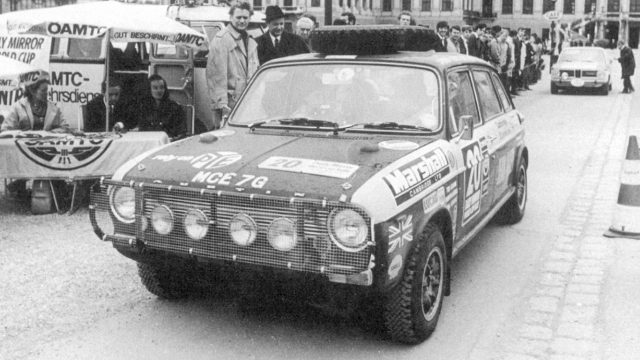 You could write what we know about fashion on the side of a Boden clutch bag, but we know that the maxi skirt reaches down to the ground. The floor length skirt became fashionable in the late 60s, embraced by hippies who shunned the more revealing miniskirt. Or maybe they didn’t have the legs for it.

Whatever, the Austin Maxi arrived in 1969 and was the final car designed by Alec Issigonis. Once again, the emphasis was on interior packaging, with the Maxi blessed with a commodious boot and rear seats that could fold in both directions. Issigonis’ final car was British Leyland’s first and it set the tone for a decade of mismanagement and missed opportunities. 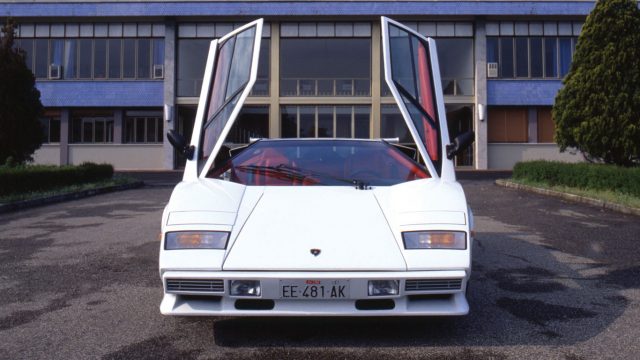 Forty-six years since the Lamborghini Countach wowed the crowds at the 1971 Geneva Motor Show, it still has the ability to turn heads and send jaws plummeting to the floor. While it couldn’t compete with the Miura in terms of beauty, it blitzed its predecessor in terms of theatre.

And that name is the work of brilliance. Countach, you see, is a Piedmontese expletive meaning “wow”, or perhaps something a little stronger. 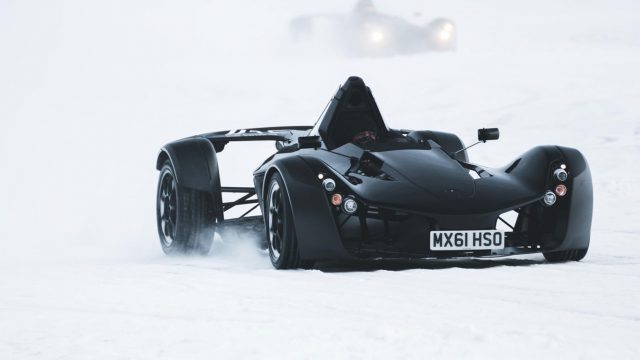 Mono is derived from the Greek mónos, meaning “alone, only, sole or single”. The perfect name for a track-focused single-seat car, then?

Briggs-Automotive Company – better known as BAC – certainly think so, which is why its lightweight race-car for the road is so-named. Other single-seat cars include the Lamborghini Egoista and Dodge Demon. Neither of which can claim a literal name. 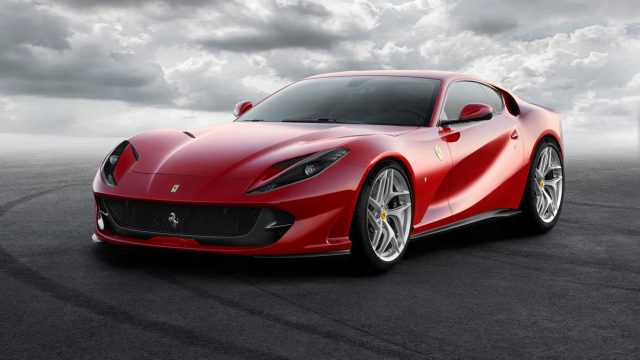 Matchbox created the Superfast line in direct response to a new breed of free-wheeling rivals, most notably Hot Wheels. Keen to retain its crown as the king of the living room carpet, Matchbox introduced super-quick low-friction wheels and new, ‘faster’ colours.

The Superfast name works well when it’s attached to a brand of diecast models, but the jury is out when it comes to the Ferrari 812 Superfast. Not that the name is anything new – the 500 Superfast was introduced in 1964. How fast was it? Superfast… 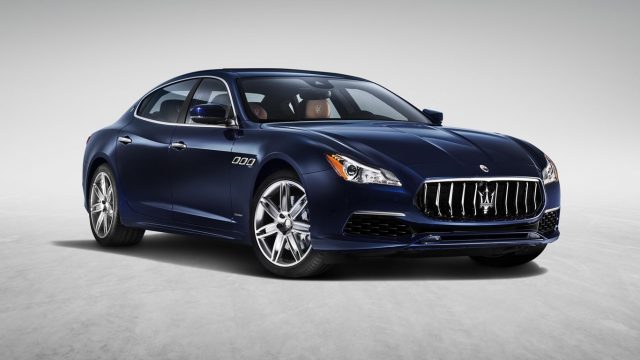 It’s universally accepted that everything sounds better in Italian. Monica Bellucci might be telling you that her drain is blocked with raw sewage and it’ll sound like she’s inviting you to play beach volleyball with her best friend Sophia. 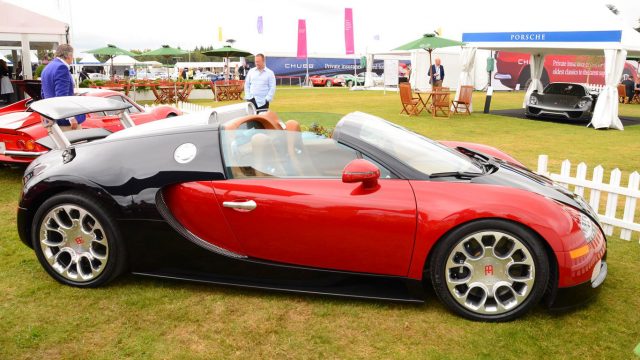 The Vitesse name – which is French for ‘speed’ – rose to prominence in the 1960s with the go-faster version of the Triumph Herald. The name was reintroduced in the 1980s with the launch of the Rover SD1 Vitesse: an aggressive brute of a machine.

But if any car is able to live up the Vitesse tag, it has to be the Bugatti Veyron. In the Grand Sport Vitesse, Bugatti created the fastest and most powerful production roadster in the world. Top speed: 254.04mph. 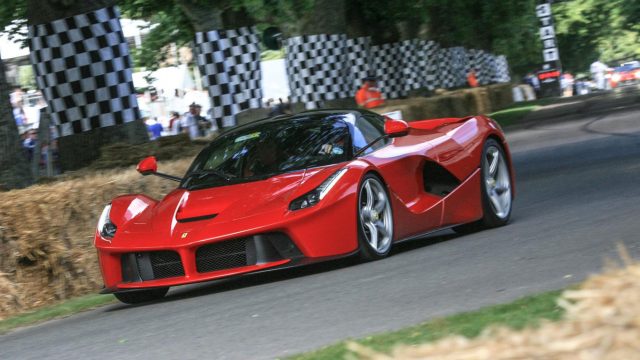 Opinions vary as to whether or not LaFerrari is a good name, but you have to admire Ferrari’s bold approach. By calling it ‘The Ferrari’, Maranello is essentially saying that it has reached a peak – this is as good as it gets.

The question is, where does Ferrari go from here? When the LaFerrari is eclipsed – which it will be – what will it be called? ‘The Ferrari: Remastered’, perhaps. ‘The Ferrari: Reprise’, maybe. Then again, perhaps not. 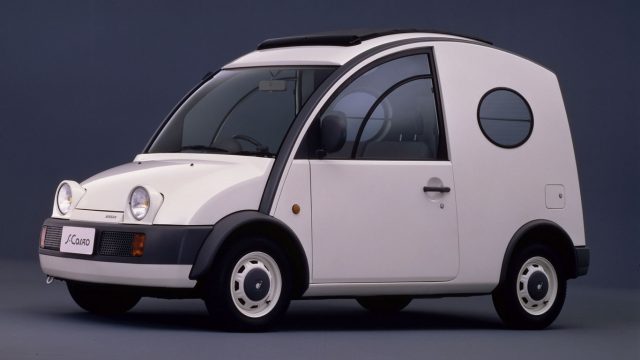 The Nissan S-Cargo paid homage to the Citroen 2CV Fourgonnette and included a number of subtle references to the classic van. A single-spoke steering wheel and roll-back roof were just two of the references to the French utility vehicle.

Then there’s the name. Officially, S-Cargo is short for Small Cargo, but it sounds like escargot, which is French for snail. And ‘Tin Snail’ was the nickname given to the Citroen 2CV. Clever thinking, Nissan. And a neat van, too. 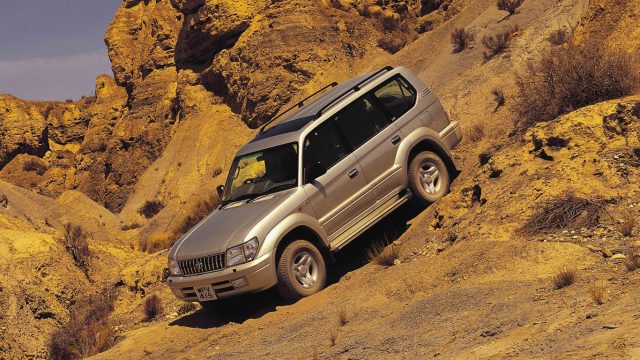 Land Rover has a good track record of conjuring up cool names, with Defender, Discovery and Range Rover the most impressive. In terms of setting a scene, these cars score highly, but they’re eclipsed by the Toyota Land Cruiser.

The name was introduced in 1955, but the Land Cruiser’s origins lie in the Jeep BJ of 1951. The most capable model available in the UK is the Invincible. Toyota must have incredible faith in its product to label it such. No pressure… 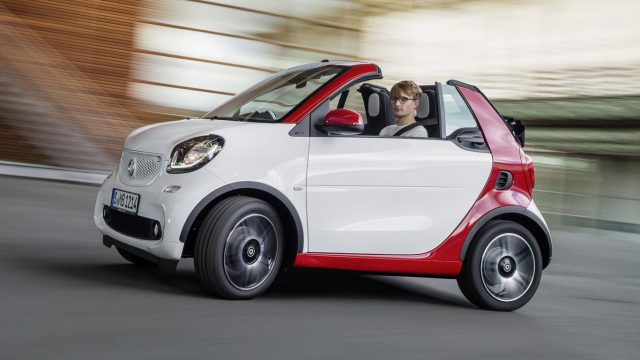 In 2013, Bernstein Research produced a list of the most loss-making European cars of modern times. Sitting pretty at the top of the table was the original Smart Fortwo, which delivered a €3.35 billion loss for Mercedes-Benz, almost double that of the A-Class.

It’s fair to say that Mercedes-Benz won’t remember 1997 with a great deal of fondness. On the plus side, the Fortwo was and remains a great name. A small car for two people, joined by the Forfour: a larger car for four people. Bravo. Doesn’t help with those lost billions, mind. 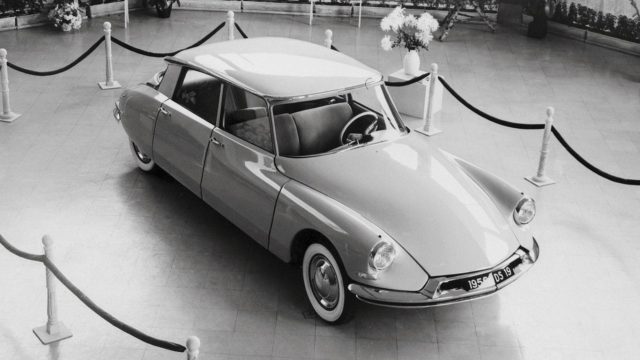 These days, carmakers are unable to launch new cars without a series of teaser images, carefully-worded press releases and a huge dollop of hype. Citroen did things differently, and the DS was kept under wraps until its debut at the 1955 Paris Motor Show.

Unquestionably, the Citroen DS was one of the most significant cars of the 20th century, but it was also blessed with one of the most inspired names. DS is a pun based on ‘Déesse’, which is the French word for ‘Goddess’. 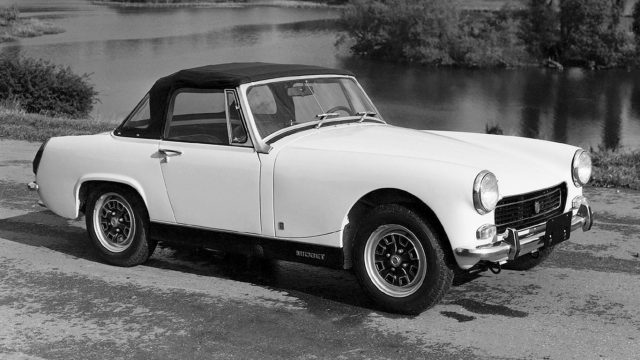 Times change, and while Midget might have been a perfectly acceptable name for a sports car in the 60s and 70s, the same wouldn’t be true today. Indeed, according to Little People of America, “the word ‘midget’ is considered a derogatory slur”.

We had a look through the archives for alternatives, which include ‘Hop-o’-My-Thumb’ and ‘Dandiprat’. Whilst not great, they’re preferable to Grandland X, Kadjar and F-Pace. 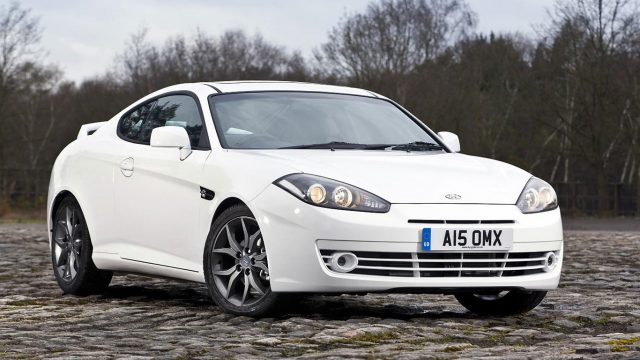 When all else fails and the ‘Generator-o-Names’ refuses to play ball, it’s time to throw caution to the wind and chuck any creativity out of the window. Which is how Hyundai must have stumbled upon Coupe for its, er, coupe.

In fairness, the Coupe was known as the Tiburon and Tuscani in other markets, but it’s hardly the most appealing name. That said, the earlier model was known as the Scoupe: a combination of ‘sporty’ and ‘coupe’. And nothing at all to do with portions of ice cream. 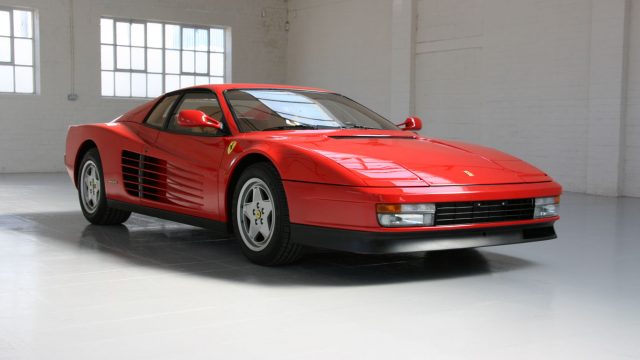 The 250 Testa Rossa, which completed its first race in 1957, was one of the most successful competition Ferraris in the history of the company. The name, quite literally, means ‘Red Head’, a reference to the red-painted camshaft covers.

In 1984, the name reappeared, this time in the form of the Testarossa, which once again featured the red-painted covers. 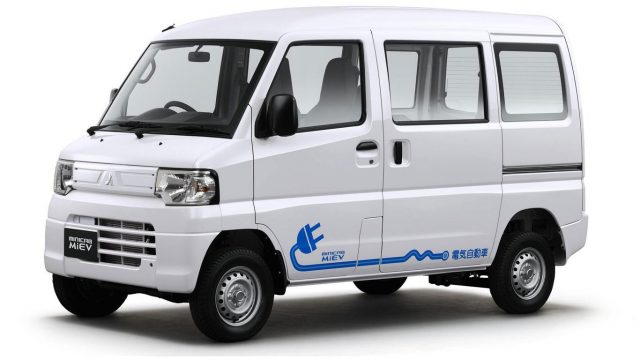 The Mitsubishi Minicab is a range of light commercial vehicles sold in Japan since 1966. As kei trucks, they’re powered by small engines housed in very small cabs, hence the Minicab name.

In 2011, Mitsubishi introduced an electric version, known as the Minicab MiEV. 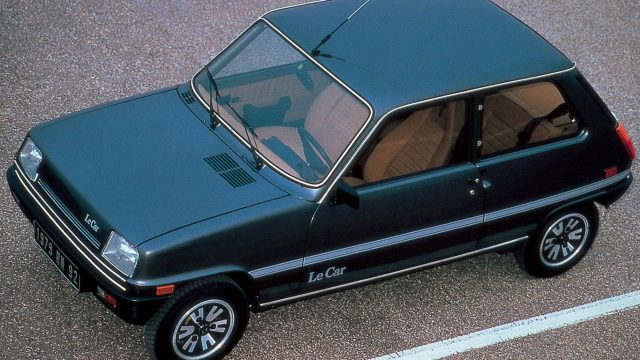 The Renault 5 made its North American debut in 1976, marketed as Le Car by Renault. Contemporary ads positioned it as the ‘Le City Car’, whilst claiming that, “In Europe, nearly two million people drive Le Car with passion.”

As for the name, ‘Le Car’ means ‘The Bus’. We’re not sure ‘La Voiture’ would have caught on in America.