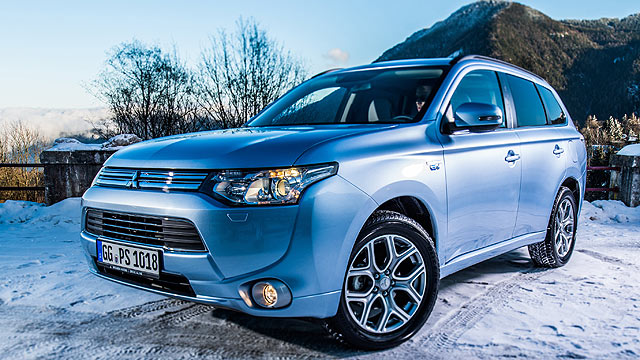 Mitsubishi will sell the new Outlander PHEV for the same price as the equivalent diesel models in a move that boss Lance Bradley believes may “blow the market apart”.

The firm will sell the hybrid-electric SUV – which boasts a 30-mile electric-only range courtesy of large capacity batteries recharged by plugging into the mains – from £28,249, far below the £40k price tag many people were expecting.

It means Mitsubishi has effectively already has sales in the bag, before it even went on sale: Bradley revealed that some customers have committed to buying with dealers “so long as it costs under £40,000.”

This reveals, he adds, what the market was expecting the model would cost: bringing it in for so much less means “it could be a gamechanger”.

Bradley says he is thus like a child before Christmas who wants a bike, has seen a bike-shaped package in the garage, believe he’s getting a bike but won’t know for sure until Christmas day.

He spoke to us last night, on ‘Christmas Eve’: the Mitsubishi Outlander PHEV may have been launched on 1 April, but this is no April Fool.

Bradley believes the Outlander PHEV may be as significant for the company as the L200 double-cab pickup was back in the early 2000s. When the tax rules changed, Mitsubishi was the only brand with a vehicle on the market that met them – and sales boomed.

The Outlander PHEV gives it another opportunity to capitalise. The only plug-in hybrid SUV on the market, Bradley says its headline-grabbing price, coupled with its fleet-friendly tax advantages and negligible fuel consumption, could see it win significant market share.

Fleet has particular potential. “It’s a market worth 1 million cars a year and 500,000 are sold in the Outlander PHEV price range. With such advantageous Benefit In Kind (just 5%), we’re possibly even in with a chance of tempting BMW 3 Series drivers to switch.”

Potential to “use no fuel”

Bradley even has a neat way to illustrate how the vehicle works: for some, they could buy it and “never use any fuel ever again.

“If their daily driving range is 30 miles or less, and they recharge it every night, the engine may not need to start and they thus won’t use any petrol.”

This is why, for Bradley, it’s Mitsubishi’s biggest opportunity in a decade. “Every now and then, you get a car that stands out – Mazda MX-5, Jaguar F-Type… we reckon the Outlander PHEV is one of those cars.

“We’re hugely excited by it.”