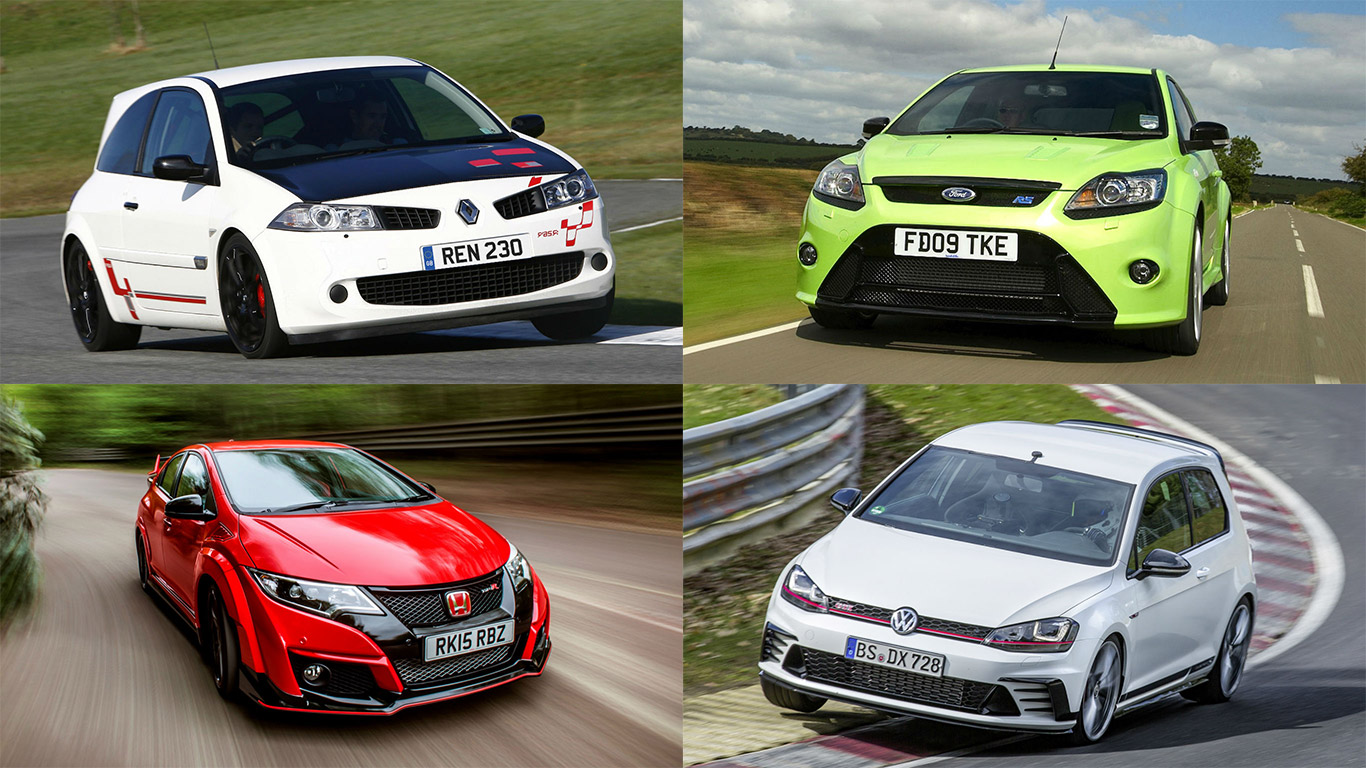 he Nurburgring is the world’s most notorious racetrack. Its 13 miles of tortuously twisty tarmac serve as a proving ground for new cars – with manufacturers competing to set the lowest lap times.

Lapping the Nurburgring in less than nine minutes is no mean feat for a car as comfortable and family-focused as the Golf R32. Interestingly, the car was actually faster to 62mph (6.2sec) when fitted with Volkswagen’s DSG semi-automatic gearbox.

A dedicated Nurburgring special edition? Yep, and Vauxhall built 835 of them to celebrate the car’s 8min 35sec lap time. A Corsa VXR Nurburgring followed in 2011.

For £1,500 more than the standard VXR, you got an extra 15hp, a Remus exhaust, white alloy wheels and lots of stickers. Alternatively, replicate the look yourself with one of those two-quid Nurburgring stickers off eBay…

Fast and (usually) orange, the original Focus ST matched the 8min 35sec time of its arch-rival Astra. Its 225hp five-cylinder engine came from Volvo and is famously thirsty when driven hard.

Today, you can buy estate and diesel versions of the ST, but the 2005 original remains our favourite. Like many fast Fords, it’s a bit rough around the edges, but it’s more characterful than a contemporary Golf GTI.

Brightly-coloured fast Fords, you say? Meet the daddy. The Mk2 Focus RS is a modern classic, with in-yer-face styling and a mighty 305hp turbocharged four-pot.

Ford hasn’t attempted the ’Ring in the latest (Mk3) Focus RS yet. However, with 350hp, it’s likely to be even quicker. We reckon the Ultimate Green paint seen here is worth a least 10 seconds off the lap time….

Meet the first in a string of ever-faster Renault Meganes competing for top honours at the Nurburgring. The R26.R was the most extreme version of the ‘shaking that ass’ Mk2 Megane. Only 450 were made.

This isn’t your typical hot hatchback. The stripped-out R26.R has no rear seats, passenger airbags or radio. Crucially, it came shod with super-sticky Michelin or Toyo tyres, which were biased for track (and dry weather) use.

Another Megane, this time the – even faster – third-generation car. The limited-edition RS Trophy boasted 265hp and a top speed of nearly 160mph. Heady stuff for a hot hatch.

More impressive, though, was the Trophy’s ability to go around corners. It lapped the Nurburgring in 8min 7.97sec – without resorting to the extreme weight-loss measures of its R26.R predecessor.

Spanish carmaker SEAT is known for breaking ’Ring records – its Leon ST Cupra 280 is currently the fastest estate to lap the track. The hatchback Cupra can’t make that claim, but it still edges under eight minutes.

The record-breaking (at the time) Leon was fitted with beefed-up Brembo brakes and Michelin Pilot Sport Cup 2 tyres – both available as part of SEAT’s Performance Pack option. The Cupra has since gained an extra 10hp, potentially making it even quicker.

Our third Megane – and the fastest to date – is the RS 275 Trophy-R. The car was developed in response to SEAT breaking the front-wheel-drive record with the Leon Cupra 280, and it succeeded in taking the title back.

The 2014 Trophy-R was a serious performance machine with race-style Ohlins dampers, bigger front brakes and polycarbonate Recaro seats. With no air conditioning or radio, it’s more suited to track days than trips to Tesco.

As a statement of intent, launching a new hot hatch by setting a 7min 50.63sec Nurburgring lap time takes some beating. The bodykitted Civic really is as fast as its furious styling suggests.

Honda set its lap time with a car ‘in a standard state of tune’. However, it did admit removing ‘equipment such as air conditioning, the front passenger seat and audio equipment’ in order to ‘offset the additional weight of a full roll cage (installed specifically for safety reasons and not to add rigidity)’.

That brings us to the current Nurburgring record-holder: the VW Golf GTI Clubsport S. Built to mark 40 years of the Golf GTI, the 310hp hatchback has been dubbed ‘the GT3 of GTIs’.

The Clubsport S is even quicker than the four-wheel-drive Golf R and only 400 will be made. Thank a strict weight-saving diet, including a smaller battery, less sound deadening and no rear seats. Hey, nobody said giant-killing hot hatches had to practical.