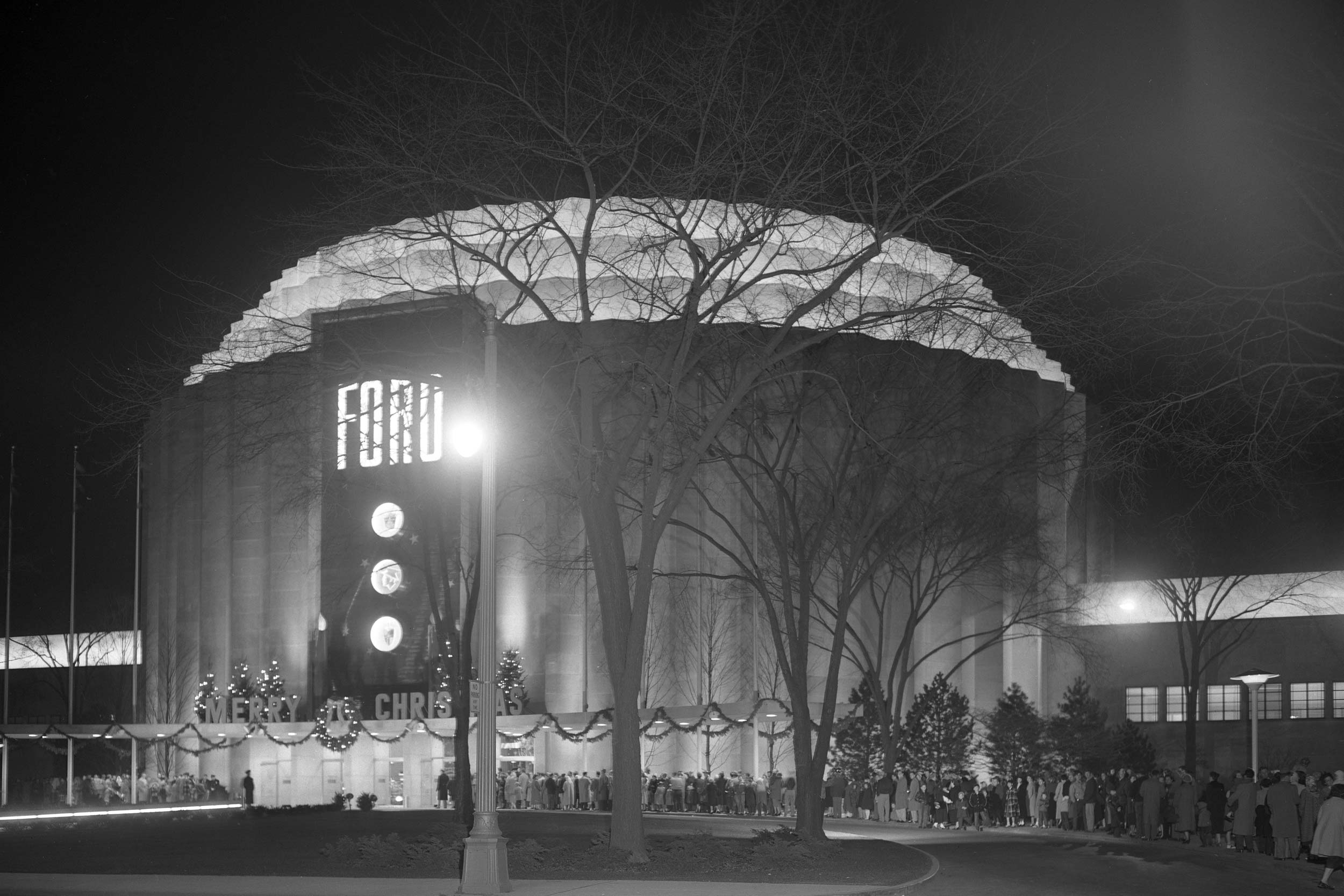 The Ford Rotunda was built for the 1934 World’s Fair in Chicago. It was later moved to Dearborn, Michigan, Ford’s home turf. It was an insanely popular tourist attraction and had even more visitors in the 1950s than the Statue of Liberty.

It was the home to Ford’s incredible “Christmas Fantasy” exhibitions, events that drew crowds from all over the country from 1953 to 1961.

Special thanks to Ford Motor Archives for sharing their heartwarming memories with us. 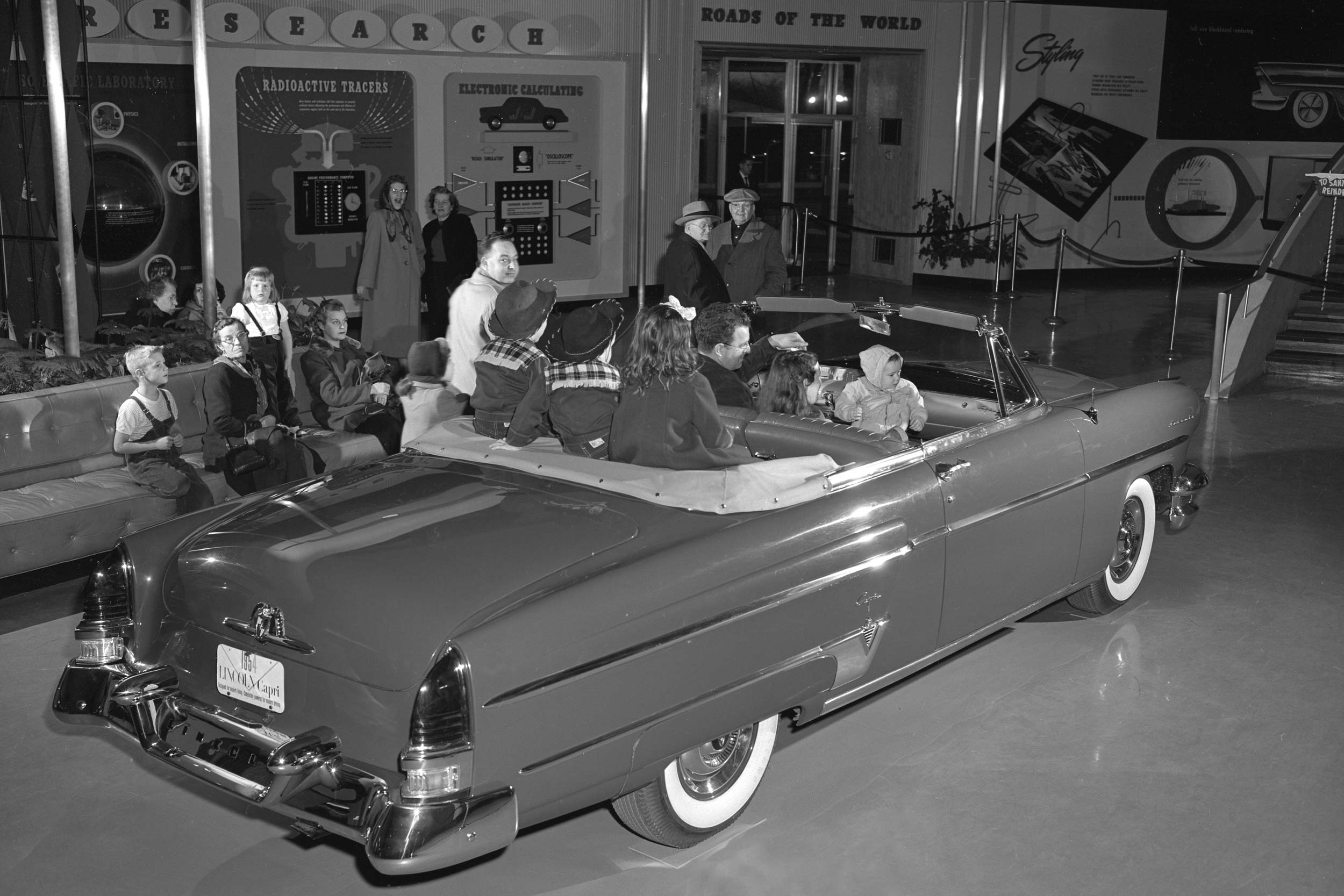 People are lined up to take a closer look at Lincoln’s utterly splendiferous 1954 Capri. So caught up in the Christmas spirit was FoMoCo that no one is telling the rugrats sitting on the stowed convertible top to keep their feet off the upholstery.

Note the “Radioactive Tracers” display on the upper left back wall. Perhaps that’s where Rudolph got his glow. 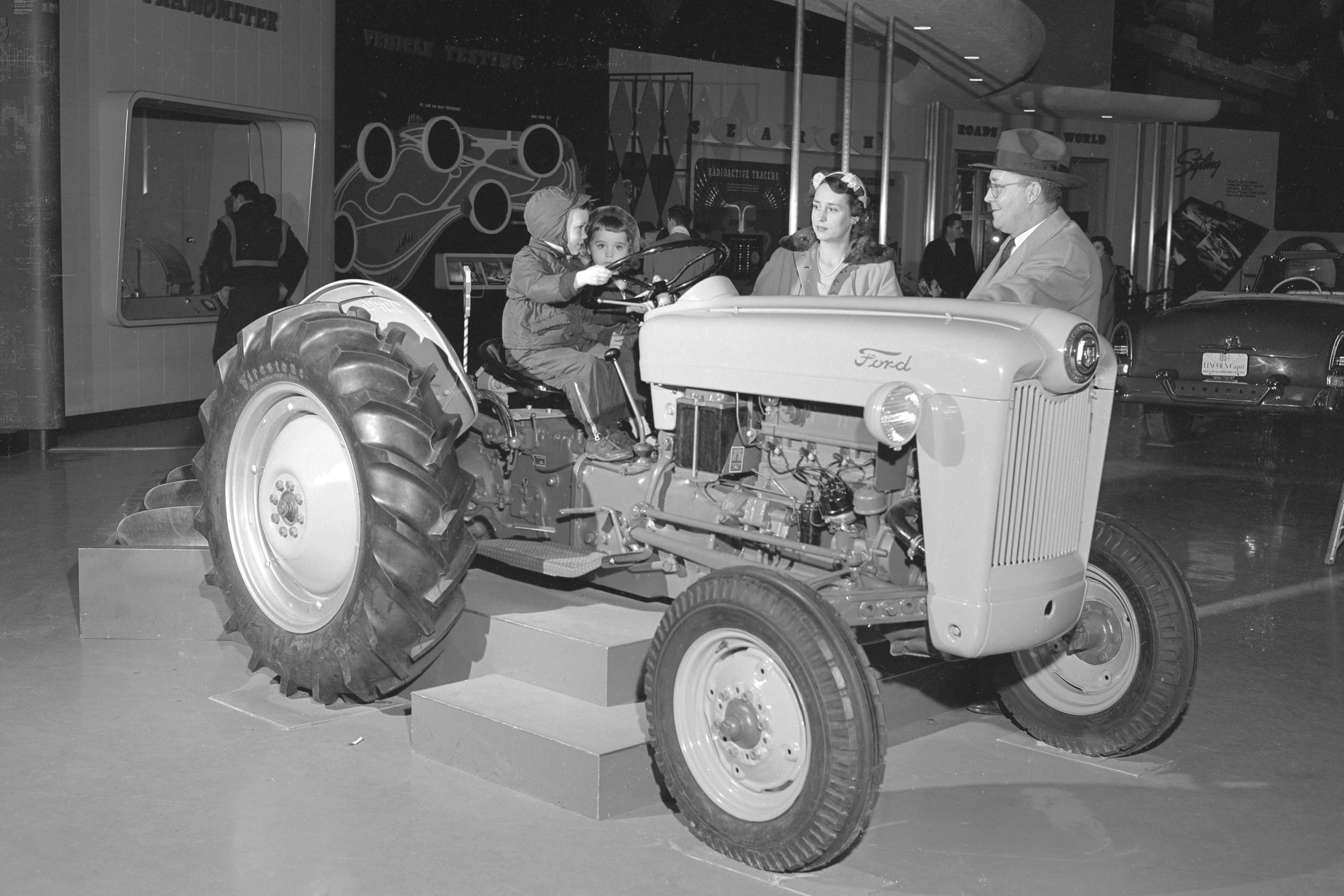 That mint condition agricultural beauty is a Ford NAA Tractor. The special badge on the nose celebrates Ford’s 50th birthday. 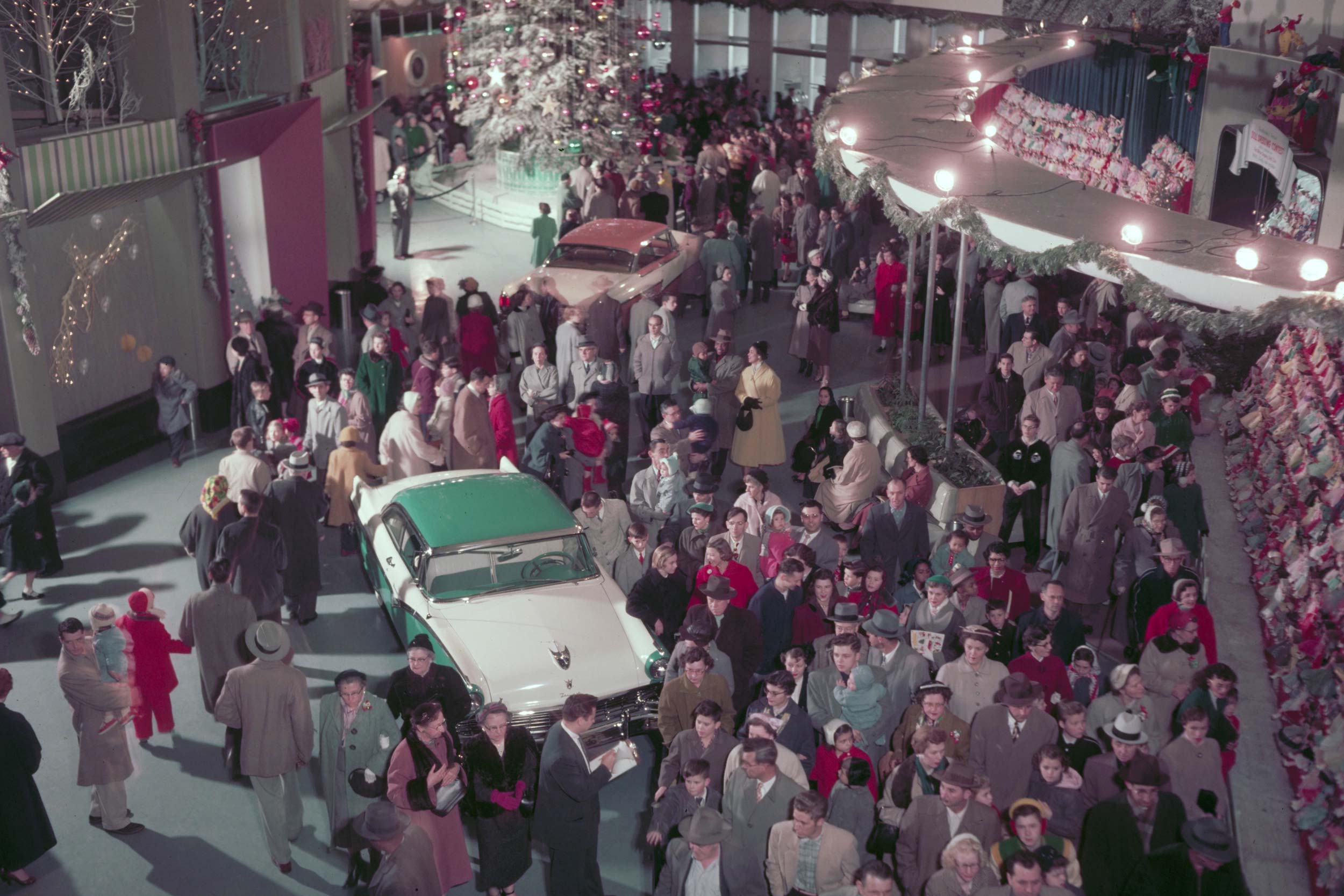 The crowd is looking around in wonder at the 1955 displays. In the foreground is a 1956 Fairlane Victoria in Meadowmist Green over Colonial White, and the Sunset Coral beauty behind it is a 1956 Mercury Montclair. *swoon* 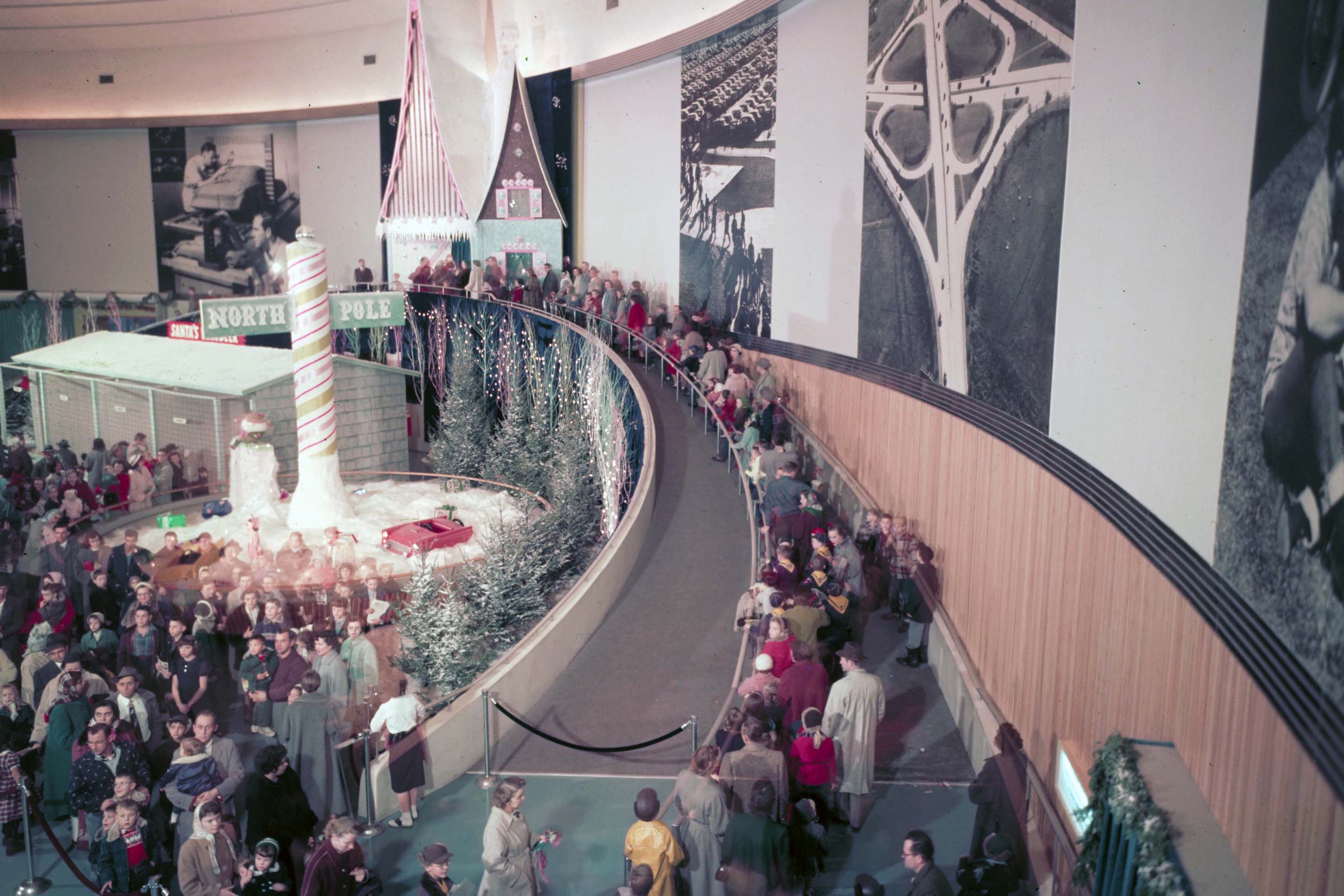 All these visitors are lined up to see Santa in his gingerbread house and tell him their Christmas wishes. We’ll give you a hint, Santa: we want a 1956 Ford Fairlane Victoria in Meadowmist Green over Colonial White. 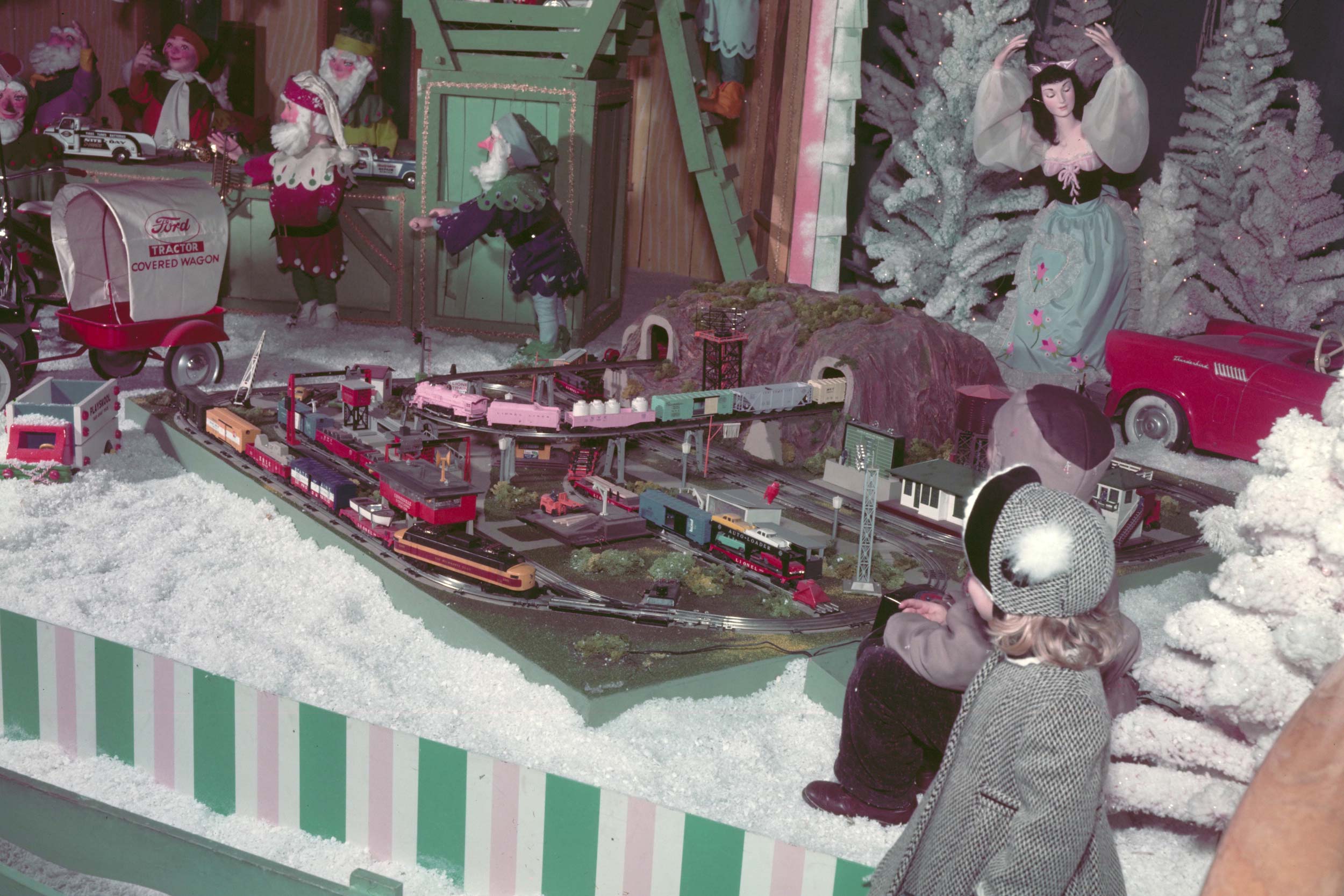 The children are looking at a 1955 Lionel Girl’s Train Set, on top in pink, and what looks to be a 1955 New Jersey Central set below that.

No matter how much you may love or hate that pink train, it’s worth the price of an actual train today. 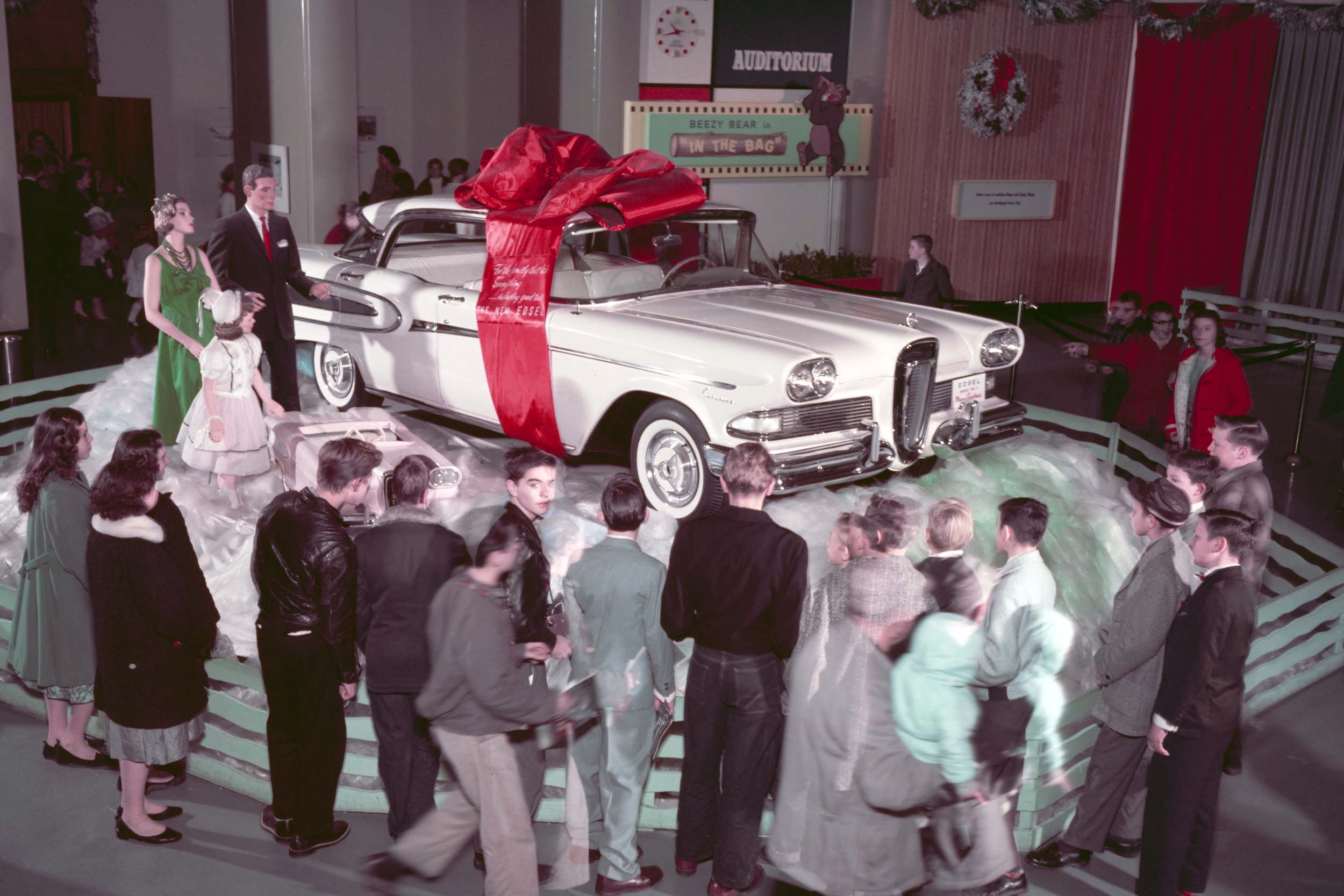 The ribbon reads, “For the family that has everything, including good taste! The new Edsel!”

The reindeer collar grille was an instant turnoff to most buyers. Perhaps the designer had too many rein-beers.

The 1960 Edsel was fairly handsome, but by then interest in the model had wrapped up. 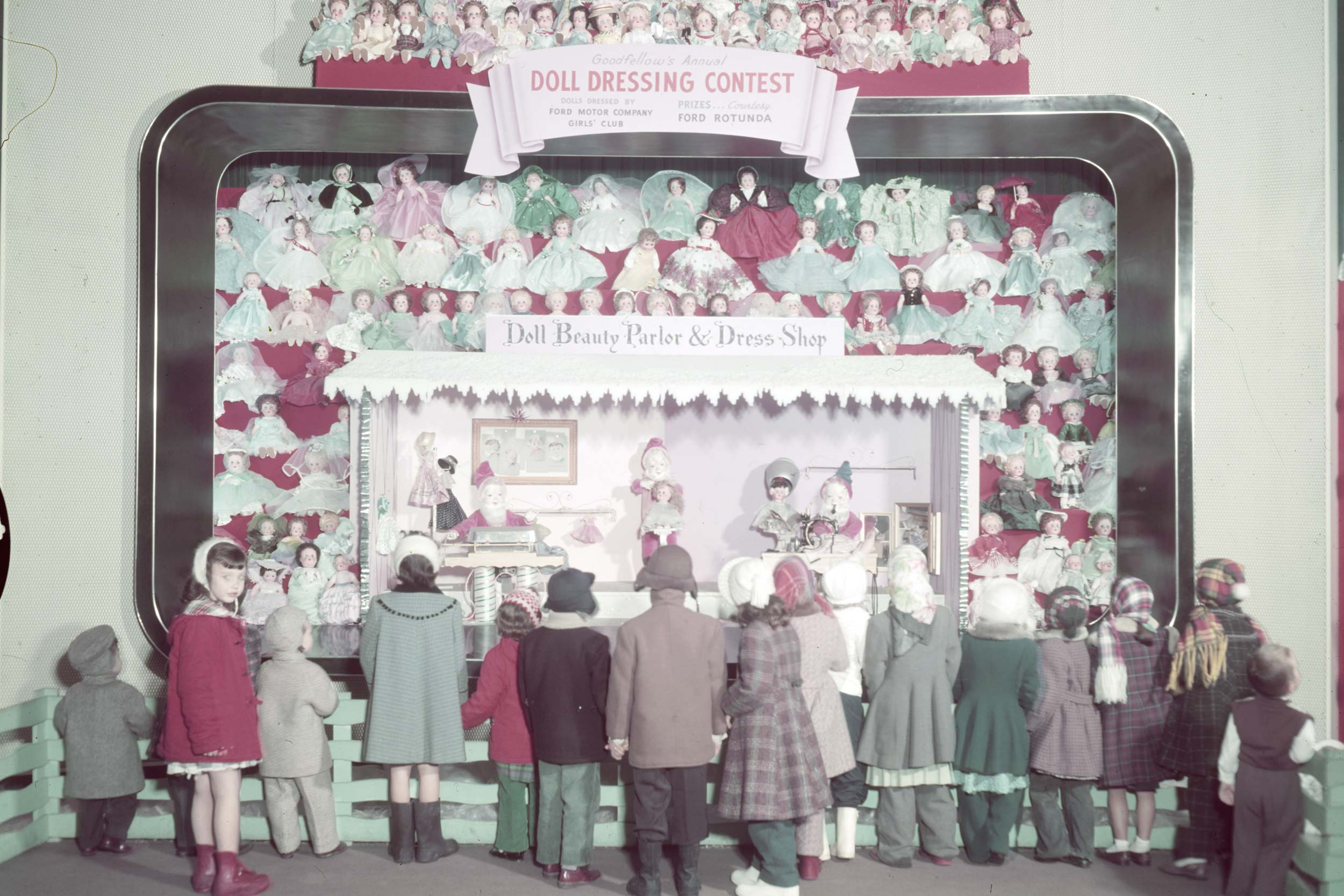 The elves in the display are merrily dolling up the dolls for their Christmas morning debut. The dolls—over 2,000 of them—were dressed by members of the Ford Girls’ Club and later given to underprivileged children.

The girl looking back at the camera in the lower right knows what’s up, though: that 2,000 dolls staring at you is worse than coal in your stocking. 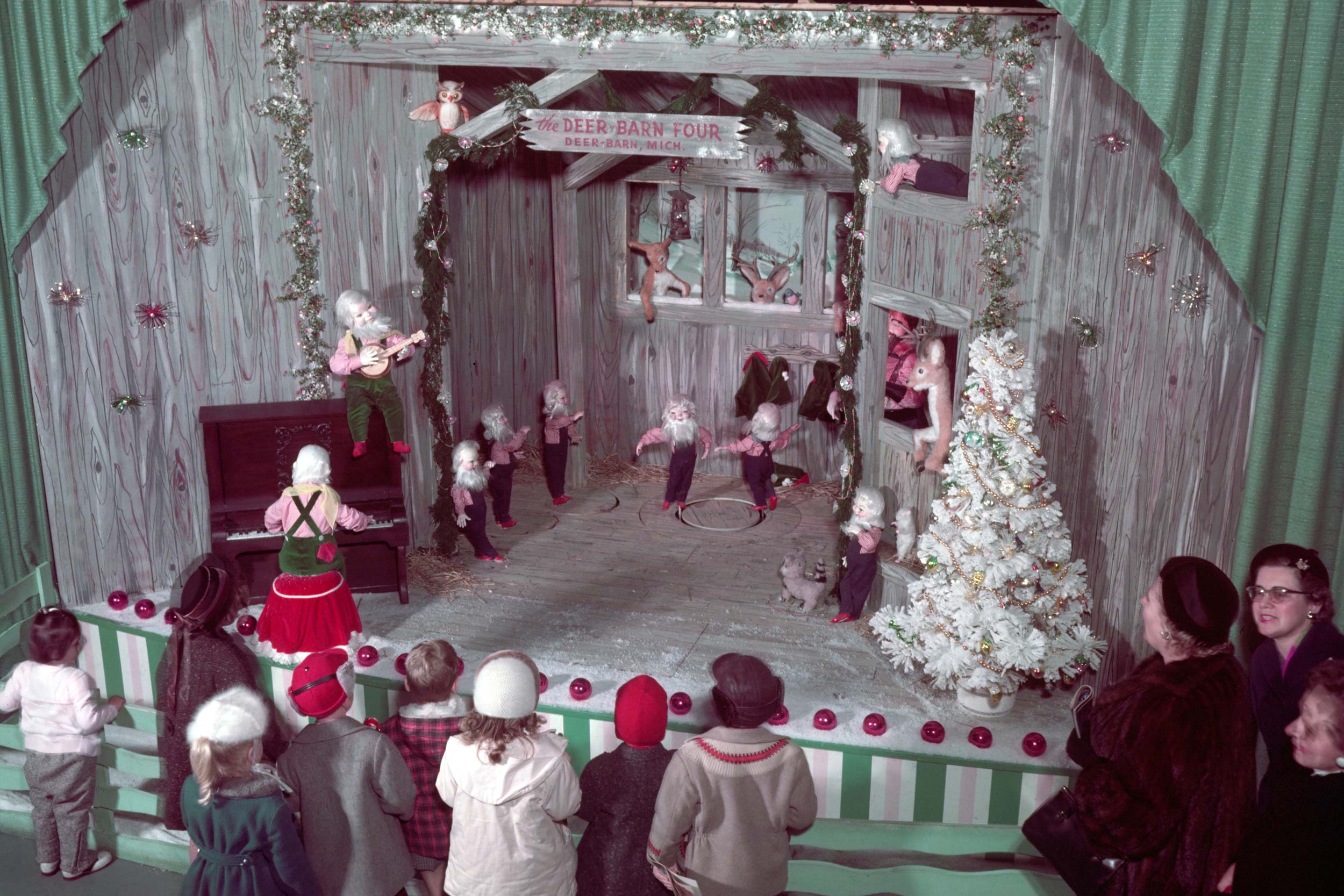 Get it? Get it?! “Deer-Barn,” like Ford’s hometown of Dearborn but with a punny Christmas twist. Ho! Ho! Ho! That joke sleighed them at the North Pole.

And even more animatronic elves. Super not scary at all. 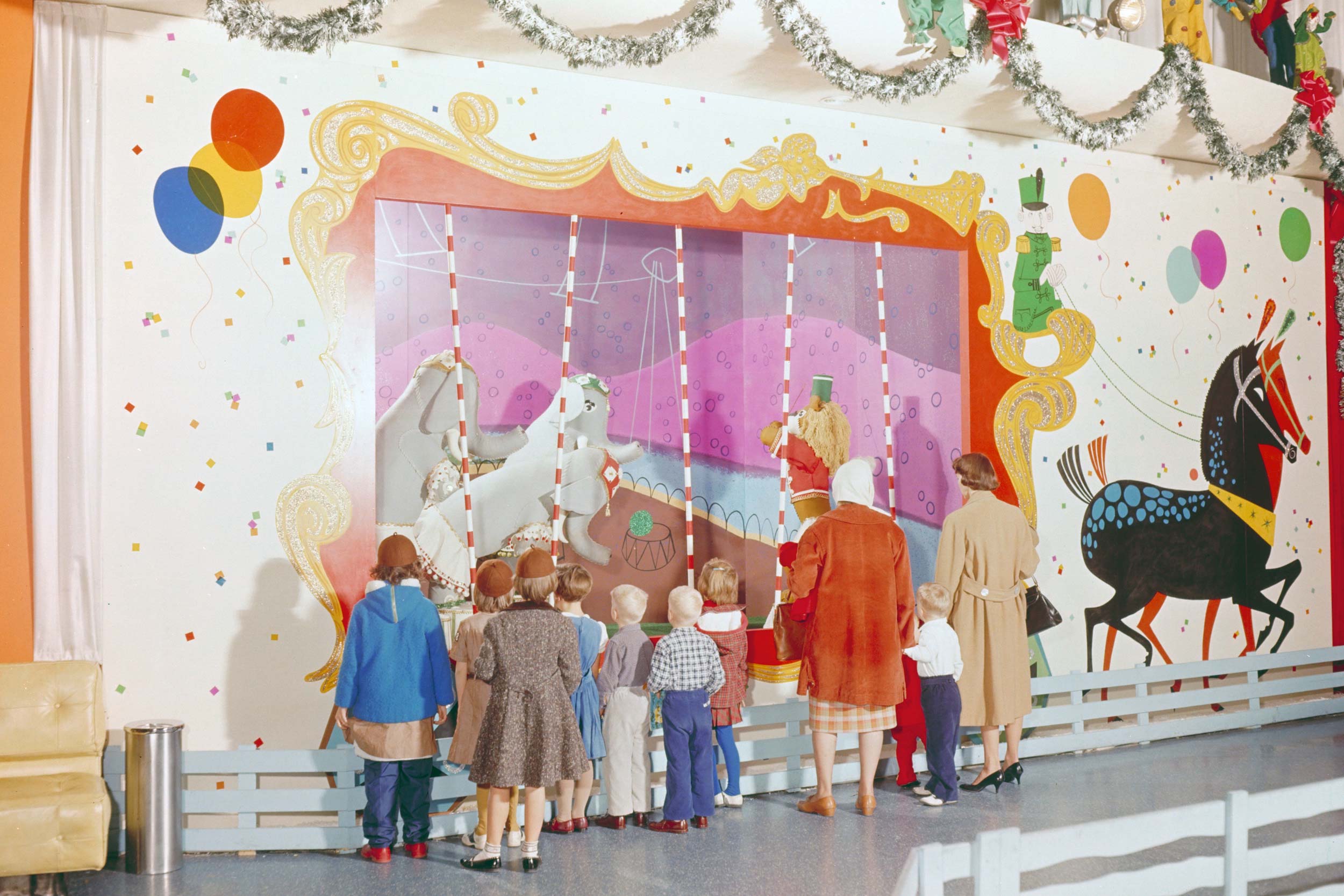 Brownie Girl Scouts watch a lion ringmaster and performing elephants at the circus. 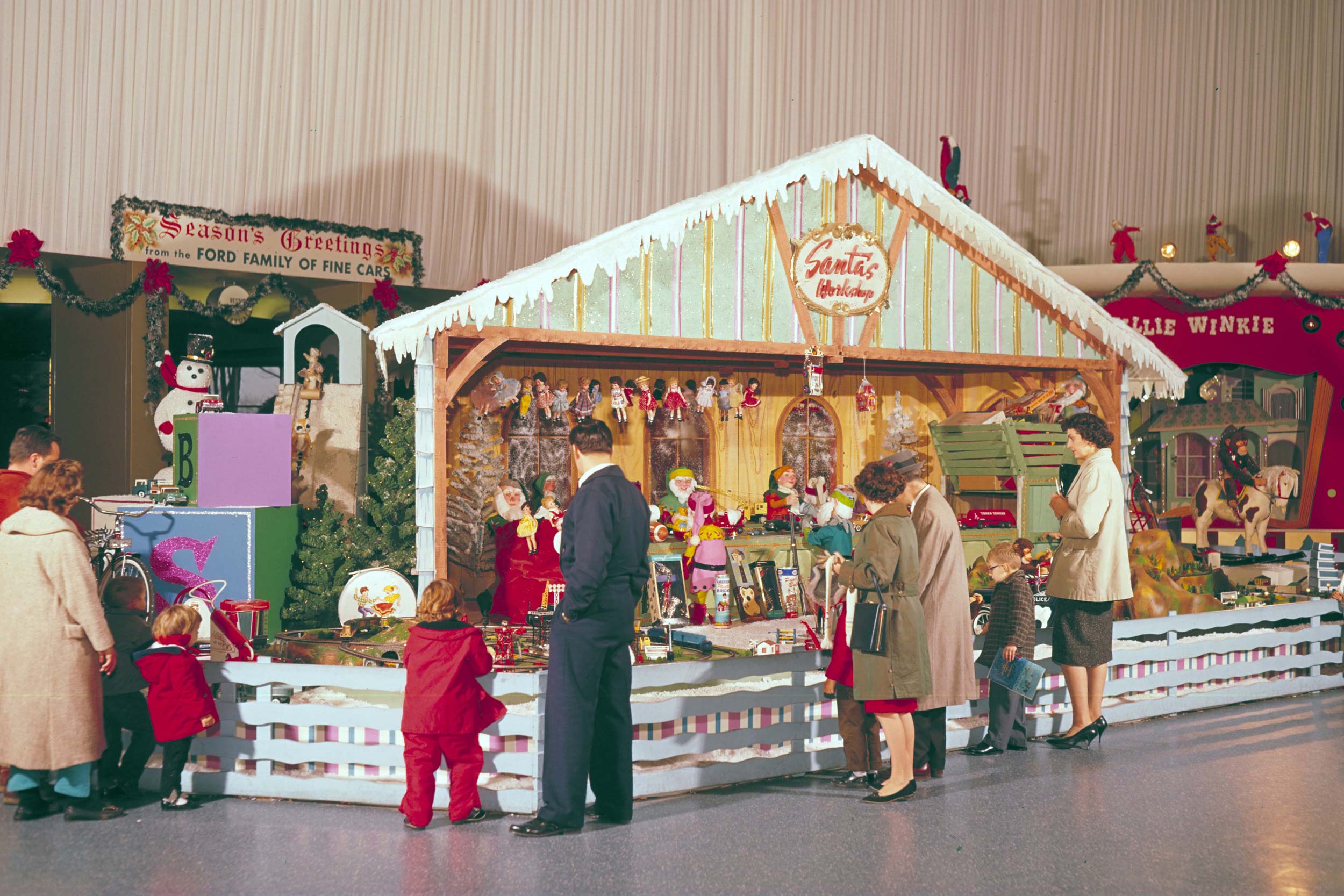 The UAW elves are working overtime to make sure the children’s presents will be ready for Christmas morning. The cylindrical tin underneath the pink elf in the center is a container of American Plastic Bricks, by Elgo. Santa may have a copyright lawsuit on his hands. 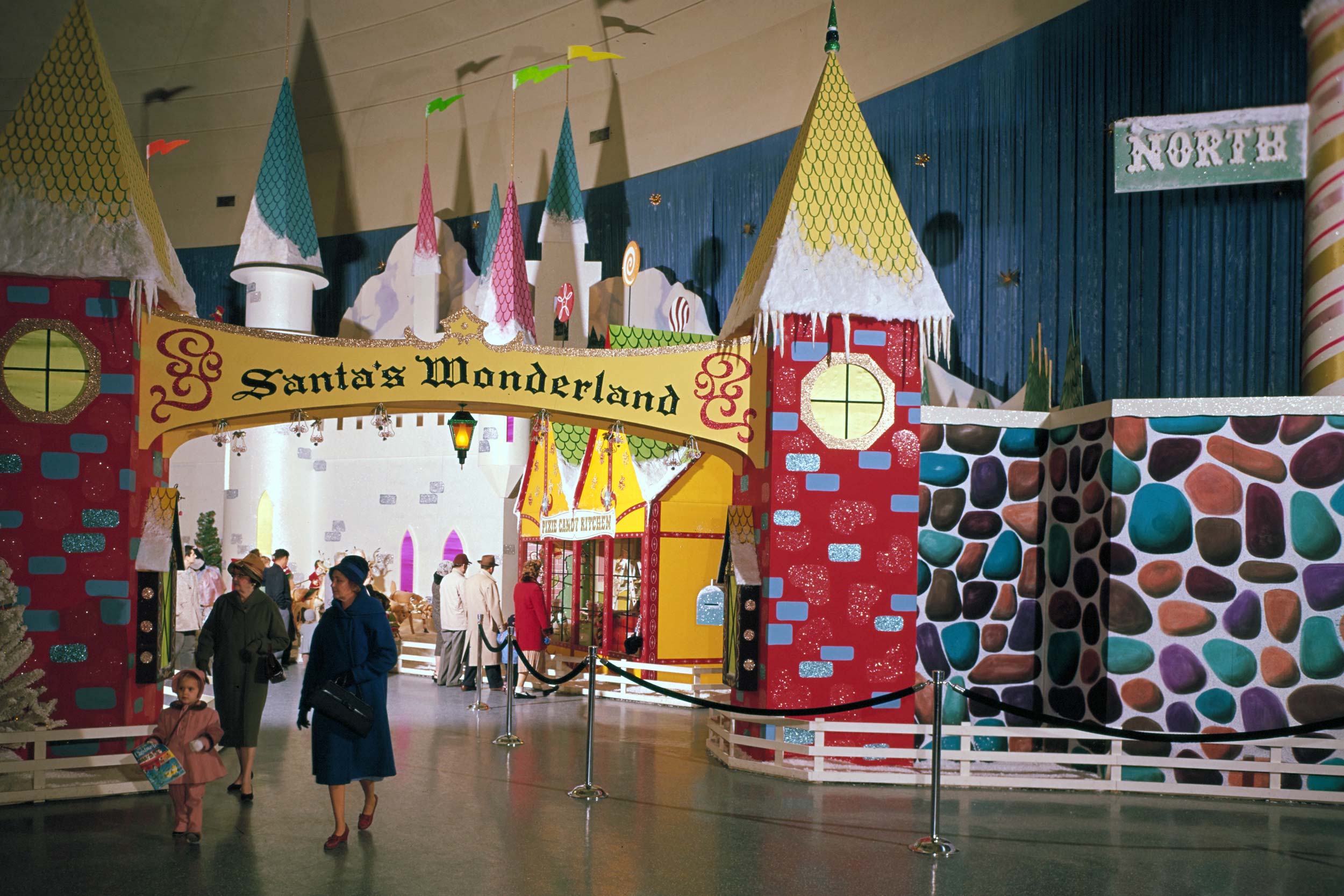 Over the years, the size, number, and ornate detail of the displays increased. The massive size and increasingly complex construction is astounding. 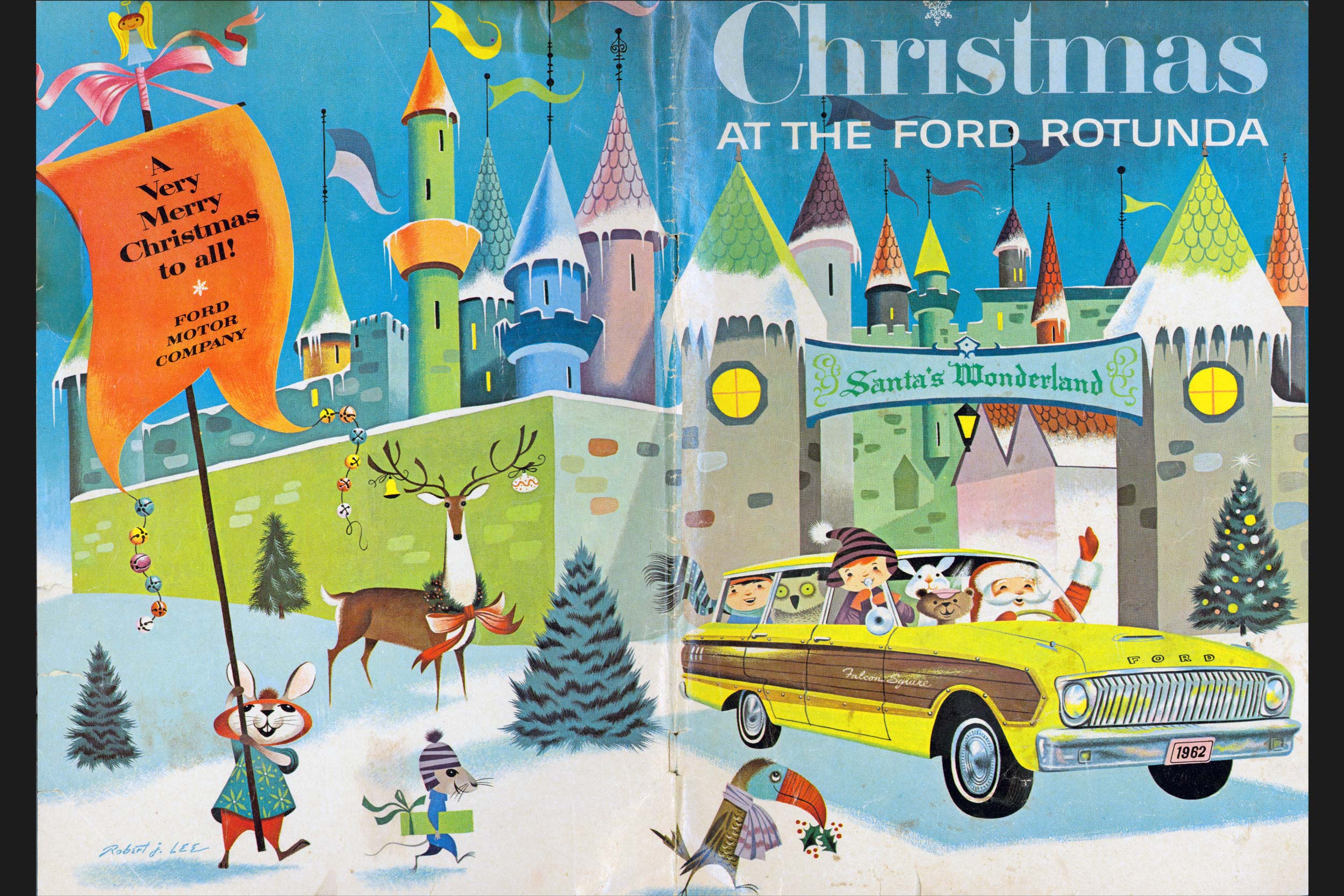 On the cover of the 1961 Christmas Fantasy souvenir coloring book, Santa drives out of his Wonderland in a 1962 Ford Falcon Squire. The wood panelling really spruces up the look of the car. 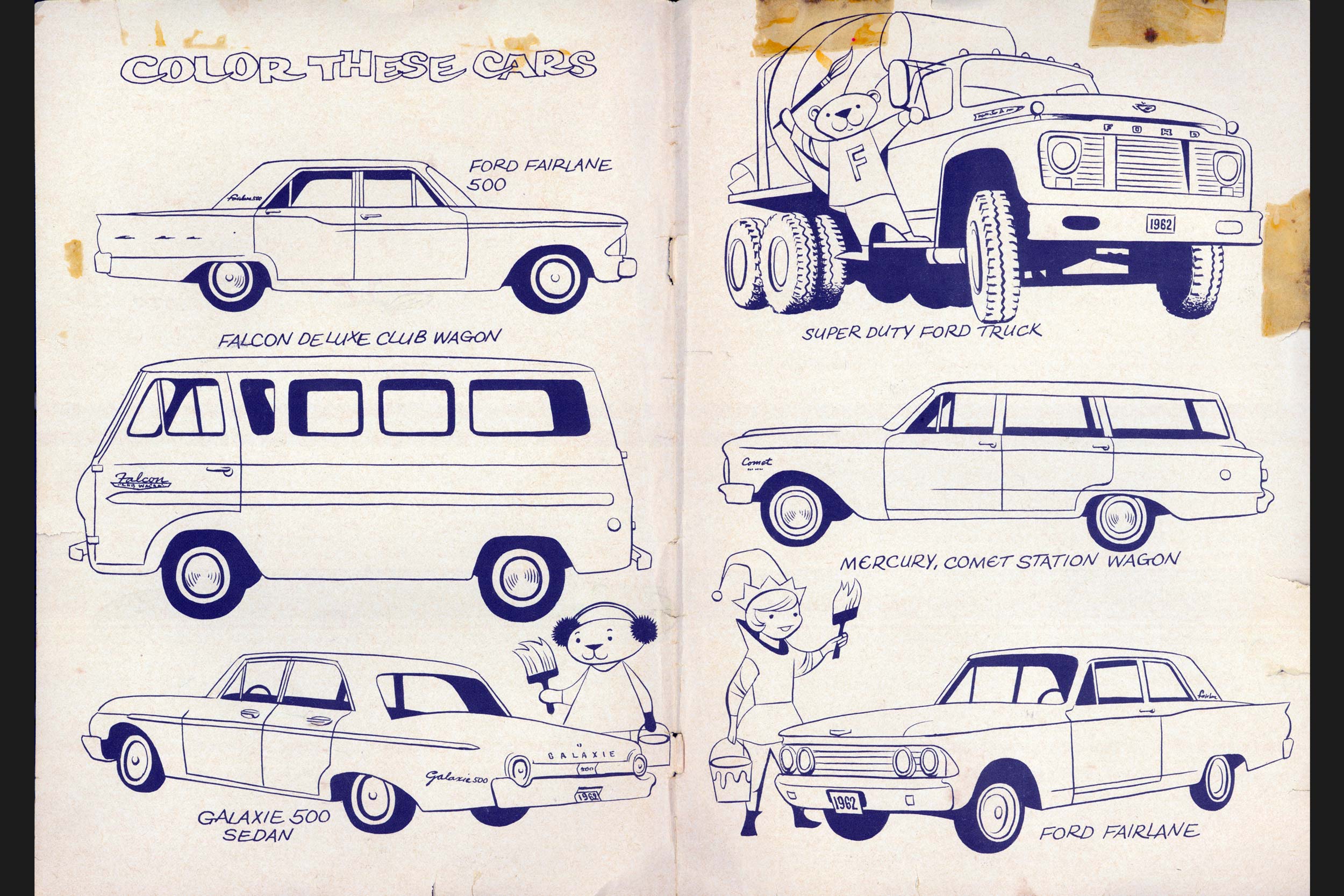 The interior of the coloring book is a gearhead nerd’s dream garage. The Falcon Deluxe Club Wagon shown (the van) had a scant 90-inch wheelbase and could easily zip around in tight city traffic. 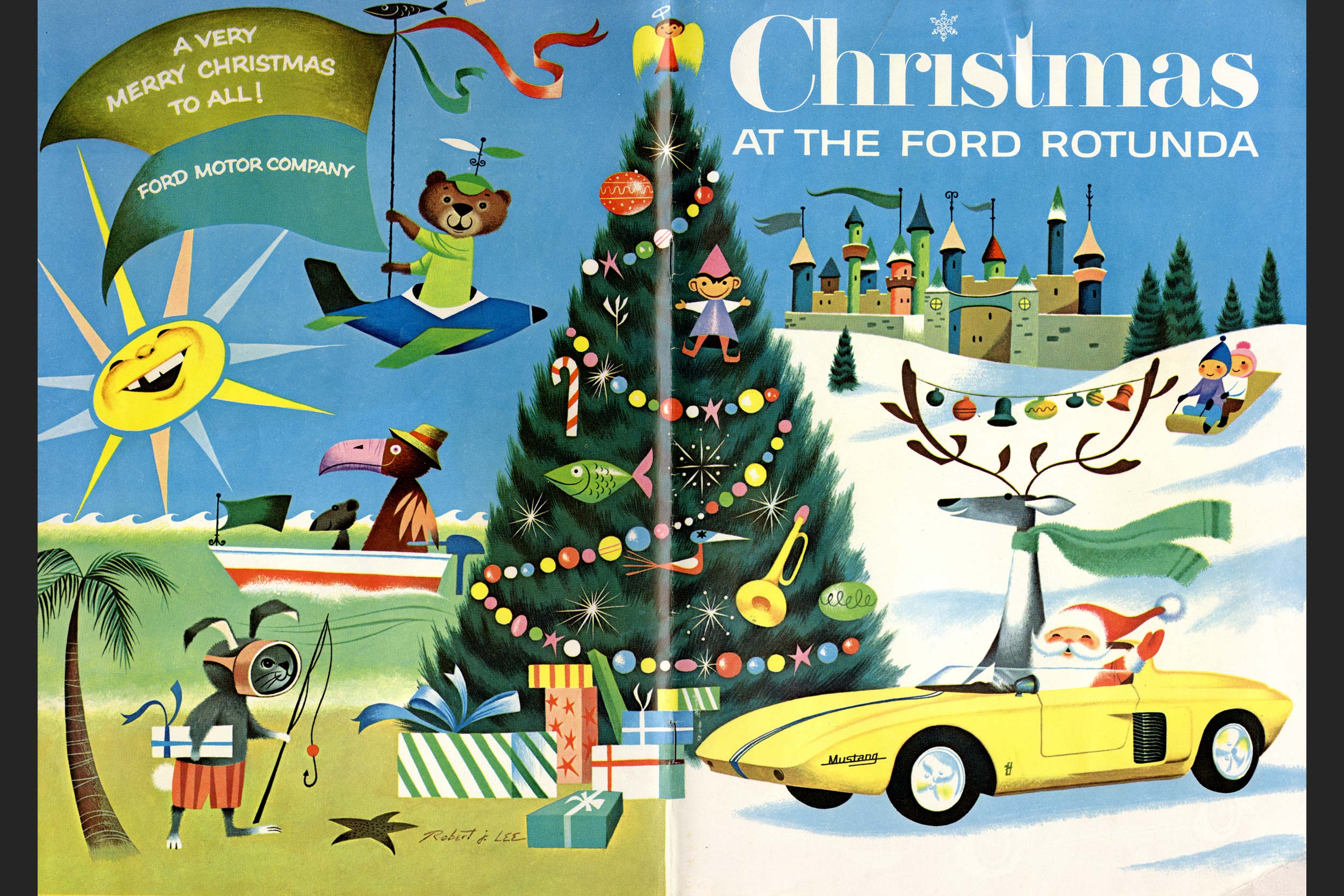 This cover of the 1962 edition has Santa behind the wheel of the Mustang 1 concept car, which made its public debut at the U.S. Grand Prix on October 7, 1962.

With only one hand on the wheel, his passenger is forced to hang on for deer life. 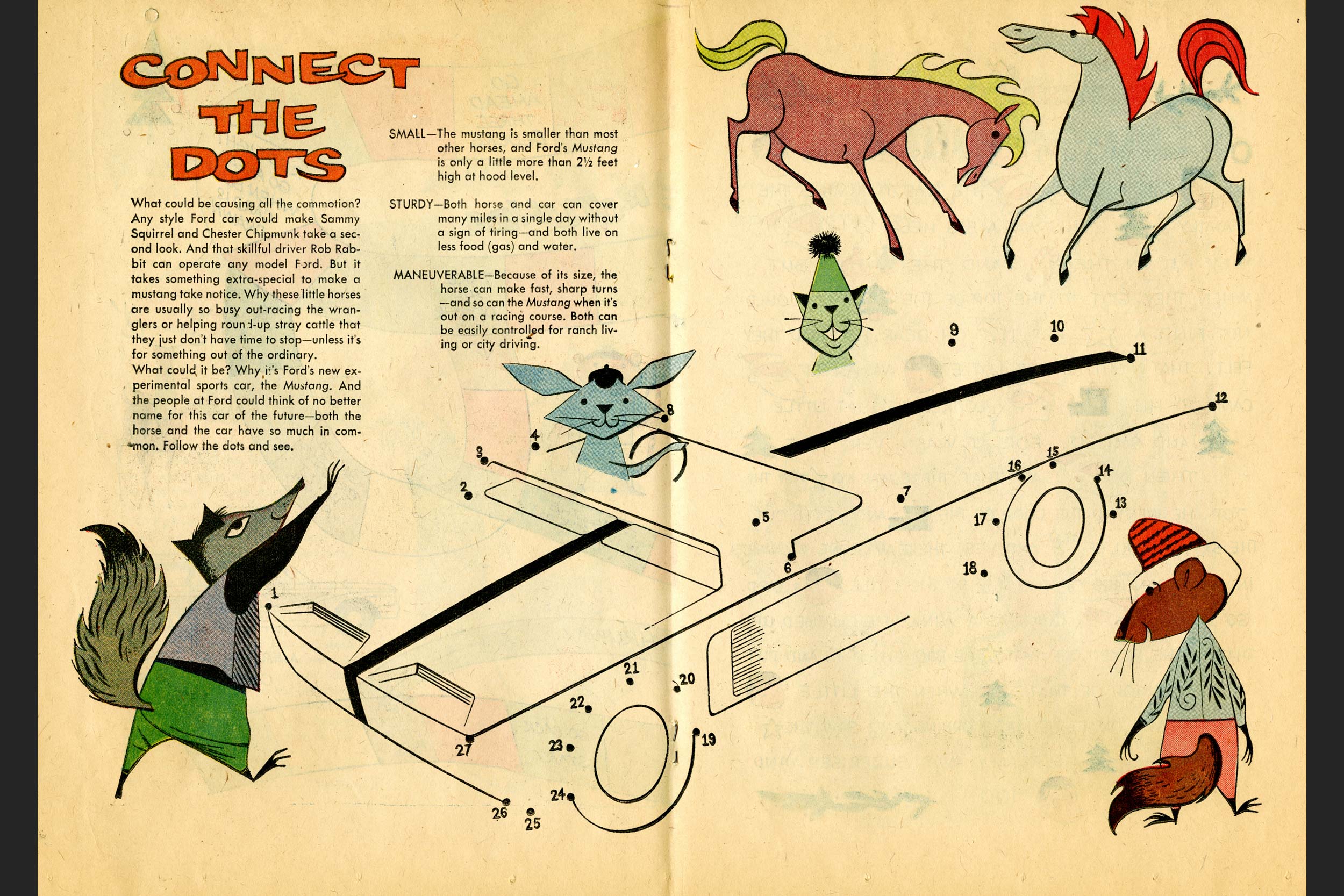 The interior of the coloring book has a Mustang 1 connect-the-dots puzzle.

Sadly, the Ford Rotunda caught fire on the afternoon of November 9, 1962. The alarm rang at 1:12 p.m. At 1:55 pm, the walls collapsed and the Rotunda was destroyed.