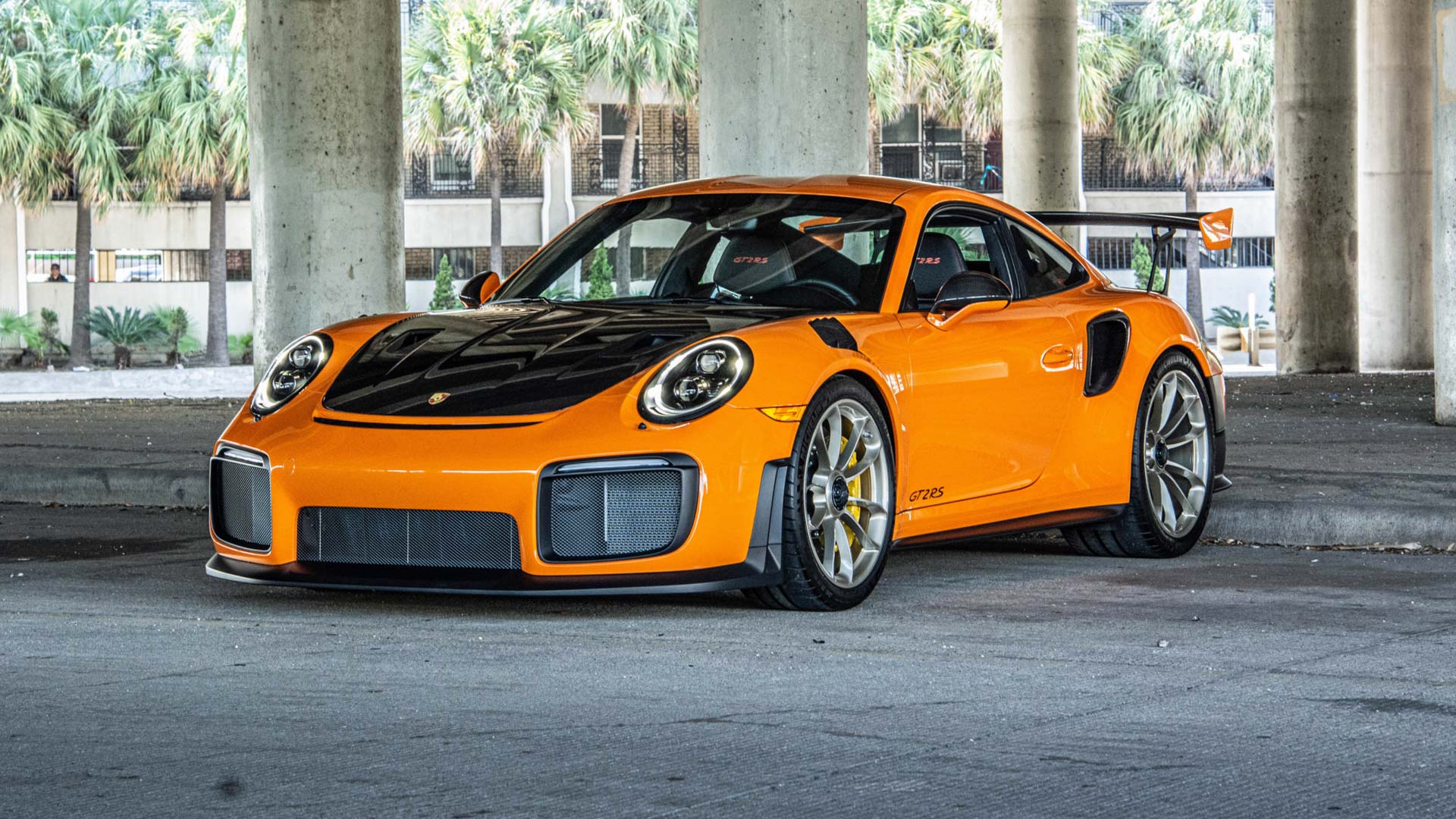 Auction website Bring a Trailer currently has one of the most hardcore Porsche 911 models ever made for sale.

Offered as part of the website’s Premium listing service, the 2018 911 GT2 RS certainly makes a statement with its custom orange paintwork.

However, most shocking of all is that this example has registered only 170 miles on the odometer since leaving the Porsche factory. 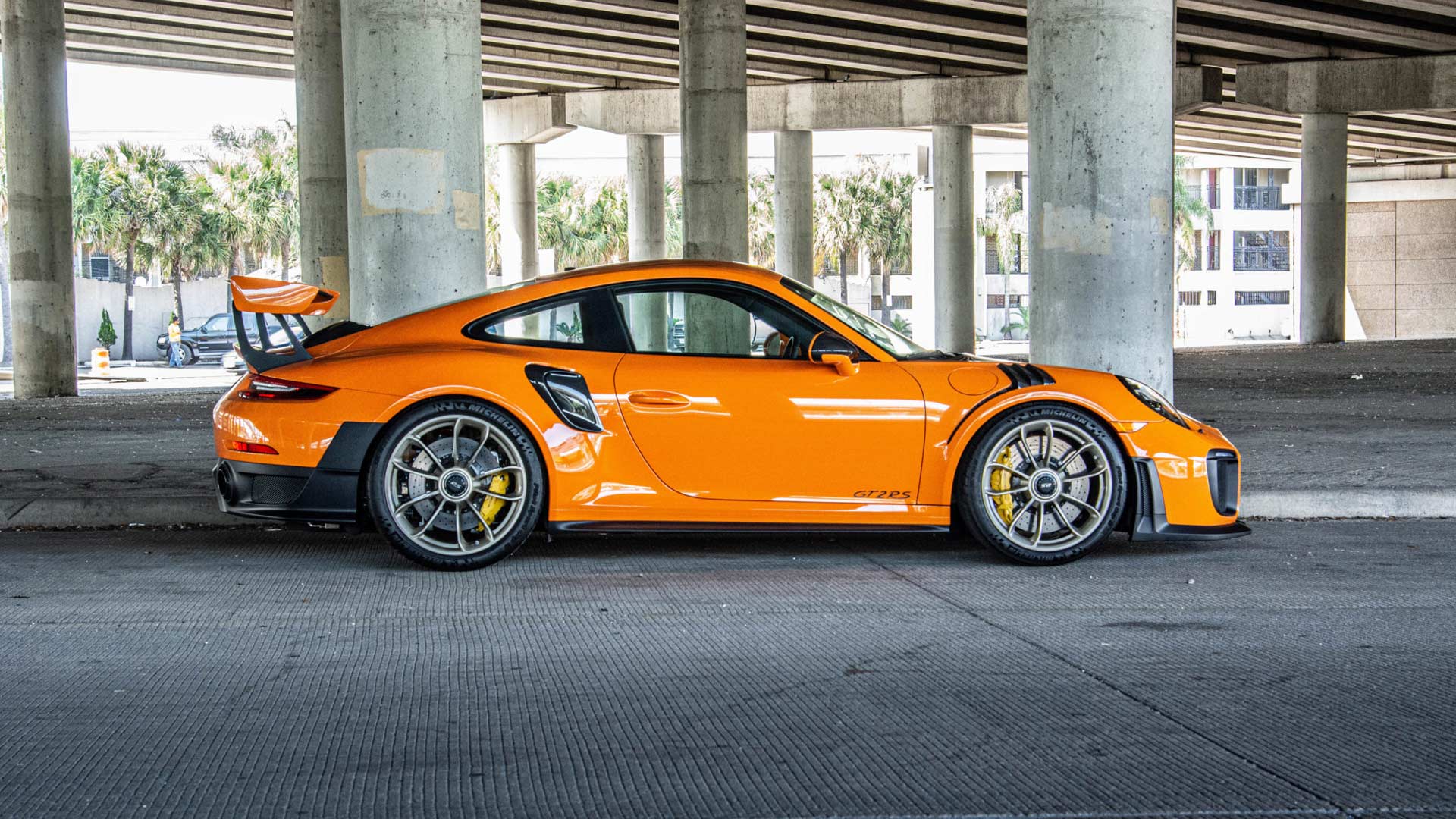 Porsche 911 GT2 models have developed a reputation for scaring inexperienced drivers. Big turbocharged power, combined with a rear-wheel drive setup, has the potential to catch out the unwary.

The 996-generation model, made between 2002 and 2004, is often cited as the most fearsome example. Yet modern developments have made later GT2 models less terrifying, but still deserving of respect.

The car being sold here is a later 991 version. Initially unveiled in a trailer for the Forza Motorsport 7 Xbox One game, Porsche fans had a chance to see a real 911 GT2 RS at the 2017 Goodwood Festival of Speed.

More power than any other street-legal 911 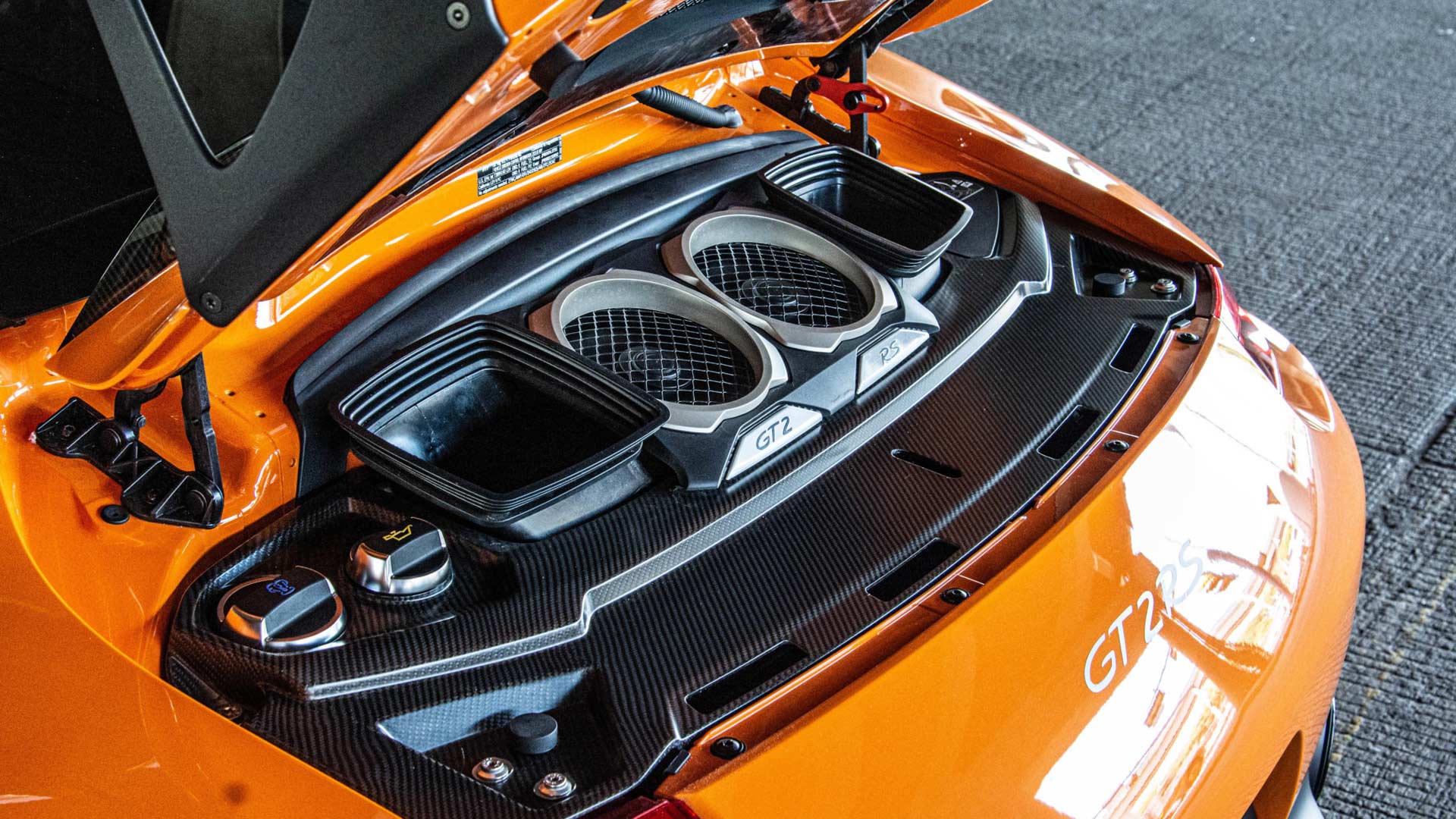 What made the 991-gen GT2 RS most impressive was the power output from the twin-turbocharged 3.8-liter flat-six engine. A total of 700 horsepower made it the most powerful road-going 911 ever made, and was accompanied by 553 lb-ft of torque.

Porsche fitted an automatic water spray system, fed by a tank mounted inside the front trunk, to help reduce the temperature of the air entering the intercoolers.

A clockwork orange on the track 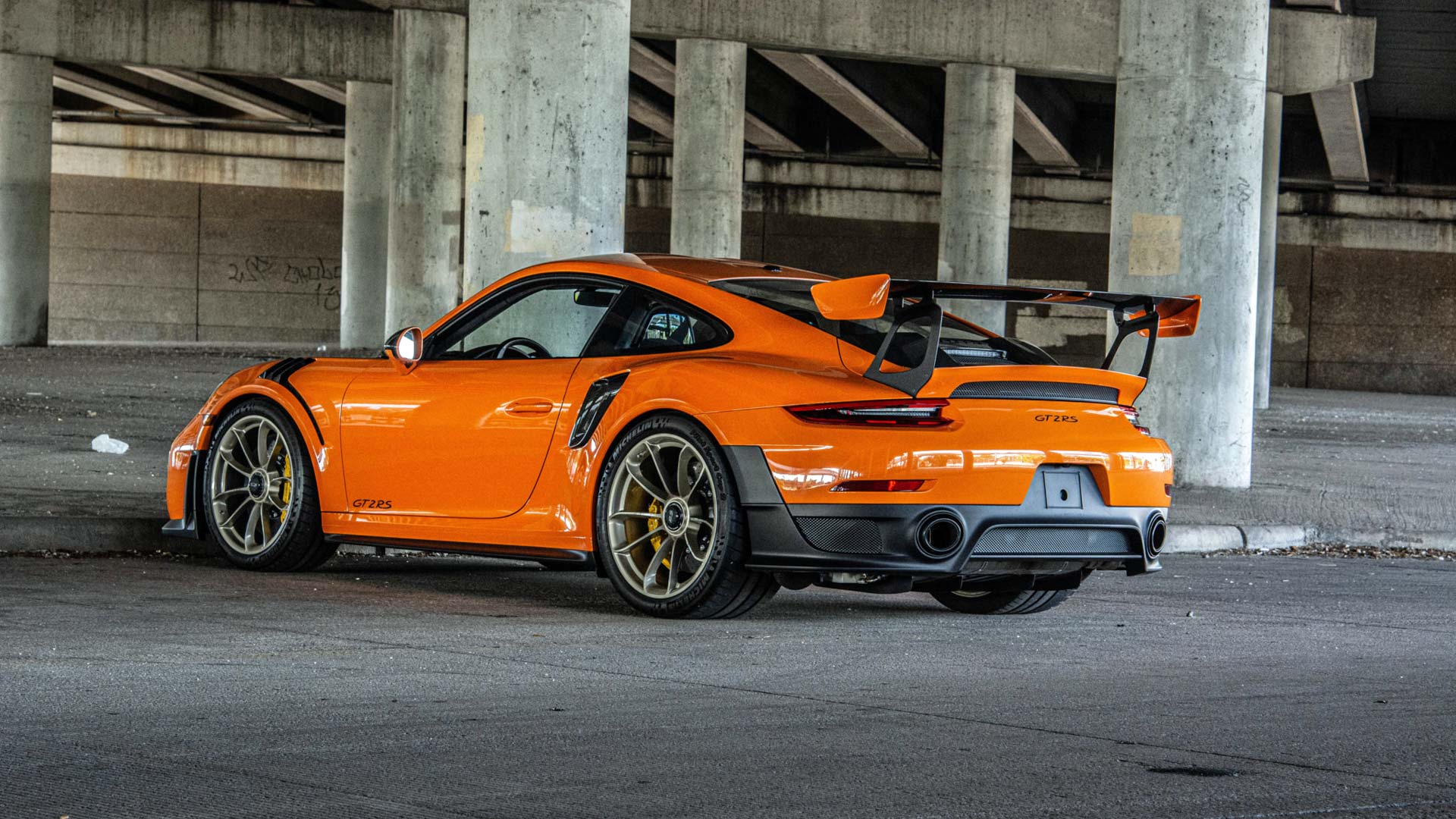 Porsche used carbon fiber was extensively on the body of the GT2 RS. The front wings, hood, exterior mirrors, rear vents, and other parts were all made from the lightweight material. A titanium exhaust, polycarbonate windows, and even a roof made from magnesium also helped shed unnecessary pounds.

Porsche Ceramic Composite Brakes cope with stopping the GT2 RS, with adjustable suspension and Michelin Pilot Sport Cup 2 rubber keeping it on the road. The center-lock alloy wheels are 20-inch items at the front, and 21-inch in size on the rear axle.

The combination of power and low weight has helped the 911 GT2 RS set numerous lap records at race circuits. This has included the Nurburgring Nordschleife, Road Atlanta, and Road America.

Just as orange on the inside, too 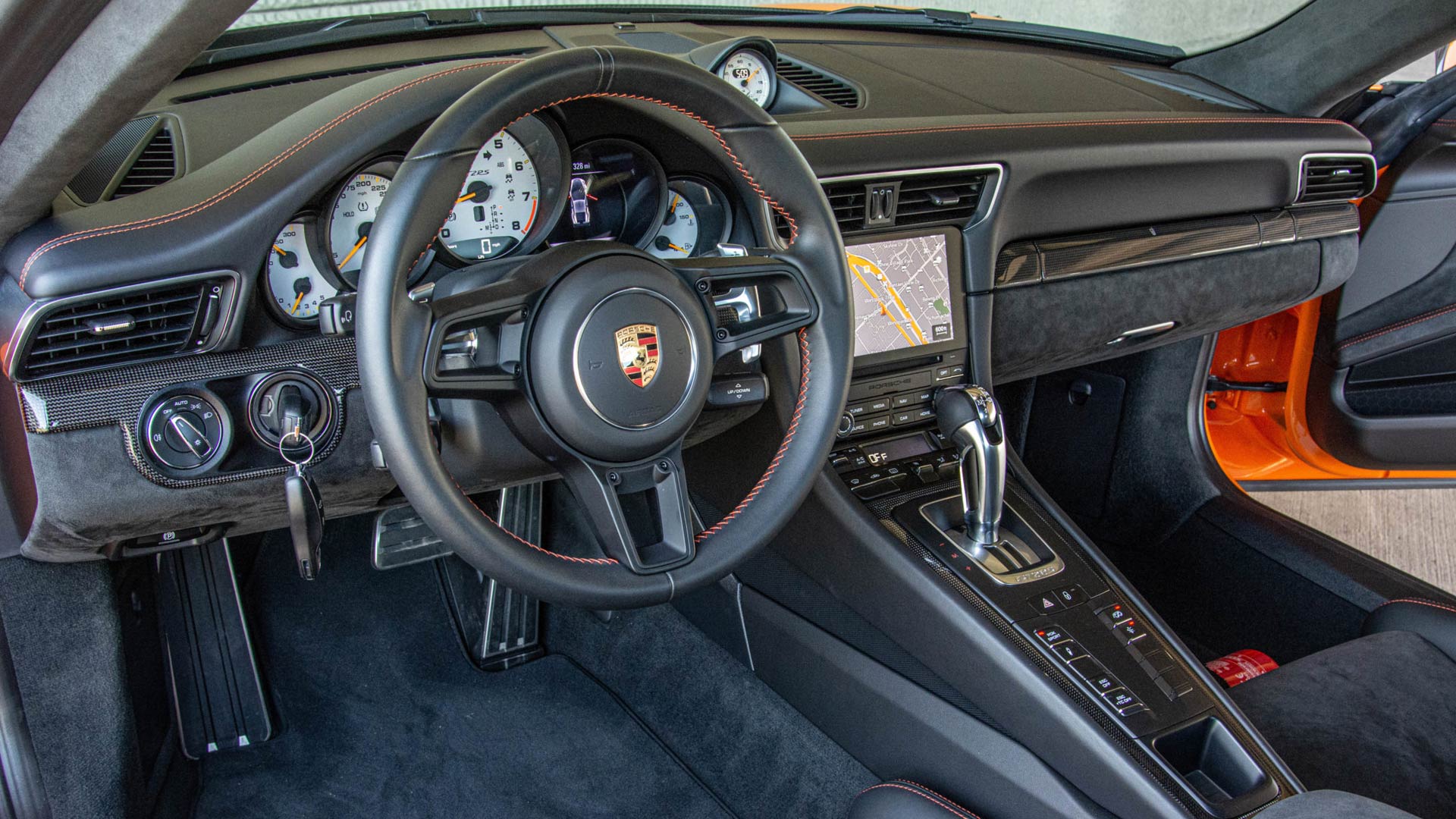 The original purchaser of this GT2 RS paid more than $322,000 for the car, including $12,380 on the custom Pastel Orange exterior paint color. A leather and Alcantara interior cost $3,480, whilst custom orange stitching added an extra $3,500.

A larger fuel tank, front axle lifting system, and a fire extinguisher were some of the additional factory options specified.

With only 170 miles shown on the digital odometer wear on the car is minimal, with an annual service performed in August 2019. The seller notes that the GT2 RS has never been on a race track. 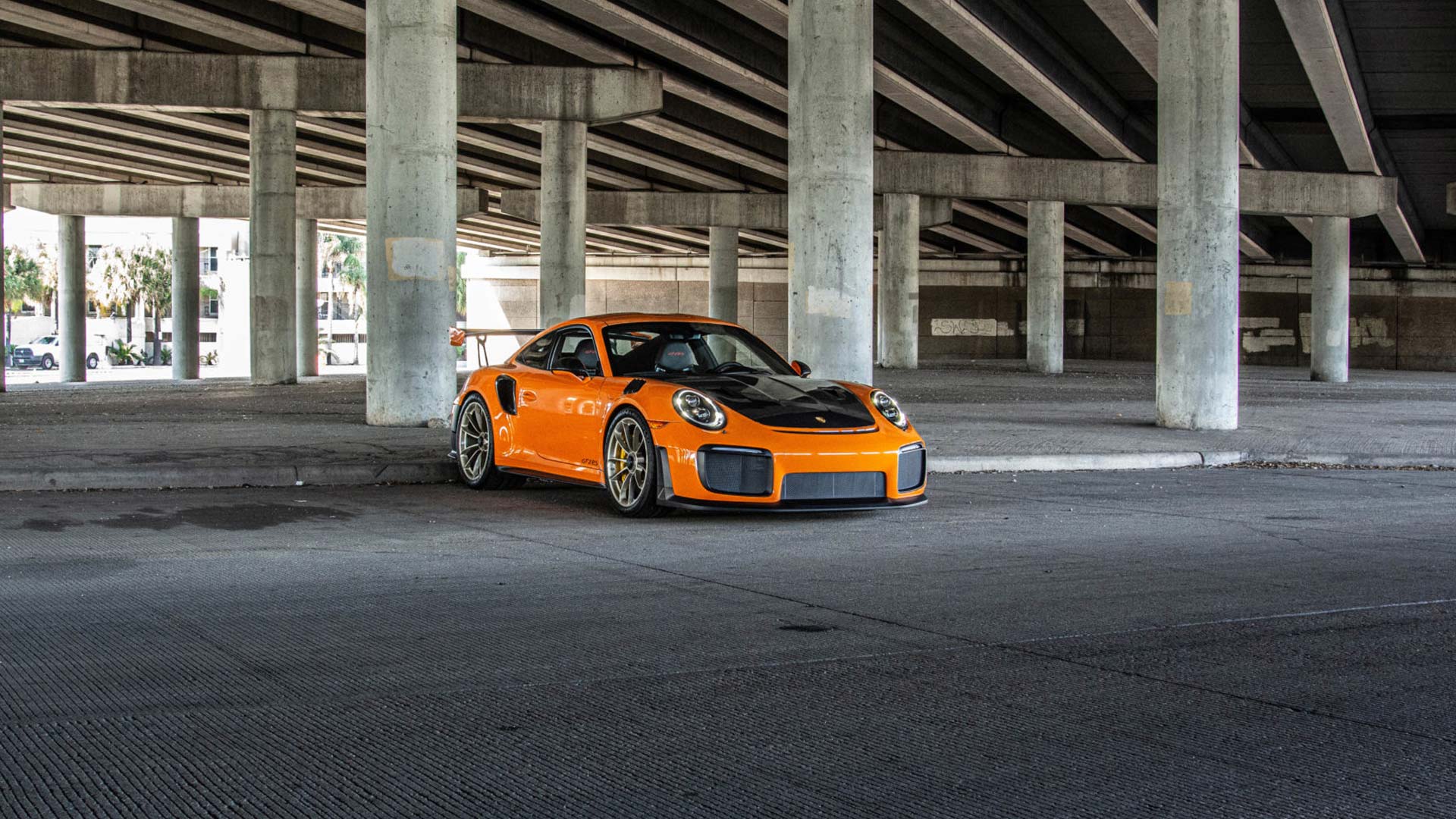 Porsche planned to produce only 1,000 examples of the 991-gen GT2 RS. A shipping accident that saw four cars destroyed did see the company briefly restart production.

It means that the ultimate GT2 RS and, for now, the most powerful Porsche 911 remains a relatively rare car. With this example virtually unused, it offers a second chance for a buyer who missed out originally.

The Bring a Trailer auction has already seen several large bids placed, ahead of it closing on Thursday, May 7th. For many commenters, the big question is whether a new owner will add more miles to this extreme Porsche.

Vector W8 Twin Turbo: you could own America’s craziest supercar

Tech company to help autonomous Porsches see in the dark