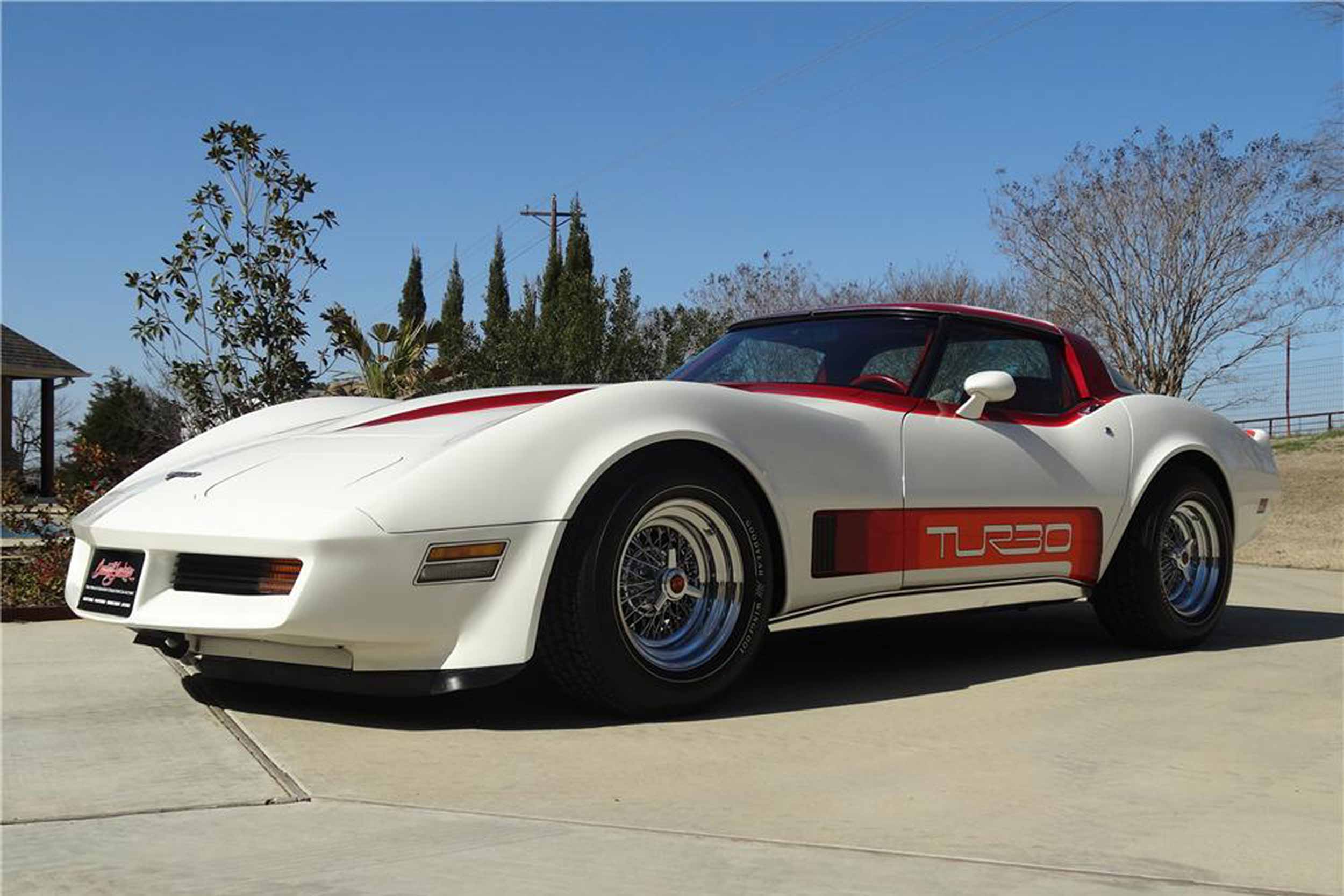 EDITOR’S NOTE: Before we begin, it’s important to clarify that at no point in time was the car in question misrepresented, neither by H&H Auctions nor Barrett-Jackson.

A 1980 Chevrolet Corvette Turbo coupe recently crossed the block at what is undoubtedly most British-sounding event of all time, the Imperial War Museum Duxford Motor Car Auction. The Corvette was offered by H&H Auctions and had an estimated price of $18-$25,000 USD, but did not sell.

The car in question is a C3 ablaze with fantastically 1980s “TURBO” decals on both doors. Pictures of the engine bay show that yes, there is indeed a turbo hooked up to a 5.7-liter V8.

Chevy never offered a turbo Corvette. The car’s description says that “The limited edition model’s creation involved the father of the Vette, Zora Arkus Duntov” and that it was made by American Custom Industries (ACI) in Sylvania, Ohio.

The Duntov Turbo Corvette offered by ACI had a widebody kit, non-retractable square headlights, splashy Duntov decals on the fenders, and, probably the main point of identification, was a convertible.

To be clear: H&H in no way misrepresented this car. The respected company presented an interesting rarity, provided a complete description, and appropriately estimated the price.

Just what in Zeus’ name is a non-Duntov turbo Corvette? 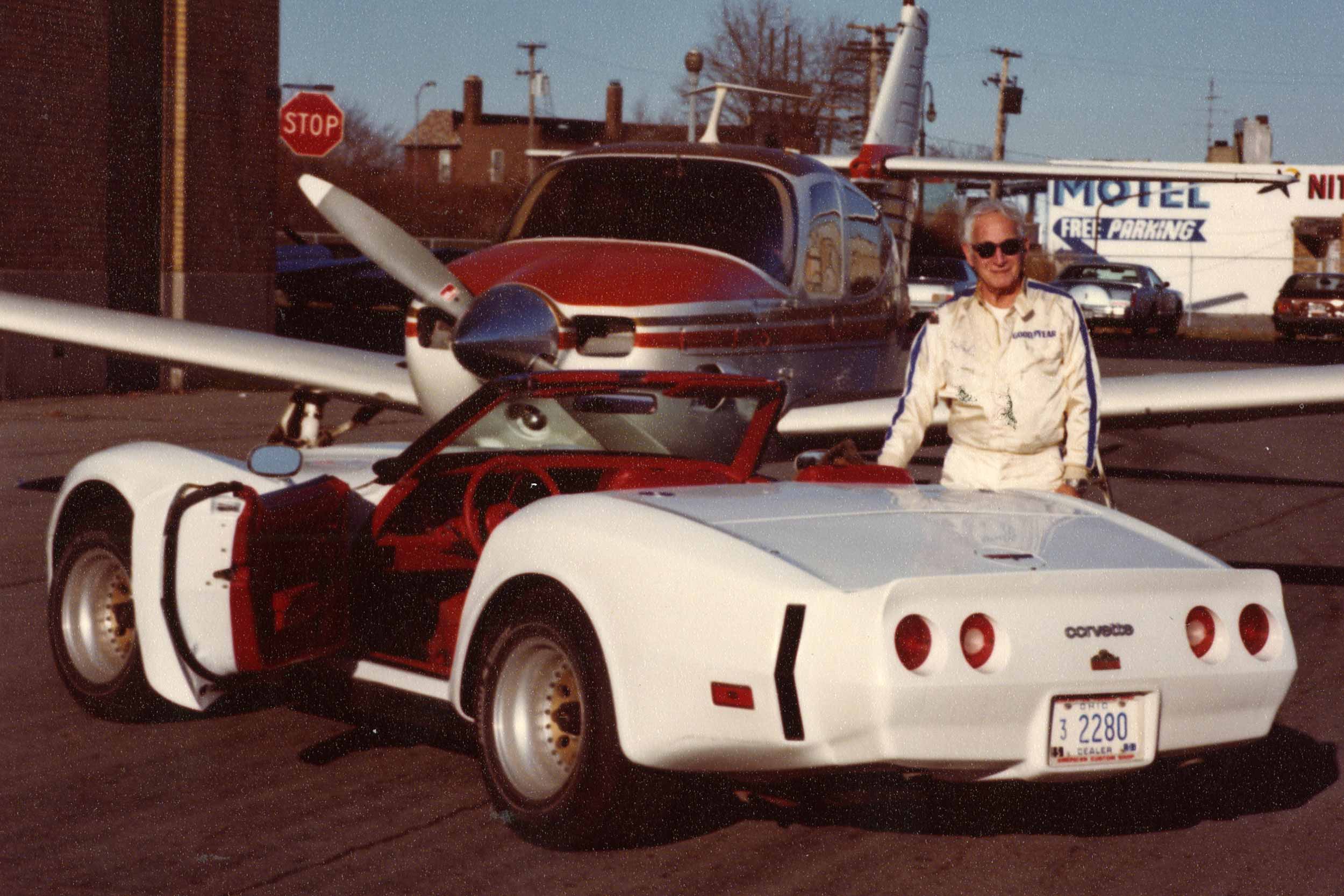 Our story begins, as all good Corvette stories should, with Zora Arkus-Duntov, the “Father of the Corvette.” Duntov was instrumental in transforming the Corvette from the showstopping 1953 concept car into the performance icon it’s known as today. He introduced the V8 to the Corvette in 1955 and the Grand Sport program in 1962. Any time Corvettes went racing, Duntov was there. Even the mid-engined Corvette slated to appear in 2020 is the direct descendant of Duntov’s experimentation with the layout in the fifties, sixties, and seventies.

As the performance era gave way to the oil crisis and emissions regulations, Duntov’s vision of the Corvette as America’s sports car was increasingly out of sync with the ideas of GM management. His requests for more power were rebuffed. “Twice I asked for a turbocharger,” Duntov said in a 1980 interview. “Each time I was turned down. They said that a turbocharged L82 would only sell a thousand units. I said it would be more like 6,000. They just said it would be unprofitable, and that was the end of the turbocharger for the Corvette.”

Upon retirement from GM in 1975, Duntov put his years of engineering experience and knowledge to use as a consultant. He was eventually approached by ACI and spoke at the company’s annual open house. Rather than the standard speaking fee, ACI refurbished the exterior of Duntov’s personal 1974 Corvette.

The engineer was impressed with the work, and agreed to collaborate on a special project, with one caveat: the car had to be a turbo. A run of 201 vehicles was agreed on, with Duntov to receive #000. 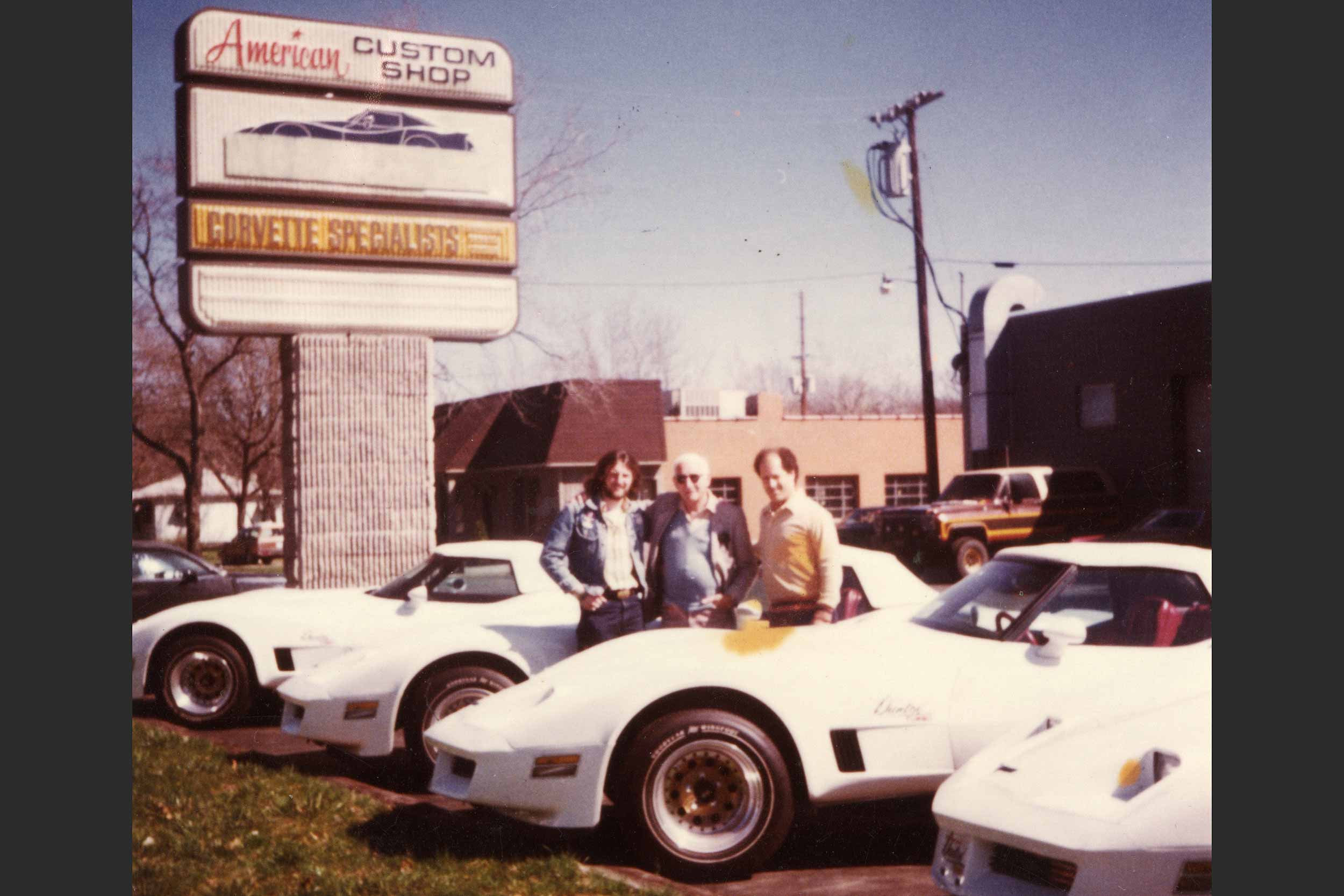 The resulting car survived a difficult birth and entered the world as a white convertible with a handsome widebody kit emblazoned with “Duntov Turbo” graphics. The interior shone cherry red. Even the Goodyear Wingfoot tires were unique. “ACI had special sizes made for the Duntov,” remembers Bart Lea, current owner of American Custom Industries.

Production began in 1978 and lasted until 1981, but alas, the economy stumbled and there was little call for a specialty car that cost three times as much as a showroom Corvette. The company wound up building both convertibles and coupes over the period, and in various colors.

It’s impossible to know how many Duntov Corvettes were produced. “I have documentation for 26 of them,” said Lea, “But as far as their true number, I do not know. Anything that was actually licensed or called a Duntov had the widebody kit.”

Additionally, all Duntovs have a gold serial number plate on the driver’s door jamb that says “American Custom Industries” and “Duntov Corvette.”

Even with such obvious markers, verification can be difficult to impossible. Bob Schuller was the owner of ACI at the time the cars were built, but according to Lea, “After Bob died, the files were misplaced or lost.”

It’s highly unlikely that there are any records at all for ACI-built, non-Duntov Corvettes.

Our mystery Corvette entered this world, according to its trim tag, in August of 1980 with a red paint job and matching red leather interior. Where it went next is unknowable, but it’s reasonable to theorize that it visited ACI. Under the hood is a Martin turbocharger, which Lea confirmed the company used at the time before switching to Rajay units. 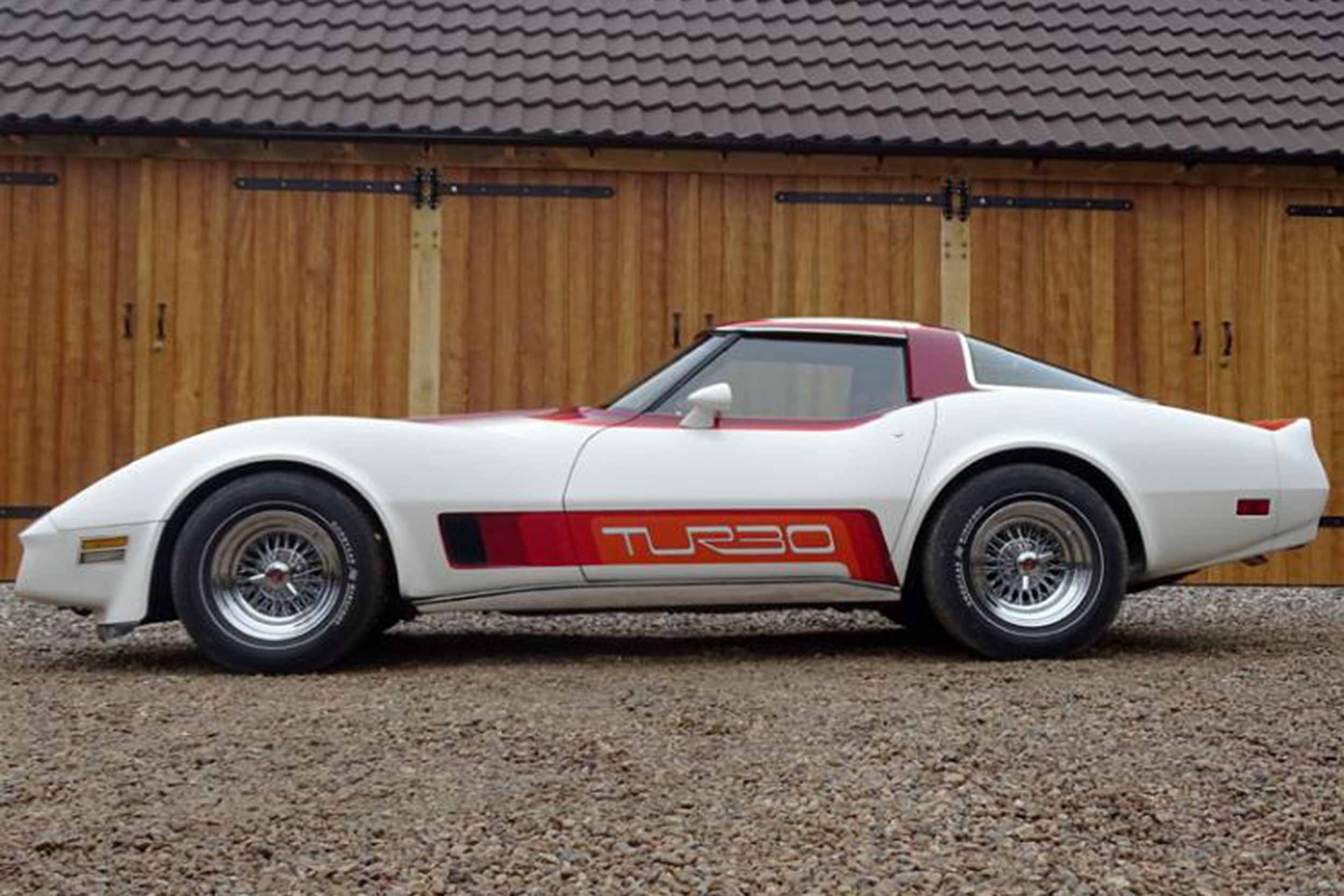 Before it defected to England in 2014, our car crossed the Barrett-Jackson auction block twice, first selling for $17,050 in 2012, and then again for $17,600 just six months later. In both descriptions, the car is listed as having the aforementioned Goodyear Wingfoot tires.

The white exterior and red interior mimics the widebody ACI cars, and Barrett does indeed describe it as “a Duntov paint scheme.” When asked, Lea said, “ACI did paint schemes similar to that.”

There is indeed some evidence, no matter how thin and inadmissible in court, to support an argument that this Corvette is an ACI car. 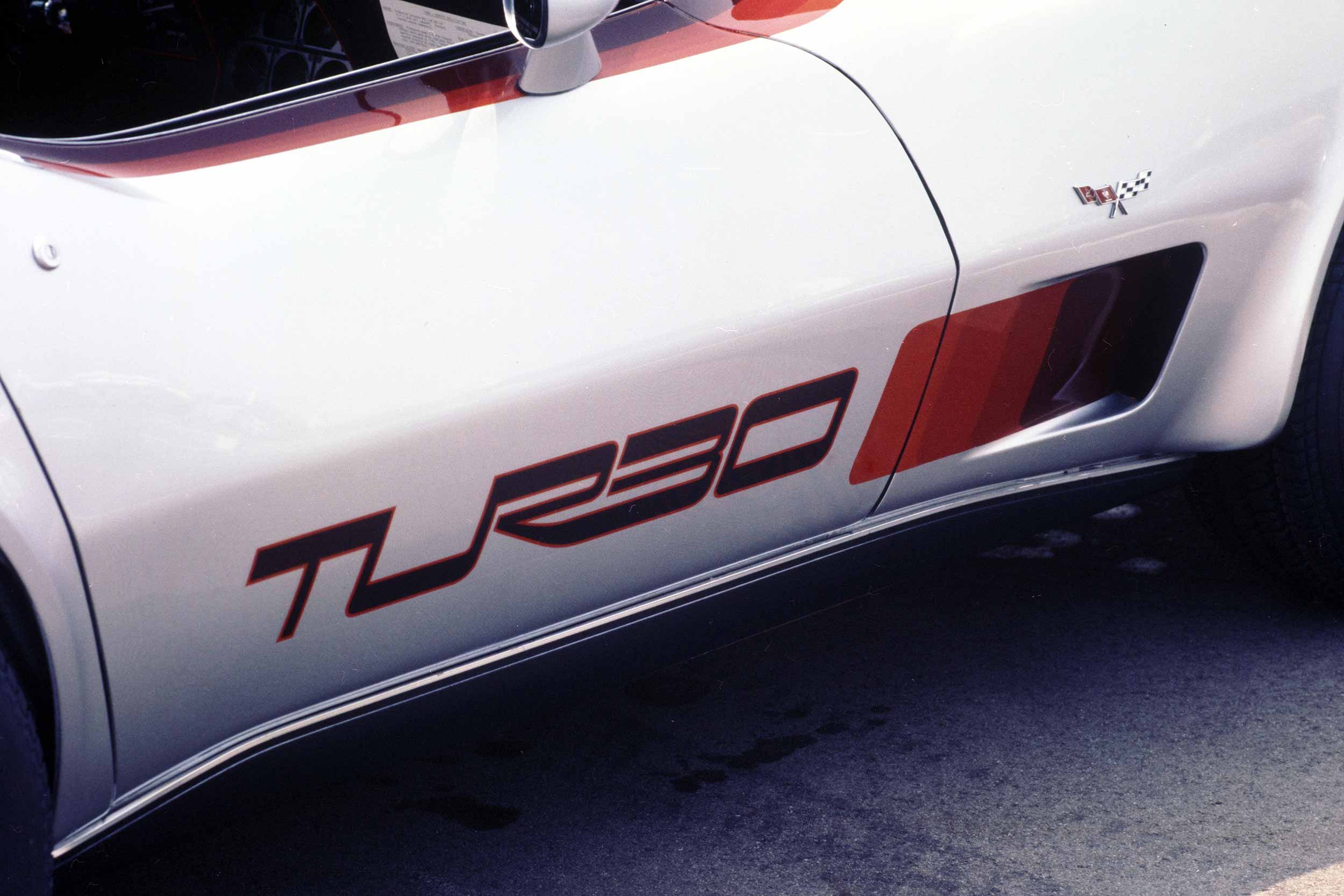 In what Duntov may have described at the time as a “total dick move,” Chevy began developing an experimental turbo Corvette in the late 1970s. The car was shown off to journalists in 1979 and again in 1980.

Could our mystery car be a Chevy test mule? At least one example has come up for sale, though without the “TURBO” decals. Speculating once again, perhaps the new owner put new decals on to recall the car’s former glory.

The differences between the Chevy mule and our car are fairly clear, though. Chevy used a twin-turbo setup, different wheels, distinct badging, and a unique striped interior (as seen in period pictures). 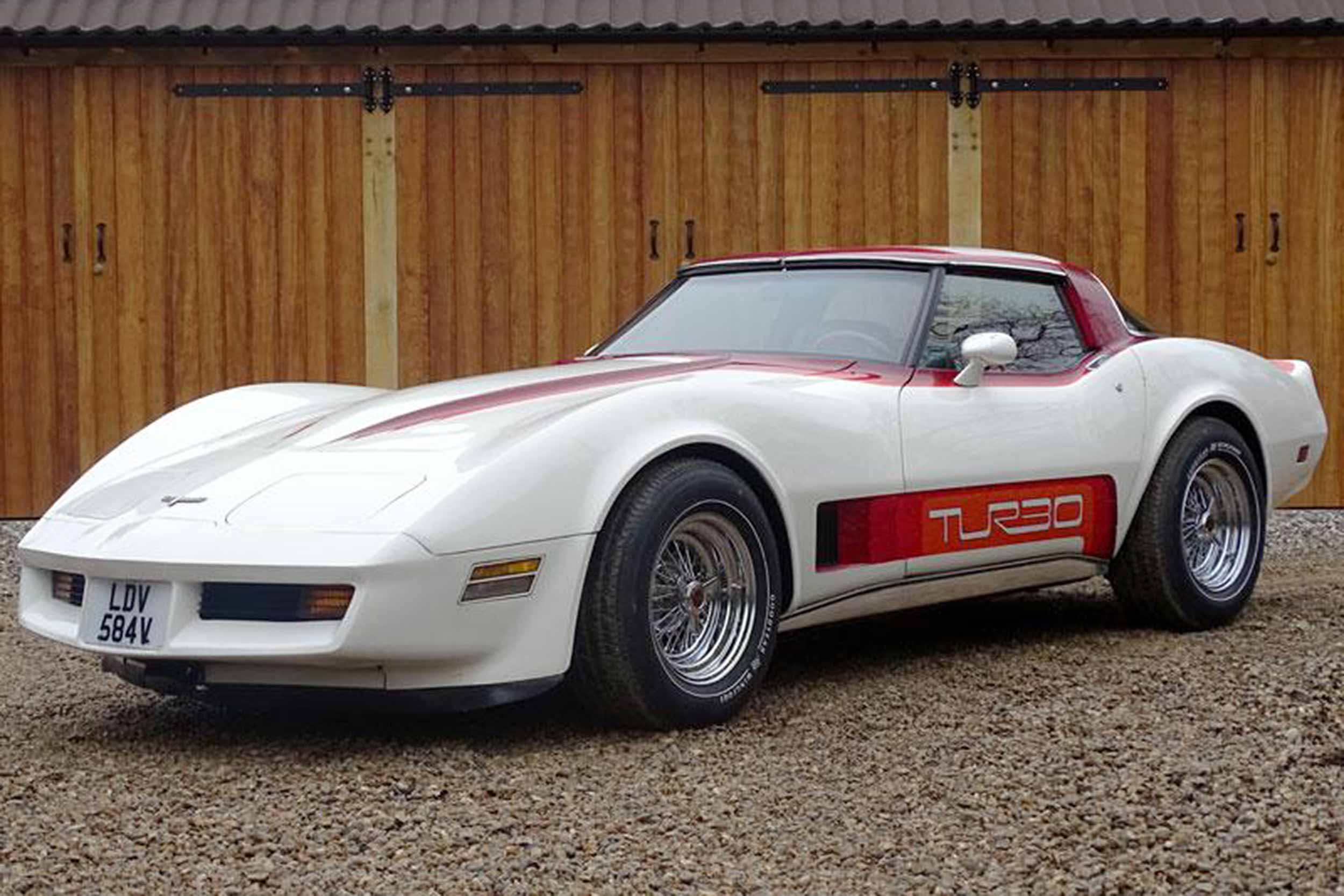 What are we left with?

Our car was described by both H&H and Barrett-Jackson simply as what it is: its make, model, color, interior, and engine specifications.

If we choose to take the harder route and describe what it is not, we chip away all the bluster and faff that should by all rights make this unique vehicle completely unaffordable. It’s not a verified Duntov Corvette. ACI can neither confirm, nor deny, its existence. It’s not a priceless Chevy engineering experiment. Given its sales history over the last six years, it’s probably not even a particularly good investment, and one would assume that its weird parentage might even further detract from its future value.

What we are left with is an amazing collector vehicle, a one-of-a-kind slice of 1980s turbocharged Americana with just enough Duntov street cred to reasonably argue the point, at least after a few beers.

Now what we have to do is get the damned thing back from England.