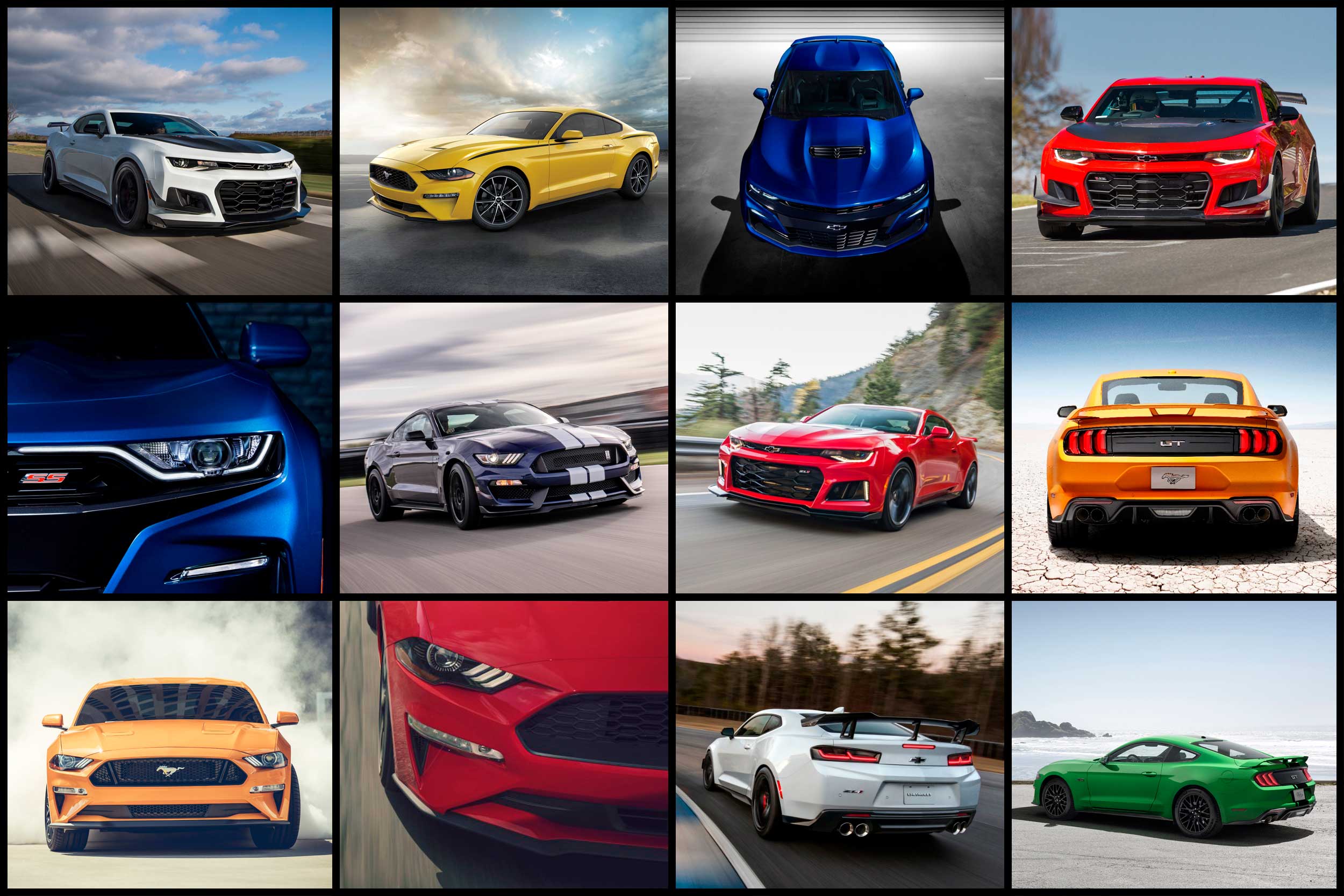 The Ford Mustang debuted at the 1964 World’s Fair. Aimed at a younger audience, buyers could not get enough of the sporty, affordable car. Chevy followed suit with the Camaro in 1966 as a direct competitor, forever cementing the pony car into the American automotive landscape.

The new cars for 2019 look better than ever: more power, improved handling, and the latest amenities. We break down the most popular trim levels for each model and take a closer look at what’s what. 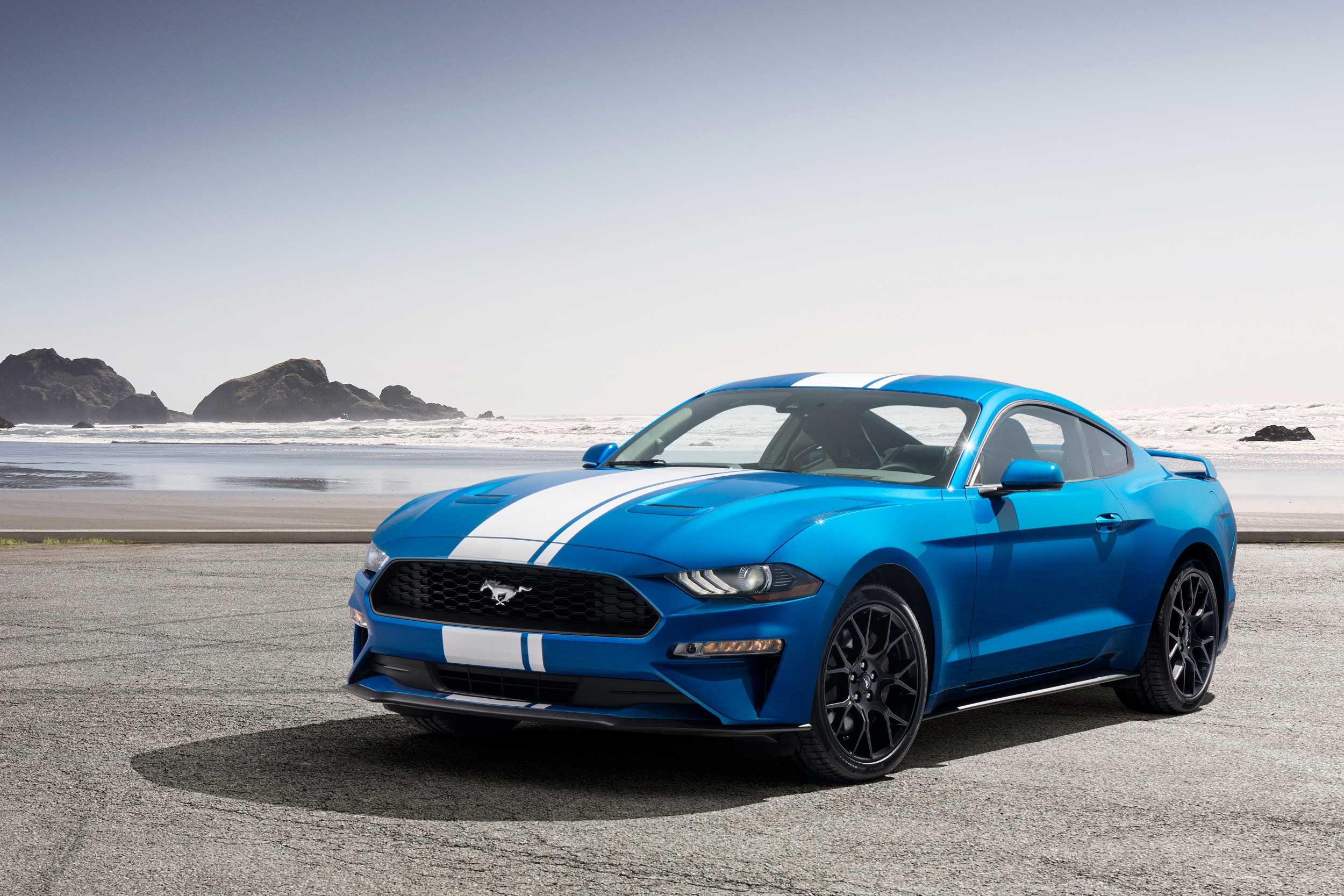 Ford’s opening salvo in the performance car wars is the Mustang EcoBoost. Powered and defined by its 2.3-liter turbocharged four-cylinder, the pony car comes standard with everything needed for sporting good fun: 310 horsepower, 350 lb-ft of torque, and a six-speed manual transmission (drivers who dislike rowing their own cars can opt for the silky 10-speed automatic for $1,595).

While the thought of a four-cylinder in an American performance car might make the old school cringe, that configuration is the new normal. From behind the wheel, there is power aplenty and the Ecoboost shoots off the line with aplomb. There’s even a Line Lock feature to warm up the tires before *ahem* “track use.”

For 2019, a fully-variable active exhaust lets drivers choose between four noise settings. Quiet mode ensures good neighbor relations for early morning startups, Normal is for everyday use, Sport adds a bit of growl, and Track unleashes the full roaring fury of the beast. 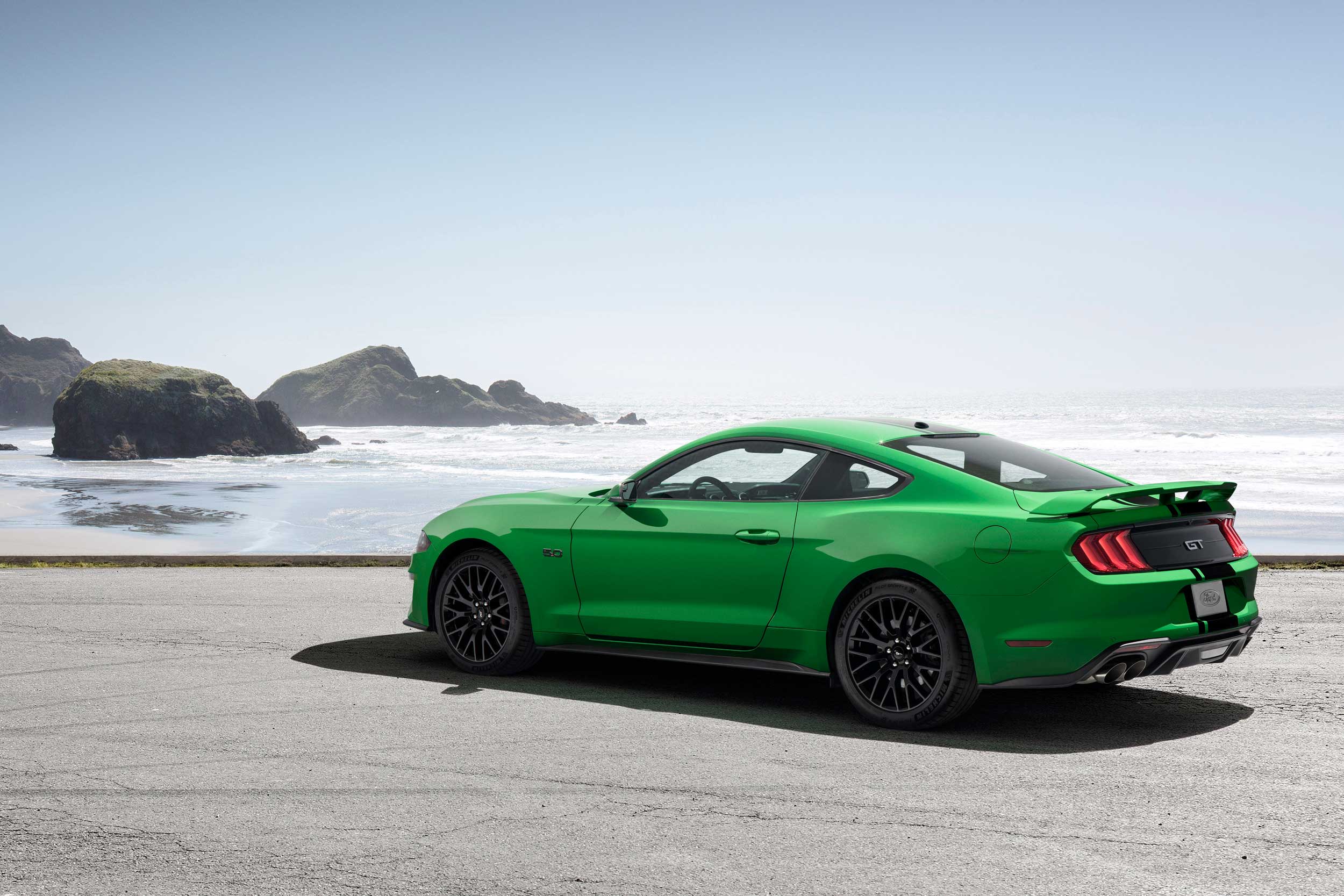 Stepping up to the GT adds V8 force and fury to the Mustang. The latest iteration of the famed 5.0-liter engine boasts 460 horsepower and 420 lb-ft of torque, more than enough to claim “Thrill-seeking Daredevil” as a job title on your resume.

Wheels are upped to 18-inchers to help keep all that power under control, and brakes expand to 13” discs in the rear and 14” up front, with the option 15” fronts available.

The six-speed manual is still standard fare, but adds a rev-matching function for 2019 that makes even the most ham-footed n00b look like Steve McQueen.

The GT Performance package ($3,995) adds a delightful bag of goodies to the mid-range Mustang, including larger wheels and stickier tires, a Torsen limited-slip differential with a quicker rear axle, heavy-duty front springs and a strut tower brace, unique chassis tuning to make the most of the improvements, and a larger radiator to keep things cool.

Like the EcoBoost, the GT is focused on fun rather than luxury. Selecting the GT Premium ($39,355) adds the same heated and cooled leather seats, improved infotainment, and endlessly entertaining selectable drive modes. 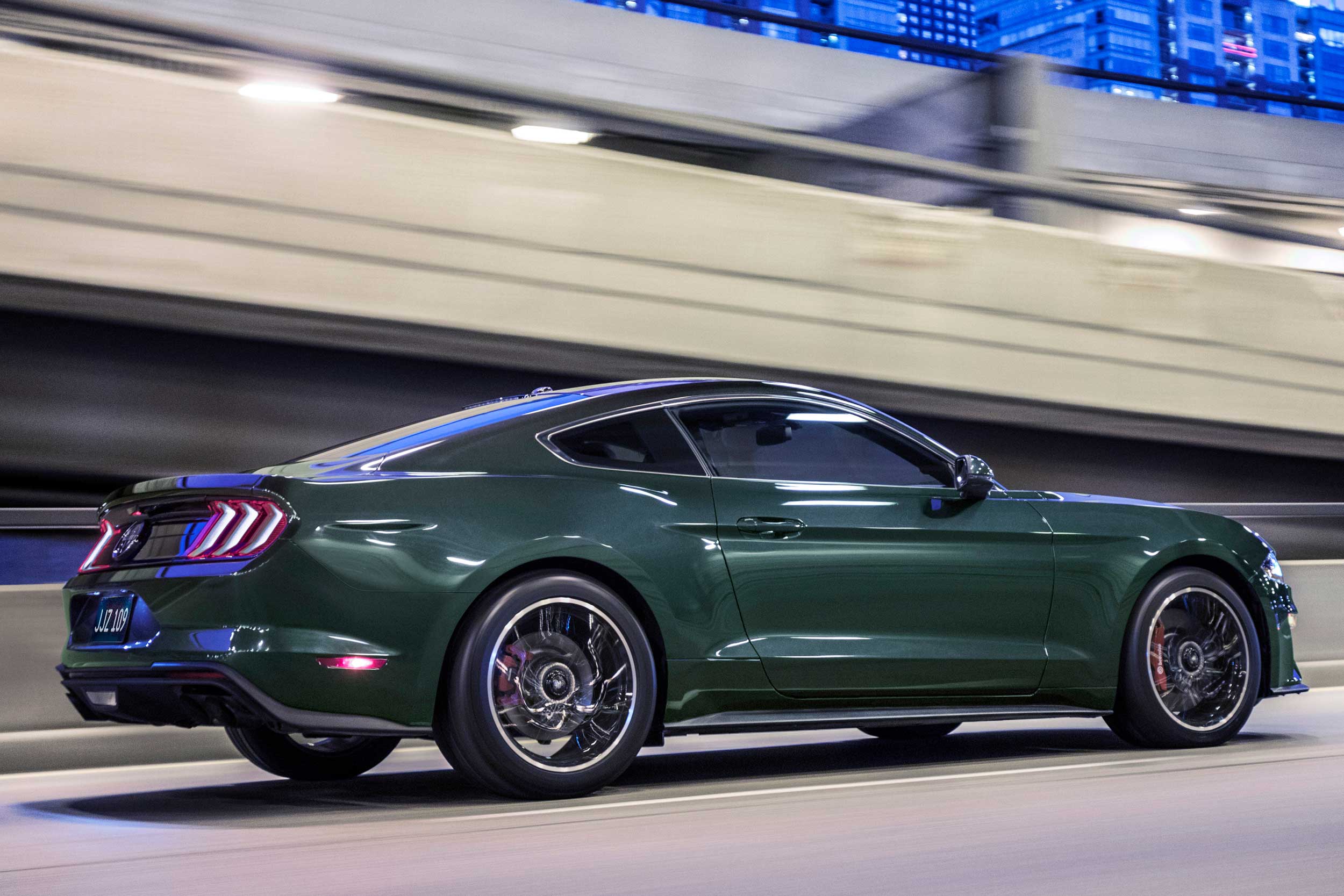 More than just an appearance package, the Bullitt piles performance on top of the already potent GT.

Horsepower is boosted to 480 from 460 thanks to an open air intake, larger throttle body, and unique powertrain control module. Top speed is now a blistering 163 mph, 8 mph faster than the GT. Stability control and ABS are unique to the Bullitt, and the GT Performance package with track-ready suspension mentioned above is standard fare.

Buyers can choose between Shadow Black and the movie classic Dark Highland Green. Mean-looking 19-inch torque-thrust wheels wear summer-only performance meats, with bright red Brembo brake calipers peeking out from behind. Badges are deleted, as is the rear spoiler. A Bullitt-logoed faux gas cap sits in the center of the rear fascia where the original would have been. 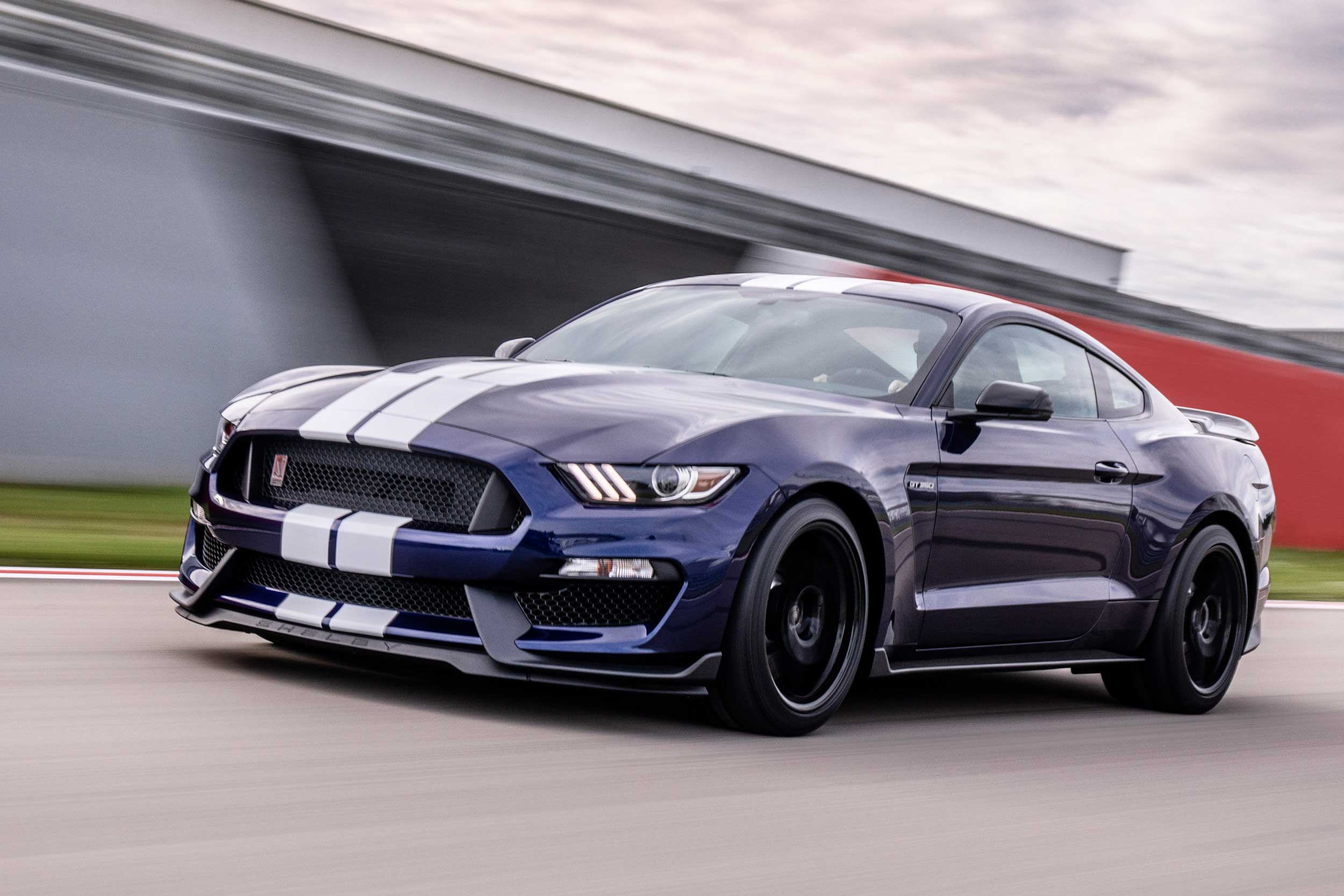 If the muscle car Sturm und Drang of the Bullitt still leaves you wanting more, the track-focused Shelby GT350 may be your answer. Ford’s engineers spent hundreds of hours in competitive track testing to eke even more performance out of the already-blistering Mustang.

Featuring a howling 5.2-liter V8 with a flat-plane crank and 8,250 rpm redline, the Shelby sports 526 horsepower, 429 lb-ft of torque, and a top speed of 170 mph. Shifting comes courtesy of a race-proven Tremec manual six-speed.

Michelin tires with tread pattern specific to the GT350 are new for 2019 and engineered to deliver maximum acceleration and braking. Lateral grip is maximized on stiff staggered 19-inch wheels, 295/35 front and 305/35 rear. New tires required suspension tweaks in the form of stiffer anti-roll bars and revised active dampers.

Moving up to the Shelby GT350R ($67,940) deletes the air conditioning and rear seat to save weight, but adds carbon fiber wheels, stickier tires, a larger front splitter, and a ginormous carbon rear wing. All these go-fast goodies are not just there for looks; they significantly lower lap times, adding even more adrenaline to track days 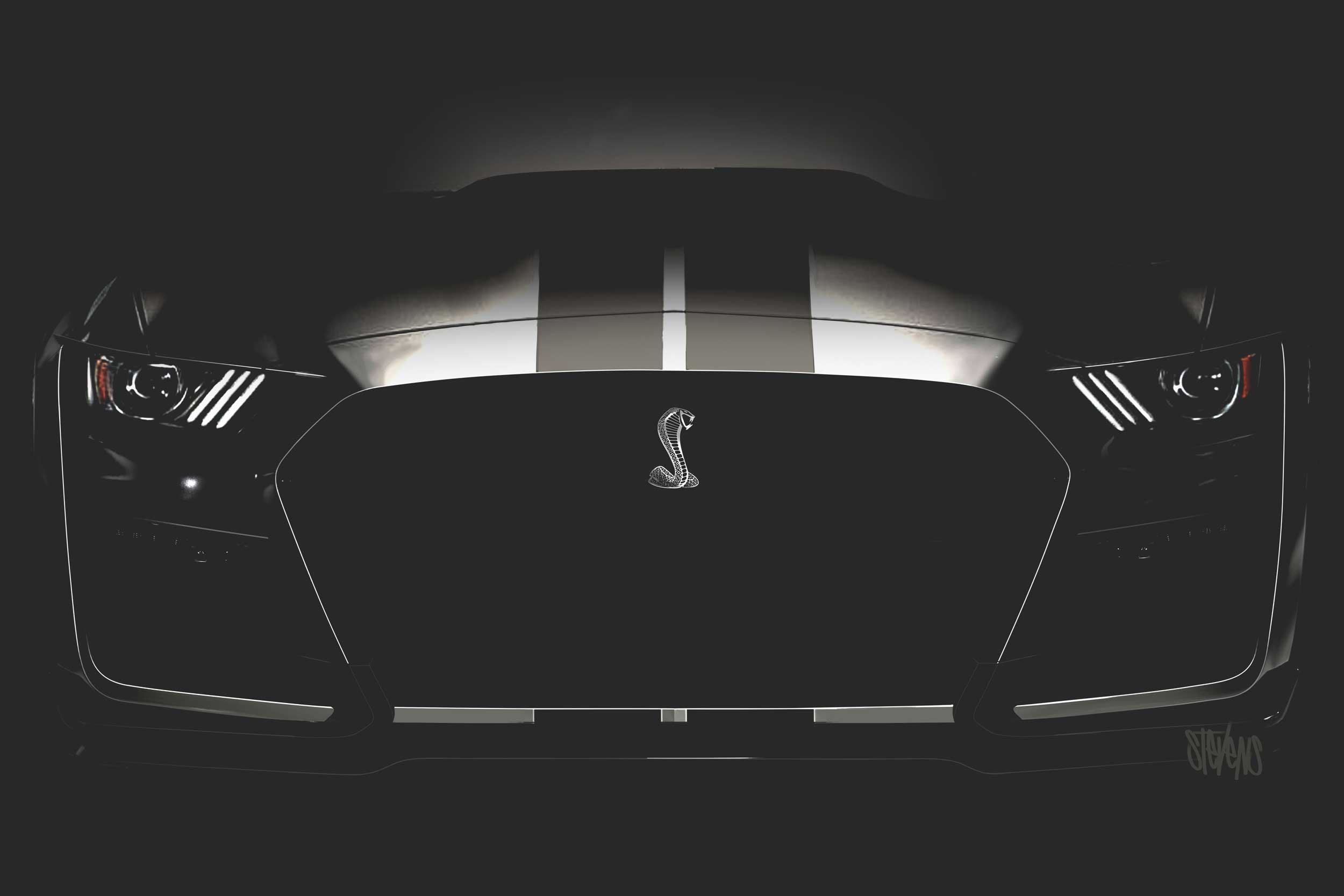 There are few concrete details available about the new model, but Ford has said there will be over 700 horsepower under the hood. Rumours suggest the engine will almost certainly be supercharged, and a huge heat extraction vent on the hood shown in teaser photos seems to confirm this. Top speed is estimated to be 200+ mph.

Spy photos have shown Ford testing the 650-horsepower Camaro ZL1 and benchmarking a Porsche GT3. Give the track prowess of the Shelby GT350, these comparisons make sense, though we expect the intended competition to be the ZL1 and Challenger Hellcat. If the GT500 carries a similar weight to the GT350, it will be lighter than both those cars.

As mentioned above, Ford has said that the enhanced performance of the 2019 GT350 is due, at least in part, to the development of the GT500.

The new Shelby is expected to debut at the Detroit Auto Show in January 2019 alongside the new Ford Bronco. 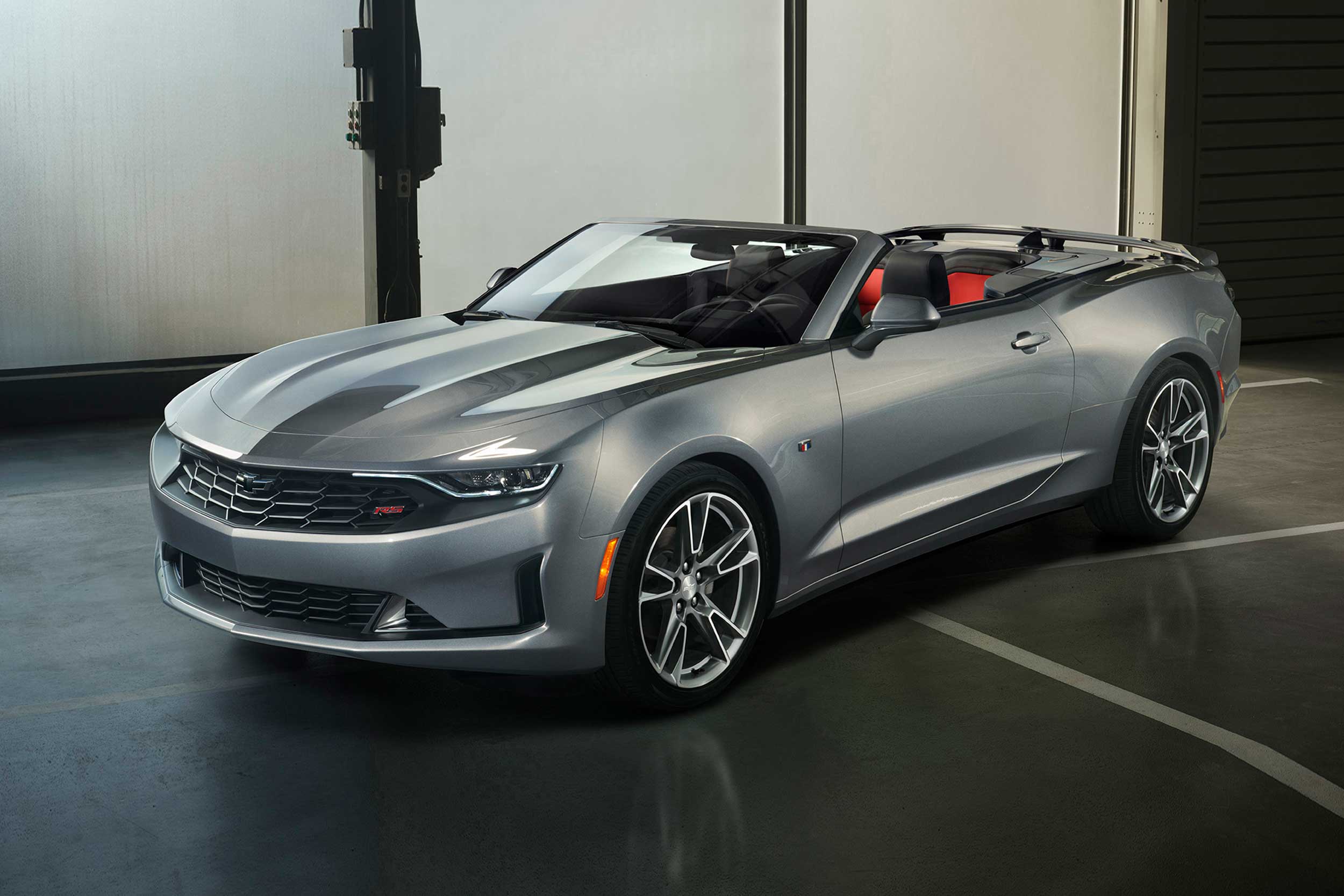 The Chevrolet Camaro received a mid-cycle refresh for 2019, with new headlights, taillights, front and rear and fascias (the ZL1 model retains its original headlights and grille for performance reasons). Looks and aero are improved, and there’s now more visual distinction between trim levels.

A six-speed manual is the only option on the LS, and comes paired with a limited-slip differential. The 1LT exchanges the rowbox for an eight-speed paddle-shift automatic as its only option, but loses the limited-slip. The 2LT can be had with either setup.

All three trim levels have Chevy’s latest Infotainment 3 system installed, with Bluetooth, Apple CarPlay, and Android Auto as standard equipment. LS and 1LT models have a 7-inch touchscreen and six-speaker sound, but can be upgraded to the 2LT’s standard 9-speaker Bose system and 8-inch touchscreen. Navigation is available on the 2LT only.

While the base LS and 1LT are loaded with sporty Camaro goodness at a value price, the 2LT ($31,495, 2018 model) adds heated and ventilated powered front seats, dual-zone climate control, illuminated vanity mirrors, and other standard goodies that make the cabin a little bit of a nicer place to be.

The RS package is offered for all LS and LT models, adding 20-inch wheels, HID head- and taillights, and an RS-specific grille and spoiler. 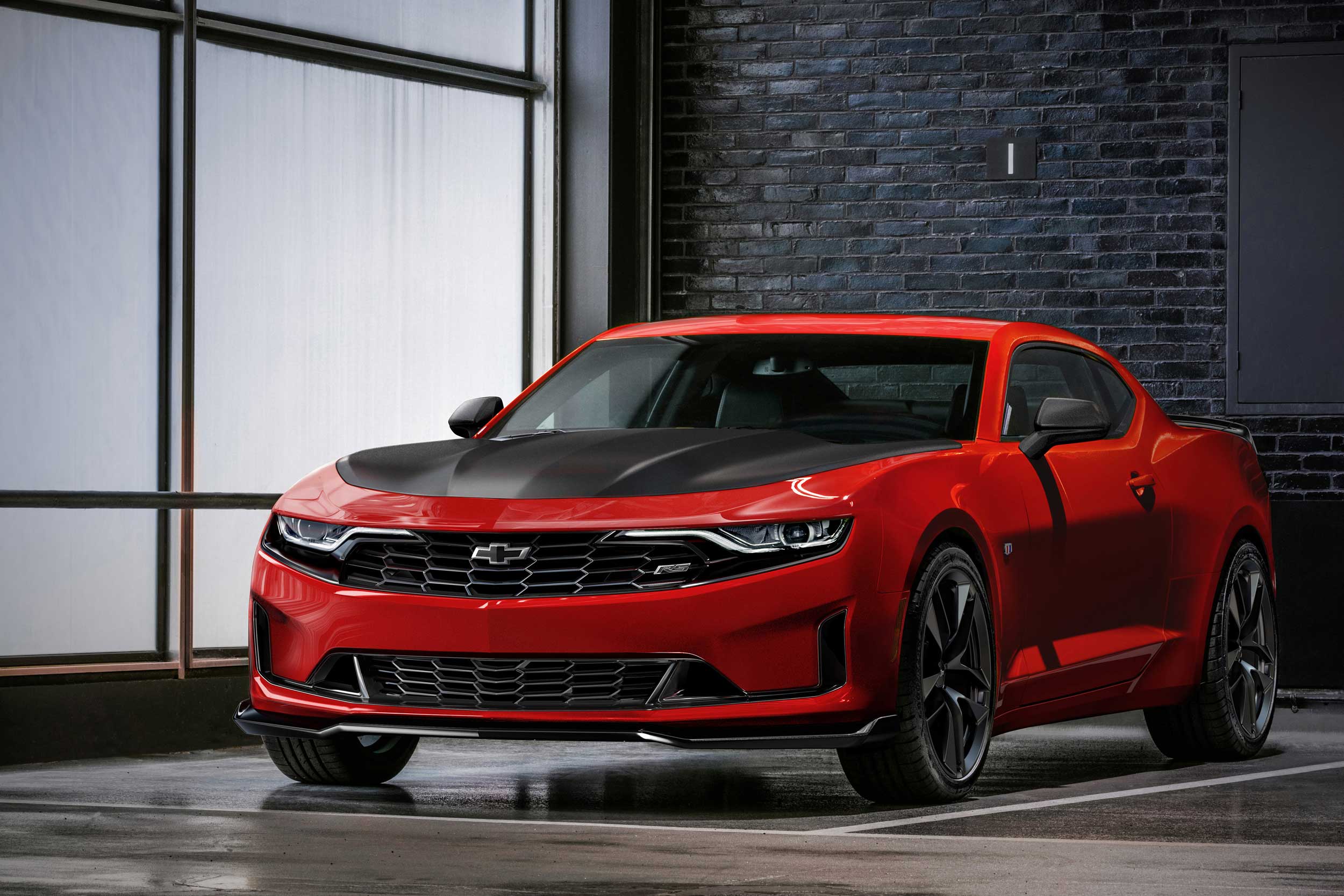 For 2019, the notoriously speedy 1LE performance package is available for the first time on 2.0-liter turbo models. Waterfalling track-tested Camaro SS components down to the entry level LS and LT, the 1LE was previously only available when paired with a V6 or better.

On the outside, the 1LE differentiates itself with a black hood, mirrors, front splitter, rear spoiler, and staggered-width 20-inch wheels, 245/40ZR20 front and 275/35ZR20 rear.

Inside, there’s a drive mode selector that allows the driver to set the sound of feel of the vehicle. Track and Sport modes offer performance readouts, launch control, shift lights, and more. For added sportiness, Recaro seats are available paired with a suede flat-bottom steering wheel and suede shift knob.

While all that may sound to the cynic like nothing more than an appearance package, albeit a fairly cohesive one, rest assured: there is plenty of go to go with the show.

The performance suspension is tuned for the lighter weight of the 2.0 and uses beefier front and rear stabilizer bars, stiffer rear cradle bushings, rear cross-axis ball joints to increase lateral rigidity, and specially tuned dampers to pull 0.97G, astonishing period but especially at this price point.

A limited-slip differential keeps the power on the ground in corners, and heavy-duty cooling keeps things under control on the track. There are four-piston Brembo brakes at the corners, and a performance exhaust at the rear. 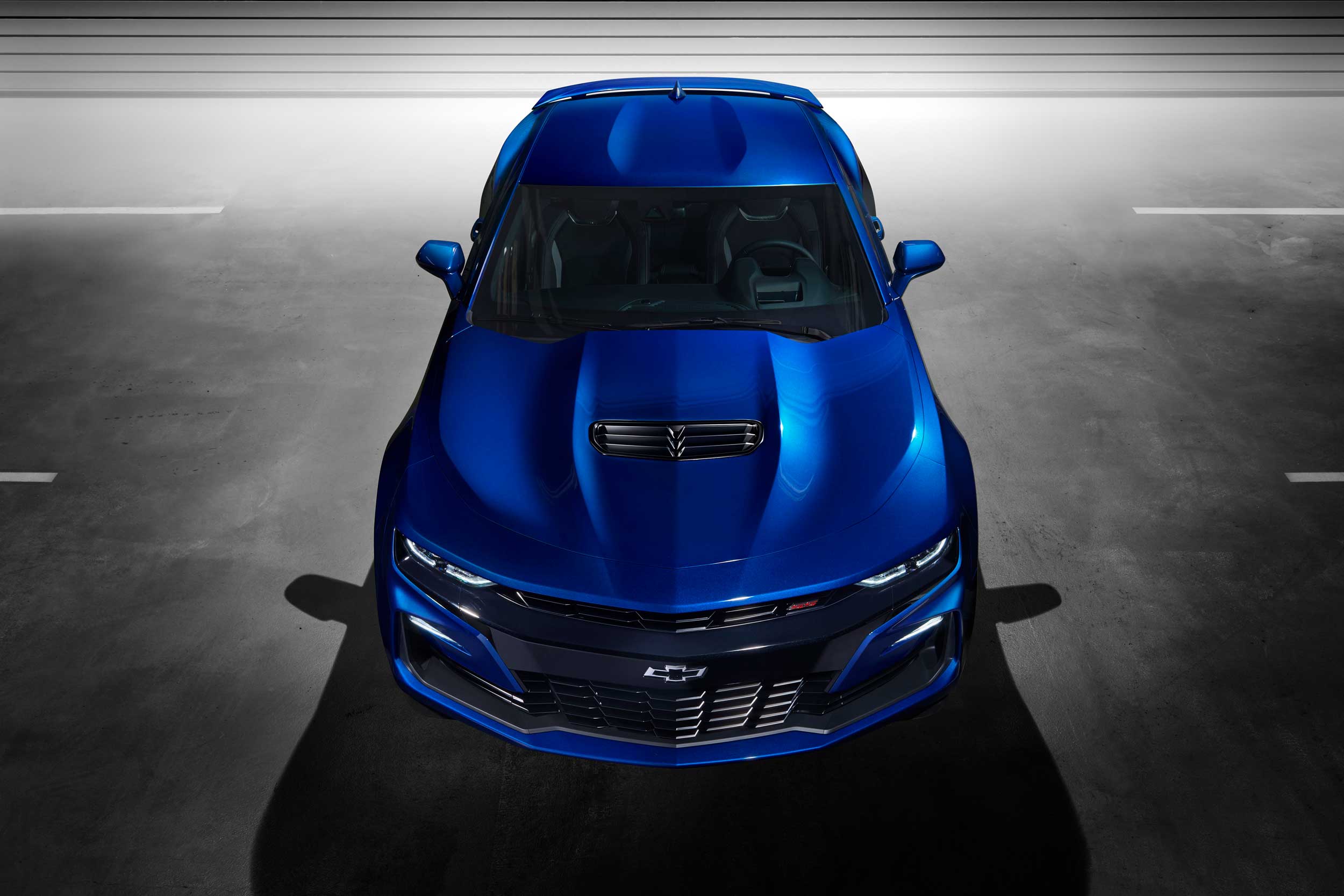 If one were to grossly oversimplify, the Camaro SS could be defined solely by its 455-horsepower, 6.2-liter V8. Yes, there are myriad performance bits to make the most out of every pony, the aerodynamics are ingenious, and all the latest comfort and safety technology is available, but the words “455 horsepower V8” pretty much sum up the SS’s existence.

Paired with the V8 is a six-speed manual transmission or 10-speed automatic, newly available for 2019 and previously seen on the Camaro ZL1. The unit features three driving modes: Tour, Sport and Track (we know which mode we’ll be leaving our Camaro SS in); line-lock to hold the front wheels in place while allowing the rears to spin freely, perfect for tire-warming burnouts at the track (not the Piggly Wiggly parking lot); launch control with driver-selectable rev settings, and lift-foot gear hold that prevents the SS form shifting in the middle of a corner.

Taking a page from the ZL1 book, the SS now sports a hood designed to extract heat from the engine bay, front bumper air curtains for slippier aero, and a hollow “flowtie” grille emblem that improves airflow over the radiator for increased cooling efficiency. 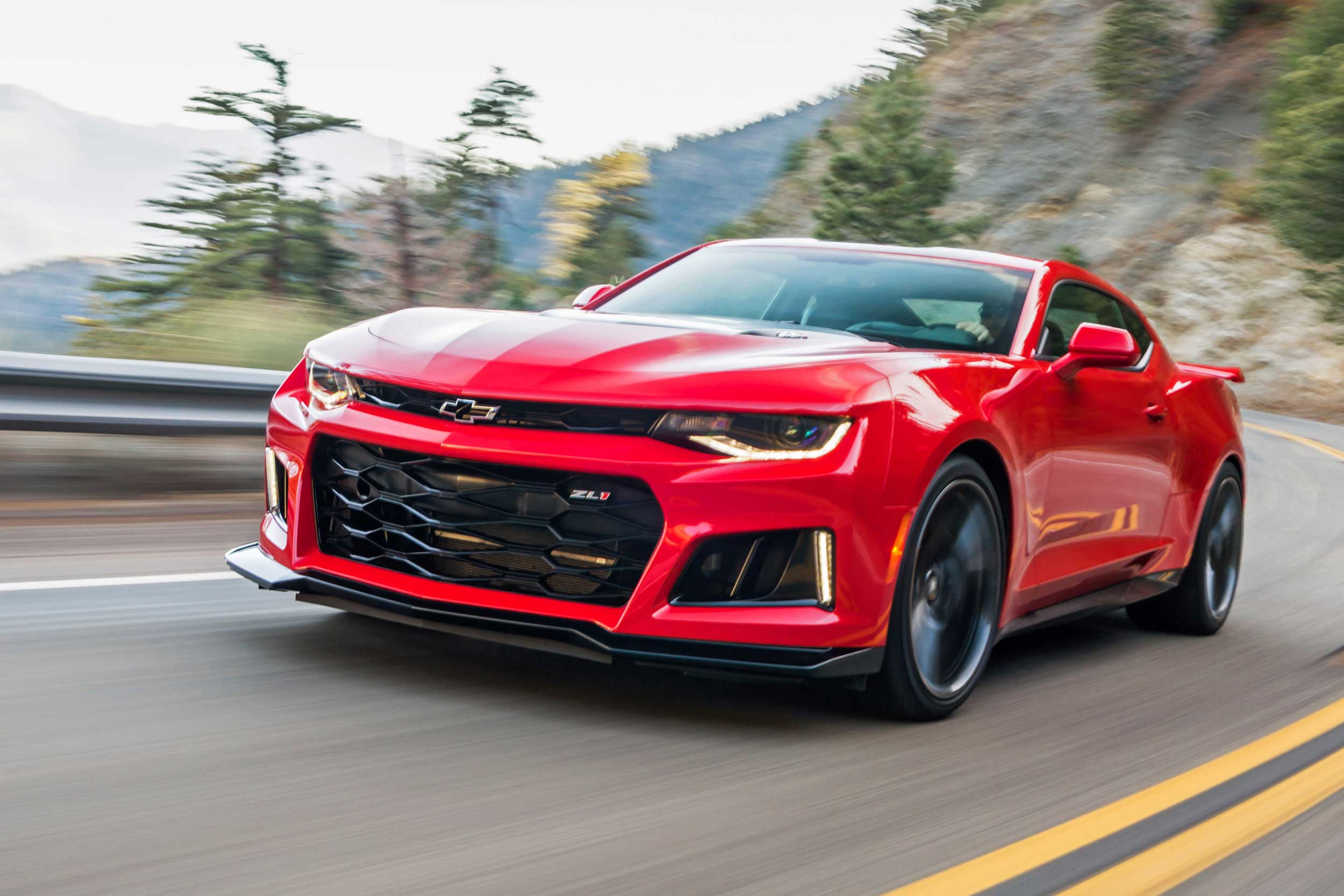 As mentioned above, Chevy’s engineers did not update the front of the Camaro ZL1 for 2019; the aero worked too perfectly to fuss with. The flowtie badge, the splitters and spoilers, the vents and ducts all work in harmony with the eleven heat exchangers to create a roaring sports cars that can lap a road course all day long and still pick up a quart of milk on the way home.

While rowing your own ZL1 with the six-speed manual gearbox is supremely satisfying, the 10-speed automatic offers lightning shifts, launch control, gear holding, and line-lock for heating up the rear meats before a pass at the quarter mile. Intelligent programming makes the 10-speed excellent for everyday driving, maximizing efficiency while still providing boatloads of fun. It’s also faster on the track for 95 percent of drivers.

Inside, driver and passenger enjoyment has been improved for 2019. An upgraded 8-inch infotainment system is more intuitive to use than the outgoing model, with voice recognition, connectivity including Apple CarPlay and Android Auto, apps, improved wireless charging, and available nav. Suede Recaro seats and a suede flat-bottomed steering wheel are standard, and a performance data recorder is available. 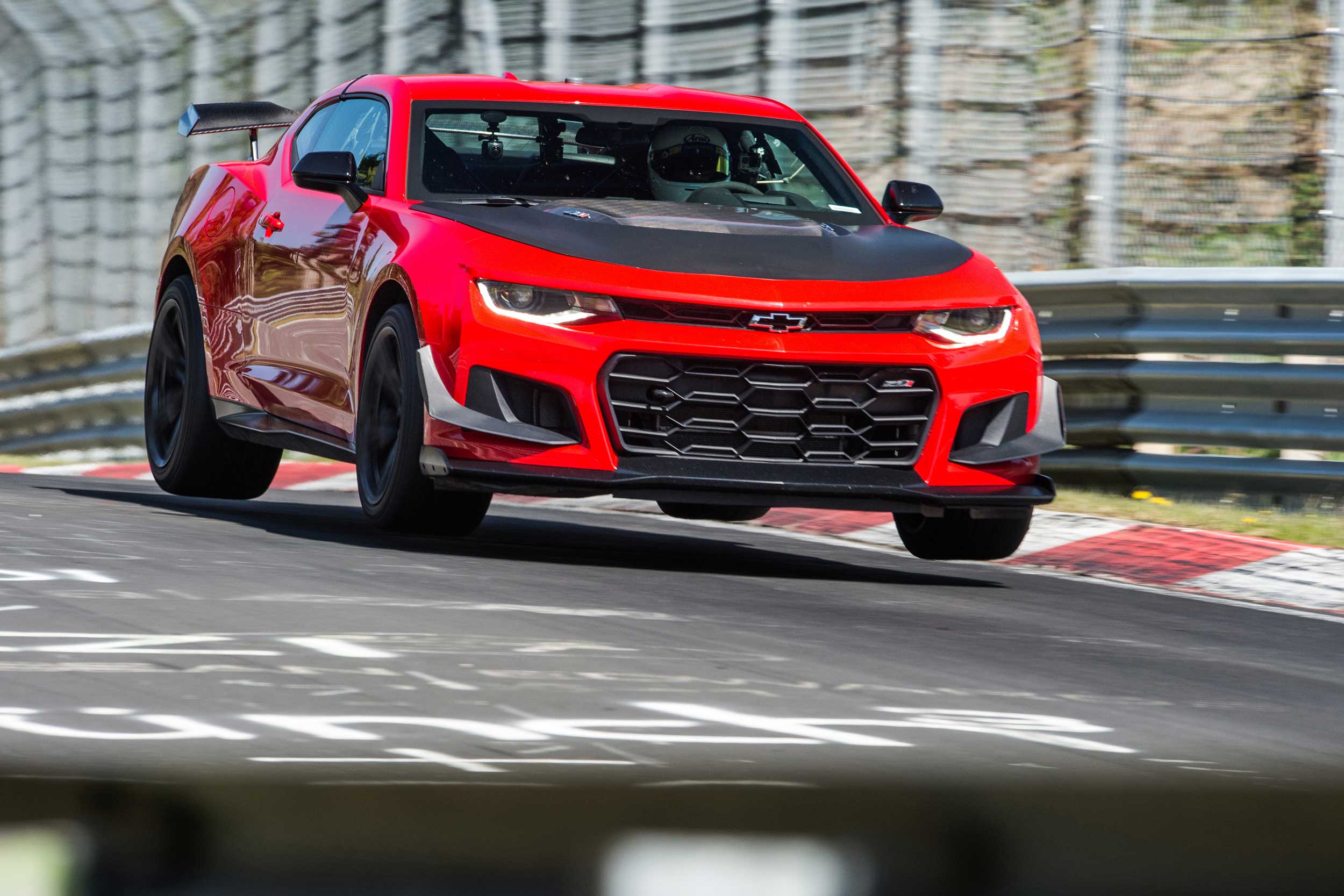 Perched at the very top of the Camaro food chain is the ZL1 1LE, adding substantial performance improvements to the already fearsome ZL1.

Dive planes up front, 1LE-specific air deflectors, and a carbon fiber spoiler in the rear are there for more than just looks, though: they generate real downforce, allowing more speed and better grip in the corners.

Even more stick comes from the summer-only Goodyear Eagle F1 SuperCar tires (what a mouthful!), 305/30R19 front and 325/30R19 rear. Aero and rubber working together contribute to the 1LE’s 1.10G of lateral grip.

The wheels themselves are forged aluminum and lighter than a standard set. Combined with lighter dampers, a lighter rear seat, and thinner rear glass, 60 pounds is shaved off the 1LE compared to the standard ZL1 Coupe.