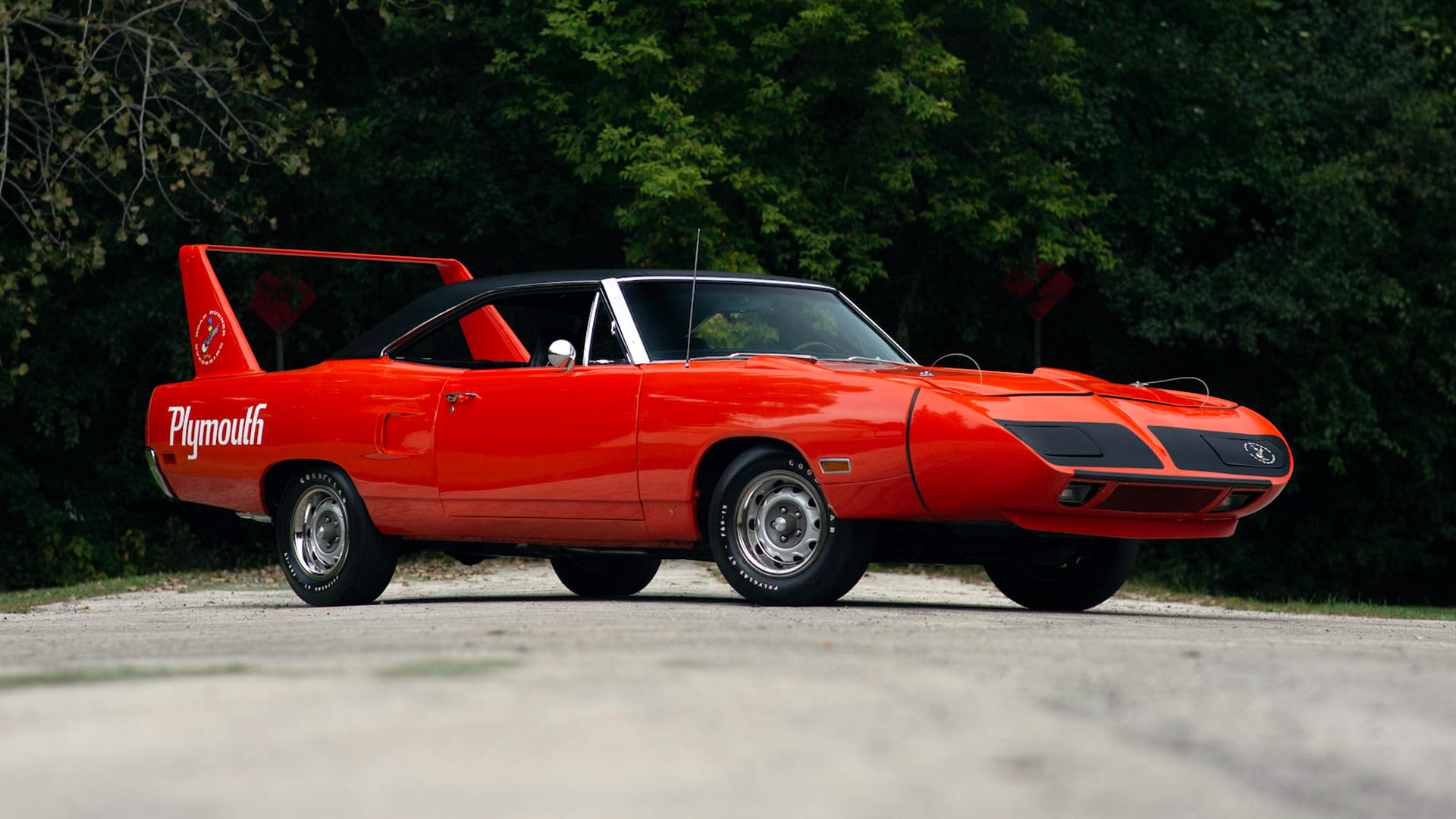 Fall may truly be upon us, but that is not slowing down the pace in the collector car auction world.

From Thursday, October 24th through Saturday, October 26th, a huge variety of cars, trucks and SUVs will cross the Mecum auction block in Chicago. Motorcycles, automobilia, and even engines will also feature in the extravaganza.

The event takes place at the Schaumburg Convention Center, and we have picked out a selection of 21 cars and trucks which should capture attention in Illinois. 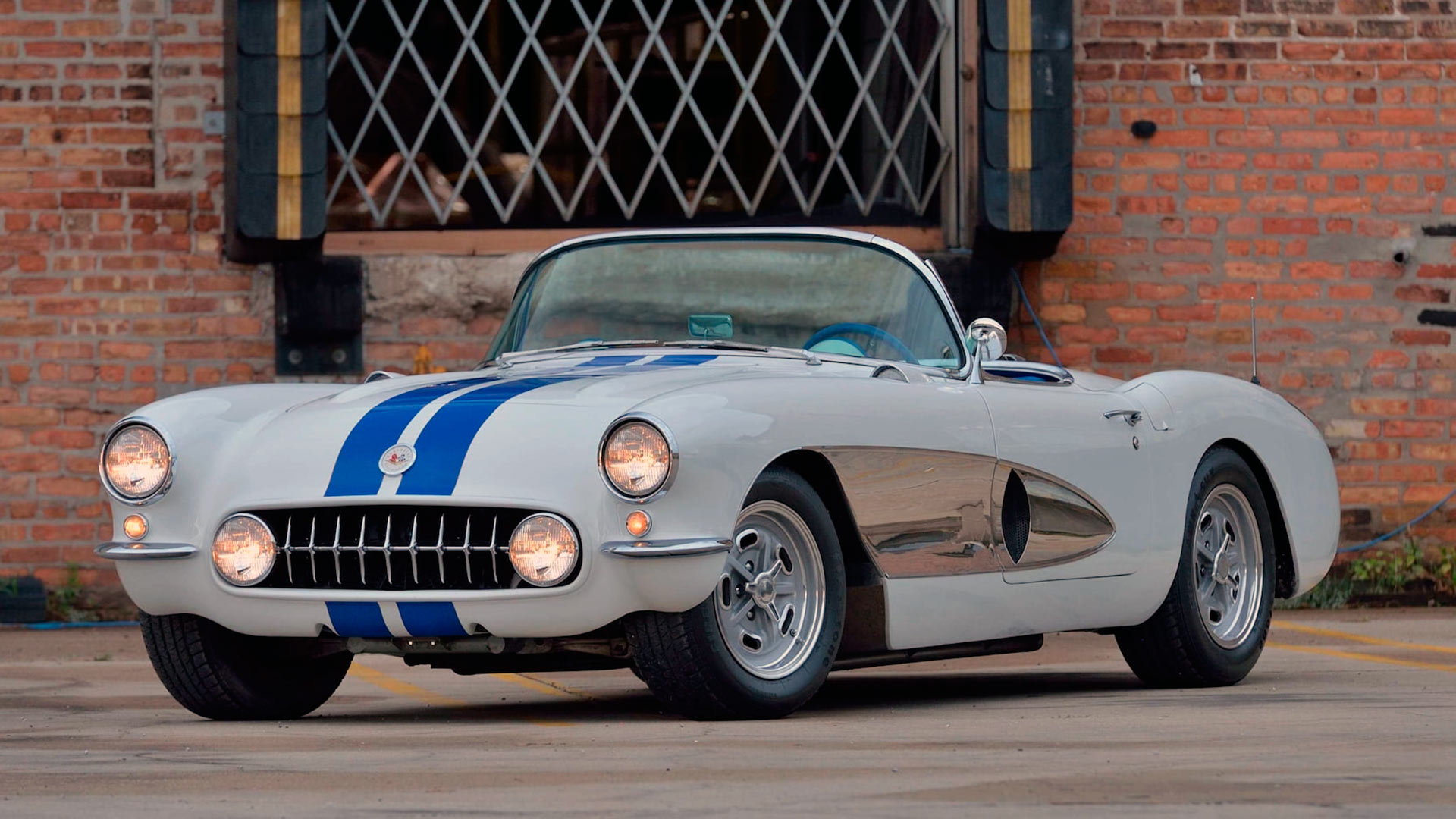 One of the leading attractions at the Mecum sale is a modified C1 Corvette created by Chicago-area native, Ken Hanna. Accepted as the first car to be built by SRIII Motorsports, this ‘57 Corvette uses a tubular frame chassis and suspension components from later ‘Vettes.

Beneath the hood is a 5.7-liter LT5 V-8 from a 1991 C4 Corvette, fitted with upgraded Lingenfelter headers and a 2.5-inch exhaust system. A ZF six-speed transmission sends power to a Positraction differential, whilst suspension from a C4 Corvette has also been added front and rear.

Numerous magazine appearances, and a ‘Chip’s Choice’ award at the invitation-only Corvettes at Carlisle show, demonstrate just how significant this C1 is. 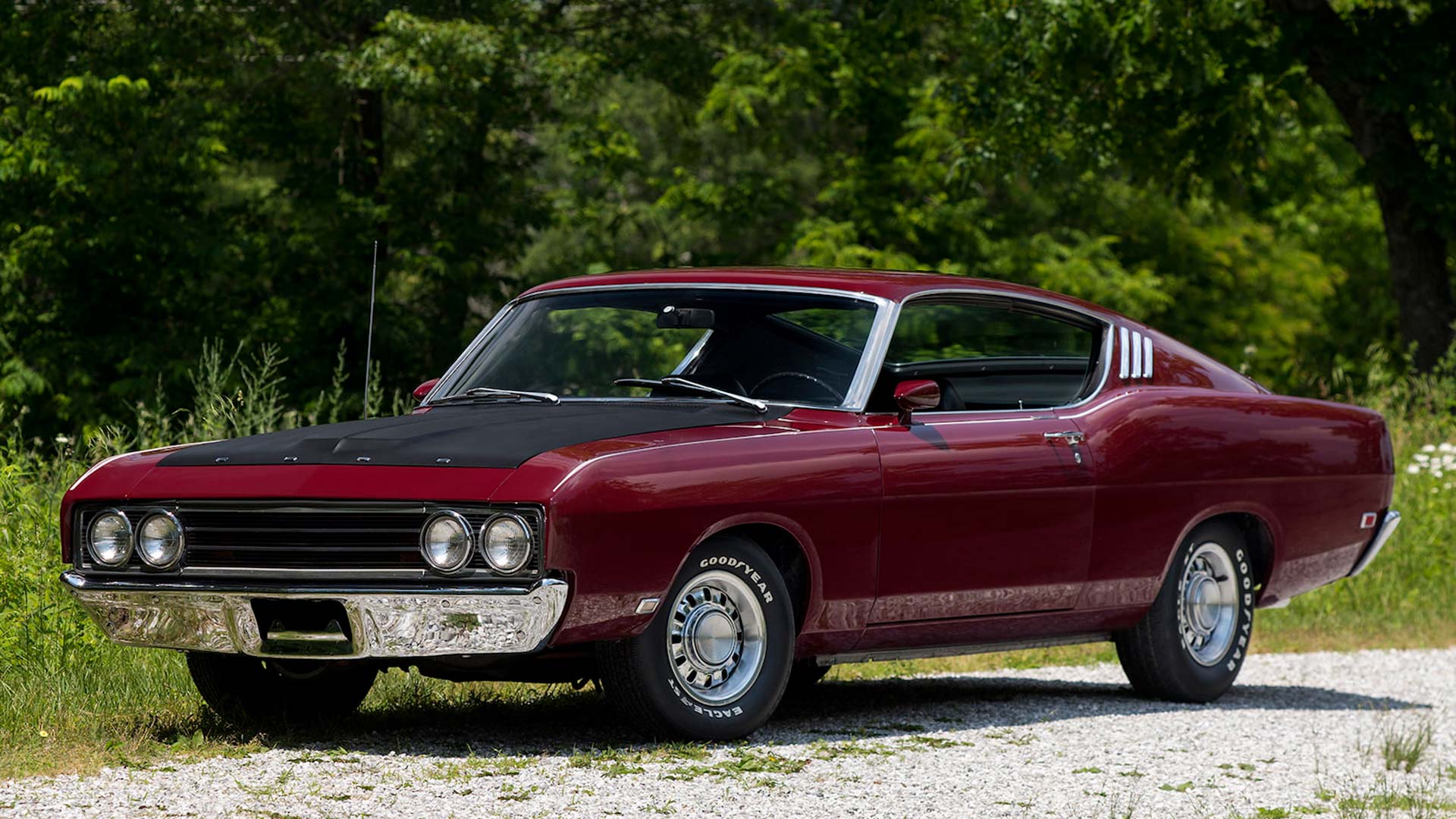 As one of just 750 examples, this Torino Talladega is certainly rare. Power comes from a 428-cubic inch Cobra Jet V-8 engine, producing 335 horsepower and connected to an automatic transmission. Said to be in original condition, and with original Royal Maroon paintwork, this car has covered just 25,000 miles. It certainly makes an intriguing alternative to Mopar winged machines. 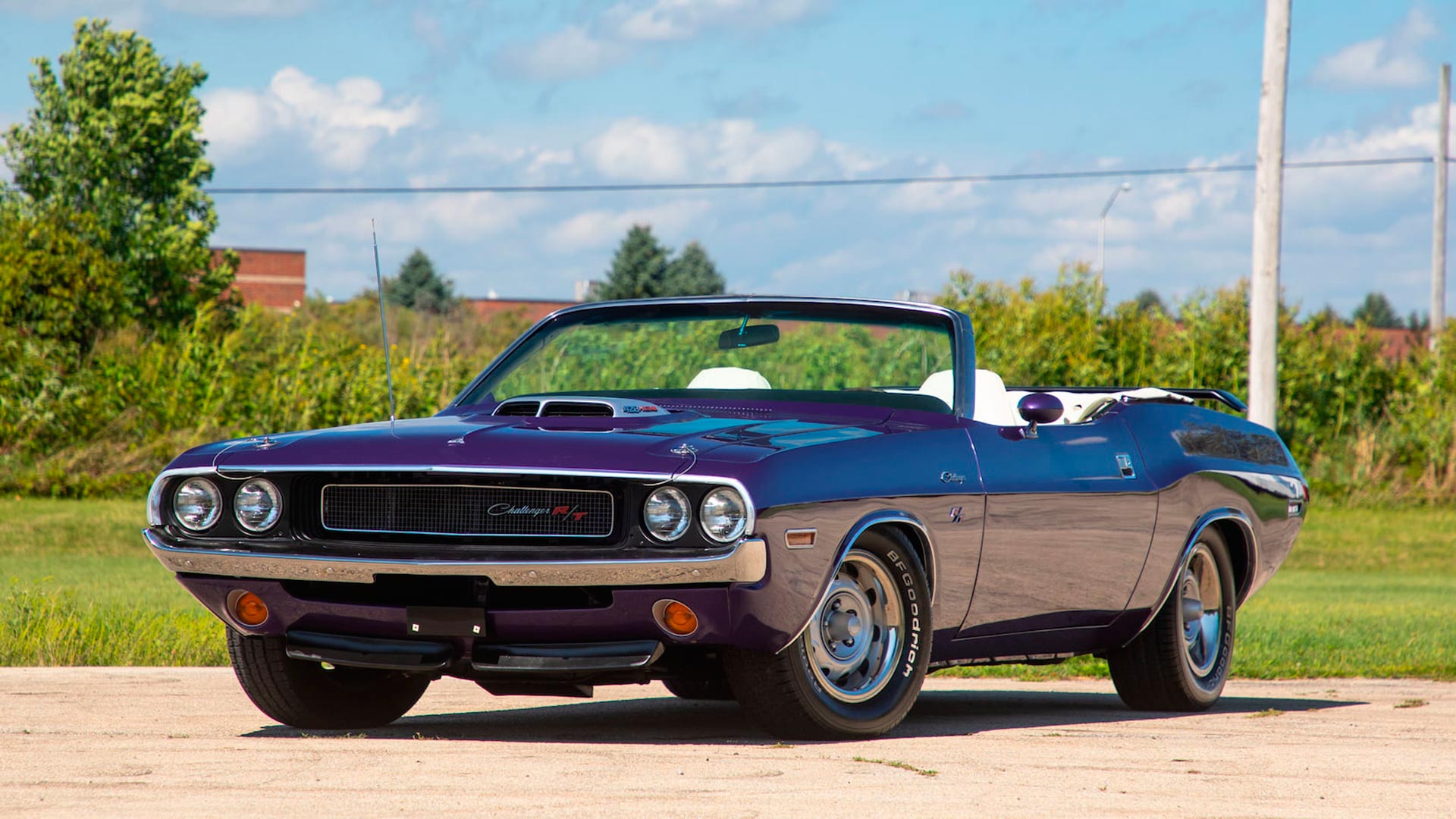 This Challenger is one of 23 vehicles from the Frank Karabetsos collection going under the hammer in Chicago, and said to be in outstanding condition. An important point to note is that this is not an original Hemi-powered 1970 Challenger Convertible. Whilst this may be a tribute to the nine factory built cars, it certainly will not disappoint.

A rotisserie restoration added a period correct 426-cubic inch Hemi V-8 engine, along with an automatic transmission and Dana rear axle. The Plum Crazy paintwork is matched with a white leather interior, and a white convertible top. A Shaker hood, rear spoiler, power steering, and power disc brakes have also been added to complete the makeover. 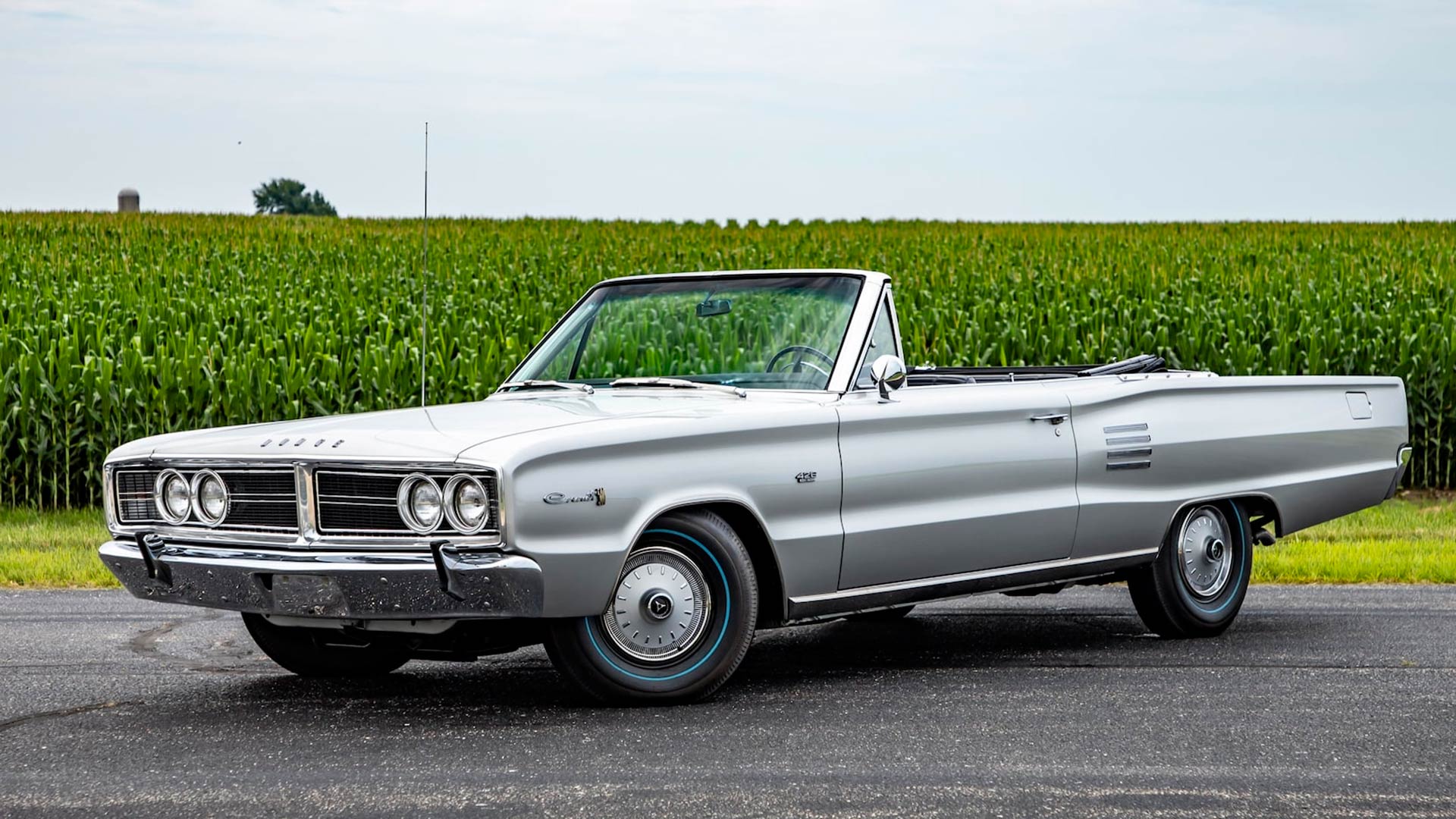 Production numbers matter in the Mopar world. This Coronet 500 is said to be one of just twelve convertible versions made in 1966 with the 426-cubic inch Hemi V-8 and four-speed manual transmission. The 425 horsepower engine is legendary, and made the Coronet 500 something to be seriously feared on the street.

Fitted to this car are all the luxury features of the Coronet 500, including a power convertible roof, push-button radio, front bucket seats, and tinted glass. This rare open-top Hemi is offered as part of the BRP Collection, which includes an array of muscle from the 1960s. 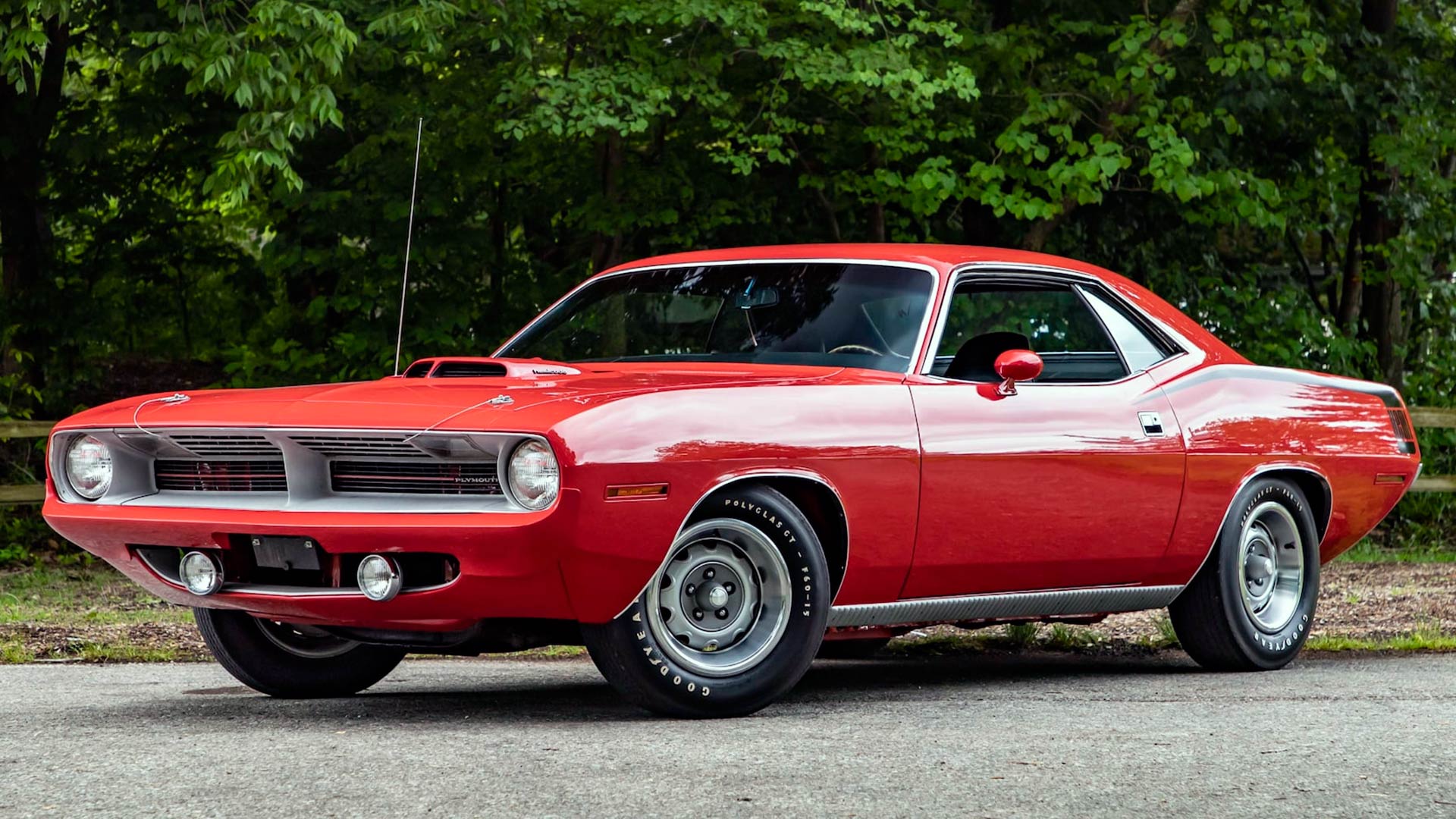 Bruce Springsteen sang about Hemi-powered drones screaming down the boulevard, and this beautiful 1970 Plymouth Cuda is ready to hit the road. Following a two-year restoration, as one of just 284 Hemi Cudas fitted with a four-speed manual transmission, this is a prime collectible car.

Once featured as the ‘Christmas Centerfold’ in a 1994 edition of Summit Magazine, this Cuda has covered just 1,032 miles since the restoration. It has also been stored in a climate-controlled garage, and now looks ready to thunder down the highway. 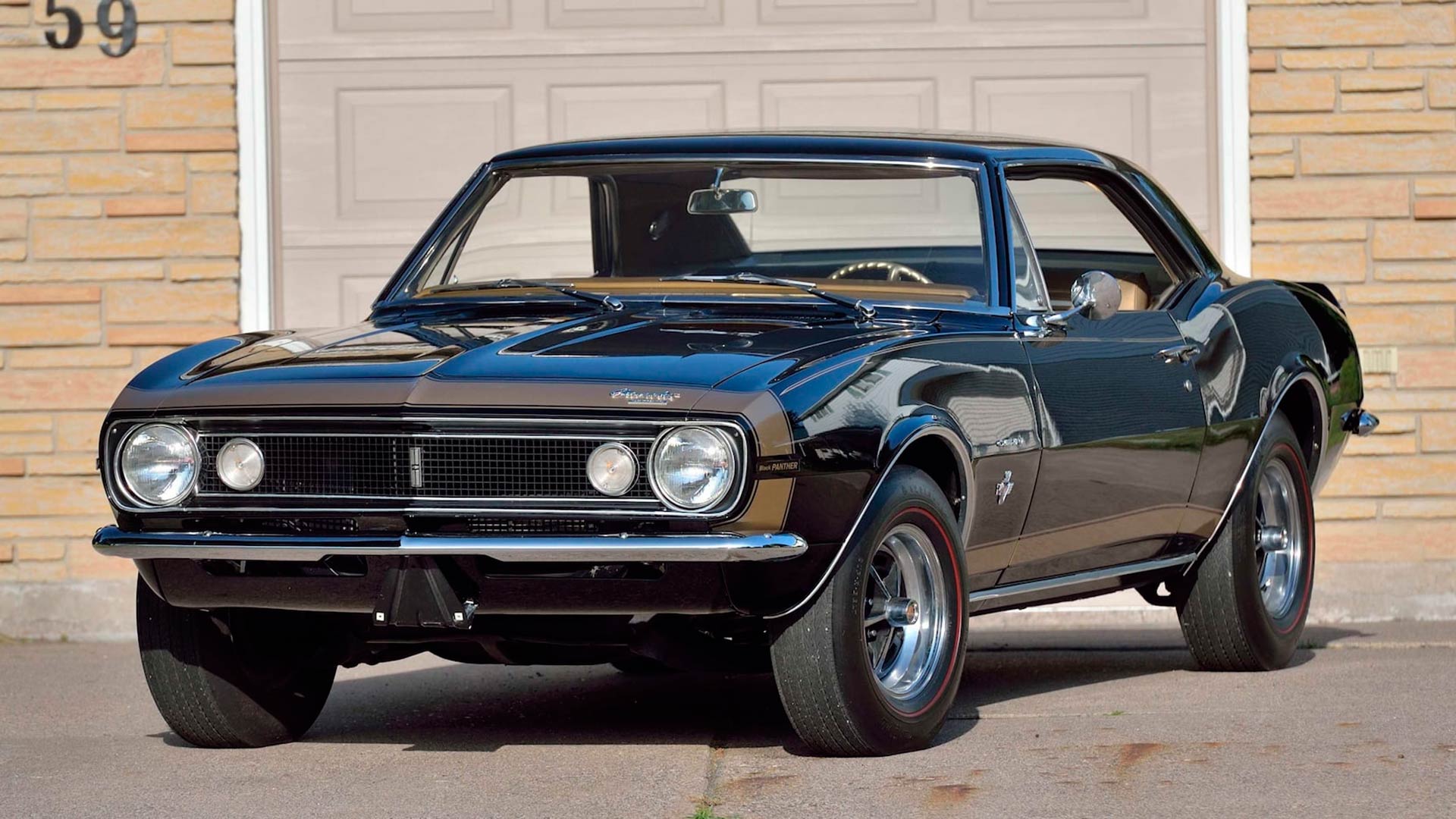 The Black Panther was an early special edition, created by the Toronto-based Gorries Chevrolet/Oldsmobile dealership to add some extra motorsport muscle to the then-new Camaro. Only 50 are estimated to have been created, and this is one of just three surviving examples maintaining its original bodywork and engine.

Black exterior paint was complemented by gold stripes, plus a deluxe interior also finished in gold. This car, possibly one of the first produced, features a James Bond-inspired ‘007’ hidden switch panel in the center console. Power comes from a 327-cubic inch V-8 engine, with an automatic transmission. The car was subject to a thorough restoration in 2002. 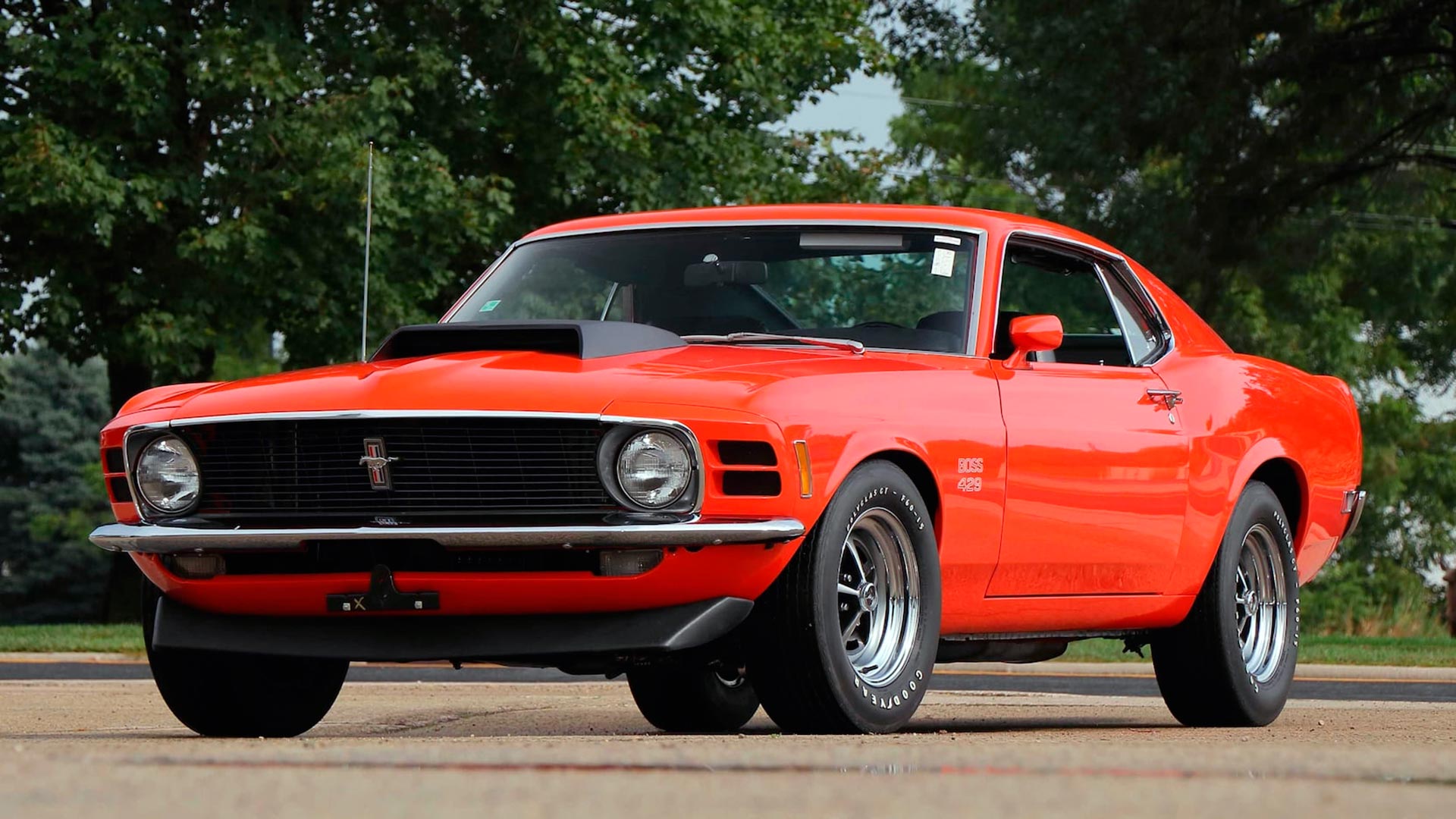 One of the most iconic muscle cars ever created, the Boss 429 Mustang was also responsible for sparking the passion of one particular car collector. This Boss kickstarted the Garlin Collection, which will see 15 vehicles sold in Chicago. One of 499 examples made in 1970, this Boss 429 features 14 factory options, including competition suspension and a Drag Pack.

Only 26,000 miles have been covered by the 429-cubic inch V-8 engine, with the three previous owners resisting the temptations of the 375 horsepower performance. Fitted with a four-speed manual transmission, expect large bids for this deeply collectible Mustang. 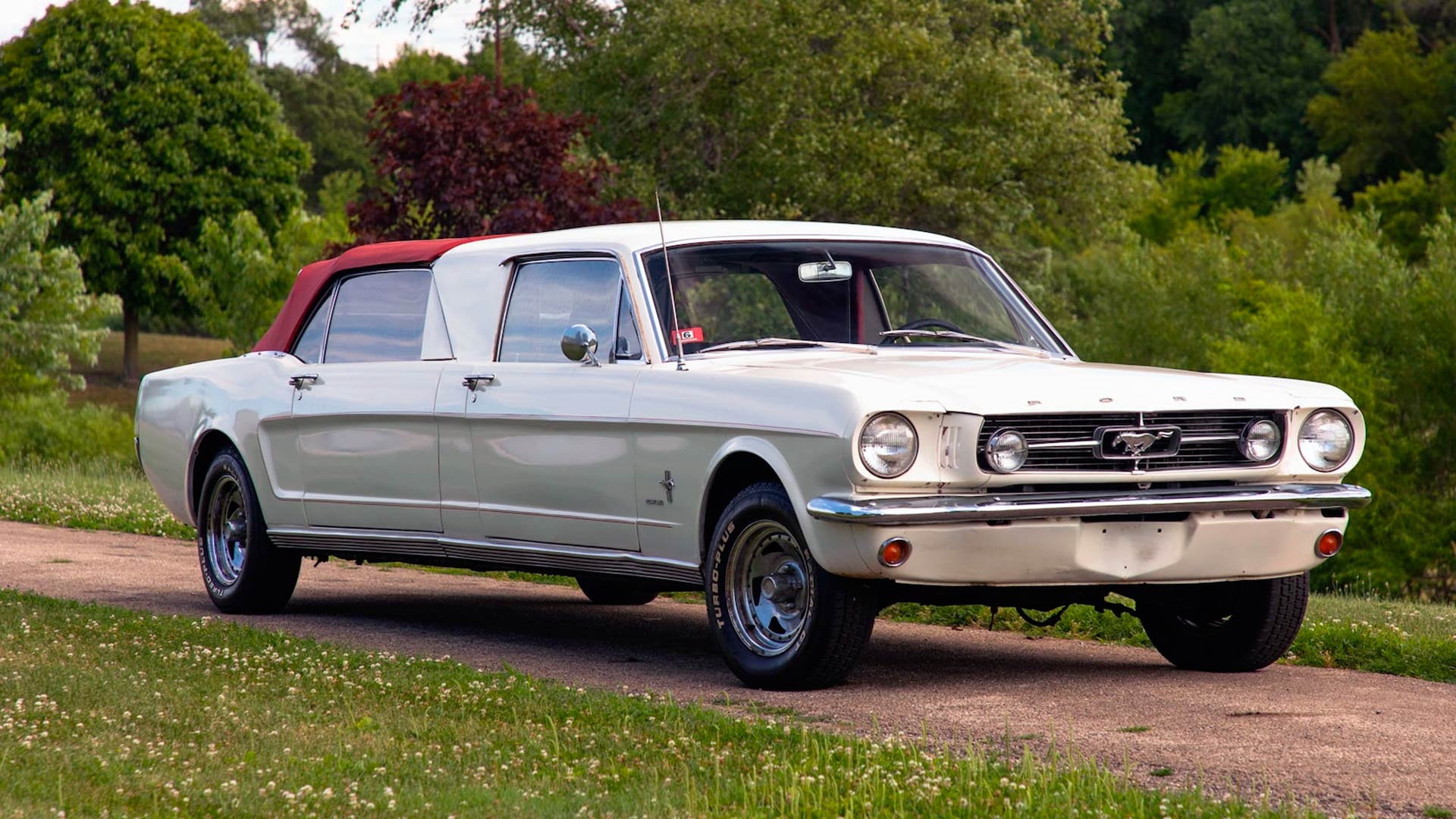 No, your eyes are not deceiving you. This truly is a limousine created from two first-generation Ford Mustangs spliced together. Unfortunately Mecum does not have too much information on how (or why), but it could certainly make a talking point at any car meet.

Rear passengers can enjoy topless motoring thanks to the convertible rear end, whilst a small-block V-8 engine can be found under the hood of the front Mustang. As part of the Petrozzini Estate, this car has been in long-term storage, but has been shown to start in the past 30 days. 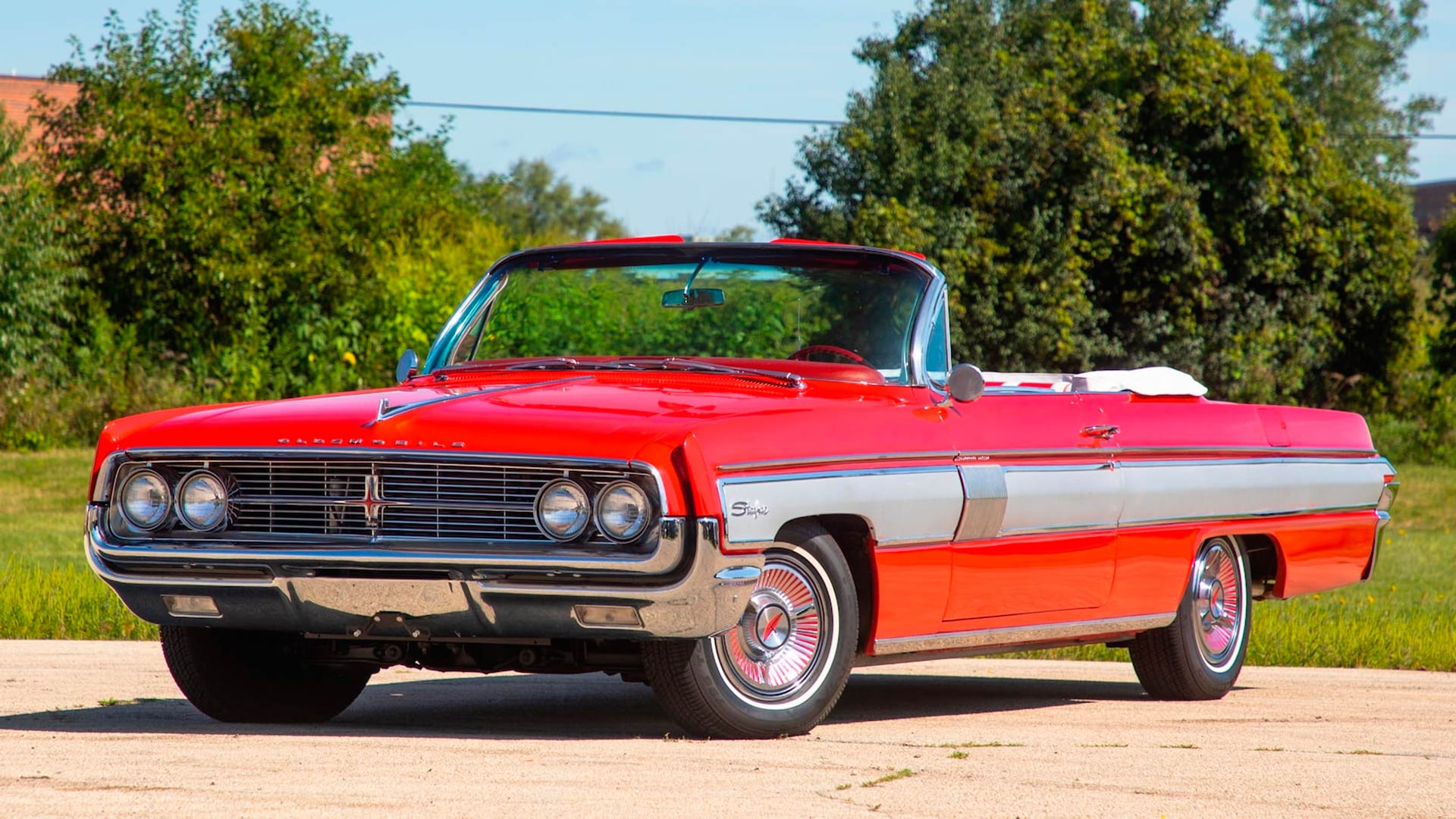 Introduced as a distinct model in 1961, the Oldsmobile Starfire saw its most successful year twelve months later in 1962. More than 7,100 examples of the convertible were sold, but this is said to be one of 15 finished in distinctive Chariot Red, along with a red and white leather interior.

A 394-cubic inch Rocket V-8 produces a healthy 330 horsepower, with a four-speed automatic transmission part of the deal. Another car from the Frank Karabetsos Collection, this one features a high standard specification including air conditioning, Wonderbar radio, rear speakers, and Deluxe wheel covers. 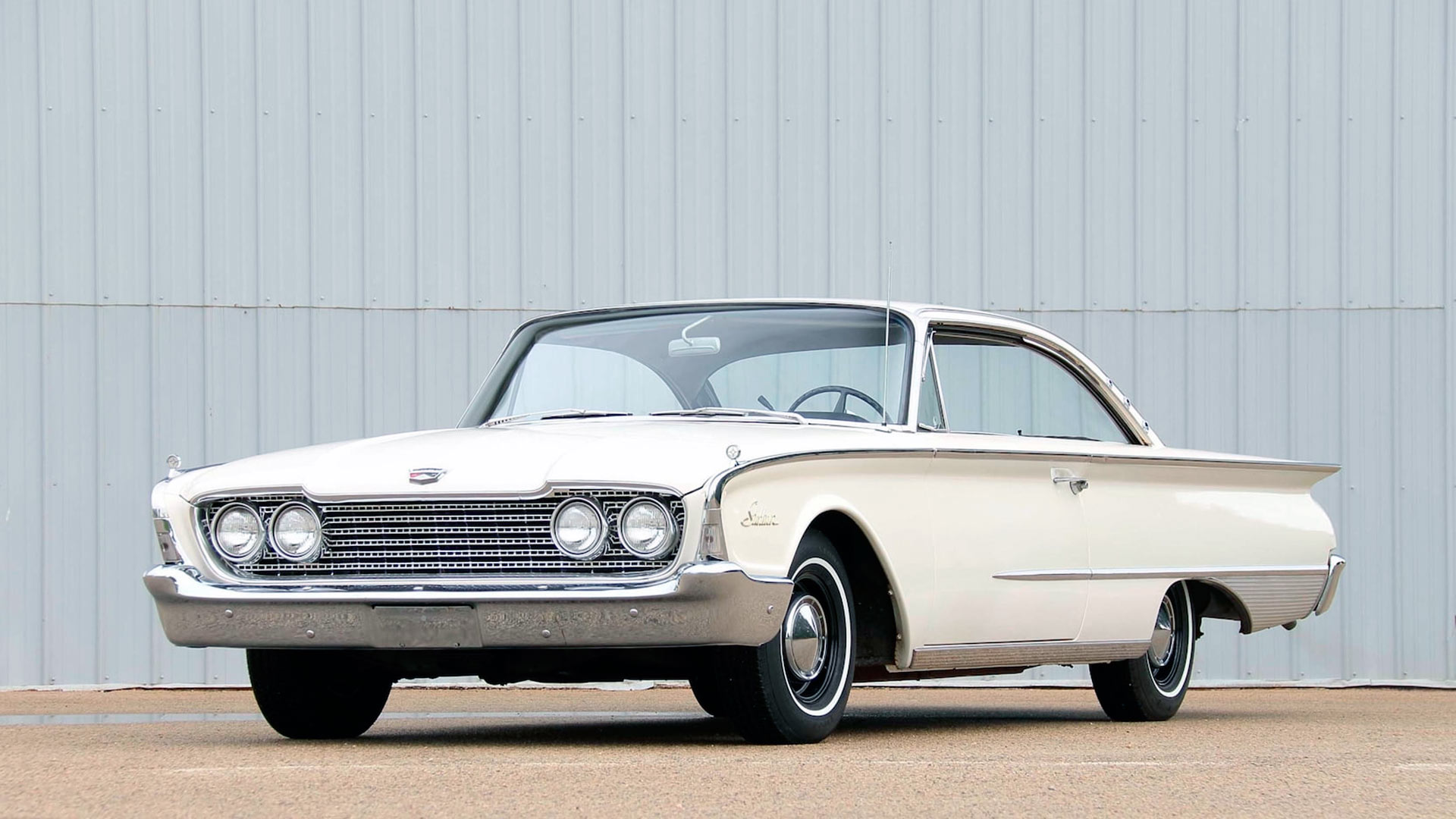 Much like the Aero Warriors featured at the start of this gallery, the Galaxie Starliner found fame from use in NASCAR. Thin roof pillars and a swooping fastback design made it perfect for high-speed use in motorsport competition. Sold for only two years, the Starliner is a rare find and one for keen Ford collectors.

Making this one even more special is the fact it comes fitted with the optional 352-cubic inch V-8 engine. The paintwork for this car is said to be mostly original, whilst the interior is also as it left the factory. Only 49,400 miles are said to have been covered, with the Galaxie also supplied with the window sticker from its original sale. 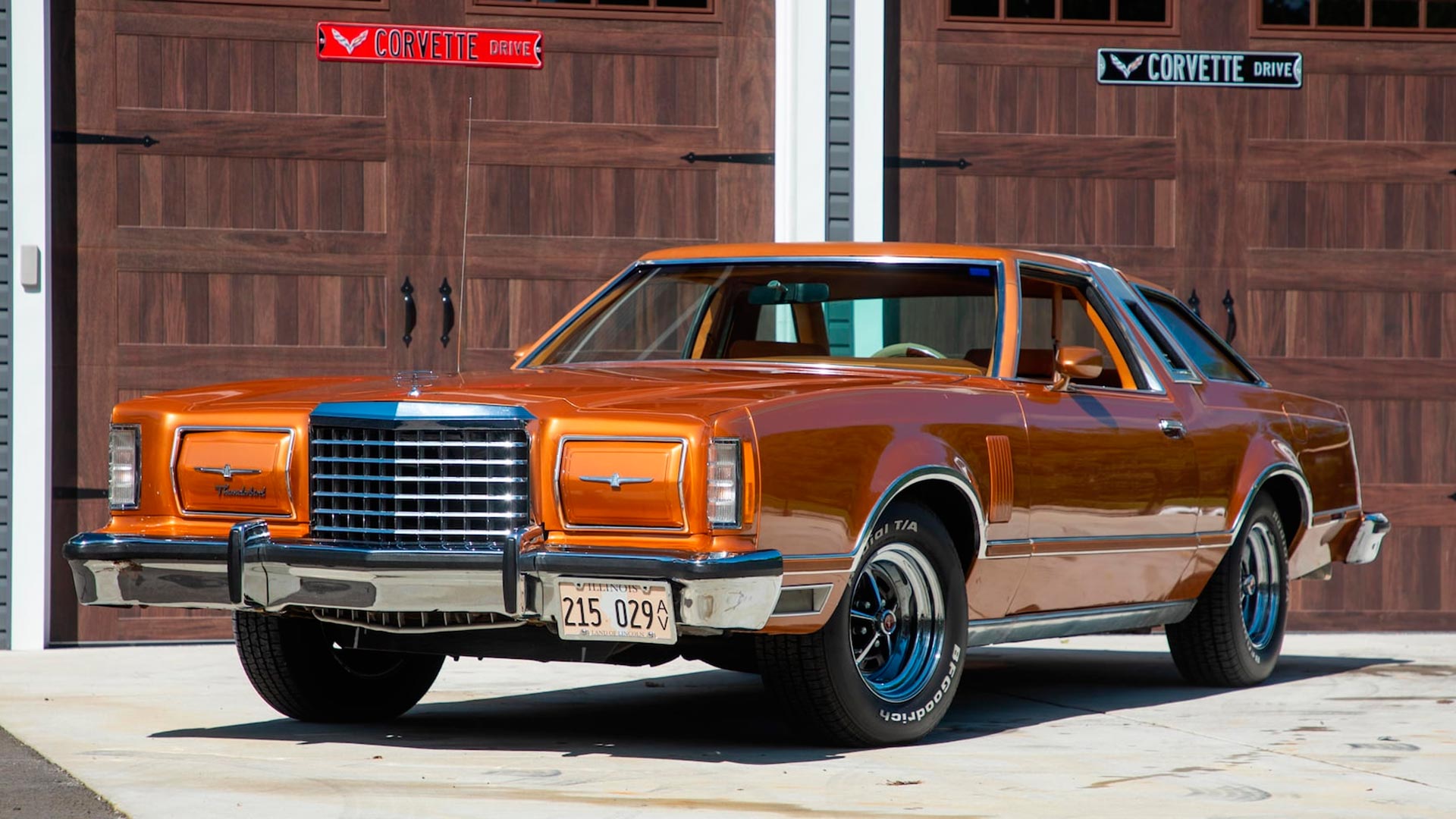 The seventh-generation of the Ford Thunderbird may have been smaller than its predecessors, but it was still a sizeable personal luxury car by most standards. More than 955,000 found homes in three years of production, with this one remaining as a shining example of fashion from the late 1970s.

Beneath the lengthy hood is a 400-cubic inch Cleveland V-8 with an automatic transmission. This car benefits from new paint, a new exhaust system, new wheels, new air conditioning components, and also new brakes. Total mileage is listed as just 29,000, leaving lots of luxury motoring left in this land yacht. 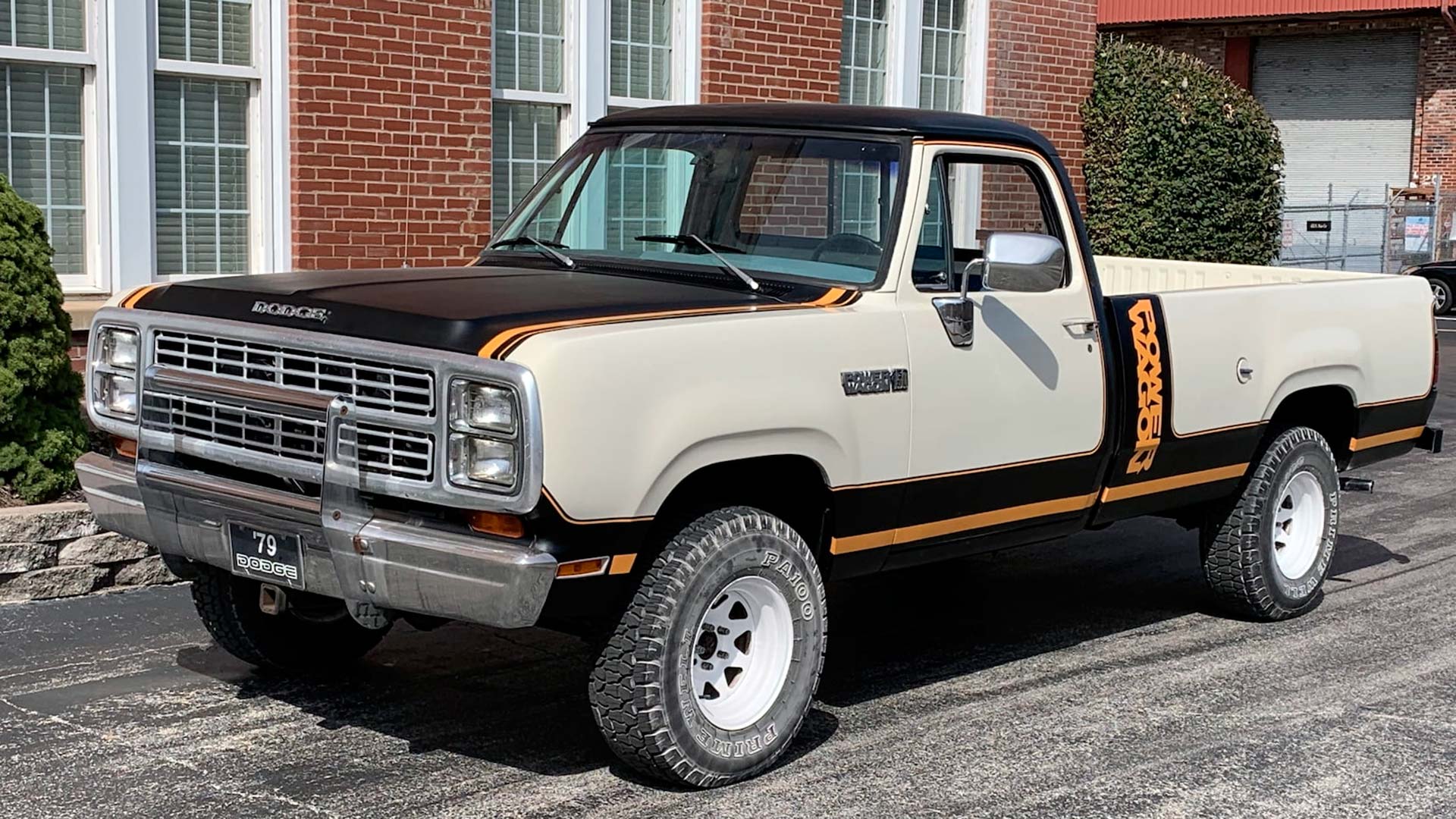 In the late 1970s, Dodge wanted to appeal to male buyers with a version of the D series pickup made as masculine as possible. Enter the Macho Power Wagon, with bold body decals and a range of contrasting color options. This one appears to have lost the standard-fit roll bar, but has retained the painted Wagon wheels.

Under the hood is a 318-cubic inch V-8 engine and, like all Macho Power Wagons, a four-wheel drive transmission. Air conditioning and a blue interior are also present, with this truck likely to find appeal amongst dedicated collectors. 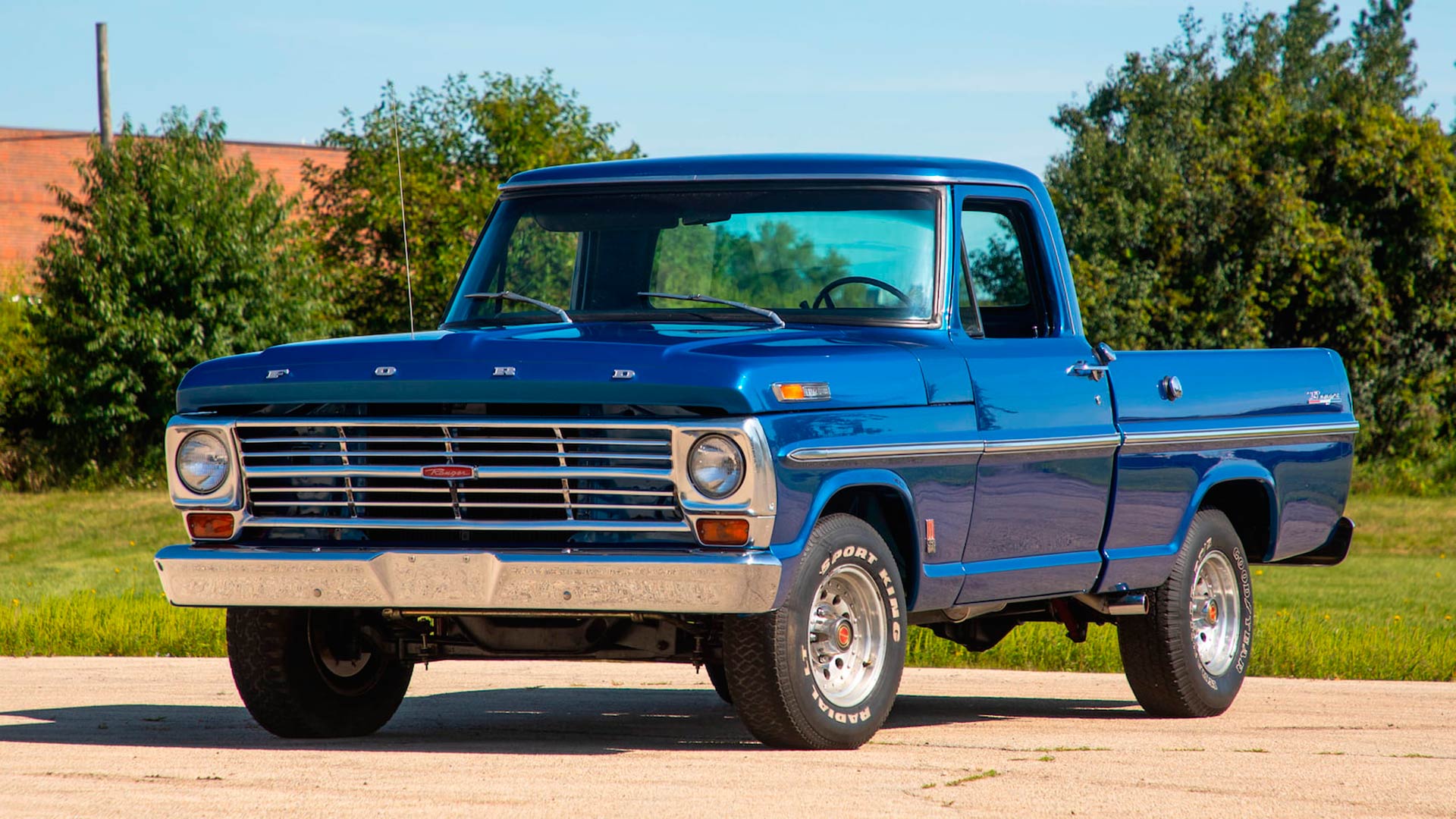 The fifth-generation F-Series truck range was intended to offer greater comfort and performance. Also part of the Frank Karabetsos Collection, this F100 Ranger has been subject to a frame-off restoration, with the Styleside short bed body fully repainted in deep metallic blue.

An aftermarket exhaust and new air cleaner have been fitted to the 390-cubic inch V-8 engine. Also fitted is an automatic transmission and a Dana rear differential, whilst the interior bench seat has been covered in gray fabric. 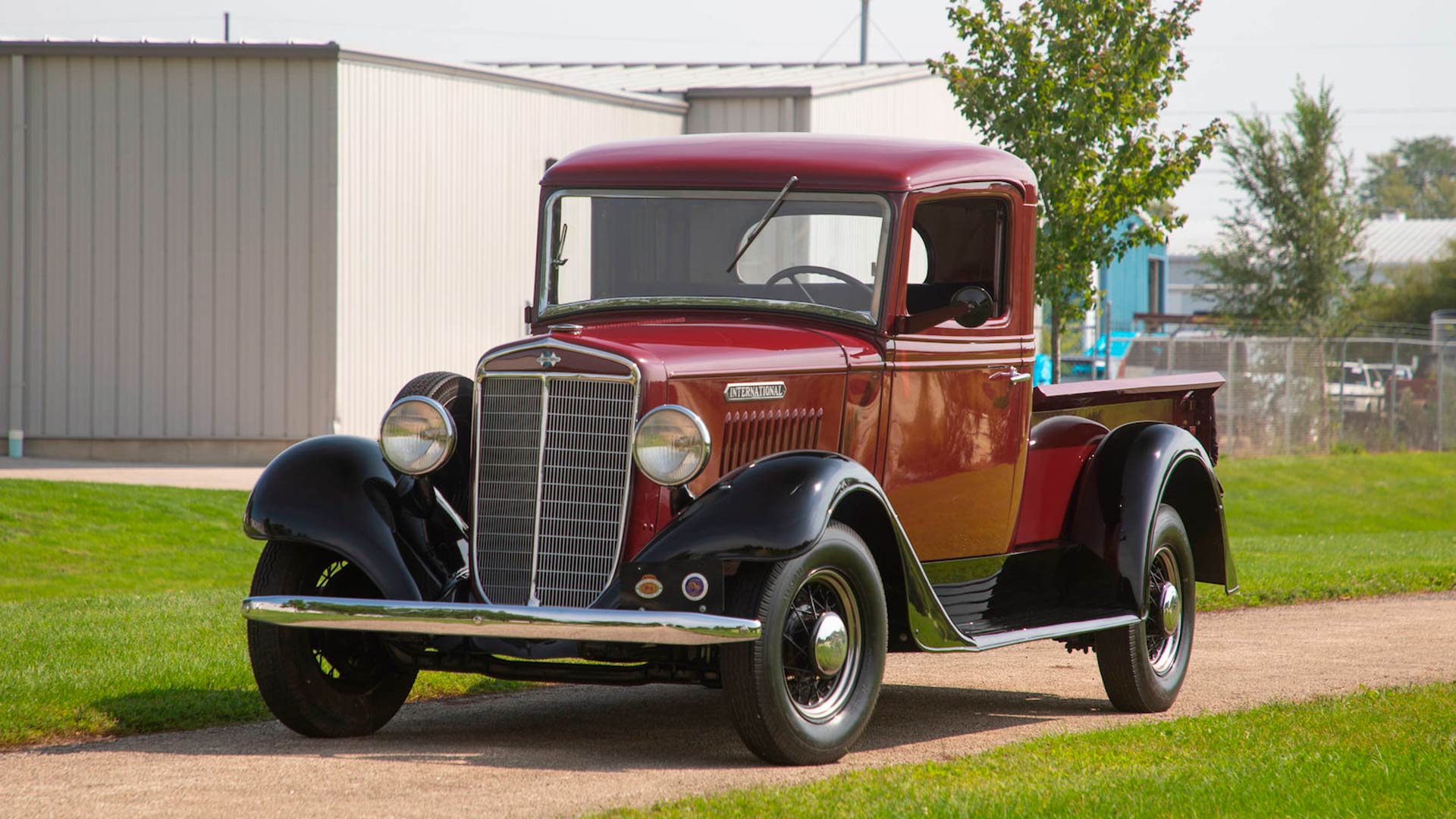 This 1935 truck has been awarded AACA National Senior status in the past, which is a testament to its impressive condition. A 213-cubic inch six-cylinder can be found under the hood, with gears shifted by a three-speed manual transmission. It could make a useful new addition for any vintage truck collection. 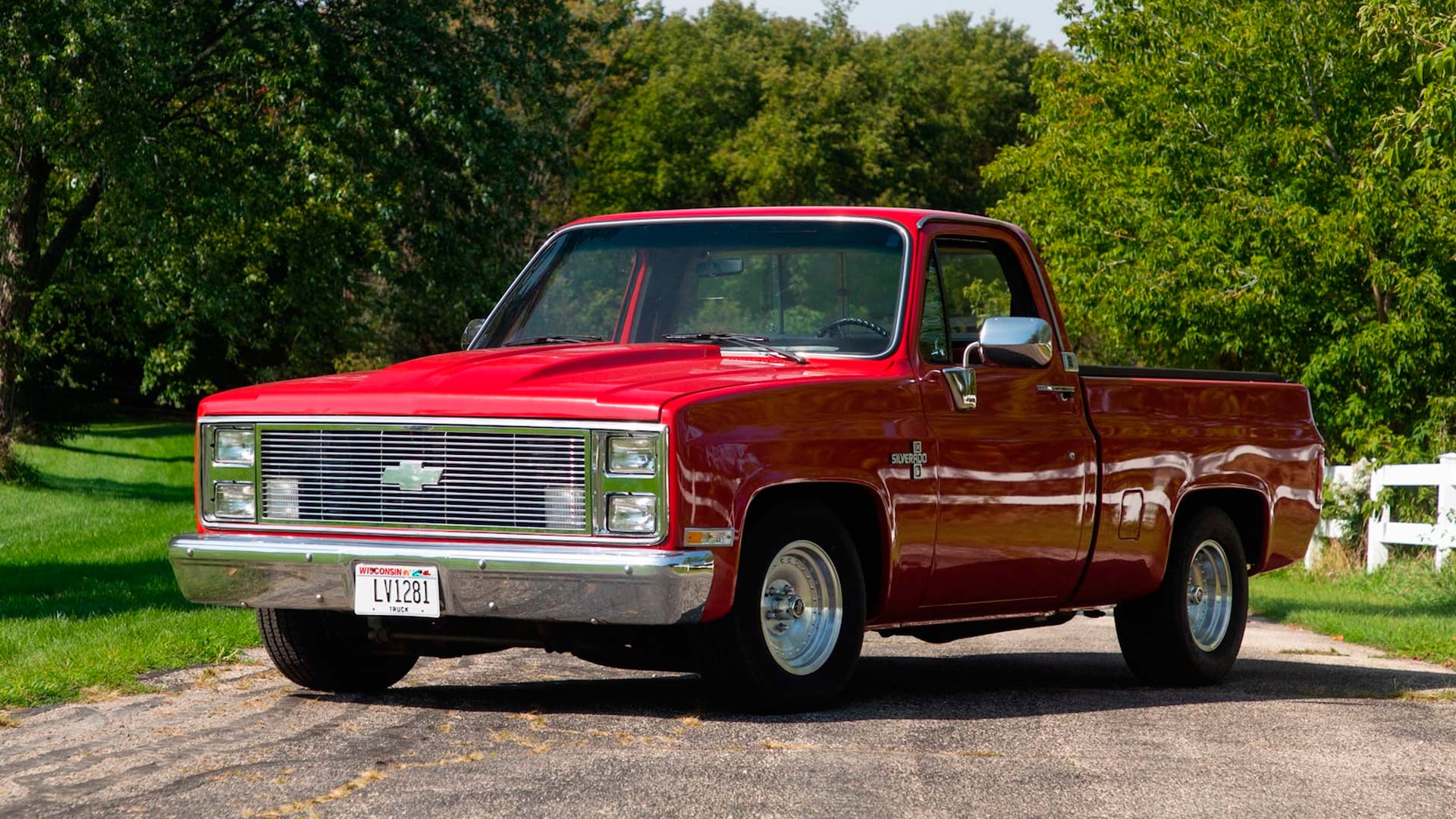 Late versions of the ‘box body’ third-generation of Chevrolet pickup trucks are becoming highly collectible. This 1986 C10 Silverado appears to be in superb condition, being presented as part of the Dennis Barton Collection at the Mecum Chicago sale.

Driving this truck is a 327-cubic inch V-8 engine, which has been bored to give extra displacement. Total output is rated as 350 horsepower, which should make this a rather rapid C10, with an automatic transmission responsible for swapping the cogs. Inside is a bright red interior, matching the lustrous exterior paintwork. 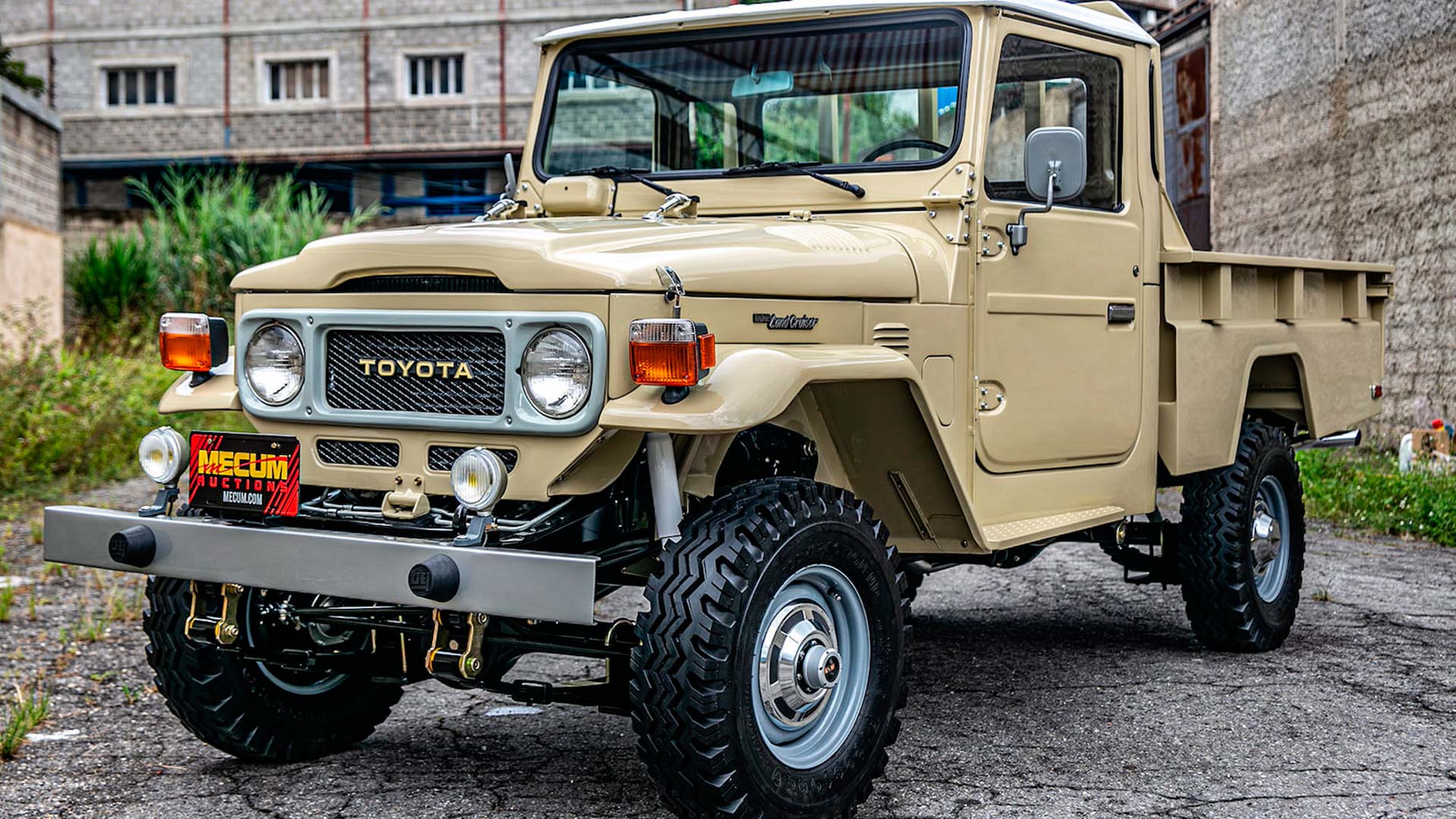 Built for almost 25 years, the FJ45 series of Toyota Land Cruiser models has an almost legendary reputation for dependability. If you want a reliable classic pickup, this 1985 model could be just what you need.

Further enhancing the usability is that this particular truck has been subject to a complete frame-off restoration. This has included period-correct beige exterior paintwork, whilst the interior has benefitted from new brown leather upholstery. Power steering, a four-speed transmission, four-wheel drive, and a 130-cubic inch six-cylinder engine are also present and correct. 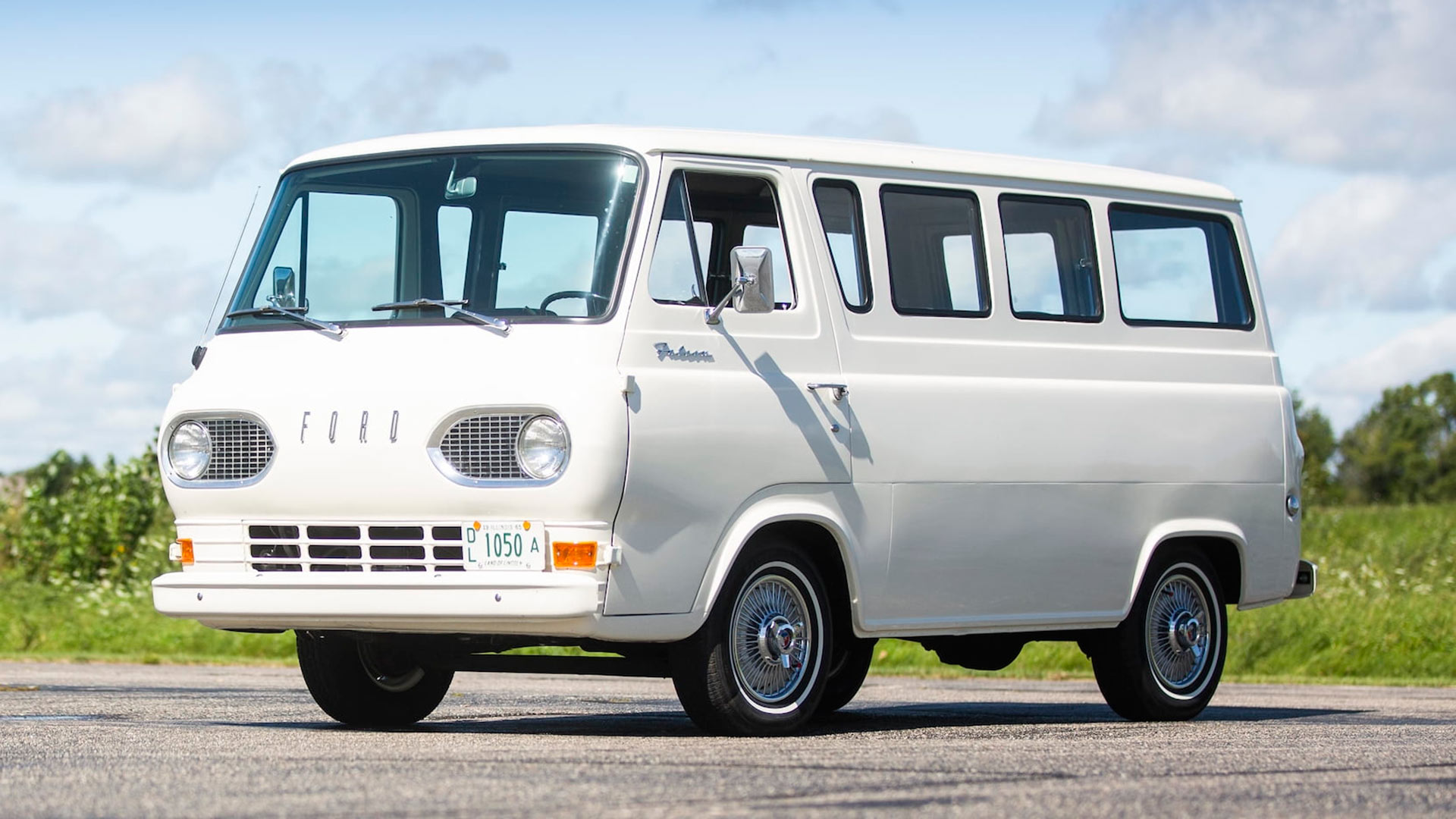 It is easy to forget that the Ford Falcon car range also gave its name to a version of the first-generation Ford Econoline van. Unlike the Falcon sedan, the Club Wagon used a mid-engined layout, with this particular model powered by a 240-cubic inch six-cylinder engine nestled between the front seats.

Noted to originally have come from New Mexico, this Club Wagon underwent a bare metal restoration. Numerous new-old-stock parts were said to have been used in restoring this van, which features a blue exterior to contrast with the white paintwork. 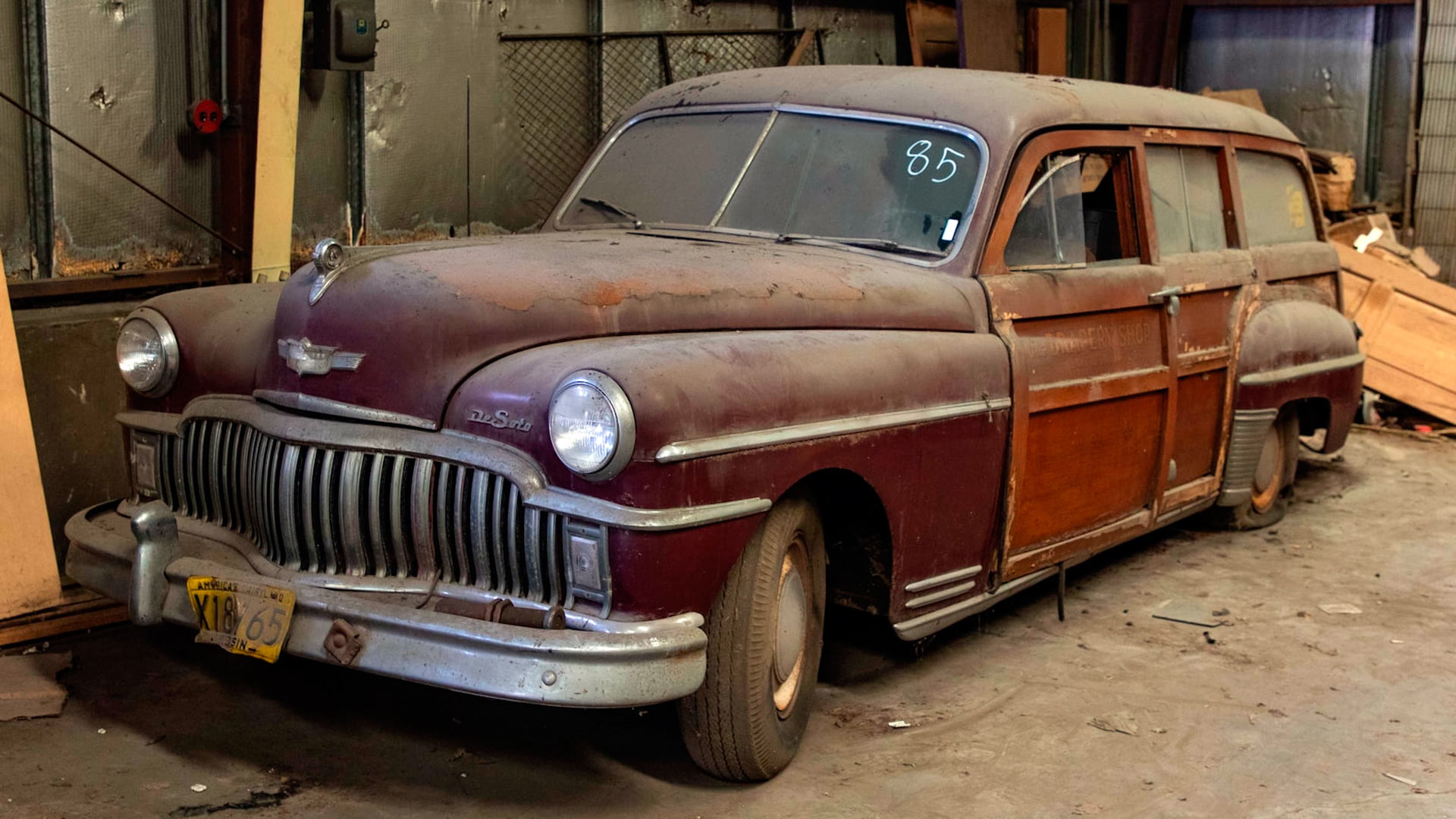 Desoto is reported to have made woody station wagons for just one model year, with only 850 examples produced in that time frame. Previously used by a drapery shop, this particular car can be described as a genuine barn find.

As part of the Petrozzini Estate, this wagon is clearly going to be need of some attention to get it back on the road. Mecum advises interested buyers to consider attending the auction in person to view these vehicles before bidding. Restoring this Desoto, powered by a 237-cubic inch six-cylinder engine, would result in a rare example of a woody wagon. 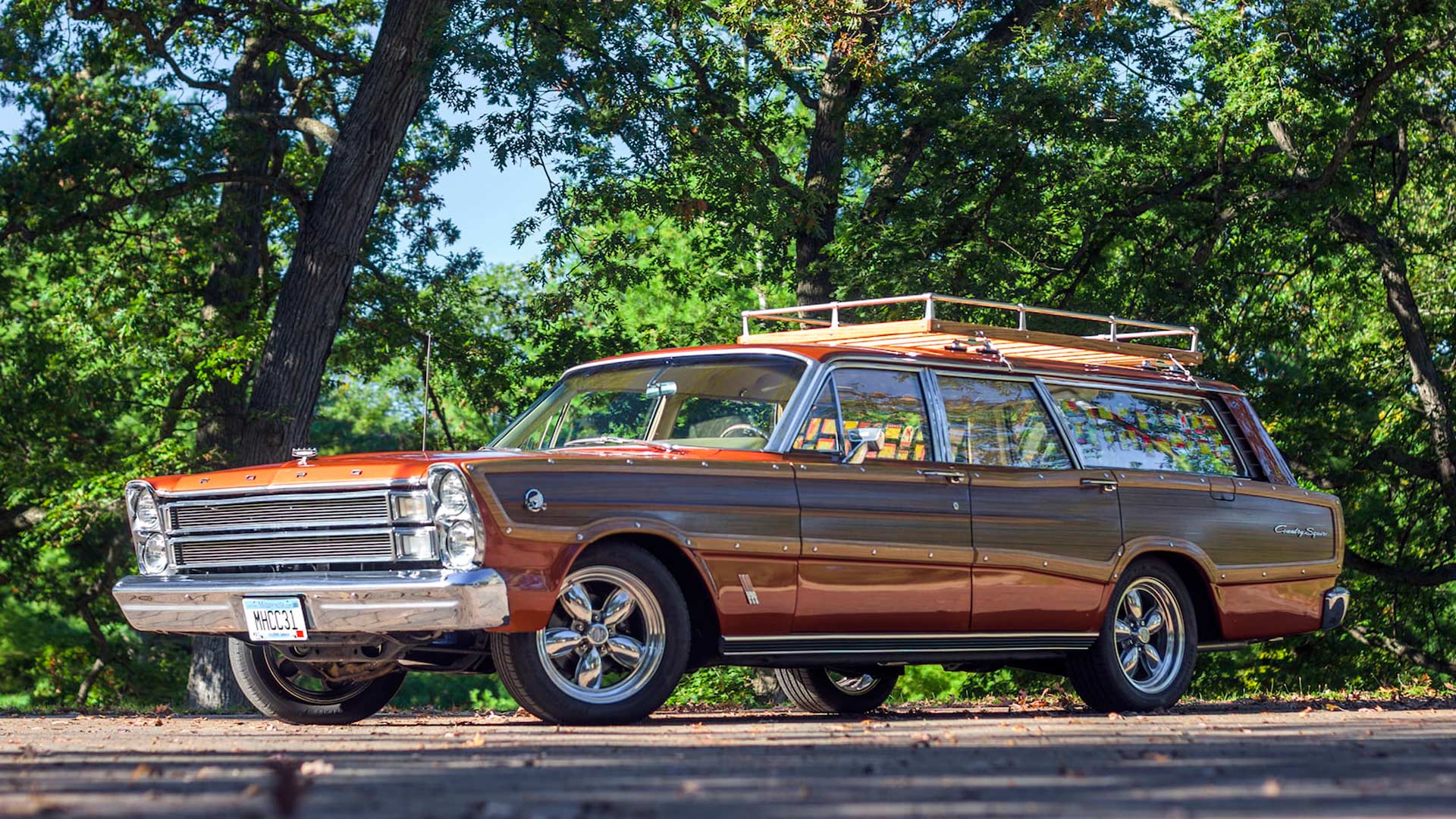 Another woody station wagon, but one featuring vinyl wood grain instead. The sixth-generation of Ford Country Squire offered even more options for passengers, with this particular example offering space for nine thanks to the front bench seat and folding third row.

Rare options include the 390-cubic inch V-8 engine with 4 barrel carburettor, offering up 315 horsepower. A dual exhaust has been fitted, along with Wilwood power brakes and a set of aftermarket American Racing wheels. The luggage rack on the roof is an original item, and comes complete with fitted Samsonite luggage. 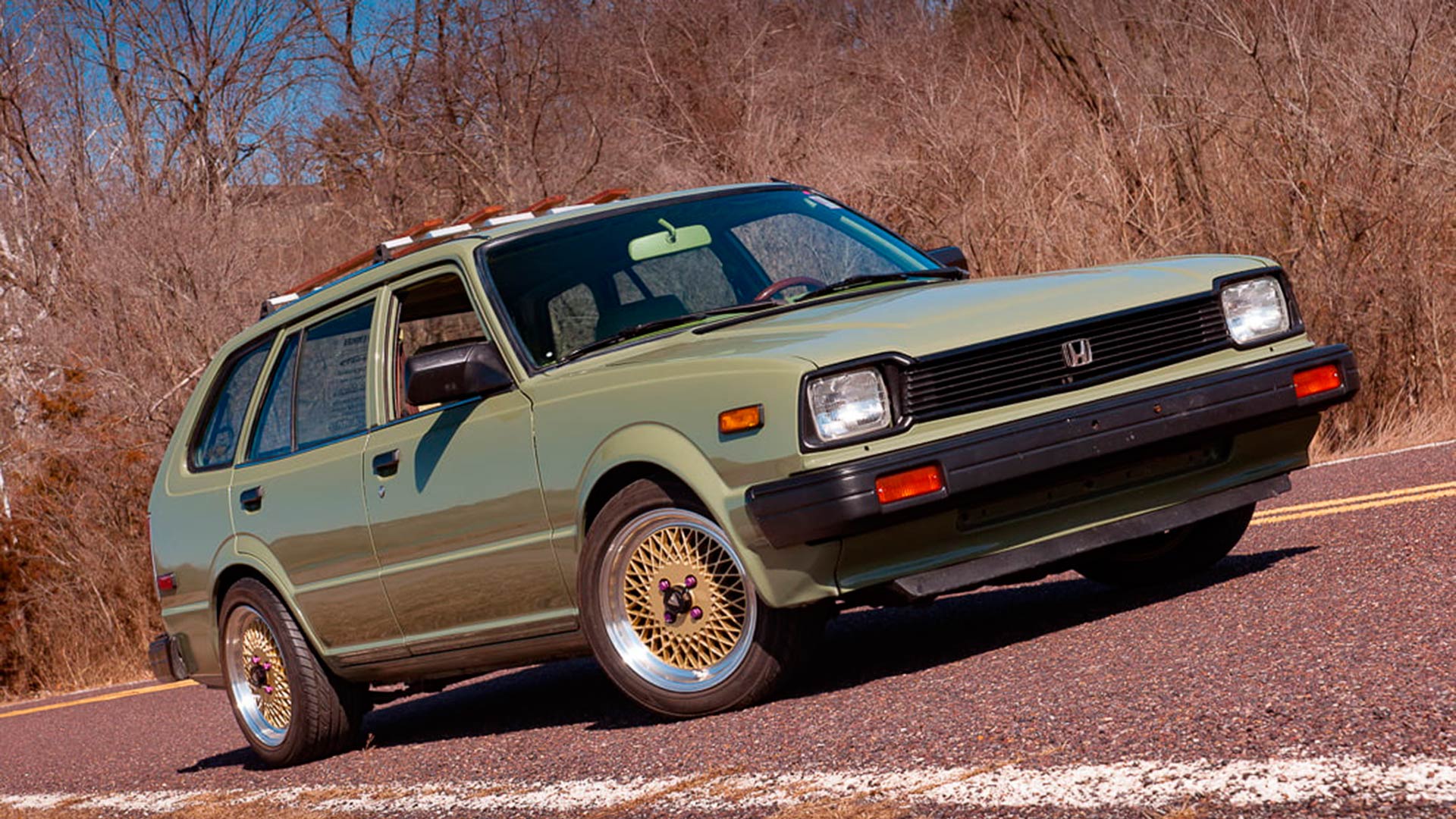 Built and owned by TV presenter Rutledge Wood, this second-generation Honda Civic Wagon has undergone extensive customization. The biggest news is under the hood, where a 1.8-liter four-cylinder engine from a 1995 Acura Integra LS has been added, along with a five-speed manual transmission.

Inside are Recaro sports seats from a Volkswagen GTI, along with the steering wheel from a Jetta GLI. Lowered suspension gives an aggressive stance on the 15-inch Enkei alloy wheels, with a front splitter also taken from a VW GTI. The distinctive exterior paint is an original Nissan ‘Tank Green’ hue, with the interior finished in matching green plaid.