When hybrid cars first emerged on the market at the turn of the century, their higher price tag was justified by their lower tailpipe emissions. Purchase prices have been steadily lowering since then, however, meaning that the hybrid option might actually save money in the long run. Being green is finally paying off.

We decided to compare some of America’s most popular new vehicles that are available in both conventional and hybrid variants to see how the numbers will stack up.

We calculated the average price of fuel in America for 2019-2024 as $2.61 using data collected by the U.S. Energy Information Administration, creating a trend line for previous years, and projecting forward with adjustments for inflation. While speculative, the number does give us something concrete to play with.

Yearly fuel usage was calculated using the national average of 15,000 miles driven per year. Emissions data was collected from the U.S. Department of Energy.

Honda Accord Hybrid and LX 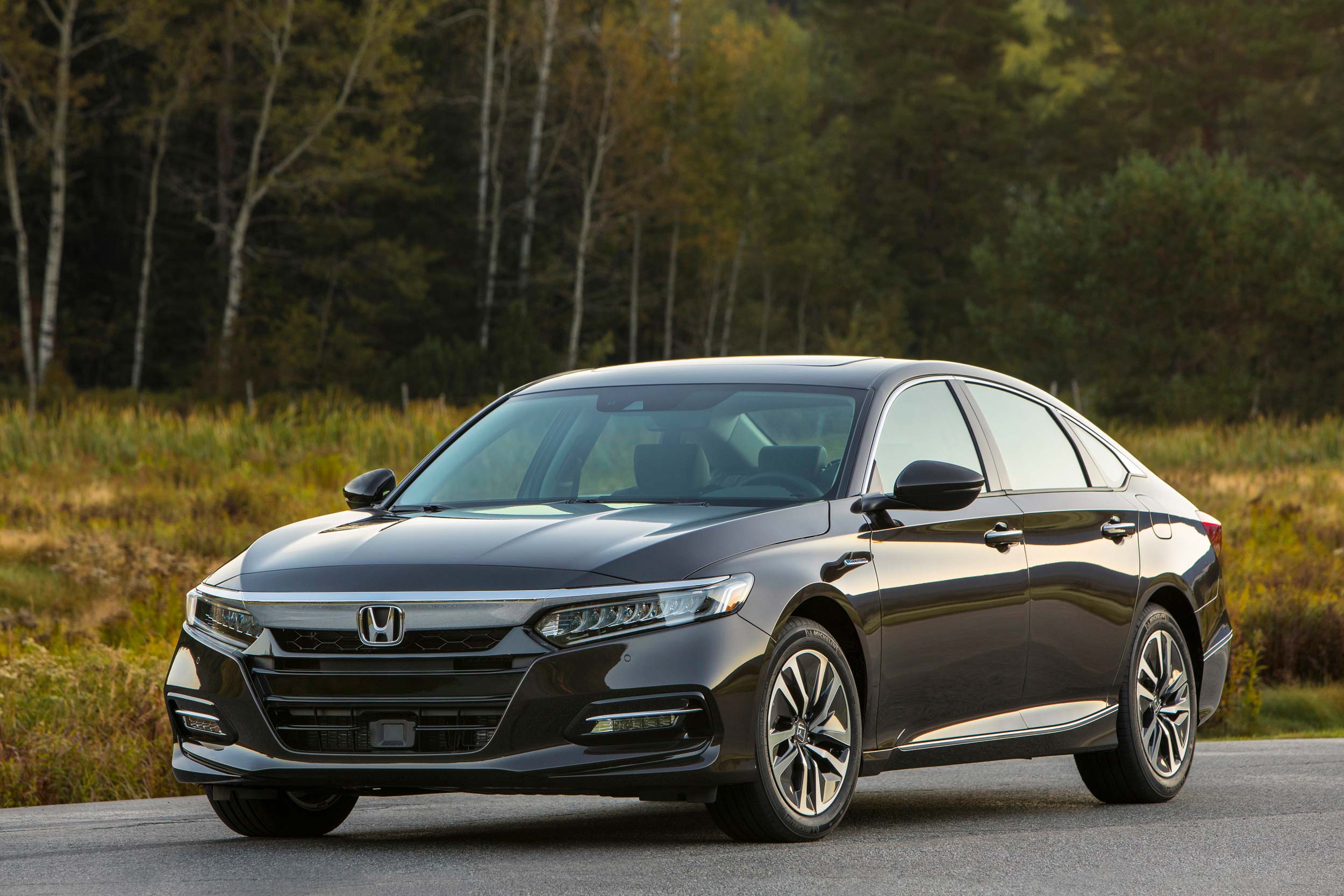 The Honda Accord Hybrid comes in at $2,520 more than the conventional LX base model, but offers more horsepower (212 versus 192) and significantly better fuel economy (48 mpg in the combined cycle versus 33).

Every year, Accord Hybrid owners save $371 in fuel costs compared to LX owners. At that rate, it would take just six years, nine months, and 15 days for the savings to be greater than the difference in purchase price.

Even bigger savings are realized at the tailpipe. While both vehicles are environmentally sensitive, the ultra-clean Hybrid emits 1.4 fewer tons of CO2 per year than the LX (3.0 tons versus 4.4). Over five years, that adds up to a whopping seven fewer tons of greenhouse gasses in the atmosphere.

Being eco has never been so rewarding. 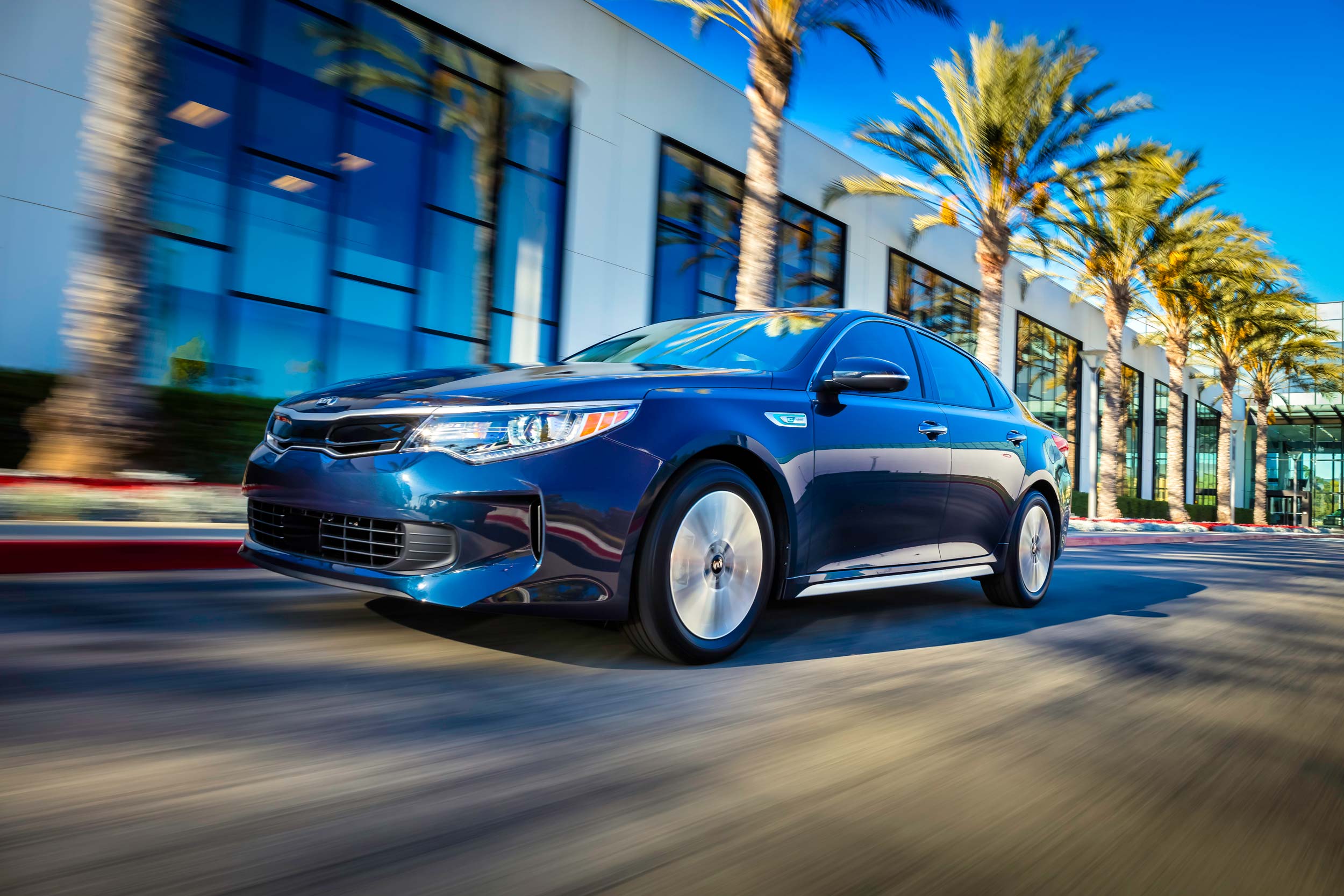 In mid-grade EX trim, the Kia Optima comes with a choice of two powertrains: there’s a conventional 1.6-liter turbo engine with 178 horsepower on tap, or buyers can select a 192-horsepower hybrid powertrain for $1,200 more.

Economy jumps up, too. The hybrid returns 41 mpg in the combined cycle, meaning drivers spend will only $80 per month on fuel, $26 less than than the 31-mpg Turbo model. Those savings add up, erasing the $1,200 price difference in three years, 10 months, and 21 days, less than the term of most modern auto loans.

Higher gas mileage also means lower emissions. The Hybrid emits 3.6 tons per year of tailpipe CO2 emissions to the turbo’s 4.8. That is six tons of carbon savings in the first five years alone. 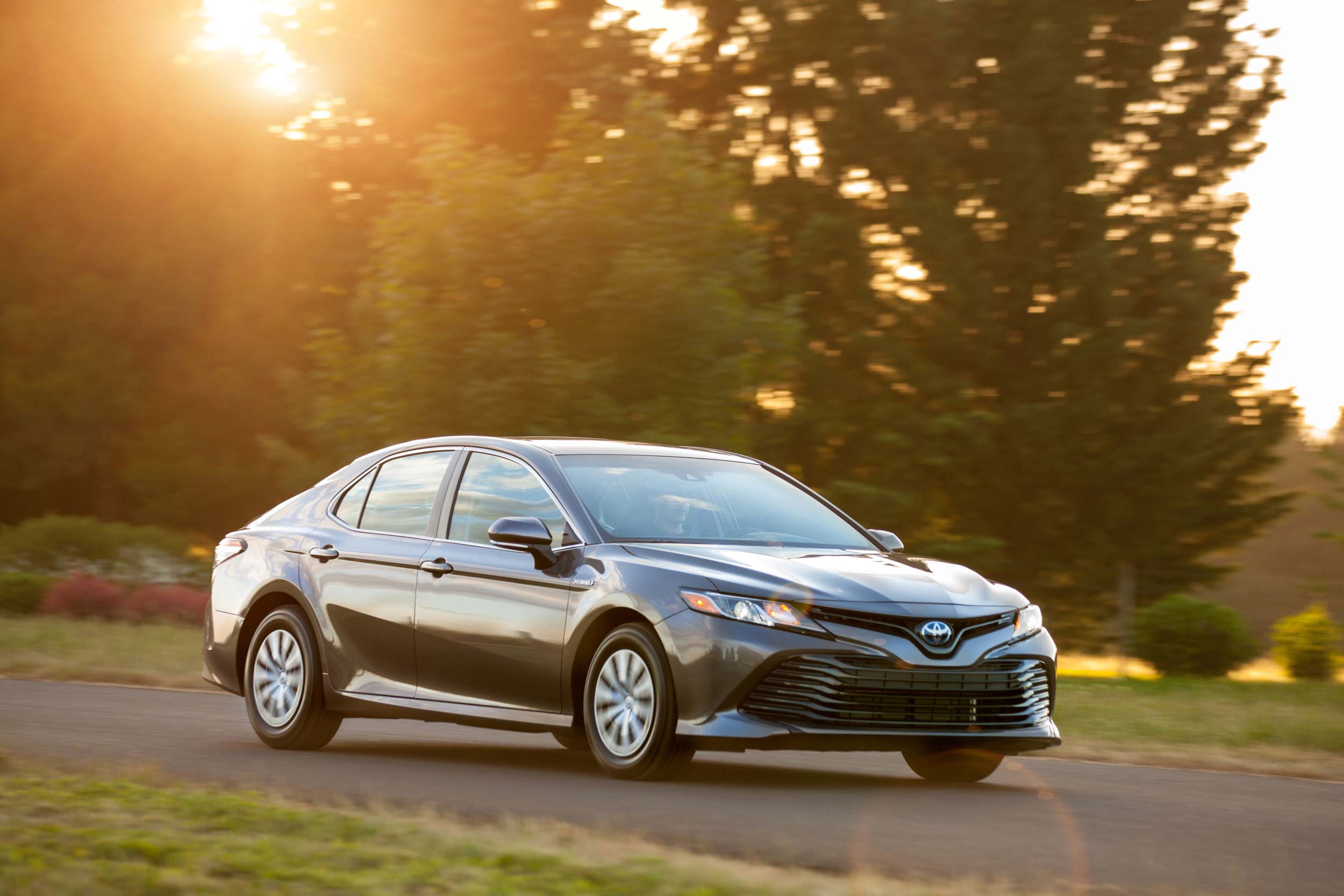 The Toyota Camry LE comes with either a naturally-aspirated 2.5-liter four-cylinder or pairs that engine to a hybrid powertrain for $3,800 more. The cars are otherwise nearly identically equipped inside and out.

The conventional engine produces 203 horsepower and returns 32 mpg in the combined cycle. Annual fuel cost is $1,223, and CO2 emissions are 4.4 tons per year.

Unsurprisingly, the hybrid is better in every respect. Economy soars to 52 mpg combined and carbon output plummets to 2.8 tons per year. Fuel cost is a meager $753 per year, a $470 saving. 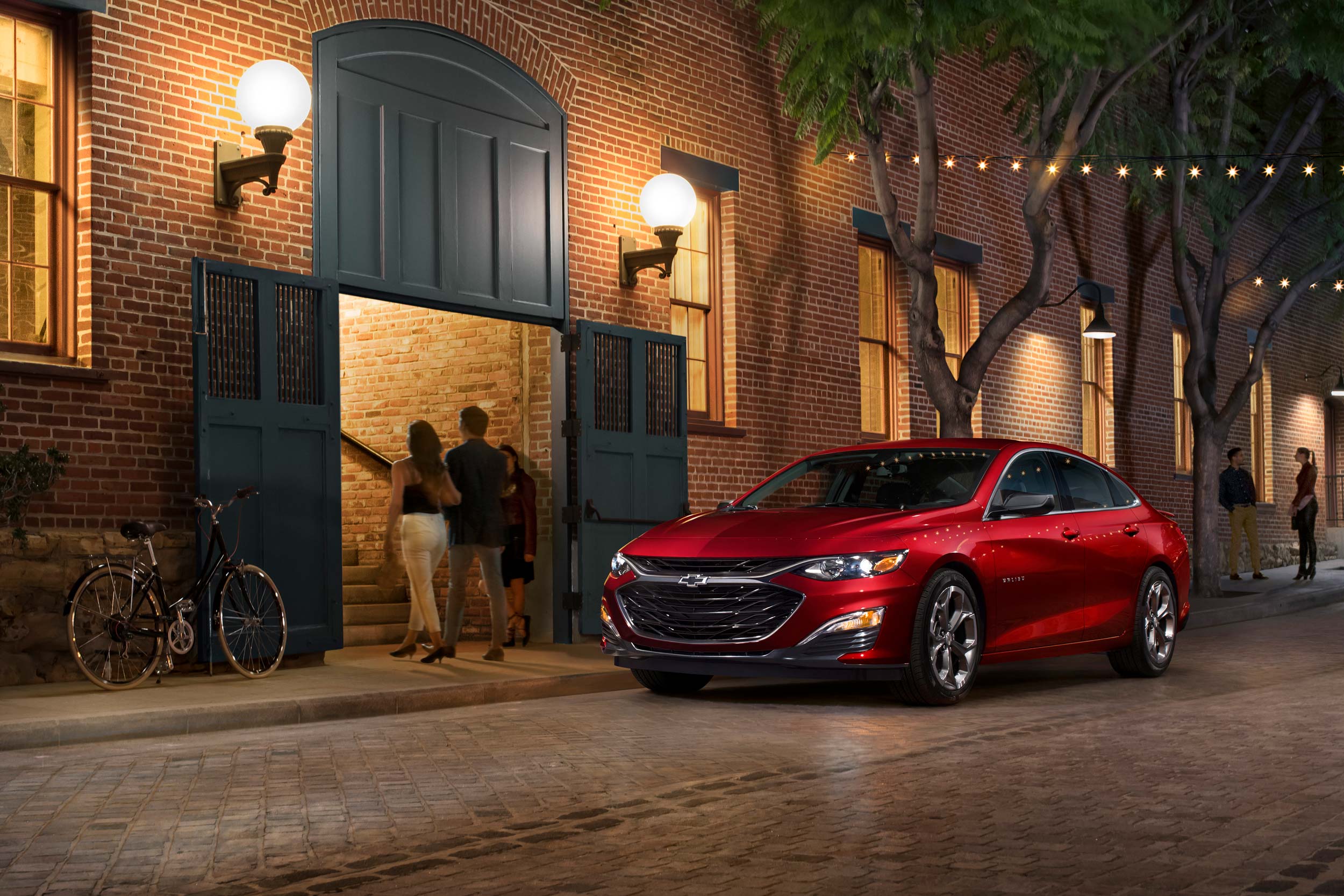 Buyers shopping the Malibu Hybrid will notice Chevrolet compares it most closely with the Malibu LT.

The conventional model uses a 1.5-liter turbo up front with 160 charging stallions on tap. The hybrid ups the output to 182 thanks to a naturally-aspirated 1.8-liter four linked to an electric drive unit with two integrated electric motors.

Hybrid drivers also get an advantage at the pump: 46 mpg in the combined cycle compares to the LT’s 32, adding up to yearly savings of $368. While the Hybrid is more expensive initially, it will take only four years, four months, and one day to be cheaper than the LT.

The Hybrid is also much easier on the atmosphere; it emits 3.2 tons of tailpipe CO2 per year compared to the LT’s 4.6. That is a whopping seven tons in just five years. 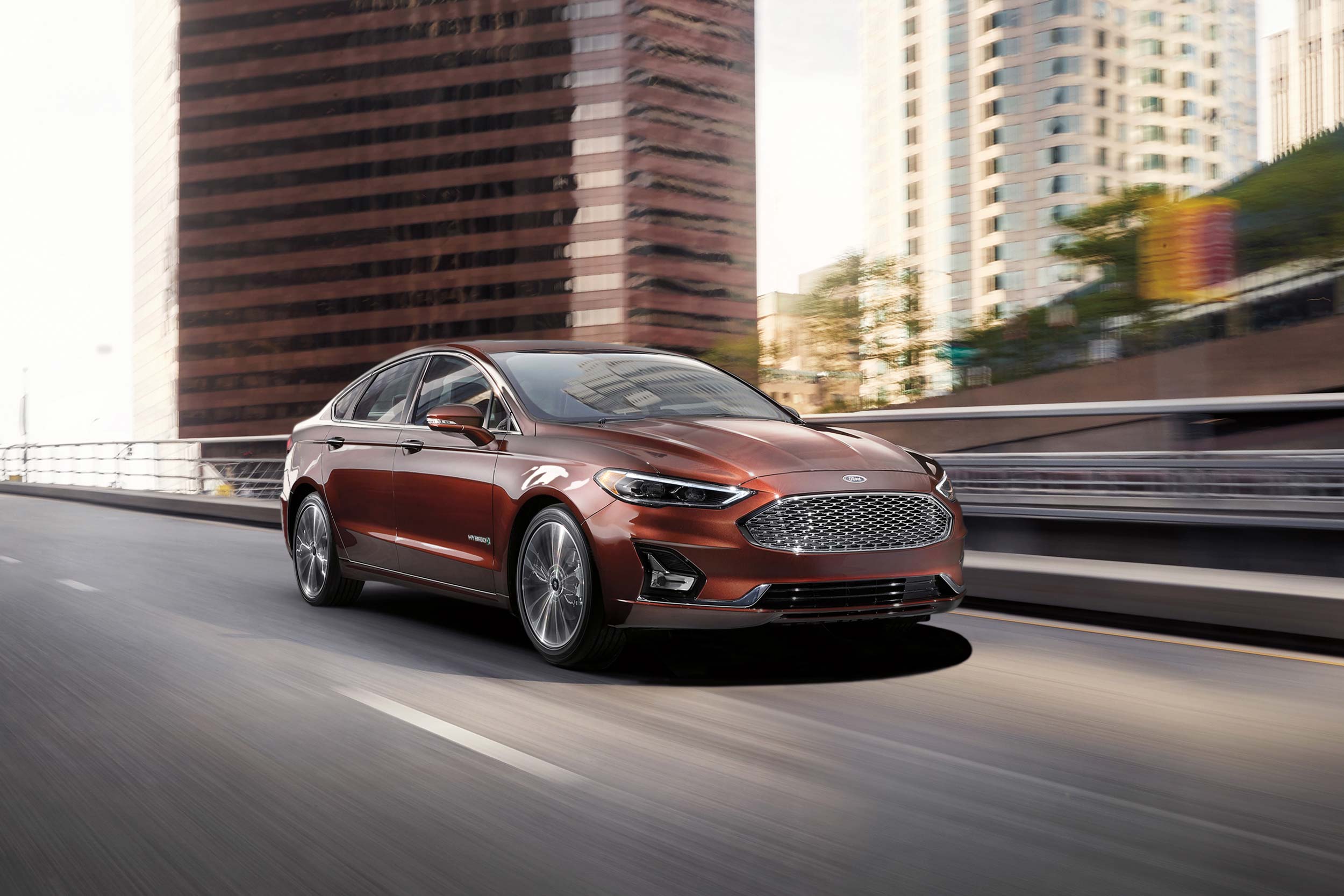 Ford may be discontinuing its Fusion midsize sedan, but it still ranks among the best-selling vehicles in America. Hybrid power is available in multiple grades, including the loaded, top-of-the-line Titanium model.

The conventional Fusion Titanium has a turbocharged 2.0-liter four-cylinder that makes a sporting 245 horsepower and returns 25 mpg in the combined cycle. Power is not freely given, however. The Titanium 2.0 costs $1,566 per year to feed and emits a panda-choking 5.9 tons of CO2.

Hybrid drivers, on the other hand, have a still-respectable 181 horsepower to play with and get 42 mpg. Fuel costs drop to $932 annually and carbon to 2.5 tons.

Over five years, Titanium Hybrid drivers will save a staggering $3,170 on fuel for the price of a $145 drivetrain upgrade. 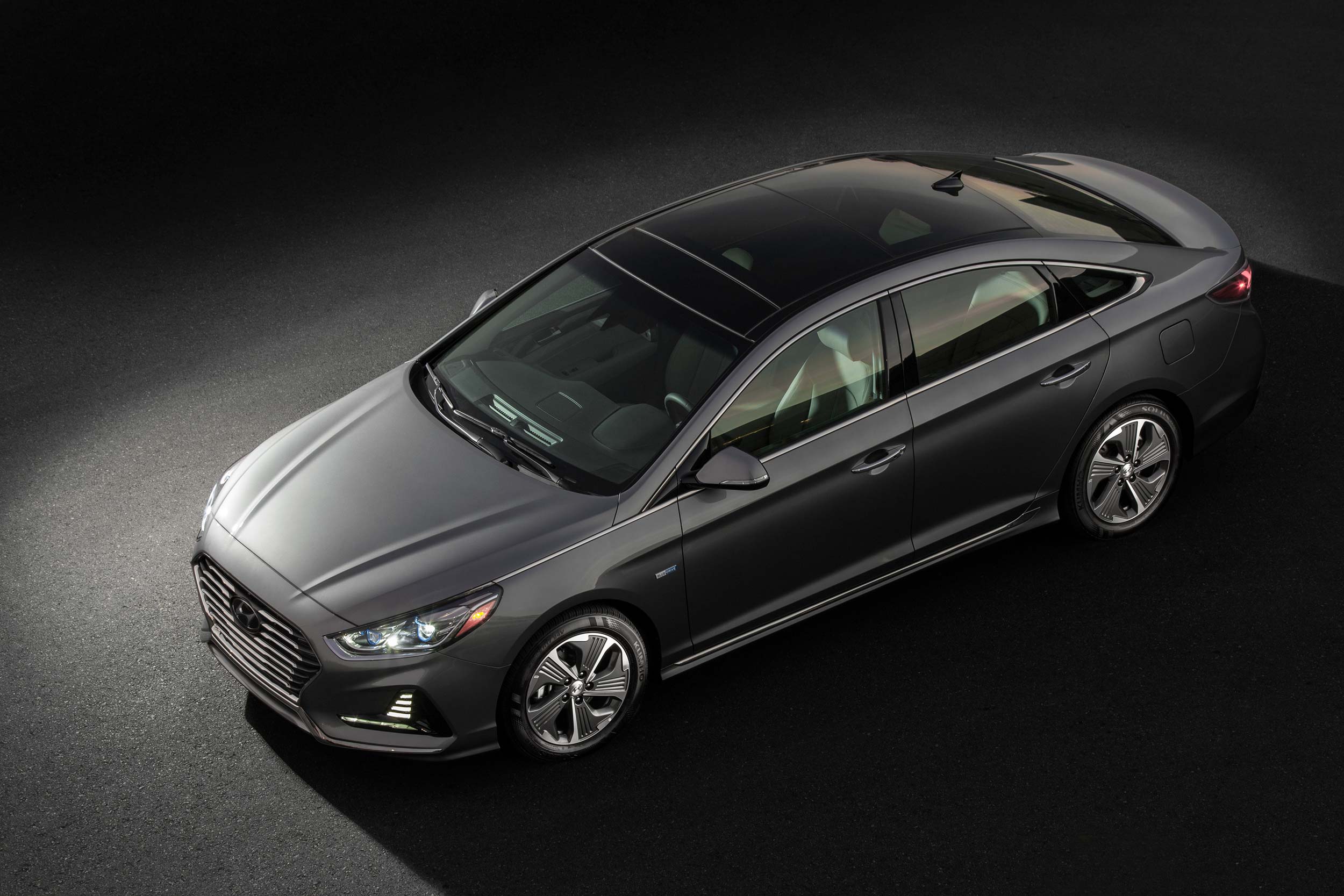 The popular Hyundai Sonata starts at the value-priced SE level. Shoppers can choose the base 2.4-liter conventional four-cylinder with 185 horsepower or the 193-horsepower hybrid powertrain for $3,450 more.

Buyers will need to hang on to their Sonata Hybrids an additional 16 months and 26 days to beat the initial price difference, though. 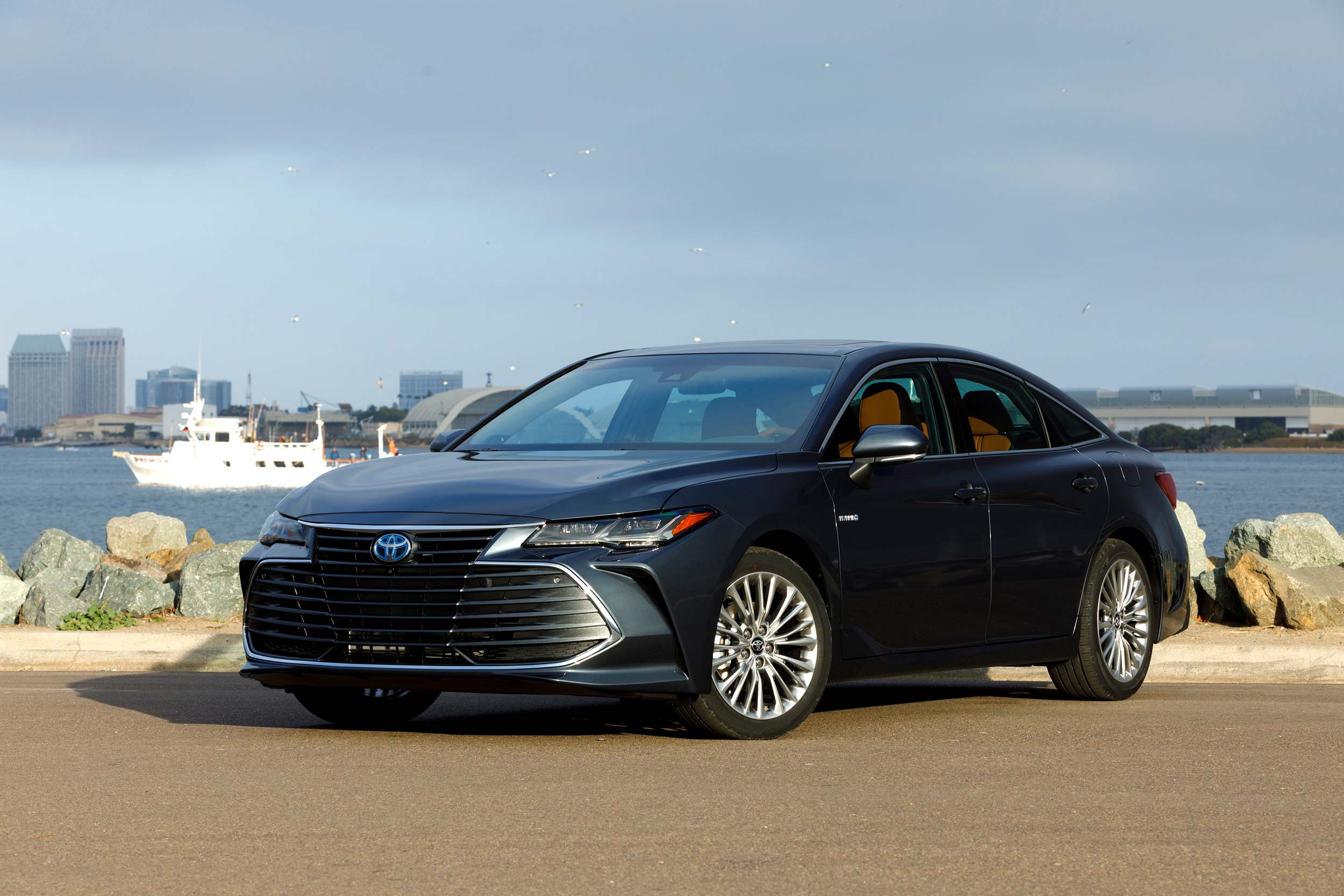 The conventional Toyota Avalon XLE features a muscular 268-horsepower V6 that still returns 26 mpg in the combined cycle. Drivers will spend $1,506 every year feeding the powerplant, however, and pour out 5.6 tons of CO2.

For an additional $1,000, the Avalon XLE can be had with a hybrid powertrain. Total system horsepower drops to 200, but combined economy jumps up to 44. CO2 emissions plummet to 3.3 tons per year, a savings of 11.5 tons over the first five years alone.

Even better, fuel costs are only $890 per year, meaning that the $1,000 price difference will be erased in just one year, seven months, and 15 days. 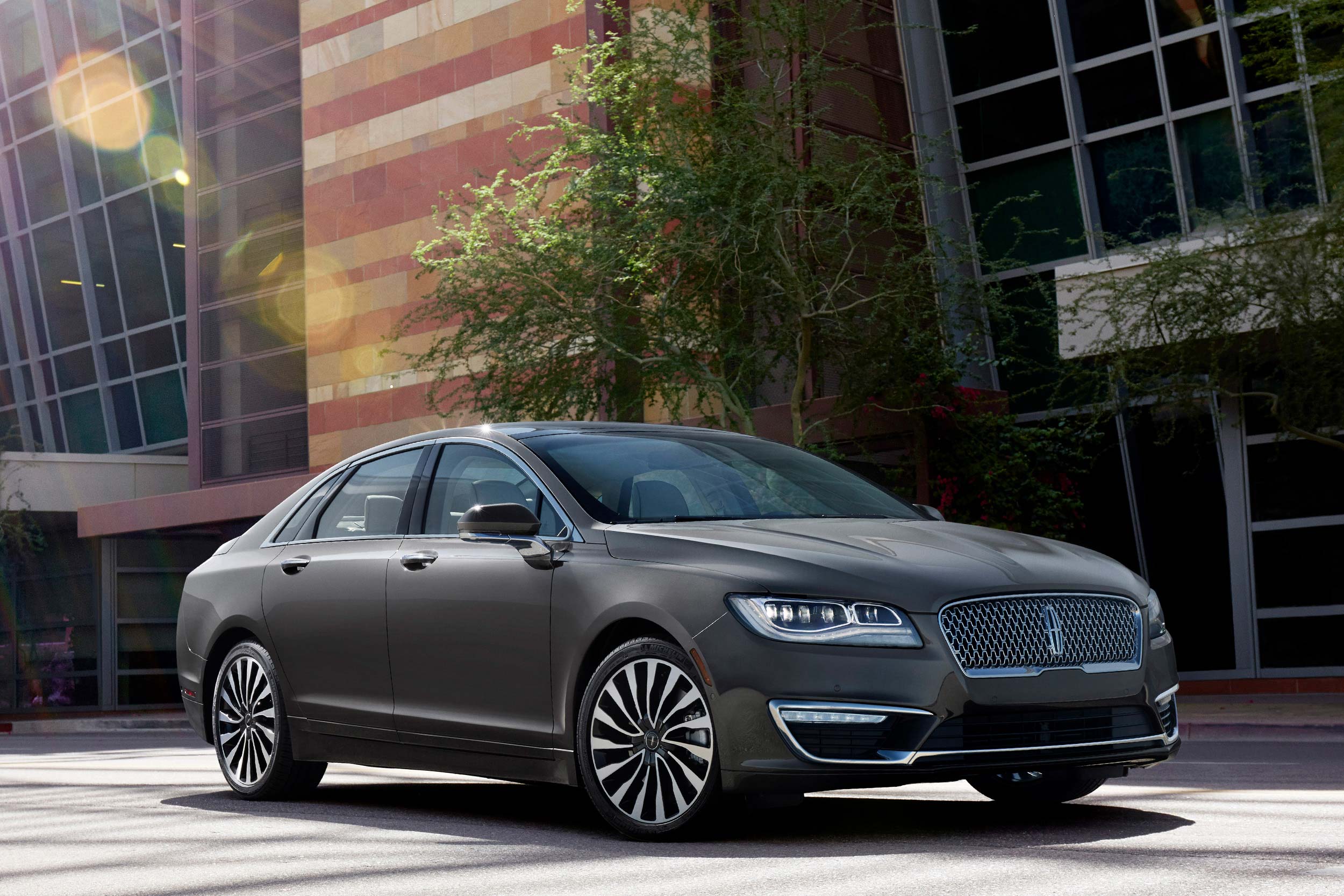 Lincoln offers its MKZ Standard at same price for both conventional and hybrid forms.

The 2.0-liter turbo under the hood of the standard Standard makes 245 horsepower, returns 24 mpg in the combined cycle, and emits 6.2 tons of CO2 from the tailpipe each year.

The Hybrid total system output decreases to 188, but economy springs up to 41 mpg, and emissions drop tp 3.6 tons.

After five years, Hybrid drivers save a whopping $3,380 of fuel and an incredible 13 tons of CO2 emissions. 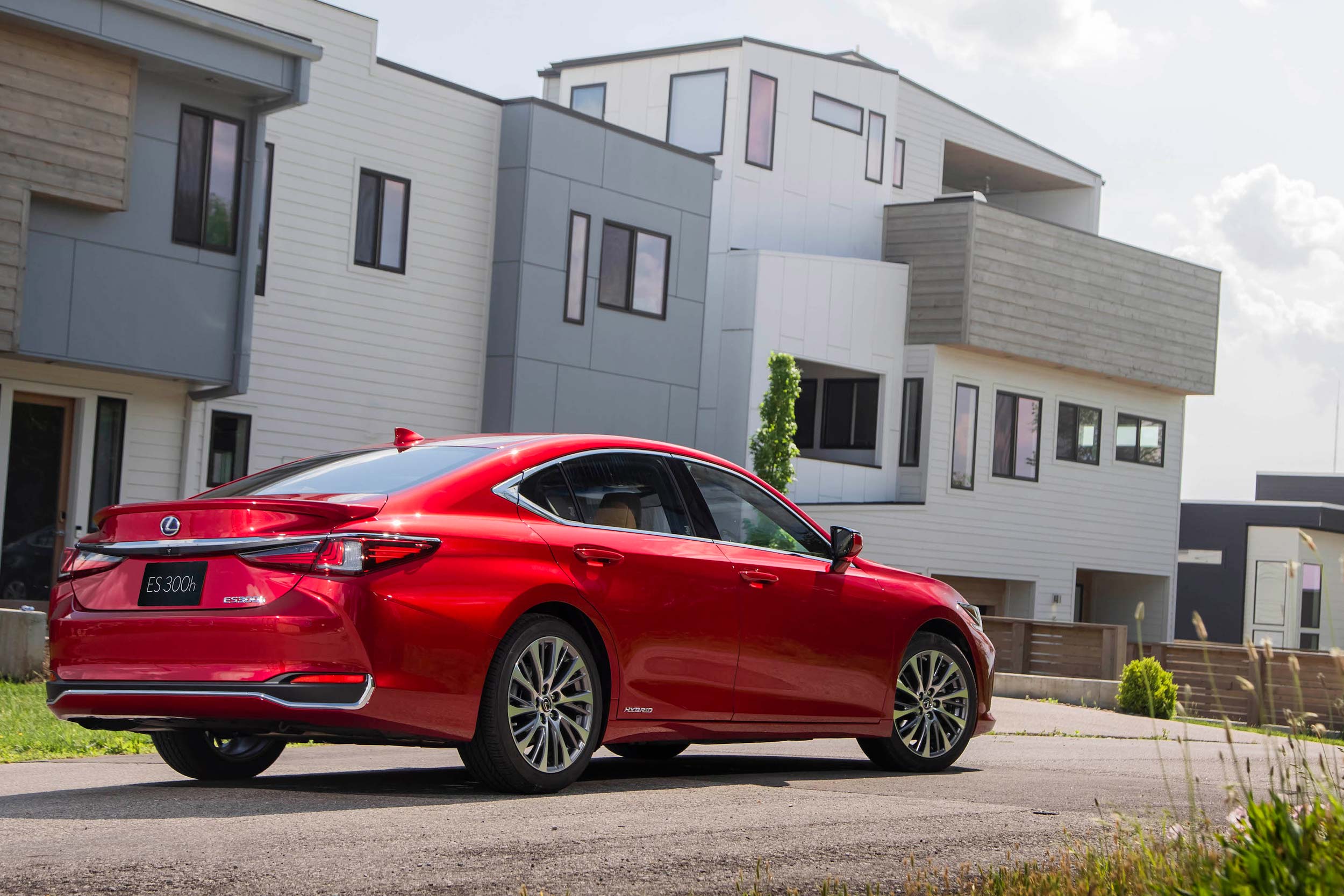 Toyota brags that the latest hybrid Lexus ES 300h is most fuel-efficient luxury vehicle without a plug, and at 44 mpg combined, it’s hard to argue. The 215-horsepower sedan cost just $890 per year to fuel, and emits 3.3 tons of CO2.

The conventional 350 retails for $1,810 less than the hybrid, and horsepower skyrockets to a hairy-chested 302 thanks to a 3.5-liter V6. Unsurprisingly, fuel economy sinks to 26 mpg and carbon balloons to 5.7 tons per year. The bigger engine requires $1,506 of fuel every year.

Though quite similar, the vehicles are clearly aimed at two different buyers. Hybrid buyers will begin saving money over V6 buyers after three years, 11 months, and eight days. 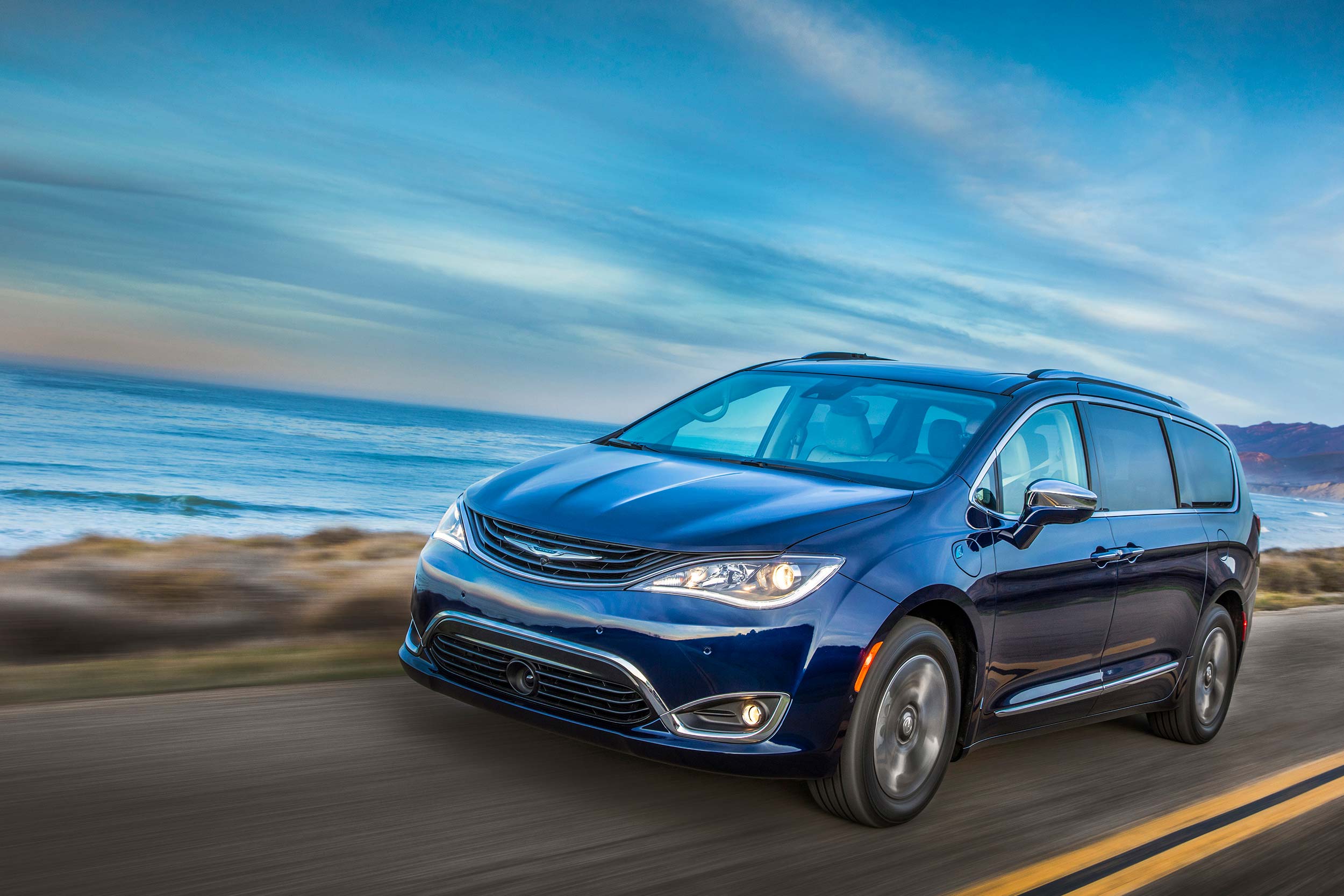 While clearly not a car, we were very interested to see how America’s only hybrid minivan stacks up to its conventional counterpart.

The Pacifica is a plug-in hybrid and has an electric-only range of 32 miles, giving it a MPGe rating of 82. Once it switches to straight hybrid mode, fuel economy in the combined cycle is 30 mpg.

If drivers use all 32 miles of electricity a day, the Pacifica Hybrid will require, yearly, around $998 to motivate (electricity prices vary wildly; calculations were made with a regional West Coast rate of 10.8 cents per kWh). Carbon emissions are an EPA-estimated 2.0 tons per year, but that number counts electric-only driving as zero emissions driving. Power generation has emissions of its own, and those also vary widely by region.

Even if the Pacific Hybrid is never plugged in, it will still only cost $1,305 per year to fuel. At the same rate of CO2 emissions per unit of fuel burned as its non-hybrid counterpart, the Pacific Hybrid would only emit 4.8 tons per year.

The conventional Pacific is much easier to quantify. At 22 mpg, it will eat $1,779 annually and emit 6.6 tons of CO2 from the tailpipe.

In the best case scenario, the Pacifica Hybrid would need just over eight years to have a purely financial advantage.