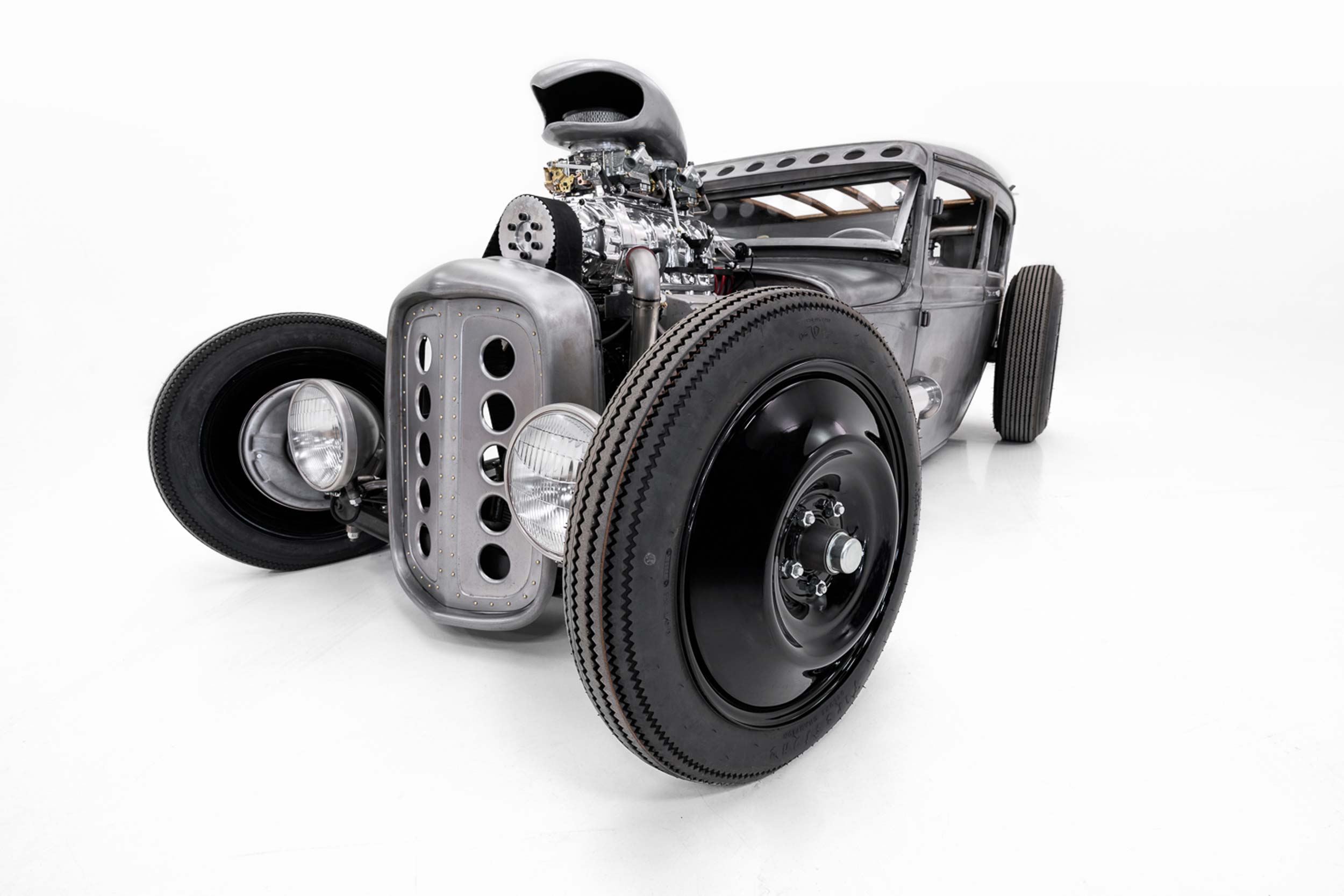 When Seether bassist Dale Stewart found a 1930 Ford Model A sitting in a barn in Wisconsin, he knew he had finally found his true purpose in life. “I want to be one of those cool old guys,” he said on a TV show about the build of his dream car. “I want to go out in a fireball of gasoline and smoke.”

He took the sedan to Classic Car Studio in St. Louis, the shop featured on Velocity Channel’s show “Speed is the New Black.” Outside of the Nielsens, owner Noah Alexander and crew have built some serious street cred: their work has appeared on the covers of Hot Rod, Classic Trucks, and Super Chevy, as well as being featured at SEMA and on Jay Leno’s Garage. 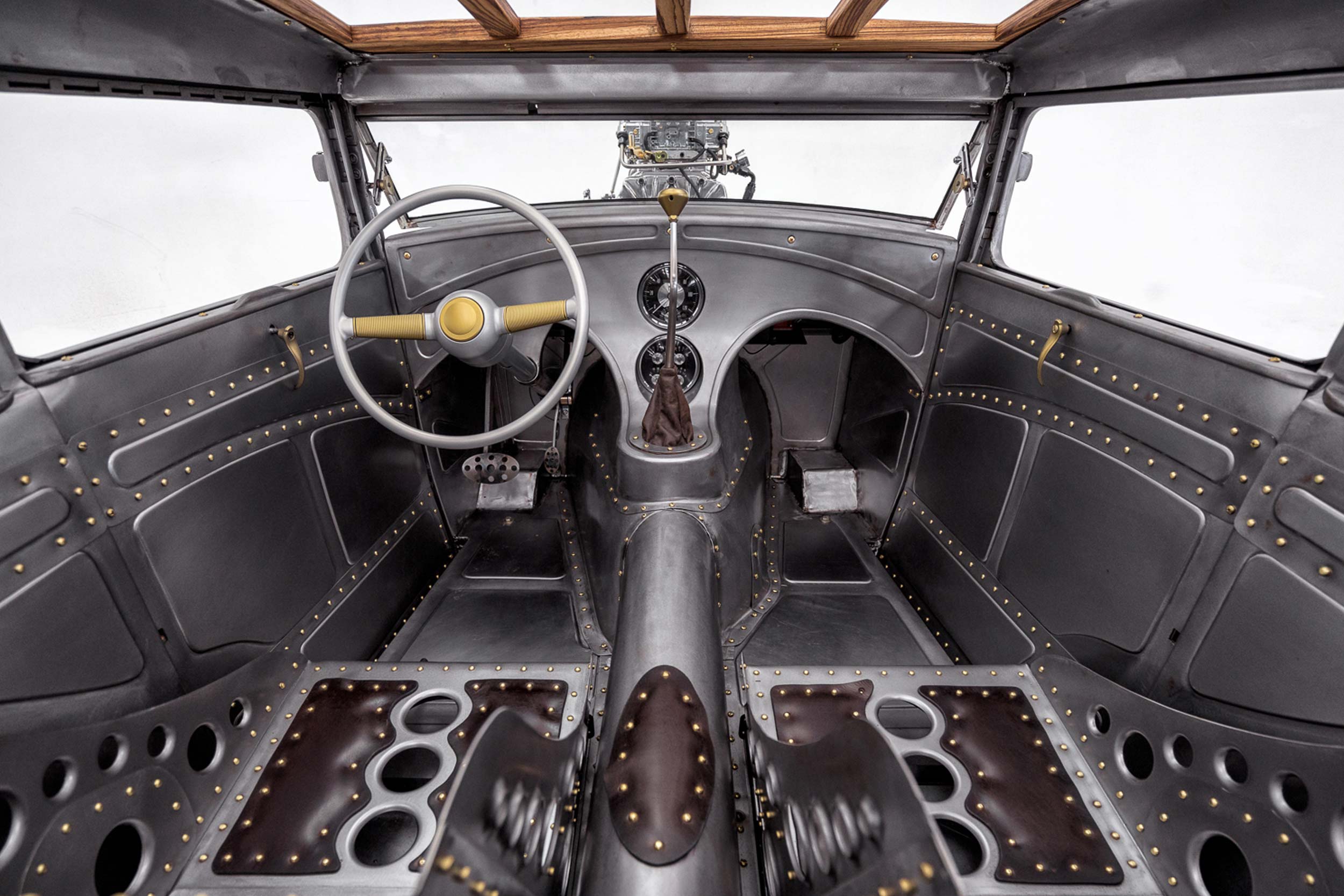 The crew started with a custom-built chassis, then channelled the Ford two inches before dropping it on. The top was chopped five inches, and every panel of the interior was hand-formed. Classic used a distressed finish and brass aircraft rivets for an old-school look, with brass accenting the steering wheel and door handles. The roof stringers were made of zebra wood and left uncovered. 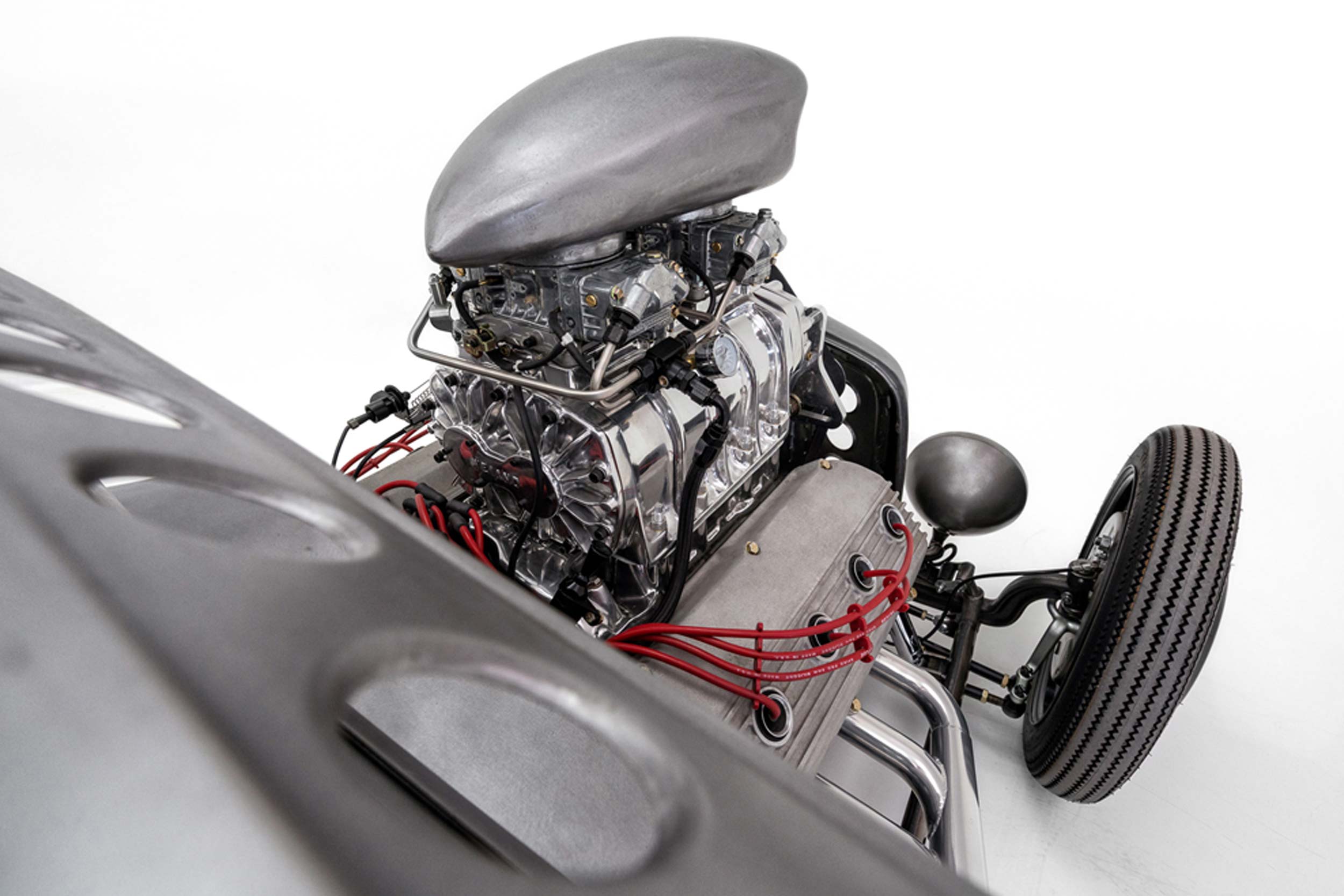 In keeping with the blending of old and new, a classic 331 cubic-inch Hemi V8 was chosen for power. The 331 was the first Hemi,  introduced for the 1951 model year. It was designed to last 100,000 miles—incredible for the day—and was the first sighting of the Hemi characteristic “plug wires through the valve covers” look, a choice made to allow spark plug changes without the need for removal of the valve cover.

The 331 debuted with 180 horsepower, but this particular mill cranks out 500 thanks to nearly 70 years of performance advancements. Oh, and a Weiand 6-71 supercharger. Putting all that to the road is a torque-friendly TCI Super StreetFighter transmission with a 3,000 rpm stall. Out back is a John’s Industries 9-inch rear with 4.10 gears, a 1360 yoke, and 31-spline axles.

More than just chopped and channeled, the Ford is lowered further with a five-inch drop axle up front, with split wishbones and Lincoln brakes. Rear suspension is provided by a four-link setup with adjustable coilovers. 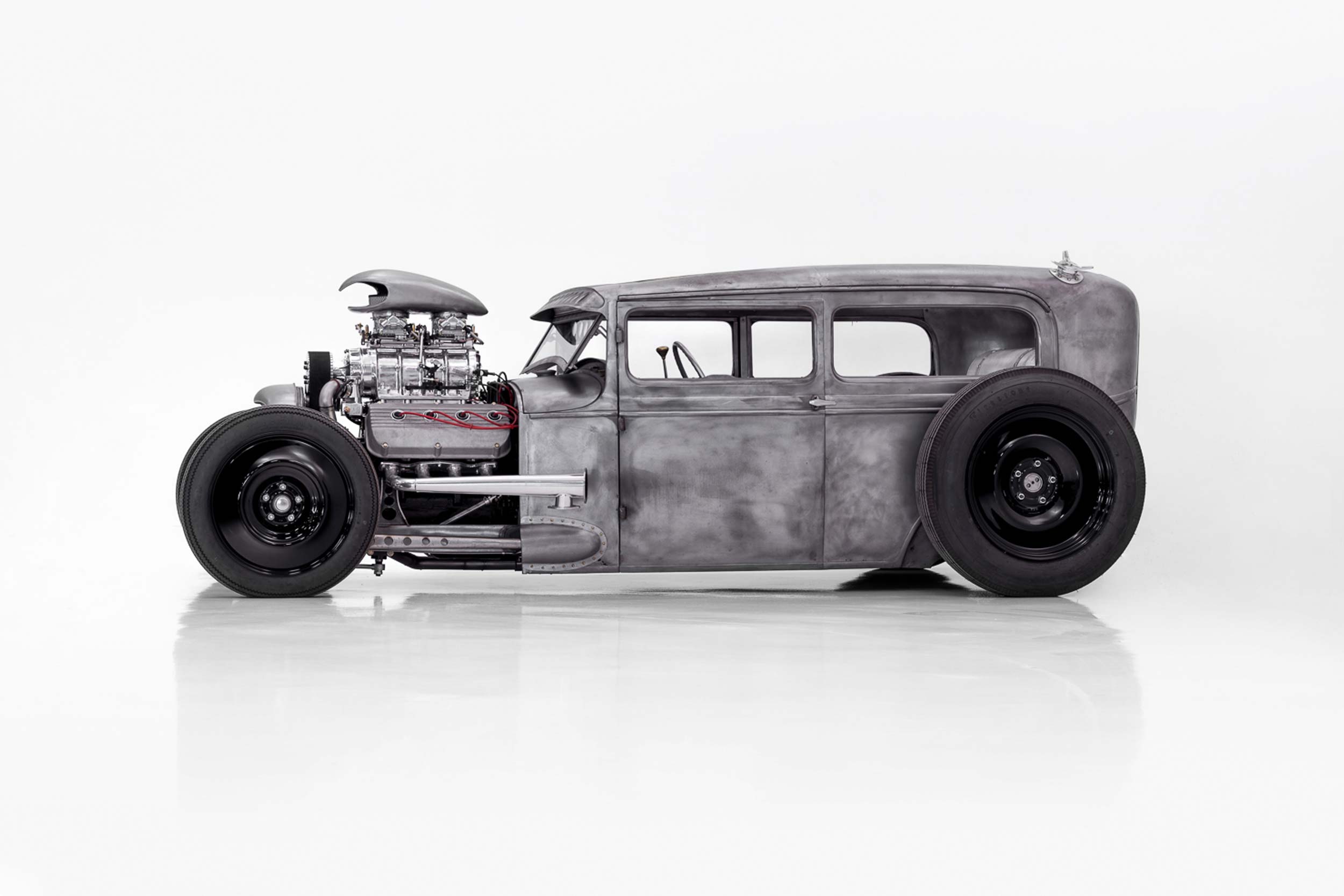 Adding to the allure of the auction is the inclusion of a bass signed by Stewart and played at shows all over the world. Heavy metal band Seether first came to prominence in the early 2000s with Billboard hits “Fine Again” and “Broken.” Their success continued with “Fake it,” “Country Song,” “Words as Weapons,” and others. 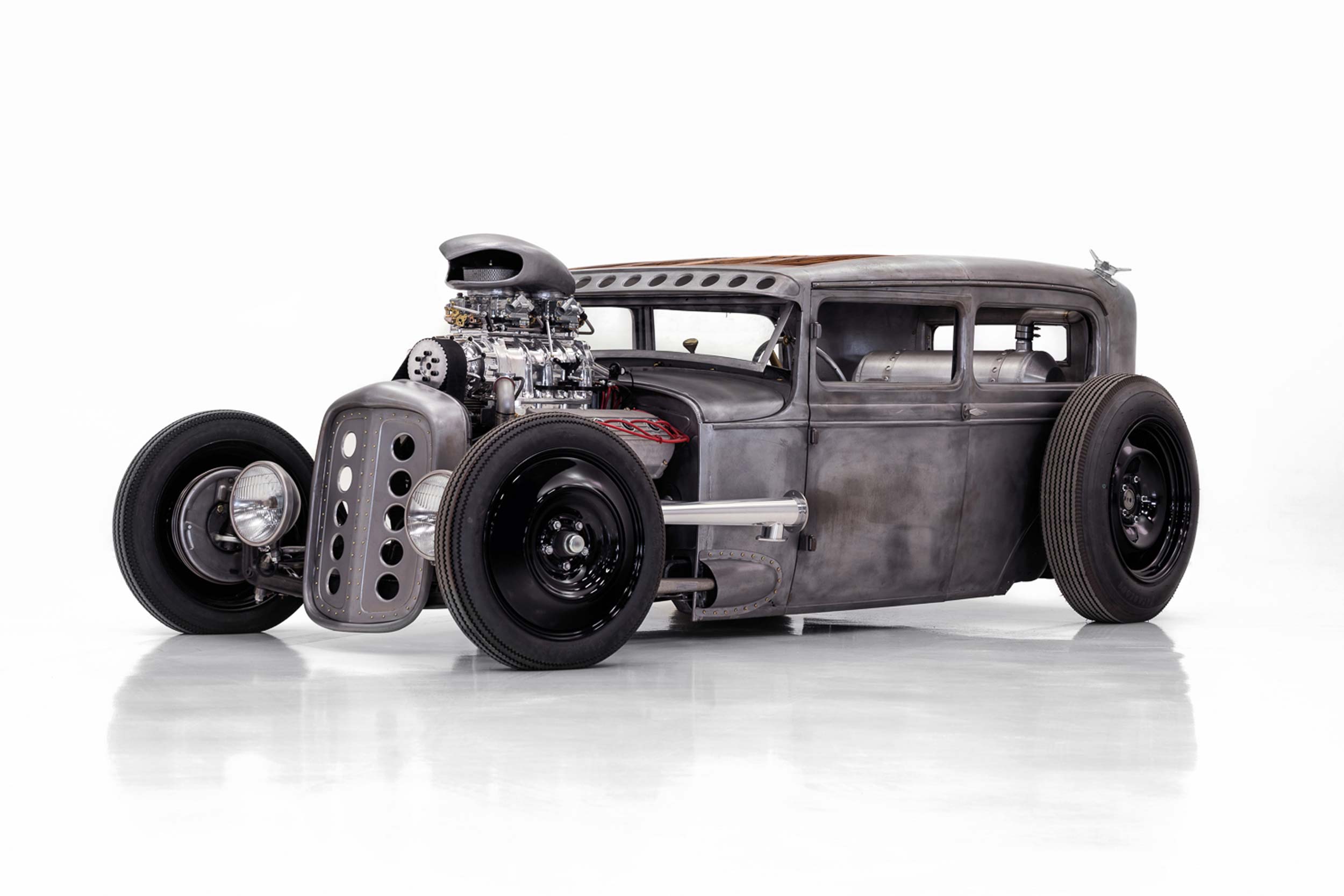 The custom Model A is being put up by Classic Car Studio on behalf of Stewart. It’s listed as Lot #1059.1 and will be on display at the Barrett-Jackson tent before crossing the block between 4 and 5 p.m. on Friday, January 18.