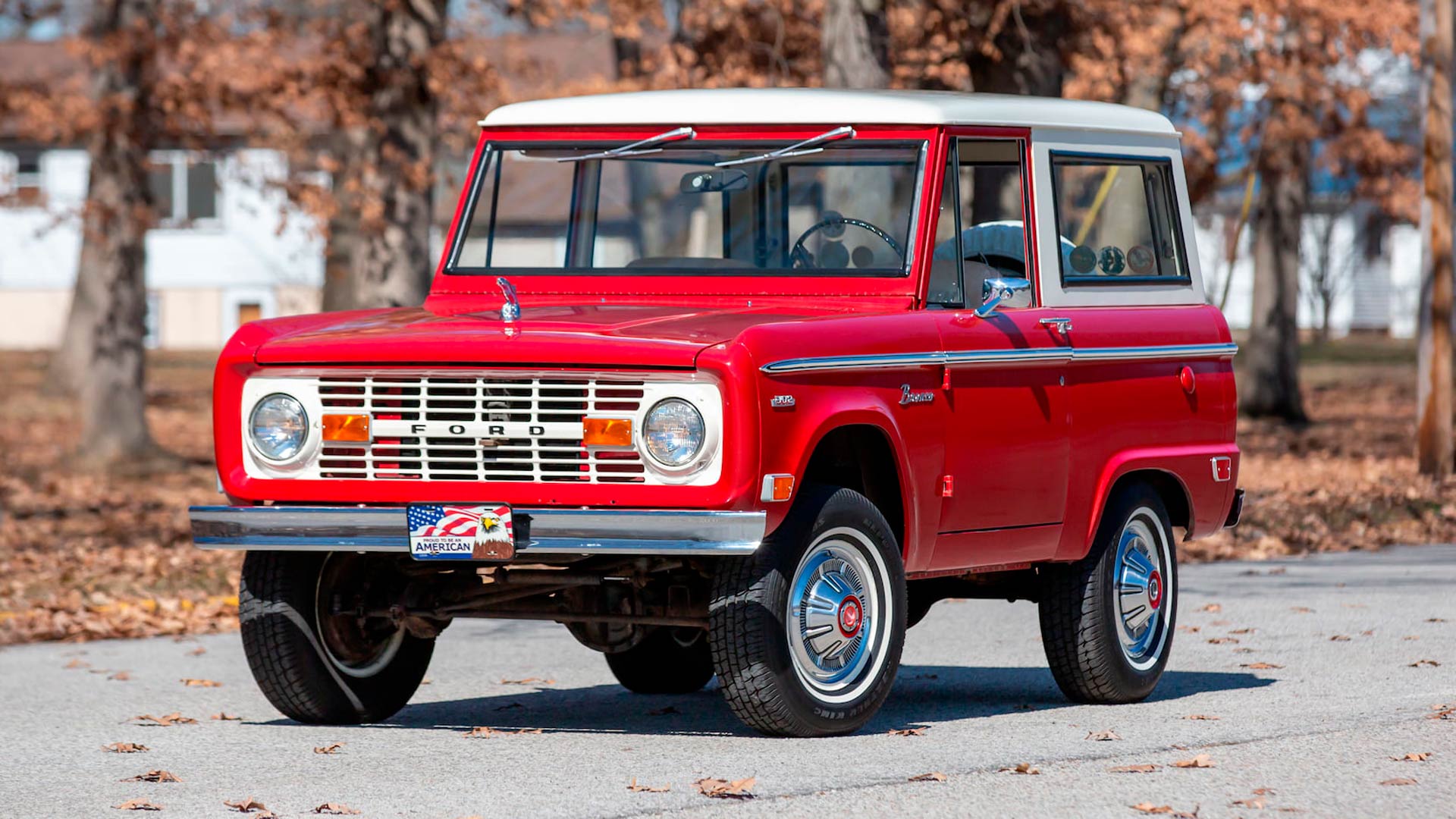 The big reveal of the all-new Ford Bronco is almost upon us, with the big reveal planned for Monday, July 13th.

However, if waiting to purchase a new sixth-generation Bronco is just too big a test of your patience, we have a solution.

The upcoming Mecum Auctions Indy 2020 sale has more than 2,500 vehicles ready to cross the block. Amongst them are nearly twenty different Broncos, ranging in age and style.

Buying one of these five could be a much quicker route to Bronco ownership. 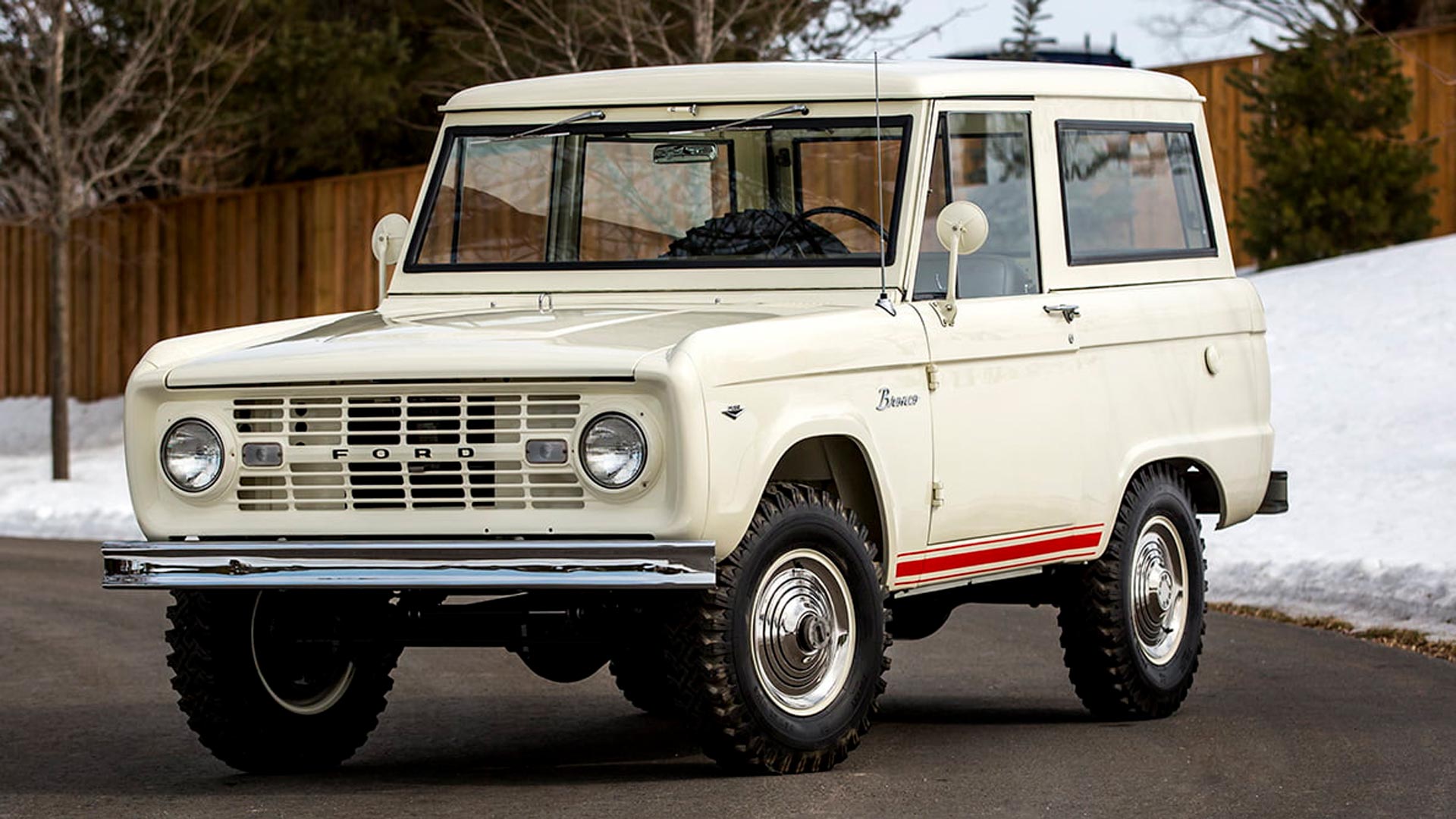 Fully restored, this Wimbledon White model goes all the way back to the start of first-generation Bronco production. Built to compete with compact SUVs like the Jeep CJ-5, Ford found itself with a sales hit. Almost 24,000 examples were made in the first year of production.

This example is powered by a 289-cubic inch V-8. Introduced as a cost option in 1966, this is a relatively rare engine as most early Broncos were six-cylinder models. A three-speed manual transmission sends power to all four wheels.

A thorough restoration was undertaken by Bronco expert Tim Winch, with the truck covering just 110 miles since. Front locking hubs, an AM radio, and a desirable rear bench seat are just some of the features on this immaculate example. 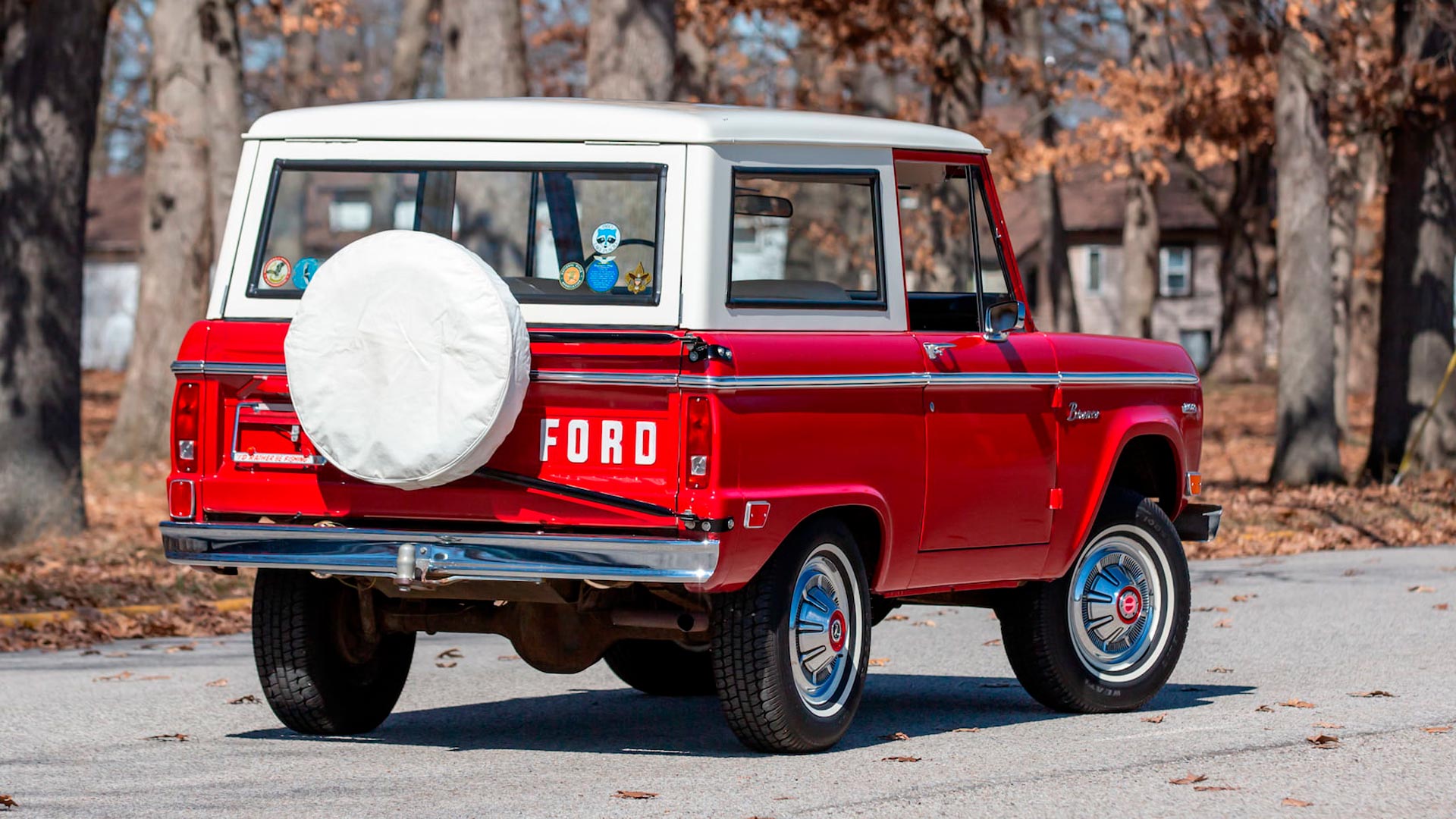 One of the reasons the 289-ci V-8 is so rare is due it being replaced with the more powerful 302-ci V-8 engine for the 1969 model year. This example is one of the first Broncos to have been fitted with that bigger engine, and it comes in original unrestored condition.

Owned by the first purchaser until 1991, this Bronco has only had one other custodian. Since leaving the Ford plant, total mileage stands at an astonishingly low 30,400 miles. It still wears the factory-fitted tow hitch, and the jack for the spare wheel is in the original bag.

Maintenance has been performed as need, but changes have been limited to as close to stock as possible. This is with the exception of a removable spare wheel swingarm, roof rack, and a chrome trout hood ornament.

Lot T186 represents the chance to own an unrestored, low-mileage, Bronco that has been lovingly cared for by just two owners. 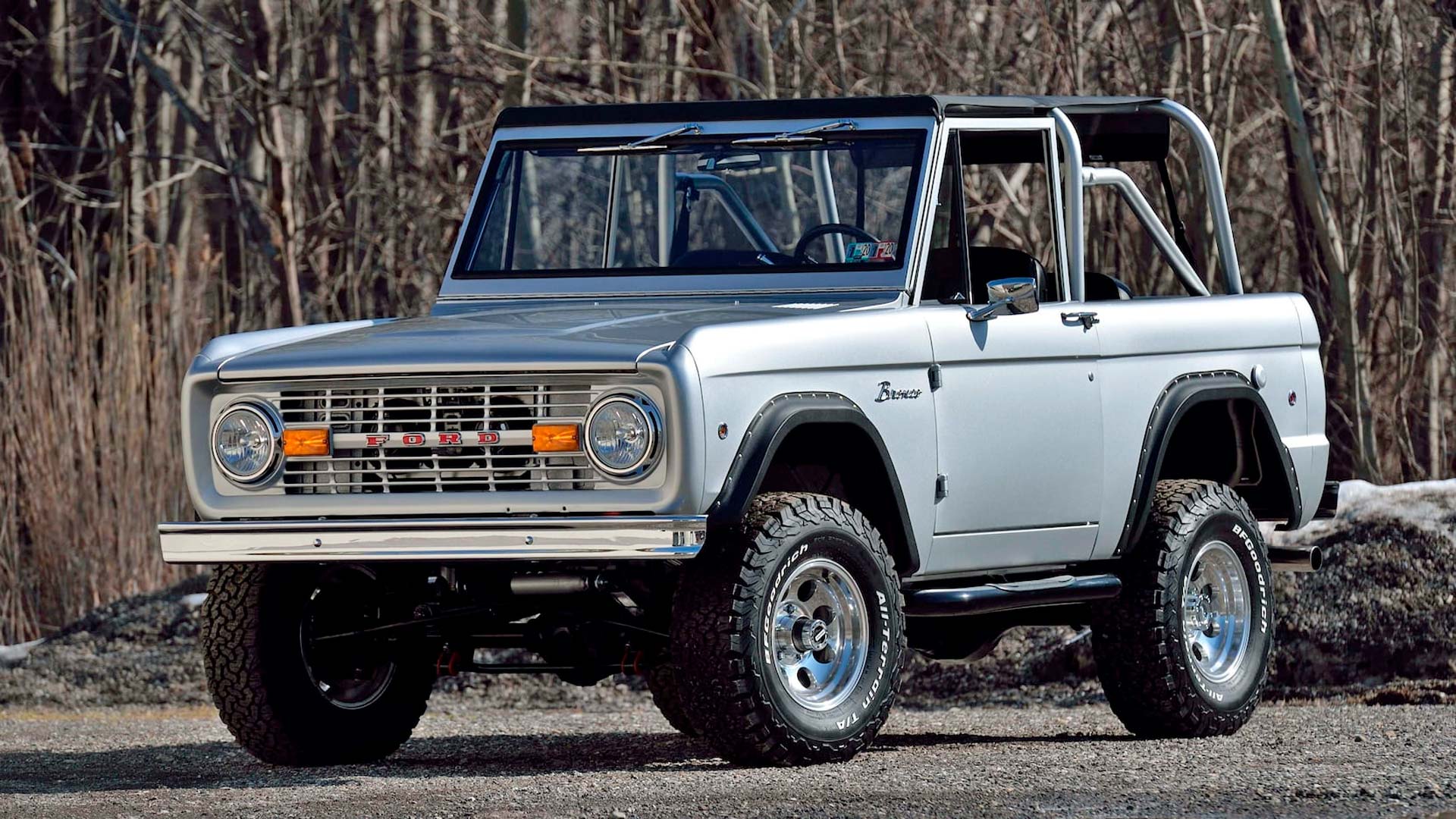 This next Bronco is anything but unrestored. More than $120,000 was spent on a build that lasted two years, and took 1,400 hours to complete. Work finished in fall 2019, with the completed product a truck that has seen no detail left unattended.

A fuel-injected 302-ci V-8 breathes through Hedman headers and a custom stainless steel exhaust. The C-4 automatic transmission has been rebuilt, whilst the suspension has been lifted by 2.5-inches. Disc brakes appear at every corner, hiding behind Pro Comp wheels with BF Goodrich All Terrain T/A rubber.

The bodywork has been resprayed in Ford Ingot Silver, with the interior benefiting from new white-faced gauges and Vintage Air cooling. There is also a hidden Sony Bluetooth stereo installed, too.

It makes for a thoroughly updated classic Bronco, just waiting to hit the trail. 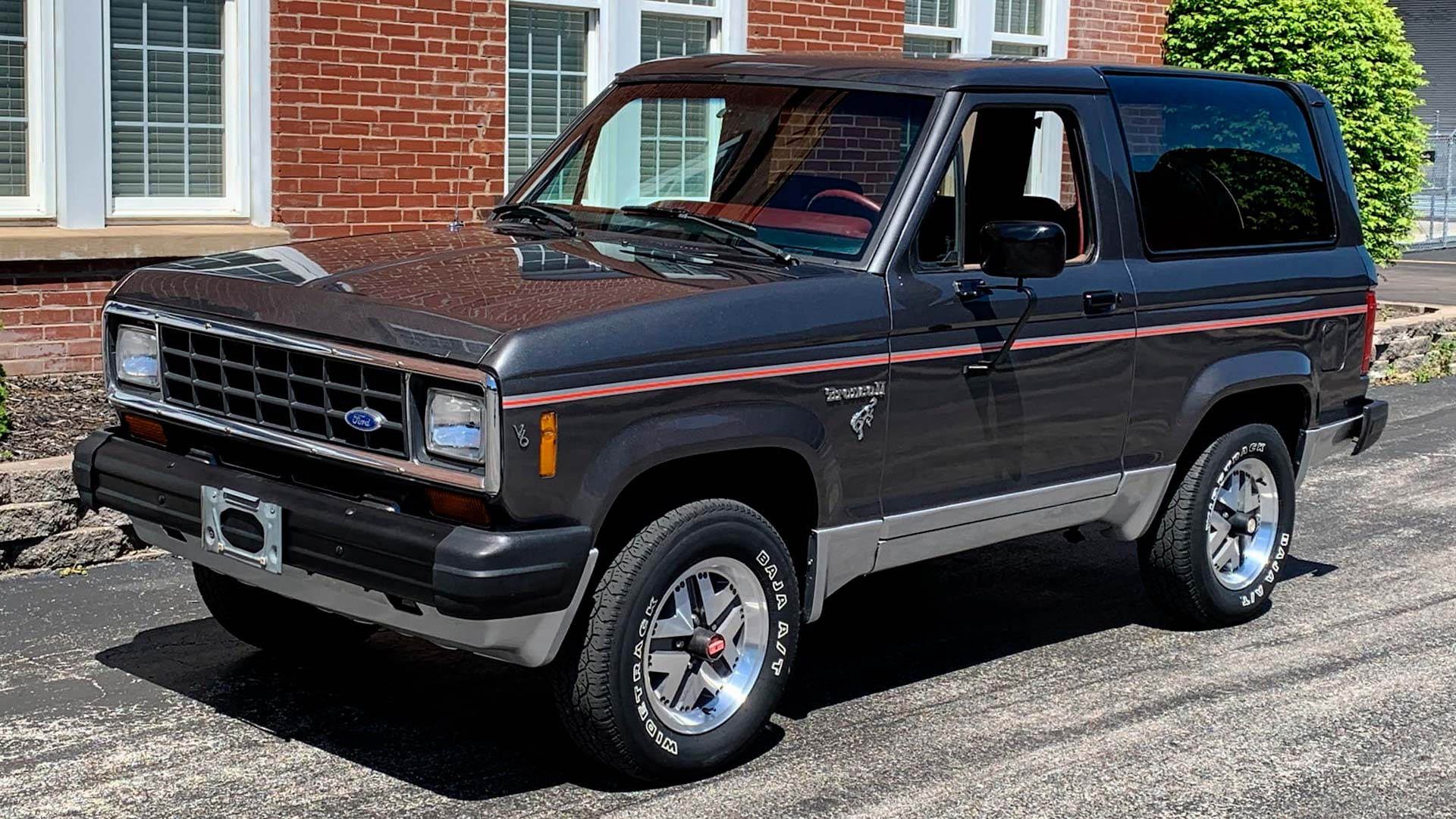 With interest in all things Bronco hitting new heights, the rare Ford Bronco II may be an affordable way into the nameplate. Based on the Ford Ranger pickup platform, the compact SUV model shared only a name with the regular full-size Bronco. In a neat twist of fate, the brand-new 2021 Bronco will also use a Ford Ranger platform.

Intended as a rival for the Jeep Cherokee and Chevrolet S-10 Blazer, this 1985 model comes from the second year of Bronco II production. Under the hood is a Ford of Europe-built 2.8-litre V-6 engine, offering 115 horsepower. It is connected to an automatic transmission, with standard four-wheel drive.

The Scarlet Red interior is a bold reminder of the 1980’s tastes, and comes with bucket seats, a center console, and air conditioning. As events dedicated to ‘80s and ‘90s style continue to grow in popularity, this Bronco II could open up entry to a new retro lifestyle. 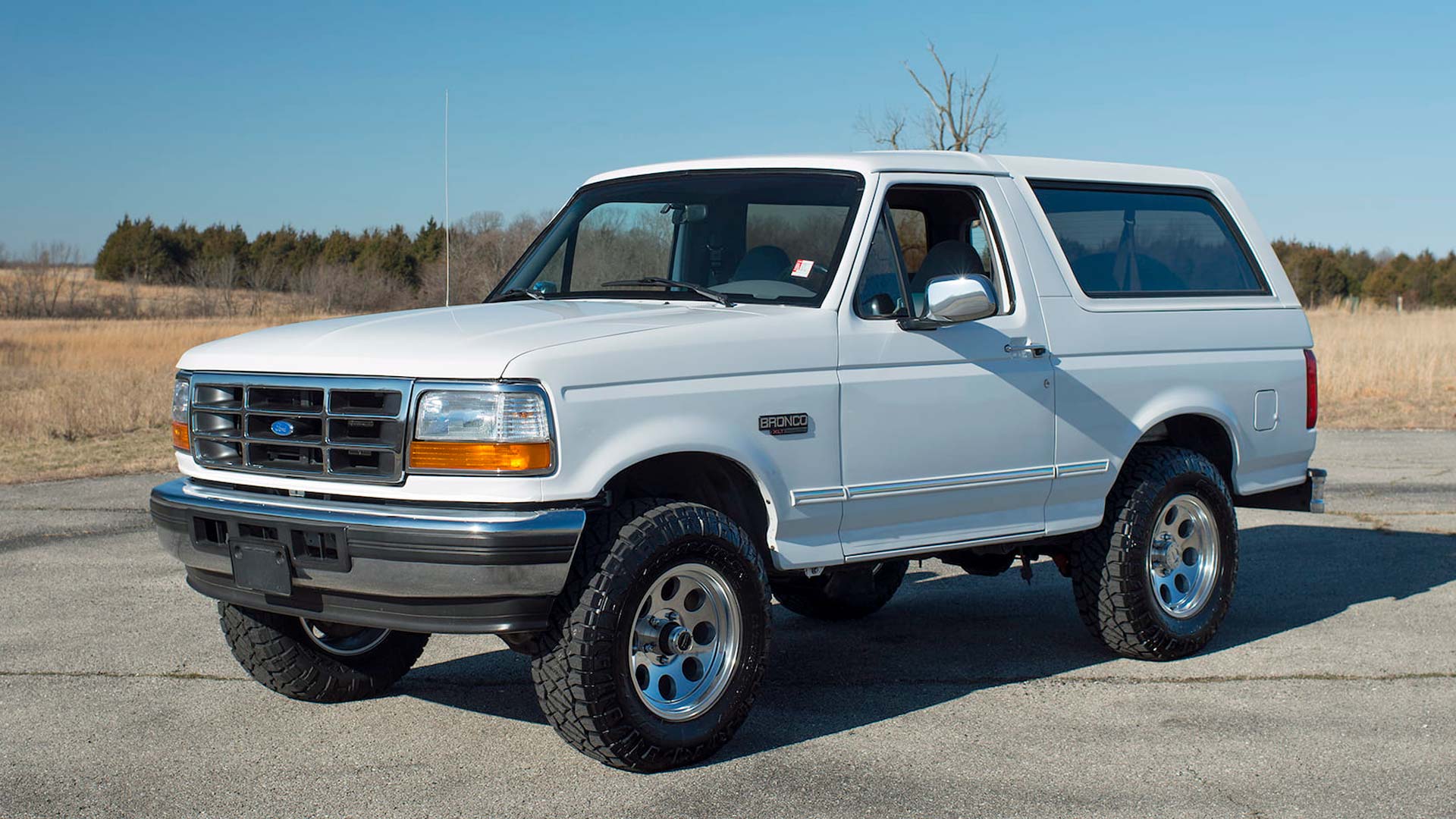 Until the 2021 version arrives, this is as new as it gets for Bronco ownership. The 1996 model year was the final call for the sixth-generation version, with some 34,000 examples sold.

A 205 horsepower 5.8-litre V-8 is under the hood, and this example comes with a four-speed overdrive automatic transmission. XLT trim means power door locks and windows, cloth captain’s chairs in the front with power lumbar adjustment, and a leather-wrapped steering wheel. This particular example also benefits from air conditioning and aftermarket wheels.

Noted as being free from rust, and still wearing its original paintwork, this is a well-preserved Bronco. Being sold as part of the David Jackson Collection, it is included alongside a diverse range of other American classics.

Sales at the Mecum Indy 2020 auction begin on Friday, July 10th, and continue through Saturday, July 18th. Along with bidding in person, online and telephone bids are also available.

Could this be the rarest 1970s Dodge Hemi Challenger ever made?