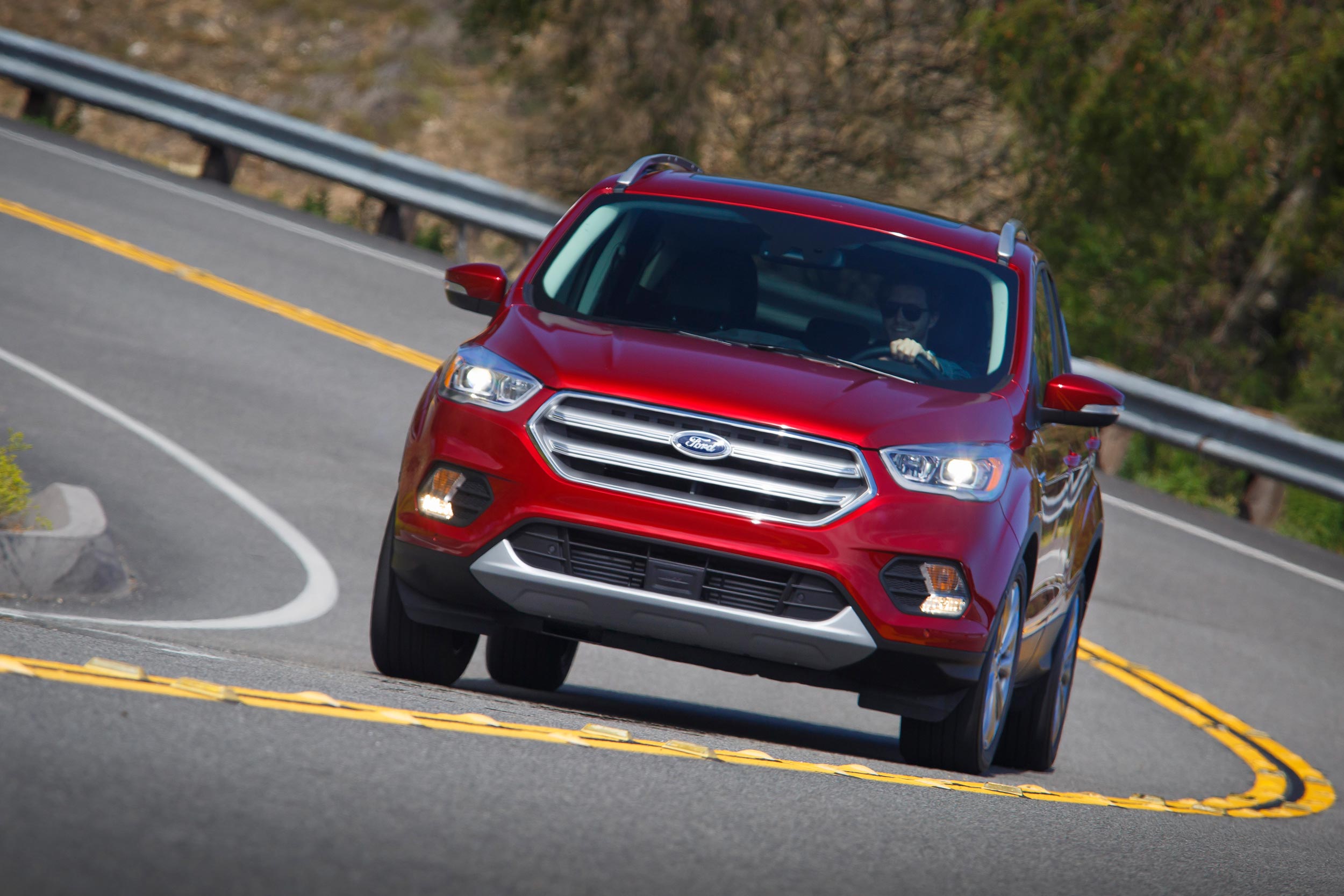 Our Titanium model is the highest trim level and loaded with everything, making it easy to love. The well-formed bones of the vehicle clearly show through the fancy dress, however. With or without the amenities, the cockpit is spacious, with plenty of light and air for everyone. Adult second row passengers have ample legroom, with cargo space for all. The drive is effortless without being boring, with a responsive and entertaining chassis.

The latest generation Escape has been going since 2013, and it’s expected that a new model will appear for 2020. 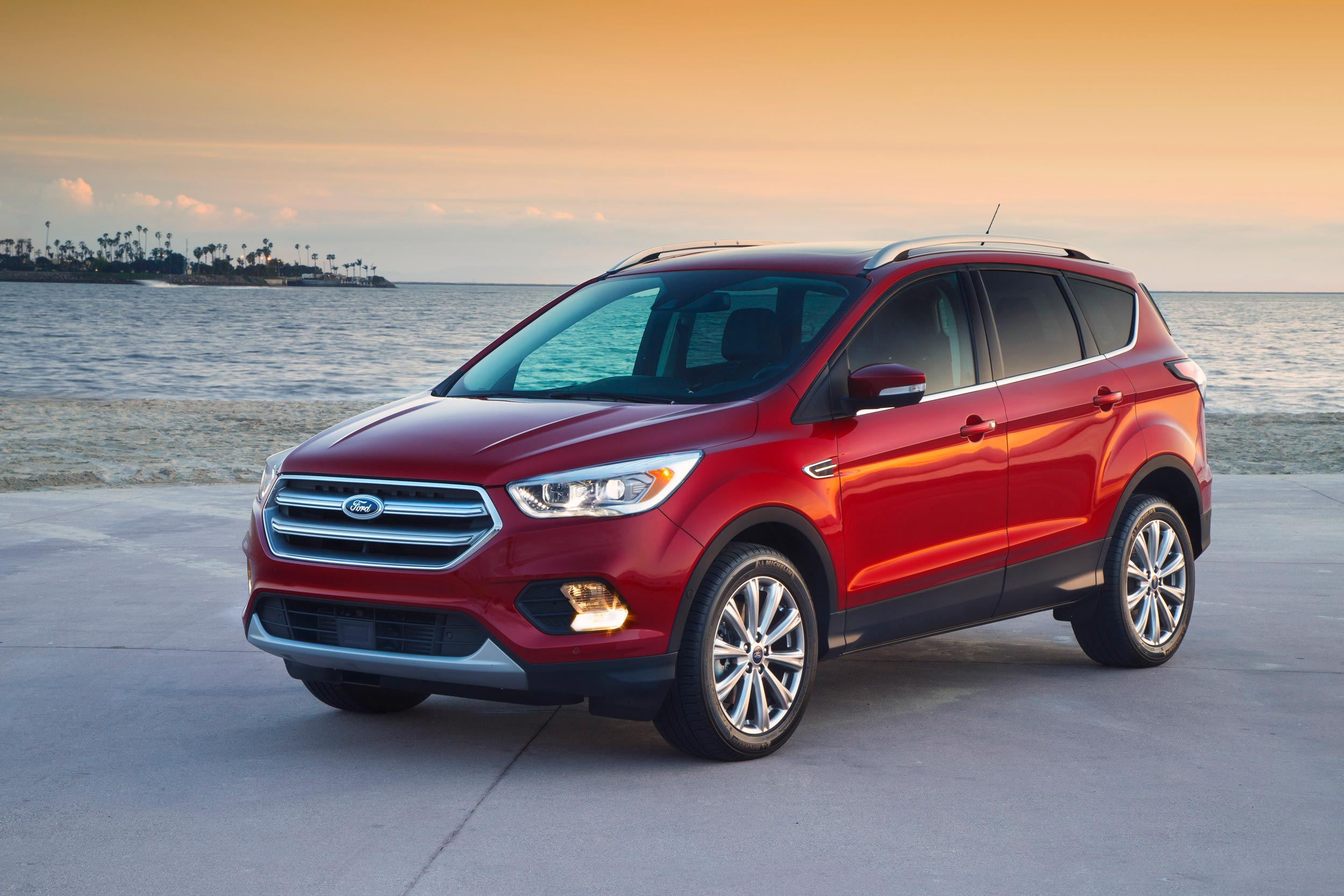 The Escape is a handsome entry in the compact SUV segment. We like the rakish stance and the way it’s emphasized by the black sills in all trim levels. The deep body stampings and pronounced character lines look modern and should keep the look fresh. The crisp LED lighting is an elegant touch.

Though it appears substantial, the Escape is, surprisingly, 10 inches shorter than a Mustang. Clever packaging allows seating for five adults and a weekend’s worth of gear in a small package. 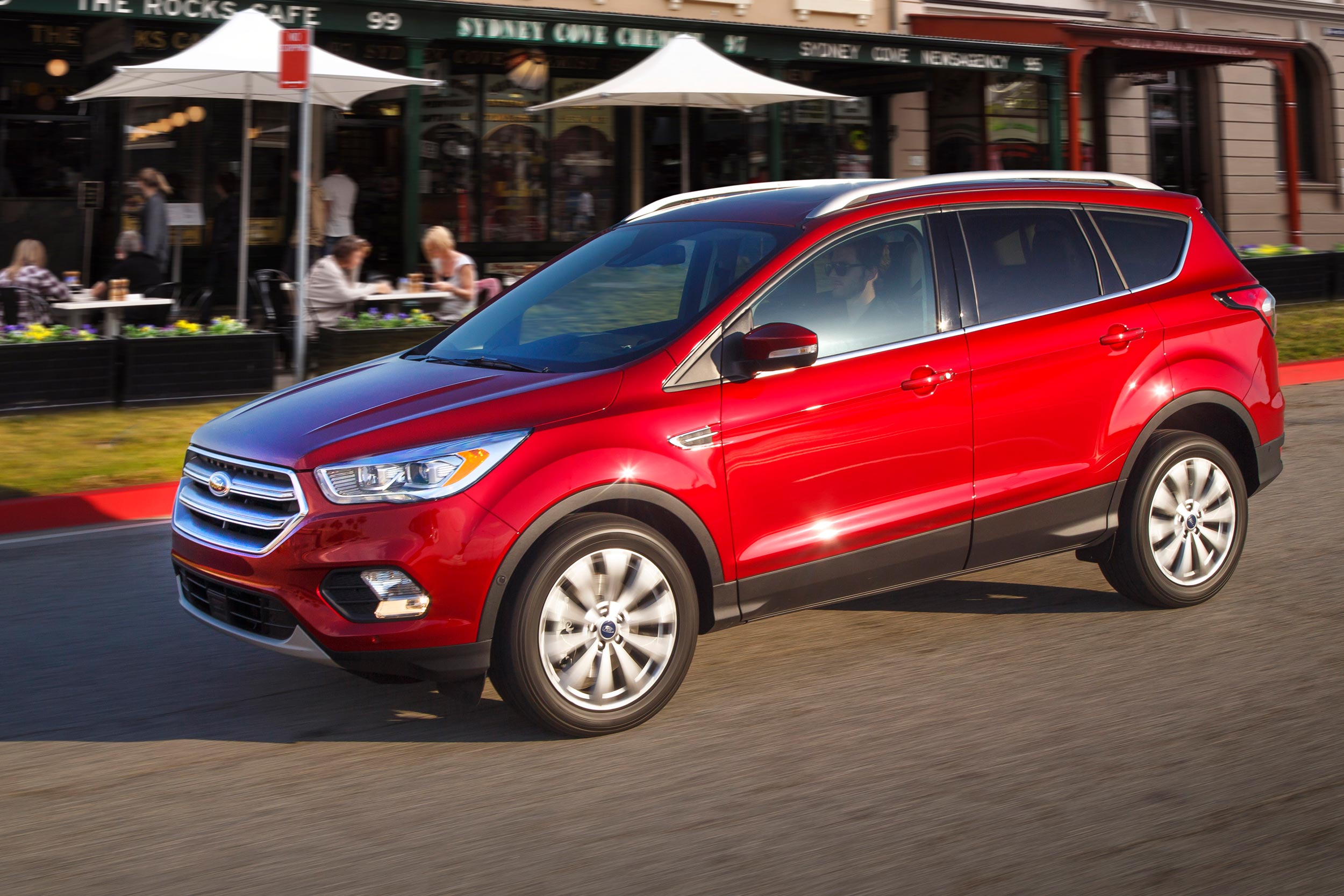 Busy city driving is only preferable to, say, being stabbed repeatedly with a fork. It’s a chore, a task, a thing that must be accomplished. The endless gridlock, cramped parking, and erratically aggressive drivers are exhausting.

Life in the Escape TItanium is a welcome respite from the hordes of reality swarming outside its windows. It’s quiet and supremely comfortable in the cabin, with a modern interior and well-placed controls. Everything is easily within reach and intuitive to use. Yes, there are buttons and knobs a-plenty, and also a digital command/infotainment module to interface with, but nothing requires a trip to the owner’s manual to decipher. 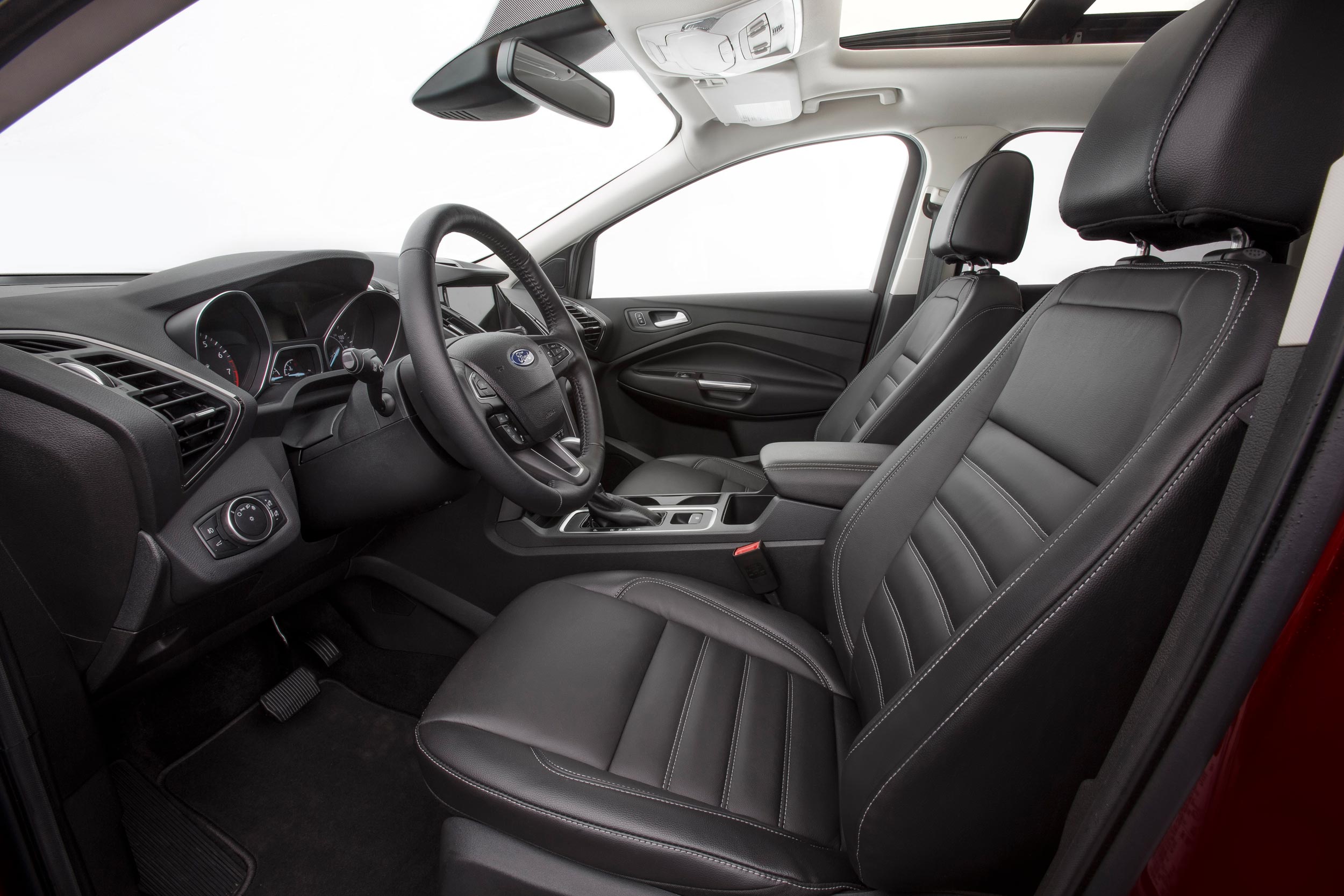 Touch surfaces in any vehicle instantly identify its status to the occupants. Too cheap and the car seems plasticky, but too nice and the car’s price quickly escalates. The Escape balances cost of materials and sticker price well. We realistically never had the desire to pet the dashboard, but the controls felt pleasing and ergonomically sound, clearly well considered and well executed.

The infotainment system in the Titanium is the top-of-the-line Sync 3 with 10-speaker Sony sound. We easily paired smartphones over Bluetooth and found the voice controls straightforward, with easy access to contact lists and audio libraries. The system can be a bit chatty at times, and we noticed that incorrect commands, such as non-existent navigation destinations or missing music, resulted in frustrating dead ends with no vocalized alternatives. That being said, we quickly came to rely on it.

Sync 3 is Apple and Android compatible and we found integration seamless. Interestingly, we preferred Ford’s straightforward navigation routes to Siri’s often completely daft ones, but liked interfacing with Siri more.

The Escape Titanium comes with automatic dual-zone climate control. As expected, operation is straightforward and clearly marked. Steamy August heat and humidity is an unfair test for air con, but the system kept us totally comfortable when trapped on midday gridlock. It could be a bit shouty at times, but again, August. 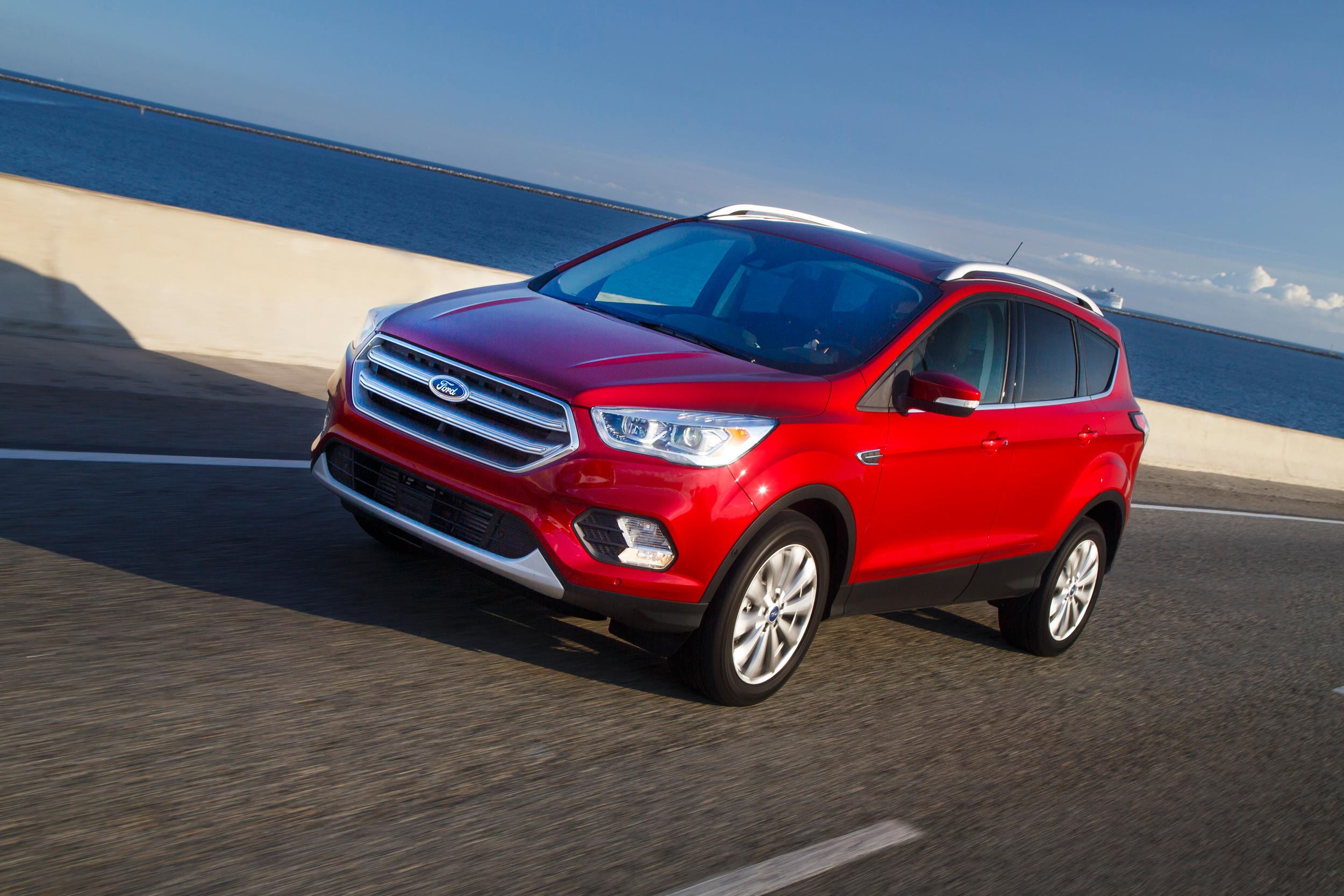 Once freed from rush hour, the Escape was a nimble companion in city traffic. The steering is light but direct, and never vague. The Escape goes exactly where you point it. The corners of the car are easy to feel, making parking a breeze, even in crowded garages with pillars and other barriers. Sensors front and rear clocked the distance to objects, and sounded alerts when things were getting close. The system is conservative but extremely helpful.

We loved the 2.0-liter turbo on stoplight dashes. The 275 lb-ft of torque makes short work of acceleration no matter how many people were in the car. The stop/start feature is smooth, and we were never quick enough to catch it unawares. The 2.0 is only available in the premium Titanium trim level, however.

The Titanium also come with Ford’s “Intelligent Access” keyless entry system as standard. In addition to double-clicking the fob, the doors will also unlock in the fob’s presence by placing a fingertip inside the door handle for a second, and lock with a fingertip on the outside of the handle. There is also a programmable touch-sensitive number pad that lights up in red on the outside of the B-pillar that allows coded access and disappears when not in use.

Our vehicle was equipped with the hands-free liftgate feature. Kick a foot under the rear bumper (in the presence of the fob) and the tailgate opens automatically, a boon on heavy shopping days. The gate shuts with another kick, at the touch of a button on the door, or by double-clicking the fob. The height that the liftgate opens can also be programmed, allowing shorter drivers to reach it when fully open; very thoughtful indeed. 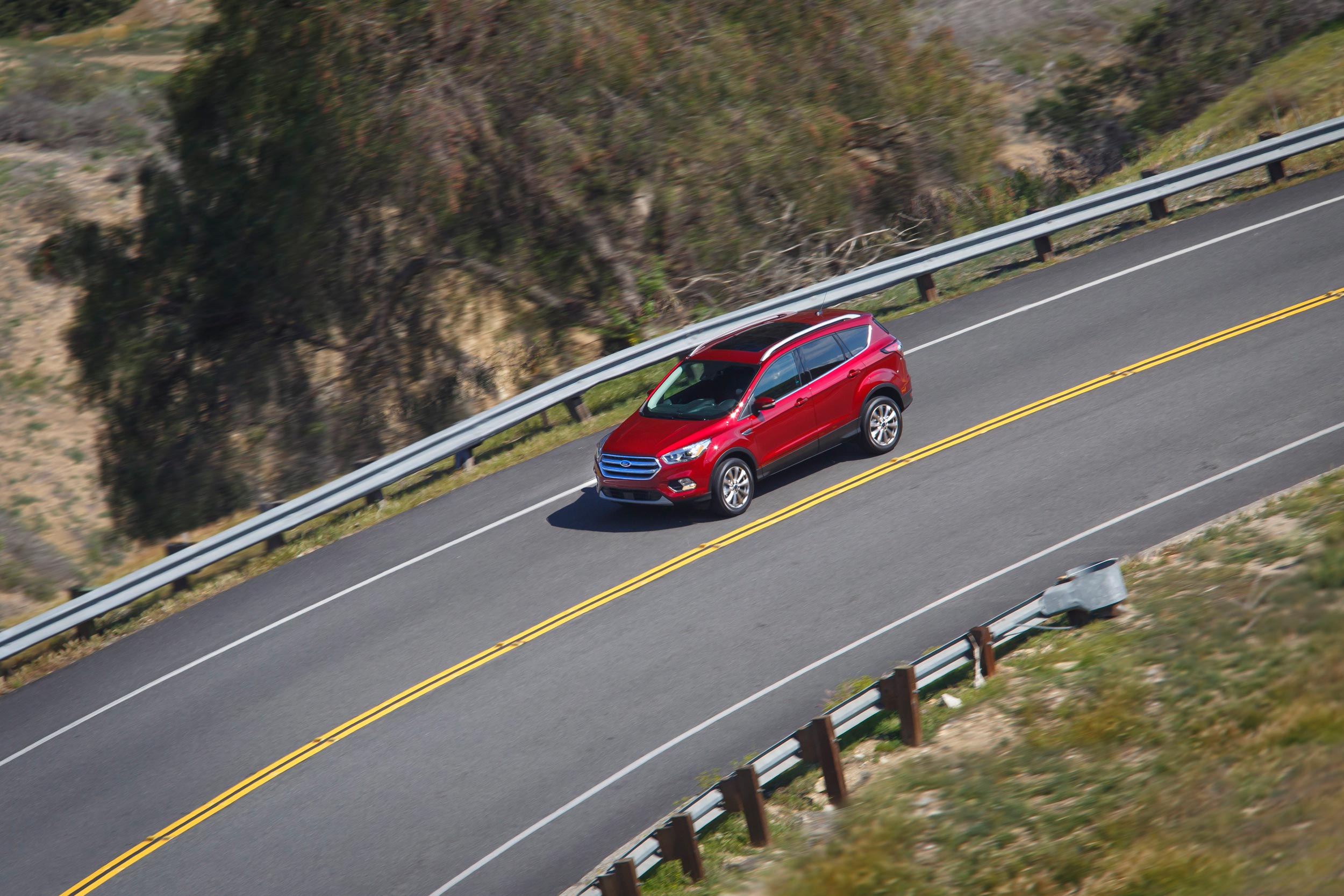 Out on the open road, the handsome compact SUV soaked up freeway miles with aplomb. The Titanium’s 245-horsepower engine never showed the slightest sign of fatigue, its long legs and relaxed demeanor clearly capable of marathons. Stick a toe in it, though, and our Escape smoothly shifted down a few gears and leapt at the chance to pass anyone and everyone.

The six-speed automatic gearbox seems connected to the throttle rather than the engine, and listens intently to driver input. Off the line, it keeps the power flowing as long as urgency is asked for, then quietly moves on to to a higher gear. At freeway speeds, revs are low and efficiency is maximized. Until, as mentioned, it’s time to get around that truck.

Paired to the drivetrain is Ford’s “Intelligent 4WD” system. As long as grip is available, the Escape thriftily prefers front-wheel drive. Sensors read the road and traction conditions every 16 milliseconds, though, and if slip is detected, the system will send up to 100 percent of torque to the rear wheels.

In practice, the Titanium stayed firmly attached to the pavement, even after we left the freeway and hit winding county blacktops. Spirited driving over hill and dale was downright composed, even with the occasional off-camber or descending radius turn.

On dirt roads, the song remained the same. Traction was excellent, especially noticeable in the bends. The Escape refused to do anything but go where it was pointed and could have been back in the city (minus the dust). Our model was shod with low profile ContiProContacts and we didn’t push it particularly hard, but there was enough character there to begin daydreaming of a high-performance Raptor version of the Escape with a turbo V6 and tall offroad tires. Yes, really.

The suspension and chassis work very well together. Cornering feels flat and body roll nonexistent. There is plenty of fun to be had, but not at the expense of ride quality. The shocks and springs absorb bumps and holes and other irregularities, but bound and rebound are tightly controlled. 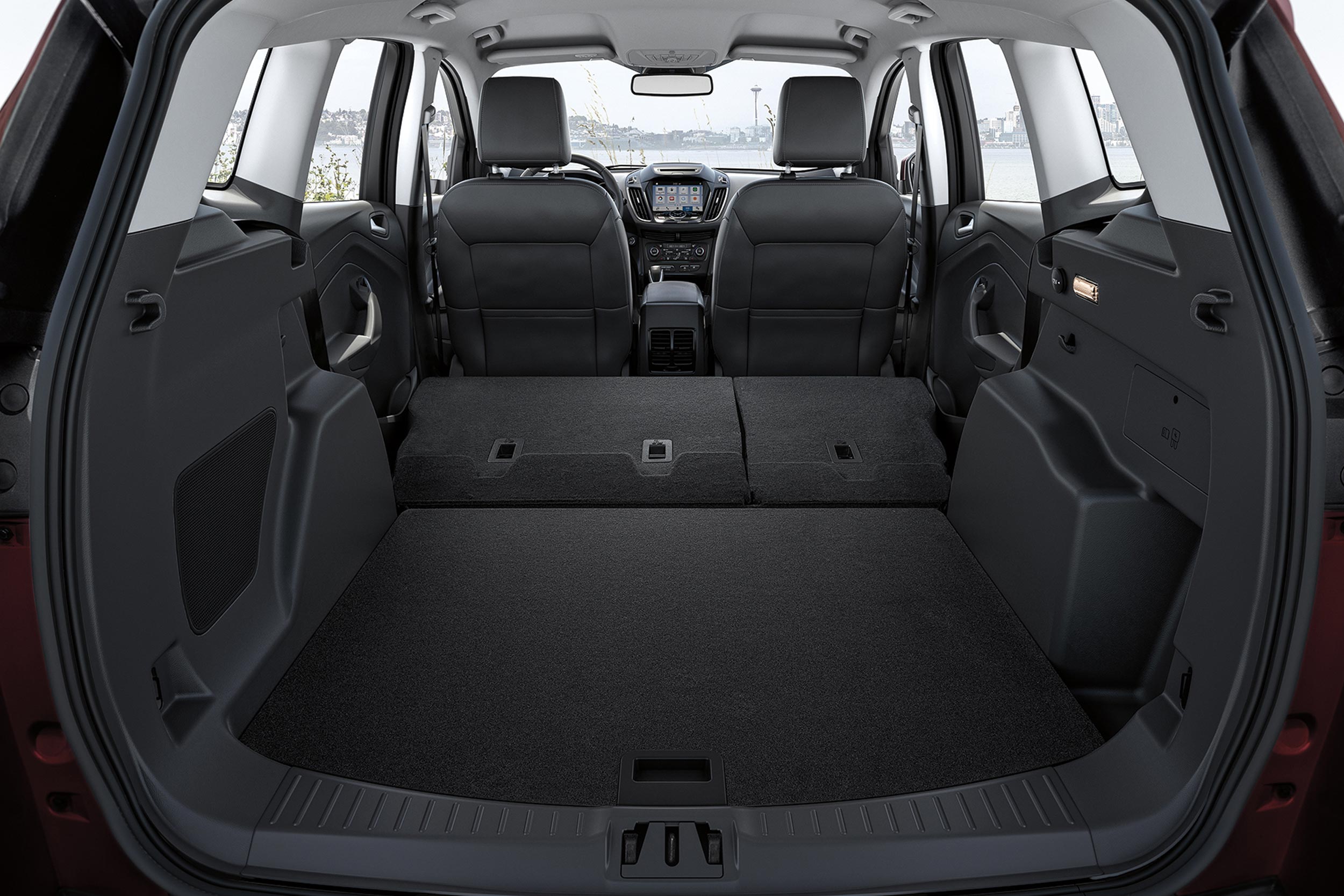 When it came time to cart home the inevitable unexpected purchases from Ye Olde Antique Barn, the second row seats flipped down with one finger, aided by headrests that snapped down at the touch of a button. The tailgate yawns open wide like a baleen whale, seemingly capable of swallowing the Escape itself. The low liftover height and long cargo area made loading the wagon wheel and grandfather clock a breeze. Yes, really.

Even after hours in the car on the way home, we still felt fresh. The seats are supportive and comfortable, with loads of leg and hip room. Road noise stays outside, along with the vibration and harshness twins.

Our Escape had the optional panoramic moonroof with power sliding shade ($1,750). As advertised, it let in fields of sunlight when we wanted it and closed at the touch of a button when we didn’t. While a spendy piece of equipment, it was greatly appreciated and will undoubtedly help future resale value. 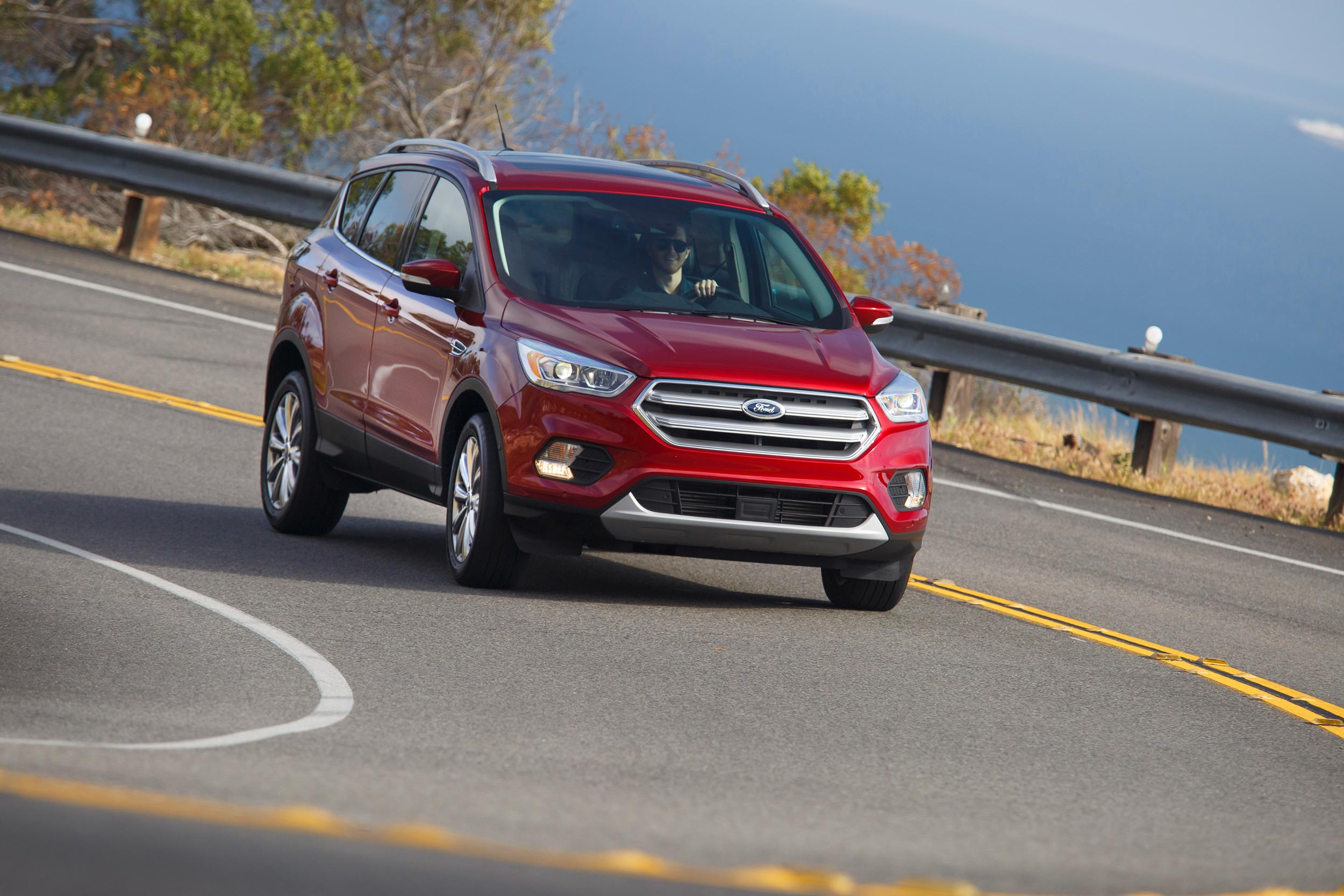 On our travels overall, we observed 22 mpg from our 2.0-liter turbo with all-wheel drive, completely in line with the 23 mpg advertised fuel economy in the combined cycle. 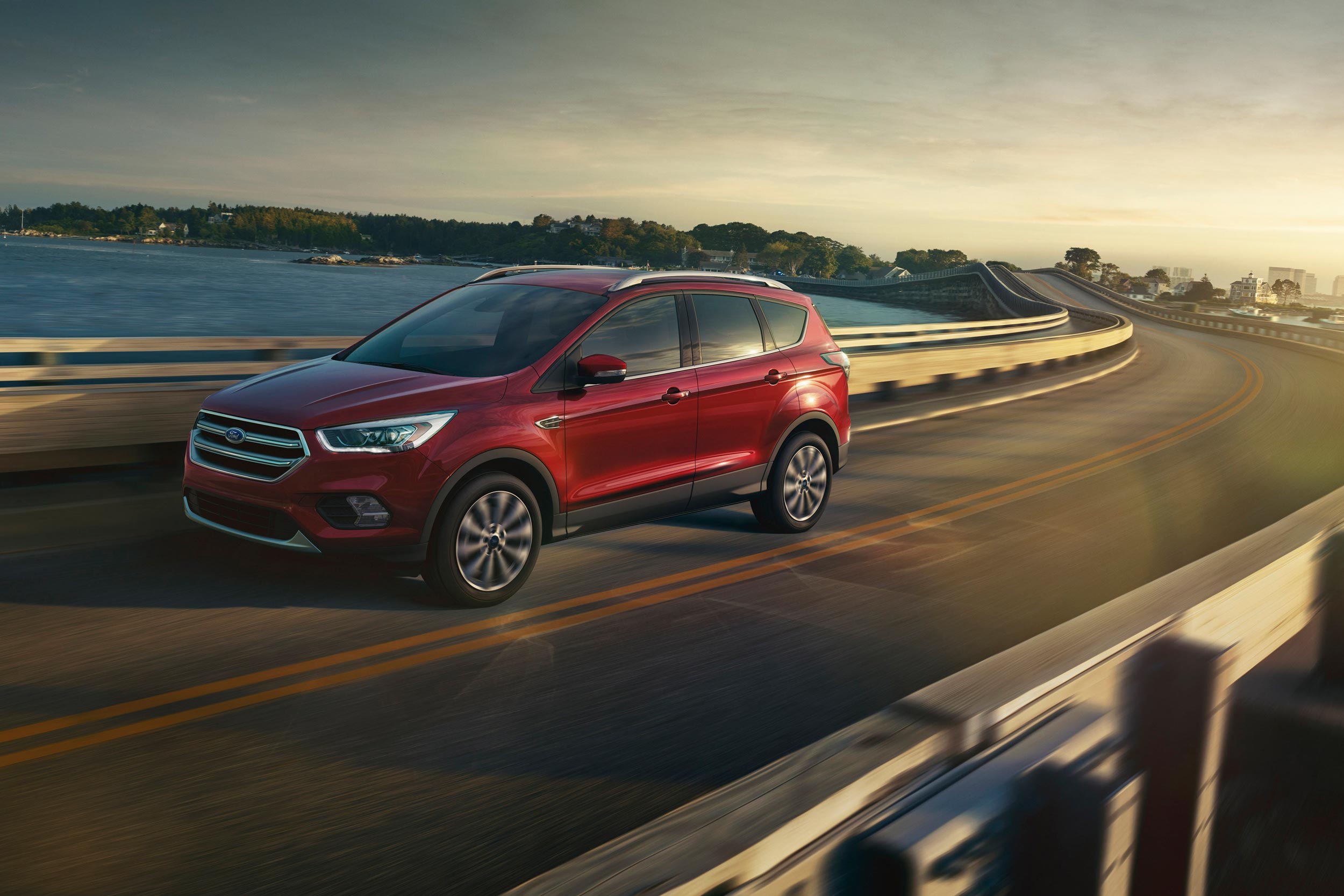 We found the Ford Escape Titanium to be one of the most congenial cars in the segment. The powertrain was smooth and delivered the goods on cue and as expected. Ride and handling were good. Comfort and amenities are superb, and the use of interior space is excellent.

To its detriment, the Escape languishes near the bottom of compact and small SUV fuel economy lists, regardless of engine choice. We would like more steering feel. The top Titanium model has many agreeable features, but starts at $32,140 and gets expensive fast when options are added.

Overall, though, the Escape does so many things well that it’s an easy car to recommend.