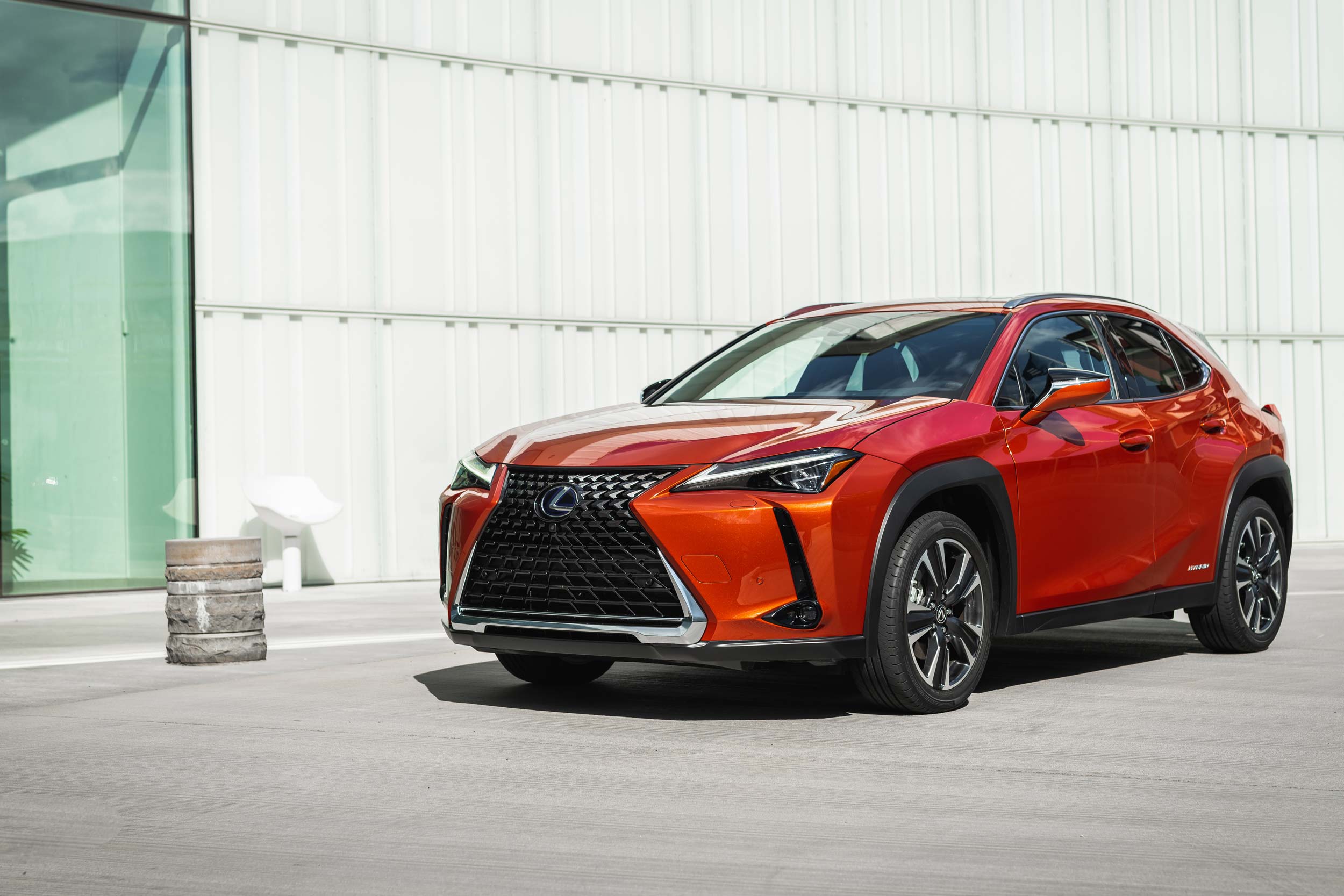 For vehicular motivation during polar vortices, we insist upon all-wheel drive (AWD). So much the better if it comes with heated leather seats and the latest in high-tech entertainment.

Every modern AWD uses sensors to continuously monitor each wheel. Torque is sent where it’s needed most, be it for crisper handling or added traction. What could be more luxurious that a car smart enough to keep itself pointed in the right direction?

Punxsutawney Phil may have predicted an early spring, but until then, stay warm and dry with one of these luxury AWD SUVs.

(Starting MSRPs are for the model and do not necessarily reflect all-wheel drive pricing.) 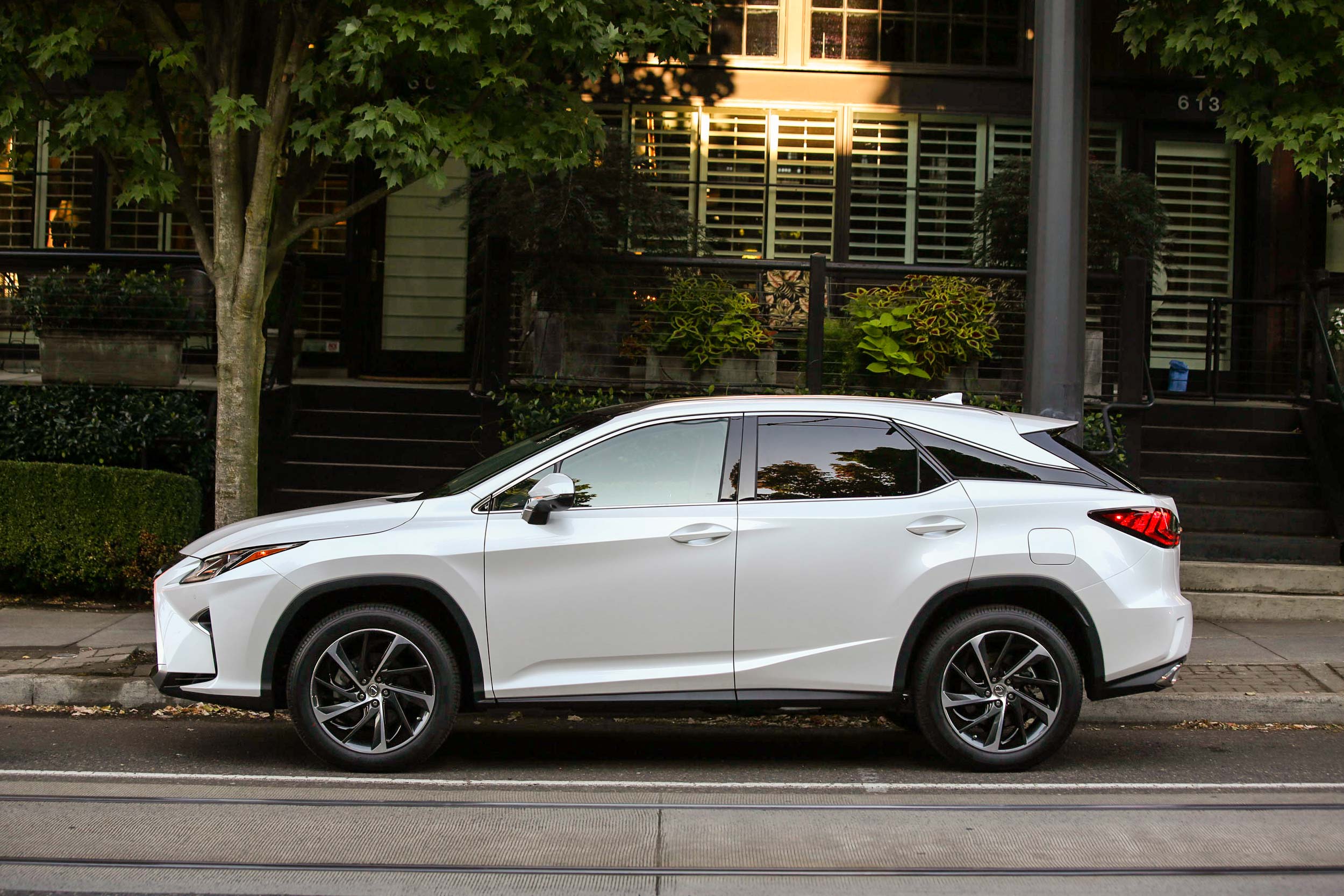 The Lexus RX has been a American favorite for years, and the latest generation wows buyers with its edgy styling and ample power.

Available with either two or three rows and seating for up to seven, the interior is plush and well-appointed. The ride is one of the best in the business, and passenger comfort is the RX’s party piece. Of all the cars we ride in, the RX is one of our favorite places to be.
The RX comes standard with a powerful 295-horsepower V6 mated to an eight-speed automatic, while RX L models get 290. All-wheel drive adds $1,400 to the 350 models. Hybrid 450h models have 308 total system horsepower and AWD as standard fare. 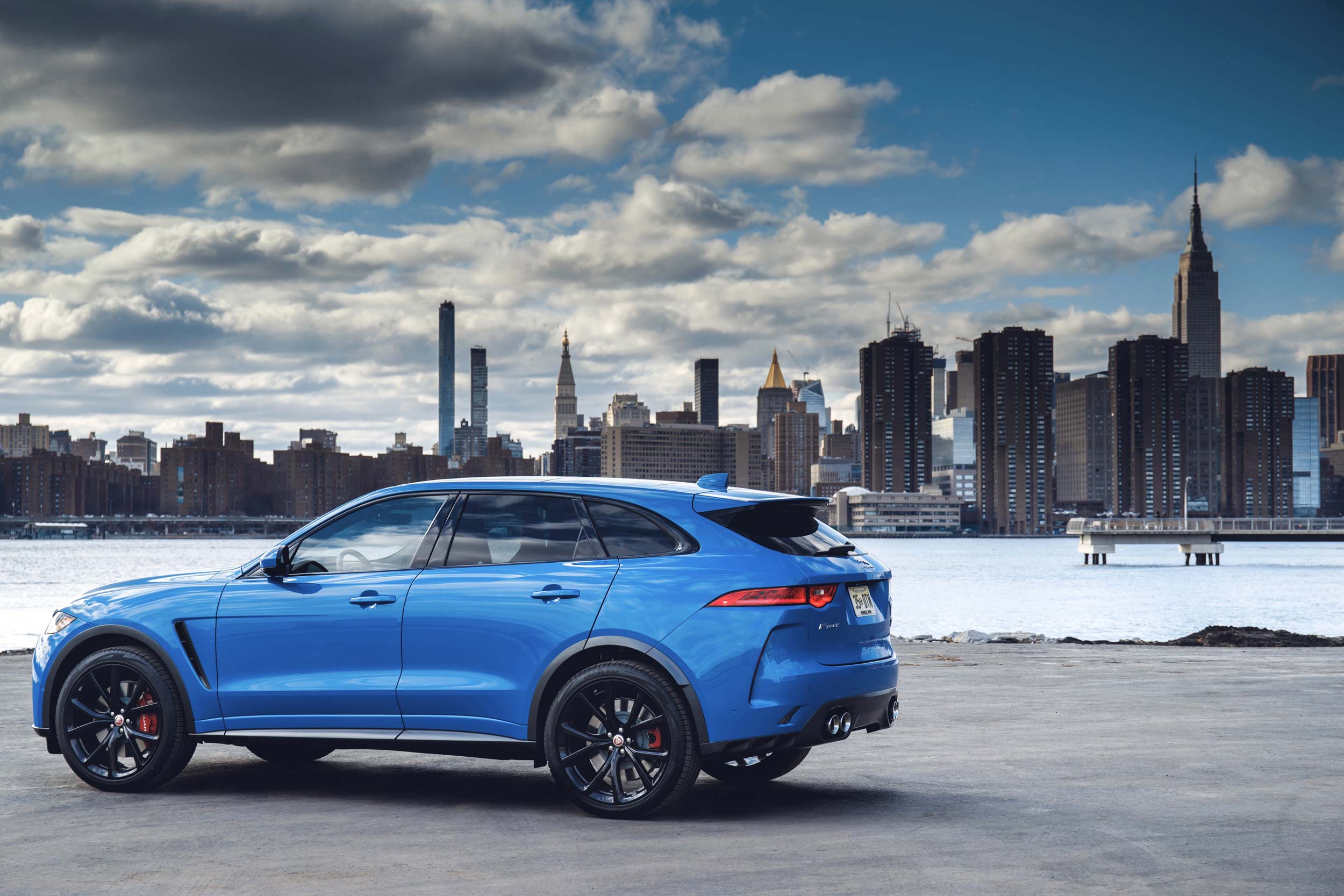 Jaguar’s F-Pace all-wheel drive crossover is a swoon-worthy blend of luxury, performance, and capability. The sexy ute was penned by Ian Callum and won two World Car of the Year awards its debut year, one overall and one for design.

On the other end of the “fun” spectrum, a 180-horsepower diesel is offered with somewhat better fuel economy and marginally fewer CO2 emissions.

No matter the model, the F-Pace is an engaging car to drive. The lightweight aluminum architecture is tightly controlled, and returns crisp handling and precise steering without sacrificing ride. 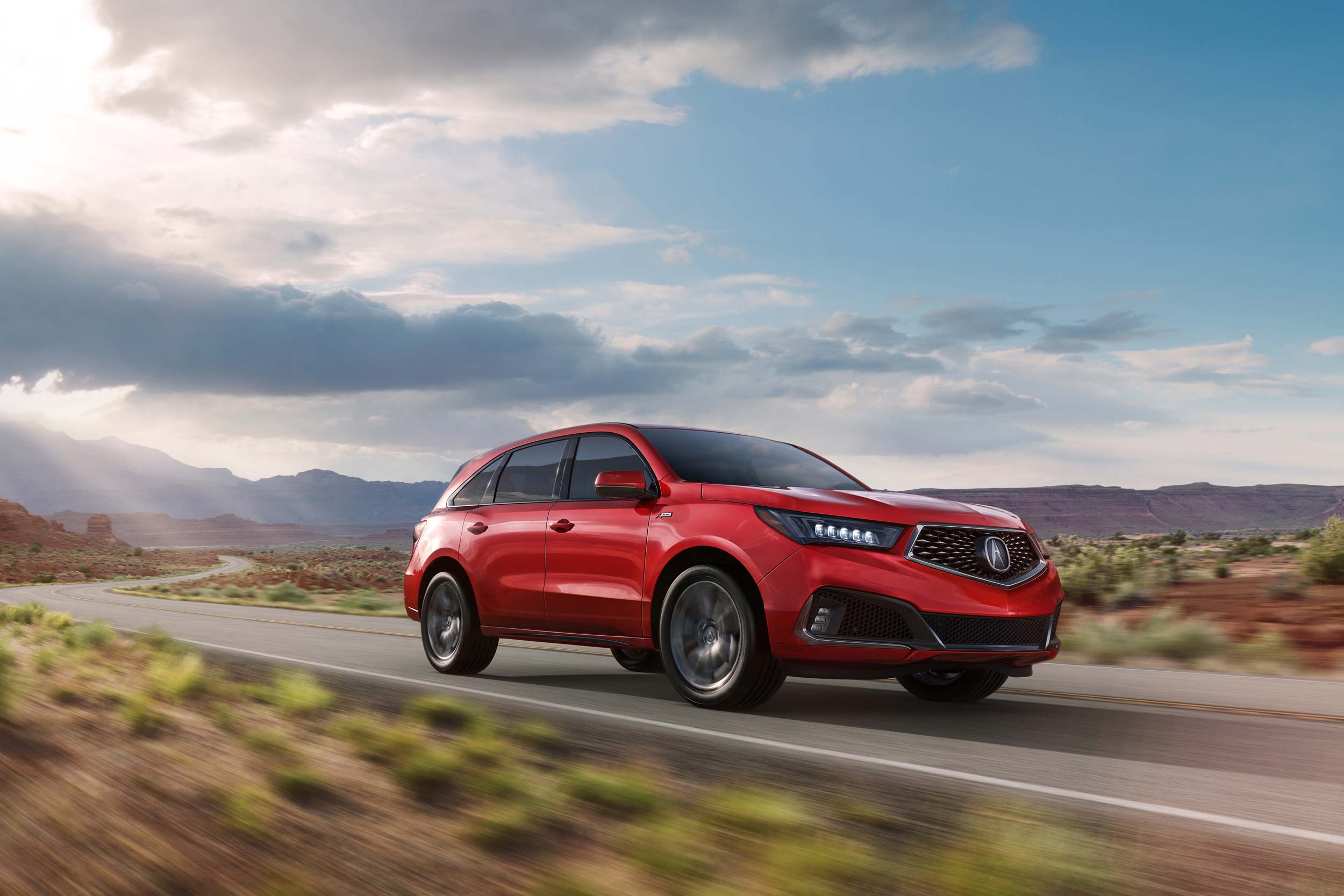 The Acura MDX scores high with owners and critics alike for its features, performance, and value for money. Almost a million examples have been sold since the model’s inception, making it the best-selling three-row SUV of all time.

For 2019, Acura has upgraded the interior, expanded exterior color choices, and added the sporty A-Spec variant.

Standard models are equipped with a 3.5-liter direct-injected V6 with 290 horsepower and 267 lb-ft of torque. All-wheel drive adds $2,000 to the base price, a system that Acura calls “Super Handling All-Wheel Drive.” Weight distribution, available traction, yaw, pitch, G-forces, and other factors are continuously monitored and torque sent where it’s needed most. In acceleration, it transfers rearward to take advantage of grip. In a straight line, 90 percent is sent to the front for efficiency. The system is even savvy enough to send 70 percent of the effective torque to the outside rear wheel under hard acceleration out of a curve.

A hybrid version of the MDX is also offered. It pairs a 3.0-liter V6 with three electric motors—one front and two rear— for a total of 321 horsepower and 289 lb-ft of torque. 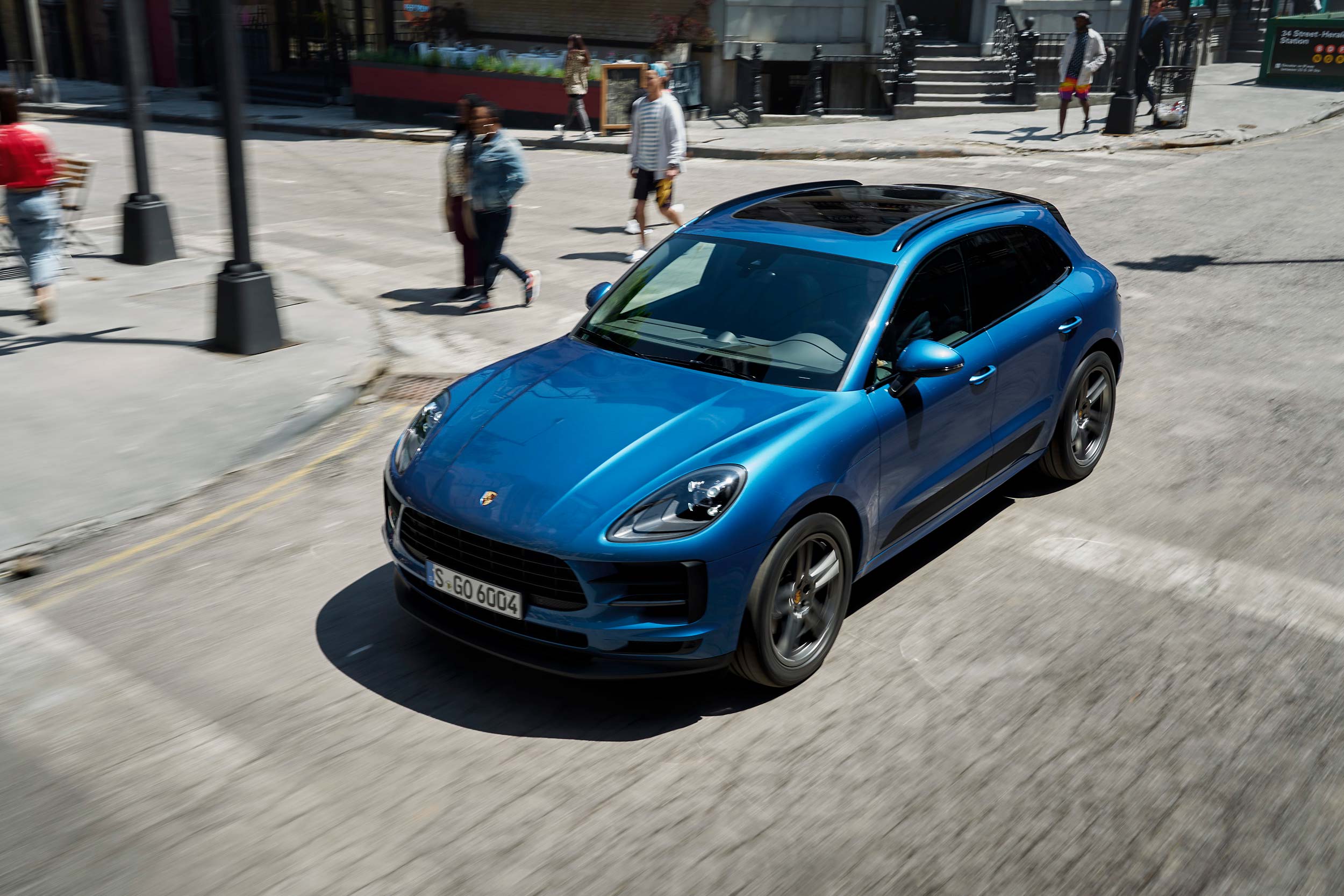 Stuttgart’s smallest SUV is the compact all-wheel drive Macan. Critics and owners alike praise it for joyous driving characteristics across the trim range.

Base 2019 models are powered by a 2.0-liter turbo four-cylinder with 248 horsepower and 273 lb-ft of torque. Though the baby of the family, the small block will still run the Macan to 60 in just a hair over six seconds, and torque delivery feels larger than it sounds.

S models get an exciting new turbo V6 with 348 horsepower and 354 lb-ft. Both engines are mated to a seven-speed wet multiplate transmission that is an absolute hoot to paddle shift during spirited driving.

Either engine motivates a chassis that is grin-inducing to drive. The Macan is a perfectly poised companion around town and feels more solid that its size would belie. Spank it hard on a country road, though, and the Porsche pedigree flows through the steering wheel to the driver’s soul. 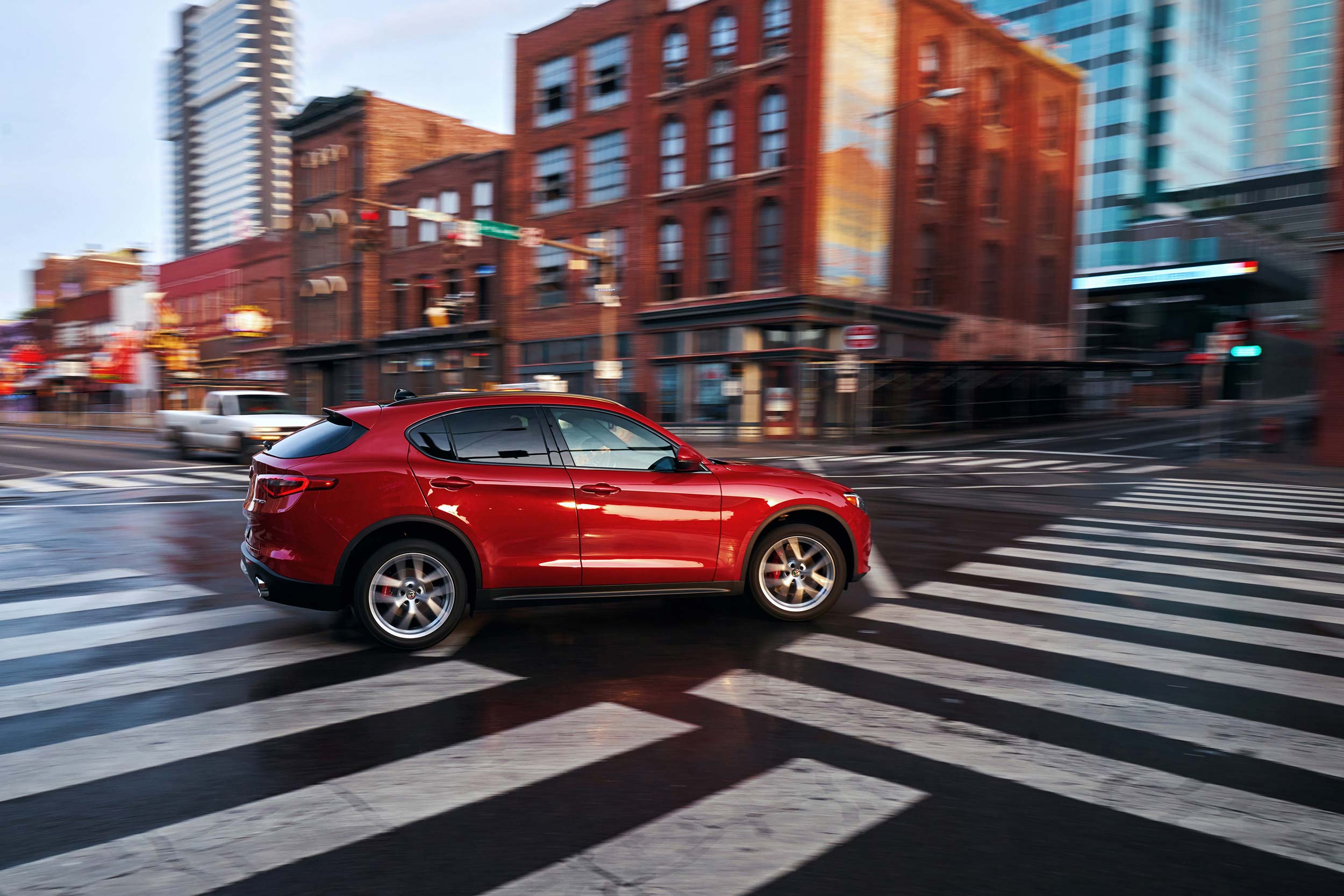 The Stelvio adds a healthy dash of style and performance to the two-row luxury segment.

Of all the jobs for an SUV, “track day terror” is not a title that comes to mind, yet the Stelvio Quadrifoglio ($81,390) stormed the Nürburgring and took the record for fastest production SUV with a lap time of 7 minutes and 51.7 seconds.

Even in base trim, Alfa’s charismatic SUV offers 280 horsepower from its 2.0-liter turbo four-cylinder, 50/50 weight distribution, and available AWD for an added $2,000 (rear-wheel drive is now the base model, hence the lower starting MSRP for 2019). Handling is superb with precise steering and controlled body roll.

We love the interior, with flairs of black or red leather, wood trim, and pure Italian elegance. Android Auto and Apple CarPlay are now standard through a 6.5-inch touchscreen infotainment system, with the option of adding an 8.8-inch unit with 3D navigation. 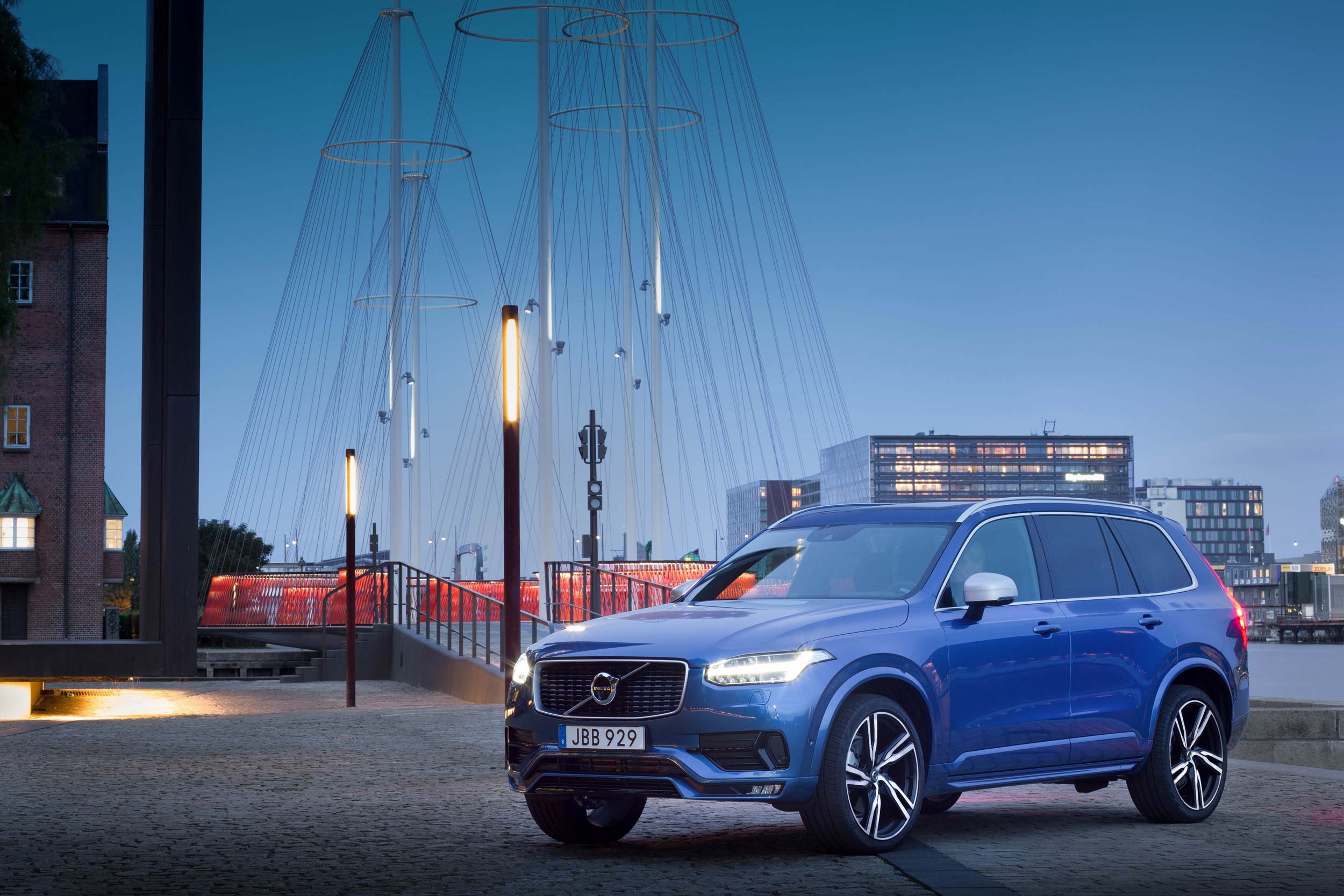 Volvo’s seven-seat XC90 has won literally dozens of awards around the world in multiple categories for the excellence of its design and engineering.

Sweden’s flagship is the Volvo XC90. Since its first appearance in 2015, it has been awarded more titles than the Queen: Car Of The Year, Luxury Car of the Year, SUV of the Year, Best Technological Car, Top Pick for Parents, Driver’s Choice, Best 2-litre SUV, Truck of the Year, Top Safety Pick, ad infinitum.

Being a Volvo, safety is at the forefront. All XC90s feature lane keeping assist, blind spot assist, oncoming lane mitigation, and rear collision mitigation. A semi-autonomous drive system is also standard and allows the XC90 to follow along in traffic, keeping it in its lane and at a safe following distance. 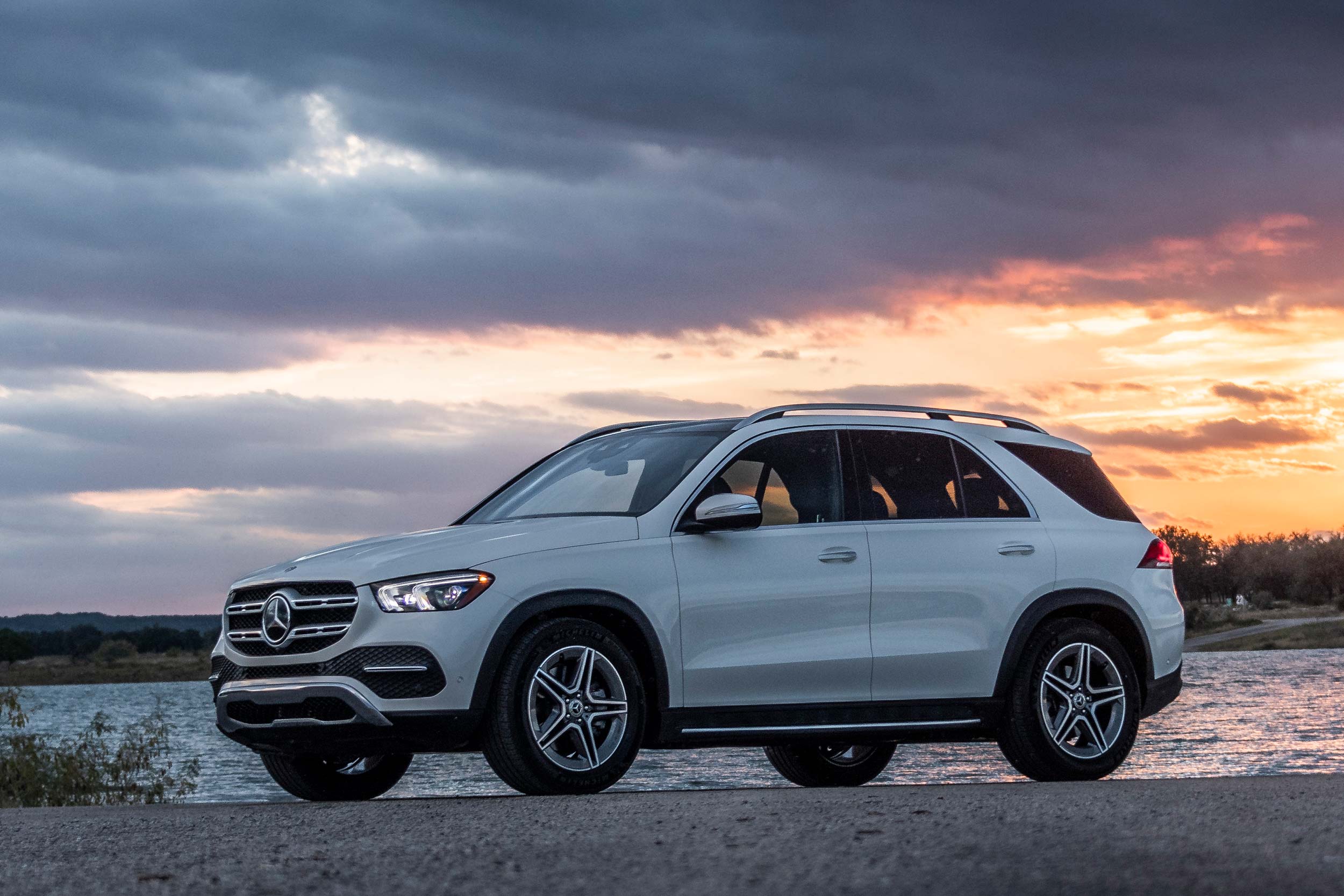 The 350 models will launch with a 2.0-liter turbo inline-four with 255 horsepower and 273 lb-ft of torque on tap. The 450 will have a 3.0-liter inline-six with 362 horses and 369 lb-ft. The new engine uses a 48-volt system with an integrated starter-generator for energy recuperation.

Also offered on the 450 is an active body control system that scans the road surface and senses curve inclination. Taking advantage of the powerful electrics, spring and damping can be controlled at each wheel individually. The new GLE can now venture off road and even free itself if stuck by raising and lowering the suspension to control traction at each corner. 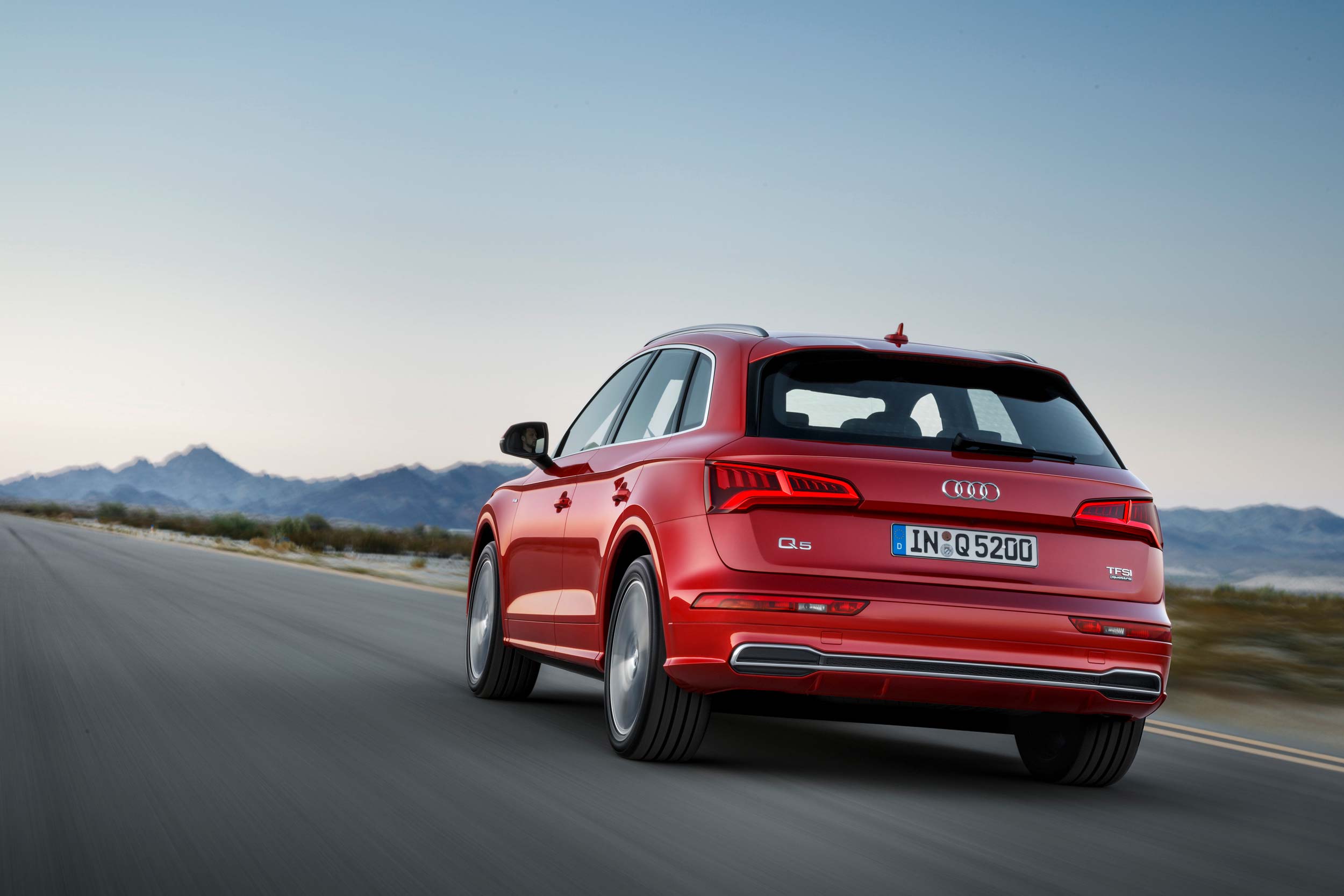 Motivation comes in one flavor: a 2.0-liter turbocharged four-cylinder making a sprightly 252 horsepower and 273 lb-ft of torque. A seven-speed dual-clutch automatic transmission will scoot the five-seater to 60 in just 5.9 seconds.

Advanced safety and driver assistance features add to the value. Automatic emergency braking is paired with a pre-collision system that pre-tensions seat belts, starts to close windows, and can initiate full braking at speeds up to 52 mph. Side and rear cross traffic alerts are standard, with adaptive cruise control and traffic sign recognition available. 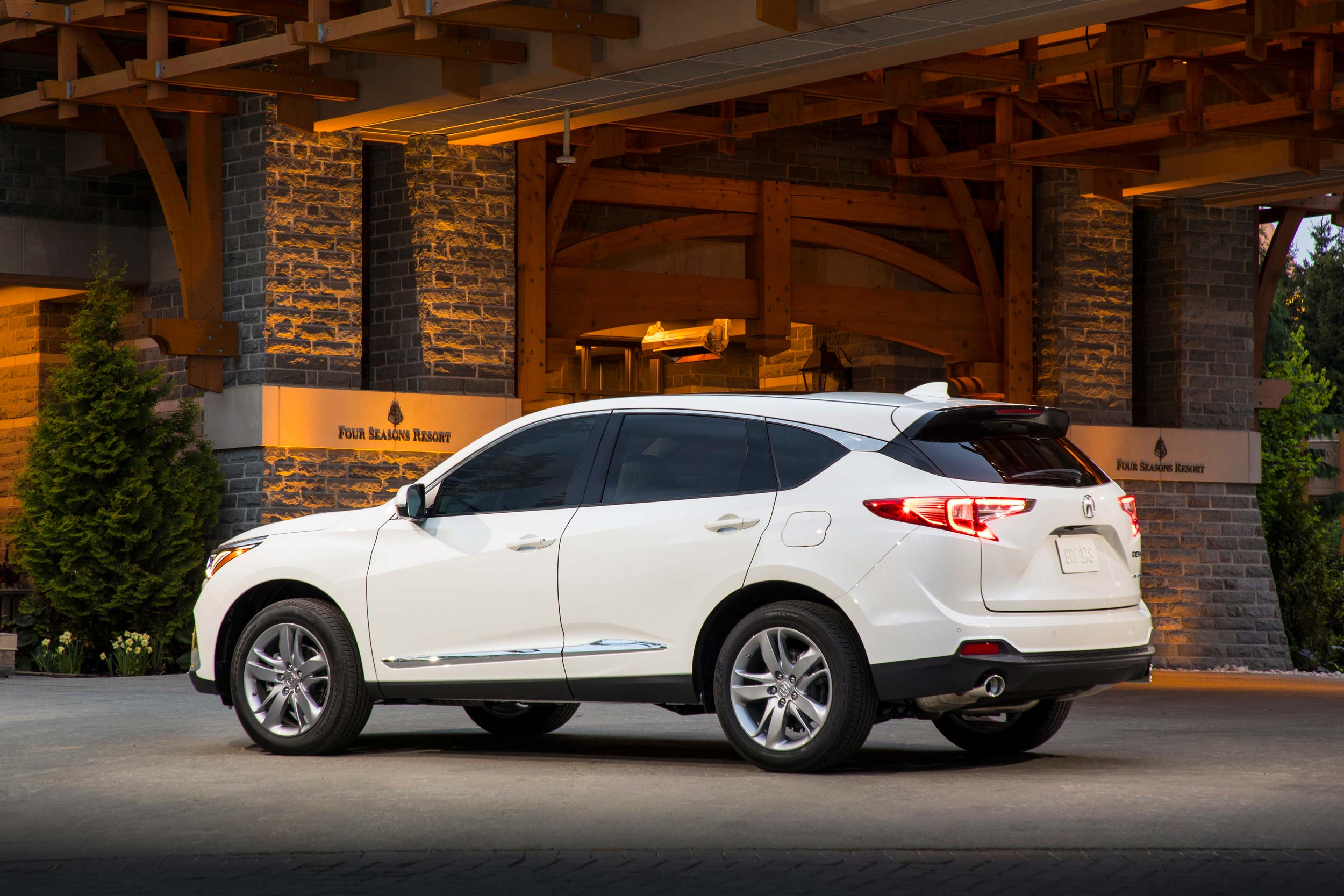 Acura’s midsize RDX crossover was redesigned for 2019 and has been exceedingly popular with buyers. The model has broken several company sales records.

A four-liter turbo now lives under the hood (in place of the previous V6) and produces 272 horsepower and 280 lb-ft of torque. Front-wheel drive is standard; Acura offers its “Super Handling All-Wheel Drive” for an additional $2,000. The system automatically distributes torque front-rear and left-right depending on conditions and driver input. With independent wheel control, the crisp handling and precise balance are effortless. 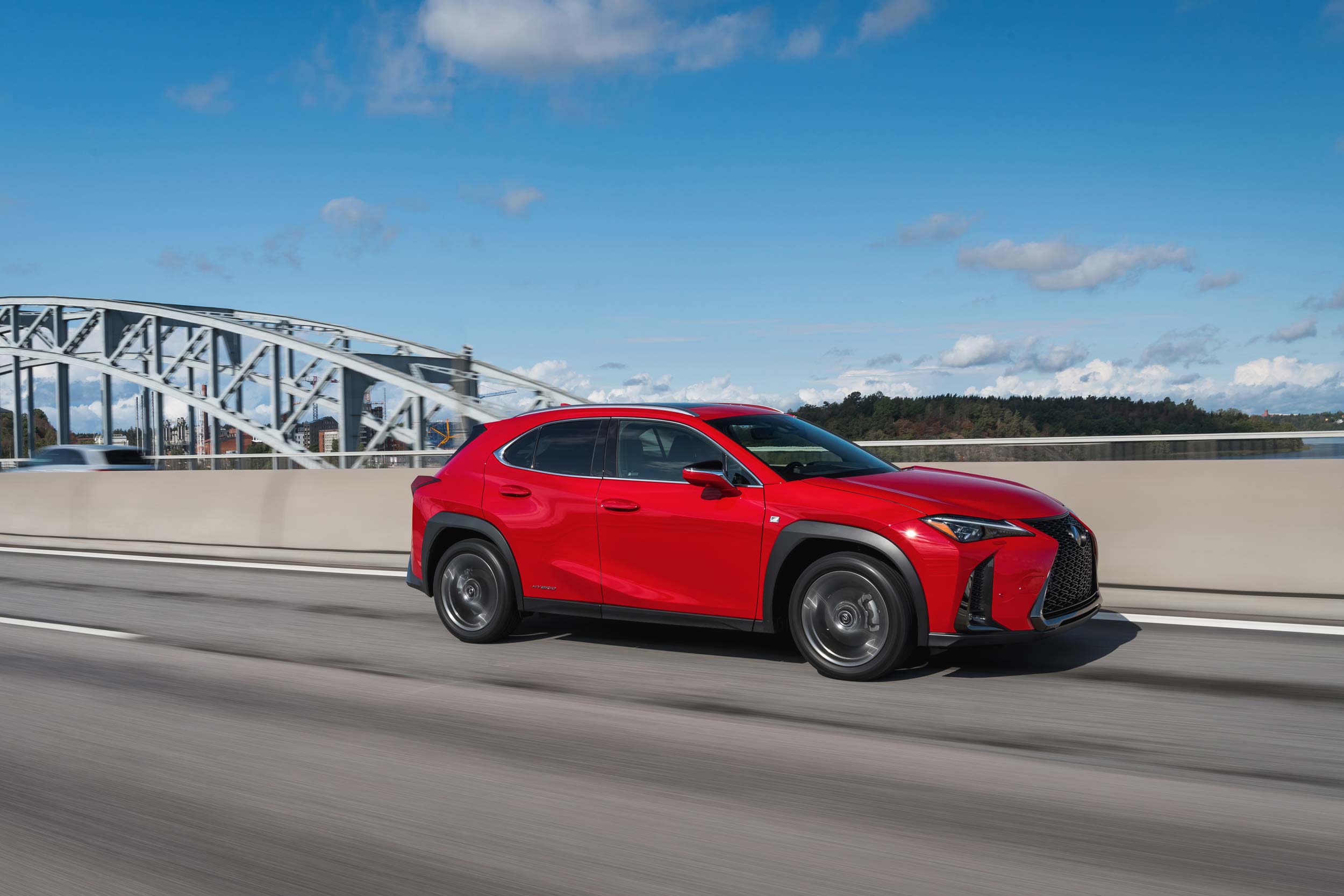 The latest from Lexus is the all-new UX compact luxury crossover. The new model is designed for city life and debuted in December, with the all-wheel drive version appearing (UX 250h, $34,000) appearing in dealerships in January.

This is the first vehicle built on Lexus’ lightweight Global Architecture Compact platform. The rigid structure and low center of gravity deliver engaging handling with a luxury-smooth ride.

Powering the charismatic 250h all-wheel drive compact is a high-efficiency 2.0-liter driving the front wheels, paired with the fourth generation of Lexus’ two motor-generator hybrid system driving the rear. Total system output is 181 horsepower and will send the cute ute to 60 in 8.6 seconds. Fuel economy for the urban crossover is a blistering 39 mpg in the combined cycle.

The interior has a serenity we love, with the focus clearly being on the driver. The seats are comfortable, yet firm and well-bolstered. The heated and ventilated seats are linked with the climate control for optimum comfort.

Six-speaker infotainment is controlled from a standard 7-inch display, with the option of eight speakers and a 10.25-inch display.

A sporting F model of the UX 250h is offered with revised suspension for a tighter ride. A special grille and bumpers give a more aggressive appearance, with 18-inch wheels completing the package.