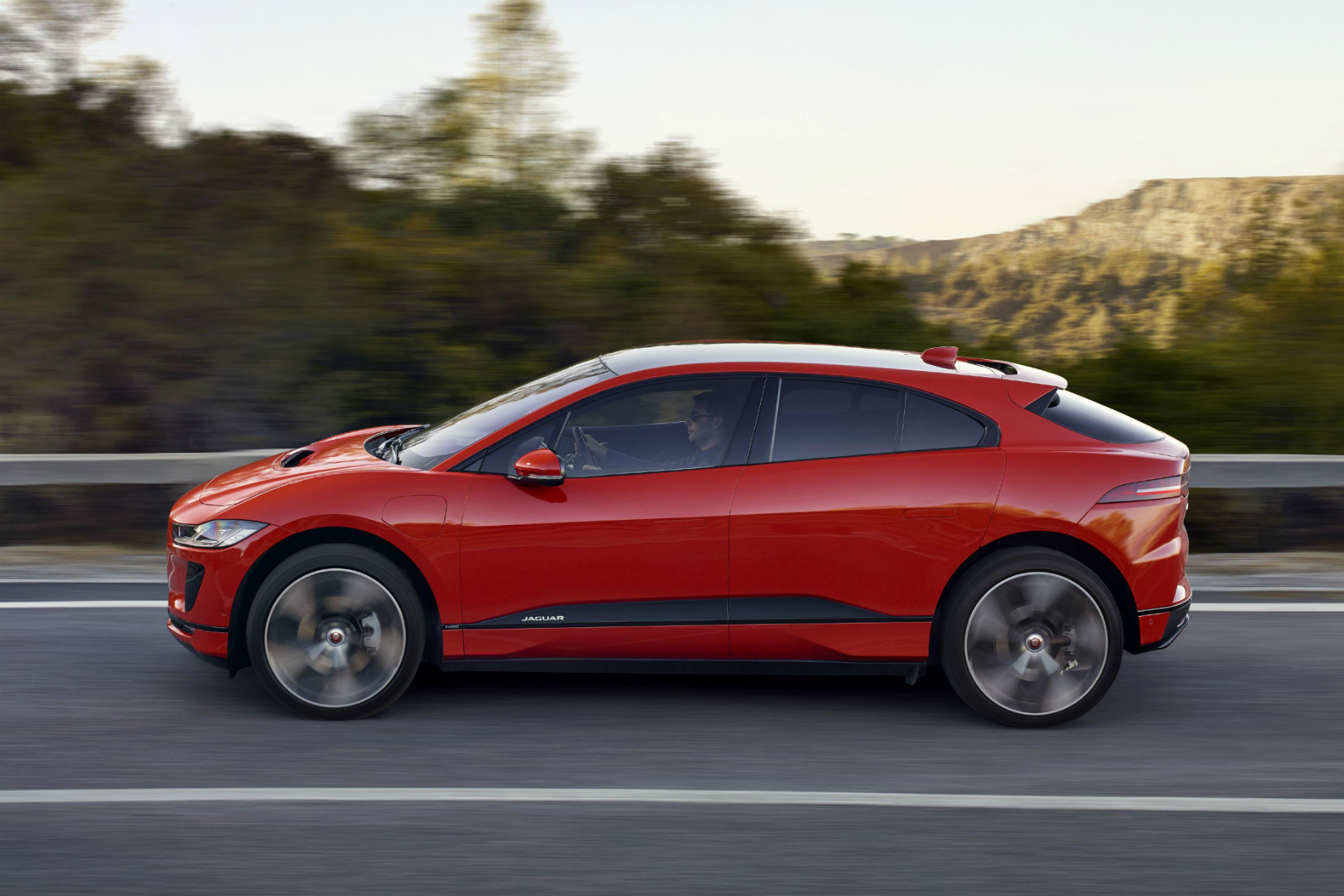 Range anxiety – the fear of not making it to your destination without recharging – is a big concern for those buying an electric vehicle (EV). We’ve done the research and ranked 20 battery EVs currently on sale in order of range when fully charged.

It’s important to note that we are listing purely battery-powered vehicles here, so plug-in hybrids are not included. The range figures are from New European Driving Cycle (NEDC) tests. A new ‘WLTP’ test-cycle is well on the way to phasing out NEDC results, and thus some of the newest cars on this list have estimated range results. Prices quoted include government EV grants where relevant. 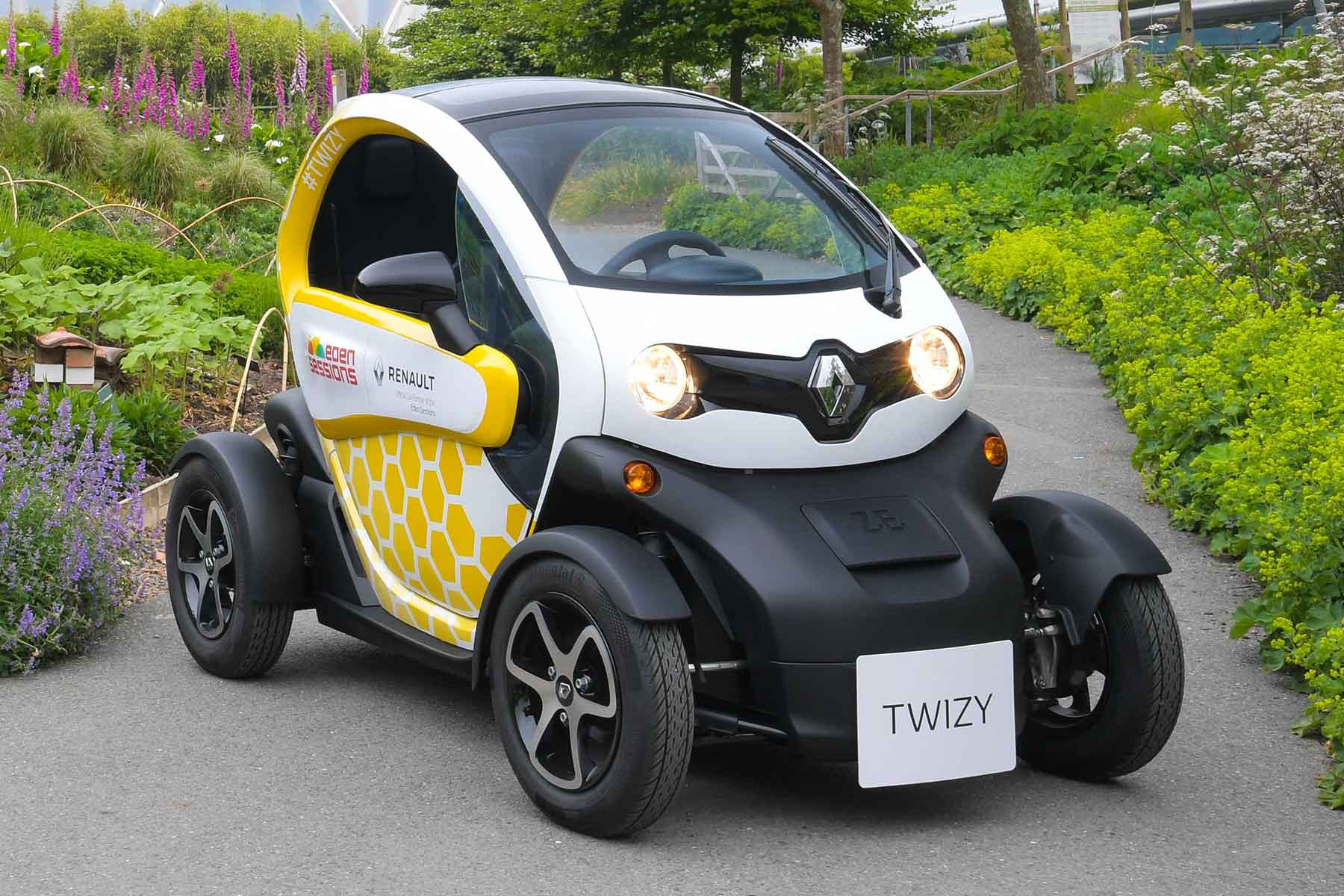 Is it a car? Well, technically the Renault Twizy is classed as a quadricycle, meaning it has to conform to limits on weight and power. Fitted with a 13kW (17hp) motor driving the rear wheels, the Twizy is capable of just 50mph. But being designed for city use suits it just fine, as does an NEDC range of 62 miles. Prices are also low, starting at £6,690, plus compulsory battery rental. 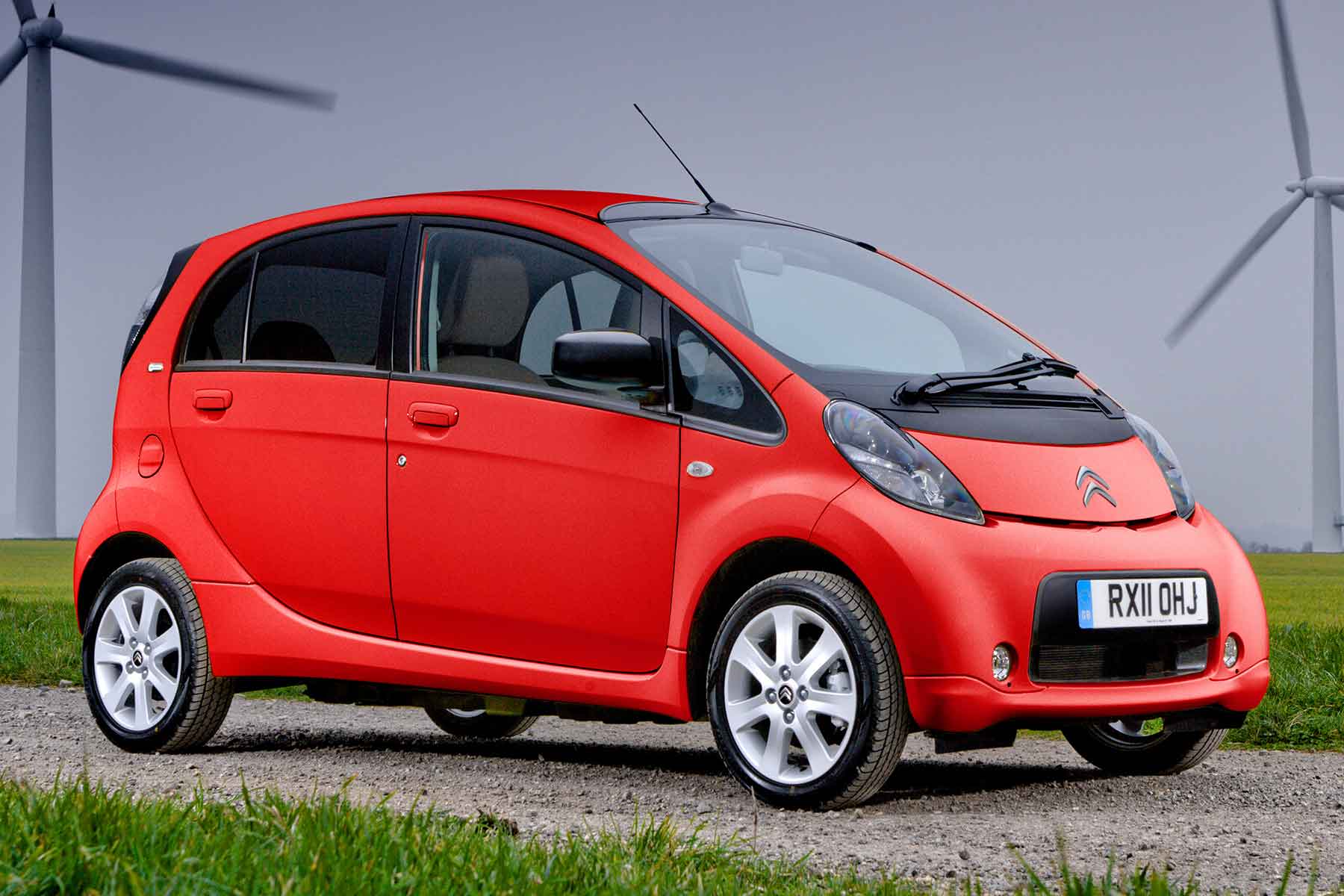 Essentially a rebadged version of the Mitsubishi i-MiEV – a car no longer sold in the UK – the C-Zero ups the power stakes to 49kW (67hp). The rear-mounted motor drives the back wheels, and is claimed to be capable of pushing the C-Zero to an 80mph top speed. Driving like that won’t help the 93-mile range, though. It costs from £16,020. 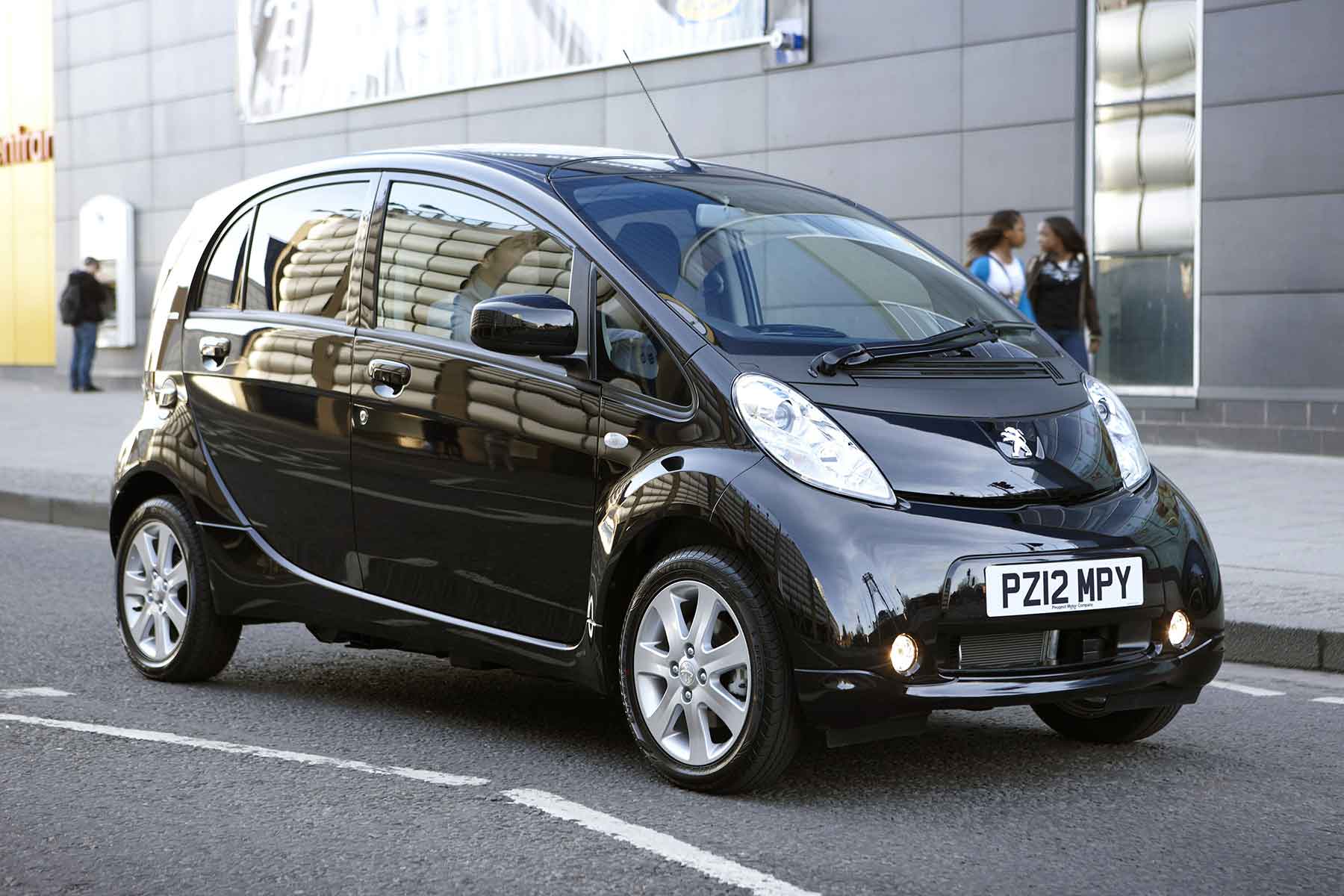 Identical to the C-Zero in looks and powertrain, the Peugeot iOn also matches its 93-mile NEDC range. Similarly, it takes nine hours to charge from a domestic plug socket, but can be topped up to 50% capacity in just 15 minutes when connected to a rapid charger. The iOn costs £15,995 – big money for a car that has made only a small impact on the UK electric car market. 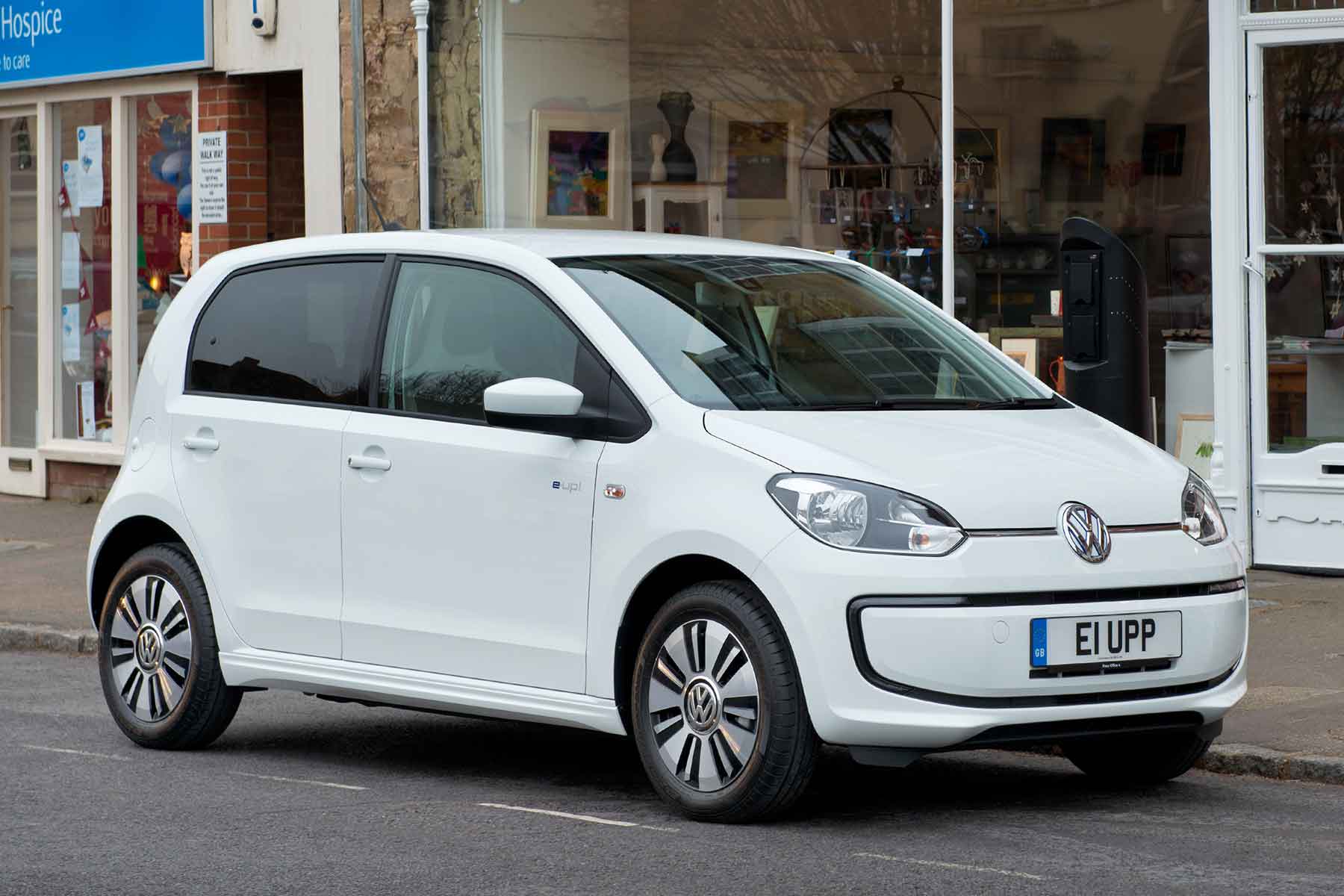 Although Volkswagen is now fully embracing EVs, until very recently it chose to base electric cars on existing models. Out goes the regular petrol engine from the Up, and in comes a 60kW (82hp) electric motor powering the front wheels. Rapid charging will fill the 18.7kWh battery in just 30 minutes, and the e-Up enjoys a range of standard kit including parking sensors, cruise control and DAB radio. But, with a price of £21,140, this is a very expensive city car. 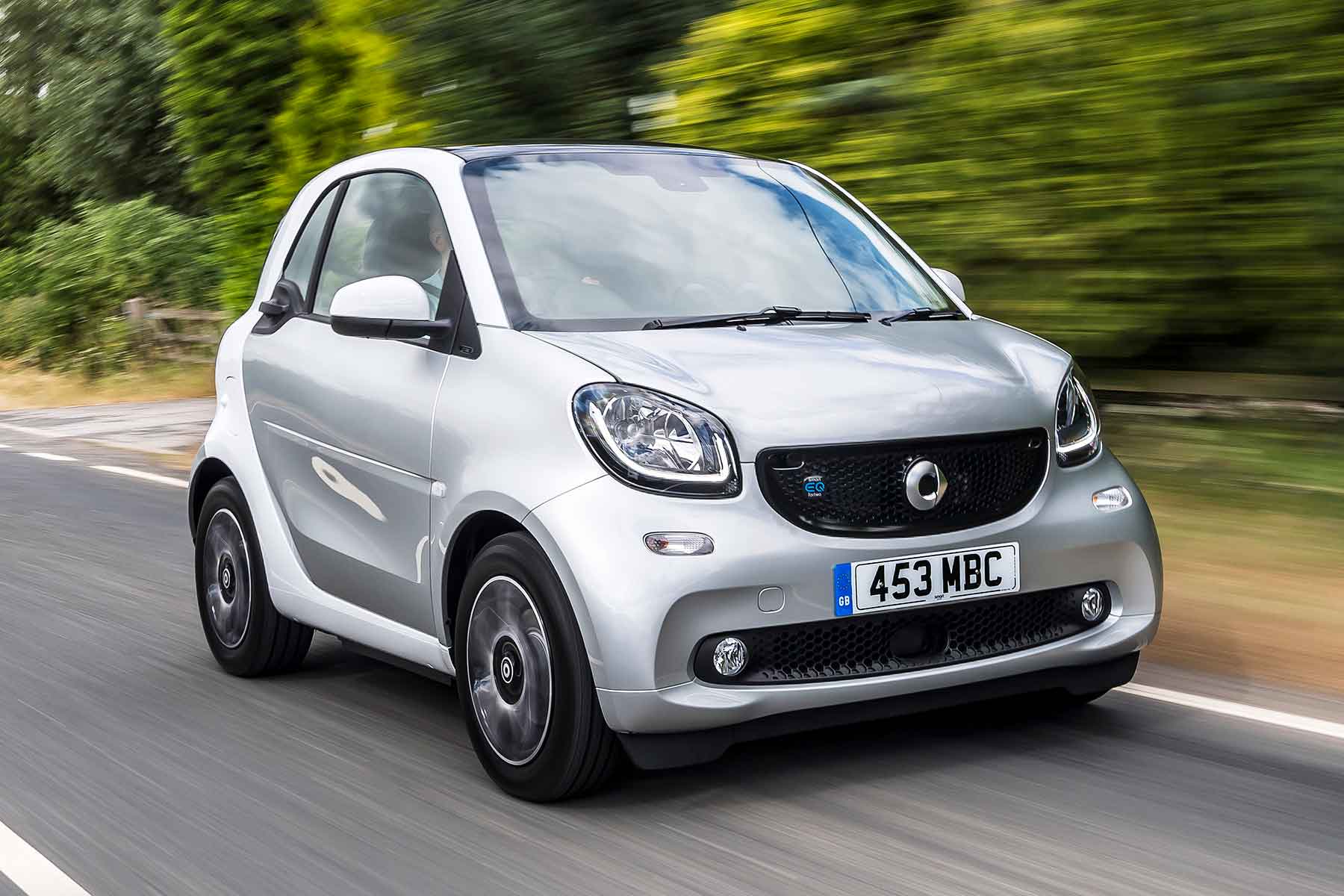 We’ve had the pleasure of little Smart cars on our roads for 20 years now. It seems like a car that should always have been electric-powered. As it happens, electric Smarts are available now, in three flavours no less: four-door ForFour, ForTwo Coupe and ForTwo Cabriolet. With less than 100 miles range, they’re not exactly long-distance haulers, but they’re certainly capable city cars. Pricey, though, with the ForTwo coupe kicking off the range from £20,920. 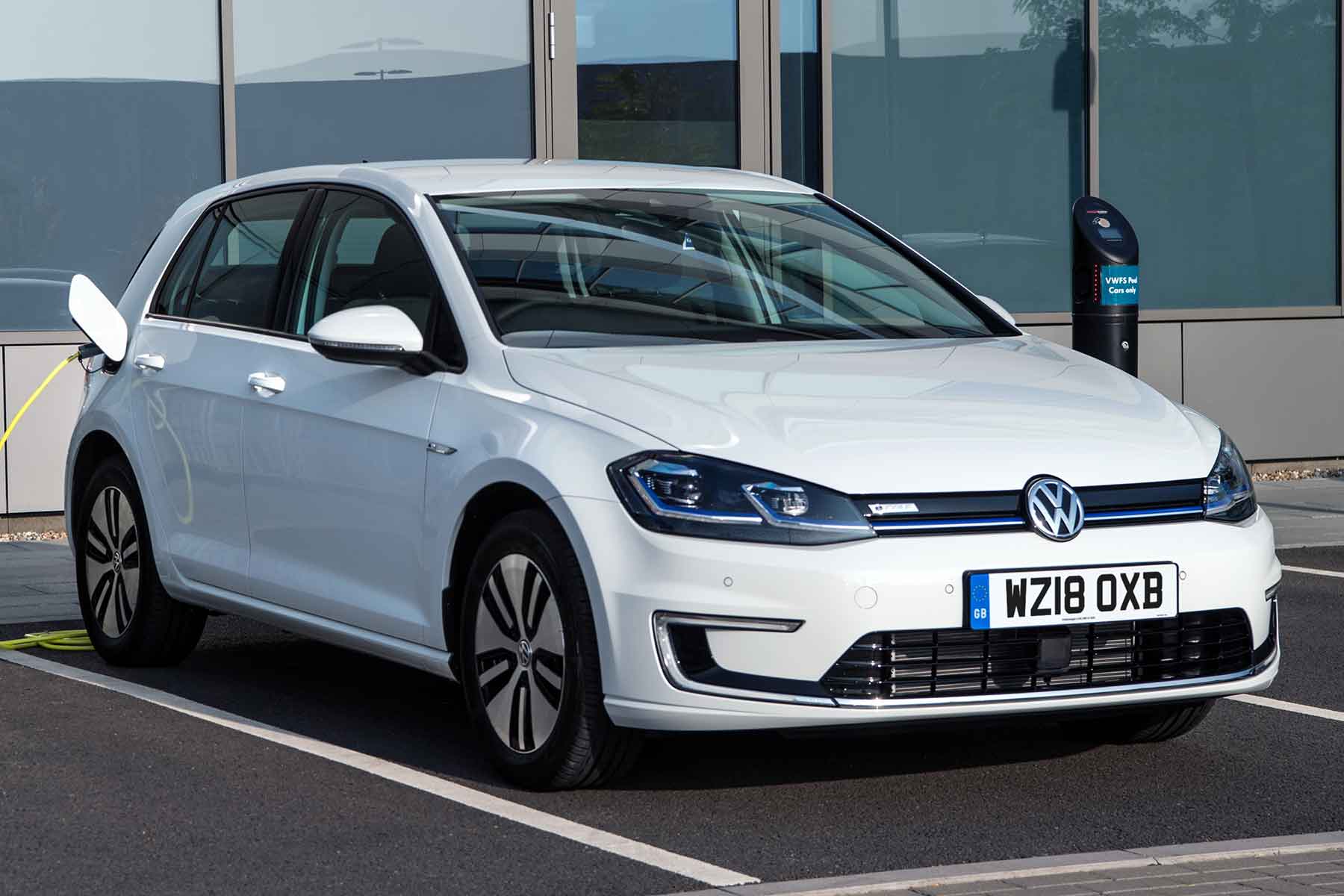 It might look like a Golf but, as with the e-Up, this is anything but a normal VW underneath. There’s a 100kW (136hp) electric motor driving the front wheels, which makes the e-Golf capable of 0-62mph in mild-to-warm 9.6 seconds. The 214lb ft of torque also helps acceleration feel brisk, even if top speed is only 93mph. An NEDC range of 144 miles is just about reasonable, but the price is steep. The e-Golf starts from £32,730. 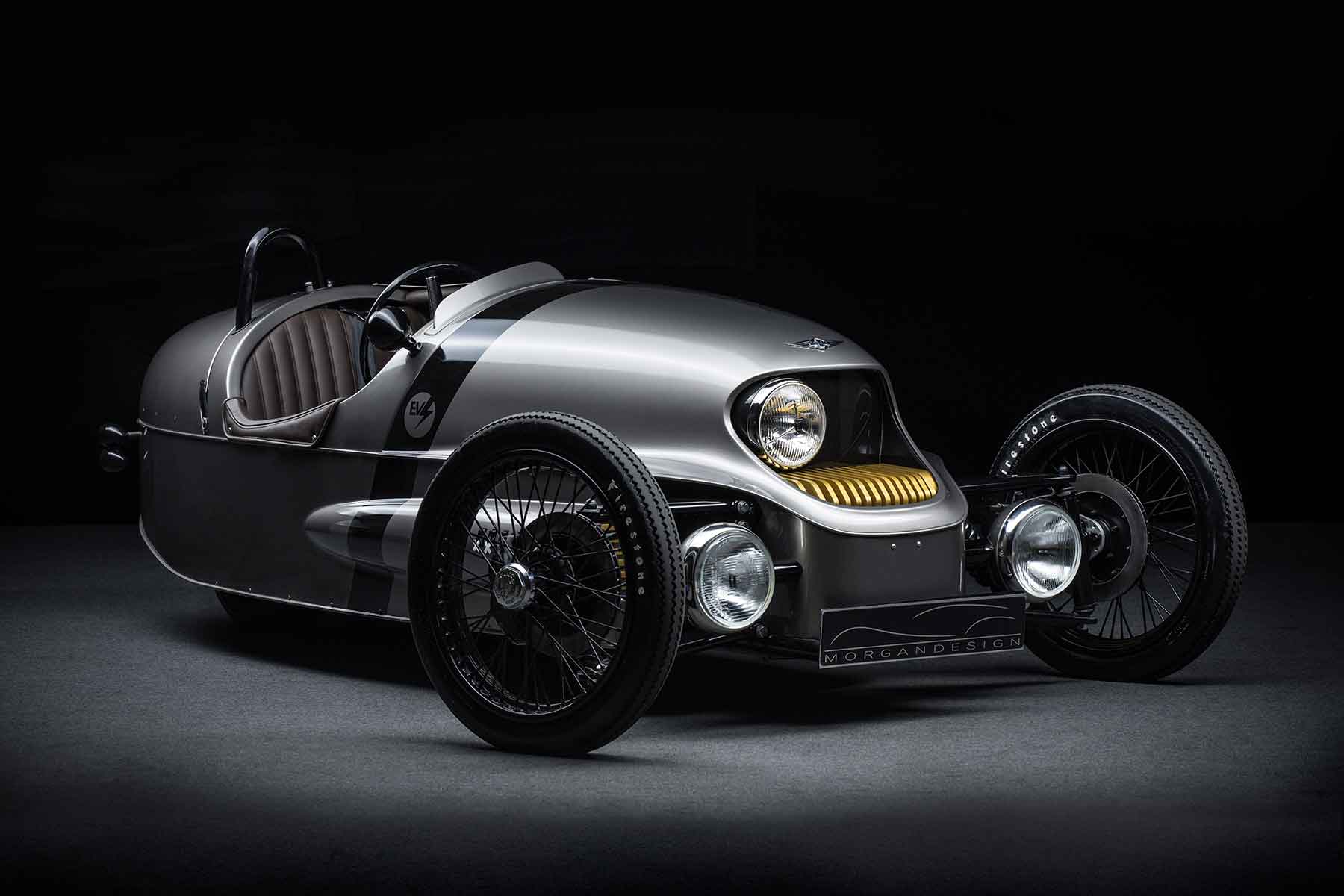 We’re still waiting on a finalised production version of this battery-powered Morgan 3 Wheeler, but it’s too cool not to include. Morgan claims the EV3 will have a range of 150 miles, along with the ability to hit 62mph in nine seconds and a top speed of 90mph. With a planned weight of less than 500kg, and packing a 20kWh battery, those figures are fully believable. 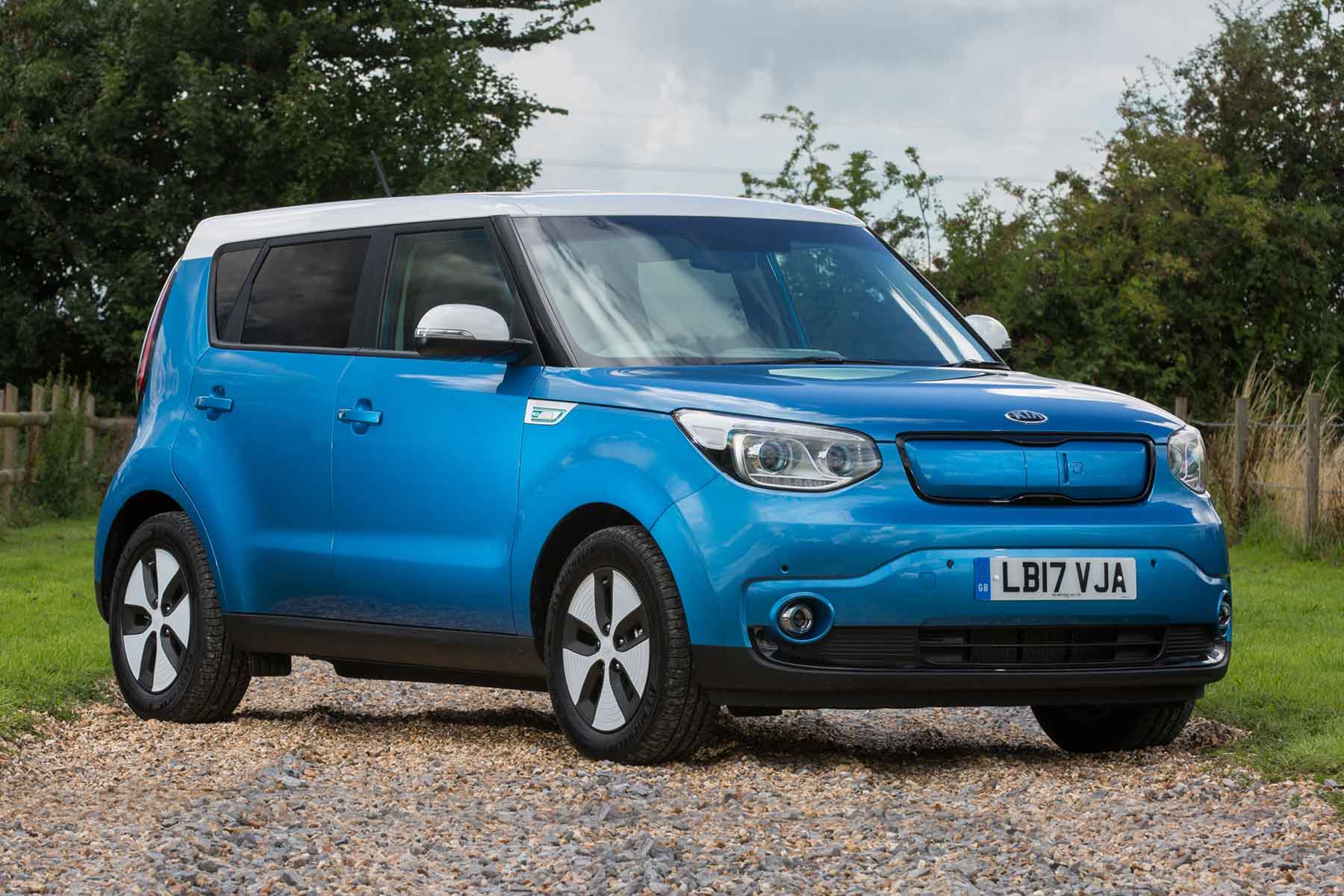 The Soul is a fairly unique looking vehicle to begin with, so Kia making it electric probably shouldn’t seem surprising. More startling is the price tag of £25,995. That represents a jump of more than £2,000 from the most expensive petrol-engined Soul, and makes this a direct competitor to premium rivals like the e-Golf. Notably, the EV still comes with a seven-year/100,000-mile warranty like any other Kia model, which is a big deal in the EV world. 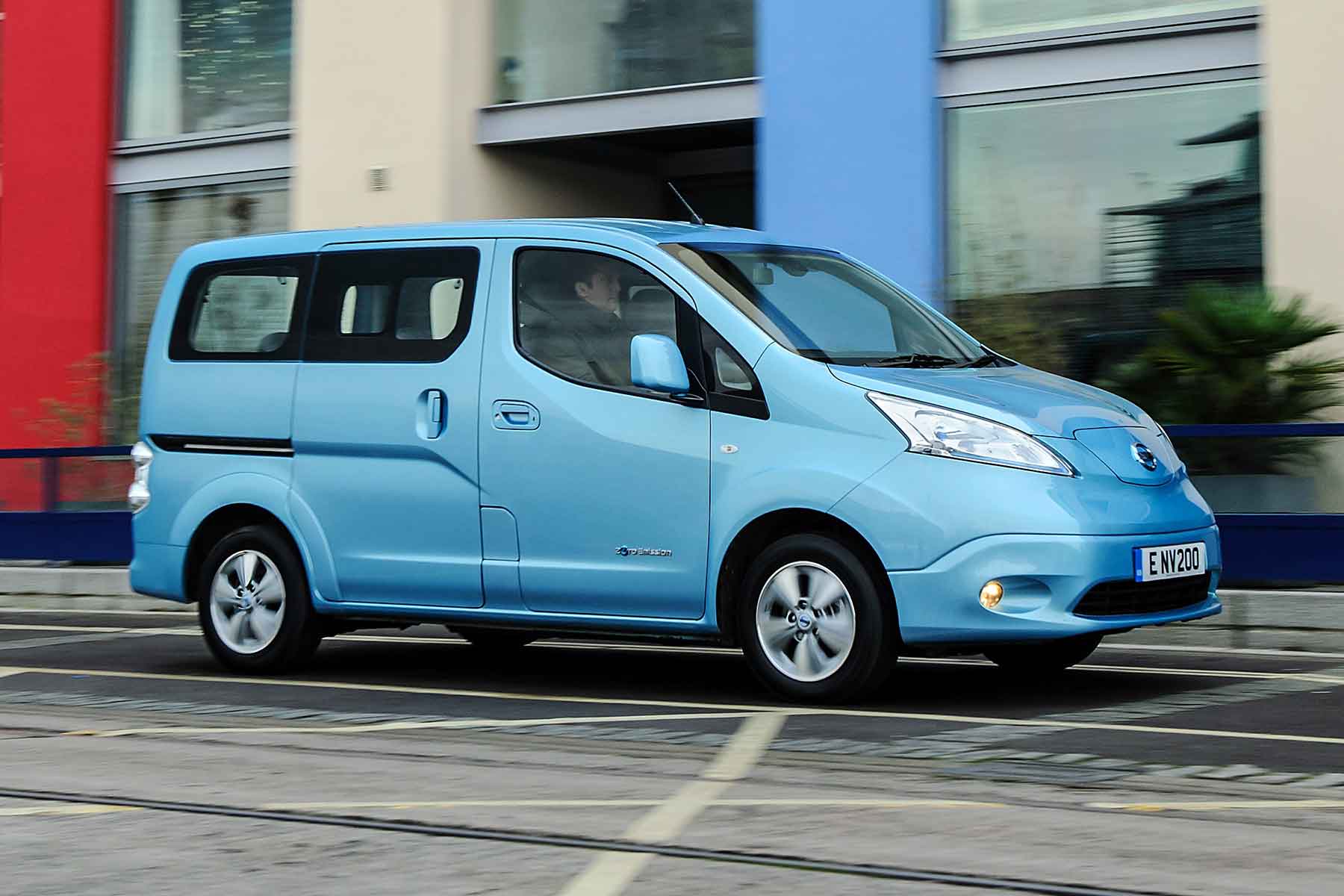 Ignore the fact it looks like a van, and that it even comes in van form. Nissan wants you to think of the e-NV200 Combi as an electric-powered people carrier. An ‘EVMPV’, if you will. With sliding rear doors, and seating for up to seven, it’s certainly one of the more practical ways to experience battery propulsion. The 0-62mph dash takes 14 seconds and top speed is just 76mph, but we doubt this is high on the list of priorities for any buyer – unlike the £30,480 list price. 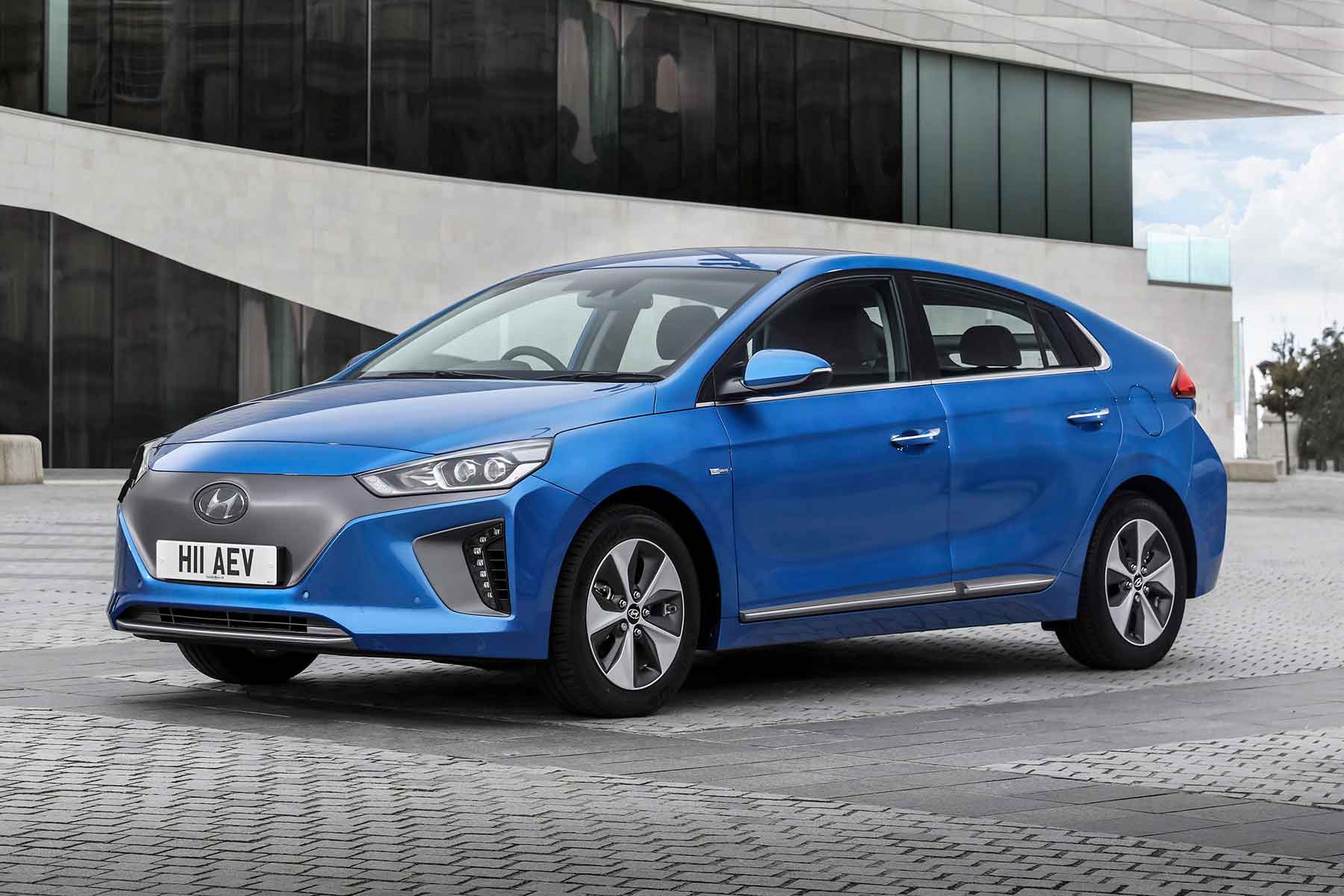 The Ioniq isn’t just one model. No, Hyundai has taken the path of building three versions of the same car: hybrid, plug-in hybrid, and battery EV. With an 88kW (120hp) motor, the Ioniq is one of the few lower-end models with a top speed exceeding 100mph – admittedly by just 3mph. It also features a Sport Mode, which drops the 0-62mph time to 9.9 seconds when engaged. Keenly priced at £25,745, the Ioniq shows the benefits of designing an EV from the ground up, rather than converting a conventionally-powered model. 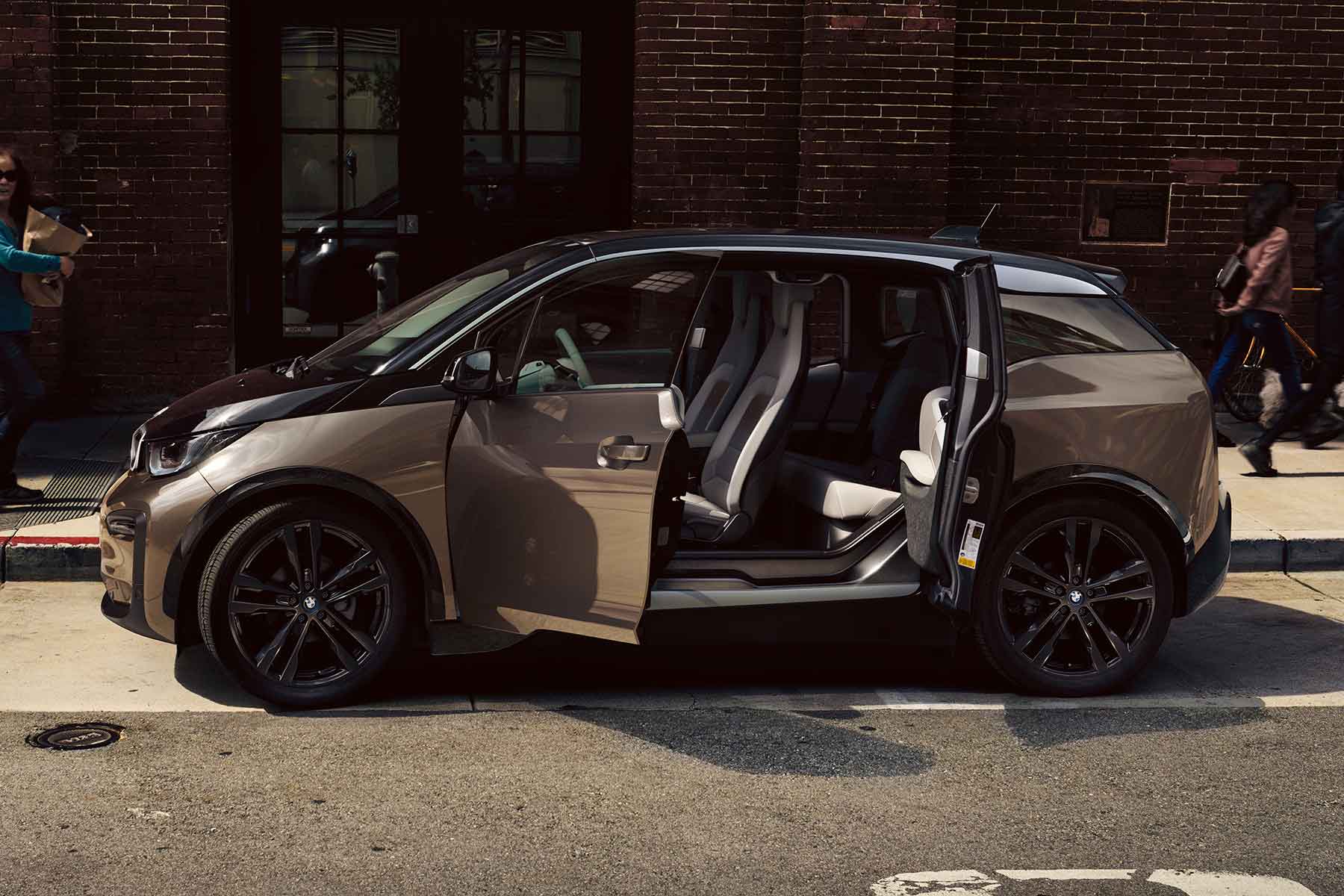 If you want a motorsport-style carbon-fibre chassis, rear-wheel-drive and 19-inch alloy wheels, an electric car might not be your first choice. But those features are exactly what the BMW i3 offers, along with an NEDC range of 225 miles with the recently revised 42kWh battery pack. You’ll also get 0-62mph in 7.3 seconds, funky ‘suicide’ rear doors and the benefit of a premium badge. Prices for the updated model haven’t been confirmed yet, but the starting list price for the 33kwh car was £27,880. 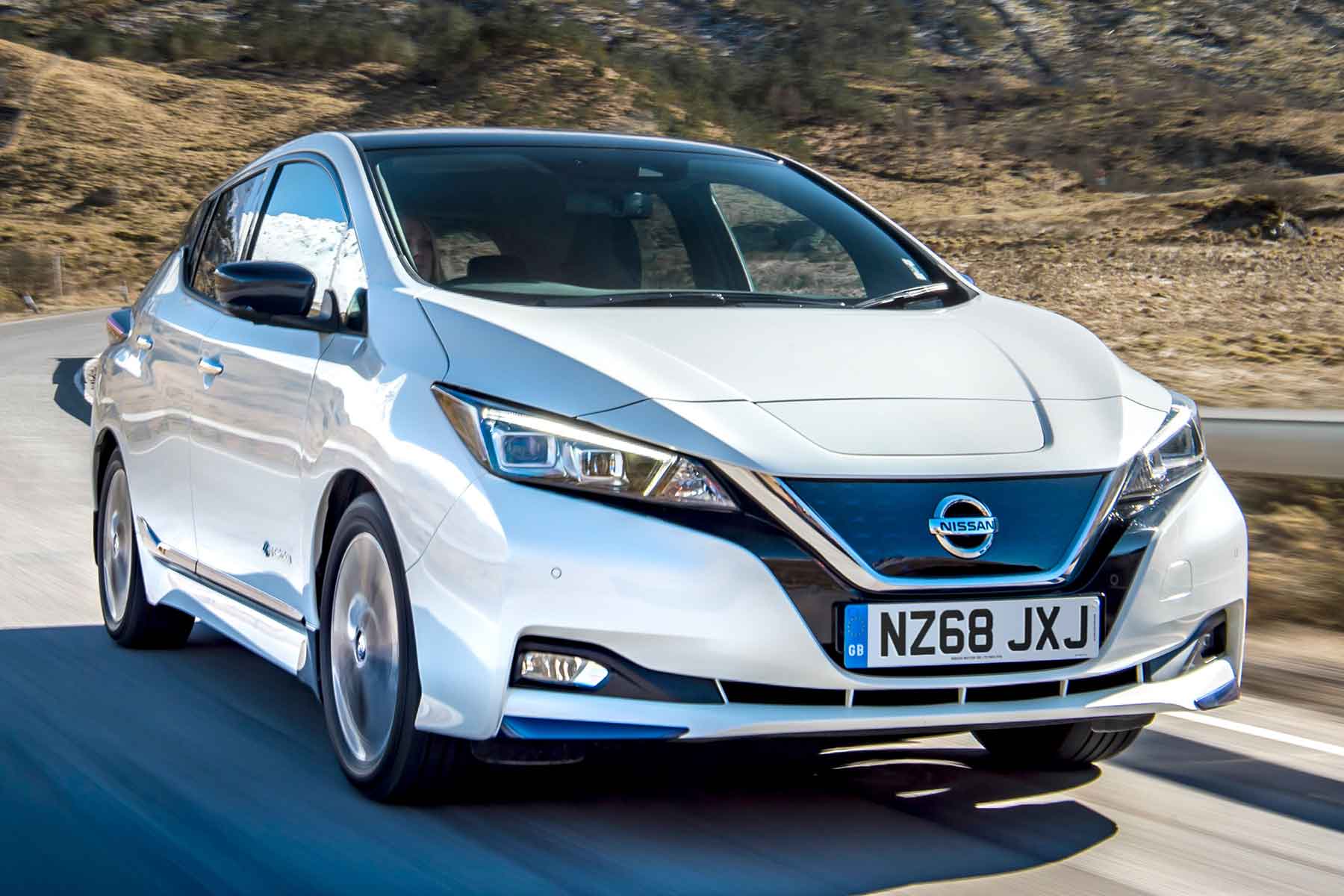 From £25,190, you now get an NEDC range of 235 miles in the new 2018 Leaf. The updated looks are less apologetic, the cabin is much more attractive and the real world range of 150 miles is workable. The second-generation Leaf is a major step on indeed. The e-Pedal makes driving easier than ever, too, with regenerative deceleration calibrated such that normal braking is just a matter of lifting off. What’s more, a 60kWh version with even more range should be here soon. 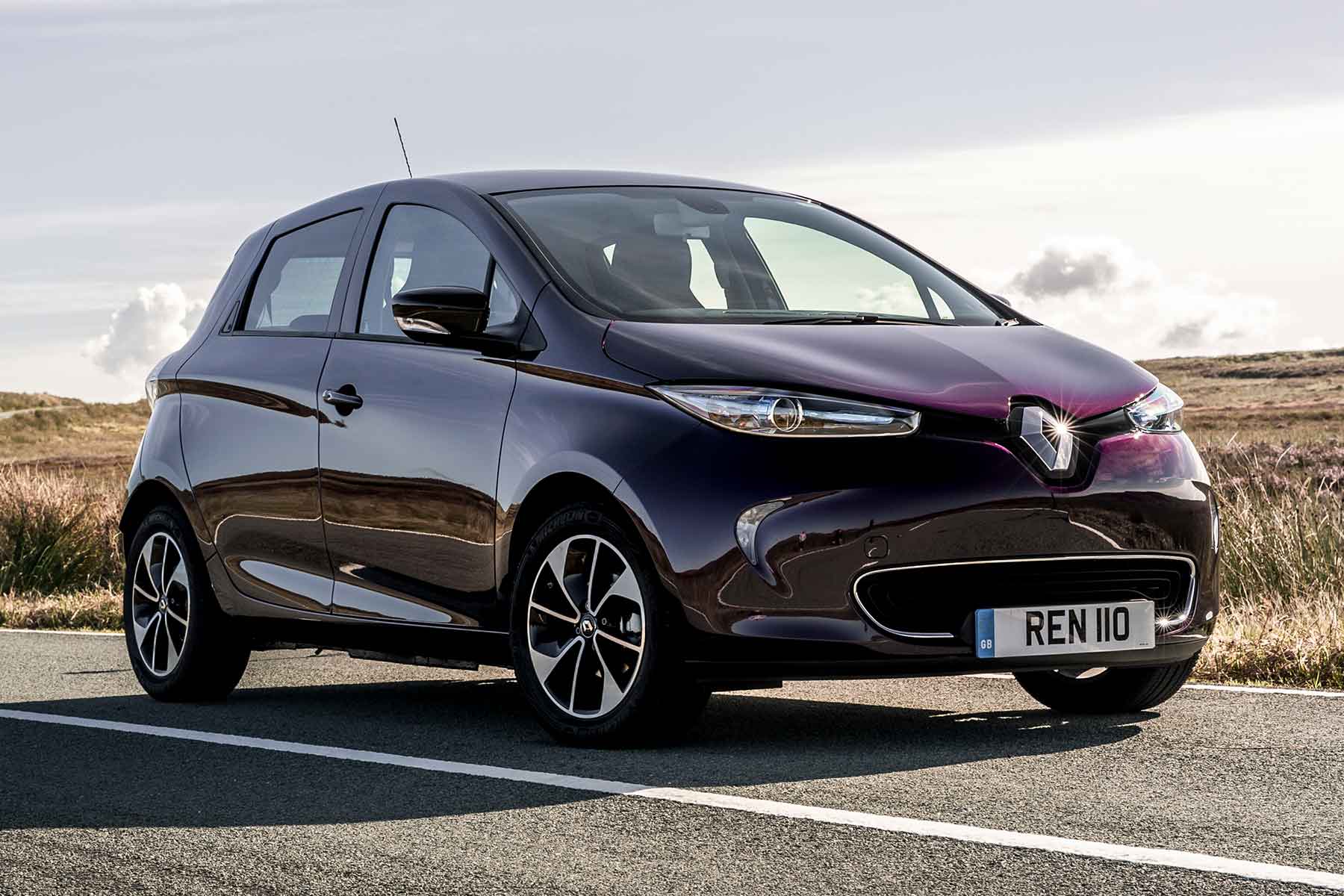 Fitted with the larger ZE 40 battery and now available with the new R110 motor, the Zoe can be charged from 0-80 percent in just 65 minutes via an appropriate charging station and will cover an NEDC-equivalent 250 miles – real world, that’s around 180 miles. The old Q90 motor is still available, although overall range is compromised slightly. The main question is whether you rent or buy the batteries. The former leaves a starting price of £18,420, the latter more than £24,000. 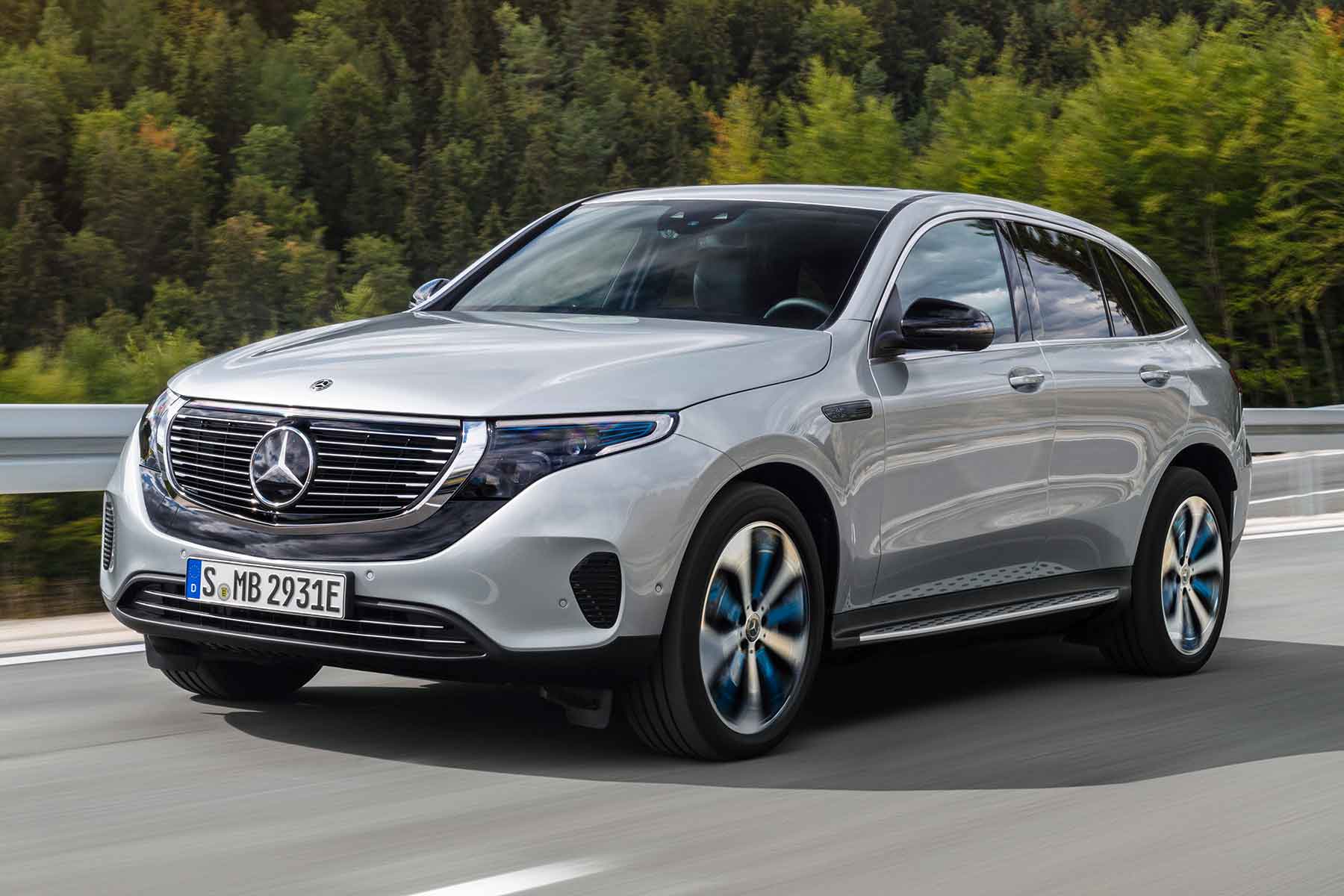 Beating the Audi E-tron to the punch was the EQC crossover SUV from Mercedes-Benz. Packing a comparatively small 80kWh battery, on balance, the EQC’s 280-ish NEDC equivalent range is impressive. While not using all of its 400hp, you can expect around 250 miles of real-world driving. Price-wise it shouldn’t be too far north of £60,000 when it arrives in 2019. Expect a veritable tidal wave of EQ-branded electric models from Mercedes going forward. 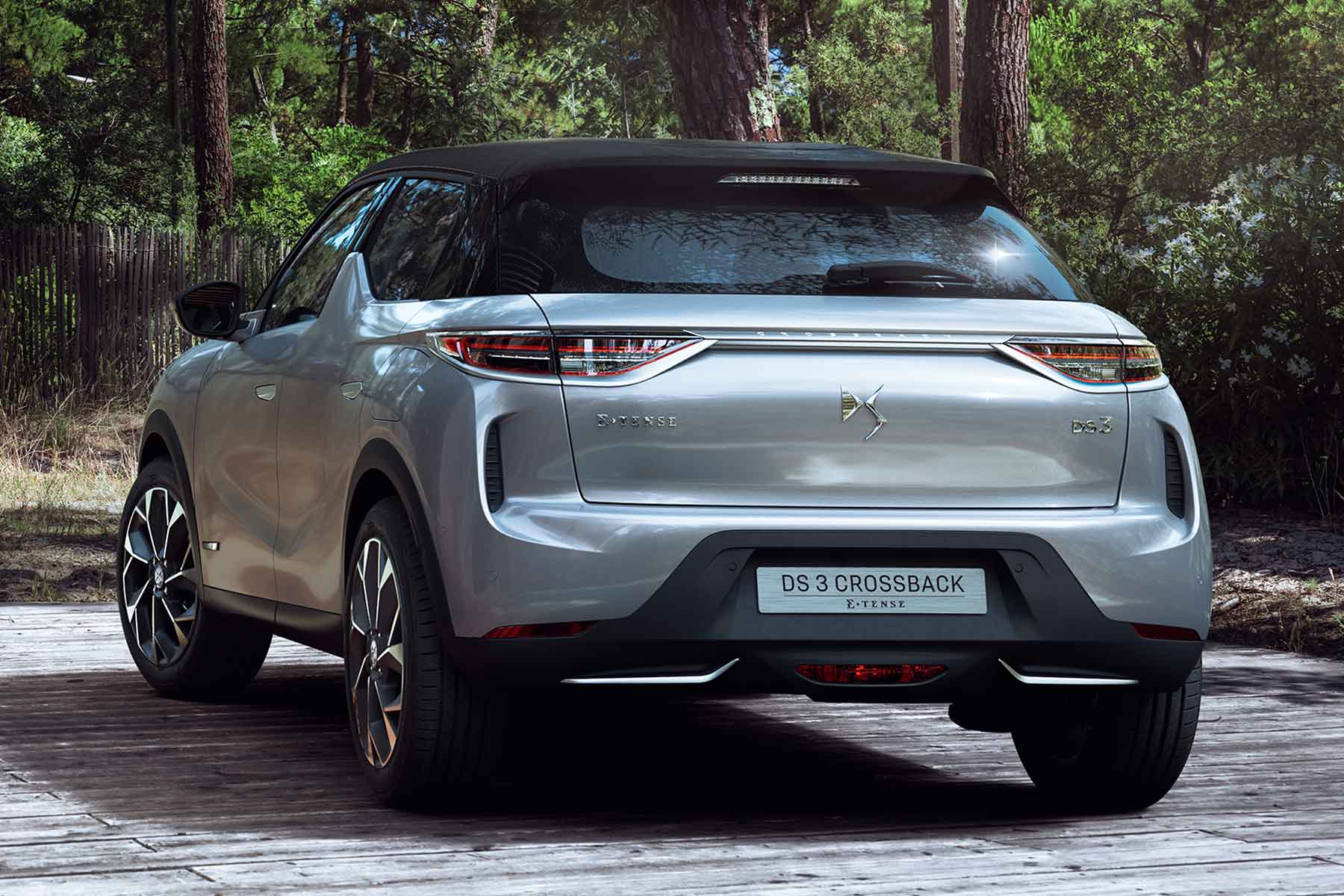 Fresh from its Paris Motor Show debut is the DS 3 Crossback E-Tense. It’s the car that suggests an EV variant should be the norm. It packs a 50kWh battery and is good for an NEDC-rated 280-mile range. Not bad, but not quite up there with certain Korean rivals. It’s got French style on its side, though. No prices just yet, athough it shouldn’t cost much more than the Hyundai/Kia dream team… 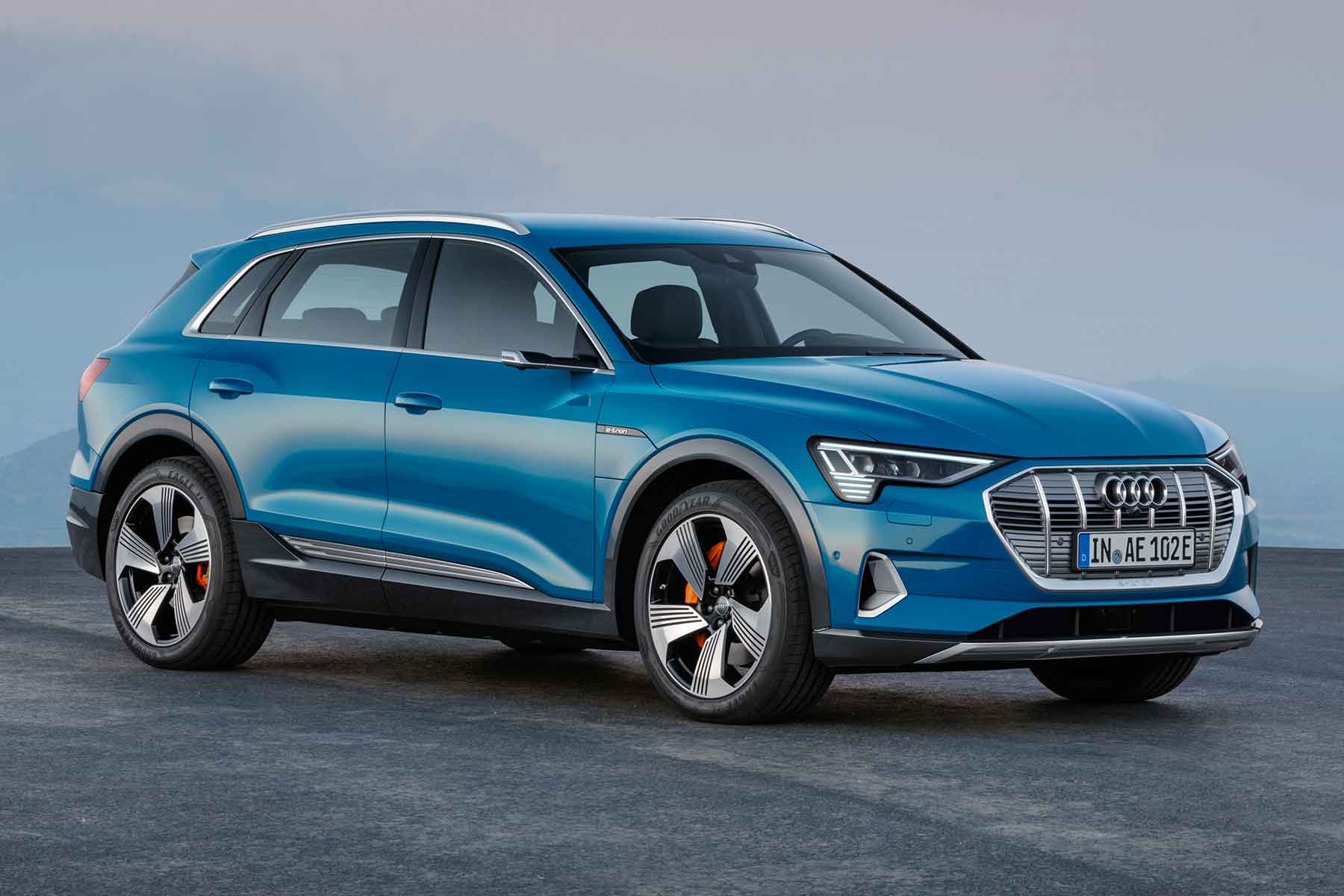 The freshly-revealed Audi E-Tron is a relatively late entry to the EV market for a marque that’s been so publicly curious about electric power over the last decade. Still, better late than never. The E-tron looks promising to say the least. An official NEDC number hasn’t actually been quoted, but based on Audi’s 250-280-mile post-homologation estimates, that could reasonably see it past an NEDC-rated 300 miles. As well as that, you get up to 400hp and cameras instead of wing mirrors for your £71,000 or so. It marks the start of a 12-car Audi EV onslaught. 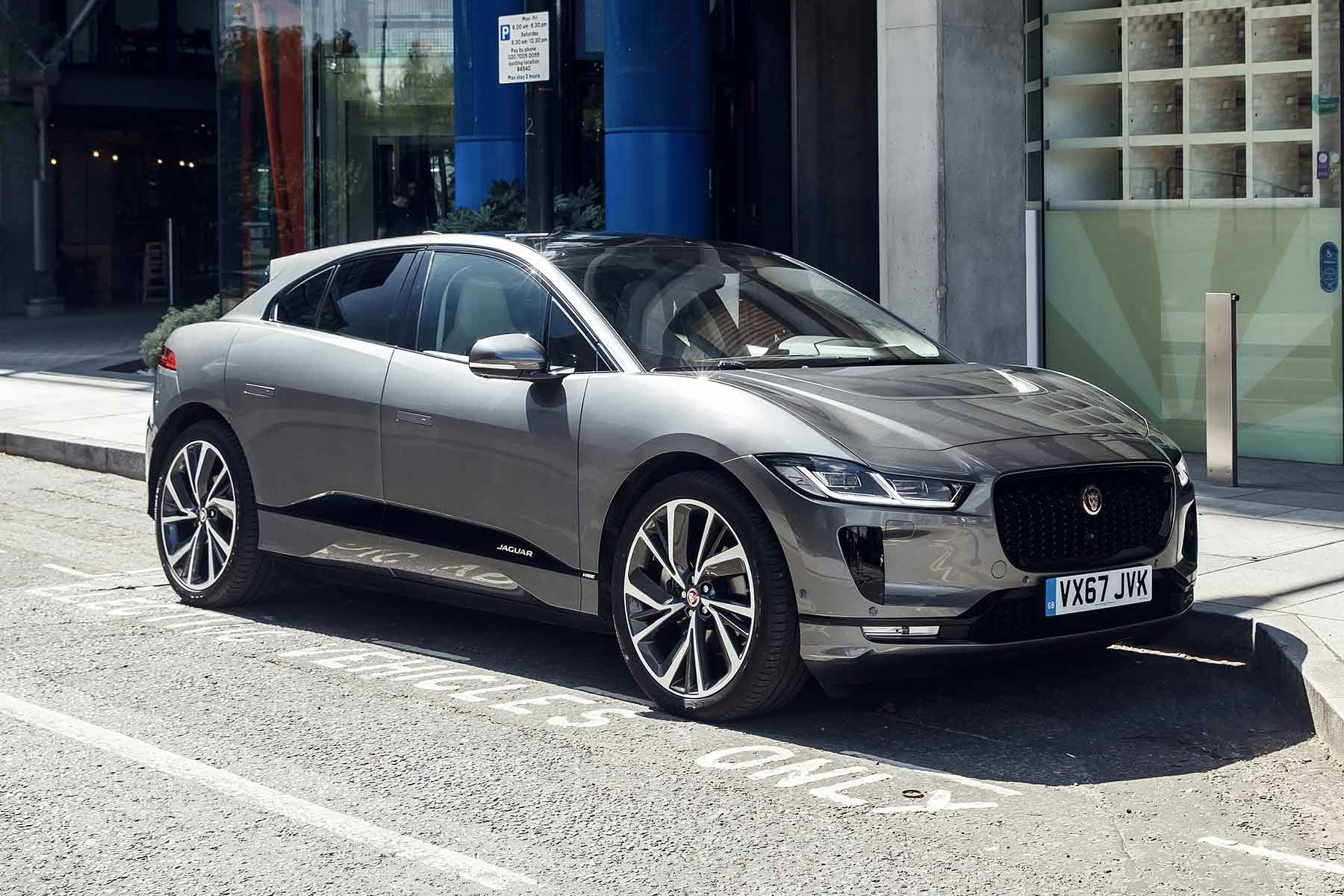 The Jaguar I-Pace has the Germans licked for now. Not only has it got to market months earlier, it also offers what seems to be superior range. While Audi and Mercedes are talking about between 250 and 280 miles of homologated range, Jag was there months ago with 280+ real-world miles or 336 miles on the NEDC cycle. Couple that with 400hp and startling looks to make the relatively humdrum Germans fade into the background and you’ve got a leader in this fledgling £60,000-£80,000 premium EV segment. 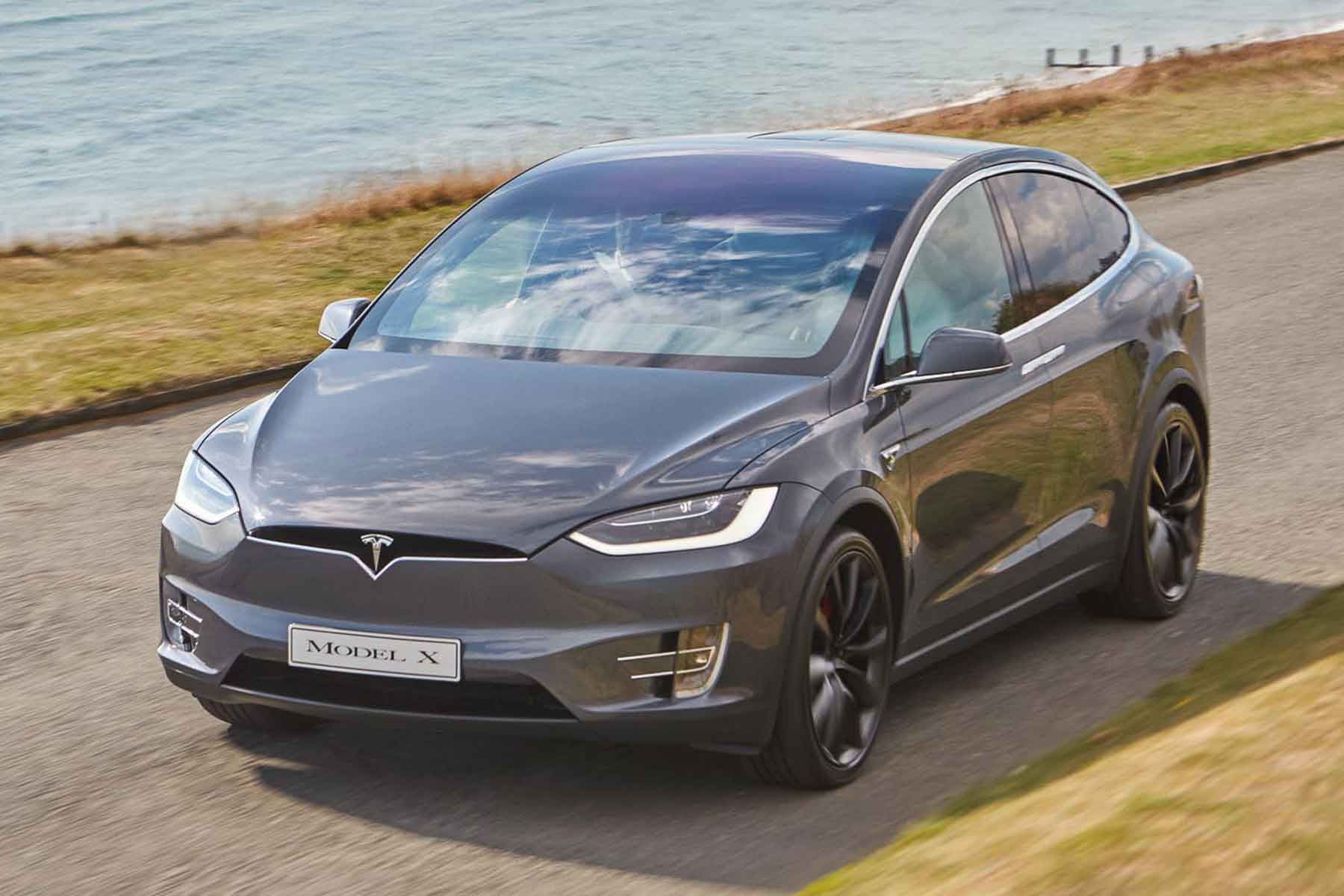 There are of course many variants in the Tesla range. The 90D Model X will get you 303 miles of NEDC driving. If you really need to make six passengers vomit profusely, but with the guilt-free feeling of using electric power, the Model X P100D is what you need. The ‘P’ stands for performance, and means a 100kWh battery pack mated to uprated electric motors. The result is a range of 336 miles, but a 0-60mph time of 2.9 seconds is the bigger party-trick for this £129,200 SUV. 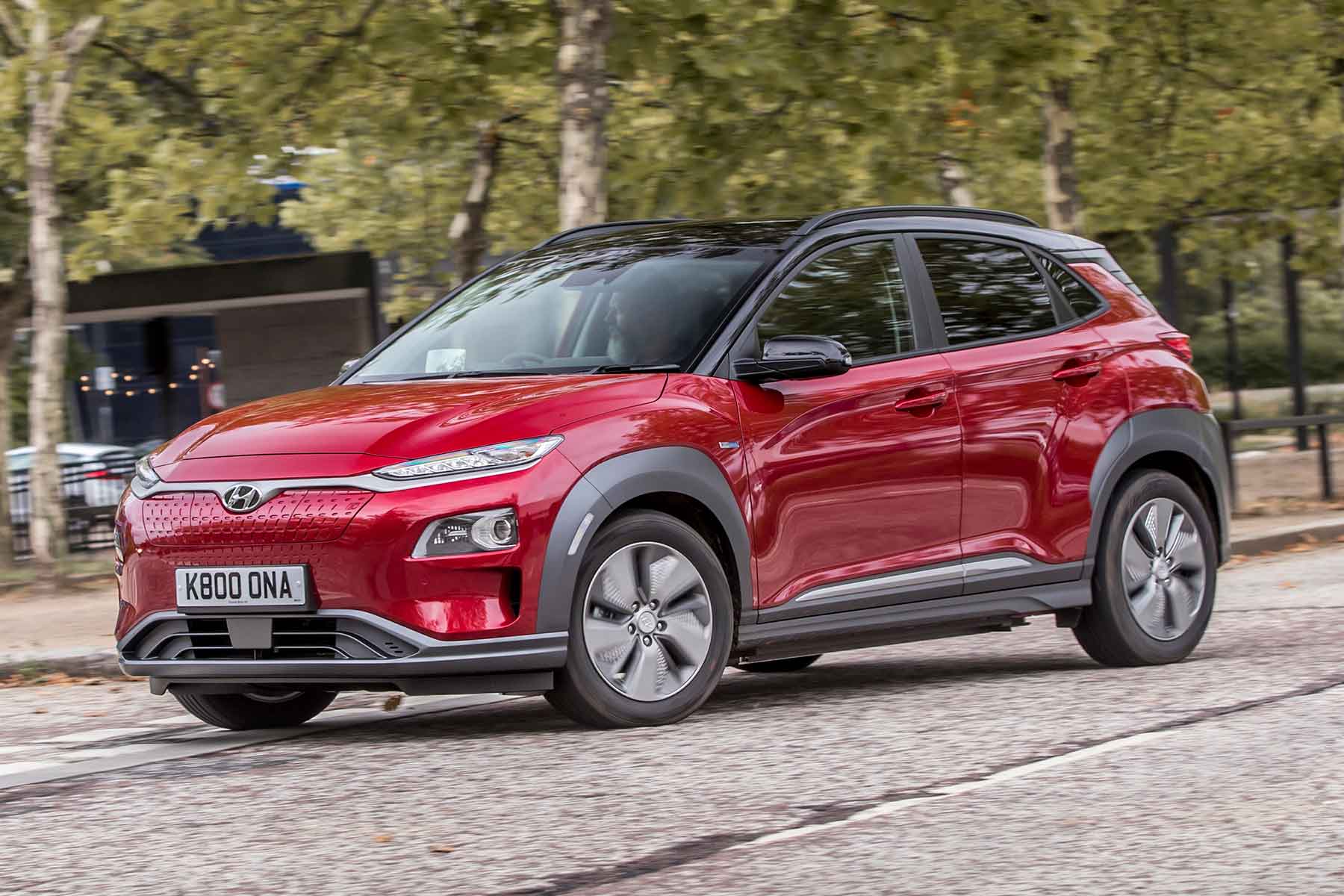 Devoid of I-Pace levels of fanfare, Tesla levels of hype or E-tron levels of teasing, comes the humble circa-£30,000 Hyundai Kona Electric 64kWh. It’s a silent revolution, obviously in terms of the powertrain but also in terms of fuss. It’s delivering premium EV range for half the price. You aren’t getting better range-per-pound anywhere else. There’s also a 40kWh model that manages an NEDC-rated 214 miles for around £5,000 less. 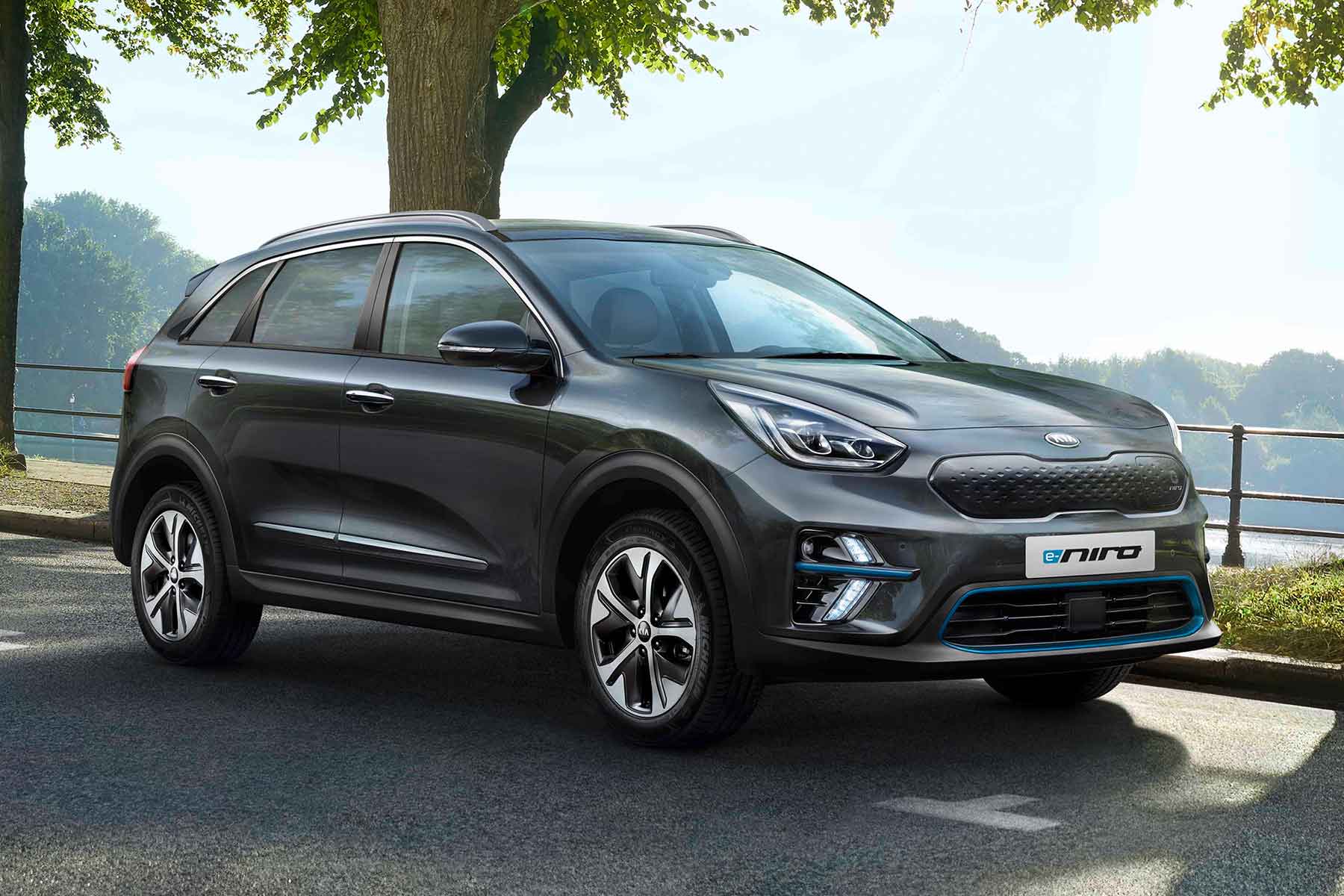 Borrowing much from its Hyundai Kona Electric sister car, the Kia e-Niro is just as impressive. A circa-£30,000 price point when the 64kWh model arrives seems tall for a Kia. However, as with the Hyundai, it’s I-Pace-beating range for half the price. If you value substance over style, these Korean EV twins rule the world right now. 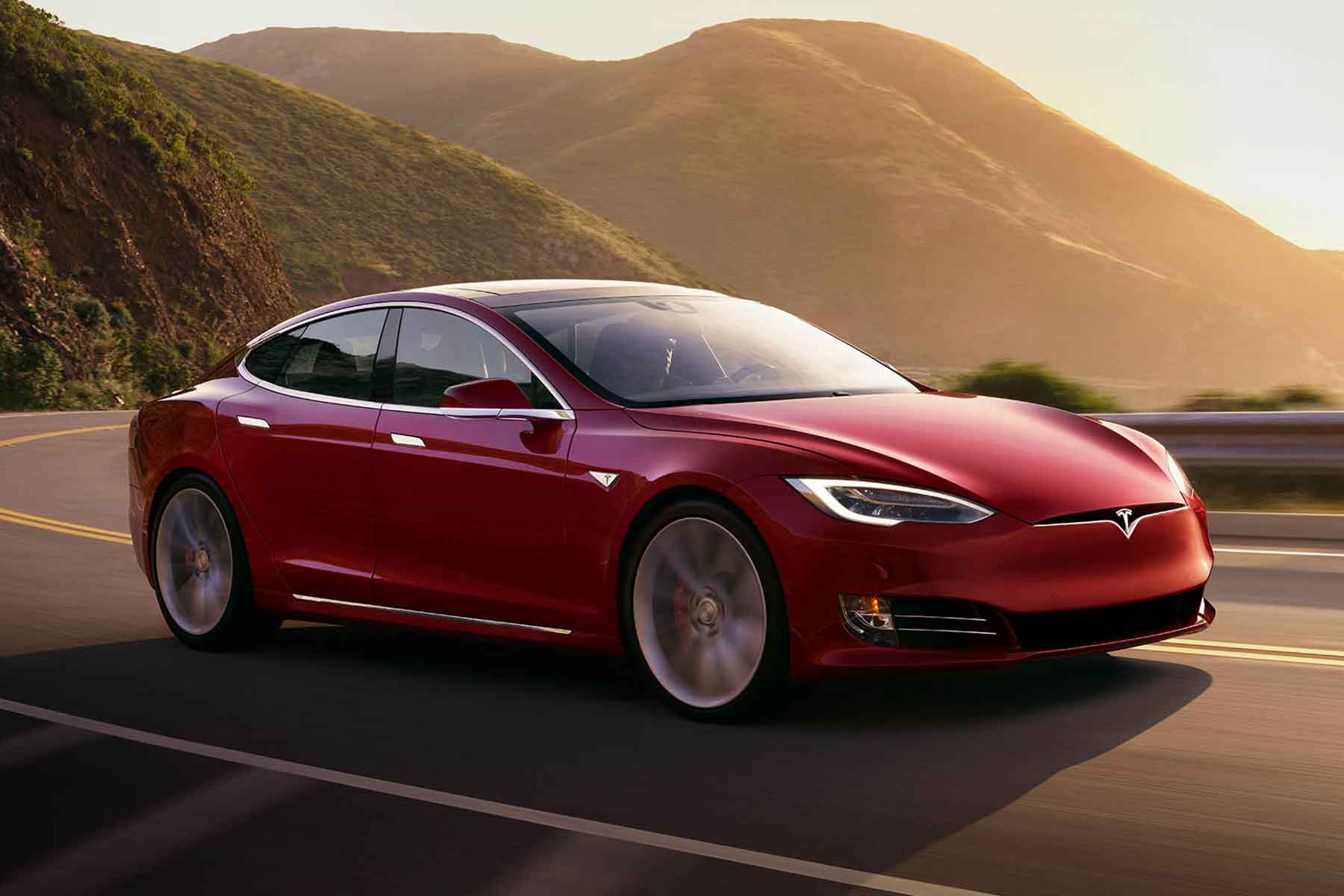 Forgo the need to get ‘Ludicrous’ with your Model S and you can save £41,900 – and gain an additional 12 miles in NEDC range. The long-distance EV still achieves supercar-rivalling performance and, at present, offers the furthest you can go in an EV on a single charge. As with all the cars featured here, remember the NEDC range is purely for comparison purposes. Real-world figures will vary due to weather, driving style, and traffic conditions.