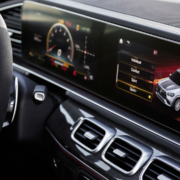 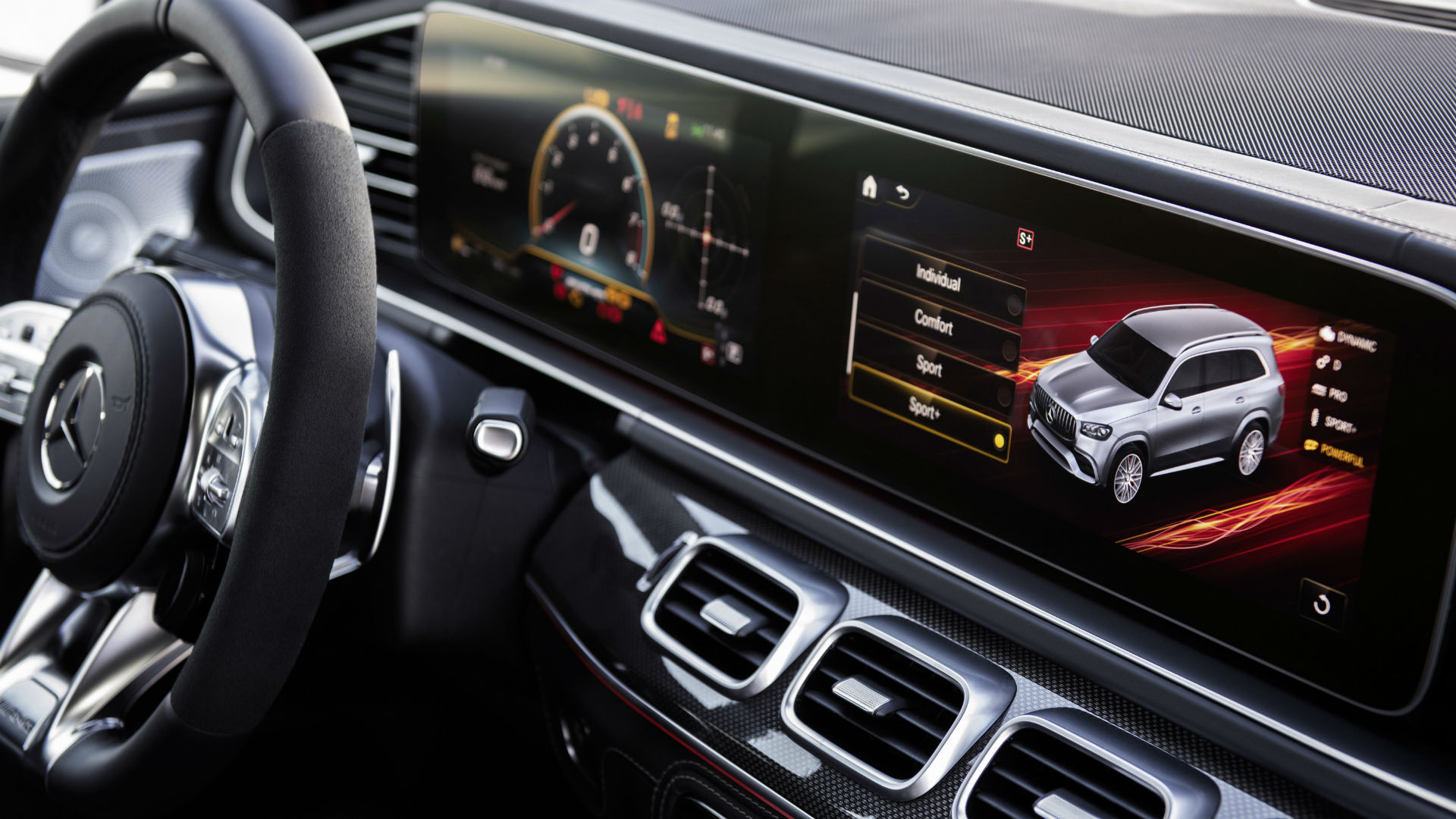 Nobody could accuse Mercedes-Benz of standing still. Ever since Karl Benz presented the Patent Motor Car in 1886, the company has consistently pushed boundaries.

Indeed, Mercedes-Benz has registered more than 80,000 patents to date.

Examples of its innovation include the electronically controlled anti-lock braking system (ABS) in 1978, an automatically extending rollover bar in 1989, and electronic stability control (ESP) in 1995.

In a kind of end-of-year Christmas ‘best of’ round-up, Mercedes-Benz is showcasing 10 new technologies it has introduced for the 2020 model year. 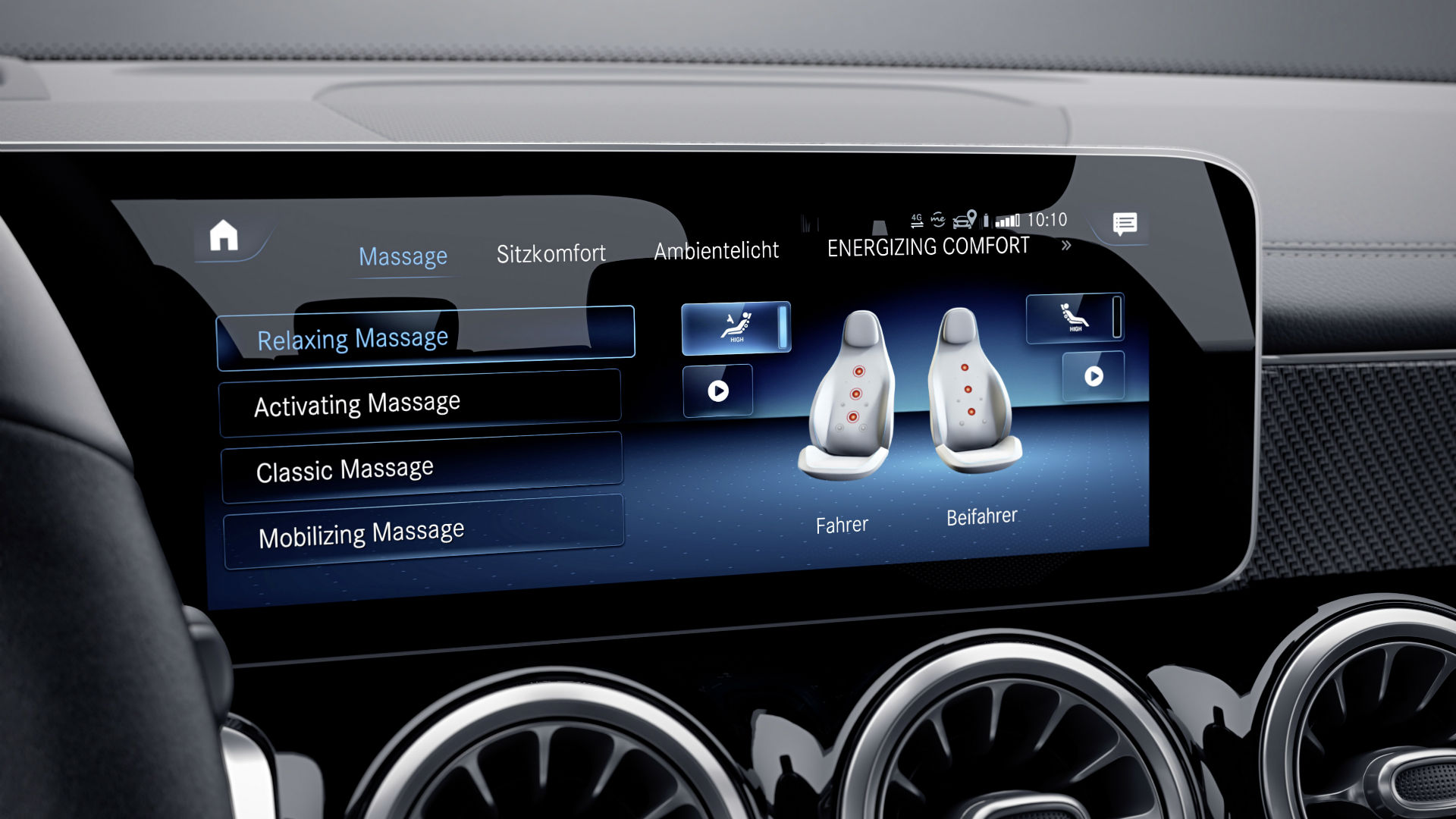 A camera in the overhead console monitors movements of the driver’s and front passenger’s hands and arms. When a hand approaches the touchscreen or touchpad, the media display changes and individual elements are highlighted. The system also includes gesture control.

Works in combination with the air suspension  to counteract body roll, pitch and squat. The spring and damping forces can be individually controlled at each wheel.

In simple terms, this system prepares the car for the car wash by adjusting the suspension to the highest position, folding the exterior mirrors, closing the windows, suppressing the rain-sensor and switching the air conditioning to air-recirculation mode. It will be standard on the next-generation GLS.

The system can vary torque distribution between the front and rear axle from zero to 100 percent to improve handling and traction. The system is premiering on the GLE.

The twin-turbocharged V8 in the GLE 580 and GLS 580 features a 48-volt on-board electrical system and an integrated starter motor. This increases the performance and efficiency while eliminating the need for a belt drive for ancillary components.

The system recognises traffic jams at an earlier state, supporting the stop-start system at speeds of up to 37mph.

The system intervenes if it detects a collision with oncoming traffic when making a turn.

New models fitted with Blind Spot Assist will boast a Vehicle Exit Warning Function. It monitors the blind spot when the vehicle is parked and will warn the driver of the presence of approaching vehicles, motorcyclists and cyclists.

If a compatible Garmin wearable device is worn by the driver, the car can measure stress levels or quality of sleep. It acts as a comfort guide for drivers.

To find your next new Mercedes-Benz, check out our car reviews section. 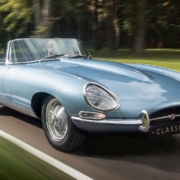 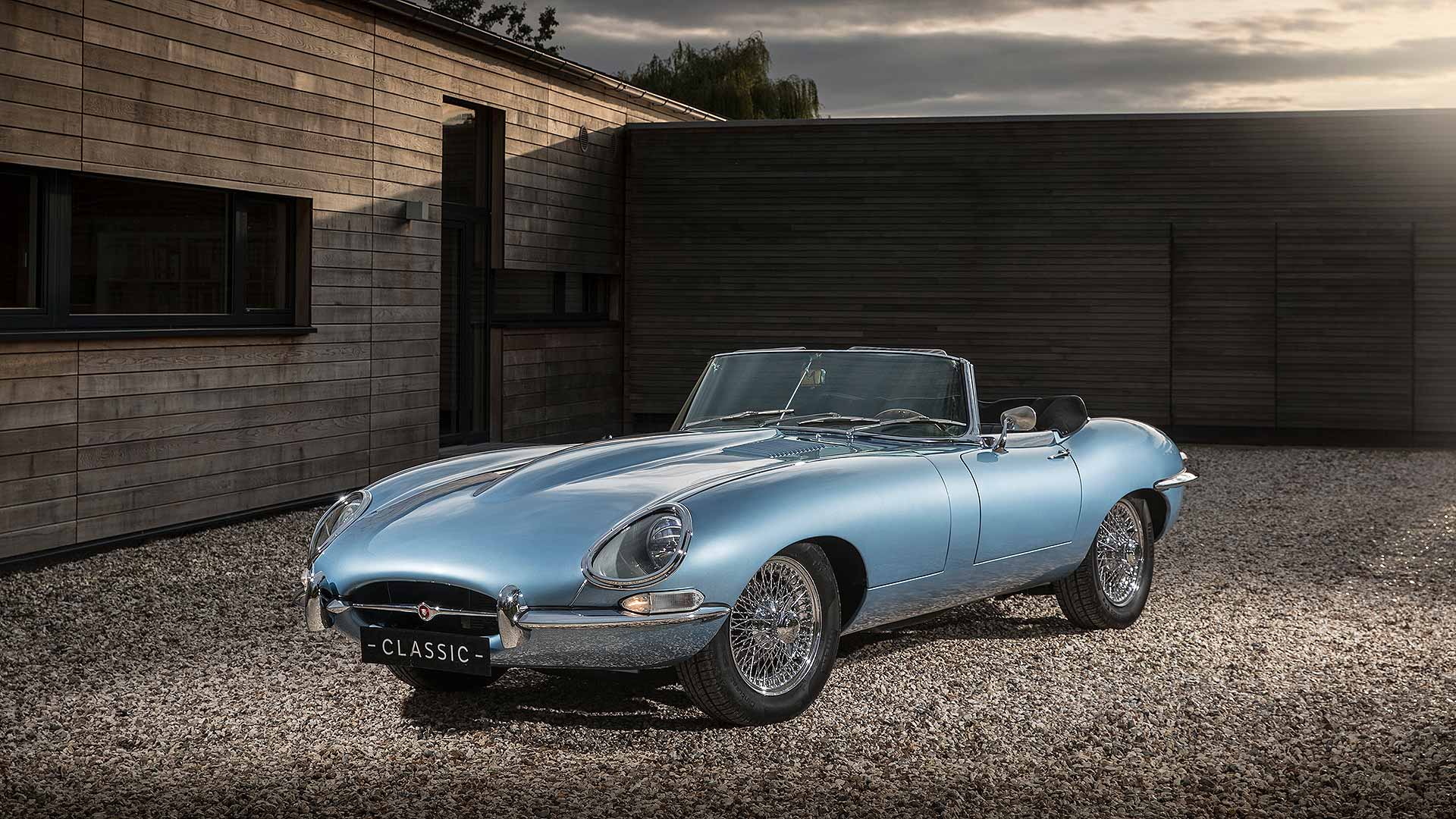 Jaguar has reportedly paused plans to introduce an all-electric version of the classic E-type.

The E-type Zero was first shown in September 2017, and plans to put it into production were confirmed in August 2018.

Jaguar is now putting the project on hold after what The Sunday Telegraph calls a “reappraisal”.

The firm said launching the E-type Zero is “not a priority in the current global commercial climate”.

Deliveries of the £350,000 car were originally scheduled to begin in summer 2020. Jaguar started taking expressions of interest in summer 2018, and even set up a dedicated email address for potential buyers: zero@jaguarlandrover.com.

Owners who expressed interest have now been contacted: “It is with regret that I inform you that we have taken a difficult decision to pause the development of the production vehicle for the time being.” 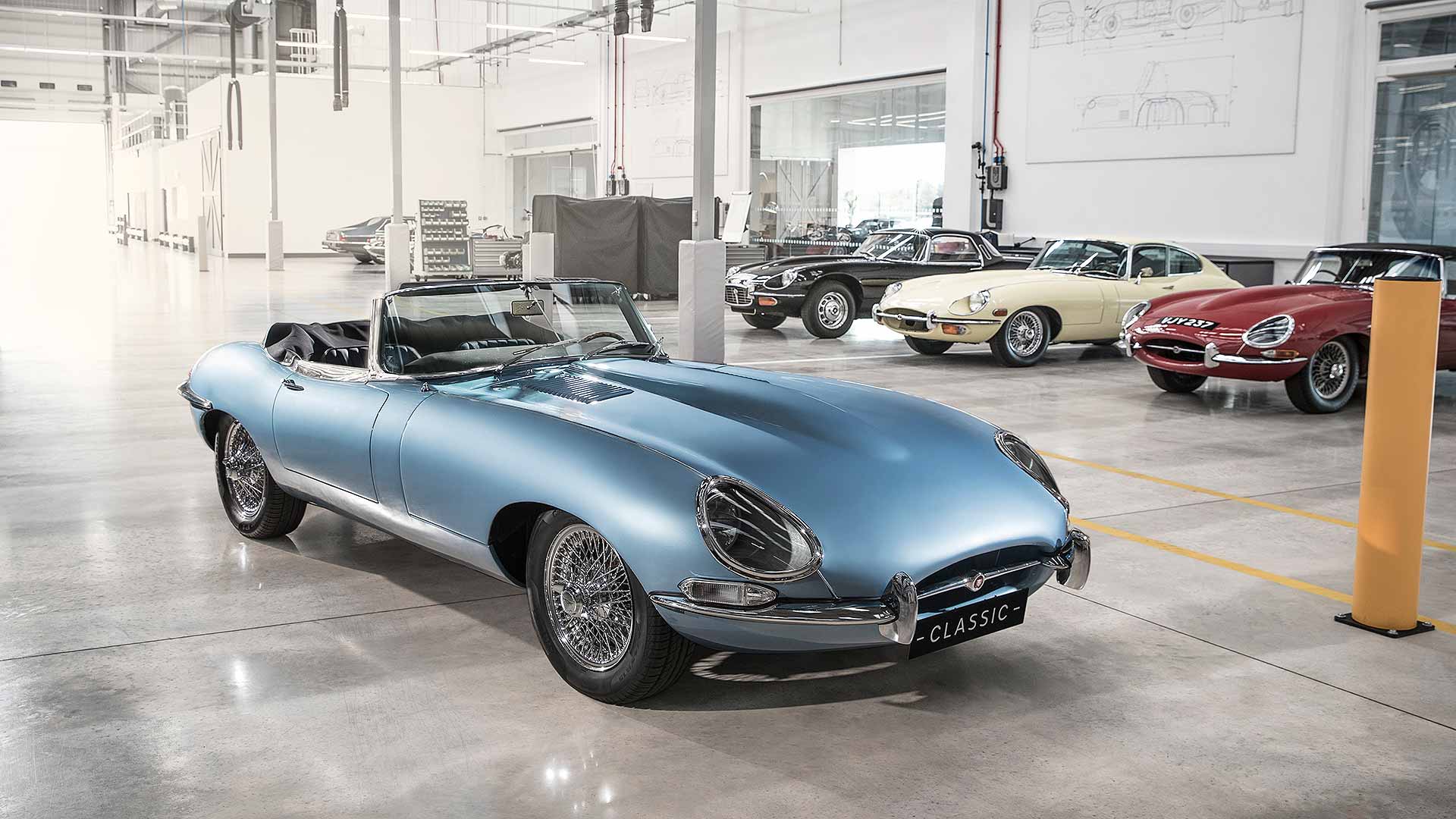 The car was famously used by the Duke of Sussex to drive the Duchess to their wedding reception.

It also won the ‘Best use of electricity since the light bulb’ prize at the 2018 GQ Awards.

“Jaguar Classic will continue to monitor the external environment, the speed of EV development and demand from the customer base around the world,” added the firm in a statement.

The development of the E-type Zero’s EV technology is already, it admitted, in an “advanced” state. 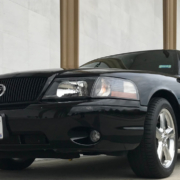 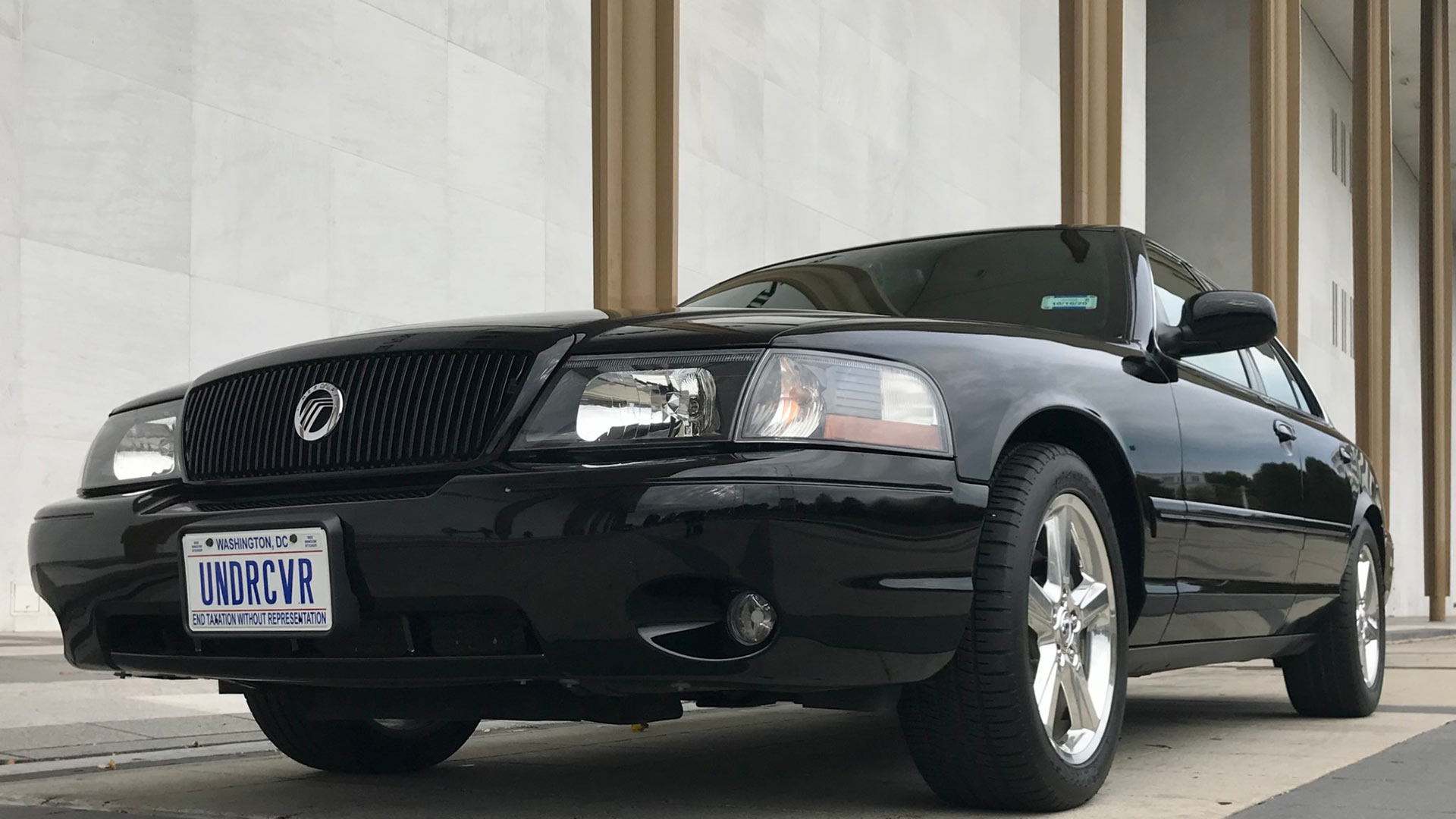 Black Edition cars and trucks are now common features of model ranges, but the 2003 Mercury Marauder remains one of the most celebrated examples.

Auction website Bring a Trailer currently has this example available for sale, and it represents a chance to grab some traditional body-on-frame construction.

Buying this V-8-powered rear-wheel drive sedan could be the perfect antidote if you are tired of SUVs and downsized engines. 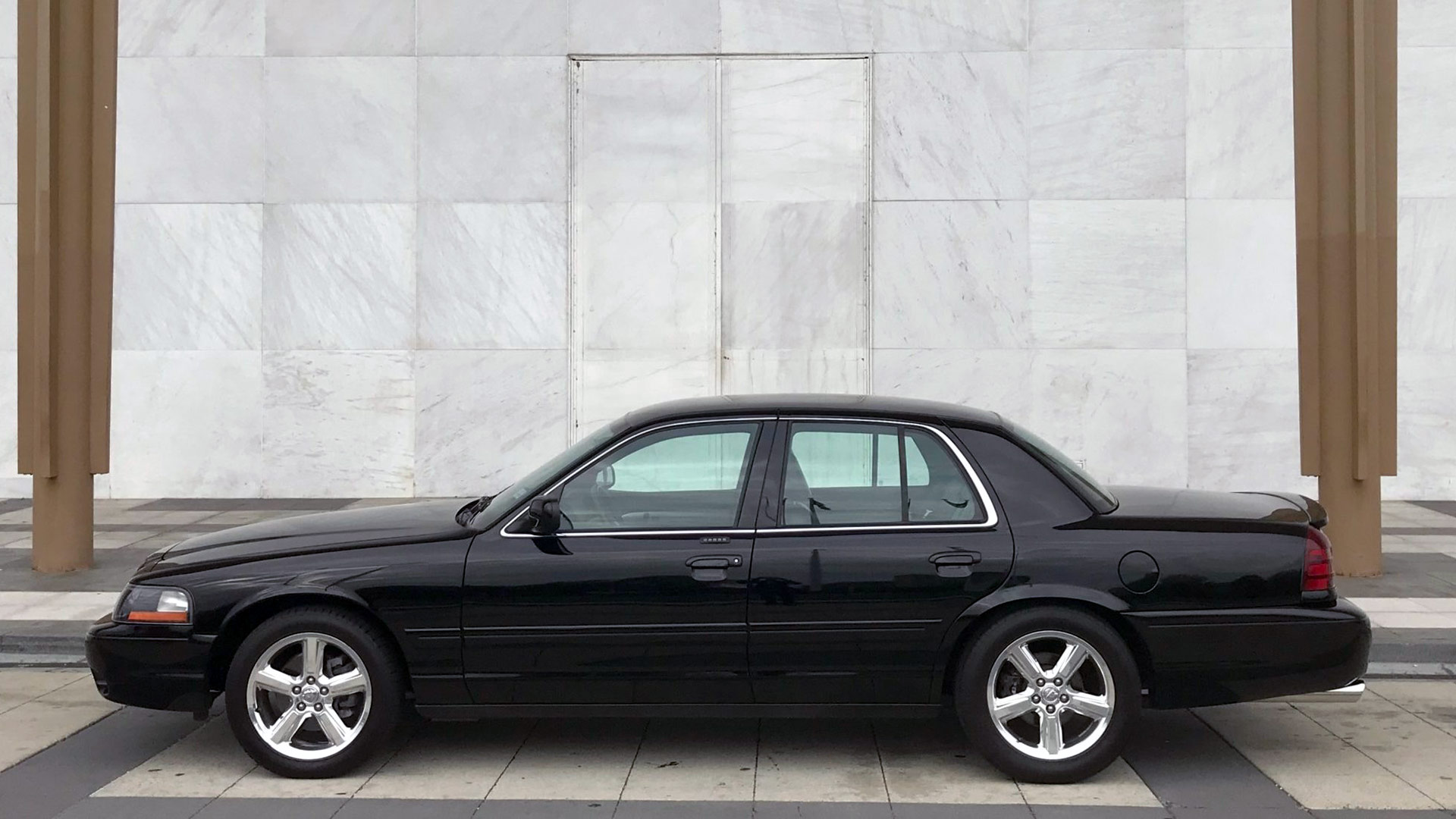 Introduced for the 2003 model year, the Marauder was intended as a performance version of the existing Mercury Grand Marquis sedan. Mercury had used the Marauder nameplate twice before, but wanted to attract younger buyers to the brand.

A concept version of the Marauder was shown at the 2002 Chicago Auto Show, albeit as a two-door convertible with a supercharged engine. The Marauder garnered enough positive attention for Mercury management to greenlight production plans, but for a sedan model.

It was also deemed that the finished Marauder would dispense with the supercharger. Instead, power came from the 4.6-liter Modular V-8 engine, producing 302 horsepower and 318 lb-ft of torque. 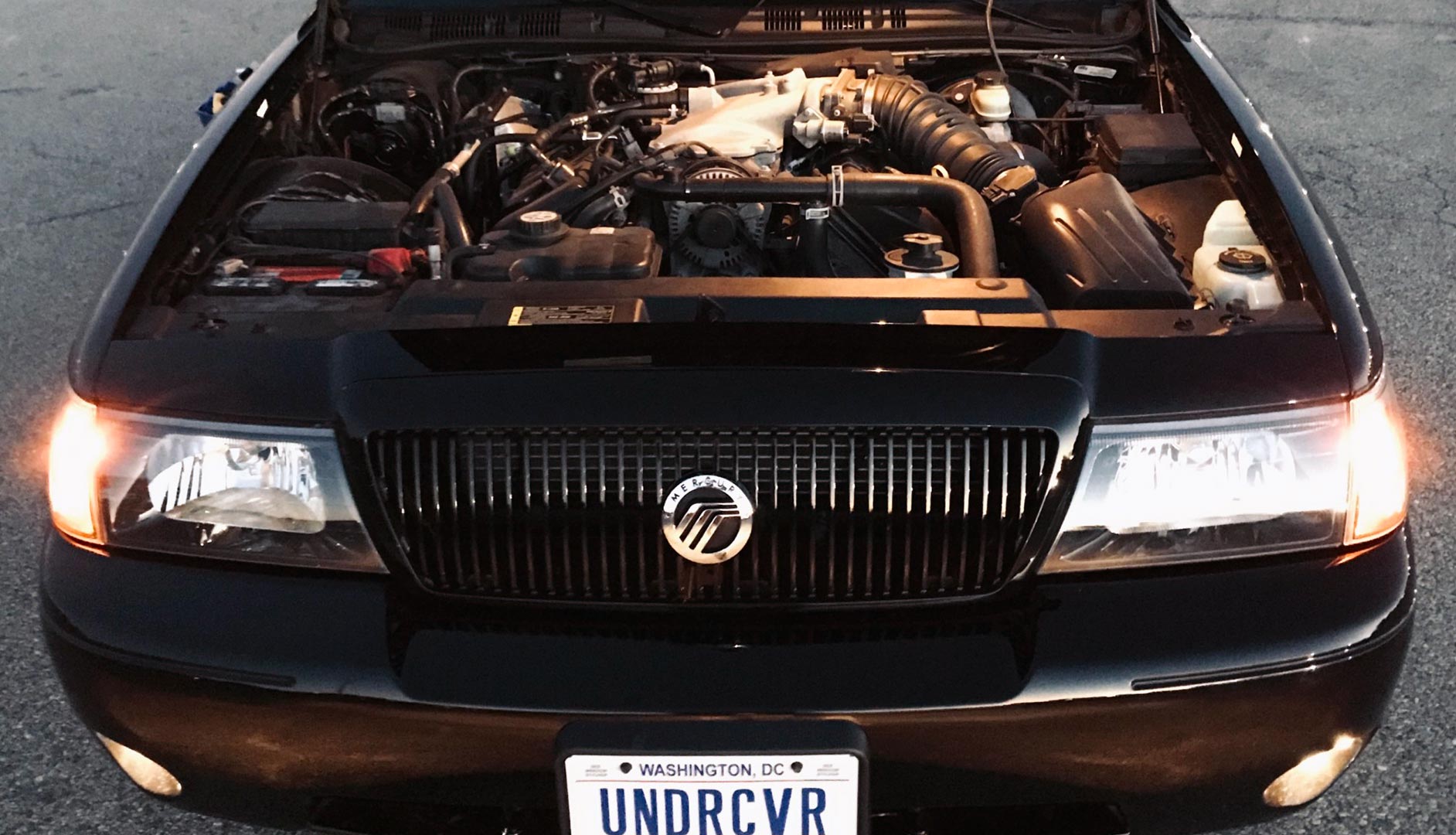 Good news came in the form of the Marauder benefitting from parts typically fitted to the infamous Police Interceptor version of the Ford Crown Victoria.

Heavy-duty suspension was added, along with uprated disc brakes, taken from the Police Interceptor. Also included was a four-speed automatic transmission, combined with a standard limited slip-differential and aluminum driveshaft.

The Marauder was also the recipient of a rack-and-pinion steering system, included as part of a number of upgrades applied to the Panther platform during 2003.

Dark and mysterious forces at work 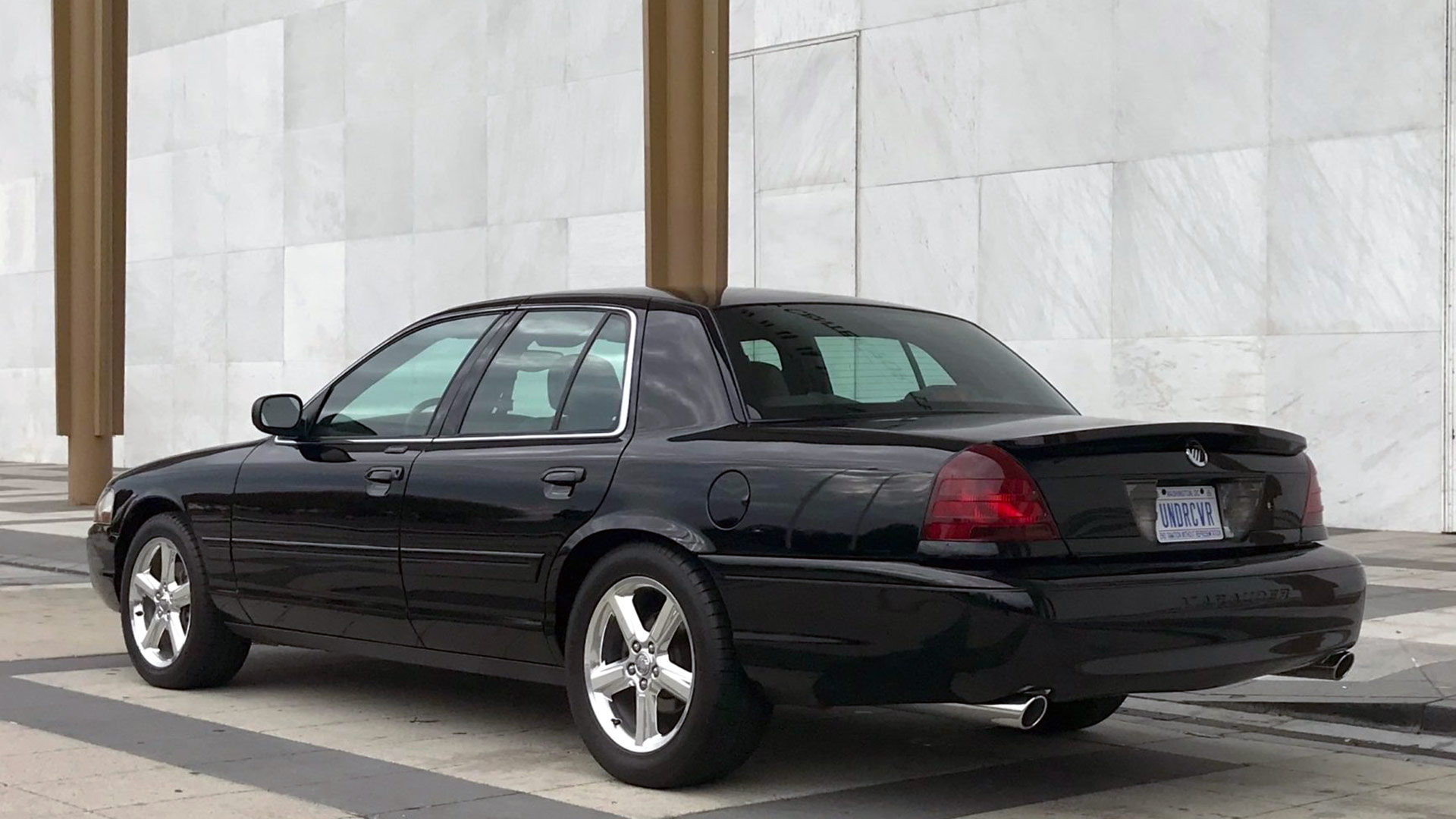 What makes the Marauder special are the efforts made on styling and appearance. Ditching the chrome brightwork of the Grand Marquis, the defining feature of this sporting model is the black grille with body-colored surround.

The makeover included bespoke bumpers front and rear, plus dark-tinted lights and the fitment of a subtle rear spoiler. More noticeable are the 18-inch five spoke finished in chrome, and wearing center caps inspired by the Mercury logo from the 1960s.

Mercury offered a choice of paint colors for the two years of Marauder production. However, the Black option on this particular car works best for the stealth look. The seller notes that this car has had some touch-up paint applied, along with suffering a small corrosion spot. 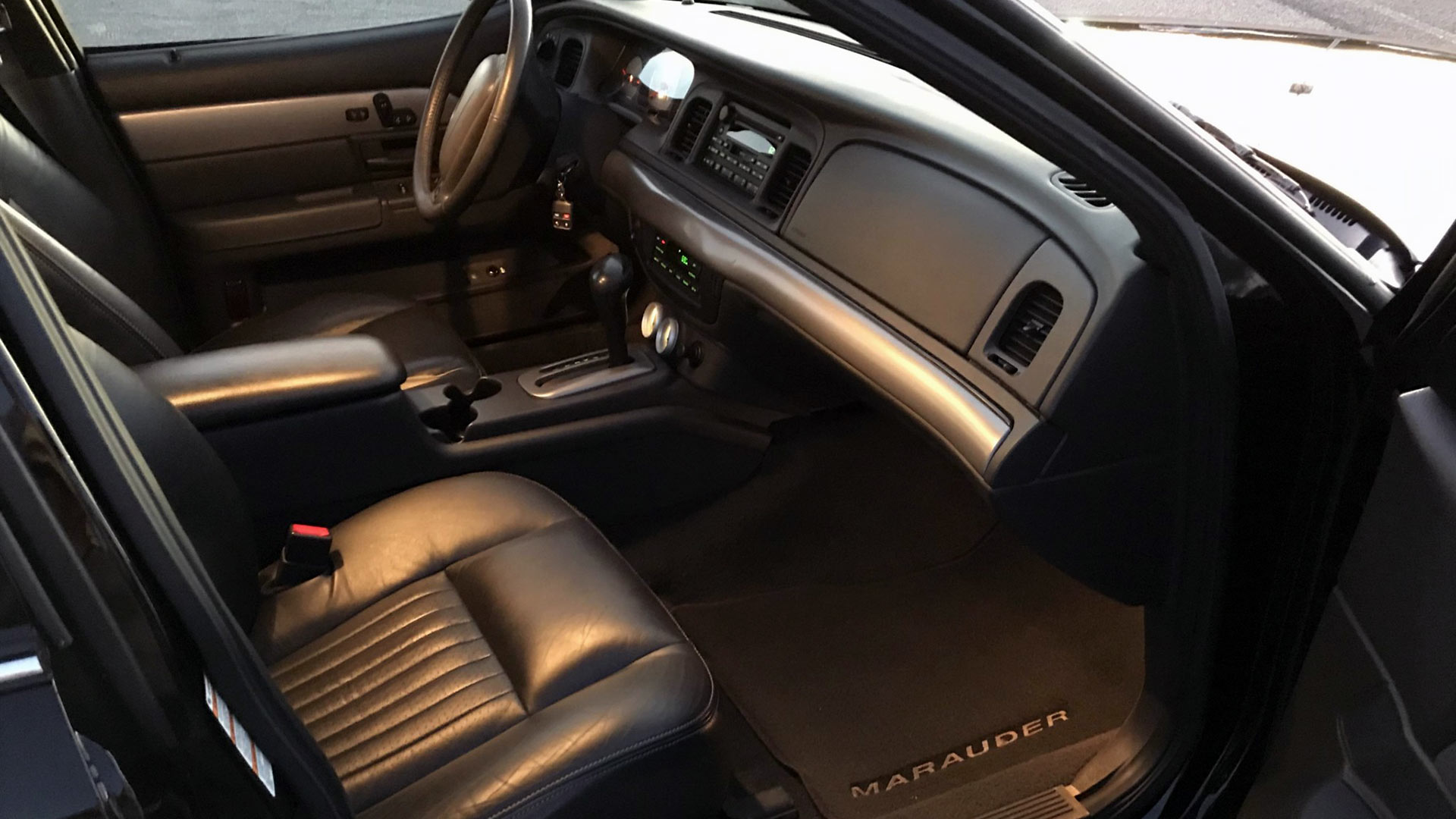 Interior changes for the Marauder were more limited, with the front bench ditched in favour of bucket seats. Black leather was used for the upholstery, with satin aluminum trim used throughout. A pair of extra gauges were also fitted in front of the gear shifter.

Marauder buyers also received a special commemorative leather jacket, which the owner of this car has kept. All the original sales literature is included, along with two keys, a car cover, and a full-size spare wheel.

Having covered 41,000-miles since new, this Marauder has lived a relatively charmed life. Recent repair work includes replacement oxygen sensors being fitted, along with a new cooling fan. 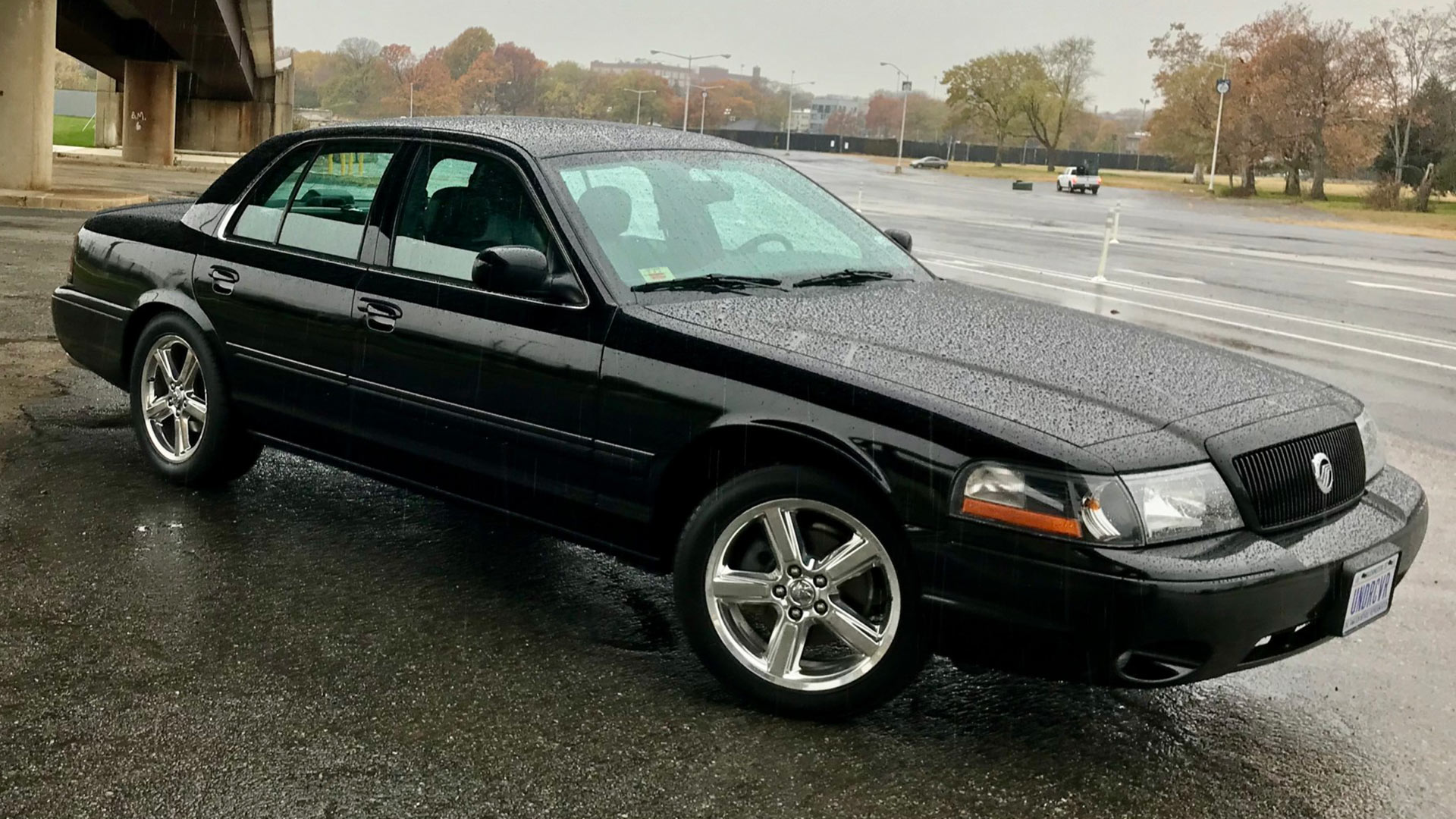 The Marauder fell short of sales expectations when new, with barely more than 11,000 produced between 2003 and 2004. The subsequent cancellation of it by Mercury has created a cult following that has only grown stronger with time.

Although it may not be the fastest sports sedan available, the Marauder is noted for impressive mid-range performance. It also offers the closest opportunity to experience a police-specification Ford Crown Victoria without buying an ex-service vehicle.

Bidding on this Marauder closes on Monday December 4th, with Bring a Trailer users already intrigued by this classic sedan.