Volkswagen board member Juergen Stackmann has dismissed the latest stunt by a British comedian during the firm’s Geneva Motor Show press conference – although he adds the brand is not letting up in its efforts to recover trust after the ‘dieselgate’ emissions scandal.

Identified as serial comedy stunt man Simon Brodkin – who showered ex-FIFA Sepp Blatter with banknotes last year and who also attempted to board an England FA flight dressed in the team’s suit – Stackmann said he took the interruption in good faith.

“When he came on stage, I looked at my colleagues and thought, ‘we didn’t do this in rehearsals yesterday…’”.

Stackmann remained relatively unperturbed, though, even managing to make a quip. “It doesn’t need a repair, it’s a perfect car,” he said on stage as security guards casually appeared to escort Brodkin, who was wearing a Volkswagen jacket, away.

Some members of the audience were unaware it wasn’t part of the press conference.

Ironically, Brodkin was attempting to fit his ‘cheat box’ to a petrol-engined Volkswagen Up. It is only diesel-engined TDI models that have been affected by the emissions scandal.

The high-profile interruption hasn’t dented Stackmann’s faith in the Volkswagen brand, four months after he joined the board of Volkswagen Passenger cars with responsibility for sales, marketing and aftersales.

“Volkswagen is a great brand,” he told us, “that needs to change and needs to future-proof itself.

“We are tight on time but we have lots of energy, I am very excited for Volkswagen’s future – but first, we have to fix the five or six million cars on the road (affected by the emissions scandal).

“This is one of the first and quickest ways we can being to rebuild customers’ trust in the Volkswagen brand.”

He also explained the rationale behind removing the ‘Das Auto’ tagline from the firm’s advertising. Today, it’s simply ‘Volkswagen’.

“We have dropped Das Auto because we want to go back to being a people-first brand. Volkswagen is a lifelong companion: we have to return it back to being the ‘people’s car’.” 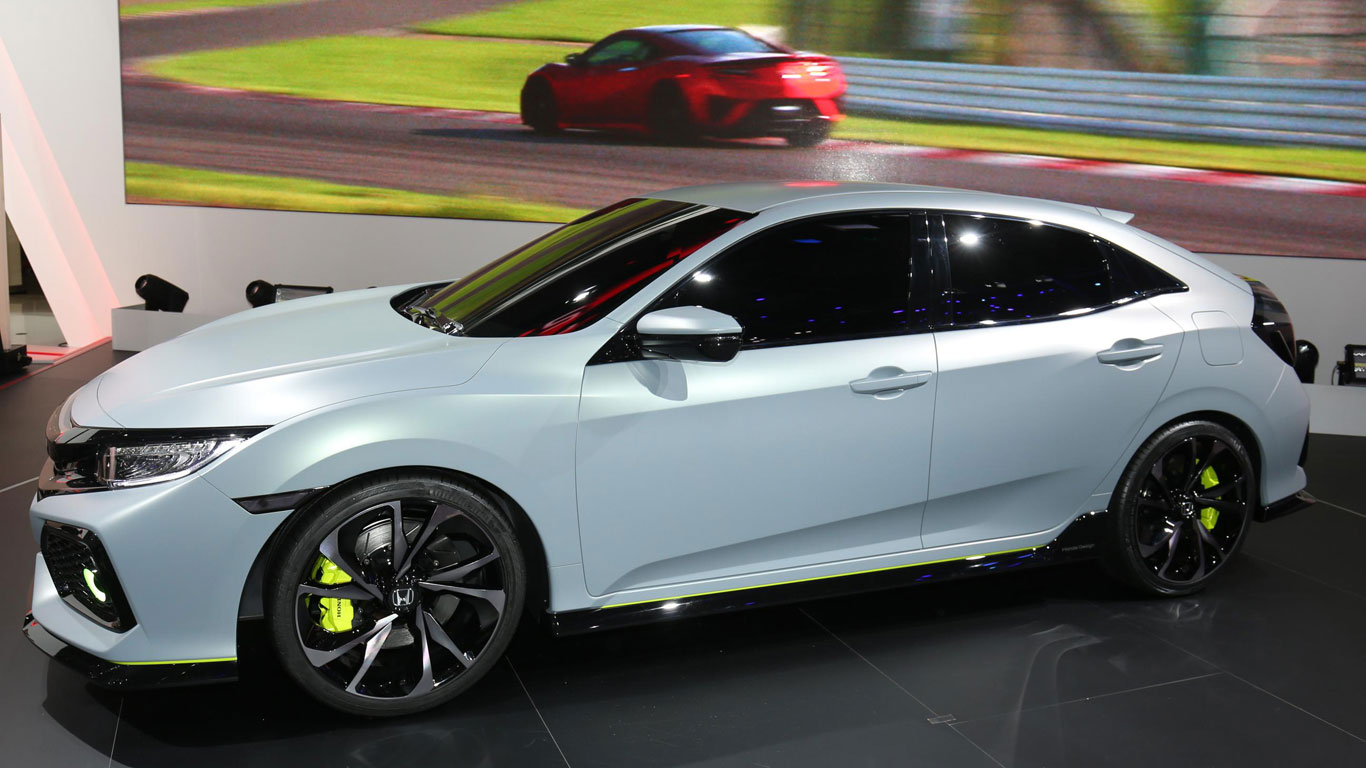 The 10th generation Honda Civic is able to be significantly more stylish and sporting than today’s car because the model is traditionally the one where Honda experiments and tries new things – so does not suffer the generation-shift restrictions rivals such as the Volkswagen Golf do.

“The Civic has always been the Honda where engineers are allowed to try new things,” said the car’s chief designer, 39-year-old Daisuke Tsutamori.

“If you look at its history, it usually always looks different generation-to-generation. There’s always something new.”

The exception to this was the Golf-style evolution from the eight generation model to today’s ninth generation car – something Honda admits was driven by older customers’ preference for more of the same. This may have been a mistake, the firm now concendes. “The 10th generation model is designed to be more desirable to younger people.”

Built on an all-new global platform, the European Civic hatchback is previewed in concept for at the Geneva Motor Show by the Civic Prototype. Some of the more dynamic features won’t make it to mainstream versions of the launch car, admitted Tsutamori-san, but the basic sporting profile is faithful.

“It’s a dramatic change – the proportions are lower and wider, and the rear is much more inclined, almost a coupe silhouette. The overhangs are short and the focus is the centre of the car, which we think exposes its dynamics.”

Tsutamori-san admitted the style change wasn’t easy to get past Honda management though. “Management is not the youngest, and they were very concerned with ease of use, such as getting in and out.” Thanks to careful (and canny) design leadership on Tsutamori’s part, management’s concerns were eased when they got hands on with a full-size prototype.

“It may be sportier-looking, but we haven’t forgotten practicality,” said Tsutamori-san. “Our development principal is MM – machine minimum, man maximum,” an edict faithfully applied to the new Civic.

“Even boot space has increased over the current car” – and that’s despite the new 10th generation Civic returning to a high-tech multi-link suspension setup at the rear. 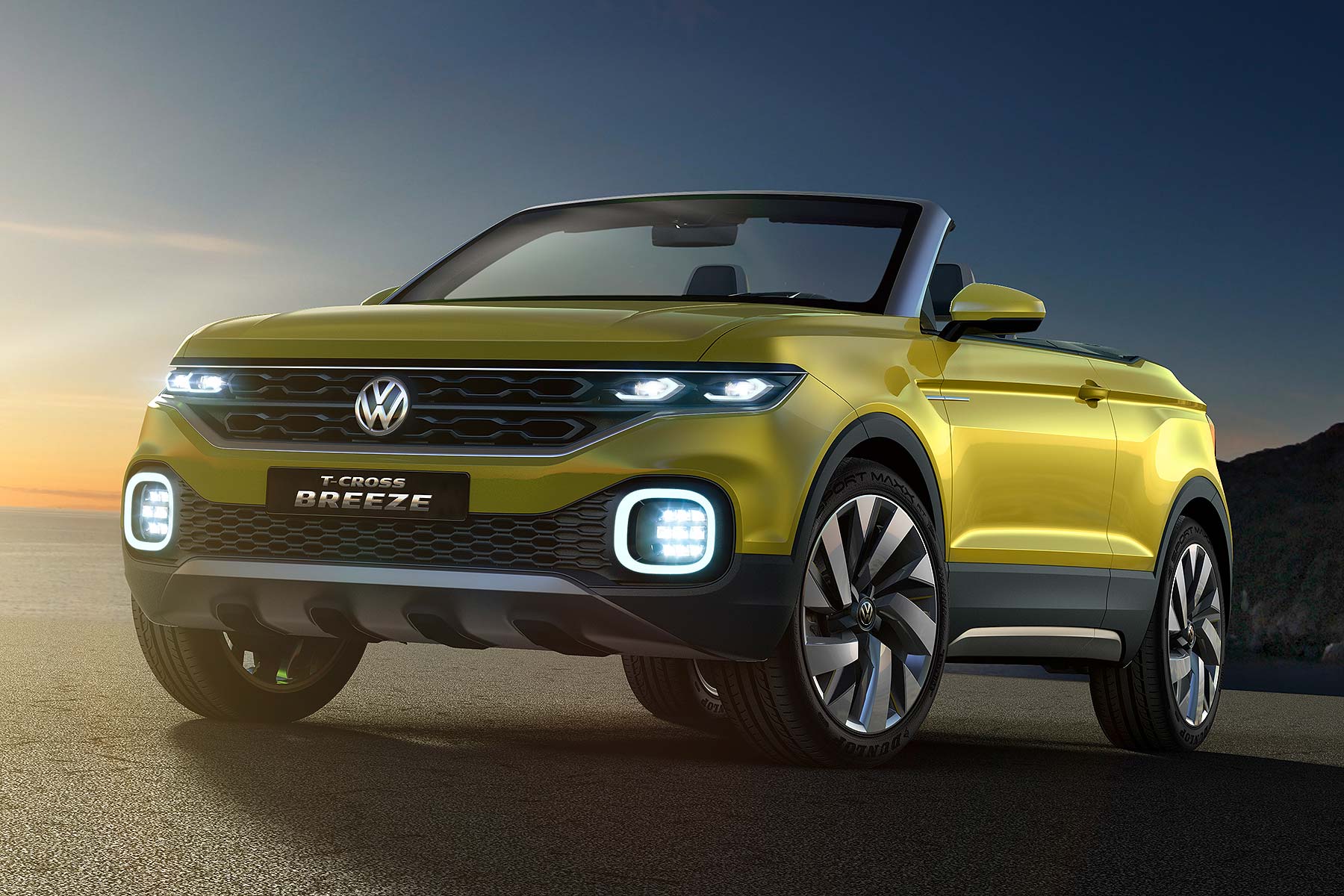 Volkswagen has vowed to build an SUV in every class of car that can justify one – and the T-Cross Breeze concept at the 2016 Geneva Motor Show is the first salvo in an off-roader onslaught from the German brand.

“SUV is THE segment globally at the moment,” Volkswagen board member for sales and marketing Juergen Stackmann told us. “We compete in it with the Tiguan, but this leaves two or three cars on the upper side: the Tiguan LWB, US-built large SUV and the range-topping Touareg.

“Below the Tiguan, we believe there is space for two more SUVs: the T-Cross will sit at the smaller end – and will arrive in the not too distant future.”

The product offensive will begin in the spring, when the all-new Tiguan launches in Europe (later followed by a long-wheelbase version for North America). Work is progressing fast on preparing the US Chattanooga factory to build the production version of the CrossBlue.

The new CrossBlue will be a genuine SUV range-topper, built on the same platform underpinning the Audi Q7 and Bentley Bentayga.

Volkswagen has revealed the entry-level SUV will be built on the Volkswagen Polo platform, while the family-sized one will use the MQB architecture underpinning the latest Volkswagen Golf.

From MPV to SUV

The growth of SUVs is coming at the expense of the MPV, said Stackmann. There’ll always be a market for practical vehicles, but it’s not one that will grow – because SUVs have taken on many of the characteristics that appeal to MPV buyers, such as space, a high seating position and functionality.

“MPVs were too rational. SUVs give drivers character.”

Volkswagen thus plans not to invest too much time and effort into MPVs in the future – and Stackmann even questioned attempts by rivals to make MPVs more stylish and sporty. “Is the compromise too much?”

Renault is, notably, the brand that invented the compact MPV, and with the latest Scenic has given us arguably the most stylish small people carrier yet. However, designer Laurens van der Acker has previously admitted that if this generation of Scenic doesn’t work with customers, the firm won’t continue with it…

With the new Bugatti Chiron, the world has a new hypercar benchmark…